Do you have a problem? Here is the place to appeal for help
Post Reply
11 posts • Page 1 of 1

Was after some advice, i'm designing/building my new line and have decided on a dog bone shape. But i don't want double tracks on the the main straight as i don't think this looks right for narrow gauge. I am thinking of doing sprung/ automatic electric points. has anyone tried this before with any success? Any advice/knowledge would be great.

I am using the same track as you and have sprung points so that they always are set in the same position every time. This is useful on a dog bone as the trains will always go the same way round.

If your line is raised you can simply put a bolt through the centre of the draw bar of the point and attach a spring. The other side of the spring is the screwed in place after you have tinkered with the amount of tension you require for the point to move back into place.

I have had this set up for a couple of years now outside with no issues even with rolling stock that is not weighted.
YouTube Channel
Top

Or with no moving parts... 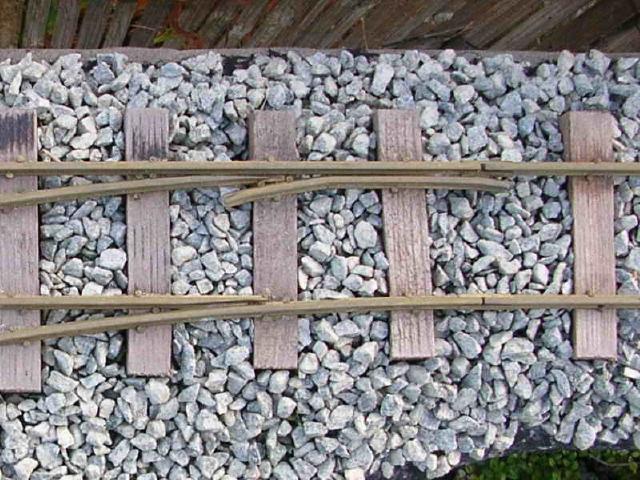 Tony W that is certainly an interesting design i may try that! Is there a design anywhere and how well does it work?

Tom Tom, i am using ground level screwed to bricks so ma have to move the spring to the side

Maple:101316 wrote:Tony W that is certainly an interesting design i may try that! Is there a design anywhere and how well does it work?

I don't know of a design as such ... you just have to get some rail and sleepers and make them! They work well.
Tony Willmore
Rhos Helyg Locomotive Works: http://www.rhoshelyg.me.uk
Facebook: https://www.facebook.com/RhosHelygLocoWorks
Top

That is very clever and almost too simple.
Regards
Andy McMahon

I take it leads in on the straight and out on the curve?
Thought I better check.
Top

Maple:101331 wrote:I take it leads in on the straight and out on the curve?
Thought I better check.

I got a return loop and what i did with my peco points in make the spring a bit weaker by bending it a bit..trains go 1 way come back and change the points ok even some of the wagons when pushed will change the points
Top

Tony. I'm now building my second set of points to that desiginas the first one tested really well. A running Line soon. Dam me building most of my own pointwork
'Professional Bodge artist '
Top
Post Reply
11 posts • Page 1 of 1