A place for discussing battery-electric locomotives, whether they're diesel, steam or even electric outline
Post Reply
15 posts • Page 1 of 1

Over the summer, on days when it was too hot to work outside on the track, I started building a little battery powered Gang Motor and a matching trolley for one of the TVT track gangs.

Nothing complex, but it used up some spare IP engineering wheels and axle box castings left over from older projects. I also wanted to try a drive system that was a bit more sophisticated than the one used in Ivan's Ezee range of kits.

Building finished back in February, but it has taken until now to finish painting and decalling the model. The original plan was to build two of them, but that didn't happen.


The first photo shows the first drive train and associated electronics assembled for testing, showing the underneath of the chassis. The motor is a small 6V MFA-Como geared motor, with plastic mitre gears and my simple transistor speed control. 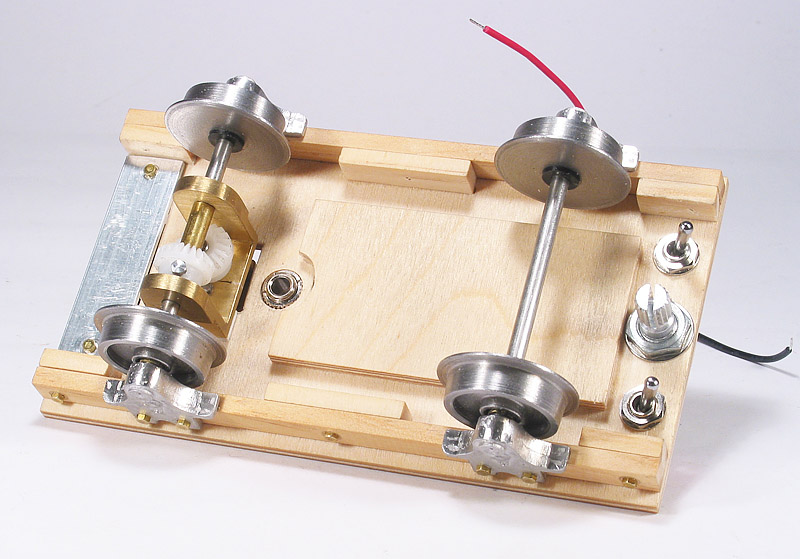 The gearbox is machined out of a lump of brass and the gears are 0.5Mod mitre gears, which were the smallest I could find locally. The speed control, reversing switch and on/off switch are to the right and the charging socket is between the gearbox and the battery well.

The next photo shows the chassis from above. From left to right are the speed control board, motor, charging socket, battery pack, speed control and switches. The battery is four AAA size NiMH cells. The yellow disc is the PTC resistor that acts as a 1amp resettable fuse, limiting current from the battery if a short occurs. 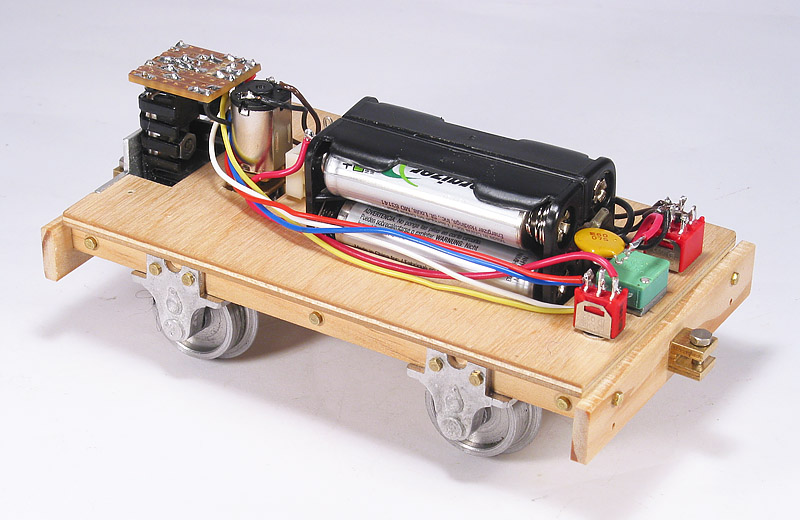 On investigation, it turned out the motor starting voltage was about 4.5V. So with a 4.8V battery and the voltage drop through the drive transistor, the motor never saw enough volts to start. Back to the drawing board.

The next photo shows the solution, using just an on/off switch and a reversing switch instead of speed control. With this arrangement, the chassis trundled around at about 10 scale mph, although the acceleration would give a dragster a run for it's money. With the drive on the front axle, it can't do a wheel stand though.

Before anyone asks, lithium batteries are not the answer, as they won't fit in the space available, which is 25mm x 25mm x 100mm and also contains the motor, charging socket and switch panel. 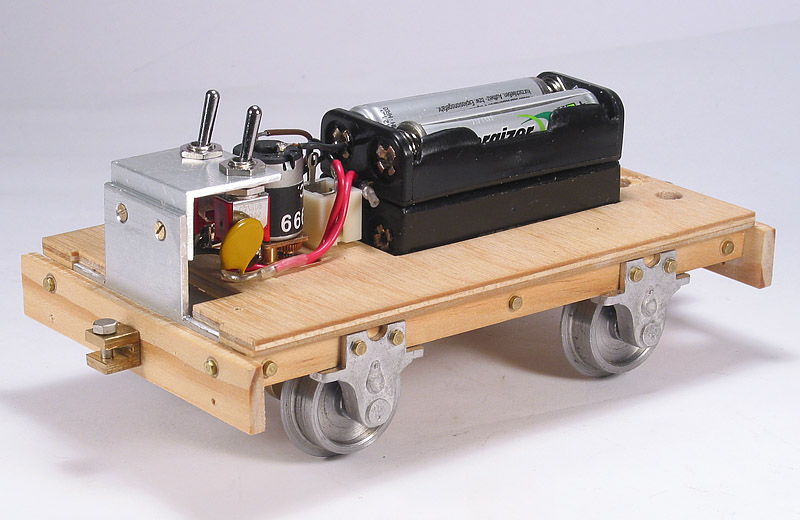 With everything running, the next job was fitting some bodywork. The drive is small enough to fit into something resembling a VR NKS narrow gauge gang motor, but I decided to fit some weather protection for the TVT track gang and the body work was made to resemble the works motor that runs the weed killing train.

The next photo shows the chassis fitted with it's wooden bodywork, made from thin ply and clear pine sawn to size on the little bench saw. 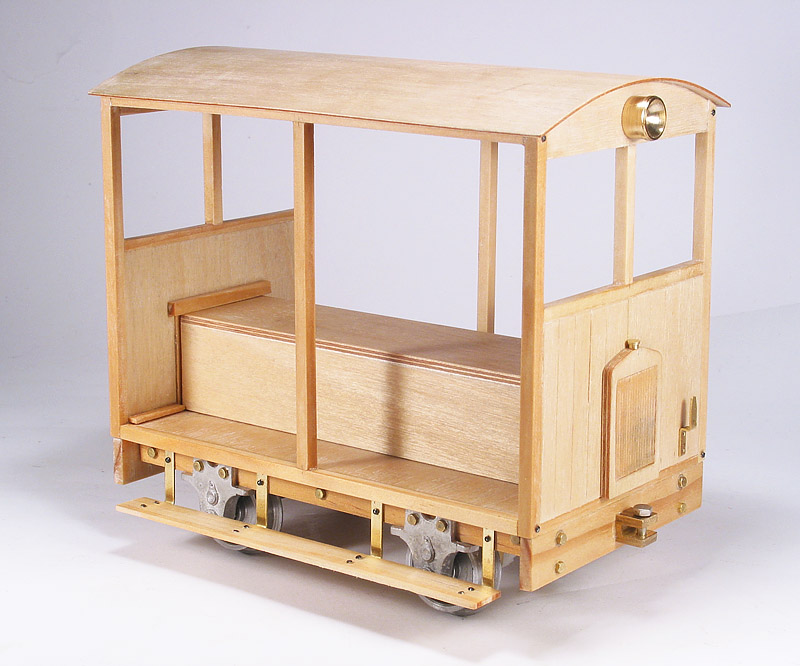 A gang motor needs a trolley for carrying replacement sleepers, tools and anything else needed for routine track maintenance, so the remaining parts went into a simple flat truck to match the gang motor. This took all of a couple of hours to assemble, much of which was spent scribing a piece of ply for the deck. 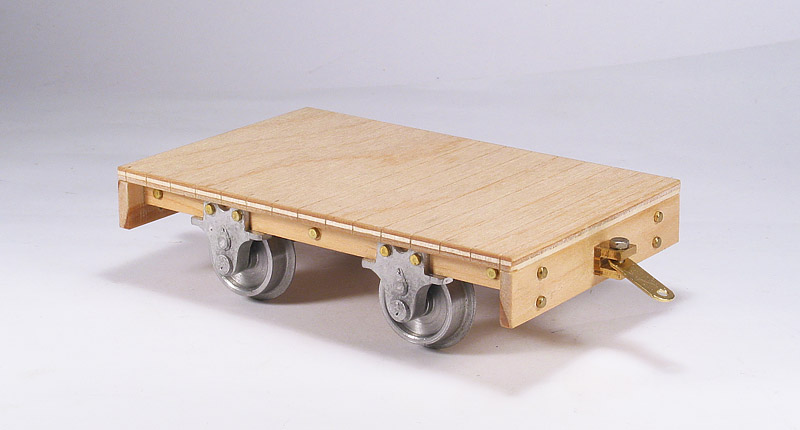 That was where things stopped for several months, but while waiting for the arrival of the electronics to convert the new Walker railcar to battery power, I decided to finish the model off over the weekend and since it wasn't raining it ran trials today.

The first photo shows the portrait shot of the finished gang motor and it's trolley. 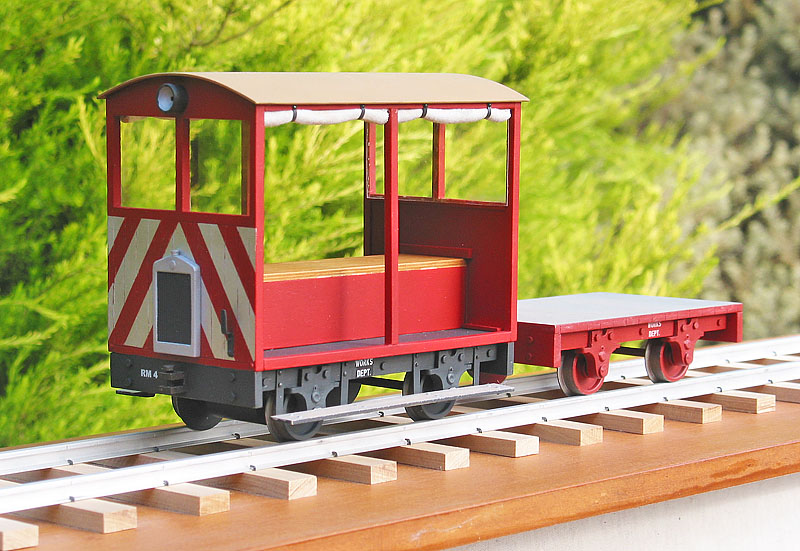 The last photo shows it trundling around the track at about 10 scale mph. The driver figure is 1:20.3 scale and shows how small this thing is. The sun also put in a short appearance during the run. 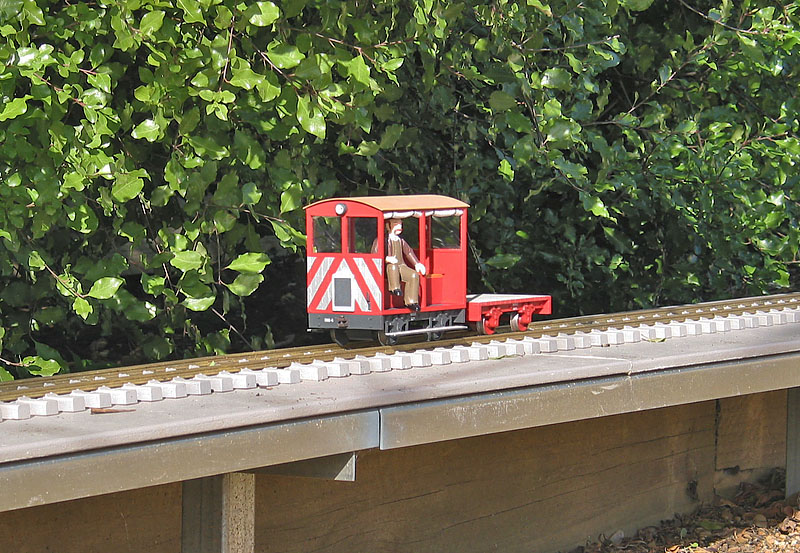 An interesting exercise, but one that didn't work out entirely successful. In retrospect, it would have been better to use a 3V motor and MFA-Como do have a 3V geared motor of the same size as the 6V ones, but the local distributor doesn't sell the gear ratio needed. I've since worked out how to swap the motors between gearboxes, so if I build anything similar in the future, I'll try the lower voltage motor, as there is already a spare speed control.......

The current drive runs OK and being simple to use keeps the kids amused, but while spur gears are more efficient than worm gears, it sounds like a mobile chaff cutter when running. The motor looks small even by HO standards, but the gearbox ratio means it is more powerful than it looks. If it meets an obstruction the driving axle will slip and not stall the motor. The gang motor can pull the weedex train without any strain on reasonable gradients, so it doesn't notice the little 4 wheel trolly as a load.

If it is noisy then you have some end float in the axle which causes the gears to not mesh properly.

Busted Bricks wrote: ↑
Sun Jun 16, 2019 6:53 pm
If it is noisy then you have some end float in the axle which causes the gears to not mesh properly.

End float in the final drive is controlled by brass spacers to keep the gears in mesh and is maybe a couple of thou., just enough to ensure nothing binds. The drive axle is only running at about 250rpm and the gears are plastic, so more or less silent when run on their own out of the model.

The noise comes from the gearbox and motor. The motor is only 12mm dia. and at 4.8V is running at approx. 15,000 rpm. The gearbox is a 60:1 reduction in 4 stages, all straight cut metal pinions. The gears are well meshed and there is little backlash in the gearbox, but definitely not quiet.

I usually find these small gear motors are very quiet. Does the speed control use low frequency switching? That can generate some noise in the drivetrain.
Top

You could always use a couple of 14500 (AA sized) li ion cells. That would give you nominally 7.4v
A great looking little model.

The small motor on the Heng Long smoke unit I bought was very quiet but the gear train (plastic) made a right noise!
YouTube Channel
Top

Busted Bricks wrote: ↑
Mon Jun 17, 2019 4:39 pm
I usually find these small gear motors are very quiet. Does the speed control use low frequency switching? That can generate some noise in the drivetrain.

The original speed control was a simple emitter-follower transistor circuit, so a pure dc output. The current 'speed control' is an on/off switch.

I looked at the 14500 when I found the problem with the high motor starting voltage, but there wasn't enough space to fit a 2 x AA battery holder. Even the solder tag type made up into a two cell pack was slightly too large.

I could also have slung two more AAA NiMH cells under the floor for a nominal 7.2V.

Both options required body and/or chassis reconstruction and would have changed the model proportions, so I took the easy way out and fitted switches.

I've found I don't need to adjust the speed of the other small rail motors once they are moving, so the absence of speed control on this one is not a problem.

Oily Rag wrote: ↑
Tue Jun 18, 2019 11:25 am
But for future projects like this one I would consider the Tamiya educational motor gearbox kits.

The Tamiya kits are available locally, but the ones I looked at some time ago were too large for small 1:20 scale models. The range seems to change frequently and they've introduced some smaller ones since then. The motors are light duty Mabuchi ones and won't last long in heavy service. I've seen 80 hrs quoted as the lifetime before they wear out, shorter if run at voltages higher than 3V.

They seem to do the job perfectly and fit in the smallest of spaces.

Looks great and will probably use this motor setup in a few of my future scratch builds as I was looking for how I could do this.

The Beaudesert Shire Tramway had one of those that they bought second hand from the QR and used for passenger and mail traffic.

It looks similar in size to the VR NKS gang motor. There are a couple of those preserved in working condition at Puffing Billy.

Easy enough to motorise a model in 1:20.3 scale, but adding the batteries as well is a different proposition, as I found.

A VR NKS gang motor when modelled in 7/8" scale works out to about the same length as the little motor I built, so even in 7/8" scale, space will be tight.

They aren't available locally, but the slightly smaller 16340 Li-ion cells are available and they don't fit the model as it stands.

There is a 10440 Li-ion cell, which is a direct AAA replacement, but it's another one that isn't available locally and the low capacity and limited max. current draw would probably rule it out anyway.

When I get the time and inclination, I'll bench test the 3V version of the motor and see if that will work with the simple speed control and 4 x NiMH AAA cells. If it does, I'll change over the motor and refit the speed control, as that doesn't involve remaking the bodywork.

Hi Graeme
I managed to squeeze a couple of 14500s under the frames on one of my IP Engineering builds. Not sure if you have a similar amount of space on your speeder, though 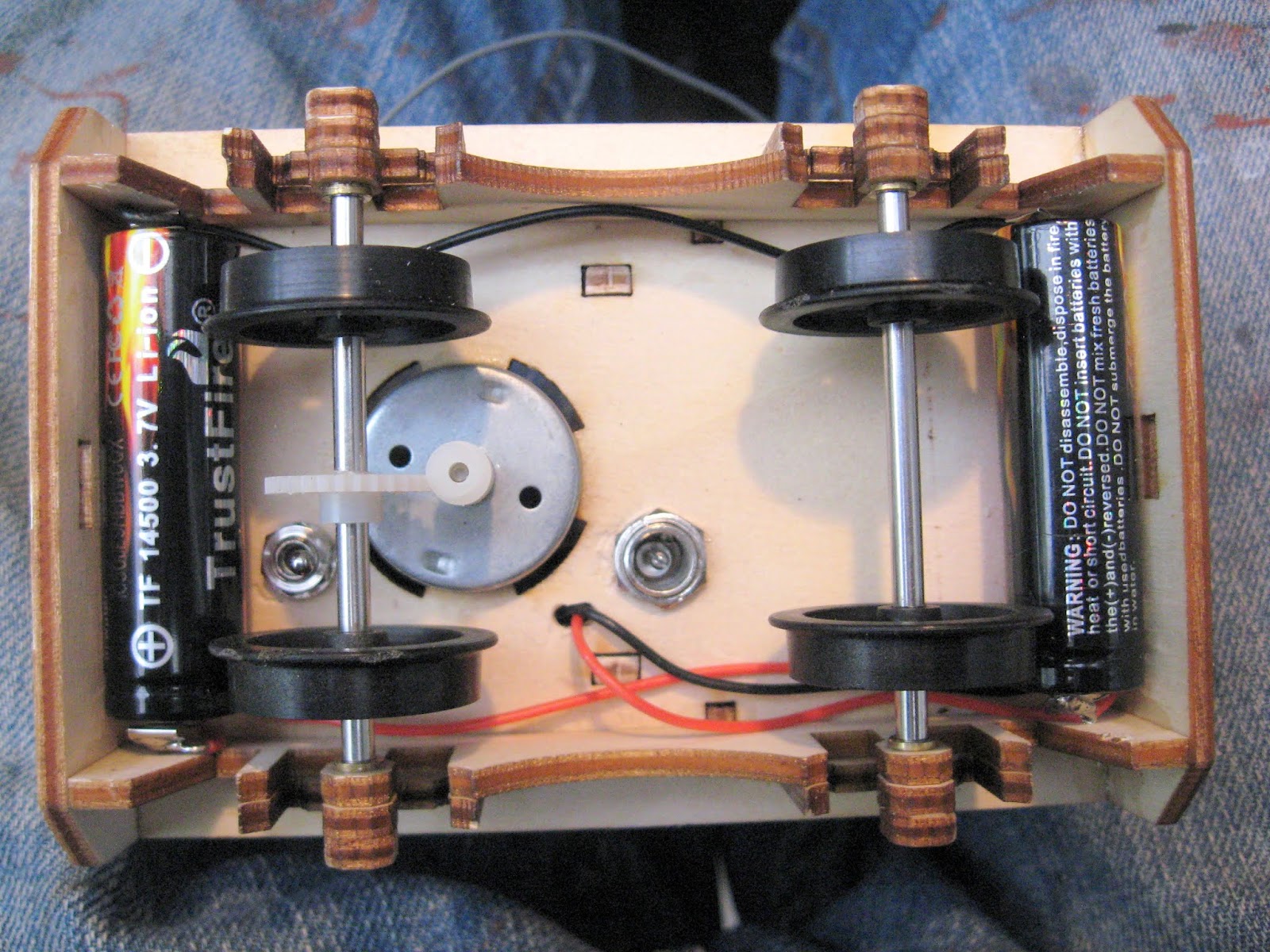 ge_rik wrote: ↑
Fri Jun 21, 2019 3:59 pm
I managed to squeeze a couple of 14500s under the frames on one of my IP Engineering builds. Not sure if you have a similar amount of space on your speeder, though

Not enough space in that area of the model for the AA size 14500 cells, but in any case it is taken up by parts of the speed control when that is fitted.