A place for discussing diverse methods of powering locomotives, such as Internal Combustion, Wind, etc...
Post Reply
12 posts • Page 1 of 1

First post for rather a long time! Well I have a nice little project for the lockdown, there has recently come on to the market an absolutely gorgeous little petrol stationary engine that I feel is just begging to go into a 16mm scale locomotive. It has several characteristics which make it particularly well suited including:
It is also very heavy as it is pretty much solid brass and stainless steel, good for traction at least!

So I could not resist! Here is a video of mine running:

A few observations: It has a wet liner around the cylinder, but the head is not cooled. This is not a problem, because the engine runs very cool and as the brass is both a good conductor and heat sink there is sufficient heat transfer to keep the cylinder head at sensible temperatures. It also means that it's water usage is quite slow as not much evaporates let alone boils. I can get through several tanks of petrol without needing to top up the water. Ignition is provided by a module and a single AA battery concealed in the base.

Now as it happens, it appears to be a fairly close facsimile of a Deutz diesel:

And not only that, but this type of engine has been used in narrow gauge locomotives:

So whilst my loco will be freelance, it is good to know that it is not un-prototypical
It's a Mamod Jim, but not as we know it!

Very impressive piece of engineering, I couldn't use one myself but will be watching with interest, and admiration!
The best things in life are free.... so why am I doing this?
Top

I have to say, that looks superb idea, can't wait to see it being built

Dare I ask the obvious question? How much?

This is the beast:

I got mine a little cheaper than that as I had some voucher codes.
It's a Mamod Jim, but not as we know it!

What a lovely engine

I'm a steam man through and through but this has even captured my attention. I'm also watching with interest.

"Smith! Why do you only come to work four days a week?
"'cause I can't manage on three gaffer!"
Top

As it happened I had a suitable chassis around, albeit with an electric motor in it. The electric motor and its gears were removed leaving a very usable chassis. I have opted to use meccano gears for the transmission, as they are easily available and should handle the load. Being brass they could wear a bit faster, but if they do replacement will be easy if required! It also meant I could research various meccano gearbox and clutch options. The one I based mine on was the "compact three speed and reverse" that I think was published in one of the meccano magazines. However I made it even more compact by altering it to a two speed without reverse, because I wanted a separate reversing gearbox so that it would be two speed in both directions. Finding a suitable reversing gearbox design to base mine upon proved somewhat difficult as most were based upon bevel gears which turned the drive through 90 degrees, and as the engines crankshaft was already parallel to the axle that would have been awkward.

So I developed my own design by having two gear trains on to the rear axle, one with two one inch gears, and one with three half inch gears. Therefore direction is changed by selecting one or the other gear train. The reversing gearbox is under the footplate, and the two speed gearbox will be above the footplate immediately behind the engine. The plan is that this will be concealed under the 'control desk' with gear change, clutch and throttle levers in a realistic place above.

well they say a picture tells a thousand words so...

Chassis with engine mounts and holes for gears 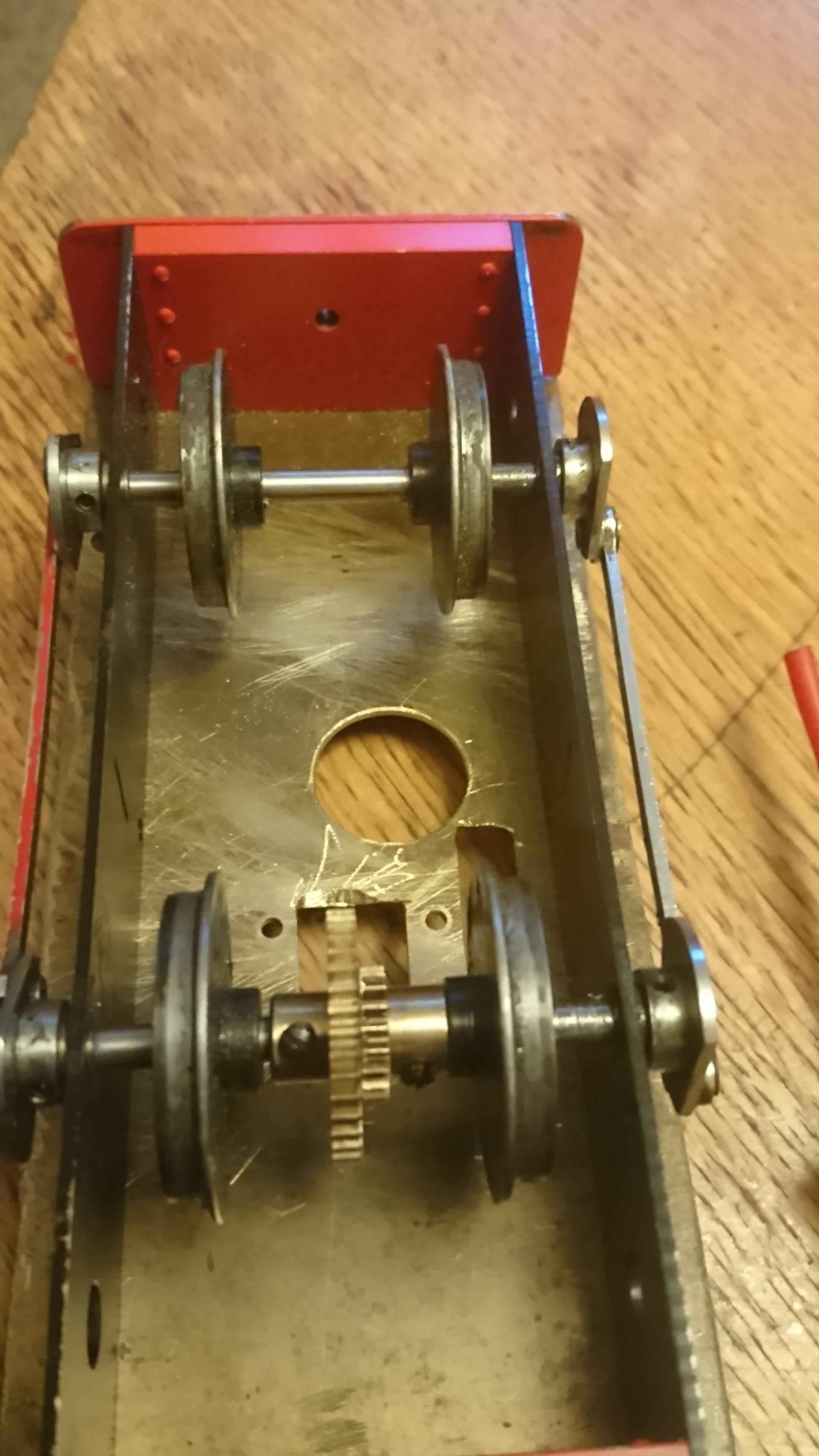 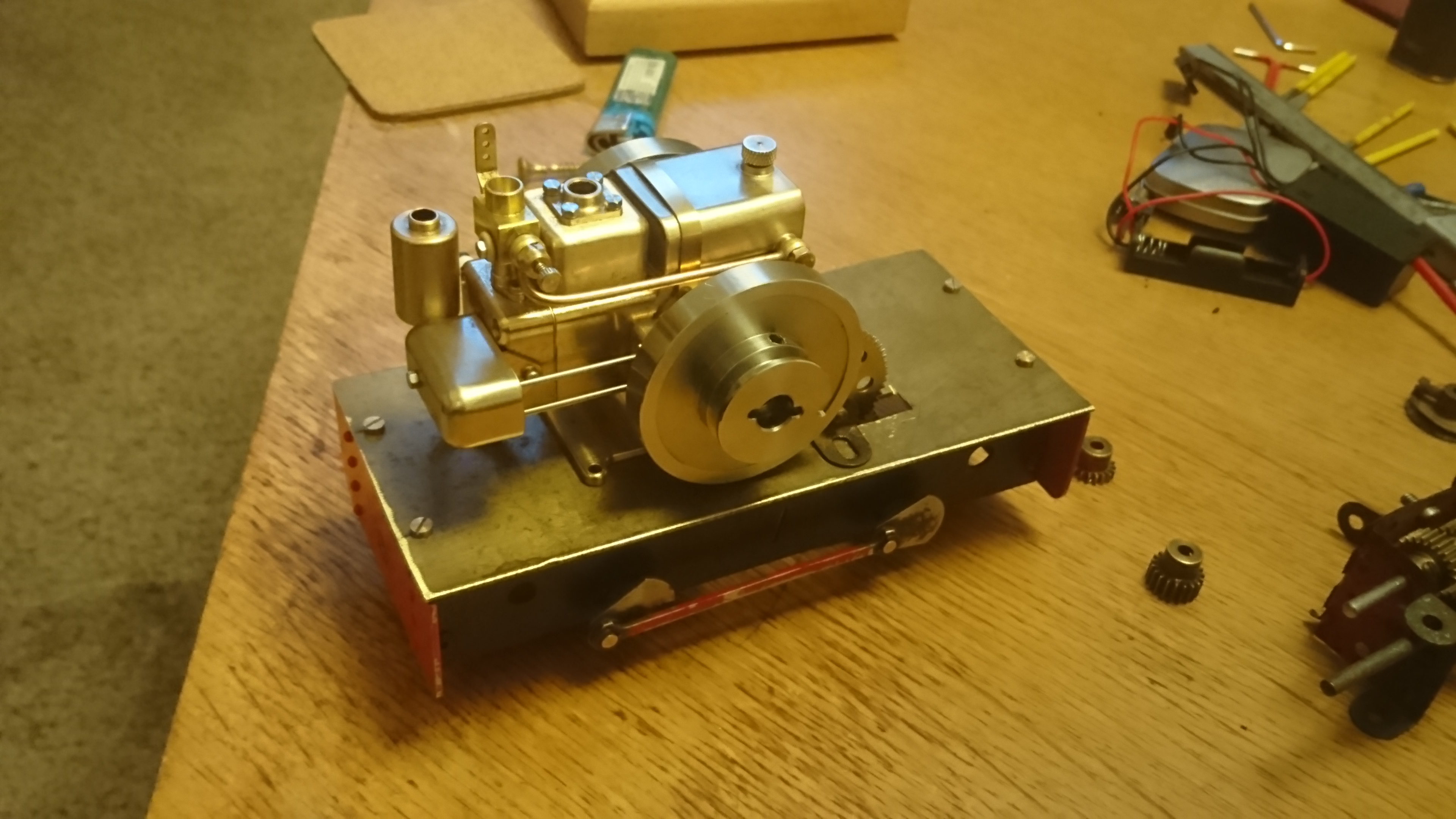 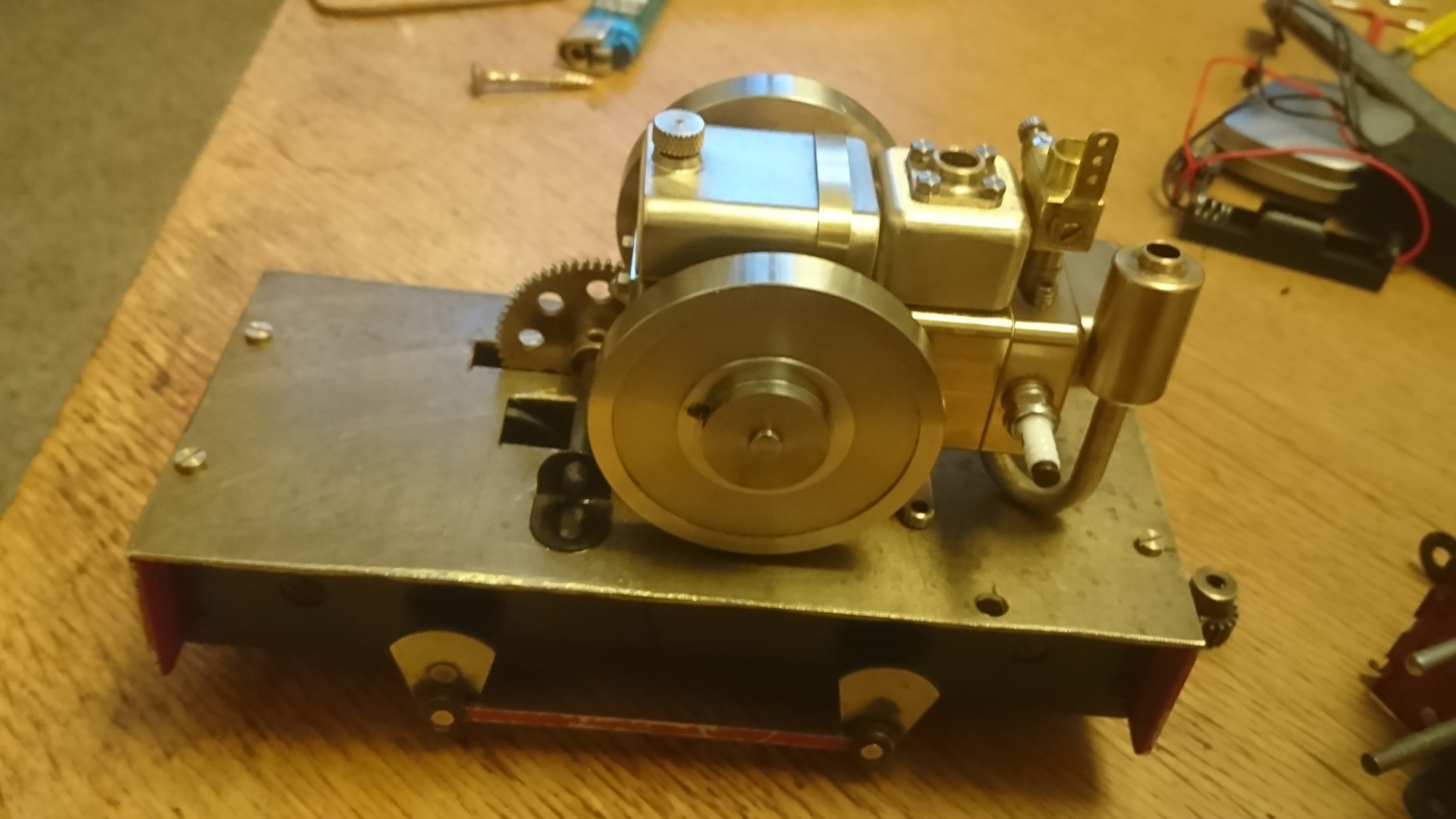 And from other side showing removed flat belt pulley, because it was very wide! 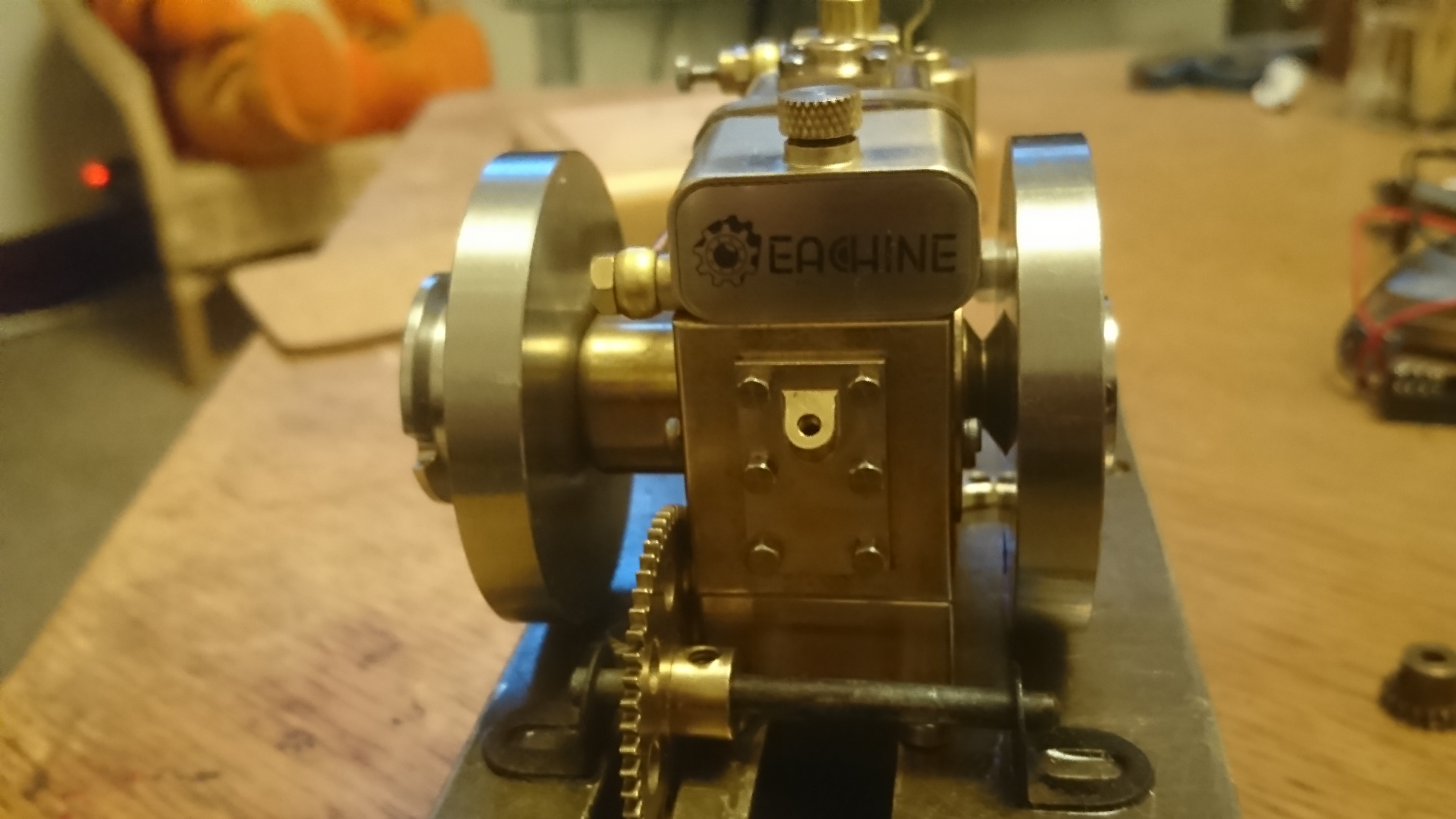 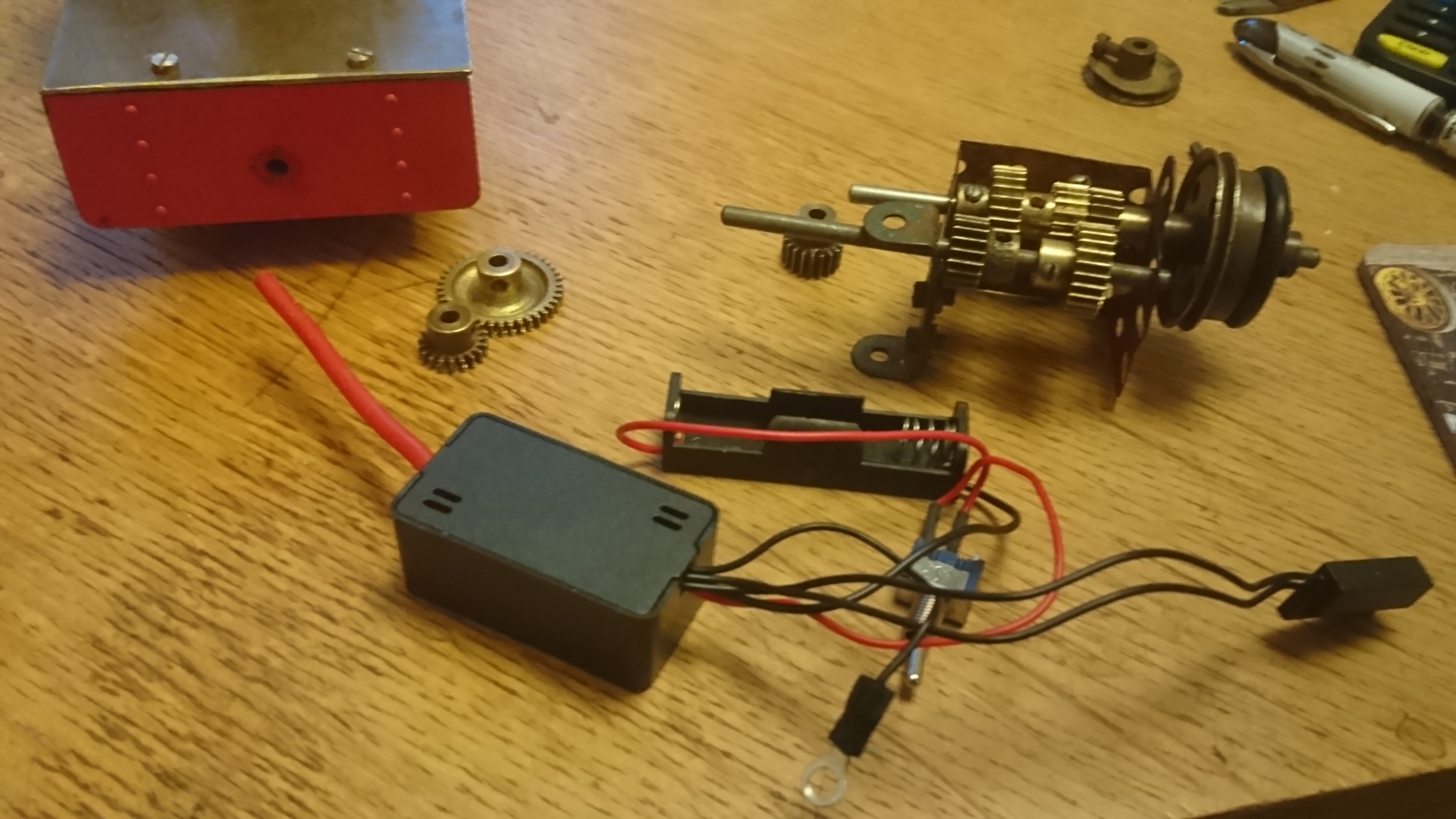 Mock up of two speed gearbox in meccano and ignition components that will be hidden under the footplate. Final gearbox casing to be made from brass once positions are finalised,
It's a Mamod Jim, but not as we know it!

Excited to see how this turns out, beyond my understanding but very interesting!
Top

I'm loving this as an experiment, it looks the part at this stage.
I do hope it doesn't perform like a tortoise and sound like a Ferrari!
The best things in life are free.... so why am I doing this?
Top

No chance! The engine is flat out at about 5,000rpm and tick over around 1,000rpm, possibly less. I did some rough calculations and realised that even in low gear it was only about 7:1 overall, so it would have gone like a Ferrari whilst sounding like a farting tortoise! So an extra gear reduction stage has been included. I am hoping that it will be able to crawl like a tortoise on tickover in low gear, yet manage a decent speed in high without too many revs. It does feel like quite a torquey engine and with those big flywheels it seems to be quite happy at low revs anyway. The two speed gearbox itself has a choice of direct drive for high, and IIRC 1.86:1 in low, so in theory high will be approximately twice as fast as low. There is a little bit of scope for adjusting the overall ratio, but having hopefully a reasonable guesstimate on engine rpm and the rpm of the wheels for going slow or fast, I am hoping that it will not be too far out on speed.
It's a Mamod Jim, but not as we know it!

Excellent work Ian! Look forward to seeing the progress - I may have missed it in my quick skim read but are you adding a reverse gear too?

How are you getting on with your steam launch?
Check out my steam and engineering youtube channel at...