A place for discussing battery-electric locomotives, whether they're diesel, steam or even electric outline
Post Reply
13 posts • Page 1 of 1 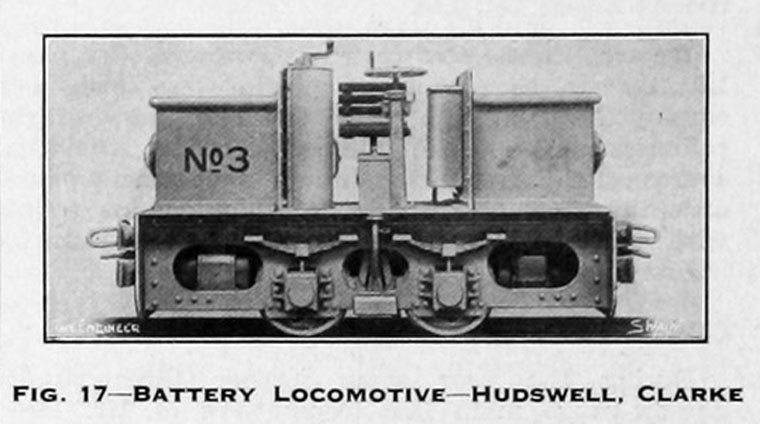 When I saw Mike Pinder's drawings for this loco in May 2019's 16mm today, I thought this it would make a nice quick build, a couple weekends worth of work. 5 weeks later and it's still not done...

I recently got a finer 0.25mm nozzle for my 3D printer, and wanted to see what kind of detail it could achieve. I built a prototype chassis, with an extended motor shaft driving a worm on the opposite axle, like the underside photo of loco in the article. A printed clip on assembly held the worm to the spur gear and gave the appearance of the gearbox from the underside. 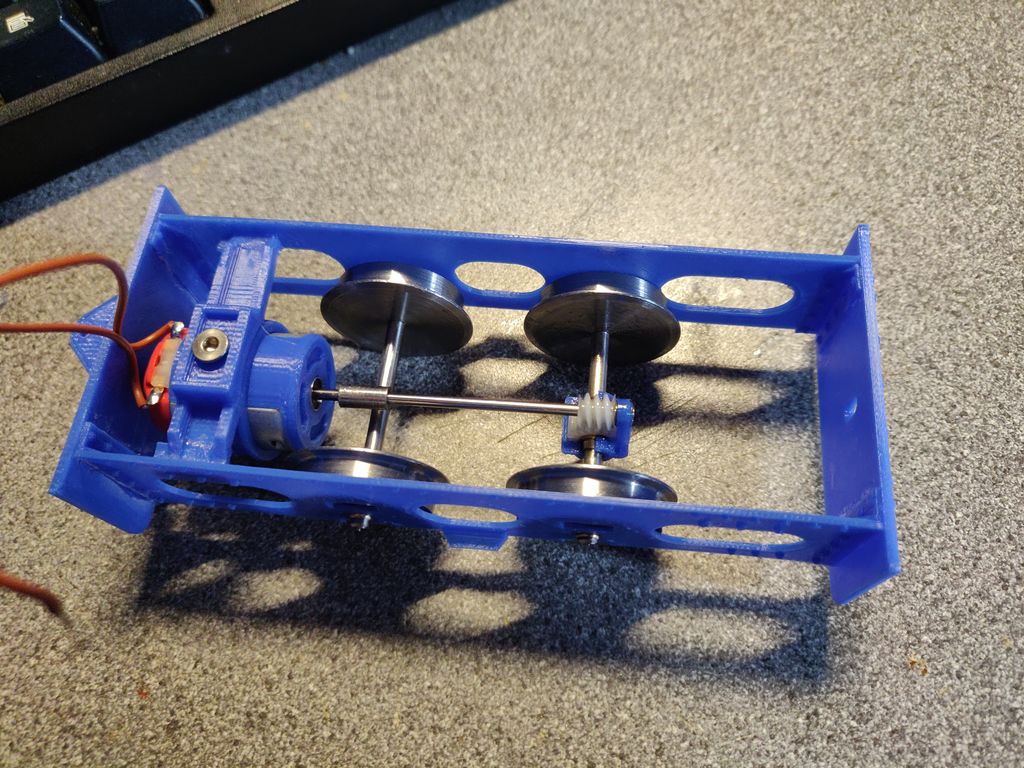 This didn't work. There was too much friction for the little 130 size motor, so I went for a traditional setup, but still with two motors. 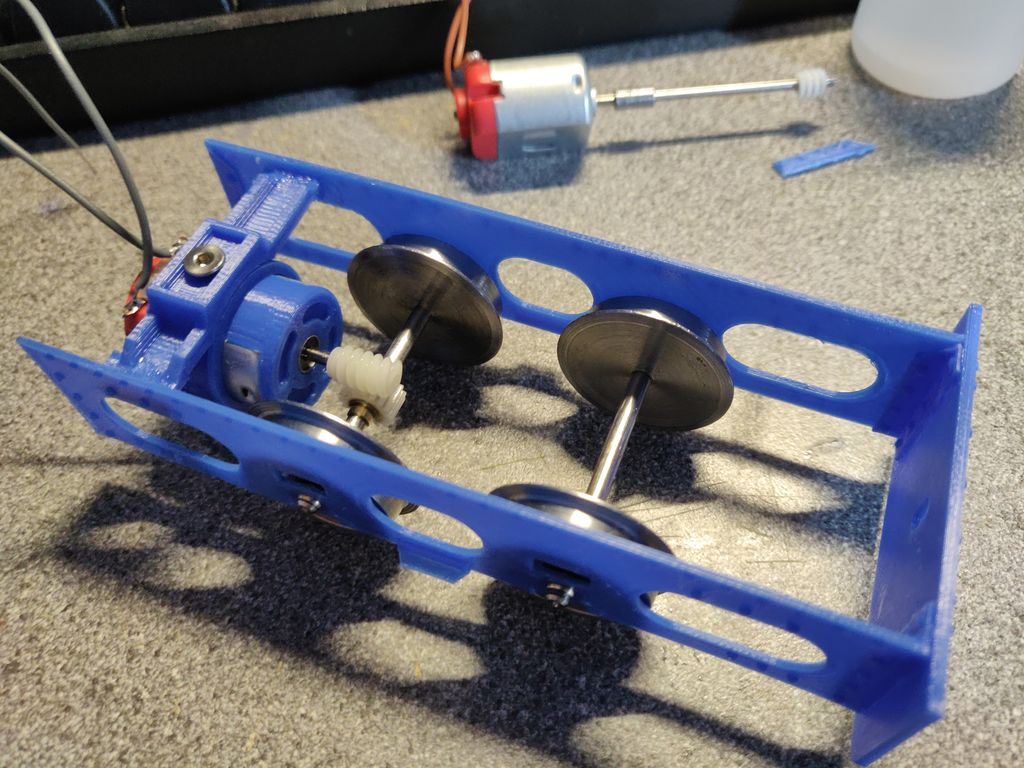 The motors are the type with the flats on each side, so to try and make them look round extra printed bits were added, also used to mount the motors. 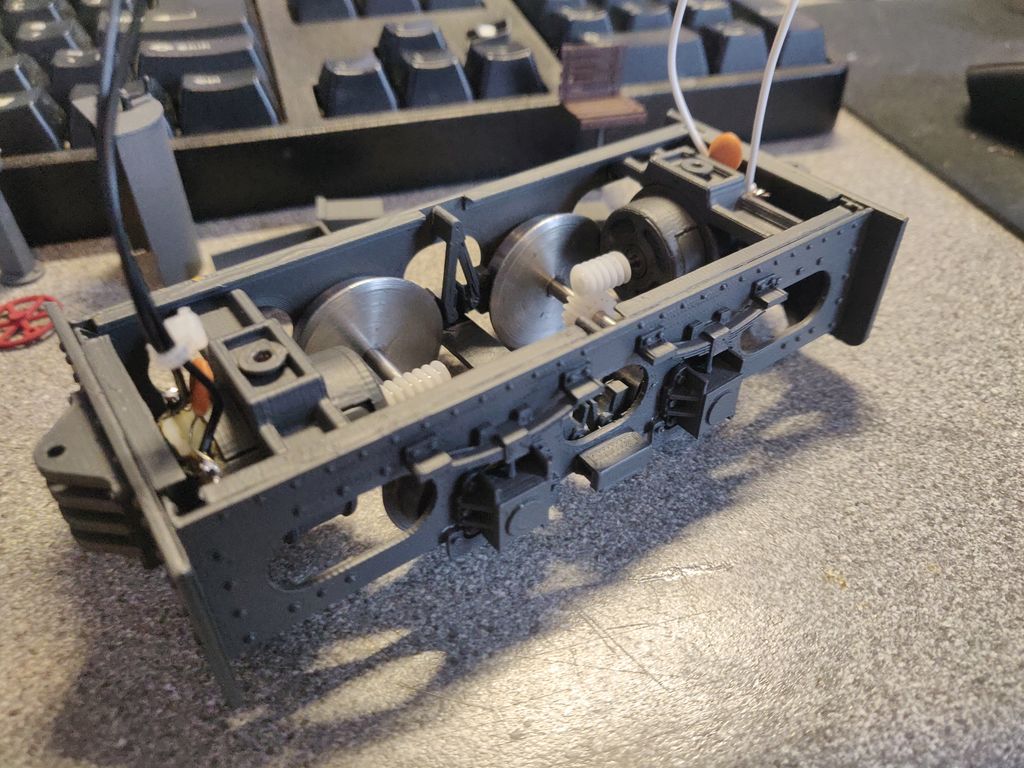 I found a photo of one of the later versions in use, and printed a driver in a similar pose. 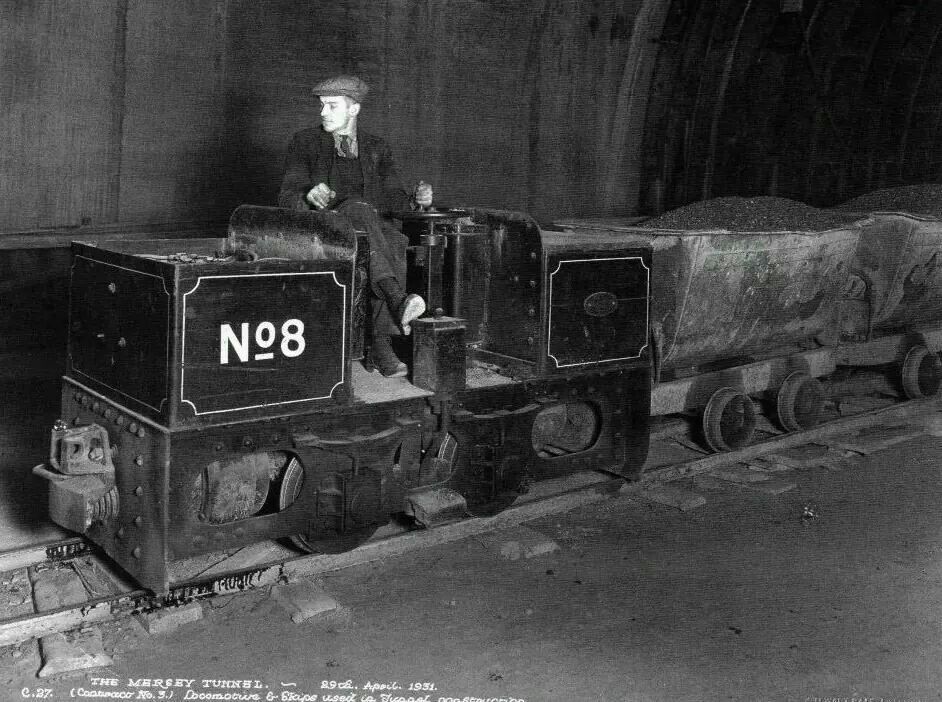 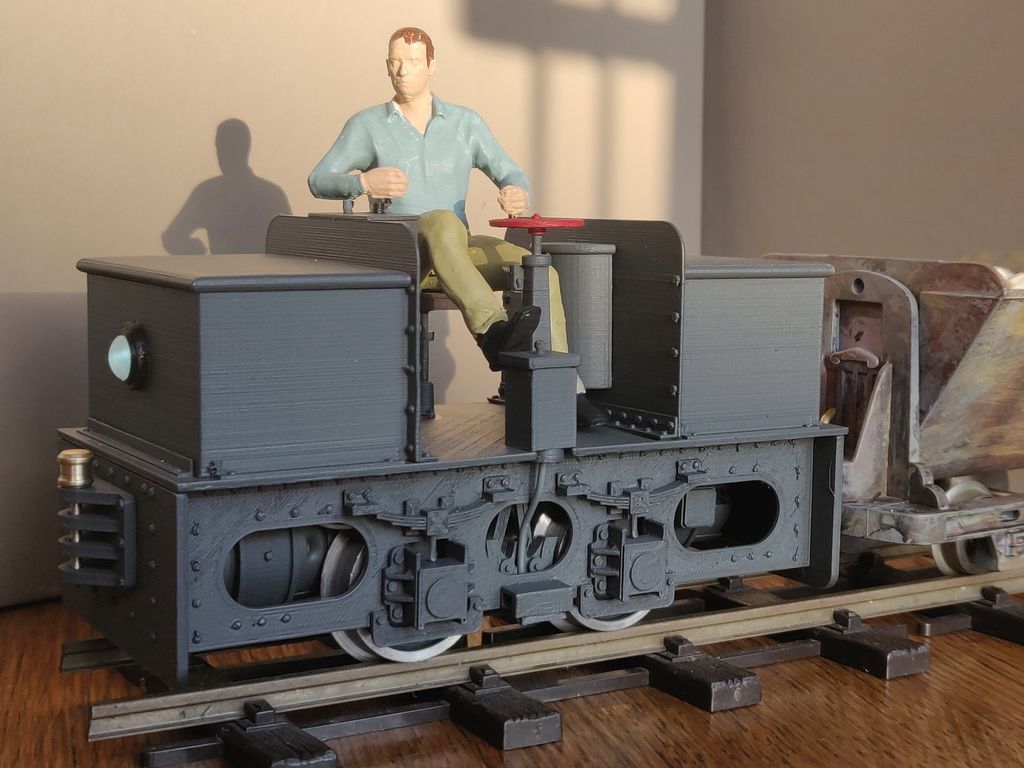 The driver model was generated in a program called Makehuman, loaded into Blender to pose the limbs, and then exported to an .stl for printing. This was my first time doing this - came out OK for a first go, its pretty useful to be able to generate figures in custom poses. 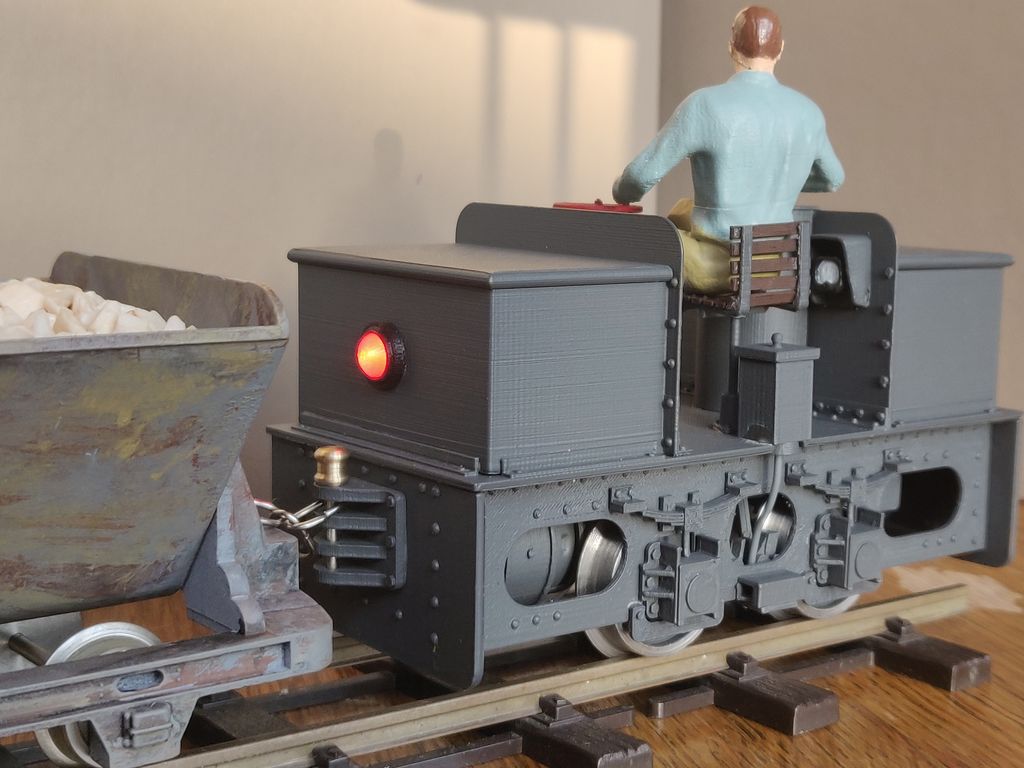 The lights have red/white bicolor LEDs, with the diffuser printed in clear PETG. 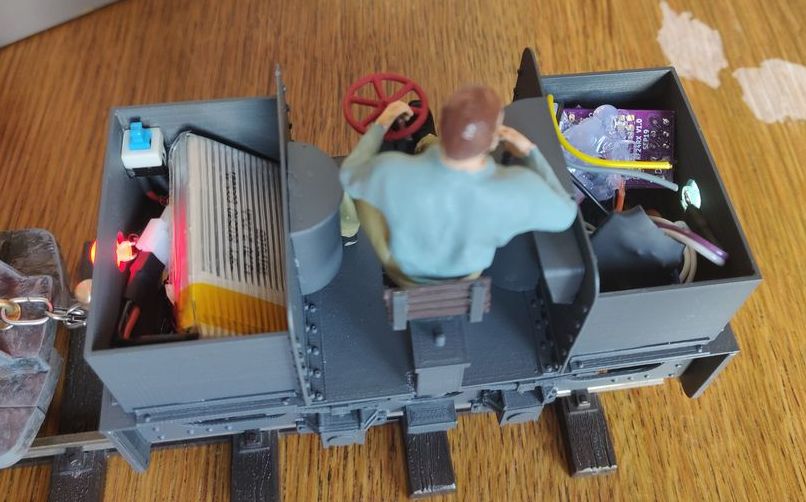 In the back box there is a power switch and removable LiPo battery, and in the front box there is a horrific mess of wires, but an NRF24 based RC system does just about fit.

The 0.25mm nozzle did reproduce a lot of detail, which basically comes for free as it is just copy and pasted in the CAD program, but the defects from it being printed are still obvious. No effort was made to sand the surfaces smooth, the prints were very quickly blasted with a hot air gun to get rid of any hairs of plastic, then painted. The NRF24 RC system seems to work OK, no issues with range have been noticed so far.

Still need to build a proper boxed transmitter for the RC, also plan on etching some brass nameplates for this and other locos.
Top

Brilliant!.... the frame detail is amazing, especially as you have left it untouched out of the printer.
The best things in life are free.... so why am I doing this?
Top

Overall that is a very nice job, although it's a shame that the flat surfaces show so much printer surface defect.

I like the driver. Never heard of Makehuman before but it looks interesting, how difficult is it to actually learn ( as opposed to watching aYouTube video)? You're right, that being able to create/ print custom figures would be very useful.
I did try to learn Blender ages ago but gave up, it's way to complex for my aging brain!
Philip
www.tinyurl.com/philip-trains
Top

philipy wrote: ↑
Sun Oct 27, 2019 7:08 pm
Never heard of Makehuman before but it looks interesting, how difficult is it to actually learn ( as opposed to watching aYouTube video)? You're right, that being able to create/ print custom figures would be very useful.
I did try to learn Blender ages ago but gave up, it's way to complex for my aging brain!

Makehuman is very simple, just a bunch of sliders for different attributes. Short vs Tall, Fat vs Muscular, etc. Really nothing to learn, you make adjustments until you get a body shape you like, then export to another program.

Blender is one of those programs that has so many features you will never learn all of them, you just need to know enough to complete the job you are trying to do. 99% of the buttons you see on screen by default in Blender are not needed at all for posing the driver, but it took me some fiddling with import and export settings to get things like scaling correct.
Top

Yes I've been playing with Makehuman this evening and have a (printable?) basic figure sitting in Cura, so I may try it tomorrow just to see how it looks.

If it's Ok I may give blender another go when I've got nothing better to do.
Always useful to have in the techniques armoury.
Philip
www.tinyurl.com/philip-trains
Top

I really mus play with a 3D printer sometime...

that looks a very loverly loco..i like the driver as well..

Yes that is me in my avatar..

Glad you have left the build without smoothing it. It looks absolutely brilliant. worth making some and selling.....

Had a go at making some brass nameplates for this loco yesterday.

I'm still working on my etching process, but it looks very similar to what you would do to etch a double sided circuit board at home.

I'm using the type of UV resist that comes on a roll, you apply heat and pressure to stick it to your substrate. You expose it to UV light with a pattern on top, where it hardens and turns darker. I used a normal halogen bulb for exposing. Then you wash off the unhardened resist with washing soda to reveal the metal underneath, ready for etching: 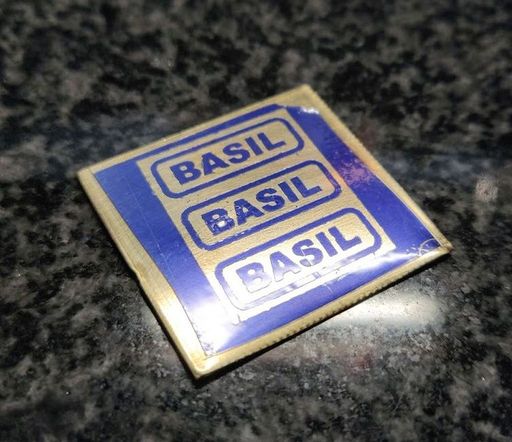 The fact a 3D printer has a temperature controlled flat plate can come in handy for things other than printing. I used it for applying heat to stick the resist to the brass, and for gently warming the ferric chloride etchant while rocking it back and forth. 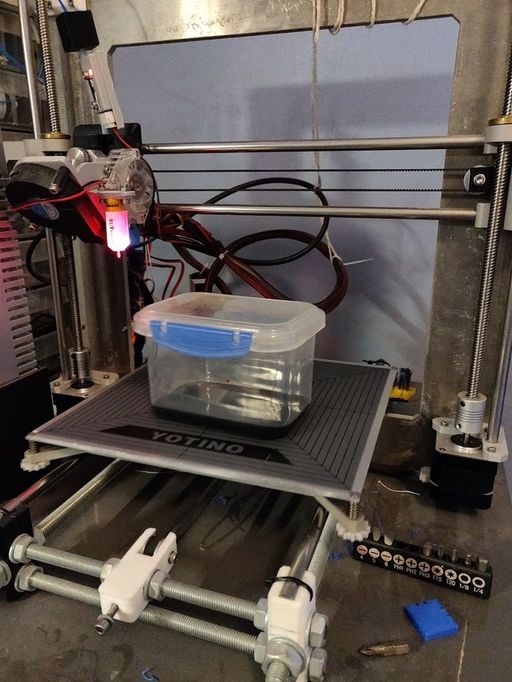 The finished etch here has a few imperfections, I think I took it out too early so the etchant didn't get into the sharp corners of the text, leaving it more rounded. 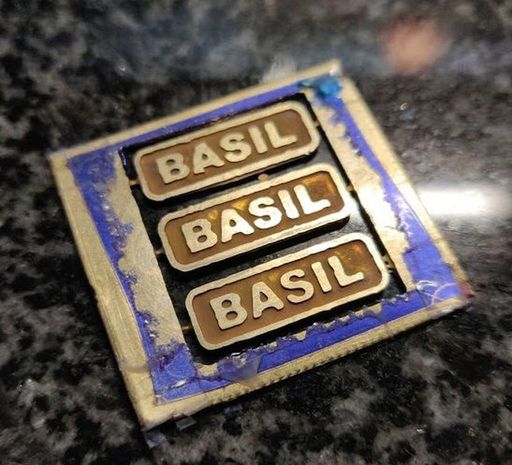 They were spray painted black, and then the paint was sanded off in the high spots. Fitted to the loco: 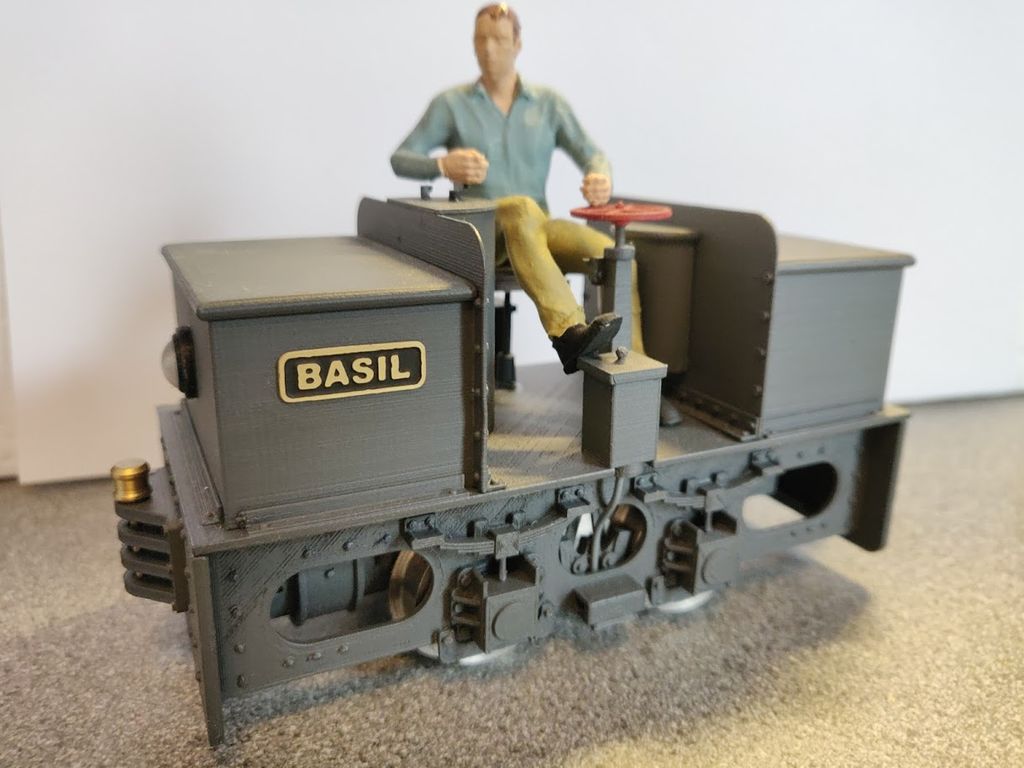 I made three in case one etch failed, but all three came out OK so I stuck the last one to the controller. 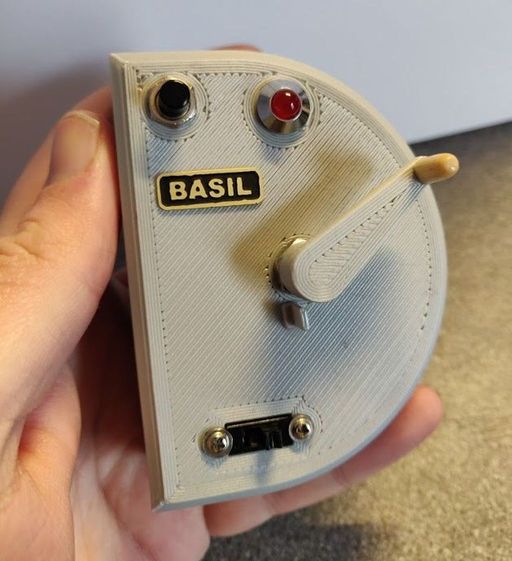 The controller is a bit prototype looking, being unfinished 3D printed parts. It is supposed to be reminiscent of the control panel on the loco itself, and it ended up fitting in the hand quite nicely, you can use your thumb to adjust all the controls. 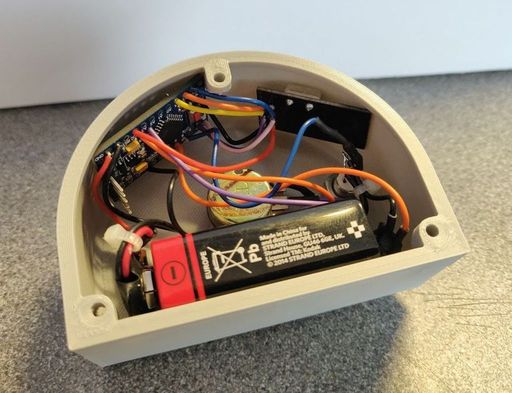 Inside is just point to point wired, with an arduino pro mini and NRF24 board, powered by a 9V battery. Unfortunately, while the R/C system worked great while it was outside the loco and controller, once put inside it's been a bit troublesome. More tinkering required...
Top

I made three in case one etch failed, but all three came out OK so I stuck the last one to the controller.
5.jpg


The controller is a bit prototype looking, being unfinished 3D printed parts. It is supposed to be reminiscent of the control panel on the loco itself, and it ended up fitting in the hand quite nicely, you can use your thumb to adjust all the controls.

Love the controller. The loco is a thing of beauty too, of course, but the controller is the pièce de résistance!
http://moelrhos.uk
Top

I'll second what Philip and Simon have said, a truly professional looking job, both the loco and the controller.
Grant.
Top
Post Reply
13 posts • Page 1 of 1