A place where discussions are about 3D printing.
Post Reply
145 posts

Hi Philip,
A fascinating build and some excellent research on a difficult to track project. The origin of the steam engine fascinated me and drew me down a veritable rabbit hole

I have found many excellent pictures of various launches, but none with the arrangement of a horizontal firebox/boiler. However, one in particular yielded some excellent detail photographs of the various elements of the drive train. I've pasted a link below; whilst it is a vertical boiler, the rest of the components should offer inspiration for any further detailing you choose to do. I'm really looking forward to seeing the finished product!

Thanks Phil. I have investigated that particular rabbit hole myself! I looked at the StationRoad Steam site as well. TBH, I'm not aiming to get that detailed, as long as it looks something like, that will be good enough for this one. It's only a bit of fun and I'd guess won't really get much of a run.
Philip
www.tinyurl.com/philip-trains
Top

Fair enough if you've already been there

At 50', with a 100hp steam plant and a water speed of +20 knots, the preserved Consuta is a bit bigger than the machinery in the little loco, but it shows the sort of thing I was suggesting.

This is not a putt-putt work boat like the African Queen with a vertical boiler and a single cylinder engine. More an expensive toy for the late Victorian chinless classes to hoon around in on the river.

The printed engine looks about right to me for what it needs to do. Unless we keep our inner finescale modeller on a short leash we never finish anything.

Thanks once more Graeme.
Yes that does look generally similar to what I've printed. The backhead also looks very similar to the loco, which is reassuring. I've been trying to draw the pipework ( a representation again) based on the photo. It's drawn, stl'd, and sliced, but awaiting printer time later on today hopefully, to see if it works. However the slicer kept objecting to the fineness of what I was wanting to print, so I don't have a lot of optimism.

There are reasons why I use soft copper wire for pipework, not all of them because of my allergy to CAD software.......

If all else fails, print out a bending jig for shaping the basic pipework parts and print separate fittings like flanges and valves to thread on the wire.

Yes, I was planning something on those lines. Printing the whole thing was always going to be optimistic, but worth a shot.

In the last year or two there have been a number of fairly well publicised 'colourisings' of black and white films and photo's. You may or may not know that there is a Family History/Genealogy site called My Heritage and one of the tools that they offer is a colourising service for old family photo's.
Now I've been musing about what colour to paint 'the beast' when I get that far and it suddenly dawned on me that the crew in the photo might be ancestors of mine who need a bit of colour in their lives and if they did, their chariot might get accidentally coloured at the same time!!

There is also a 'sharpening' option which I applied as well.

So this is the result. I have to say that I'm mightily impressed at the entirely plausible result, just starting from the standard big picture that Rik posted originally. 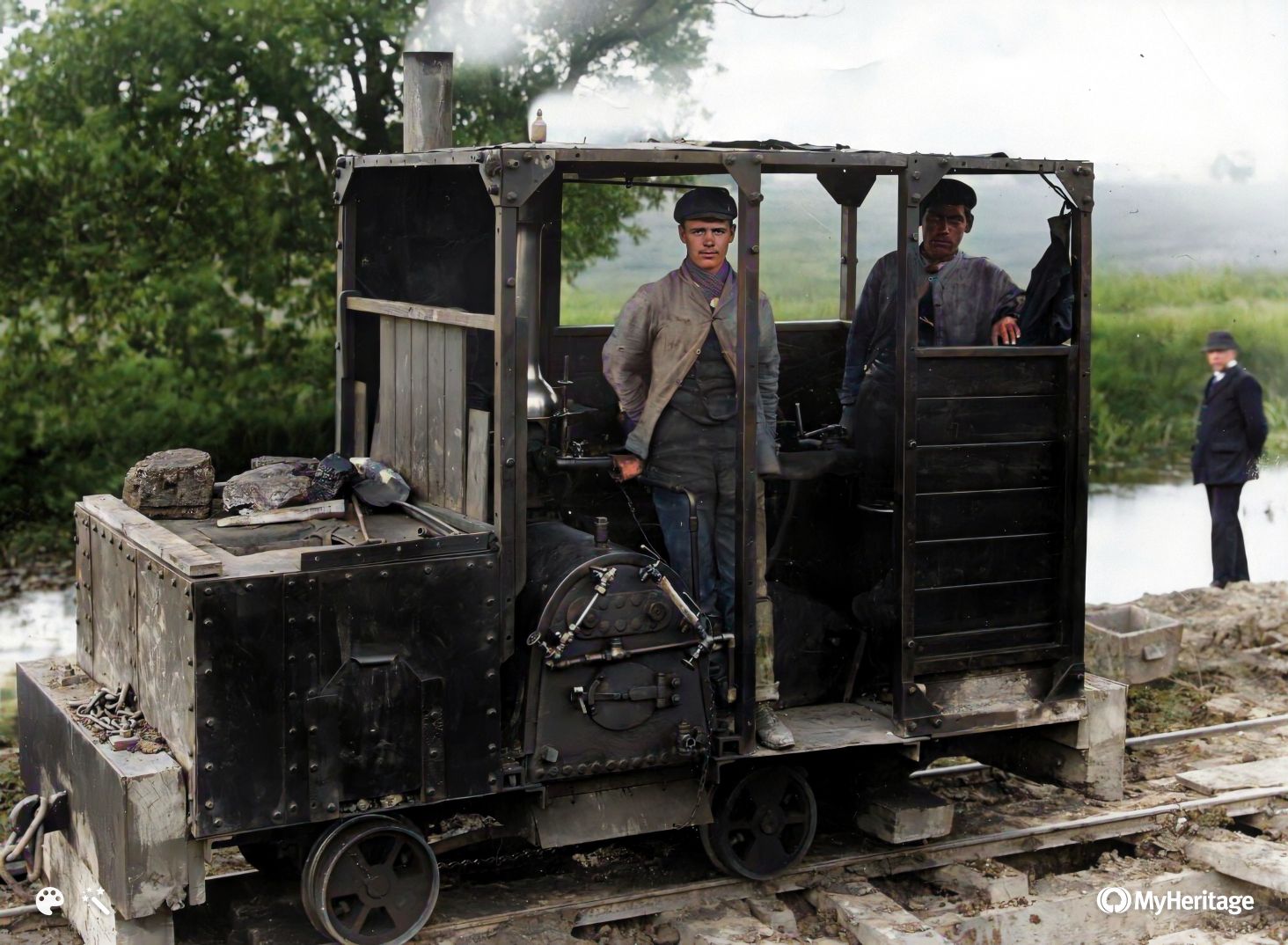 I don't have a clue how the algorithms work, but the faces look entirely plausible and so does the vegetation, so I'm assuming that other colours are reasonably close to reality ( although the front guy's trouser leg changes colour from blue on one side of the post to a greenish grey shade on the other!). If that's correct then the basic colour of the loco would seem to be black.
Philip
www.tinyurl.com/philip-trains
Top

Wow, that's incredible! It really brings it to life - it's sometimes easy (well, for me, anyway...) to forget that the relatively distant past did actually happen in colour!

I was wondering what colour you'd paint it - I'd thought black looked most likely...
Top

That really is impressive. I hadn't realised there was a tool that did colourising automatically. I thought that the loco was standing beside a road, I hadn't noticed it was a water course. Given they're building a reservoir, a water course makes a lot more sense.

The thing I noticed was that the SV dome over the dome appears to be shiny steel and not brass as I might have expected - although I did wonder how they'd keep brass polished in the environment it's working in.
Interestingly, blowing the picture up to 500%, brings out colour subtleties even more and you can see that on the backhead the pipes have a coppery sheen and the fittings look to be brass, all of which you might expect as well, of course.
Philip
www.tinyurl.com/philip-trains
Top

I think that the clothes look entirely plausible as well. Blue Cotton work clothes were the norm and they faded rapidly with washing. So the various shades of blue with dirt layered on top seem correct to me. As does the hint of more colour in the drivers neck cloth. Really amazing colourisation !
Top

philipy wrote: ↑
Thu Jan 13, 2022 10:46 am
...blowing the picture up to 500%, brings out colour subtleties even more and you can see that on the backhead the pipes have a coppery sheen and the fittings look to be brass, all of which you might expect as well, of course.

That's incredible. How on earth does the algorithm differentiate between copper and brass? I thought it was clever being able to recognise flesh and clothes, but reacting to steam fittings takes it to another level

ge_rik wrote: ↑
Thu Jan 13, 2022 12:31 pm
That's incredible. How on earth does the algorithm differentiate between copper and brass? I thought it was clever being able to recognise flesh and clothes, but reacting to steam fittings takes it to another level

My guess is this is all simply machine learning. The system has a bunch of photographs of copper and/or brass that have been correctly identifies, and tries to extrapolate. Getting the overalls the correct colour is probably easy - lots of similar photographs to provide the data. What the algorithm almost certainly won't have been able to do is identify that this is a locomotive, because I can't imagine it has (m)any other locomotives in its database that look remotely similar. But it will have lots of pictures of copper pipes, and brass fittings, that look similar enough to copy the colours for.
http://moelrhos.uk
Top

Not sure it will have ANY loco's in it's database, given that its purpose is to colourise vintage photo's of people.

Anyway, this is the colourised photo blown up to 500%. 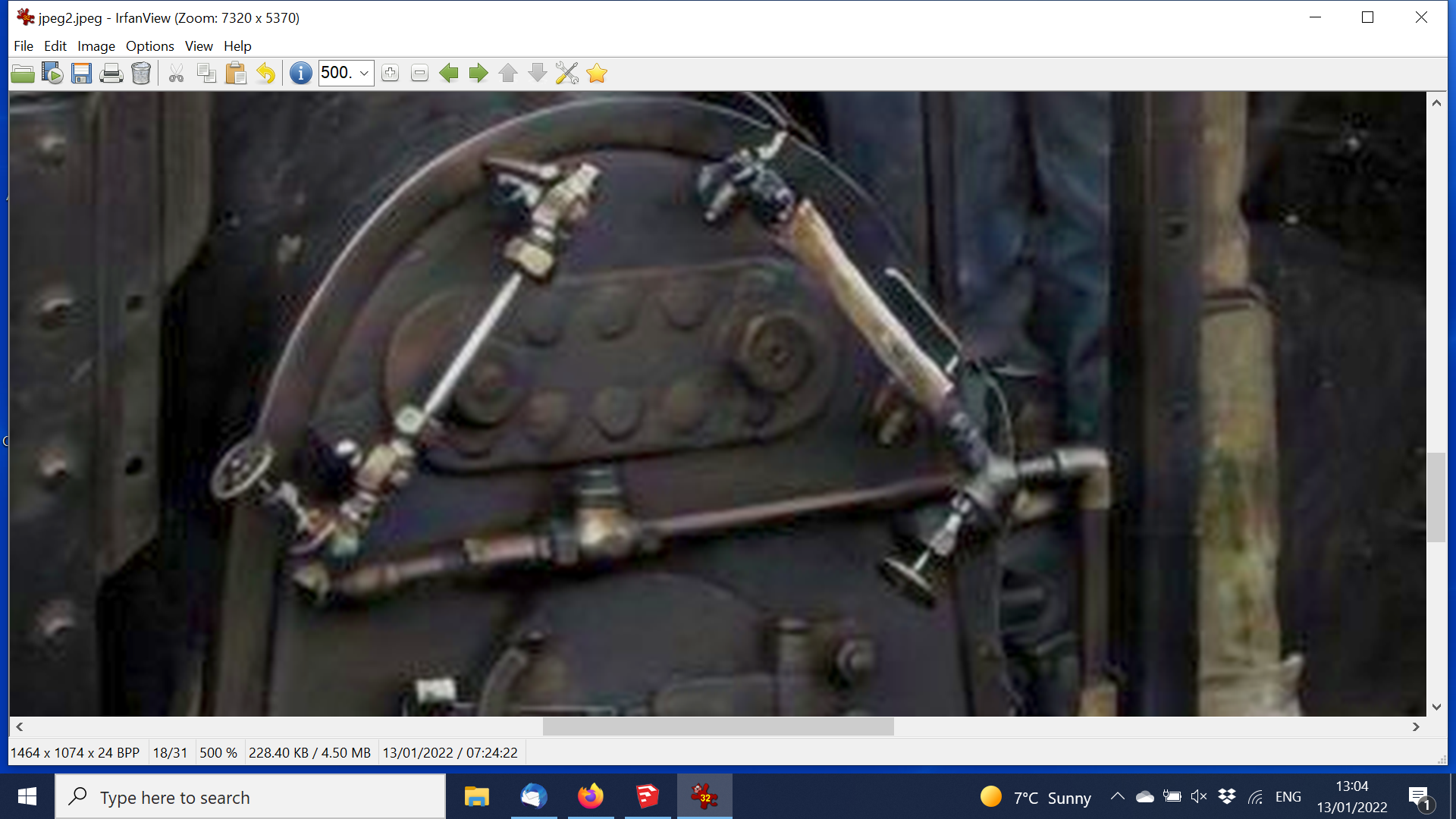