A place where discussions are about 3D printing.
Post Reply
15 posts • Page 1 of 1 Just kidding, the pot is made up of two halves.
This is an old Märklin acid pot wagon.
I only have one pot. The wagon holds four.
Could anyone draw up a 3D model so I could have some more printed? 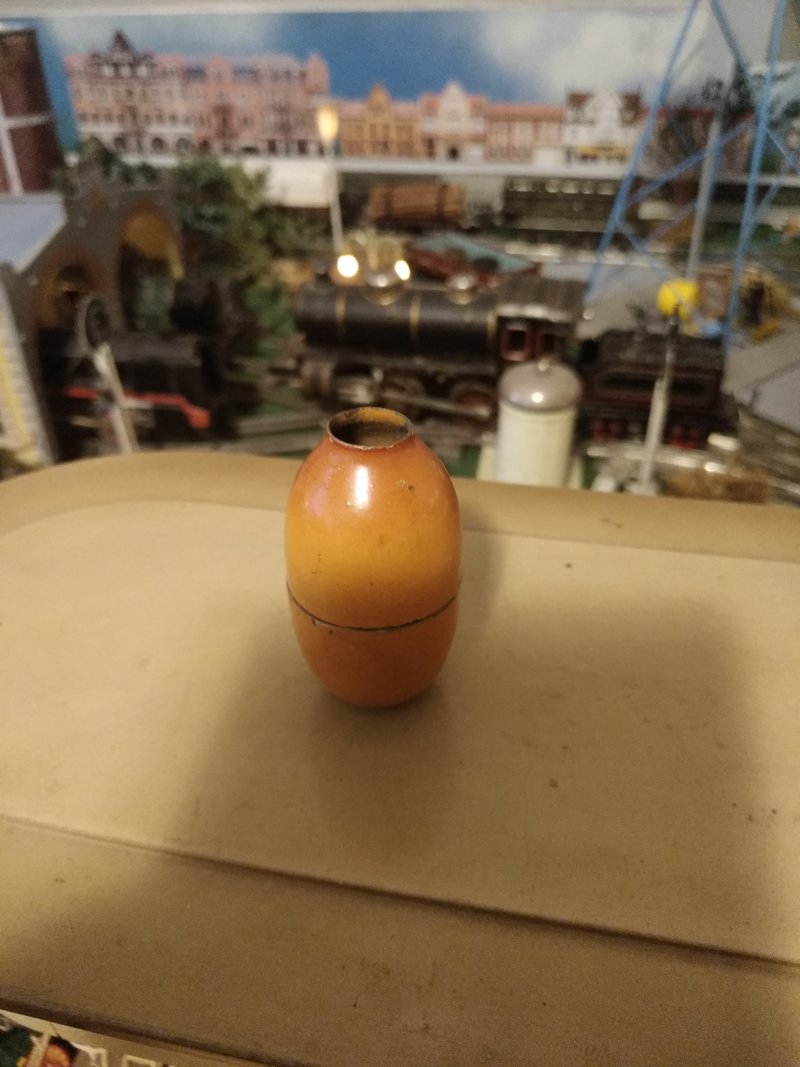 Exact dimensions will be provided.
Top

It was difficult to measure as the sides are curved.
These are the main dimensions (in mm): 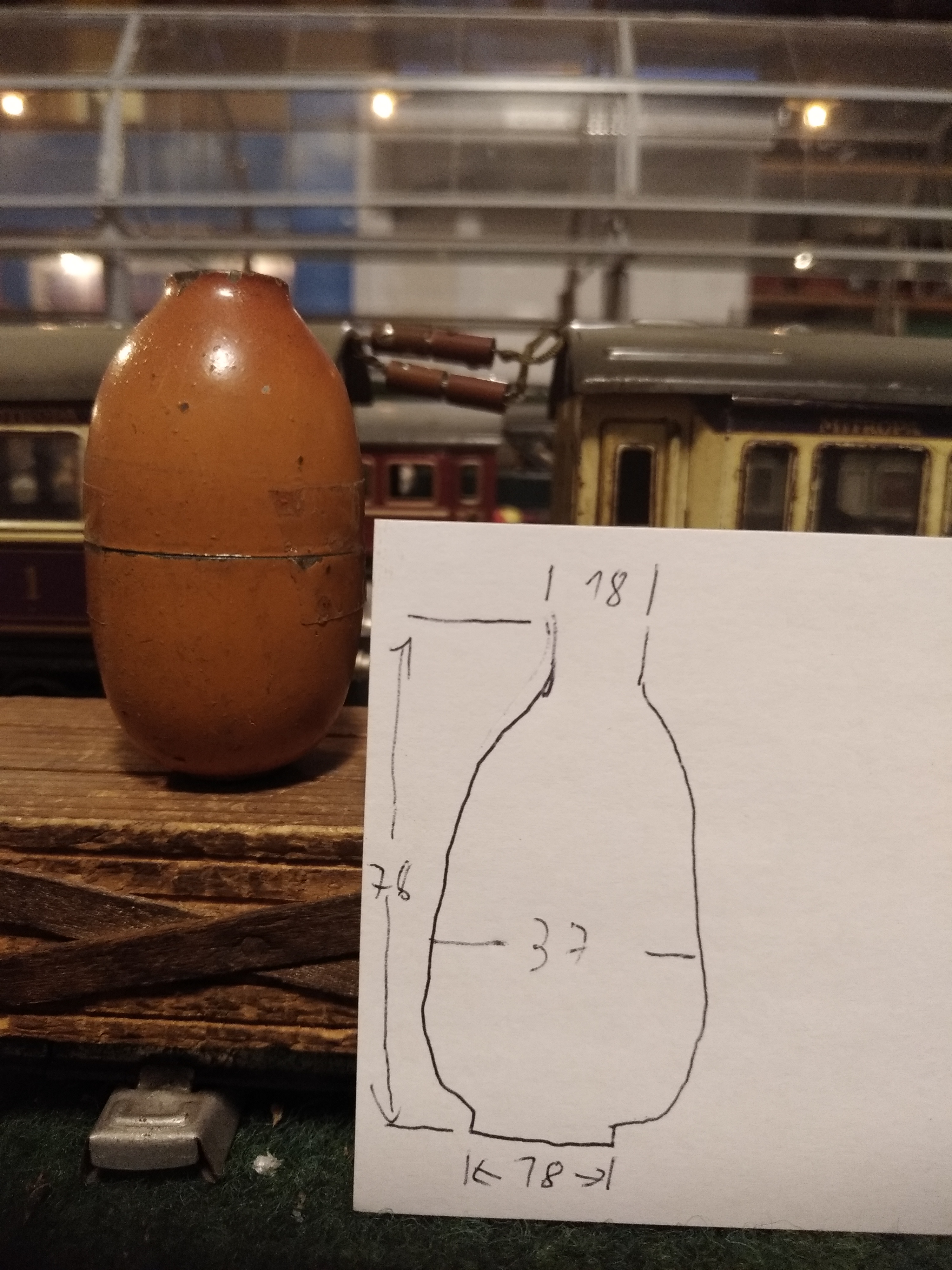 and another picture to show the profile: 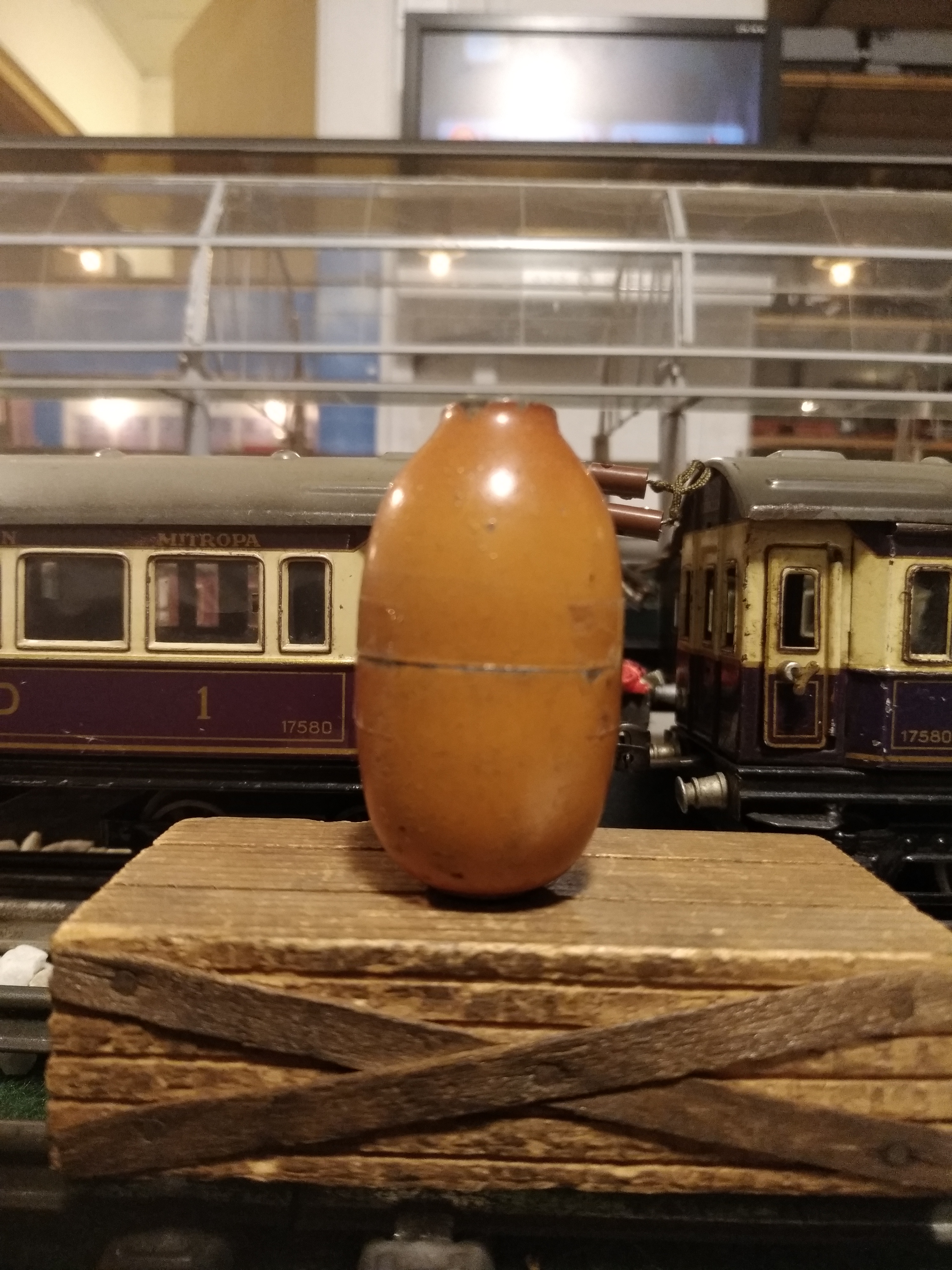 I do not need a 100% match. It should just look right from normal viewing distance.

I could do the two domed parts in TinkerCAD but would struggle to do the flared openings at top and bottom.
I think this will have to be done in a more sophisticated 3D CAD package 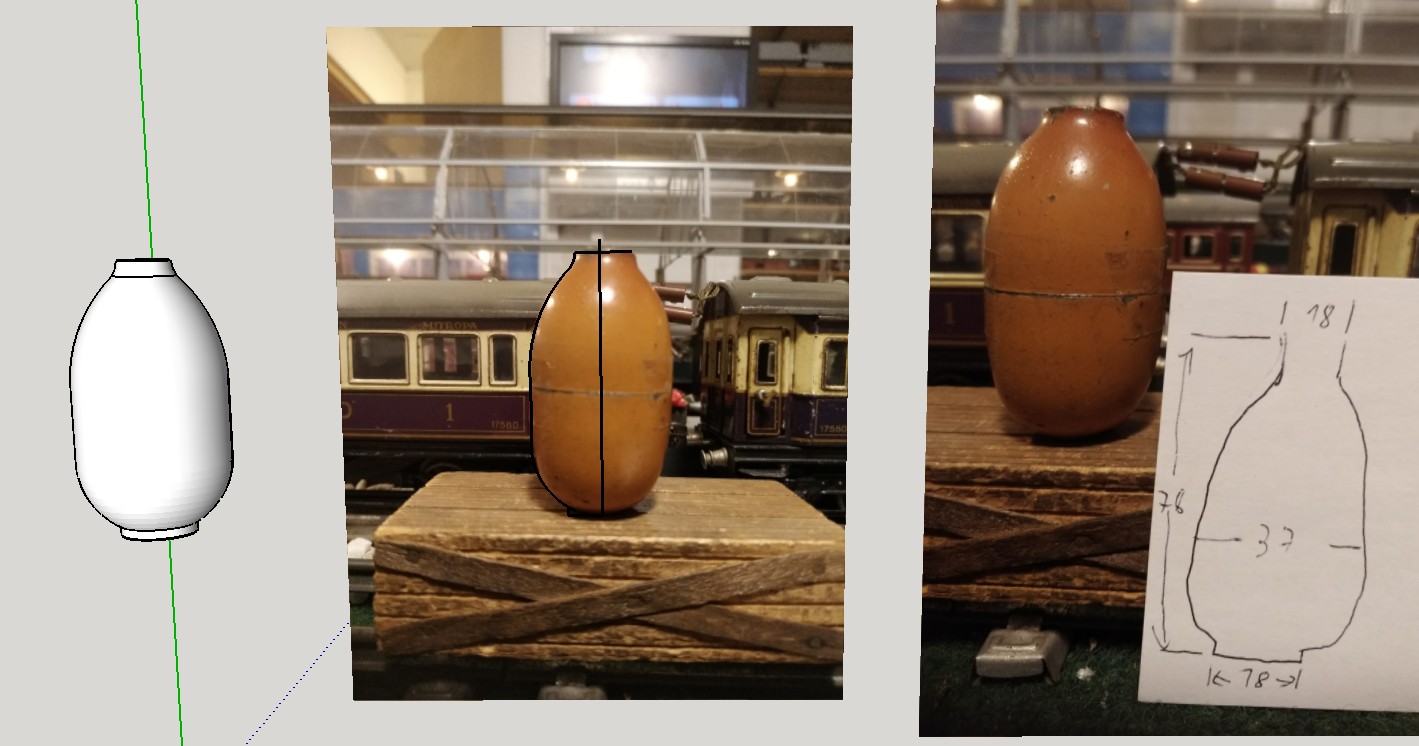 How did you get the curved body done?
What wall thickness your you recommend for printing if made hollow?
The original pot is really thin metal.
Du you think 0.5 mm will do?
Top

To get the curve, I imported your photo into Sketchup and then used the "arc tool" to trace over it. It took a couple of goes to get it acceptable ( to my eyes).
Then I simply joined up the curves with straight lines for the sides and base, so that I ended up with a flat outline of half of the vessel. You can see the black lines on the LH photo on my post above. Next I drew a 9mm radius circle at right angles at the base, selected the edge of the circle, selected the "follow me" tool and clicked on the shape and it instantly rotated it to give the completed vessel.

If you want a more graphical explanation I'll try to do a series of stills.

One thing I should say is that at present it is completely solid, because I didn't want to mess about with hollowing it until I was sure you liked the shape, but that shouldn't be too much of a problem to do before producing the stl's

For printing it, personally I'd try a resin printer ideally, but if you want to use fdm, I very much doubt you would get away with less than 1mm thick walls and you might have to go to 1.5. Having said that, do you really need them completely hollow? Because if they were solid up to a couple of mm below the neck you might have more chance of "balancing" a thin neck on top, if you see what I mean, and painted matt black inside it would hardly be noticeable. I could taper the edge of the neck down to say 0.5 mm but no guarantees that it would print properly, that will depend on your slicer and printer settings, I think.

I know you wanted three of these to match the metal original, but in terms of consistency, you might want to print four and put your original away somewhere for the future, because they won't look absolutely identical.

BTW, do you want an indication of the central horizontal seam, or is that just where the originals are joined in two halves?

the seam is optional.
I am planning to have some more printed. some will be "stored" on a pallet as replacements.
A friend has a resin printer, so this could be done without problems.
Just leave the top 2 mm open.

I have never used Sketchup. Might be worth looking at.
Top

OK, I don't think I can attach an stl here, so I'll put it on the 3D print files section.

I'm not sure about the straightness of the sides, it looks as though perhaps it ought to be a bit more bulbous in the centre? If you want me to adjust it, just say.

I've used Sketchup for years and am used to it's quirks, but Rik couldn't get on with it at all, although Trevor uses it. Also, I use the PC standalone 2017 version, which is obsolete. They stopped supporting it several years ago and you have to sign up for the (free) cloud version. Thats fine as long as there is a good net connection, but any probs with your phones and ....!
Philip
www.tinyurl.com/philip-trains
Top

I haven't got involved in this because I always have problems with the follow me tool. It was obvious that it would be the way to draw it in sketchup and I knew I couldn't do it.

Having said that I got it to work on one occasion - but couldn't repeat it!

As Philip said I use sketchup the same 2017 version on an iMac - but it took me a long time to really understand it.

Glad to see that Philip has solved it for you.

I really struggled with SketchUp. I could get things to look ok on screen but when I tried importing them into Cura, I'd get all sorts of error messages (mostly that the shapes weren't manifold). I spent ages trying to discover ways of fixing them and Philip tried giving me a 1:1 tutorial, but I'm afraid to say I struggled with the concepts involved.

TinkerCAD came to my rescue. As a former primary school teacher, it probably helps that TinkerCAD is designed for kids to use. Touch wood, with TinkerCAD, I've not (yet) had one shape which Cura has rejected despite having drawn and printed around 700 different shapes.

However, it's not as versatile as SketchUp, especially with complex curved shapes like this.

A friend will try the file on his resin printer.
Let´s see what will happen.
Top

First prints were successful.
Pots look good and have the right shape.

Something must have gone wrong during the data conversion as it is too big by a factor of 1.4.
Strange.
Will look into it and show pics after the right size has been printed.
Top

Glad the first print sounds OK.
No idea about the sizing problem, but assuming your mate is using Chitubox to slice, it is easy to scale it by the correct factor first. Other slicers almost certainly have a similar function so it shouldn't be a big deal.
Philip
www.tinyurl.com/philip-trains
Top
Post Reply
15 posts • Page 1 of 1