A very popular starting point for Live Steam. With their low cost comes a number of problems which can be discussed here
Post Reply
11 posts • Page 1 of 1

My first post here although I've been reading the forum for a long time. I'm looking for some assistance with my MSS Loco which I built from a new kit Autumn last year. The loco is entirely standard and 45mm gauge. I'm on my fourth box of MSS fuel tablets for it and performance has been variable to say the least.

Firstly - are my expectations too high?

I have an outdoor oval of level track with 4 ft radius curves. The loco will now, with some persuasion, run almost continually provided there is no load. To do so I preheat the water, fill the tank and then use one tablet to build pressure and make steam. I lubricate the cylinder and reverser faces with Accucraft steam oil and then run the loco on blocks to ensure it's all warmed up and not leaking water. The loco runs beautifully on blocks, very slow running is possible and very little in the way of leaks, just a very slight dribble from the piston ports on the cylinder. Once that fuel tablet is done after 7-8 minutes and provided it's got about 60-70% of the water left I put a new tablet in immediately and put it on the rails. It will then usually run by itself for 5-6 minutes at a reasonable speed. It will go faster but then runs out of steam.

The problem I have is it has no pulling power whatsoever. One MSS coach is enough to prevent continuous running. It will do 3 or 4 laps if I let it stand building pressure but that's that. It seems the boiler isn't replenishing the steam quickly enough, or the steam is escaping elsewhere.

Drilled the frame steam ports to around 3mm as the reverser ports were slightly occluded.
Manually worked the cylinders with 3 in 1 type mineral oil for over 1 hour each to ensure smooth operation.
Lapped the cylinder and reverser faces with fine wet and dry on a perfectly flat surface
Polished the faces of the aluminium 45mm spacer blocks (they were very uneven and this was the change that allowed the loco to run continuously light engine)
Removed the whistle actuator arm (it fouled on the cab roof)

As far as I can tell I have no leaks around the sight glass, very occasionally I see some bubbles around the bottom of the safety valve but reversing the fibre washer seems to correct that. The reverser has a very very narrow band where neither forward or reverse is selected.

Would one expect a standard loco to be able to operate continuously on the fuel tablets with one or two vehicles in tow?

As the loco will not reach the safety valve release pressure unless standing still I don't think an updated safety valve will make much difference, perhaps only providing a better seal to the boiler. I've been considering a gas burner but I can't really commit to that while there's this doubt in my mind that something else is wrong with the loco.

Basically, until I'm sure the the standard loco is behaving properly I'm not keen to upgrade parts.

The only other thing to note is the distance between outer flange faces on the wheels seems slightly wider than my 1980s LGB Stainz, so that would potentially cause binding on the corners, but it doesn't seem too tight and will run freely if I test it manually with the with the cylinders removed.

Thanks for any advice you can provide.
Graeme
Top

Welcome to the forum
The MSS loco, like the original mamod can be quite variable. The solid fuel burner is not up to much and a meths burner or gas burner will help immensely with steam production. This coupled with an up rated safety valve will probably make a big difference.

They can be built up to be nice little engines and there are many on here who know their mss/mamod engines inside out.
If at first you don't succeed, use a bigger hammer!
Top

As Jim said, a meths burner gives a massive boost in heat and therefore steam generation. It is possible to fit 1.5 tablets into the normal burner by bending the tabs in the centre flat, this should give you a bit of a boost. Give that a try, if not I have a lot more ideas
Dan,

I'll try that extra half tablet. I think ultimately I'd prefer gas over meths, I've got no experience of meths firing. My concern is if the loco is working inefficiently now on the tablet it will still not be performing as well as possible even on gas - it may be a lot better than currently but there will always be that doubt about the overall performance.

It's very difficult to tell from YouTube videos exactly what the standard loco is capable of on the rails as they all either show it running on blocks or short clips of fast running. Has anybody seen a standard solid fuel loco operate for more than a 30 seconds or so on rails with a couple of vehicles behind?
Top 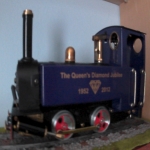 GraemeH wrote: ↑
Mon Apr 10, 2017 5:09 pm
Has anybody seen a standard solid fuel loco operate for more than a 30 seconds or so on rails with a couple of vehicles behind?

My MSS diamond jubilee has no upgrades, i got it to run for 1 min and 17 seconds pulling 1 mamod passenger carriage and 2 flat wagons before it ran out of steam and needed to catch its breath.
Granted this was an entire 2 and half laps around a oval.

the standard safety valve is set very low and what normally happens to mine is it happily runs around until the safety blows all the pressure out at once and you have to wait for it regain operating pressure before it'll move again. i dont know why it does this either.

My standard MSS used to run for about 8 mins with 4 wagons on tablets but they weren't the MSS ones. IT ran like that for about 4 months untill the camping shop closed and i changed to a meths burner.
Dan,

Just joined the forum, so maybe you've solved your problems by now. I had exactly the same experiences as you. I asked MSS if I was expecting too much to have the loco pull a tender and carriage and received a non committal answer, so I almost gave up on it as a bad job.
After a while I decided to buy a meths burner and high pressure safety valve along with the water filler valve from Dream Steam and at last I could get it to run well, except- if I set the steam valve open enough to run, the train went too fast around curves. If I set it slow enough to cope it wouldn't run up even a 1/4 inch rise. During this time it came off the track, turned over and burst into flames. I couldn't stop the meths burning and could see the water level was low but couldn't get any in as the water valve was too hot and melted the plastic pipe. The result was a melted sight glass and solder dripping from the rear of the boiler.
I've re-soldered the boiler and fitted a new sight glass successfully.

I've also solved the speed problem by fitting a mini radio control servo to the steam valve. The servo is in the cab connected by linkages. The battery and receiver are in the tender for now but I'll put them in the carriage. It works perfectly. I can slow down for the curves and speed up to cope with any slight rises. It doesn't look very pretty but at last we can enjoy our investment.

I have to say if you want an easy life these engines aren't for you but they're certainly interesting!
Top

Just a quick update to this for anybody who's interesting in the MSS loco performance issues:-

Summer was busy at work so garden railway projects were on hold for a while, but a couple of days ago I ordered the higher pressure safety valve and water top up valve for my loco. The result is great performance with the solid fuel (1.5 tablets in the tray now - thanks DLRDan) I can get very good performance from the loco.

Even on this slightly chilly evening my loco has run continuously round my large oval with two MSS vehicles, a heavy metal wheeled SwiftSixteen well wagon and two lighter resin wagons.

I filled the boiler to about 60%, just above the screws on the backplate, and added the fuel tablets. After 2 minutes (or 1 minute if the loco is still hot) the safety valve is blowing off. I've been liberally coating the exposed pistons in steam oil and this seems to makes great difference. The rails are very slippy this evening so lots of wheel slip, but even so it will run for 4-5 minutes before the water level is getting close to the "min" level.

A quick pause to top the boiler back up and then another couple of minutes of running. When there's not enough steam production I use the remaining heat to ensure the boiler is at the required level and hot for the next run. A quick change of the fuel tablets and it's ready to go within a minute of the fuel being inserted.

I guess my original safety valve was causing the poor performance, but the top-up valve has made near-continuous operation possible. It also means I don't have to preheat the water as I can start the boiler at a lower level so initial heating takes a lot less time.

I started the post as I really wanted to try and get the best out of an "original" spec loco, but with these two new components the loco has been transformed. I think a lubricator would be a useful upgrade next...
Top

Great thread. I am very interested in the problems of MSS locomotives. Thank you for keeping us informed of all your progress.
Do you have a few pics of your upgraded loco ? They'll be very helpful.
Did you use MSS Upgrades - Starter Upgrade Parts Kit from Dream Steam ?
Having a railway whatever it's size is better than no railway at all !
Top

I have found that a high pressure valve and a gas burner give a good performance.
Bryan

Be very careful with a gas burner, you can very quickly ruin the boiler if it goes dry. With a meths burner, not so much. This is one reason you see many more meths burners in Mamod/MSS engines over a gas burner unless you have one of the aftermarket silver soldered high pressure boilers. When I had my Mamod, I used a 3 wick meths burner, proper thottle valve in the cab that replaced the whistle and a dead leg lubricator. The meths burner and lubricator helps the most and should be your first upgrades. Cylinders need lubrication for the whole duration of the run, not just a squirt of steam oil at the beginning. Make sure to use proper steam oil in the lubricator. Your dealer can assist with this. That said, I upgraded a year or so ago to a Merlin Mayflower. Mike the Aspie
Silly NT's.....I have Asperger's Syndrome!
Top
Post Reply
11 posts • Page 1 of 1