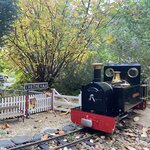 Hello all,
Ever since the very early days of the railway, a resin Model Town signal box has guarded the station (now named Delabole) and the many junctions off to the stone quarry nearby. The kit was built up as one would normally do and here was the result:
I thought it looked rather tidy and was pleased with my effort 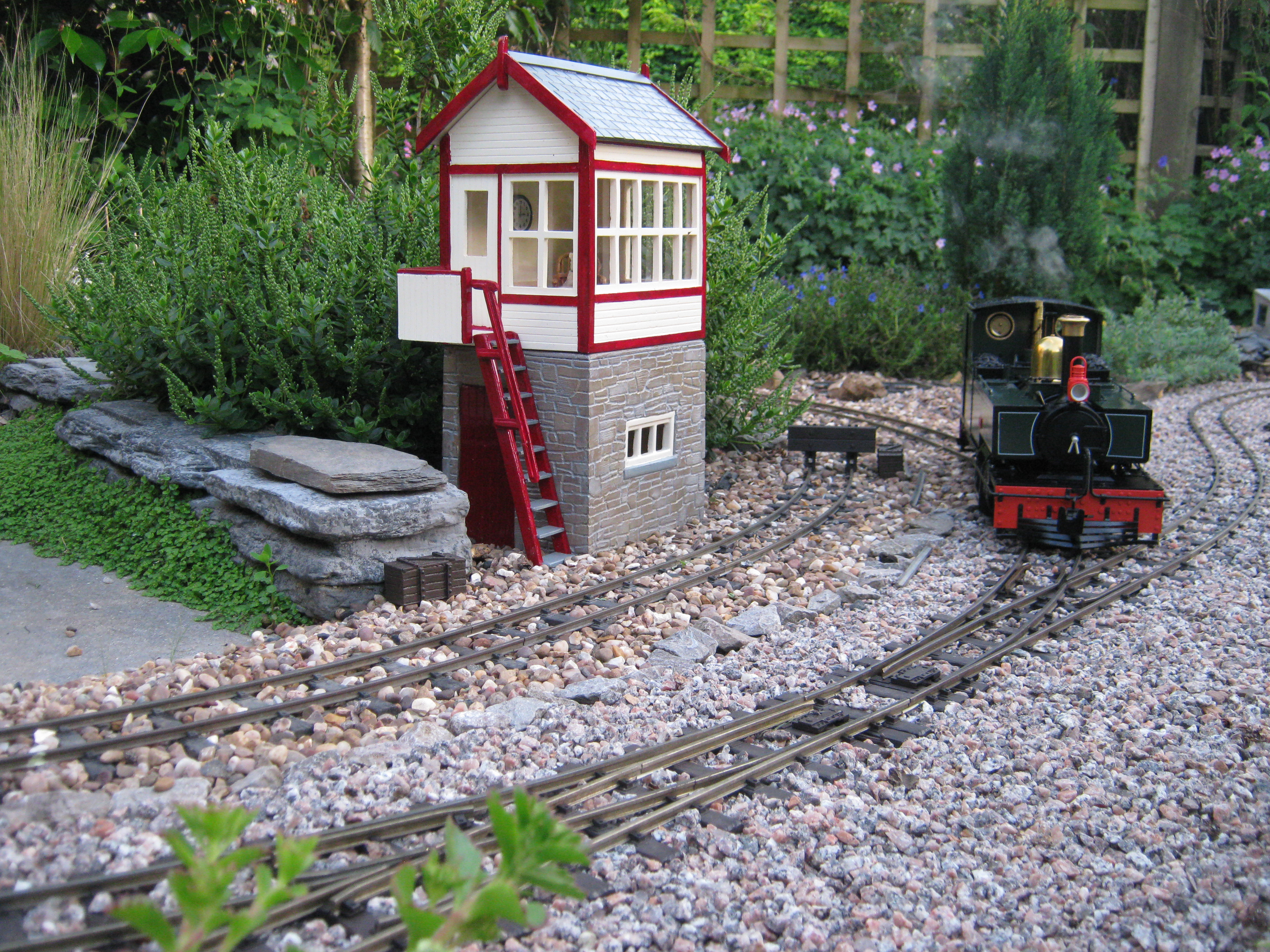 At one point it even got its own concrete foundation and retaining wall to hold back the flower bed debris. 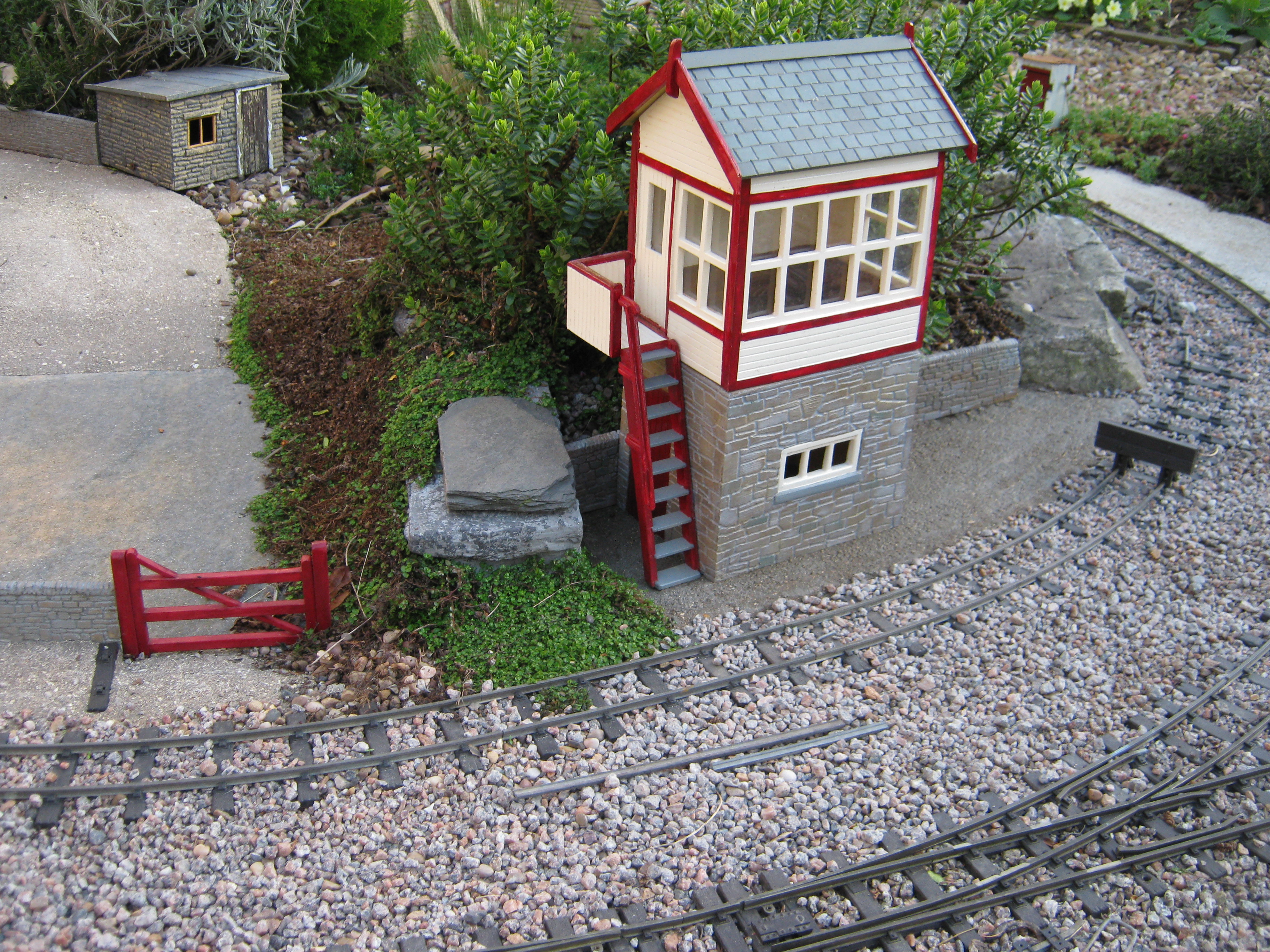 However the red Humbrol soon started to fade and peel in the sun and nearly 4 years later it looked like this:

Still alright but a bit tatty. 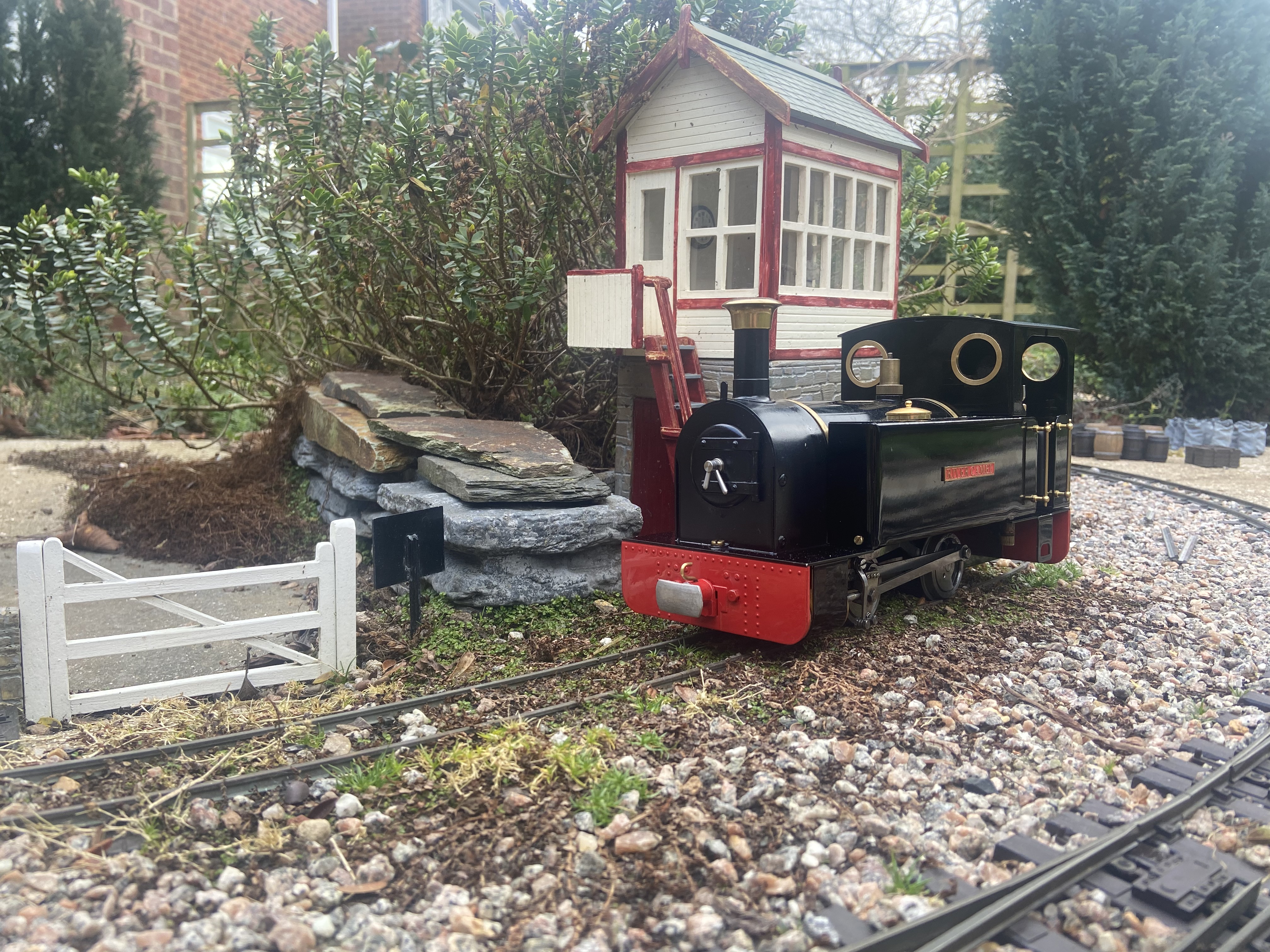 ) chopped the roof line down so the top of the window met the roof.

I had drawn inspiration from boxes at pilot yard on the L&B, Douglas on the Isle of Man and of course Delabole box on the North Cornwall railway. I found these all very picturesque buildings so I have tried implementing features from these into the model.

the roof is just placed on at this point 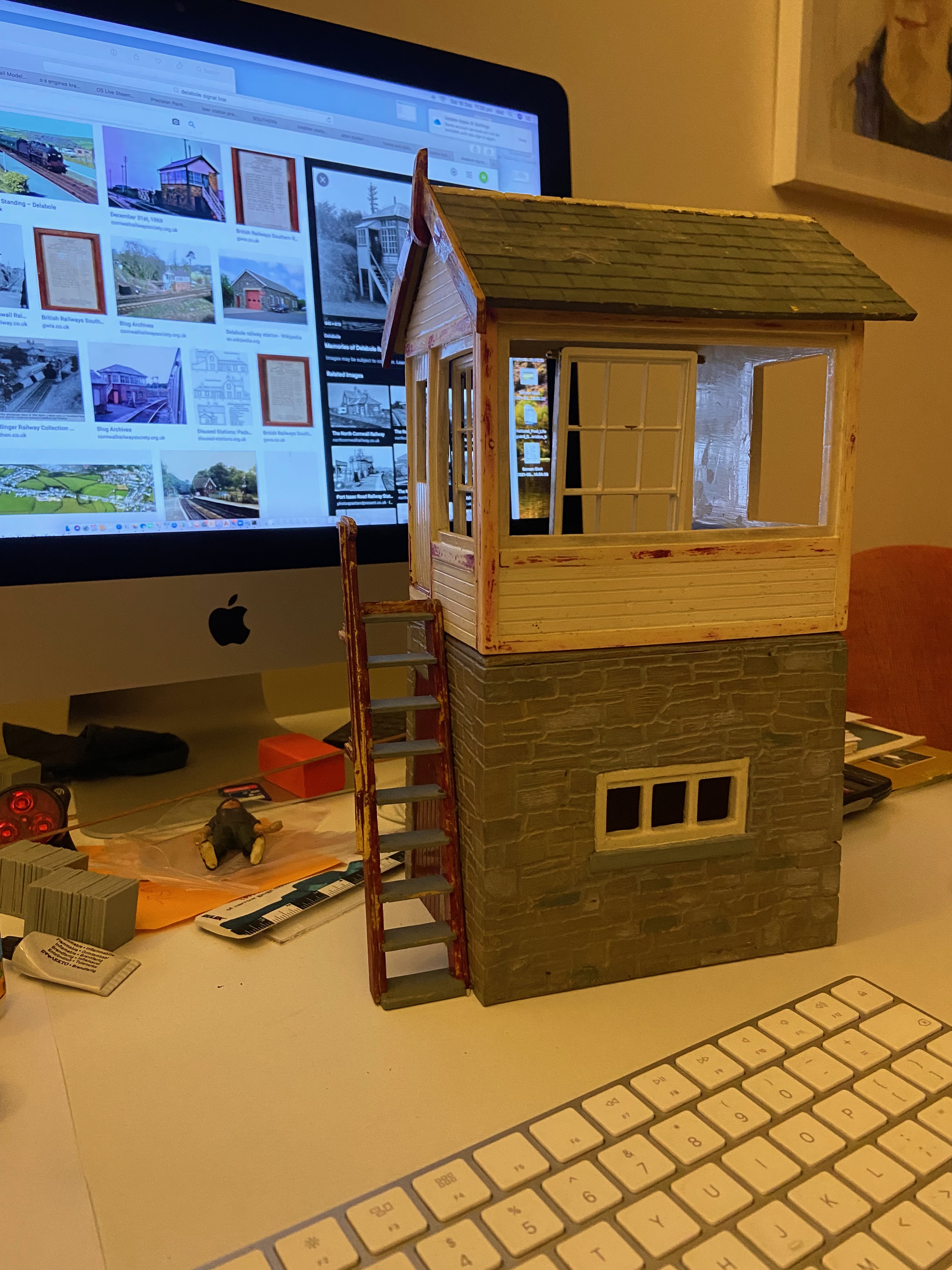 I always like the patina that real wood gets compared to resin so I decided my first move would be to overlay the existing panelling with hardwood veneer strip. This adds nice texture as well as depth to the model.

I also added a vertical halfway along the front window using some of the old window frame. 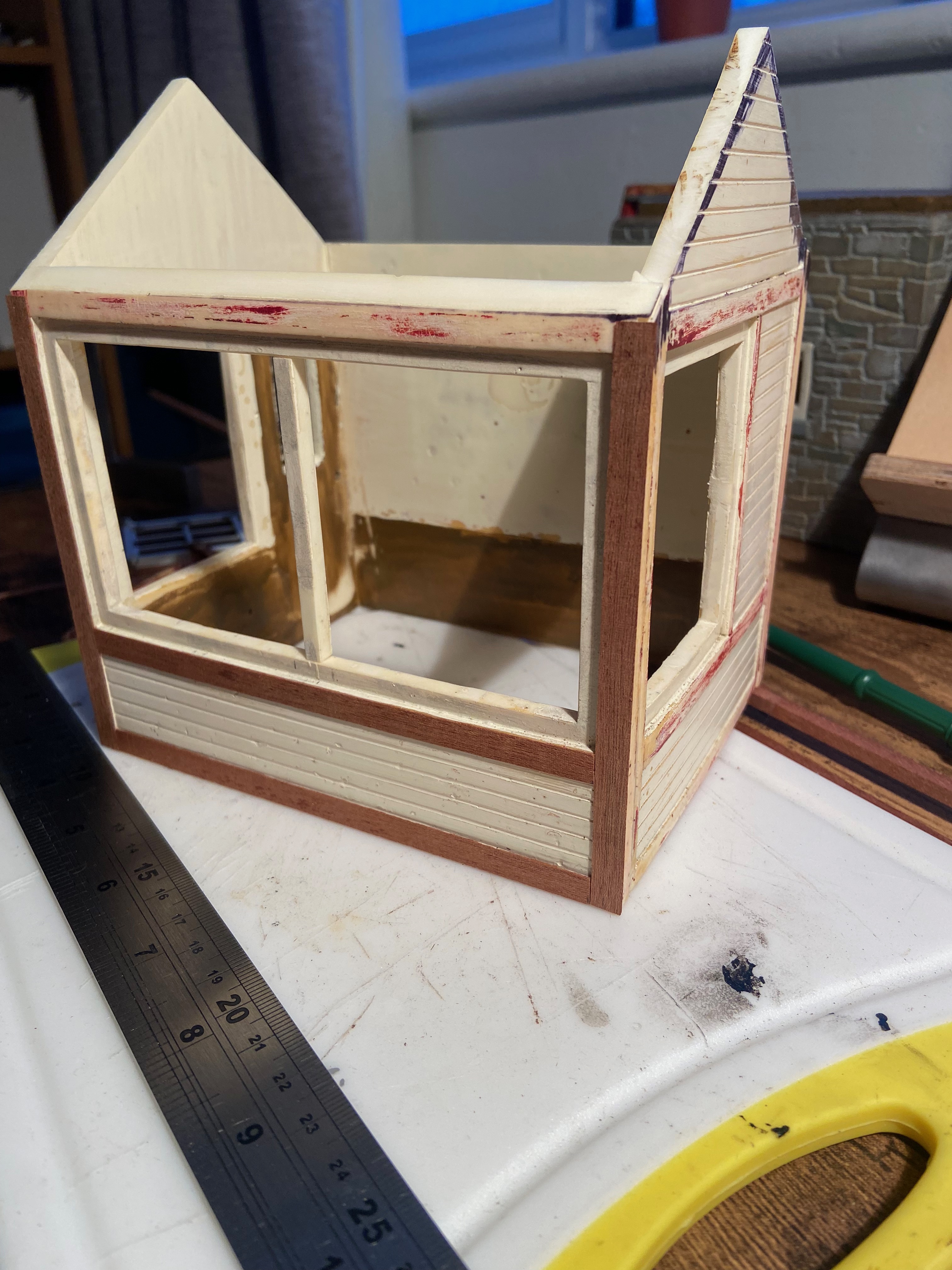 I then decided to make a move on replacing the windows I had ripped out. I thought I would trial some frames made out of 1.5mm square hardwood strip to see what would be possible. Whilst the frame worked well around the edge, I found that trying to create any sash bars was nearly impossible with just butt joints. I trialled some miniature lap joins instead.

a needle file was used to create the notches - here are the results: 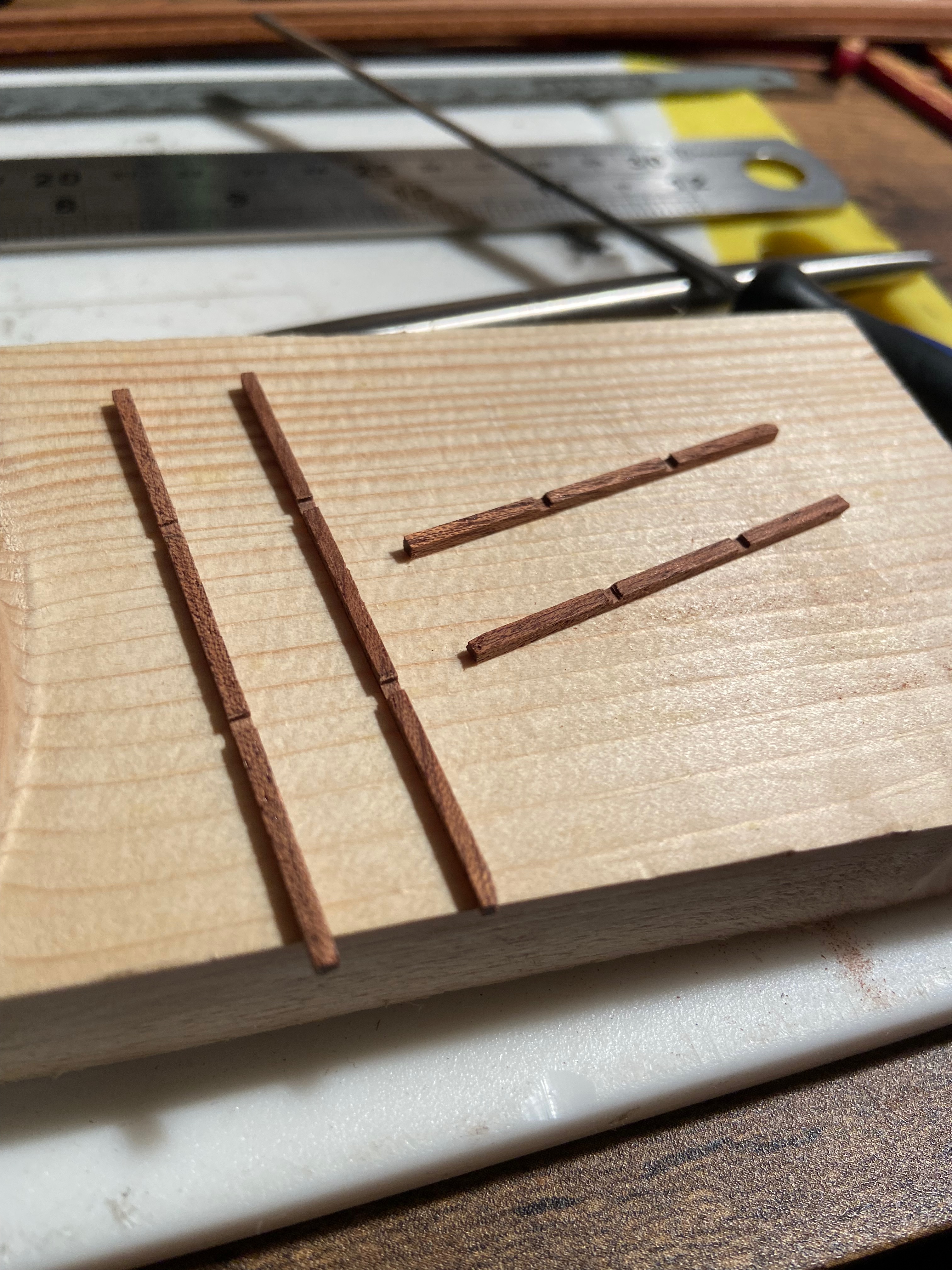 Looking good so far. Those frames look the bees-knees

To continue the build, here is the first window I trialled. It uses the joining method shown in the last post to hold it all together. I have also added a simple frame to the window in the door as well. 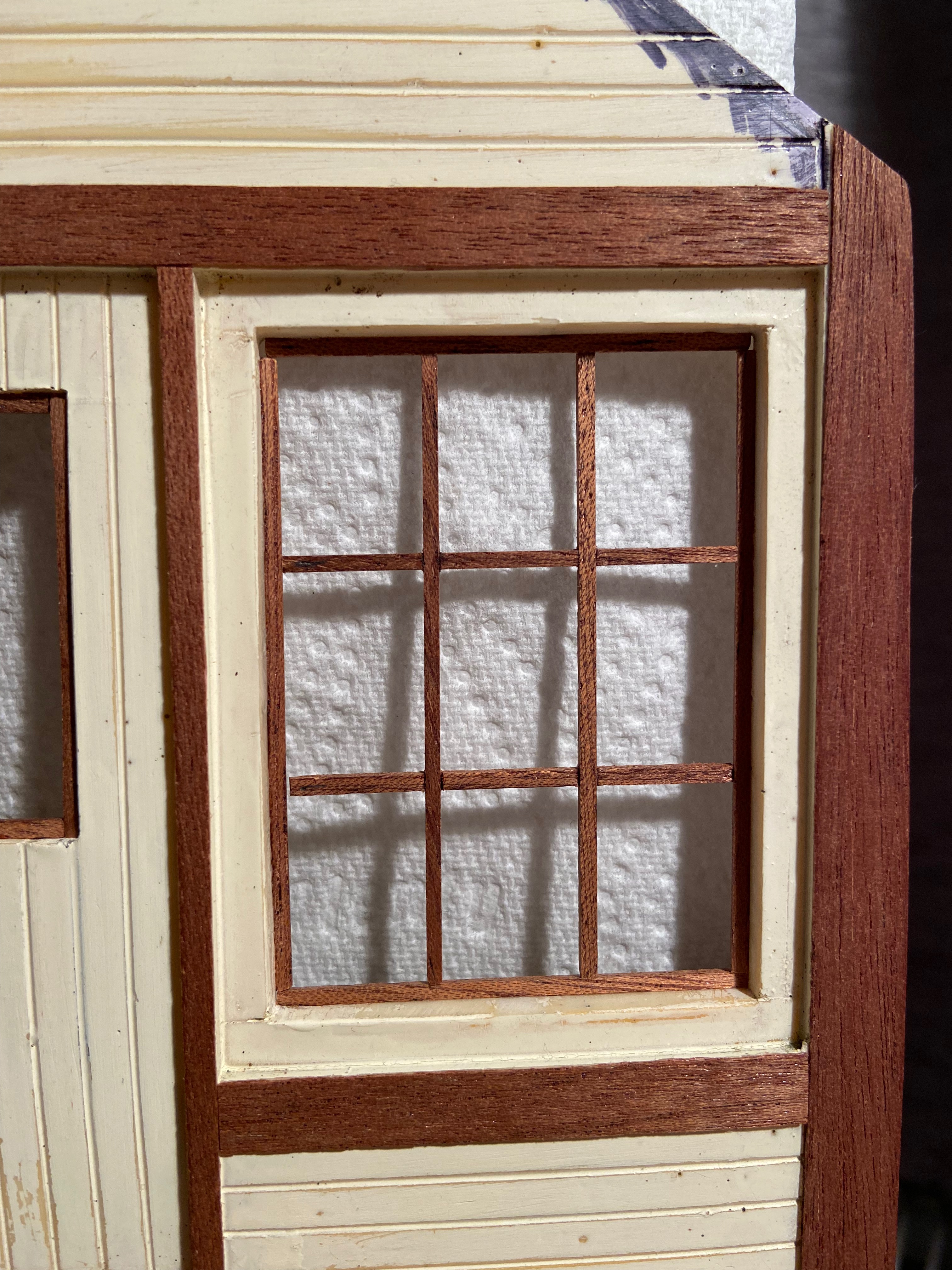 As I was happy with how the side windows looked so I turned my attention to the front.

Looking at prototype photos for inspiration I had noticed that almost all signal boxes had sliding sash windows. Also, I always like it when doors, windows etc are modelled with the ability to be opened and closed. I thought it would be nice when, for example, I'm running trains on a hot day, to be able to open the windows on the signal box - adding a nice bit of authenticity to the scene I feel. So with these criteria in mind I set about head scratching.

some sashes were made up: 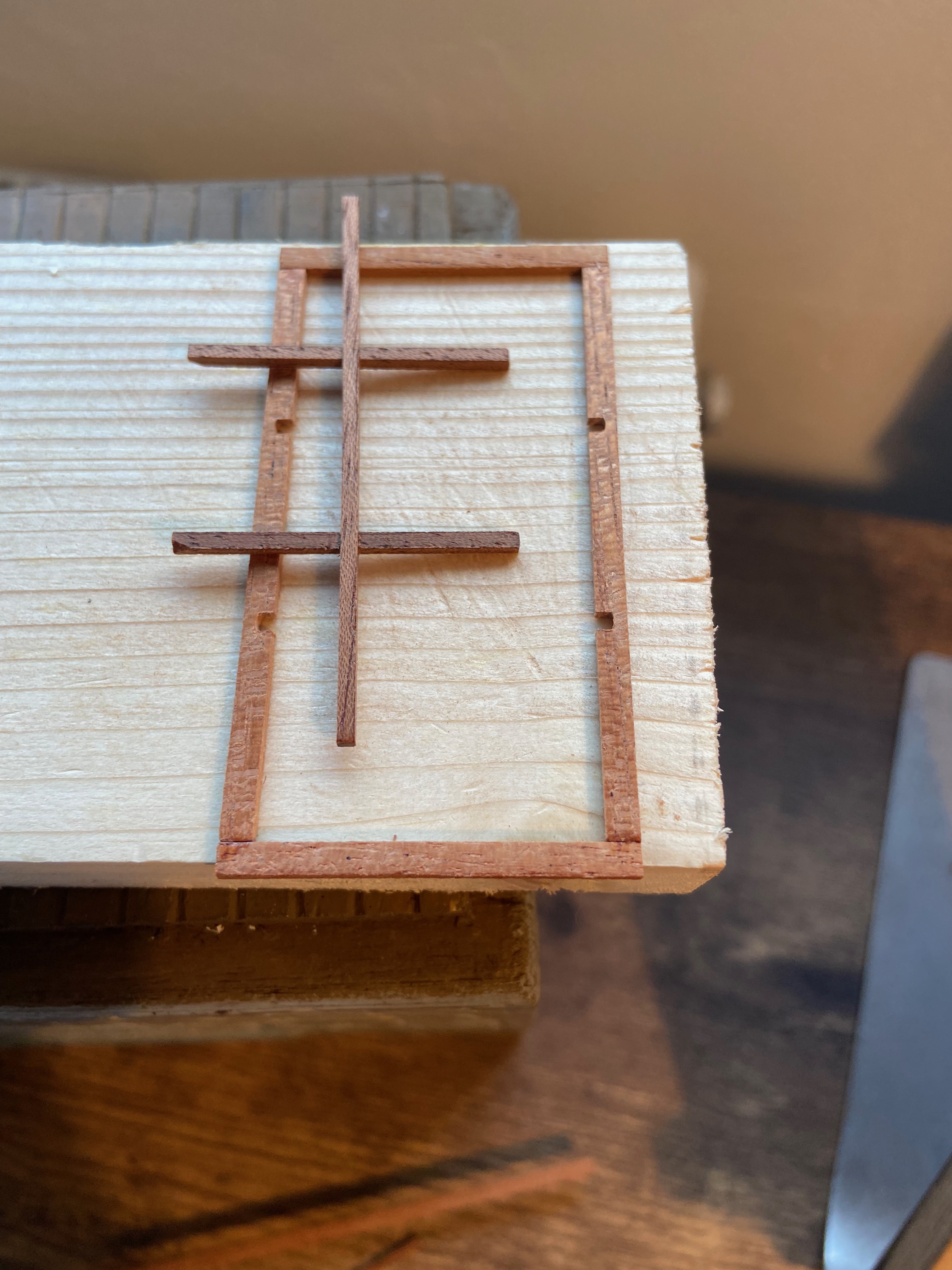 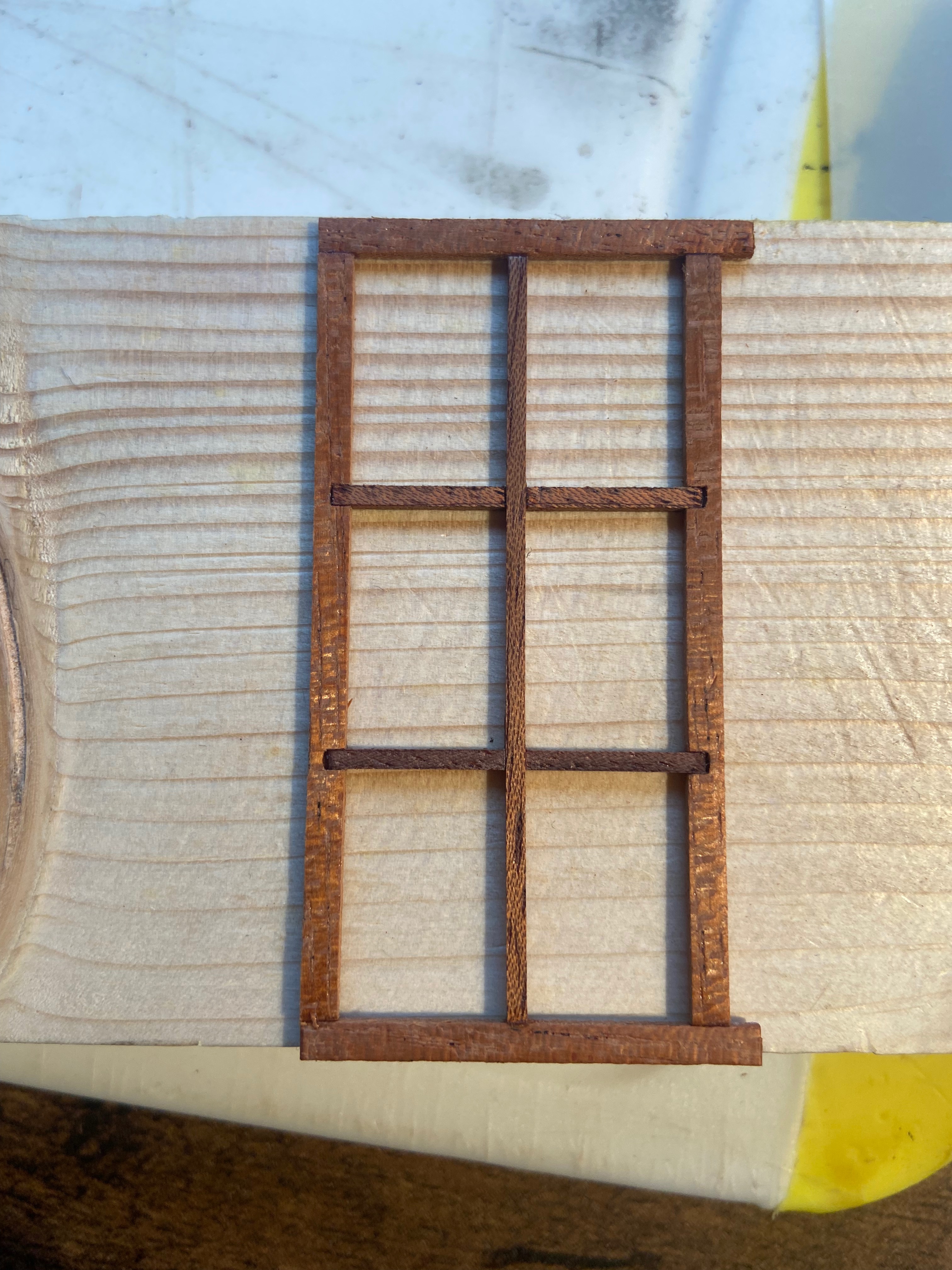 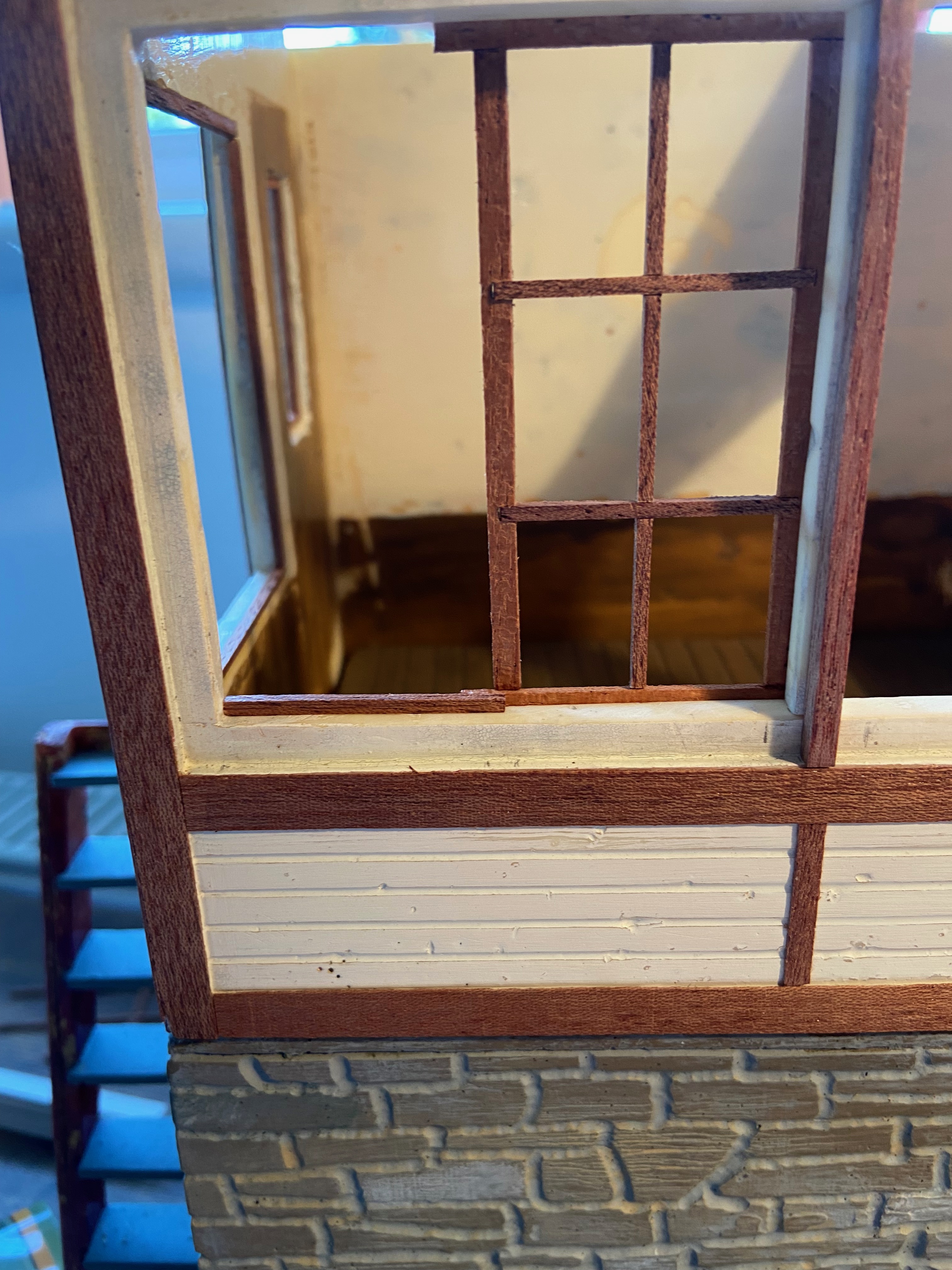 The dimensions of the sash were designed to fit behind the existing frame (on the inside of the wall). This would mean that they only need a thin runner along the top and bottom of the window to hold in place.

this photo should help it all make sense: 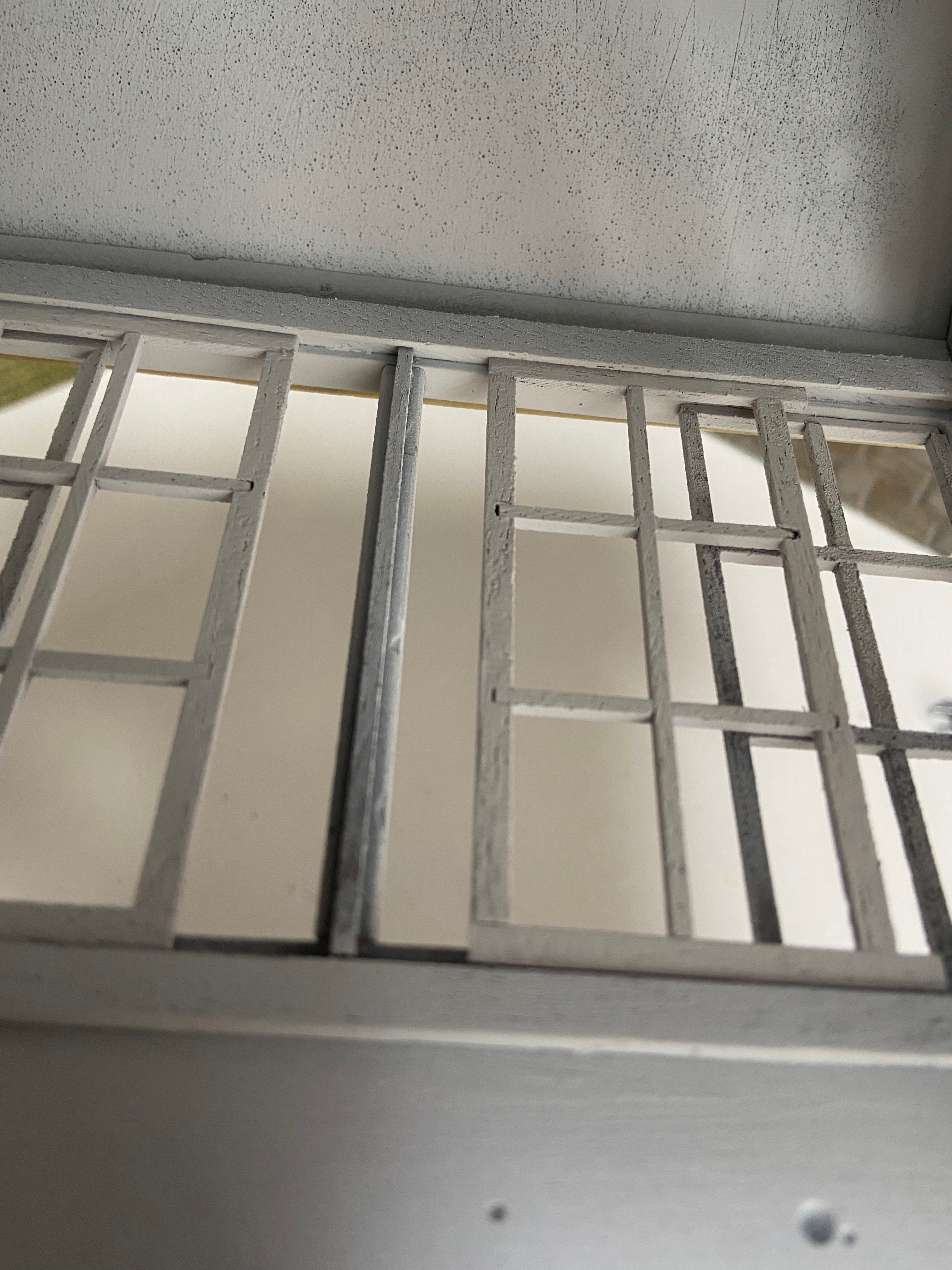 After many happy hours of cutting and sticking what were basically match sticks, I had got this far:

First coat of primer has also been applied 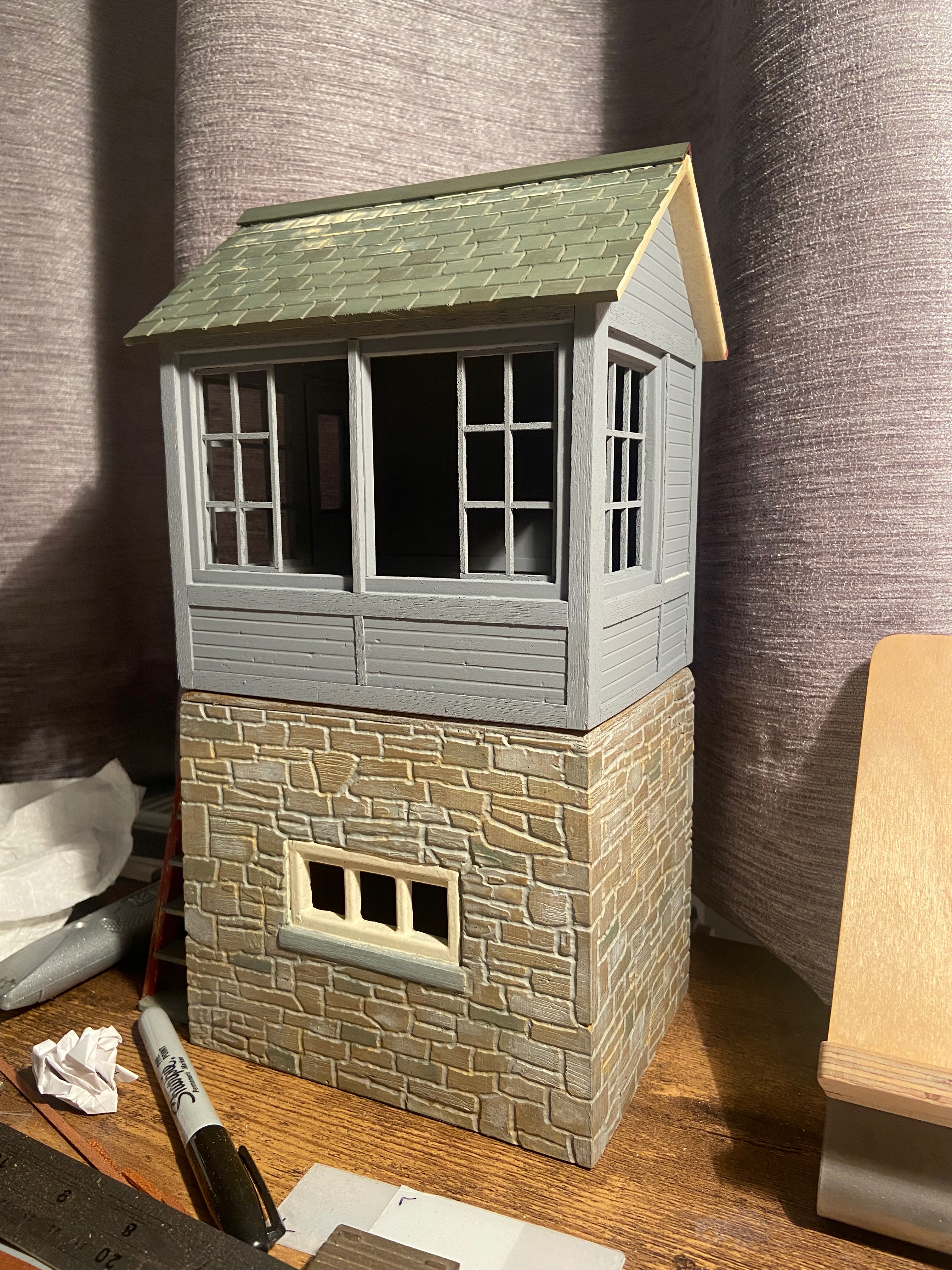 It still needs more sanding and filling but it's getting there!

Coming on well, George. The corner quoins look really good, it's a detail that often gets overlooked and can really spoil an otherwise nice model.
Philip
www.tinyurl.com/philip-trains
Top

That's looking very good indeed - the sliding sash windows are seriously impressive! I bottled out of those when I came to make the windows on my 'box - although mine's been re-purposed as an aviary for the station master's canaries, and I don't suppose he'd be too pleased if the windows were left open...

This is looking really good.


steamgeorge wrote: ↑
Thu Jan 06, 2022 11:51 am
Looking at prototype photos for inspiration I had noticed that almost all signal boxes had sliding sash windows. Also, I always like it when doors, windows etc are modelled with the ability to be opened and closed. I thought it would be nice when, for example, I'm running trains on a hot day, to be able to open the windows on the signal box - adding a nice bit of authenticity to the scene I feel. So with these criteria in mind I set about head scratching.

Fantastic. What I love about this forum - people here who are willing to take perfection, and improve on it

I appreciate all your kind words! Its about time I contribute something to this wonderful forum!

Anyway to continue the build...

To finish the roof I now needed to replace the resin barge boards with wooden ones. I couldn't resist tackling the finials first however! 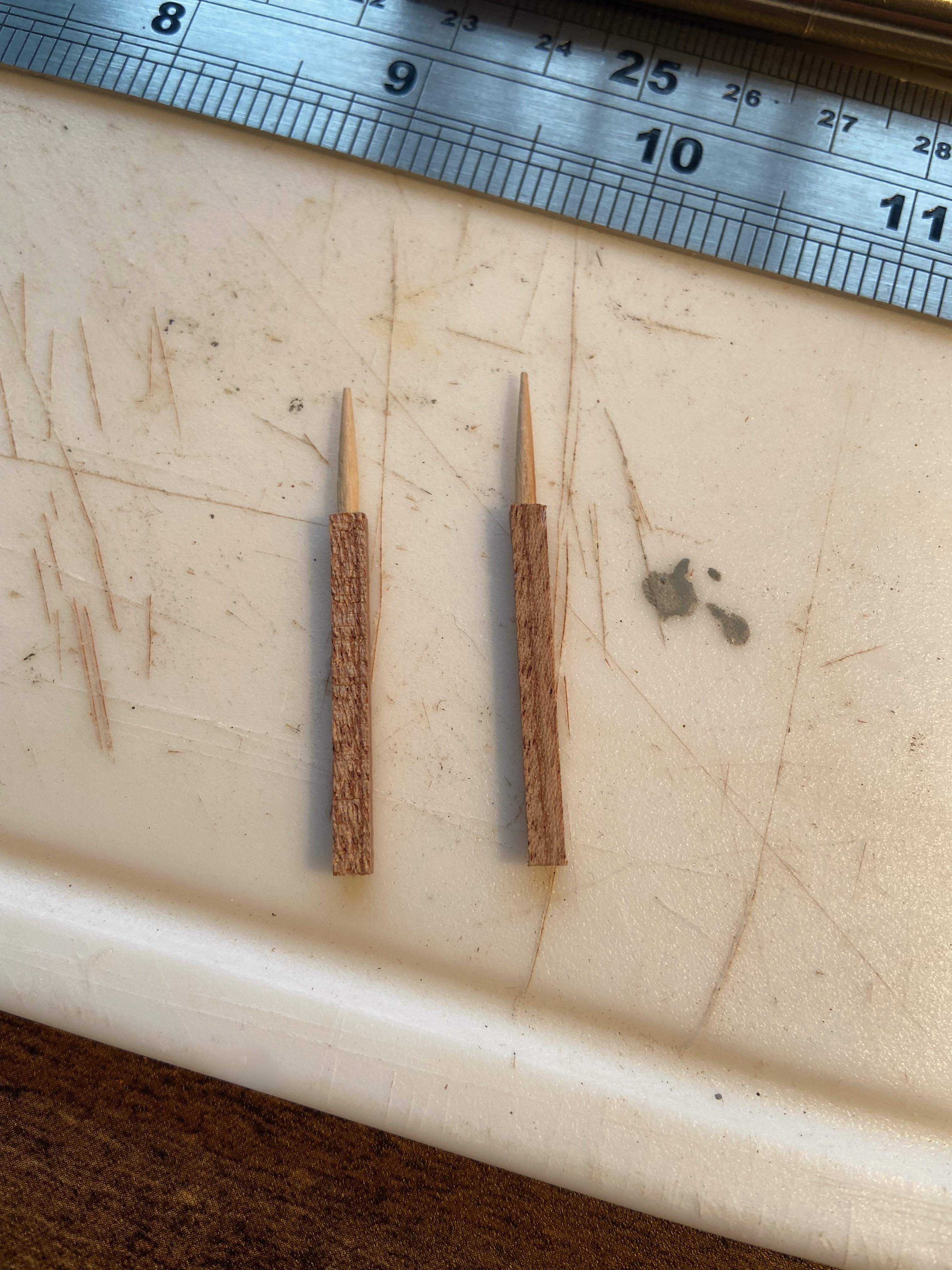 I also added a little carving at the other end

Here is a comparison with the old resin one: 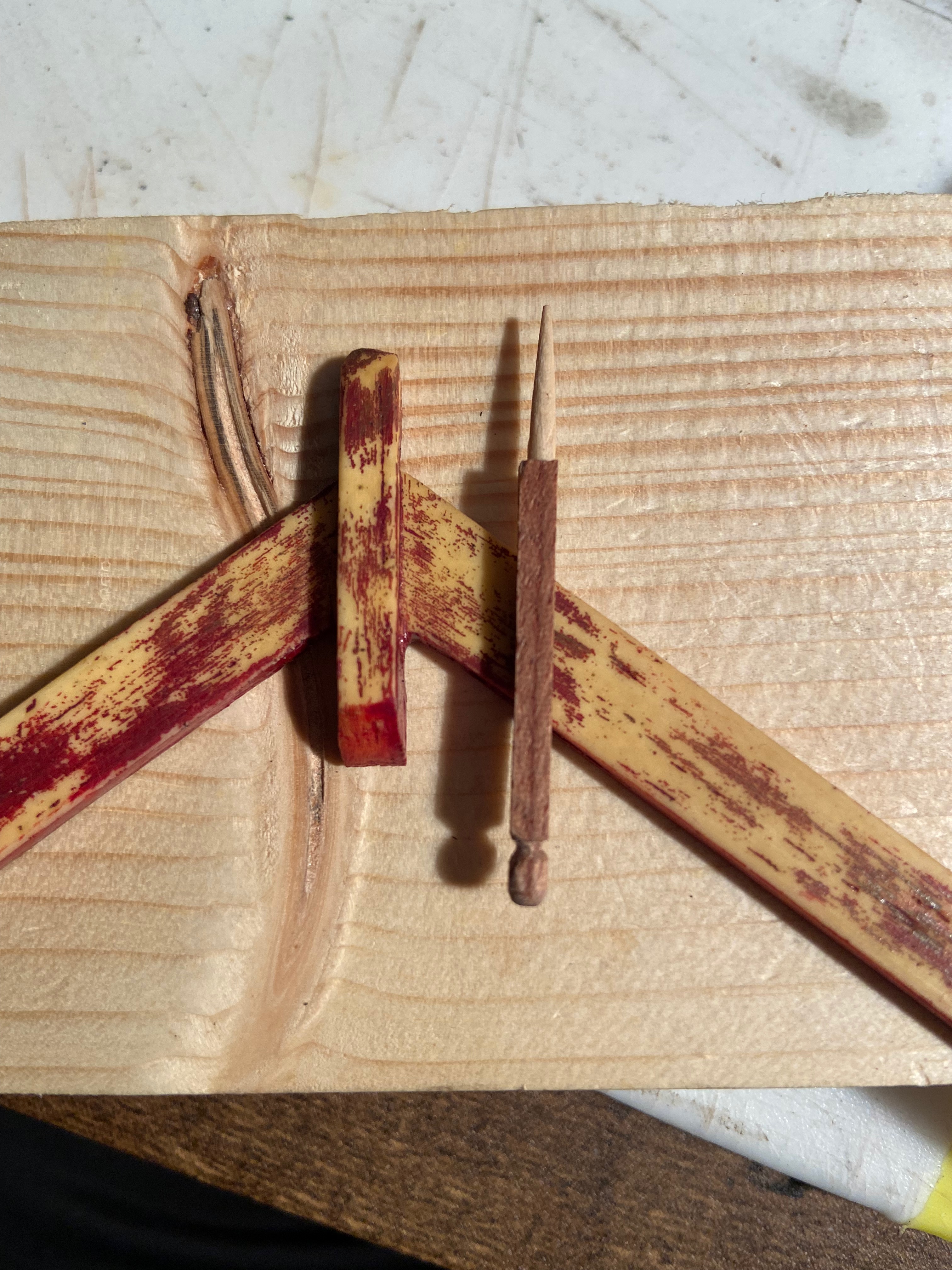 I thought the new finial looked quite vulnerable considering how thin it was however the building is far away from any 'hand of god' operators when the railway is in use so I'm hoping all will be fine! Plus, it will get taken in during the winter months.

Some barge boards were made up from hardwood strip wood and attached to the roof along with the finials: 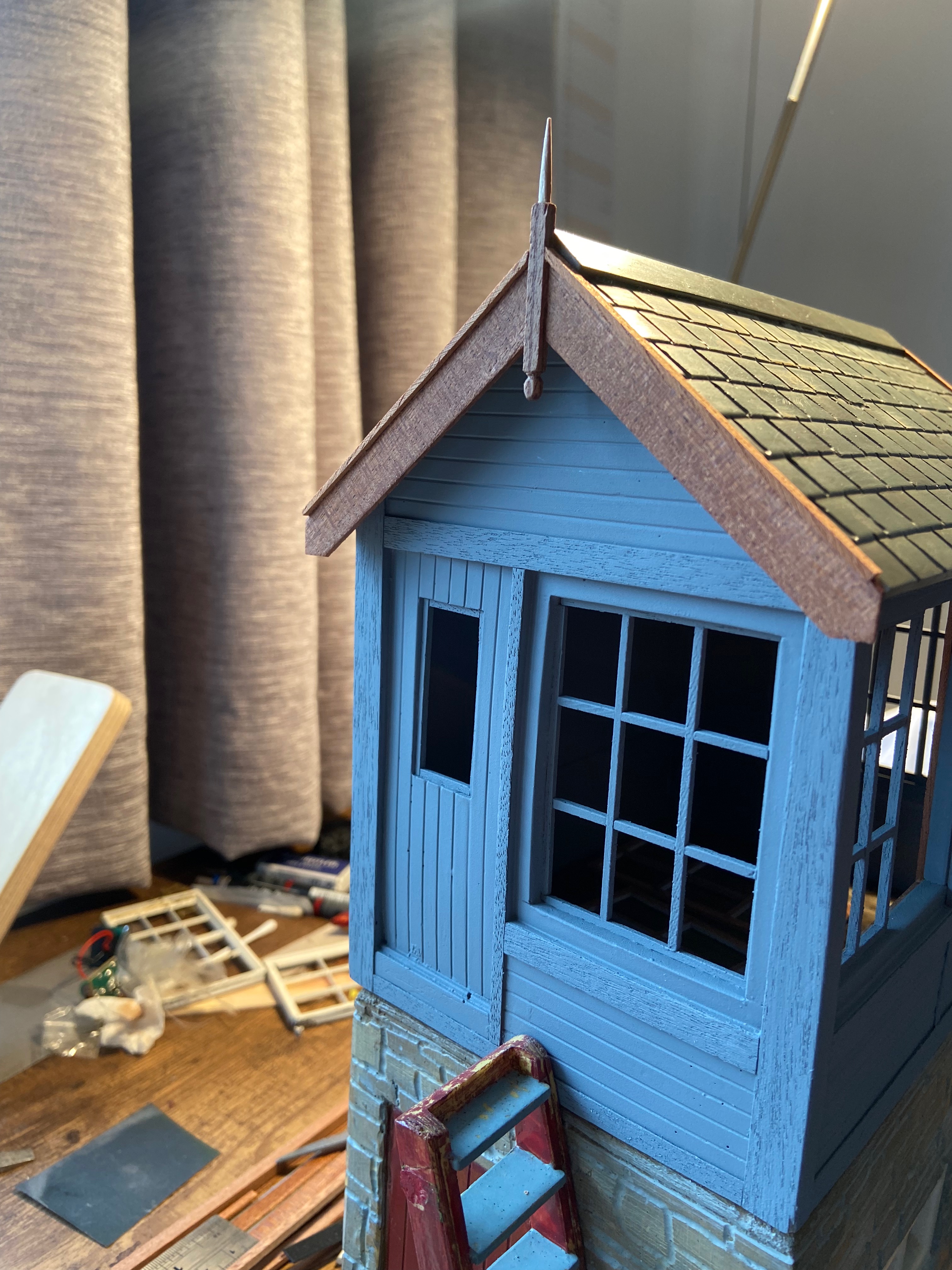 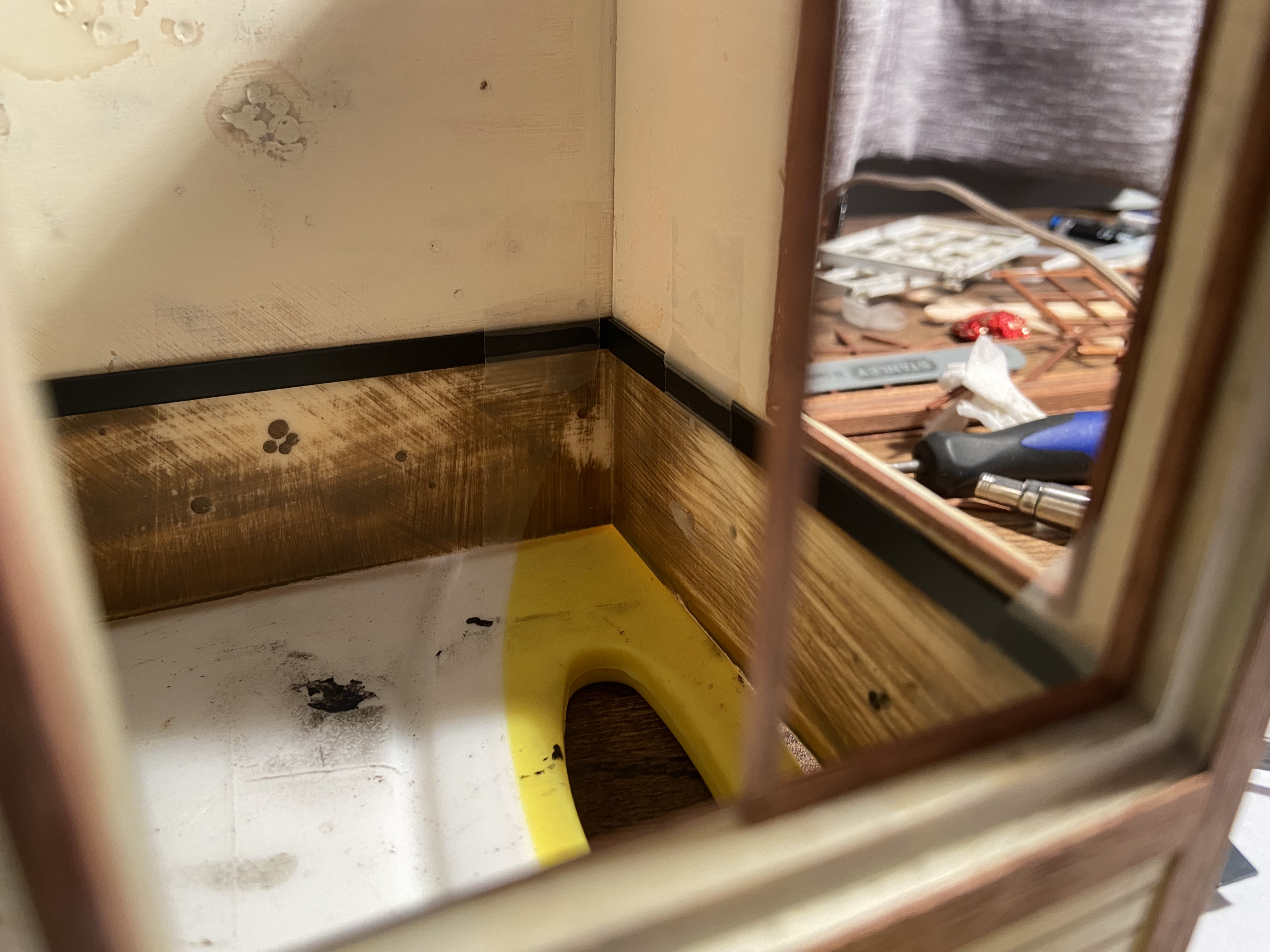 And the whole thing was given a rub down with some sand paper, a de-grease, followed by a couple coats of Halfords grey primer

Here are the results: 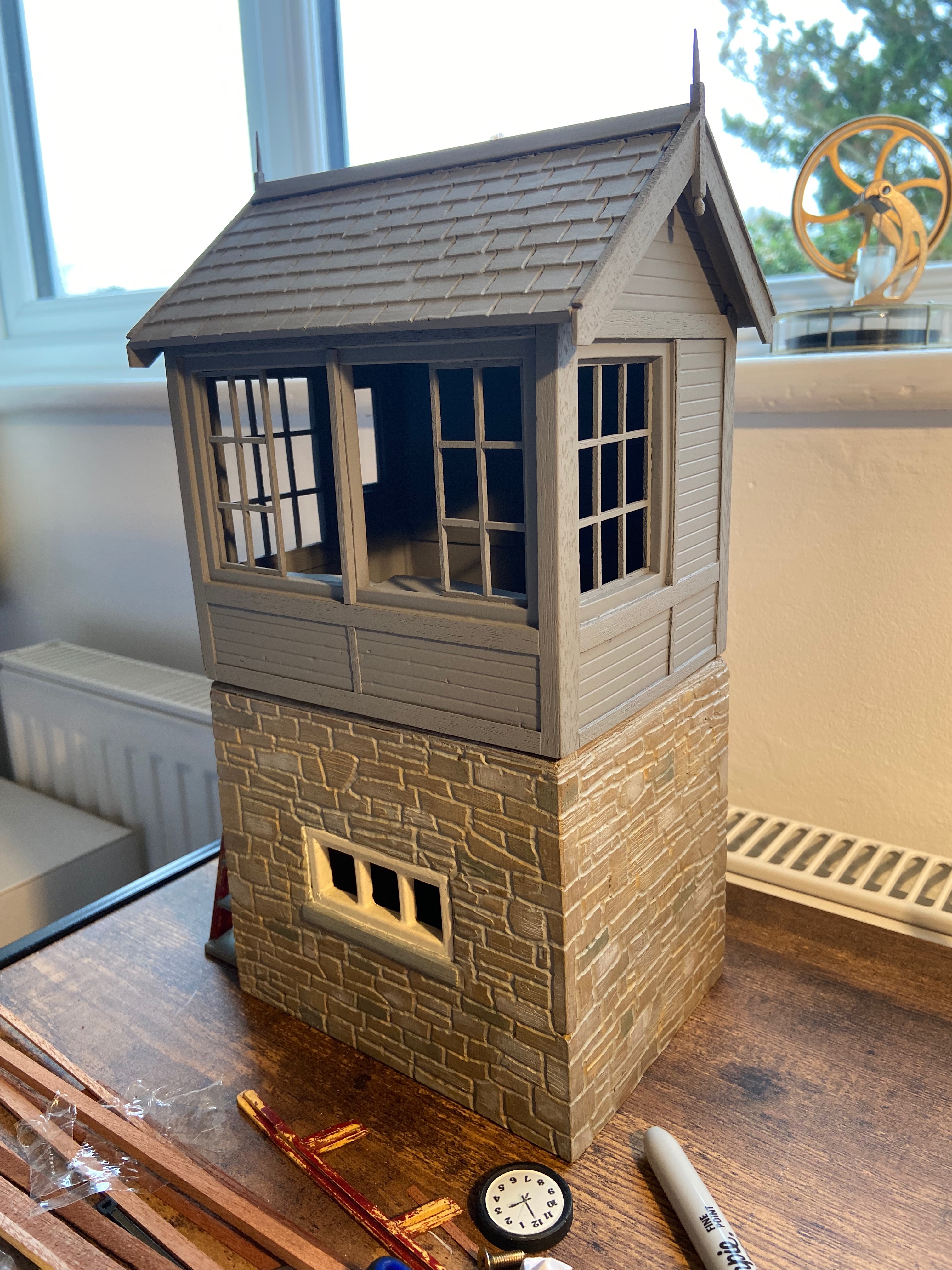 Further coats of Halfords white primer were then added to form a base coat. following another sanding a couple of coats of Precision paints 'SR buildings cream' was added to the panelling to seal it up nicely. 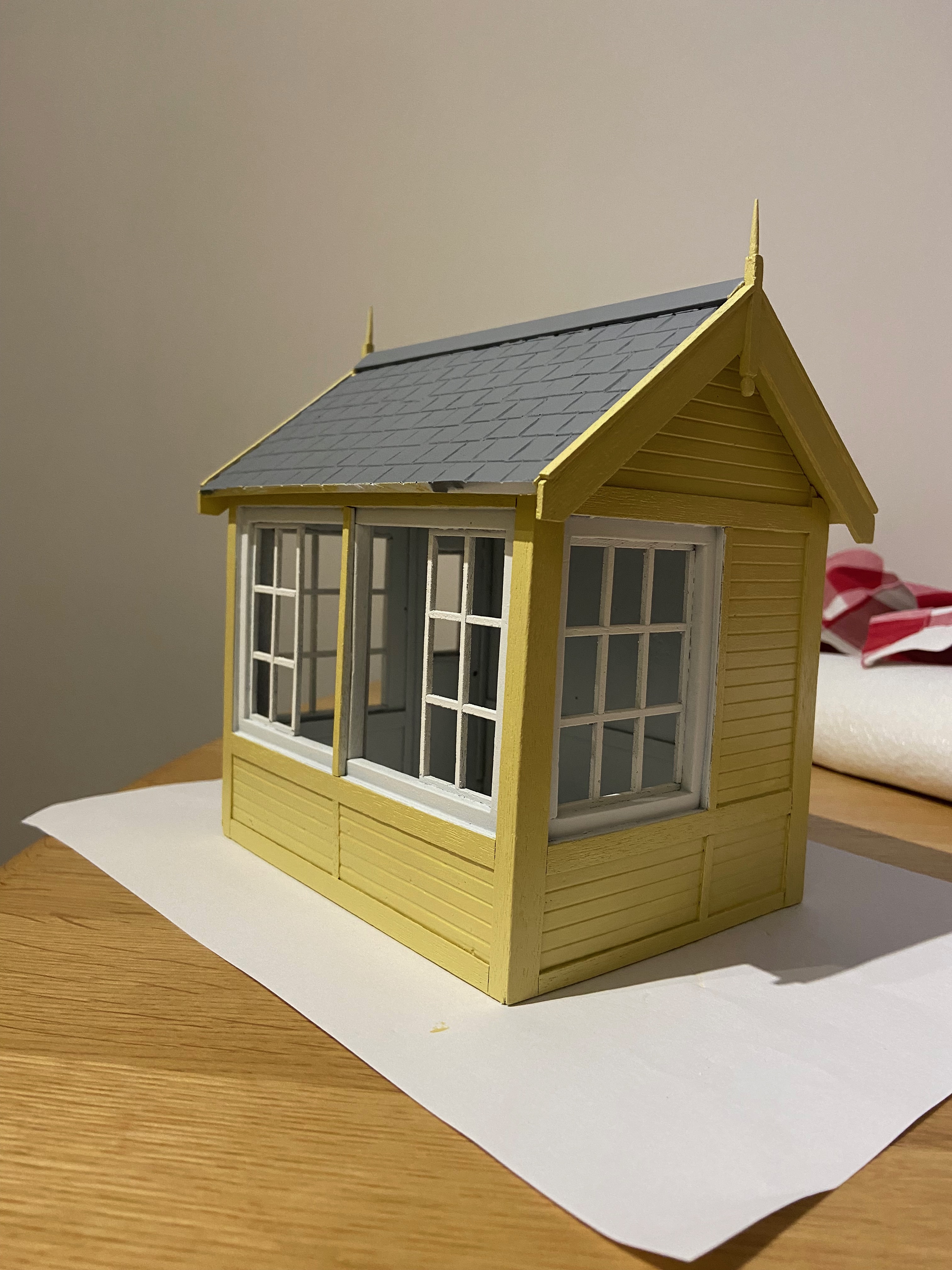 some more photos of the building being trialled on the base: 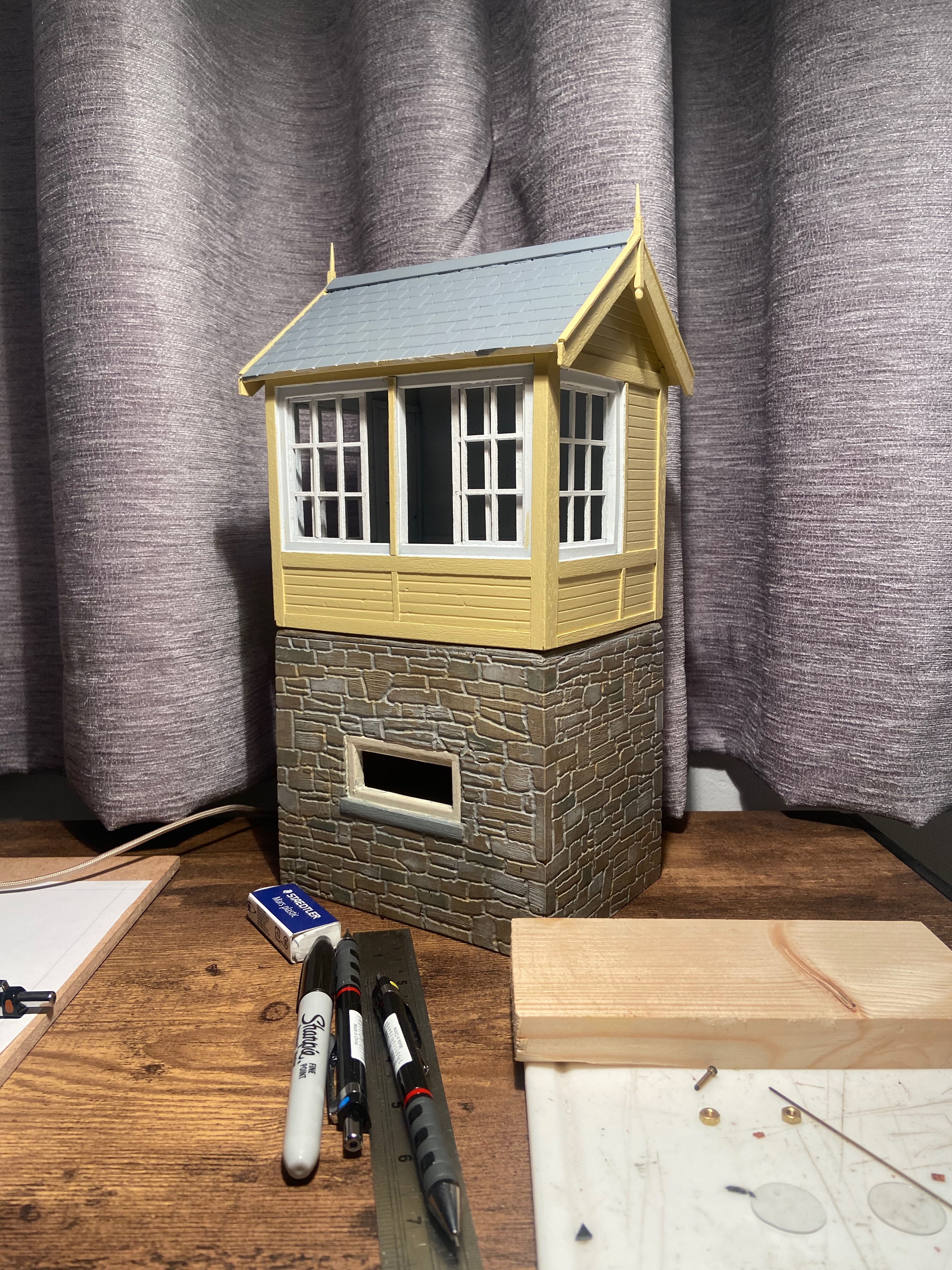 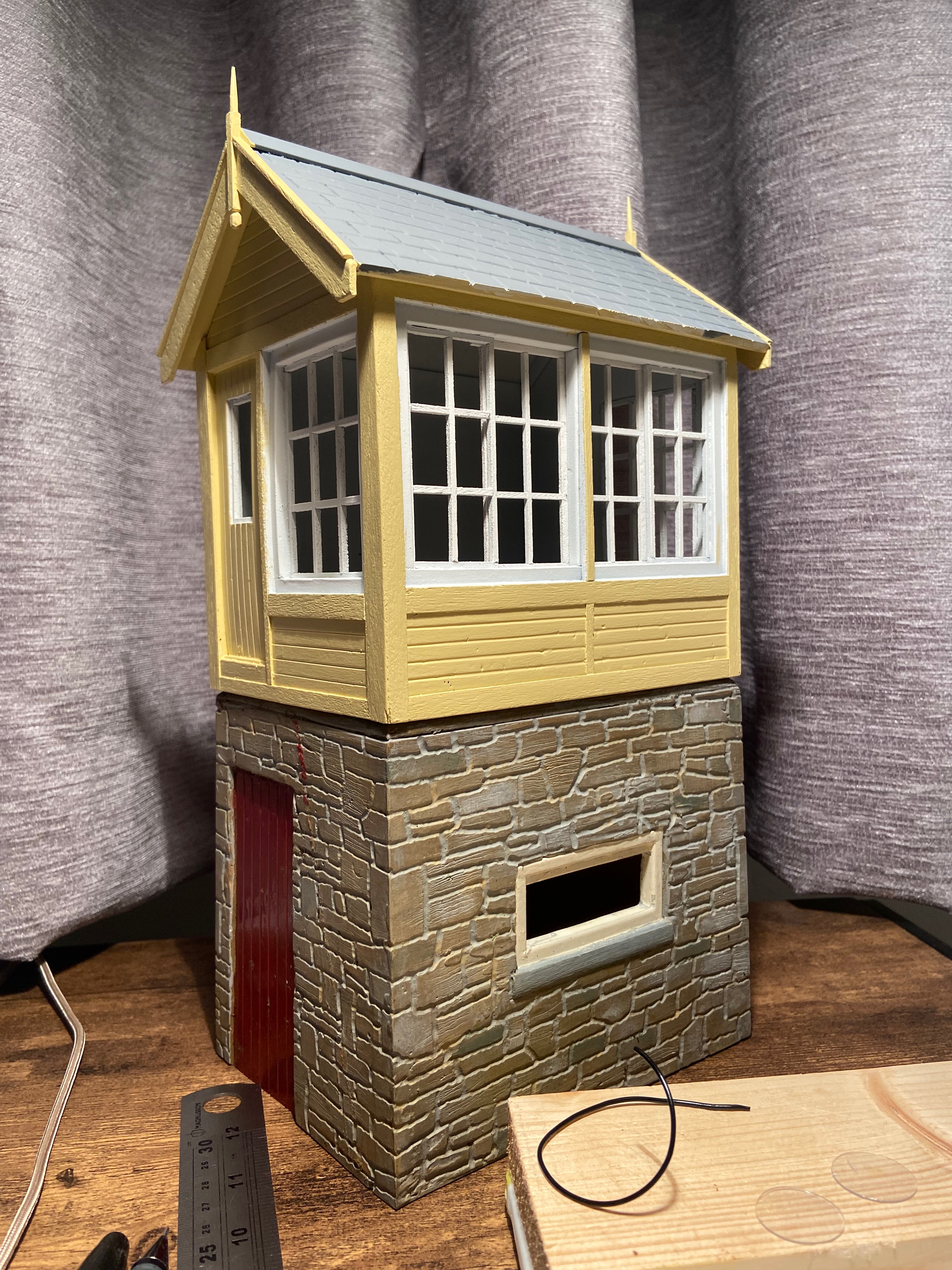 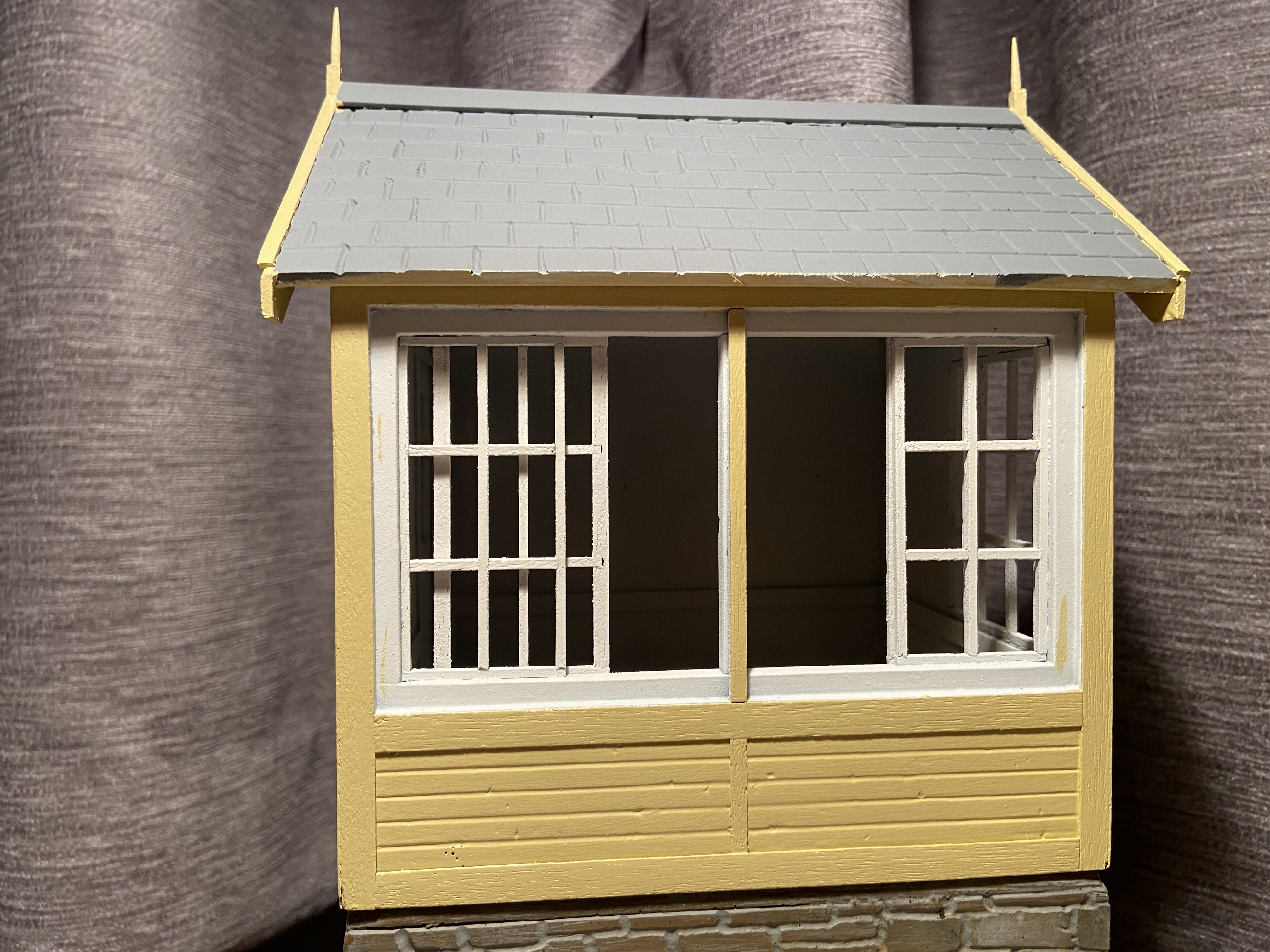 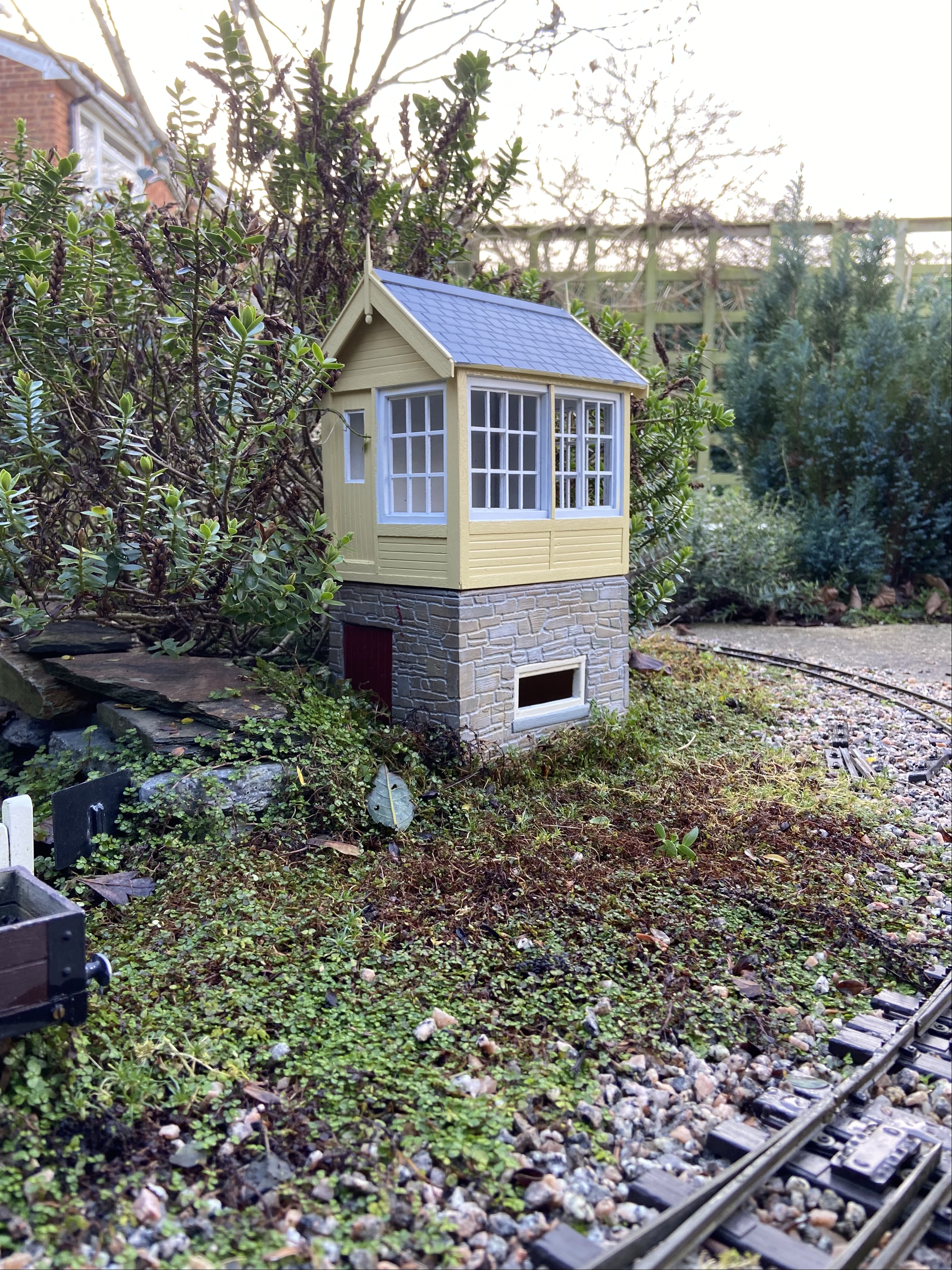 Jobs to do include but are not limited to:

- repainting the door on the base

- adding the steps and replacing the balcony

- do something with the window on the base (Suggestions please! so far all I've done is remove the old frame)

Superb job George, it looks so much better then the original and you have thought about the potential problems of winter weather, so should be OK.
I can't offer a 'best way' to complete your model, just do what satisfies you and that is sufficient. You might teach us something new?
The best things in life are free.... so why am I doing this?
Top

Getting better and better.

For the slates, I'd give it and all ver wash of whatever base colour you want, no need yo worry about streaks if they occure. Then add small amounts of succesively lighter or darker colour to the base paint and pick out a few random tiles with each variation. Then finally, once it is all totally dry, go over the whole lot with a thin wash of very dark, (not quite black ) paint. this will find the tile joints and just even everything to look like years of engine soot.
Philip
www.tinyurl.com/philip-trains
Top

I find applying the paint (over a good colour base coat) with a sponge gives a good effect, a couple of colours that a similar, and then pick out a couple of slates in these colours.
http://www.tumble-down-falls.co.uk/

One tip I can add about finishing your model is not to use a lacquer or varnish over any paint surface left out in the rain. I learned, to my cost, that water will penetrate and form a misty layer between paint and top coat which can't escape, leaving no option but to re-paint.
The best things in life are free.... so why am I doing this?
Top

I'd just throw some mullions in the bottom window and leave it as a fixed assembly.
Regards,
Aaron - Scum Class Works
Top
Post Reply
15 posts • Page 1 of 1