Actually no Andrew, a rough check with the spirit level off the mainline which was level originally showed a drop of 12" over 29ft. I collected more track (Brass this time) yesterday and once laid I may have a better idea. Load tests showed the lumberjack starting a load of 5 bogie wagons, including two log trucks with three real logs a piece which are quite heavy, on the grade which is more than will ever be pulled out of there I suspect, so convinced me to go ahead with the idea.
Grant.
Top

Sound, practical engineering at its best Grant. I love it!

keep up the good work

A small gathering of interested parties were there to witness the first load of sawn timber to come from the new Gray's mill site. It was a wild and windy day but the press were there taking photo's as the loco sat in the Warringine siding. The tramway construction lagged behind the building of the mill and there is a small backlog of sawn timber to go to Leawarra hence the Sunday opening. 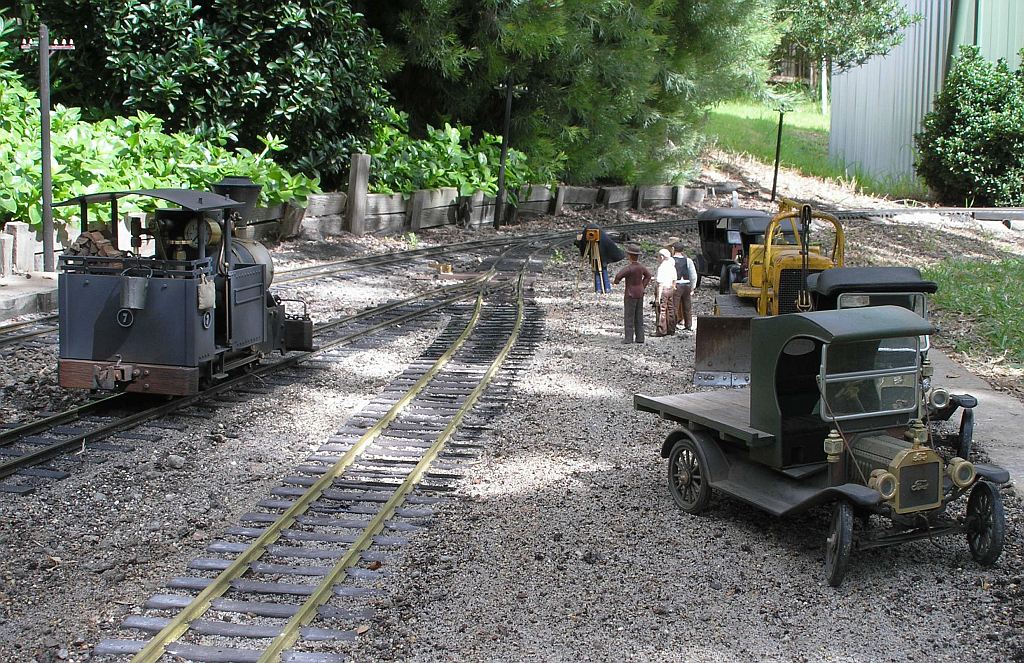 The camera caught the loco bringing up the first load on the new trackwork, there are no run-round facilities at Warringine so the loco pushes the load up the grade into Warringine. 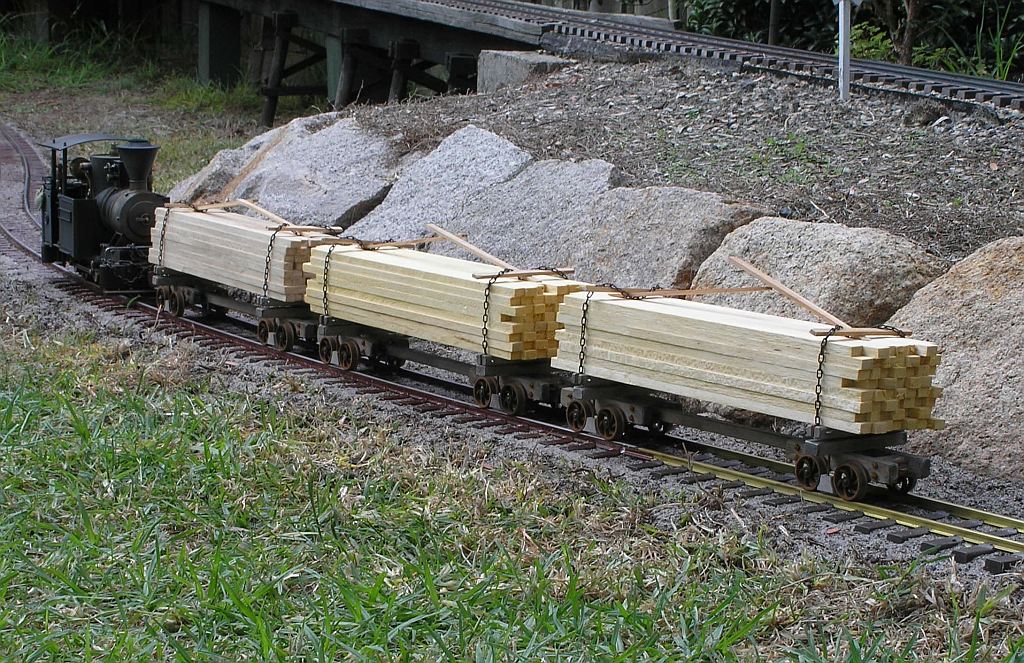 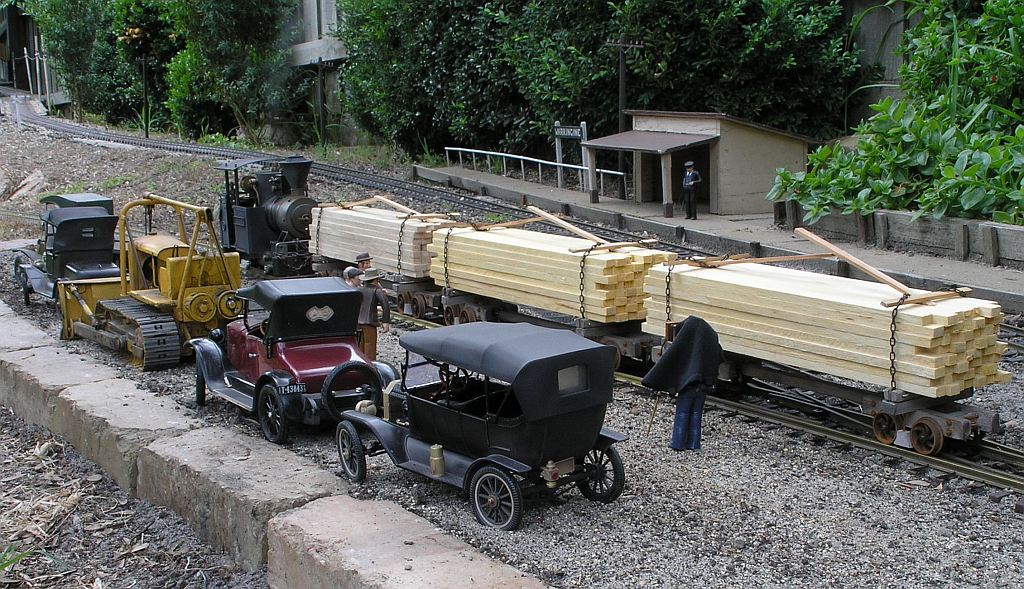 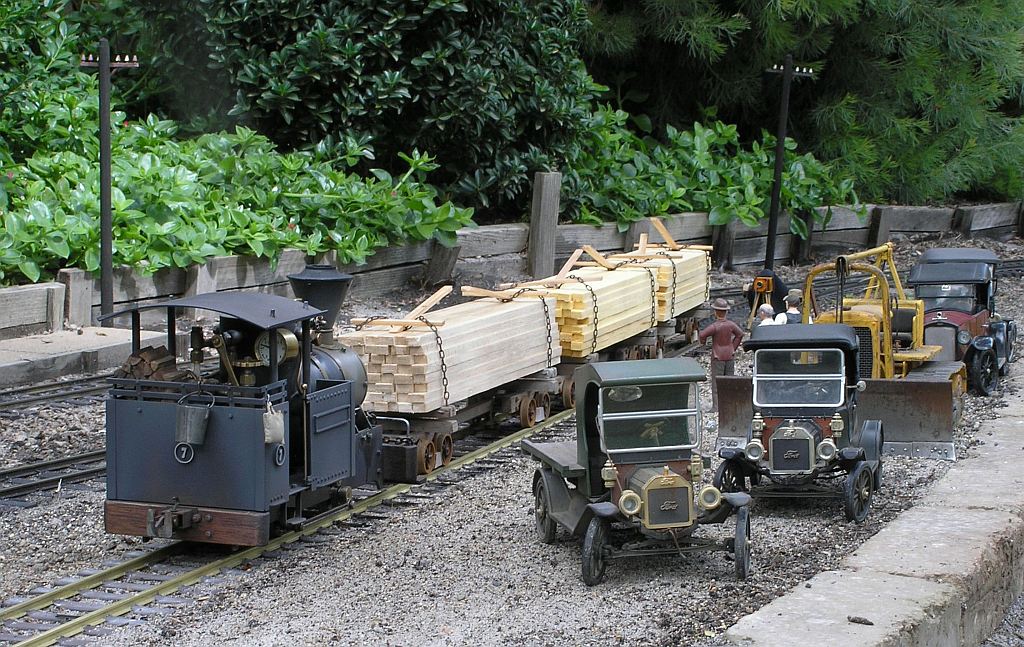 The first load on its way to Leawarra. 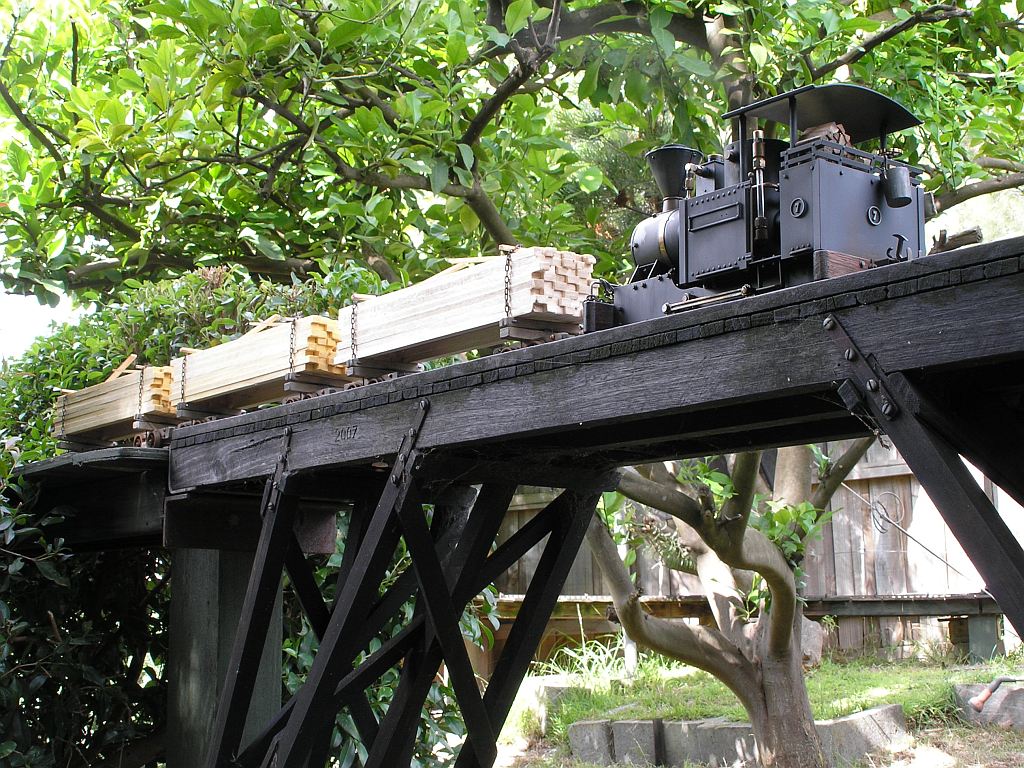 Later in the afternoon the loco returned with empties, by which time most had gone home. 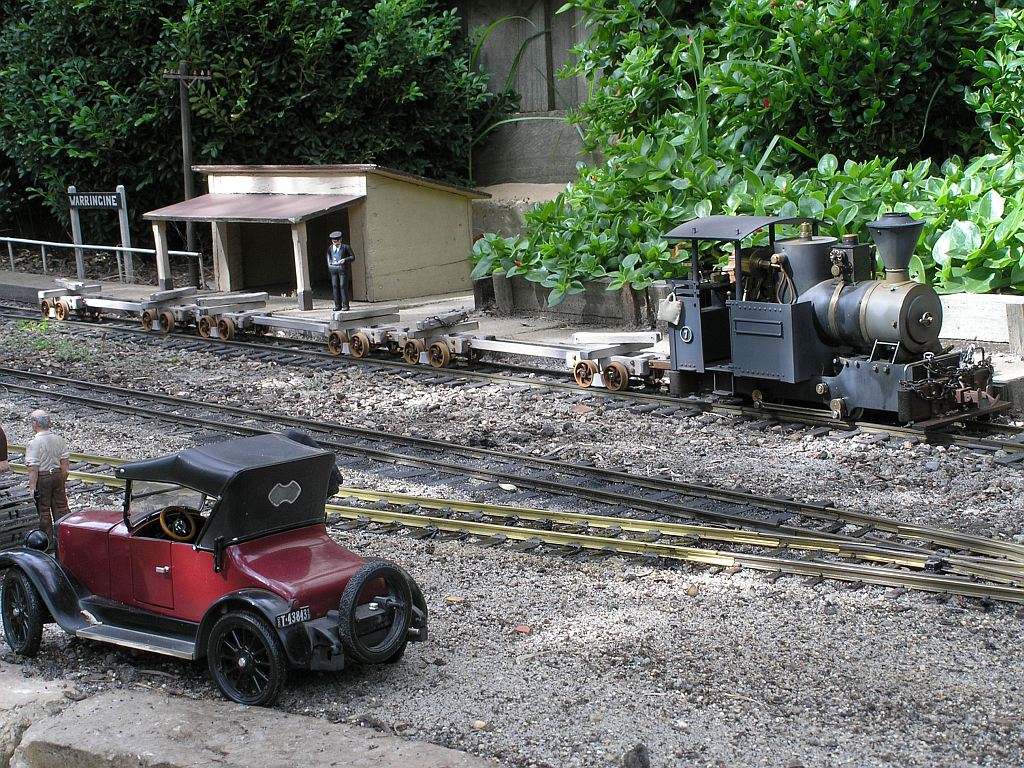 The day seemed a success, the engine crew said they did have trouble maintaining a fire in the gale force winds.
Grant.
Top

Superb Grant, I can't wait to see a copy of the write-up as printed in the local newspaper, the photographs tell a wonderful story.
The best things in life are free.... so why am I doing this?
Top

I really enjoy how the trains on your line seem to do a real job of work...

Got this knocked up today. To be continued!! 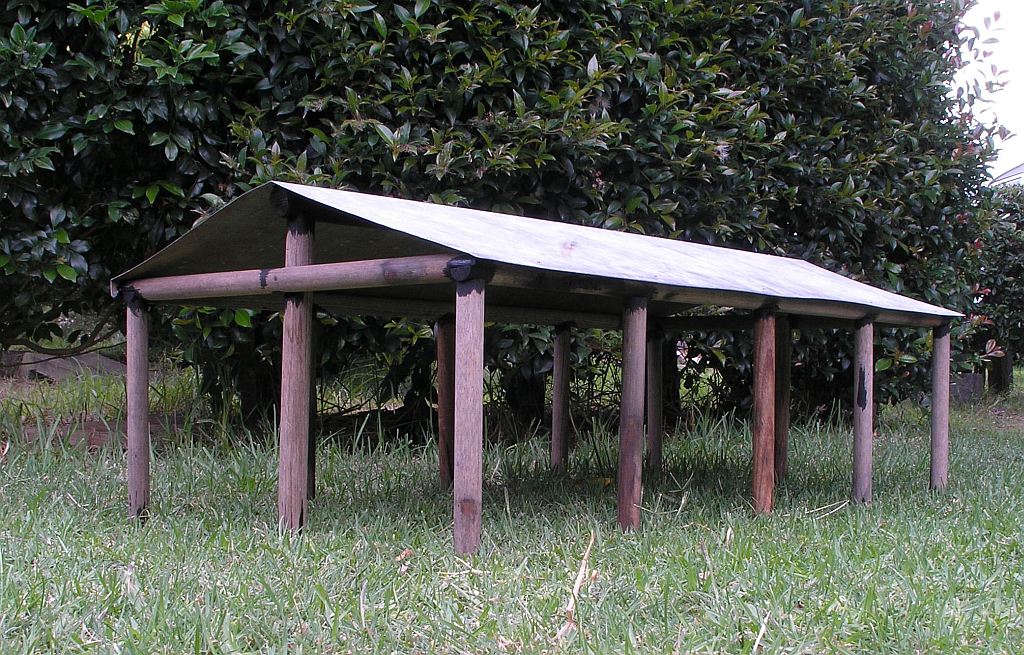 Now who is being tantalising??

Another great set of pictures, Grant, telling an interesting story. I like the way the photographer's cloak appears to be blowing about in the wind. That flatbed Model T looks great too. Is that off the shelf or a bash?

Rik, thank you, it was really blowing that Sunday,


A bash Rik, bought as this 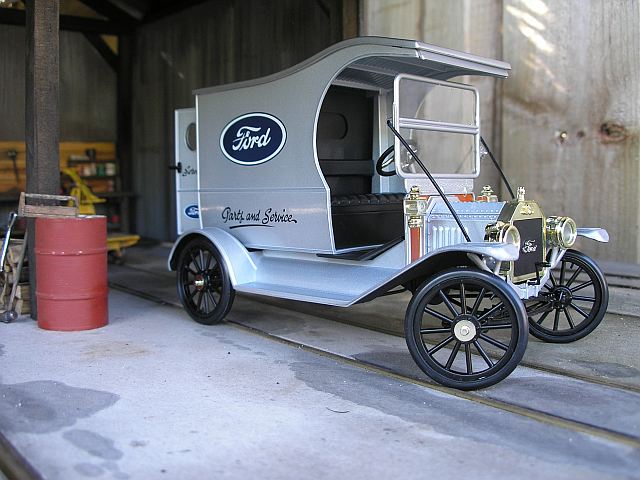 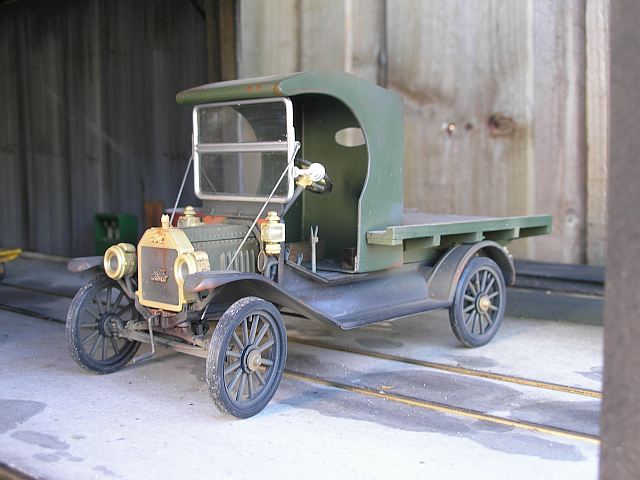 and the left over body into this 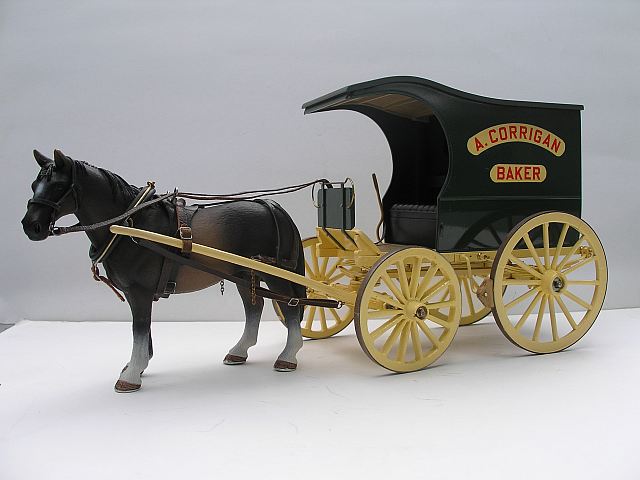 All detailed in "Scenery"
Grant.
Top

Excellent all round, Grant. I especially like the horse drawn cart. Having just made something similar (though not quite as good), I recognise the amount of work which must have gone into it.

As always Grant, I'm thoroughly impressed with every aspect. It's a lovely operational addition to the LNR.

I look forward to seeing more.

Can't believe the saw took all day to make. Although I was half way through the teeth and made a blue and had to start again. One down one to go if I'm to make it a Twin Rig, which would be typical for my time frame.
The axe man was given to me as a Schleich prospector/miner with donkey. After removing his gun and holster, bedroll on his back, and water bottle, I turned his sombrero into something a little more Australian, and gave him an axe instead of a shovel. 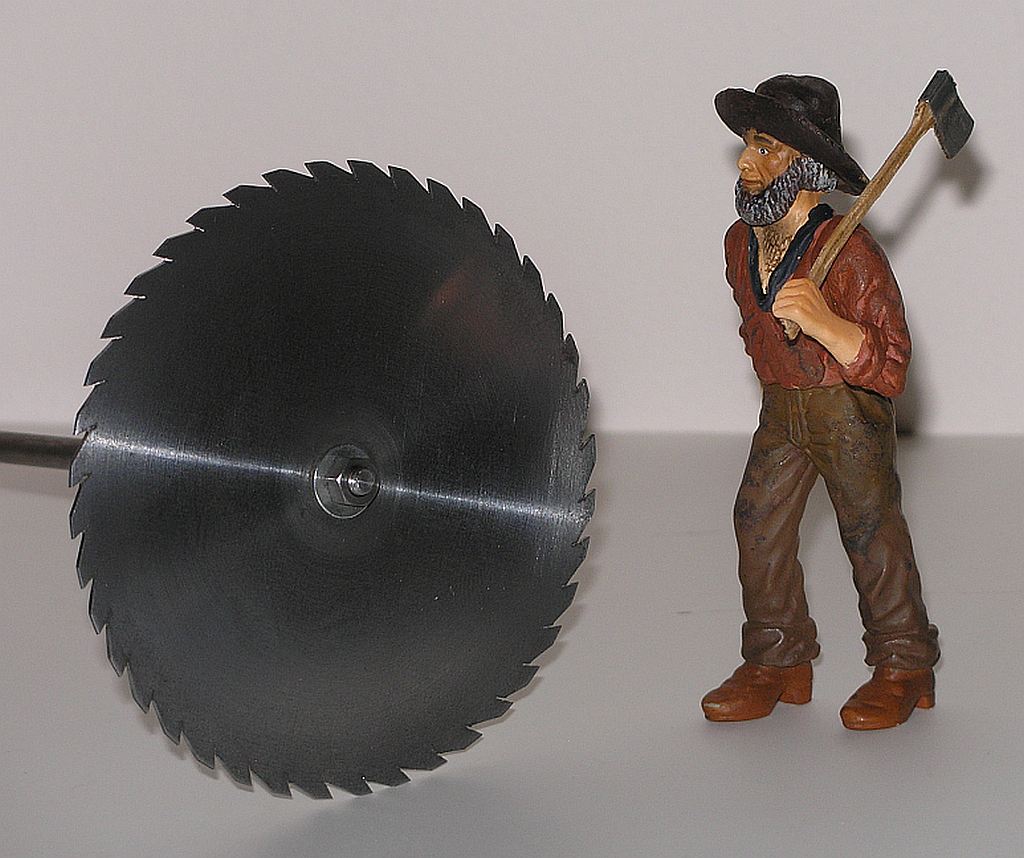 That saw blade is incredible. I can't spot any inconsistencies in any of the teeth. Reminds me of early clockmakers who used to cut the teeth of every gear wheel by hand.

The lumberjack looks spot on too! Even down to the grain on the axe handle!

Thanks Rik, the blade cuts plywood, but I reckon their saw doctor was drunk. Shall go through the teeth again tomorrow, I can see some that need a touch of the file. Wondering if my saw setting pliers will work on something this small !!
Grant.
Top
Post Reply
517 posts

Users browsing this forum: No registered users and 7 guests