I have used this firm for my lettering in the past, I found him through my boat modelling activities.:-

Thanks for that Dave, personally I have limited requirements but I can pass this on to our Club Members who do boats, 'planes etc.... I'm certain they will be delighted!
The best things in life are free.... so why am I doing this?
Top

Peter Butler:112136 wrote:Alan, I have described the long and frustrating search I had for suitable lettering elsewhere on this Forum, but briefly it was specially made for me by a local printing company.   It was drawn out to my design and size on their computer screen then produced in a laser cut A4 white vinyl sheet so the letters simply peel off and are self adhesive.
The whole thing only cost me £12.
Originally I had two sizes on one sheet but in practise only used one of them, so I will now order a full sheet of the smaller size.
If one printing company can do this there must be others!

They look just right. I must investigate our local printers to see if they can do something similar.
Alan.

We are lucky enough to have a vinyl cutter which does the trick and I can vouch for the letters longevity. One of my sets is entering its 5th year!
Top

That's good news Matt, it both looks good and seems a sound investment! I have already ordered more and a numbering sheet too.
The best things in life are free.... so why am I doing this?
Top

Thought I'd post a quick update, mostly out of embarrassment:

My little "momentum" wagon, while it served its purpose as a test vehicle, was far from my best work, which at the best of times after all is rather amateurish. The wheels were too close together for one thing, and the IP engineering body was just thrown together and painted with primer. I thought I could get used to it, but it just looked substandard, especially running along with my almost-complete Brandbright coach and modified Billy.

Therefore, I tore it apart. Then I mounted the axle-boxes the proper distance apart. I took the un-geared axle out of the "Zecar" chassis and built a support bracket in the middle of the sole bars that looks like the hangers for a hand-brake. A rod between these hangers holds up the axle-less end of the Zecar.

Then I used brass pins to make rivets replacing the lasered-on dimples IP uses to represent rivets. Then I used a drill bit to scribe a grain pattern into the simulated planks. This and the rivets took some time.

Then I painted it a sort of green-grey colour that is actually etch primer but I thought the colour looked "railway-y" so that's what I used.

Here it is, finished. I think it looks much better. I was a little ashamed of the slapdash initial effort but now the wagon looks OK with my nicer rolling stock. Plus you can't really see the zecar anymore. I also added a bit more weight. It performs just as well, or a little better, than before. It seems not to matter as much which end is coupled to the locomotive. 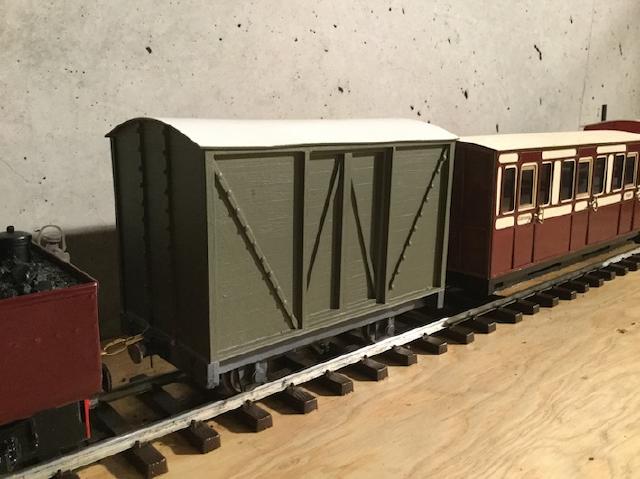 I've also built myself a momentum van in a desperate attempt to make my Accucraft Leader behave itself on my little space constrained line. To add to the tight (mamod track) radius and aesthetically pleasing but train unfriendly reverse curves, there are also unplanned gradients that can cause a train to run out of control into a tight curve.

My van is almost a duplicate of Keith's van above although in 32mm rather than 45mm. The zecar powered axle was cut to length to directly replace one of the the 32mm axles that came with the IP Engineering kit.

The good news is that the momentum van seems to have done the trick! I can now leave the engine running loops around the track for twenty to thirty minutes with no operator intervention needed. Here's a little video of the van taming my engine:

So pleased with this as it is going to make running live steam on my line far more pleasurable than it has been in the past.

The van seems fairly quiet as well when running in the train. I think the gearing being well oiled is the most important aspect for this though I have also put some sponges inside the van to try to reduce the noise. I also have a heavy metal rail track pin that I've put in as extra weight. The final van weighs 880g which seems to work well.
Top

That looks good - and the effect on the loco is fantastic, well done!

What a fascinating topic I don't know how I managed to miss noticing it.

I would imagine that a MV would work just as well with battery locos that only have the most basic speed control on board. After reading through this thread I've already checked out where I can buy a zecar which I shall do when my model making budget recovers a little.

With the zecar wheels how easily do the tyres come off because I think those wheels would look very nice re-purposed on a Ewings monorail loco.
What has Reality done for you lately?
Top

I've just been taking the wheels off my Zecar, gripping the axle with pliers and tapping at the wheels with my little toffee hammer. Only I missed - and now I've broken the plastic gear in the middle, grrrr... It's a clean break so I'm going to try to fix it with 5 minute epoxy... Fingers crossed...

Your post reminded me that I had trouble there Annie - so I delved back down the thread and found this! As I recall it wasn't actually that difficult, I was just a little careless. And the wheels all came off unharmed...

They are just a push-fit onto the axles. I think with a little cleverness you could incorporate the little flywheel mechanism right into a battery chassis- they're cheap enough to buy several anyway. You could perhaps guid a small electric motor right into the Z-car chassis and power the flywheel directly.

Crayfish your video is great. I wish it was a bit longer. I am happy that others have tried this and it works. I only have a workbench to test mine on and while the results are encouraging, it's hardly the same as seeing how it will run on an actual railway with curves.
Top

I have used this firm for my lettering in the past, I found him through my boat modelling activities.:-

I think you will find that it's .co.uk and not .com
Top

Keith S:115553 wrote:Crayfish your video is great. I wish it was a bit longer. I am happy that others have tried this and it works.

Once it is finished I will take another longer video, hopefully including some stopping and starting. I'll also try it with a battery loco to look at the effect it has there.

I can't help feeling there is a viable commercial product here that one of the specialist garden railway suppliers could pick up on.
Top

Wonderful to find that MVs are still developing and helping others to enjoy their manual controlled locos more! I recently made a film for the 16mm scale DVD using it and it makes life so much easier when filming in the garden. Sadly I can't put it on YouTube for all to see but 16mm members will get to view it in February. Has anyone tried multiple MVs in a train?

Of course the flywheel van can still get up to a pretty high speed if it has enough of a run. I saw a picture of a "brake van" once that used a spinning governor inside the van to apply and release brakes at a predetermined speed. A combination of a flywheel van and such a brake van, perhaps with a speeder spring adjustable via a dummy ventilator on the roof, would be tantamount to an automatic train control. It might be even easier to use an electronic brake in the van with a revolution-counter on the axle- like the one DeWinton Dave used for his steam engine controller...you wouldn't even need gears at that point.

This is getting pretty fancy, I realize, but it's important to me personally to keep batteries, plastic and electronics off my live-steam locomotives and if the train itself is so equipped, it doesn't bother me as much for some reason. A couple of equipped wagons in the train could even be enjoyable for R/C proponents who sometimes like to "switch off" and leave the train to its own devices too.

I really like my little MV, now that it looks better. One thing the van gives you that a flywheel on the locomotive itself does not is on greasy rails, when my locomotive boils up and starts moving on its own, sometimes it experiences some wheel-slip until the train starts moving- very realistic! I am really looking forward to getting some track down next summer so I can see it in action on a proper route. I might even temporarily resurrect my "Joliffe Island Railway" if necessary.
Top
Post Reply
159 posts