When modelling an Australian railway, you can't have too many open trucks. The VR ng lines were a typical example and on the four steam operated lines the total goods stock was 6 guards vans, 14 louvre vans, 15 cattle trucks and 218 open trucks.

The under frames for these five trucks had been sitting around taking up space on the workbench for several years, so they were completed during last winter, then sat around for several months waiting to be painted. Partly waiting for warmer weather and partly reluctance to paint anything, due to the problems I've had with paints over the last couple of years. I eventually bit the bullet and with my recent changes to paint brands, the painting proceeded with no real issues.

The first photo shows the two steel dropside trucks in the course of assembly. One with the basic body fitted to the underframe and the parts of the second laid out. I learnt from the steel bogie trucks built previously and this time the sides are one piece and overlap the underframe, as the previous models don't do this and there is a built in weakness where the sides meet the underframe. 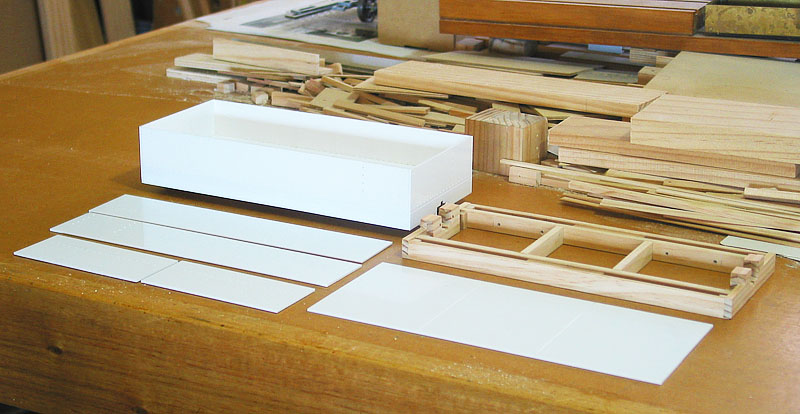 The next photos show how the rivets were added to the polystyrene sides and ends using a modified NWSL rivet press. The press has been modified so both horizontal and vertical runs can be made on large scale parts. The first shows a horizontal row of rivets being punched into a wagon end. 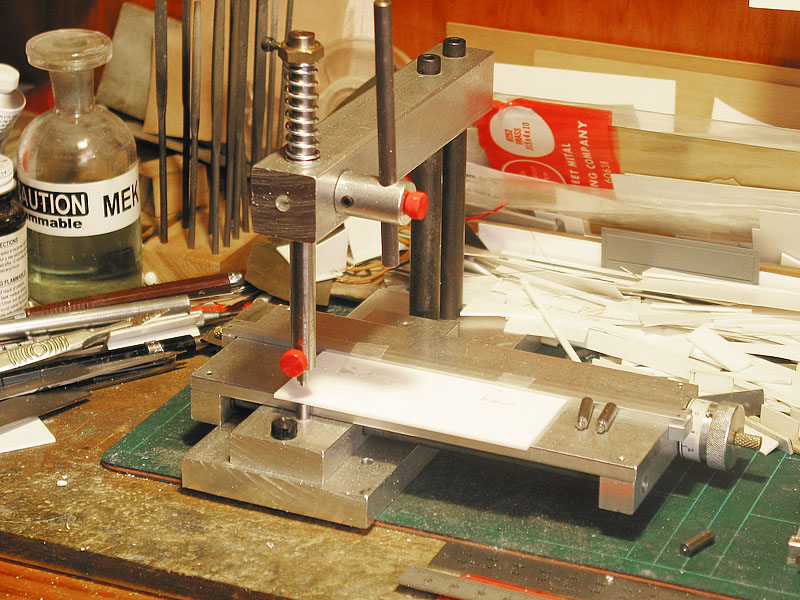 The second photo shows a vertical row being punched into a wagon side. 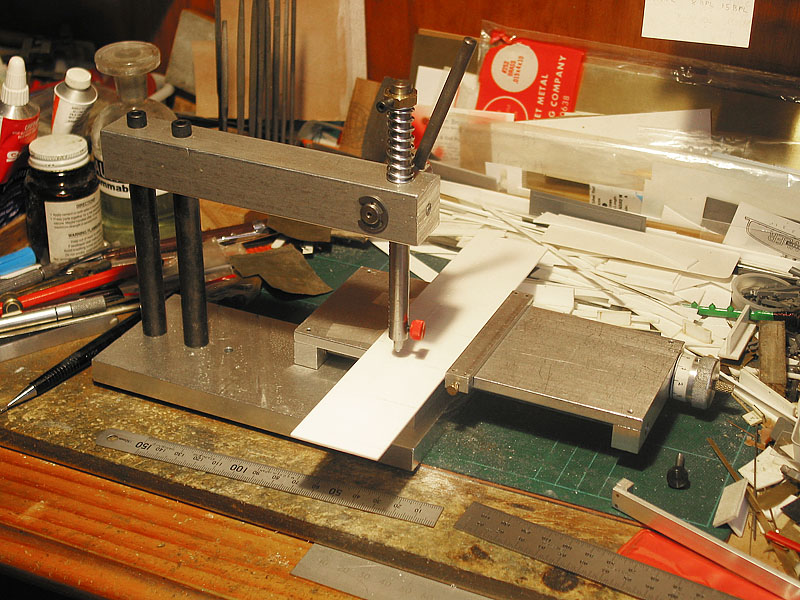 The third photo is a closeup of the bogie steel open trucks built a while ago to show how the rivets turn out when painted. 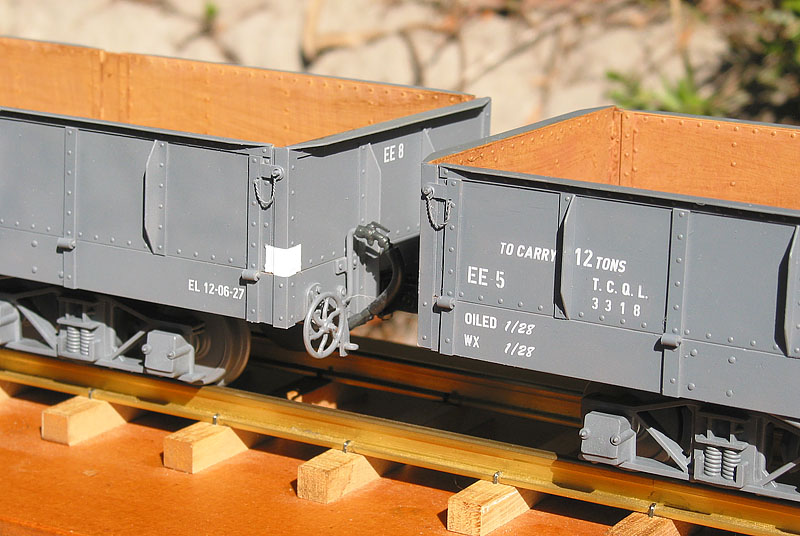 The next photo demonstrates how difficult it is to take a photo of an unpainted model made from white polystyrene sheet. Not helped by the weather at the time, which was grey and miserable with low light levels and little contrast. 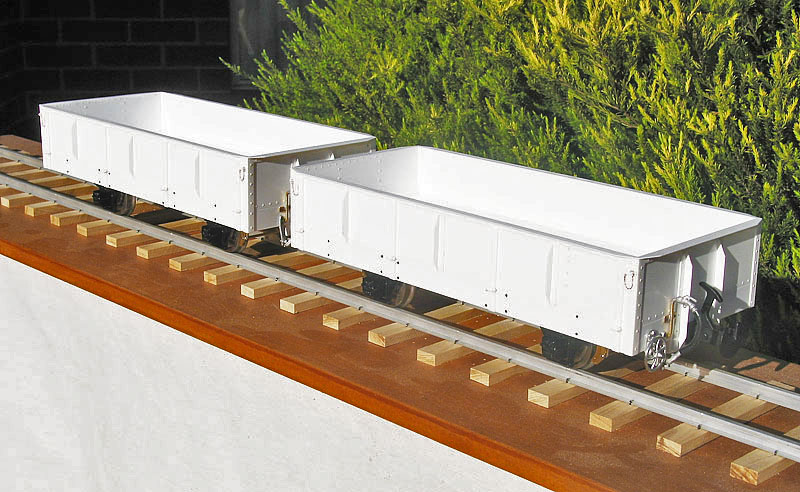 Much easier to see the detail when the photo is taken on a sunny day and the model has been painted and lettered. 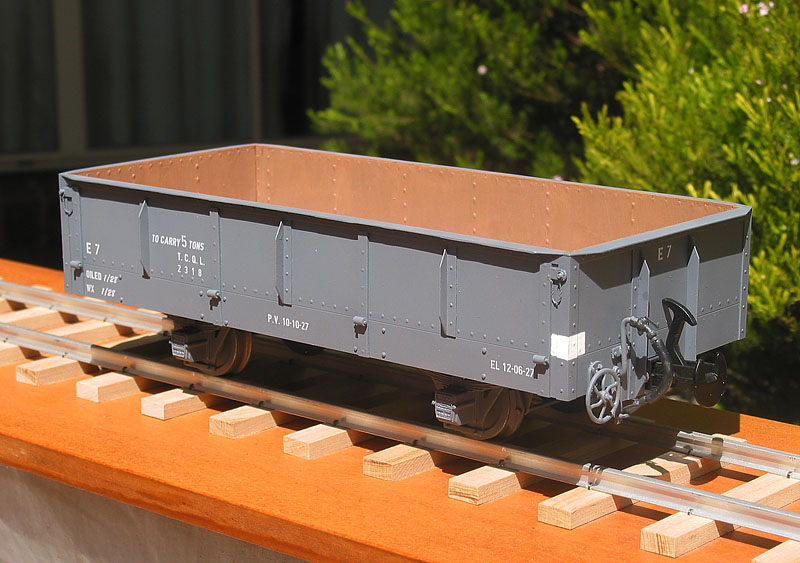 The final photo shows one of the steel dropside trucks with an older model of the wooden version for comparison. 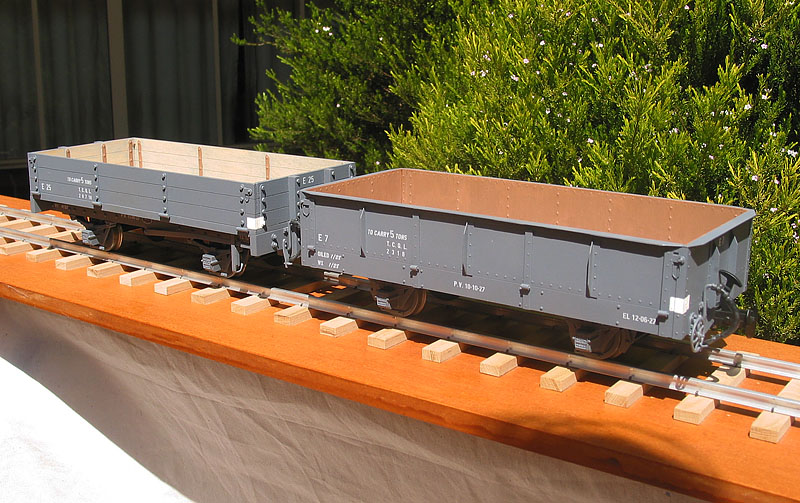 The other three models built were bogie wooden dropside trucks. No particular prototype, but they are the same construction as the wooden 4 wheel open trucks and similar to ones used on other Australian ng railways.

The first photo shows one with the bodywork parts being assembled onto the chassis. I use aliphatic PVA glue for wood (Titebond brand usually) and you can't use too many clamps when glueing up wooden models. 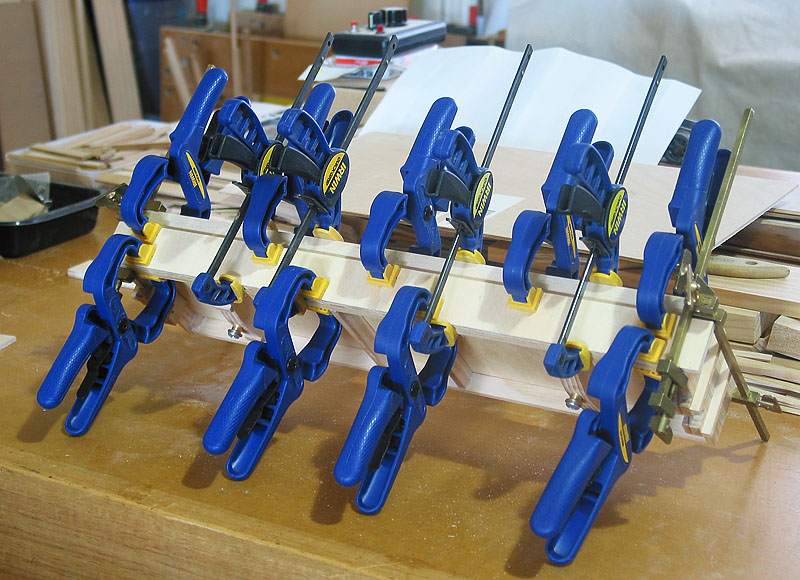 The next photo shows a model assembled and detailed. The stanchion between the two drop doors was fabricated in brass and riveted to the underframe to strengthen the sides. There is a joint between the doors and the underframe and also the doors had to be cut in two parts and joined. 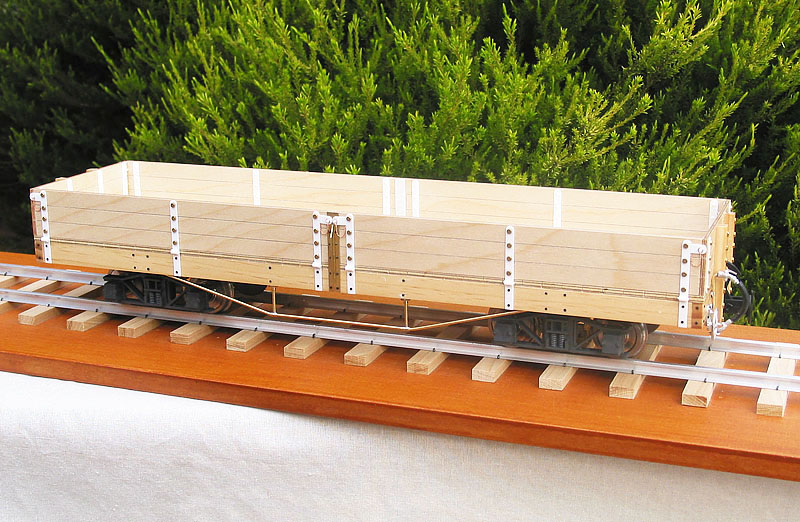 The next photo shows one of the models painted lettered and varnished. 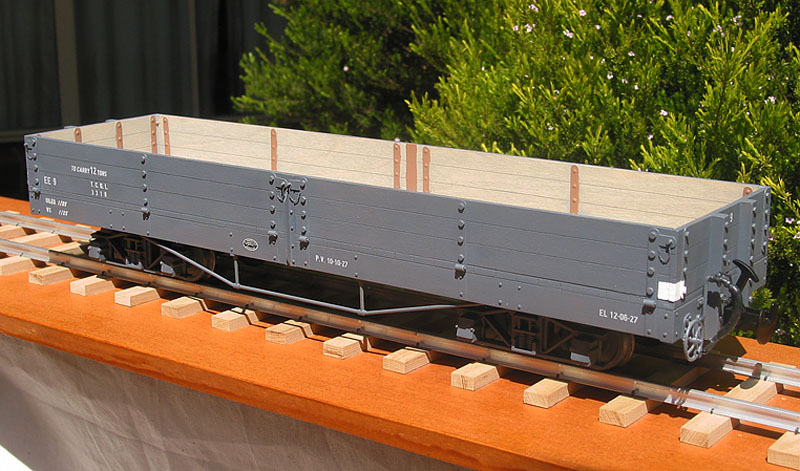 The original TVT rolling stock purchased for building the line were 4 wheel dropside open trucks with wooden bodies and underframes. When the line opened for traffic and timber traffic built up, these were joined by dropside bogie trucks that were effectively two 4 wheel bodies on a steel underframe.

The four wheel trucks had a hard life, especially in ballast traffic and by the '20s some were beyond economic repair. Some had also been lost to accidents, so it was decided to 'repair' them as all steel trucks, based on the design of the VR bogie open trucks. The new trucks were theoretically a rebuild for book keeping purposes, although little remained of the old wooden trucks, basically the old number was jacked up and a new truck built under it. To reinforce the fictional 'repairs', the new trucks were given the same class and the running numbers of the old ones.

A few years later the wooden bogie open trucks were also beginning to need expensive repairs and were rebuilt into all steel vehicles based on the design of the VR NQR trucks. In this case though the original steel underframe was retained and just the bodywork was replaced, so the concept of a 'repair' wasn't quite so nominal as the old 4 wheel trucks.

Fantastic Work Graeme, Those wagons would look nice behind your Garrett.

Modelling of the highest calibre Graeme. Thanks very much for sharing.

How do you cut your timbers to get them so even and square?
Philip
www.tinyurl.com/philip-trains
Top

You should have a long train of nothing but open trucks and a van for the GSSU.
Grant.
Top

I usually rough down clear pine boards from the local timber supplier on my 6" bandsaw and then cut parts to final size on a Proxxon KS230 miniature saw. If the saw blade is kept sharp, the timber needs very little sanding to clean it up.The plywood I use is birch ply from the local model aeroplane shop and that is also cut to size on the Proxxon.

The 'boards' on models of wooden rolling stock are actually scribed into the outer veneer of the plywood using a craft knife and a steel ruler. The scribe line is then raked out with the tip of a razor saw to give a neat and definite line. Much easier to do before assembly, while the ply parts are flat.........

With hindsight, the Proxxon KS230 is a bit small and can only just manage the 1/2" x 1/4" timber for underframes. However it has the advantage of being 1/3 the price of their larger one.

Am I the only one who has realised from this post that you can stamp Plastikard to mimic rivets rather than adding them separately?!
YouTube Channel
Top

Thanks Graeme.
Tom,
I've been doing it for many years in 4mm. It works as long as the plasticard isn't too thick and also is reasonably new. Over time the plasticiser dries out and the sheet goes brittle
Philip
www.tinyurl.com/philip-trains
Top

Incredibly detailed and beautiful work Graeme, faultless!
The best things in life are free.... so why am I doing this?
Top

I agree that those wagons are superb. I am a big fan of open wagons (I had over 100 in my OO days) and am inspired to push on with mine. I took some pictures of the GWR steel sided opens for reference at a recent visit to Didcot. Mine will be scaled down versions when I get round to them. Other projects to press on with first.
Ian
Top

tom_tom_go wrote: ↑
Mon Oct 29, 2018 9:15 am
Am I the only one who has realised from this post that you can stamp Plastikard to mimic rivets rather than adding them separately?!

Adding individual rivets isn't my idea of a good time, so I bought the NWSL rivetter 30+ yrs ago for scratchbuilding in HO, then made larger punches and modified the press when I moved up in scale. You don't need anything that complex though.

There's a couple of posts on here somewhere with a sketch and photo of the simple rig Grant built to use with his bench drill for punching rivets, which includes details of how the punch and die are made.

The tool design that both Grant and I use stretch forms the rivet head. The size of the hole in the die sets the dia. and the pip on the punch determines the height. I've found with polystyrene you need a separate punch for each thickness of polystyrene sheet. The thicker the sheet, the higher the pip needs to be to extrude enough plastic into the die to form the right shape rivet head.

The basic body parts of the steel open trucks shown in this thread are made from 0.040" sheet, door hinges are 0.030" and the rest of the rivetted strips are made from 0.020", so I needed three punches and one die. It's close to impossible to punch rivets into a narrow strip, so things like hinges and angles are riveted by putting several rows of rivets in a piece of sheet, then cutting out strips of the required width. If there is a need for punching rivets in thicker sheet than 0.040" (1mm) then it is probably better to punch them in thinner sheet and laminate to get the desired thickness.

As Philip said, polystyrene sheet can become brittle with age, especially if it is exposed to light. The white polystyrene I get here doesn't have much UV stabiliser in it, so starts to go yellow and brittle in a year or two if left exposed to light. I keep my large sheets sandwiched between sheets of ply in a dark part of the workshop and they are still flexible, although it's been over 5 yrs since I bought them.

tom_tom_go wrote: ↑
Mon Oct 29, 2018 9:15 am
Am I the only one who has realised from this post that you can stamp Plastikard to mimic rivets rather than adding them separately?!

I have been punching rivets in card and what I loosely refer to as 'tin' for about 30 years. It started when I was still doing OO9, and had decent eyesight. I don't use Plastikard much mainly because I tend to like making models out of wood, and stuff that I have scrounged out of the recycling bins.

Graeme - lovely wagons. Interesting to see how Australia practice developed, and is different to its UK parent.

Beutiful wagon, I love 'em! It's always a pleasure to see such attention to detail on "humble" wagons - I've always drawn the line at the ironwork inside wooden bodied wagons, but maybe I should re-think! Inspiring stuff, thanks for sharing the photos.