I like to make rough drawings before I start a project simply because messing around on paper is a lot cheaper than wasting plywood, but I am often quite economical even with the paper, and will put some basic ideas down which I then play around with. My Dad was the same with his hobby/profession restoring boats, so I guess I am a chip off the old block on this one.

The attached drawings contain four possible versions of the CLR's original carriages all based on NER electric/petrol-electric stock of 1903-1905. The basic design philosophy was 'mek it a foot narrower, lad, and fotty foot-ish.' 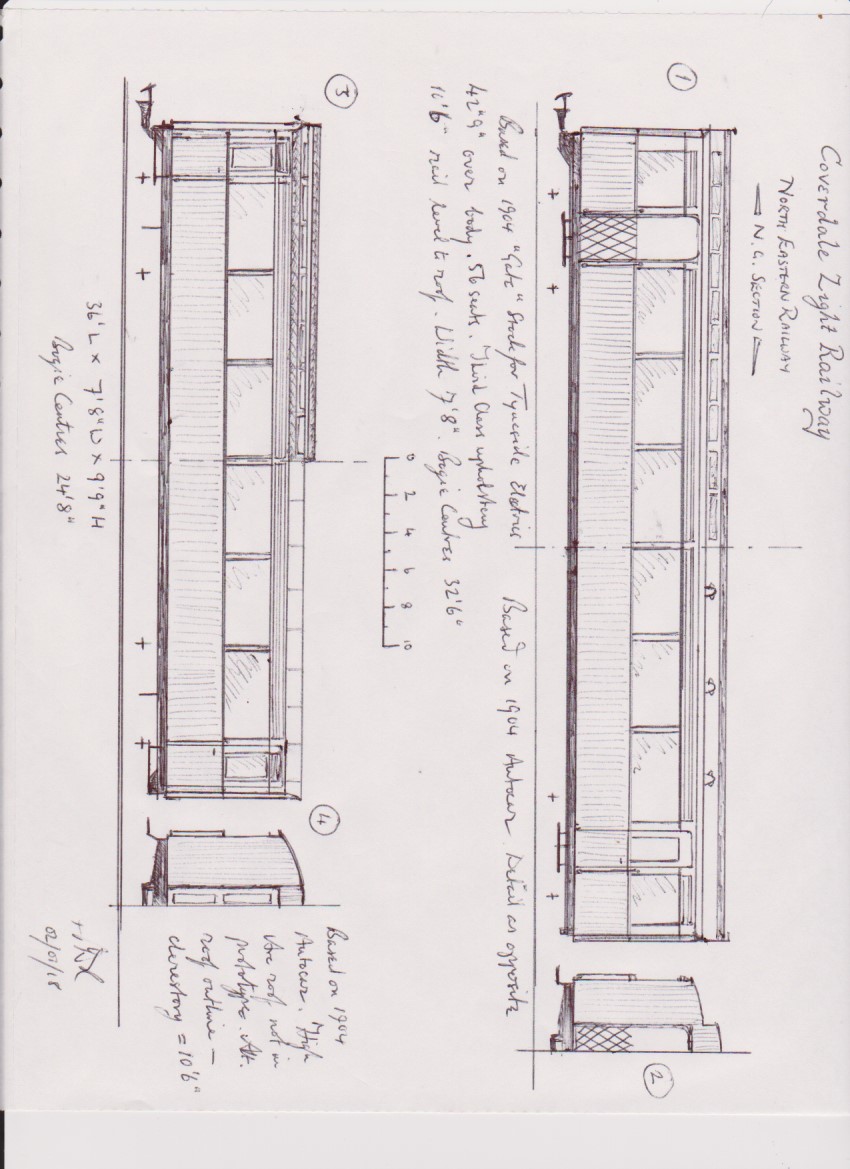 Apparently, the board's software thinks it witty and diverting to reorientate the landscape original image into portrait format

There are four designs variants:

1. Based on the original 1904 Tyneside electric stock with gates, but with a large vestibule pinched off the cab arrangements for the Autocar.
2. Closer to the 1904 Autocar design with proper doors
Both of these have clerestory roofs, which was NER practice at the time, and are designed for a 41'6" underframe. In both cases, designing a brake-composite version would be pretty straightforward, and would not entail a wholesale redesign of the coach body.
3. Again a mix of Tyneside electric and 3170/1 but with small vestibules. Clerestory roof.
4. Same again, but with a high arc roof, or just possibly, if I am feeling ambitious semi-elliptical roof, which would be more of a 1913-22 design feature, but is a heck of a lot easier than building a clerestory roof!
These would have been carried on a 35 foot underframe. (Looks a bit too GCR Barnum for the NER)
5. Not drawn out, but a seven window version of small vestibule end door version of the design to hold 56 passengers rather than 48. The 7 section design gives an easier gateway to a brake composite with one vestibule and two bays becoming a guard/baggage compartment, and two bays becoming a small first class saloon (10 or 12 seats) whilst the remaining three bays would provide 24 third class seats. This would be a useful vehicle for winter operations.

Cheers,
Peter in Va
Last edited by IrishPeter on Thu Jan 04, 2018 11:23 pm, edited 3 times in total.
Traffic Pattern? What pattern? Spuds out; grain in, but cattle, sheep and passengers are a lot less predictable.
Top

Roughly 24 hours left on the poll, and there is no clear favourite! Both 36' designs, and the 43' gate stock are tied at the moment. Anyone else care to weigh in?

Hi Peter
Just to confuse things - aesthetically, I prefer #2, but if I was doing the construction I would probaby go for #3 as it would be slightly easier to put together.

Rik - I did a high arc roof vehicle based on a WAGR suburban coach a while back. It had the entrances in the same relative positions, and the doors were not too bad to do. The problem was the weakness it introduces over the doors. In slam door stock that can be compensated for by the framing, but as I was building a coach with sliding doors I could not frame it the way I usually would. If had been thinking I could have used the gutter strip to stiffen the upper edge, but visually that might not have been satisfactory.

The NER Petrol-electrics did not have fully enclosed vestibules, but there was a cross partition on the outer sides of the doorway, but not on the inner side of the doorway. At one end it shielded the engine compartment, and at the other the driver's cab. I have not hunted down any good photos of the 1904 electric stock interiors yet, but assuming that the pics I have seen are 1904 stock not 1919 they seem to be similarly open. End vestibules and/or lavvies to the ends of the vehicle was generally preferred in wooden body on steel underframe days because of the risk of telescoping even in relatively low speed collisions. I am sure that Norwegian or Calthrop-Jones couplings would do something to mitigate that, but maybe not enough. BTW, even BR Mk. 1s could theoretically telescope as their steel bodies were relatively lightweight when compared to the frame, however, they were nowhere near as bad in that regard as the CIE Laminate stock, which had a steel or aluminium skinned wooden frame body.

The reason for preparing a 36' design as well as a 43' design is my experience with body mounted couplings, except that, because of the use of transporters on the CLR the couplings are low and therefore bogie mounted on the Newqidas. The tendency of body mounted couplers is to create unfortunate geometry on sharp bends leading to derailments. Experience suggests that weakening the centring springs helps, but generally I have stuck with a maximum vehicle length of 20" over the coupling faces on 4' radius curves to keep the drag problems down. Of course, going with bogie mounts we have just re-written the rule book on that point, but big vehicles on tight bends can be visually disagreeable.

Of course, building the original rolling stock brings up the question - do I include 1st class accommodation? The NER did have some third class only services, and they were usually short distance local runs such as the Filey and Pickering locals the Autocars used to work out of Scarborough. Any thoughts? On any railway that slowly dropped out of use the most likely vehicles to survive are things like brake-thirds, and brake-composites which remain useful even during the dying throws of passenger service. I sort of have visions of a Brake-third or a brake-compo lying around somewhere until the preservationists get to Coverdale.

Cheers,
Peter in VA
Traffic Pattern? What pattern? Spuds out; grain in, but cattle, sheep and passengers are a lot less predictable.
Top

I have spent the last couple of evenings preparing the working drawings for the wooden bodied stock. I have assumed, for the sake of argument, that these were pensioned off in 1954 when the line closed to passengers, and went for chicken sheds and holiday homes shortly thereafter. After scouring the countryside for miles around Geordie Mike and Cross-eyed Frank found a couple of them hiding in fields in various parts of the Dales. Negotiations ensured, and eventually two of them made it back to Middleham for rehabilitation. In the meantime, stock was imported from Germany, and Austria to get things rolling (literally) hence the German Reko stock, and it leaves me a plausible excuse for the CLR importing an Austrian four-wheeler if I get that whim.

Anyway, I ended up going for the 40' underframe design with end doors and seven sections, mainly because a 35' underframe was too short to produce a workable brake-compo. The 36 foot deign I sketched out ended up with 16T and 10F class seats, with a 10' section for luggage and the guard, which would have made it a bit too small to operate on its own. It also produces a vehicle similar in size to the Newqidas. Needless to say, I have drawn a brake-composite to go with it, and the BC will probably be built first. Coverdale trains tended to be short - loco, 1 to 3 transporters, and a coach or two, which is what will fit the designed length of the loops outside.

I am far enough on with the Saxon to start thinking about what comes next. As a result I spent half an hour or so redrawing the 36' composite brake last night, and came up with a version that would have 6F seats, and 18T with a 10' luggage section, which may be sufficient. I am thinking four carriages for the CLR - the Saxon; two thirds, and a composite brake - which construction project should keep me reasonably busy through 2019 when couple to producing the necessary goods stock, and actually building the railway! I'll see if I can get the missus to scan the result sometime and post it here.

Cheers,
Peter in VA
Traffic Pattern? What pattern? Spuds out; grain in, but cattle, sheep and passengers are a lot less predictable.
Top
Post Reply
9 posts • Page 1 of 1