Aaron,
The work you're doing is simply brilliant. Like many others, I've limited myself on batch building to single figures, but that's mostly kits of the Binnie/Phil Sharples variety. Doing the same scratch built in such quantity is either disciplined or masochism

I can't understand why you think the Inspector wouldn't have much to inspect on your railway. He's finally arrived at Mitch's - I'm sure he could squeeze in a quick visit whilst down under!
Phil

16/10/21
After a break to focus on other projects, the seven trucks that were waiting for wheels have now been caught up with the rest of the batch.
Slowly working through fitting the planks, though I've only enough bar clamps to do five trucks at a time. Using PVA, tacking with superglue where it won't be seen. 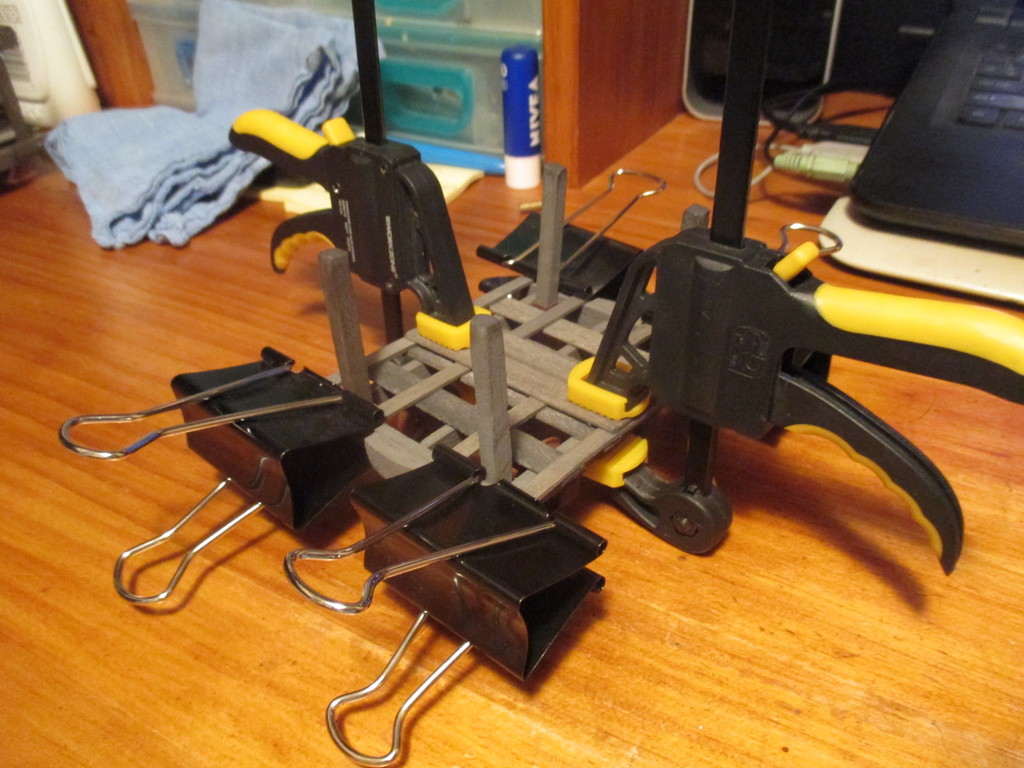 After allowing to dry at least 6 hours, the "coach bolt" locations are indented with a scribe, to allow an 0.8mm drill in the dremel, to locate quickly and accurately each time. Each truck needs 22 dressmaker's pins to complete from here, which get pre-cut to two lengths so they're ready for insertion. A tiny smear of shockproof superglue ensures they'll stay put. Approx. 950 pins were inserted through masking tape, into a sheet of styrofoam, for painting the heads. That will cover the planks, load winches and buffer plates for this batch.
A little paint is lost from the heads when gripping in pliers, but it's still easier to pre-paint and touch them up later, rather than fully priming and painting them in place. 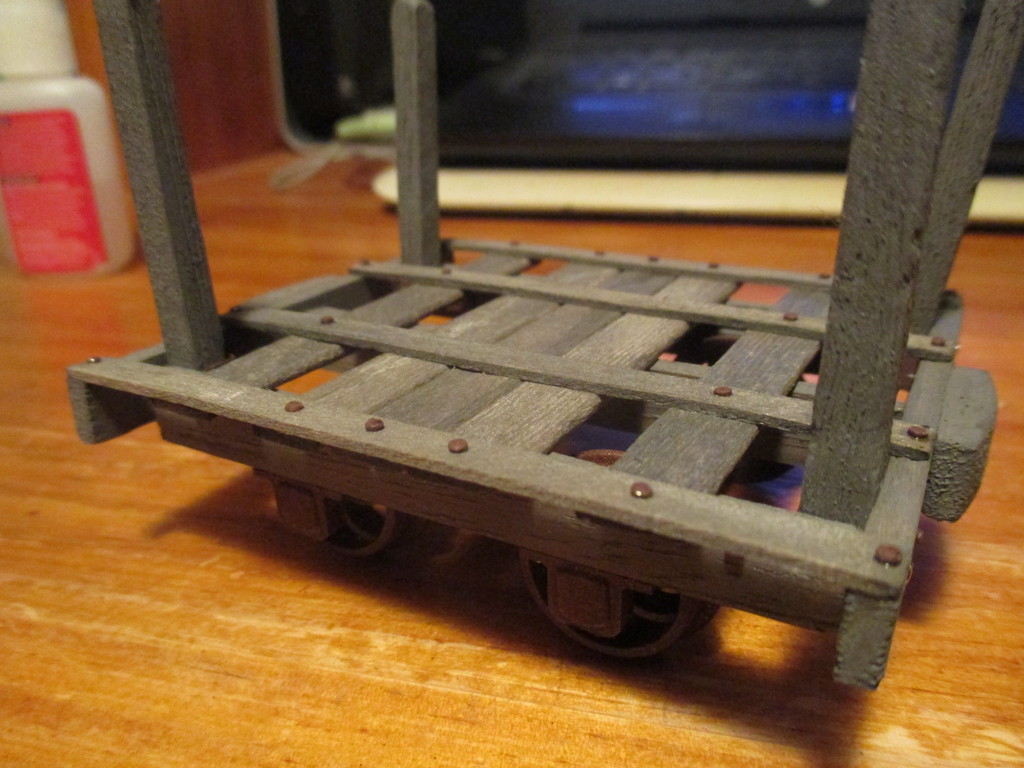 I've finally sat down and worked out what I'm doing for couplings, and how the load winches will go together. Parts for those are now on hand, I might make a start on them once the planks are all fitted..
Regards,
Aaron - Scum Class Works
Top

31/10/21
After a lot of thought, I realised the winches would have to be individually fabricated, which thankfully turned out to be less painful than expected. Finding the crucial component - the ratchet-and-pawl, was the hardest part. Ended up using these whitemetal castings from Ozark.

The first casting was bent by eye, to make a mounting bracket out of it. I decided I was happy with that one, and put a piece of masking tape on the pliers, as a positioning guide so I know how wide to make the bent bit at the bottom. Before bending them all however, the lower-most cast bolt detail had to be cut off and drilled 0.8mm for pinning to the wagon chassis - see left-to-right for progression of the castings.

Unsurprisingly couldn't find any suitable winch drums (capstans?), and was seriously looking at machining all 130 of them from aluminium or nylon. But I came to my senses, sparing my remaining sanity and elderly lathe, deciding to just fabricate them over a few evenings. 5mm styrene tube, cut with a razor saw and a simple jig of wood scraps. The washers were aligned by eye, glued with the shockproof cyano. 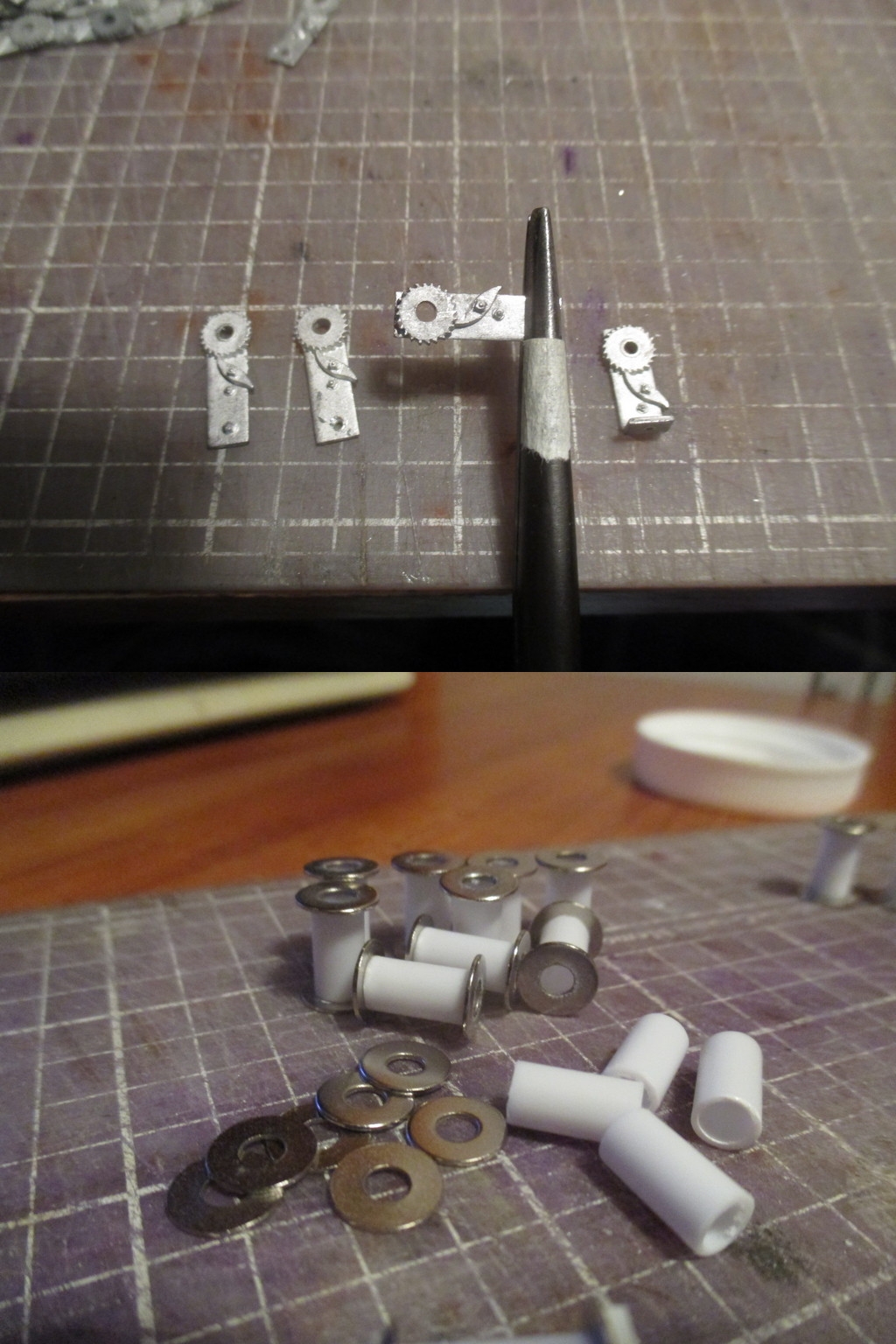 03/11/21
For the other side's bracket, I bought some styrene strip just for this - but realised it looked awful once assembled. So some scrap 0.5mm aluminium was cut, drilled and bent, to better represent something forged by the hundreds in a sugar mill's smithy. 1.6mm styrene rod was used as "spindles".
As all the whitetal brackets were hand-bent, I knew there would be some variation in height of the winches, so the spindle holes in the opposing brackets had to be drilled after assembly, to ensure they'd be roughly center-aligned to the winch drums. 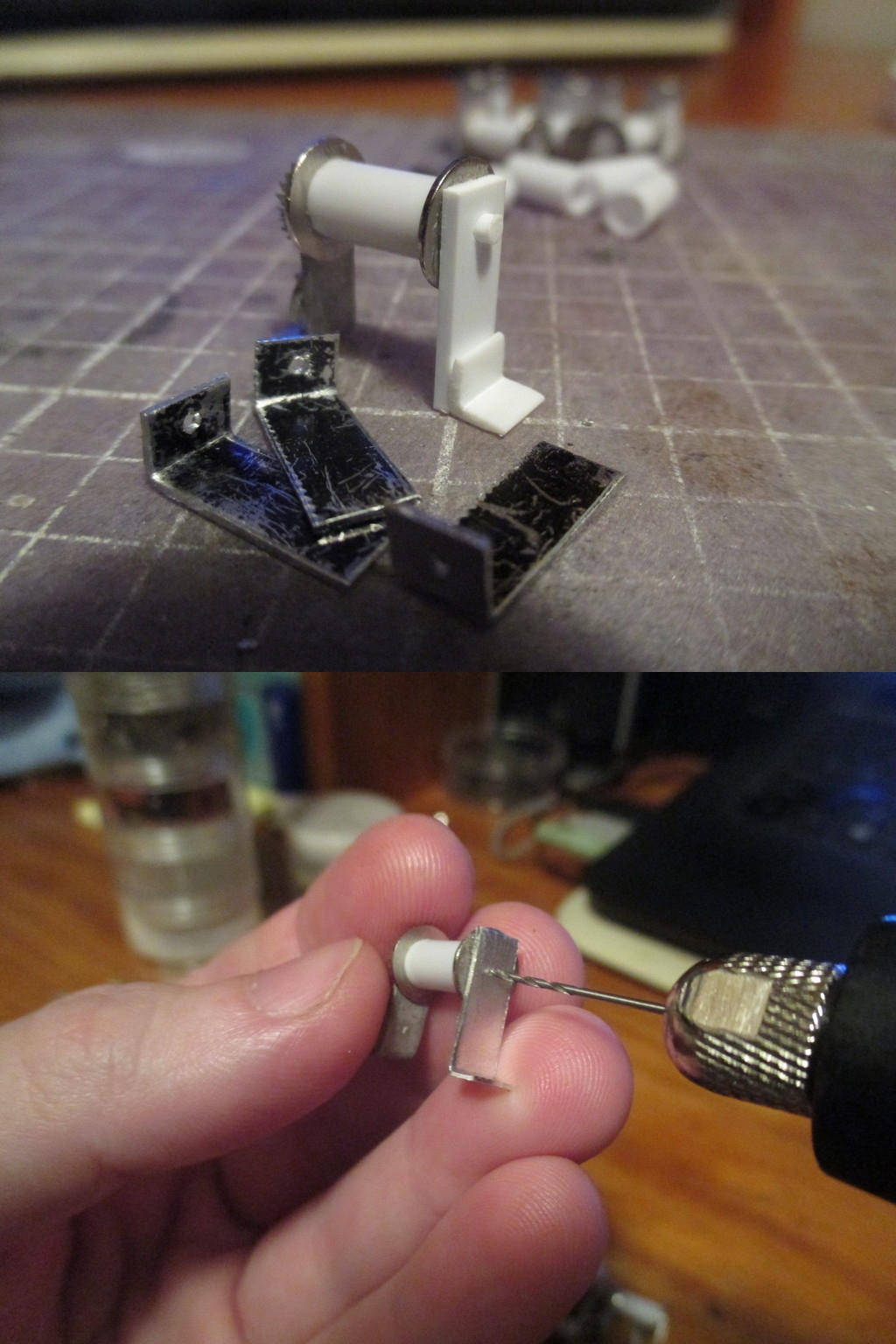 08/11/21
The couplings are the usual cut-down screw eyes, heated to red and quenched in used engine oil to blacken. Links of steel clock chain were used between closed eyes for the permanently-coupled trucks. After degreasing, they were pushed into the foam sheet as the sewing pins were, for painting. I know half the paint will wear off in fitting and use, but with the blackened underlying metal, I'm happy with that. 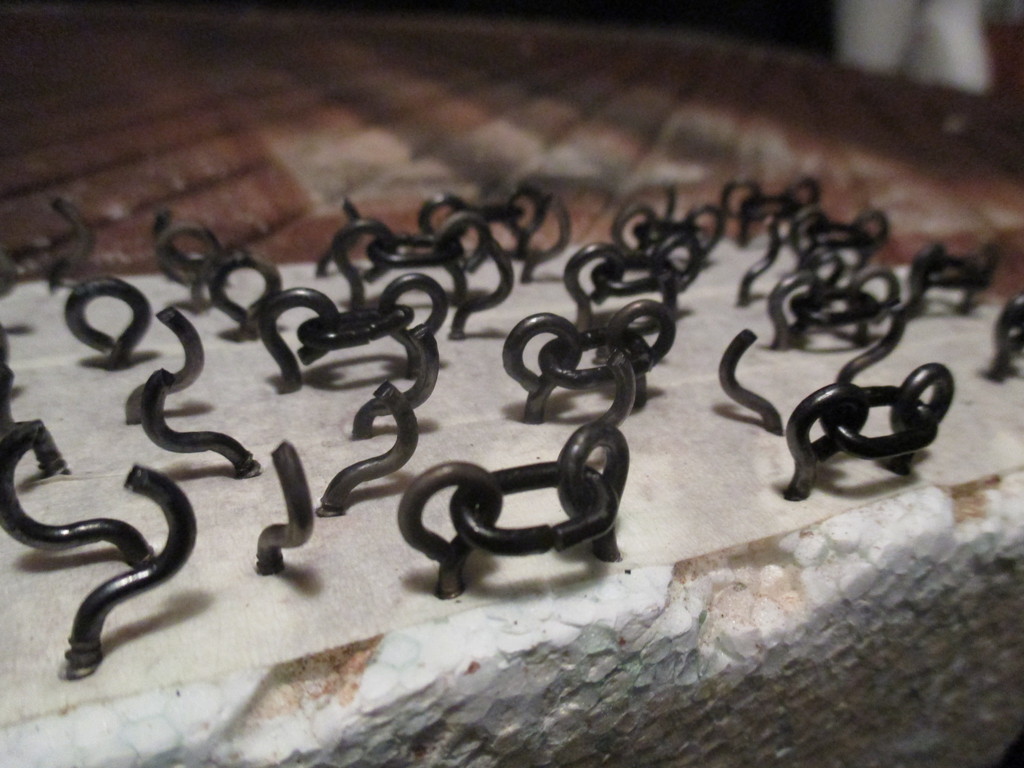 09/11/21
As trucks were often loaded in the fields at late/early hours, some mills painted the ends of their headstocks white, to make them more visible to tractor drivers and road traffic alike. After a number of failed attempts at achieving an acceptable peeling paint effect, I found simply dabbing a torn piece of makeup sponge onto the headstocks, gave a perfect appearance of grubby/worn paint. The failed attempts were just painted over with a brush, to represent new/repaired trucks. 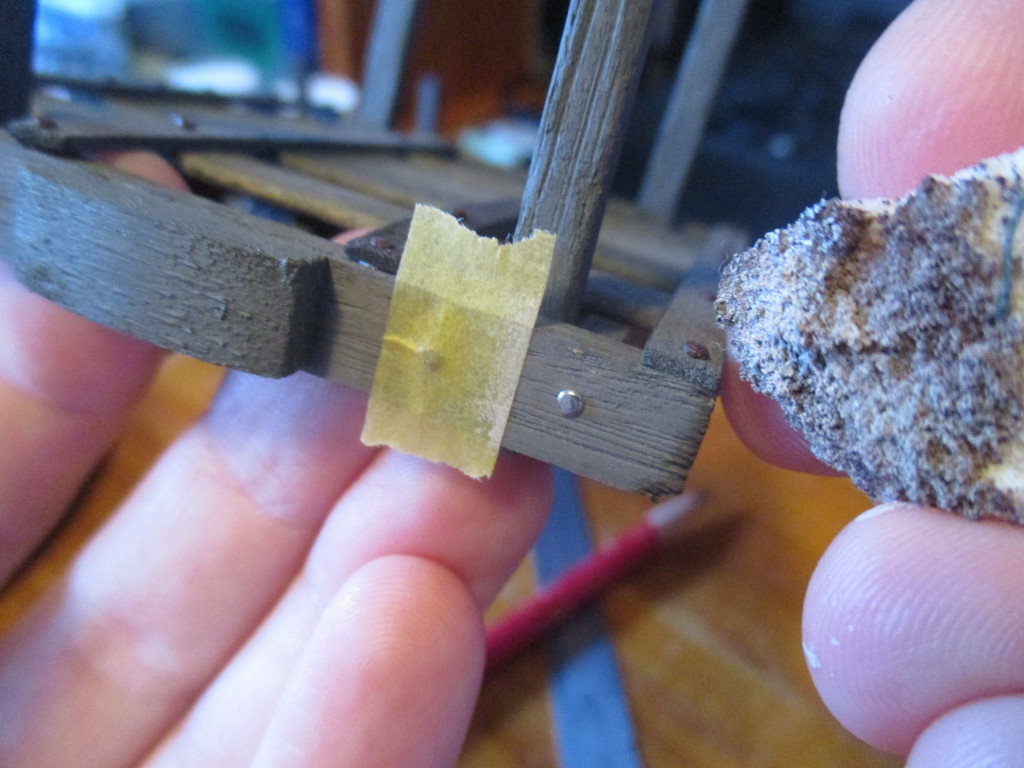 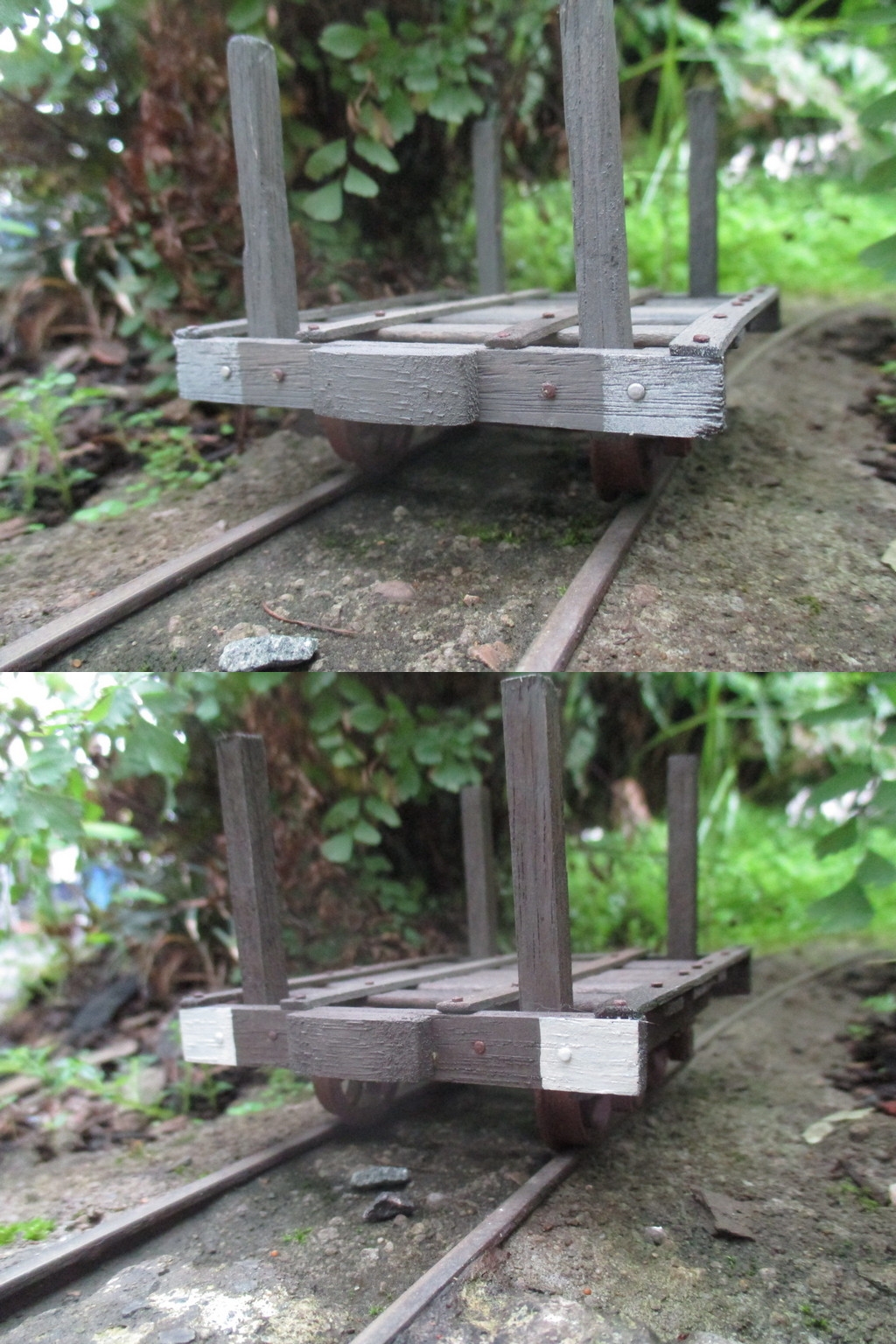 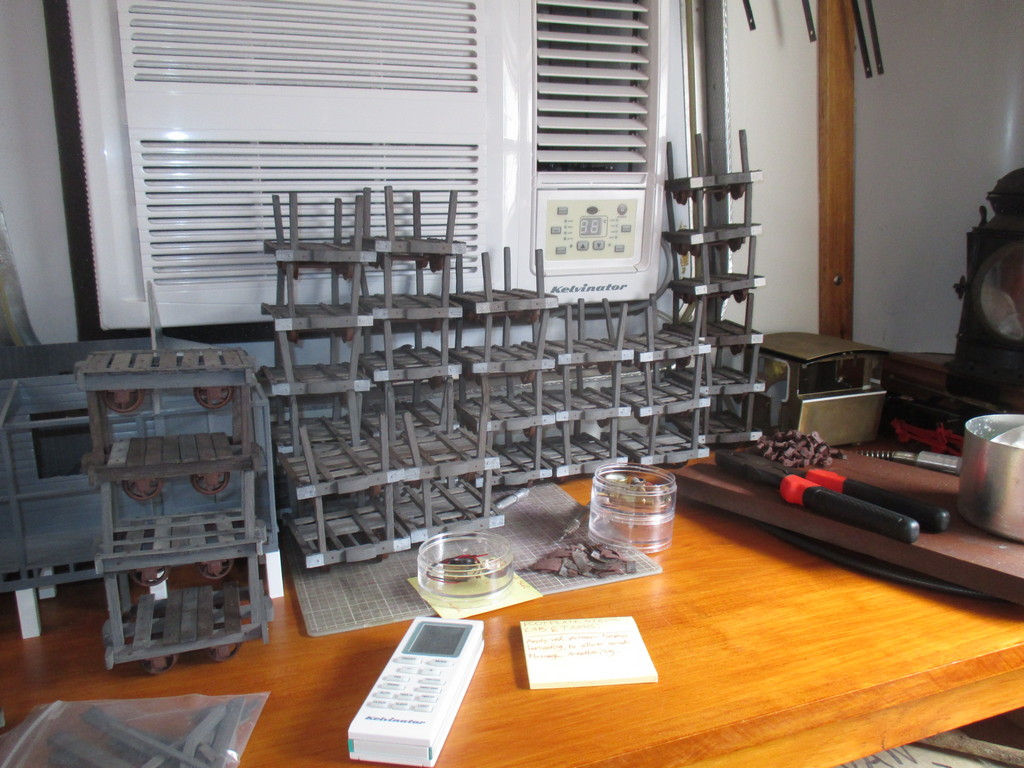 15/11/21
The winches and buffer plates were drilled after fitting with contact cement, tacked with superglue. I realised the permanently-linked eye hooks wouldn't be able to screw in with both wagons attached together, so they were separated for now. I'll re-couple them after numbering the headstocks and airbrush weathering. These winches aren't perfect by any means, but they're close enough. Every mill's trucks were different, but the winches always had the drum, ratchet and "spindle" (just nubs) cast as one piece. These were bought-in like the wheelsets and axleboxes, with the brackets made locally/onsite, along with the rest of the truck. 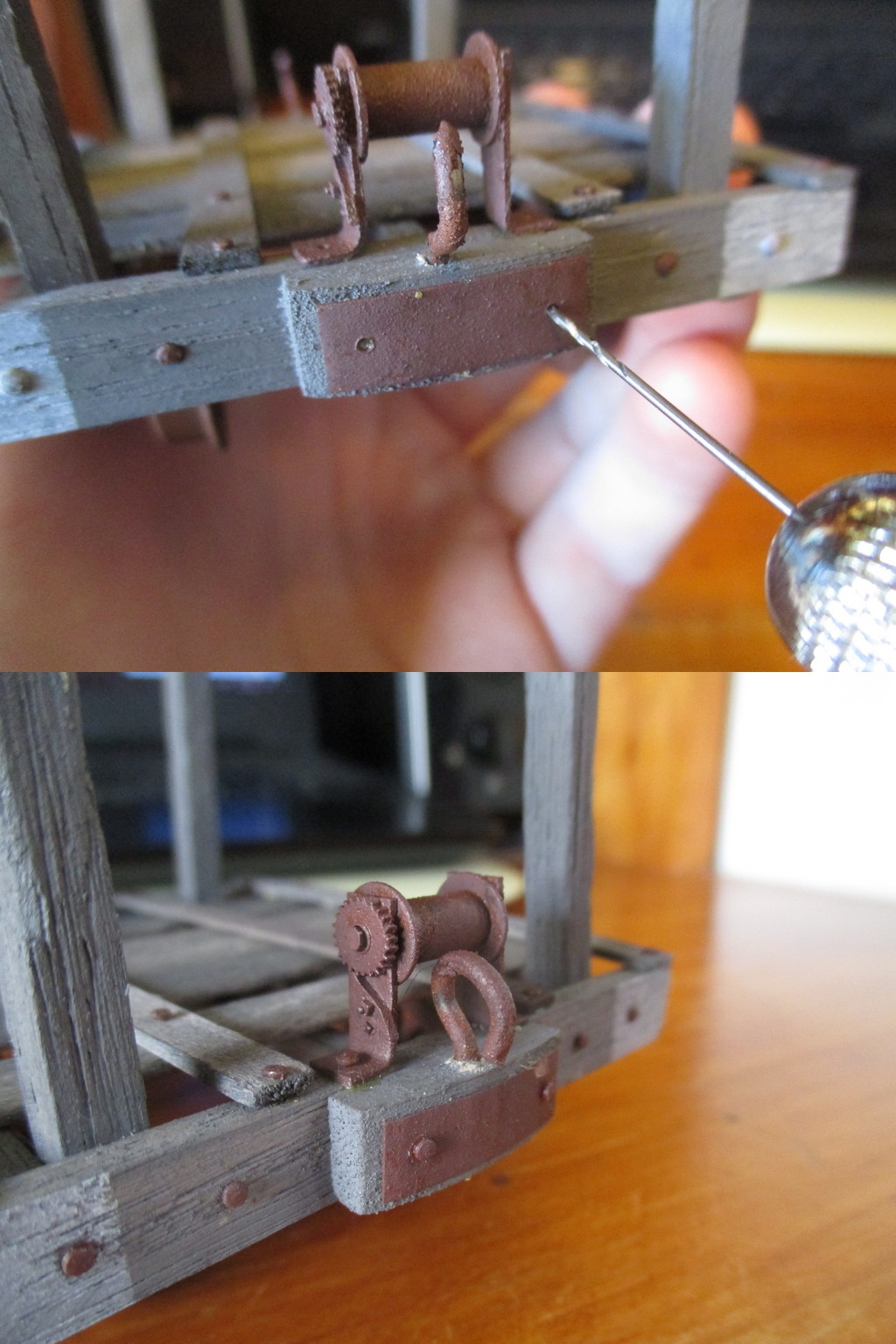 I flicked through the pictures before going back to actually read the words and I was in complete awe about how you'd scratch-built the rachet and pawl units, and that was going to be my first question! Nevertheless those trucks are simply works of art, not just models, and they keep getting better and better. Absolutely phenominal,
Philip
www.tinyurl.com/philip-trains
Top

Jawdroppingly brilliant! The detail you've included in those winches is really impressive, especially as each of them has been scratchbuilt from oddments. And the rust effect really finishes them off!

Most impresive Aaron, you have succeeded in making mundane items stand out and show their individual importance. Wonderful work.
The best things in life are free.... so why am I doing this?
Top

Peter Butler wrote: ↑
Tue Nov 16, 2021 10:51 am
you have succeeded in making mundane items stand out and show their individual importance.