Andrew wrote: ↑
Tue Jul 20, 2021 3:50 pm
Thanks Phil, glad you enjoyed it! If you want a truly daunting thread of "War and Peace" proportions (and brilliant modelling, of course..), have a look at Peter's "Time to build a Railway" one...

A little mutual admiration goes a long way, so thank you Andrew for your kind comments. Although I haven't been very active on the Forum recently I still read every post, so keep up your great work for us all to enjoy.
The best things in life are free.... so why am I doing this?
Top

I suppose I had better start my own thread?

Keep up the brilliant work!
Phil.P

Sounds like you're heading that way, Phil - especially if you end up with a dual gauge system

I fear I may end up with several lengths of track, in differing gauges?

I have a few hundreds of feet of 'G45' track of various makes and vintage..

Five three-foot? Lengths of 32mm standard-gauge (0) track. - Hardly enough to test a loco, but will have to do..

No Sm32, and not enough knowledge about track geometry, and curve radii, in this gauge/scale. - I doubt even the largest radius would be coped with by an 0 gauge mainline loco?

But I /we must not drift this thread any further..

Someone please get us back on track! 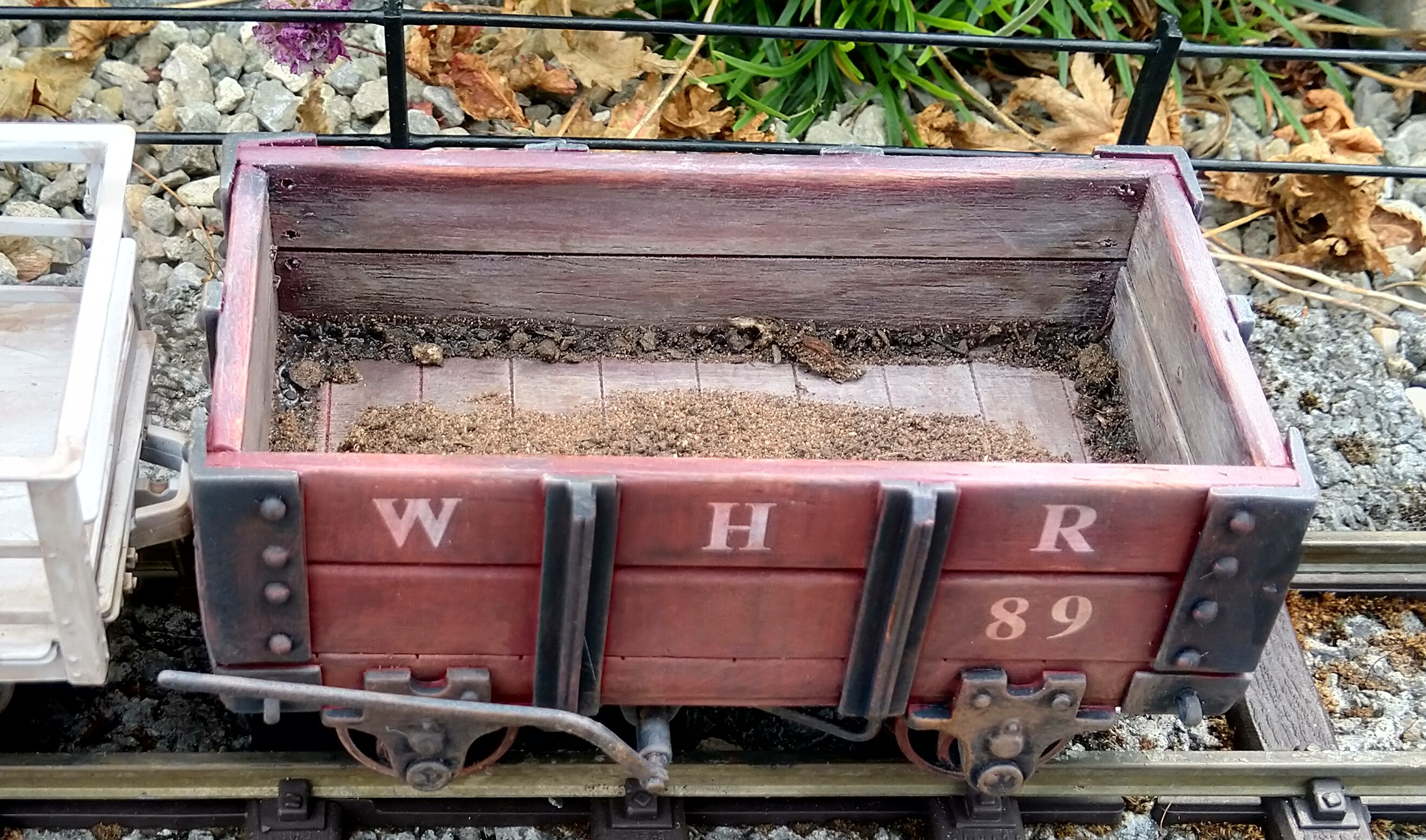 The two planked wagon is now finished, with some soil (inspired by Andrew's). 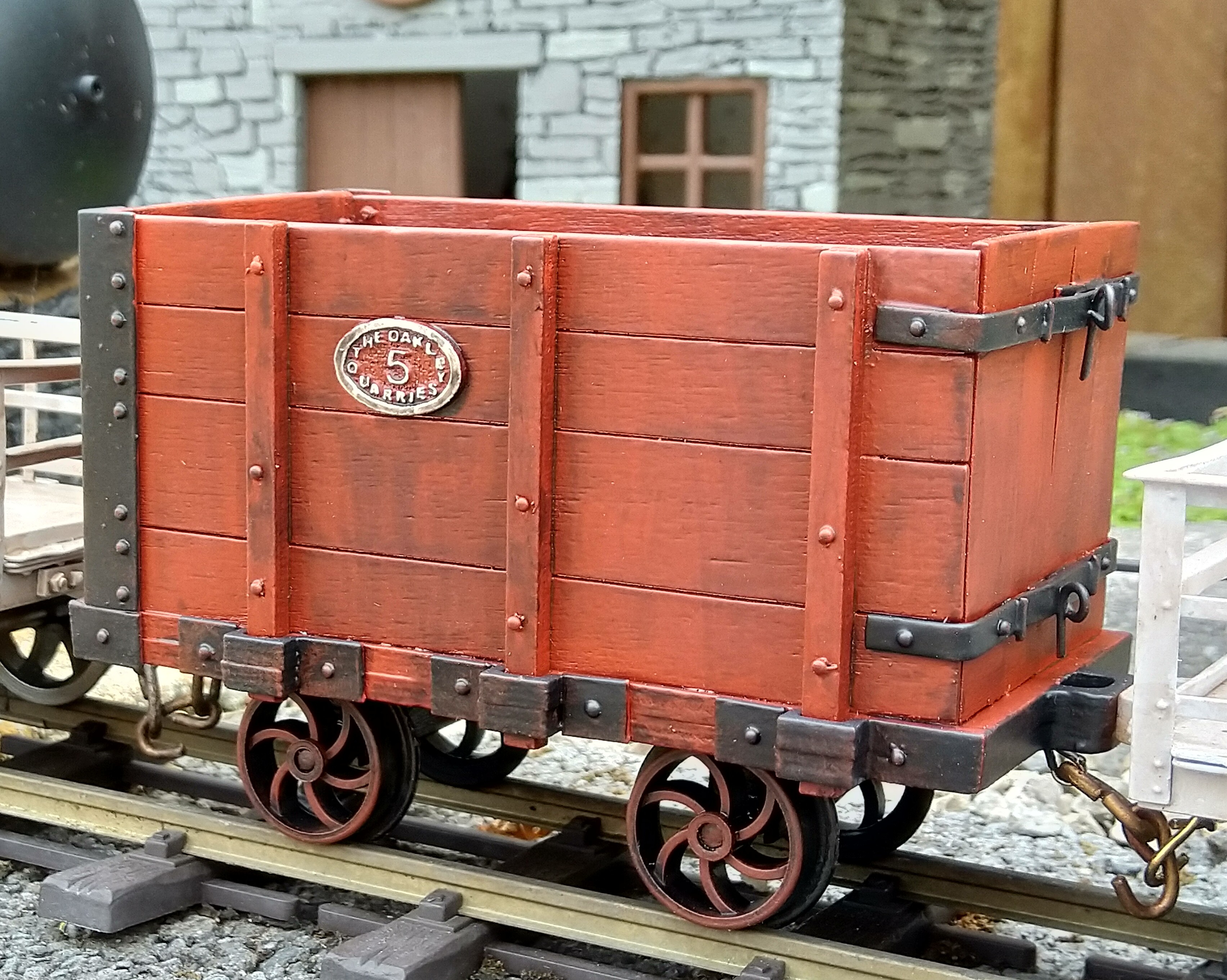 An FR private owners wagon, plated as Oakeley's. This is a cut-down Lineside Hut wagon with a scratch built "inside frame".
Last edited by JMORG on Sun Jul 25, 2021 2:09 pm, edited 1 time in total.
Limitations only exist if you let them.
Top 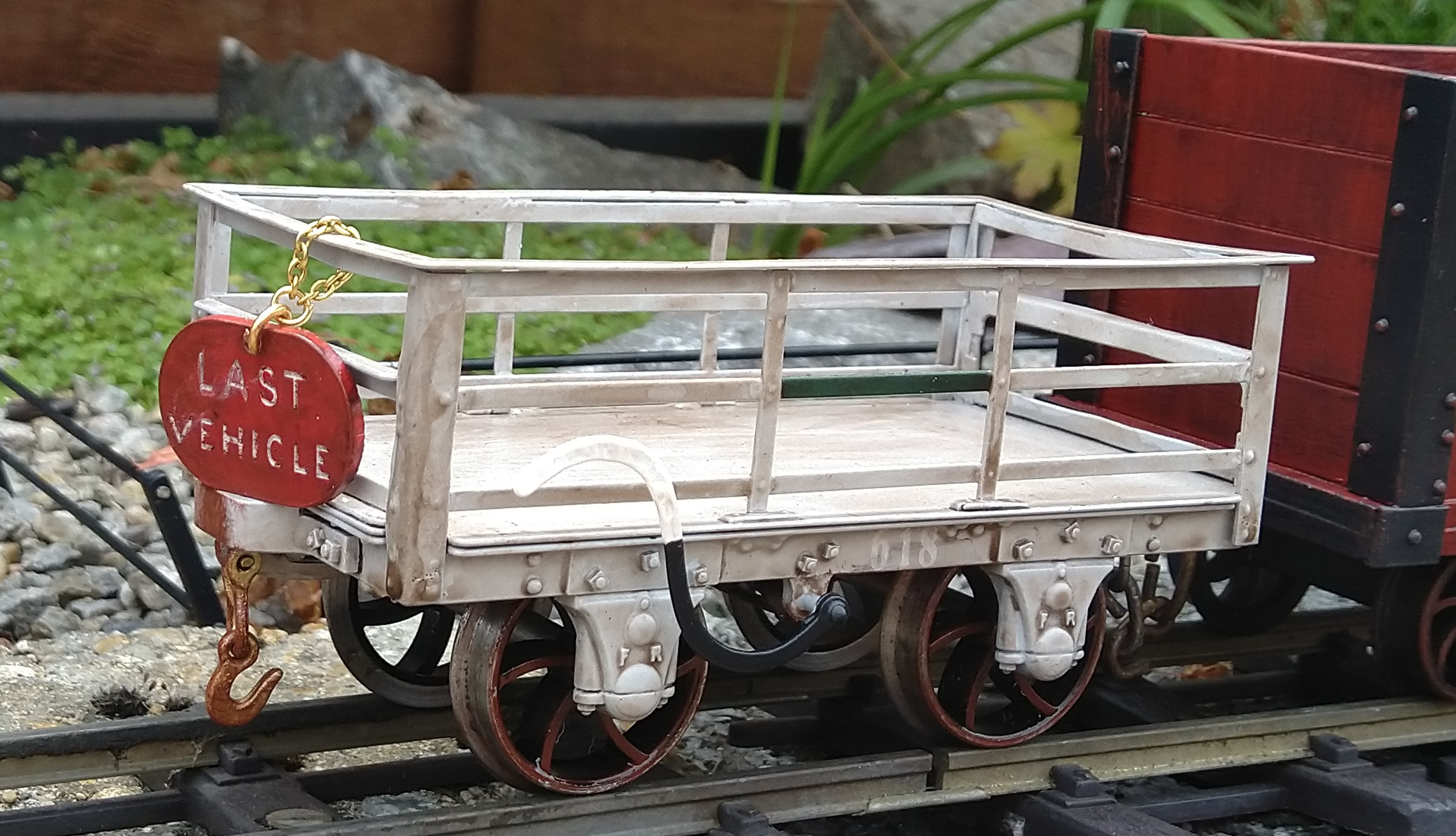 Limitations only exist if you let them.
Top

And finally, something a bit more "modern WHR". 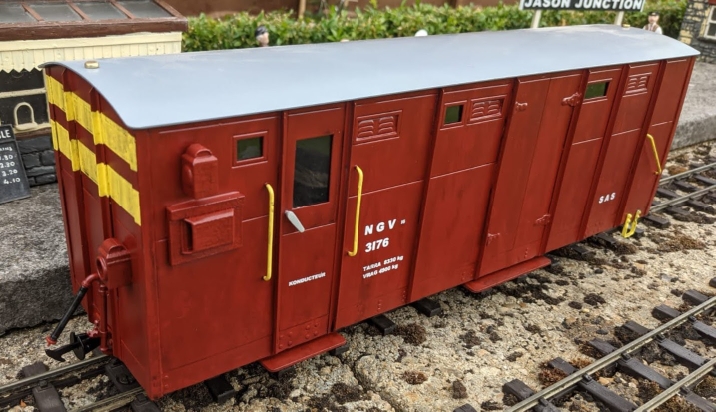 This enormous brake van was a Worsley brass "scratch-aid" kit, you get the side to make a basic 2D box and everything else is added to that. Features HGLW SAR bogies and scratch-built lamps + duckets.
Limitations only exist if you let them.
Top

Very nice collection of vehicles and beautifully finished too.
The best things in life are free.... so why am I doing this?
Top

I don't like them, I really love them...brilliantly weathered and the brake van is superb.
Rod

Yes, very nice indeed! I particularly like the interior of the open wagon...

It's been too hot/wet lately for getting much done in the garden, so I returned to the second batch of Big Big Train tippers I started work on a while ago to add to the existing train of five. This batch were coated with iron filings as before, but this time I used copper sulphate solution as suggested on the Forum. The results were startlingly different from previous efforts using vinegar, plenty of instant orange rust.

Unfortunately, because I (spray) painted the wagons in the crazy heat of the weekend before last, the filings didn't stick as well as they might because the paint dried so quickly. I've done my best to make up the deficiencies with paint, but this is definitely a learning process.

About half an hour ago I took the finished wagons into the garden for a photo session: 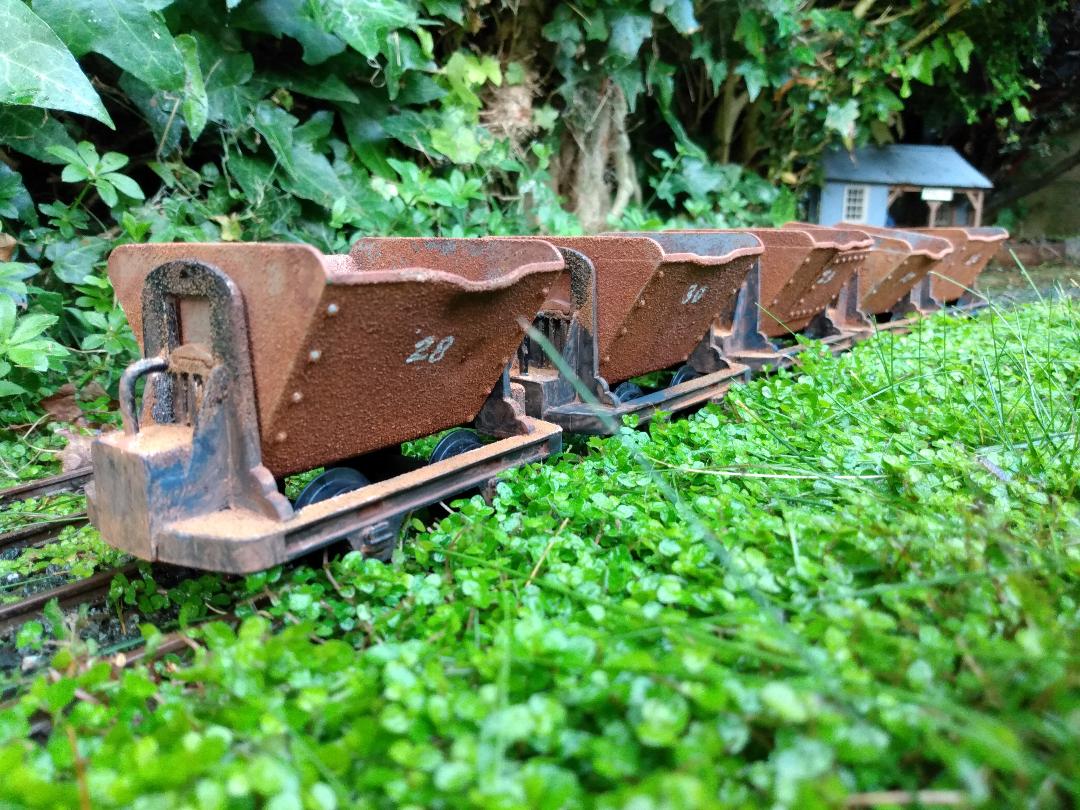 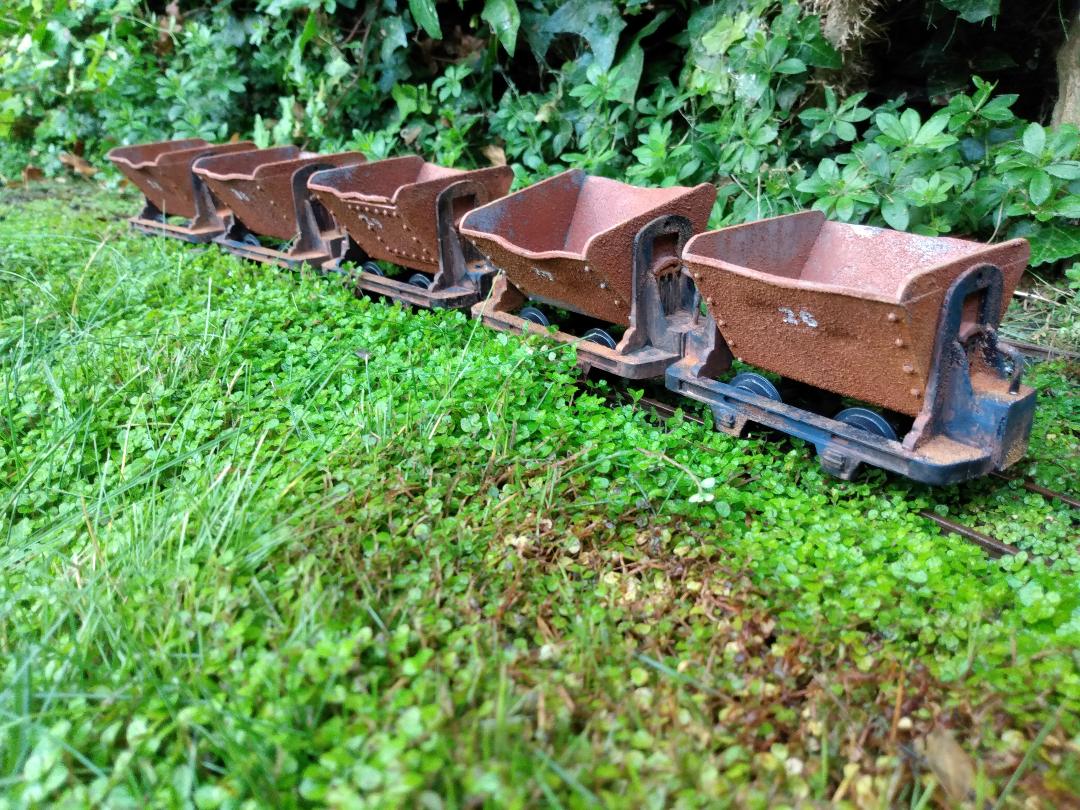 In case anyone was wondering, the numbers relate to the West Kent Light Railway, the freelance forerunner of the (Windmill Hill) Welsh Highland, which I revive every now and then for non-WHR flights of fancy such as these tippers.

Seeing the rake sitting in the garden inspired me to dig out the other five and a loco with the intention of making a short film but, as soon as I'd assembled the train, the heavens opened, the heaviest rain I've seen for yonks. I scrambled indoors with the loco, but all ten wagons are now sitting out in the rain. Last time I looked they were nearly full of water! I'm sure they'll survive...


I'm sure they will but you'll need to dry them well to stop them going rusty.....
Philip
www.tinyurl.com/philip-trains
Top


I'm sure they will but you'll need to dry them well to stop them going rusty..... 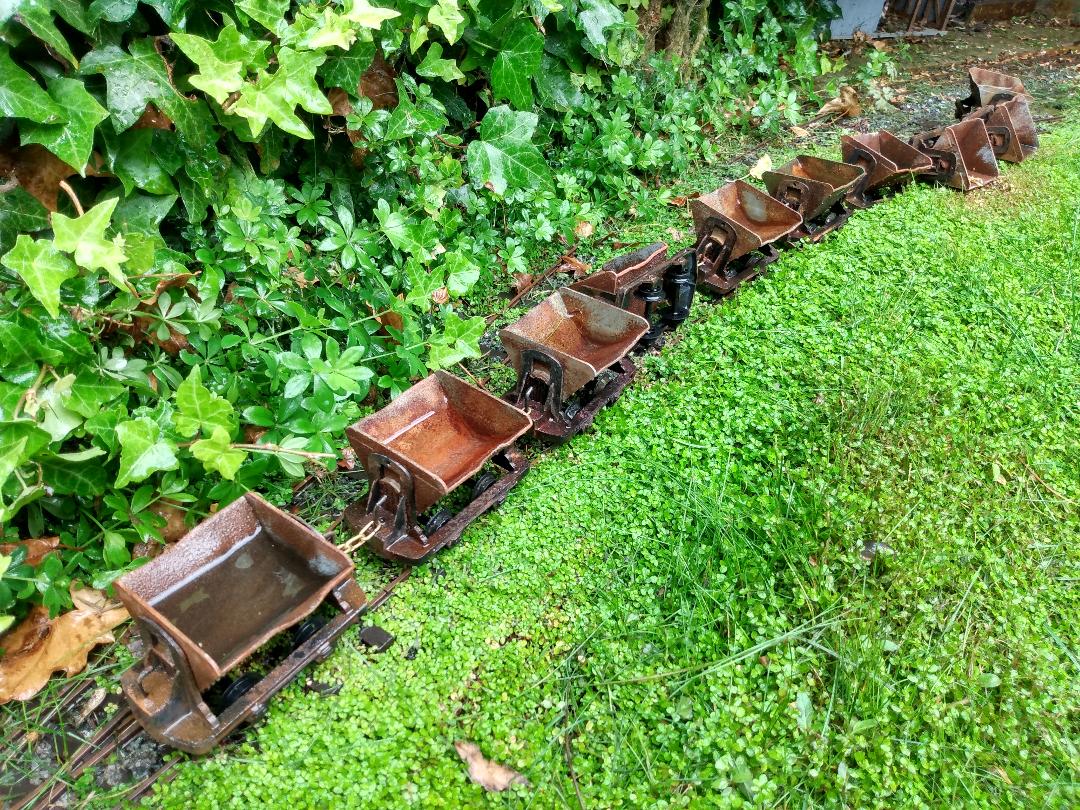 It's a VERY long train now though...

With thanks to Bertie B for the idea of playing with GIFs...