An online International community modelling outdoor and or garden railways where all scales and gauges are welcome. This forum is funded entirely through voluntary contributions by its members. Many thanks to all those whose funding keeps it going.

So cracking back on with the wagons, and whilst the other half takes the little one to see his nanny. I took the opportunity to create some bits for the van rake. Thew pasts so far have just been pieces of Balsa, plasticard and triangular plastic strip along with rivets from Cambrian models. 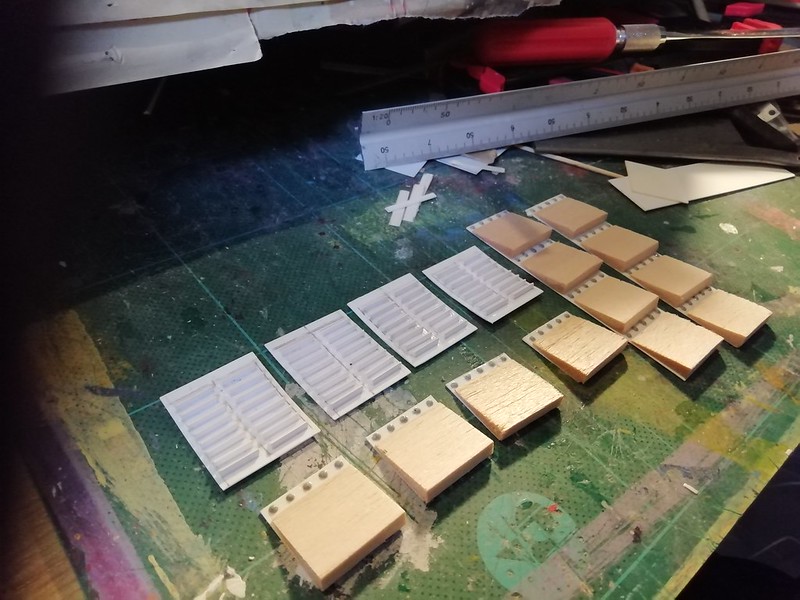 As mentioned previously I'm turning one into meant van. 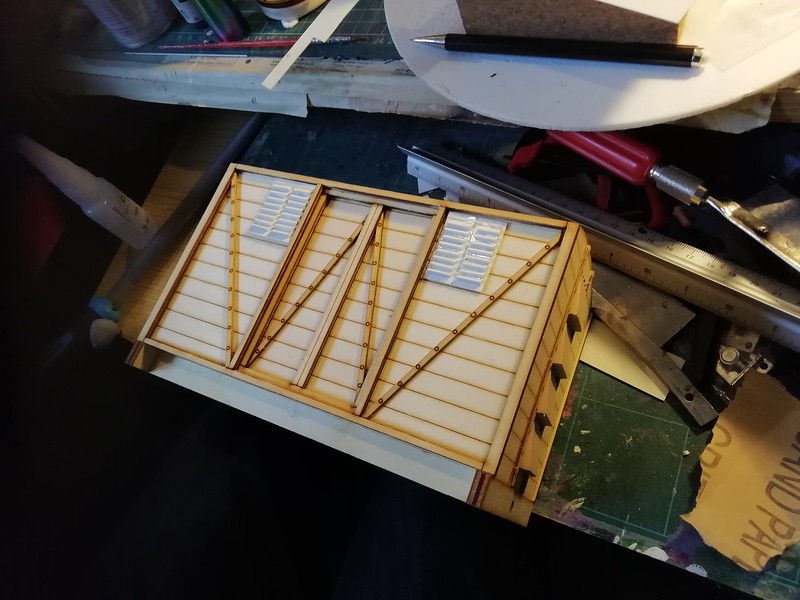 The basis of this is the BR 12T version as this has more overt detail differences.

I've also built up some vents for the generic vent vans again - based on the BR 12t types. 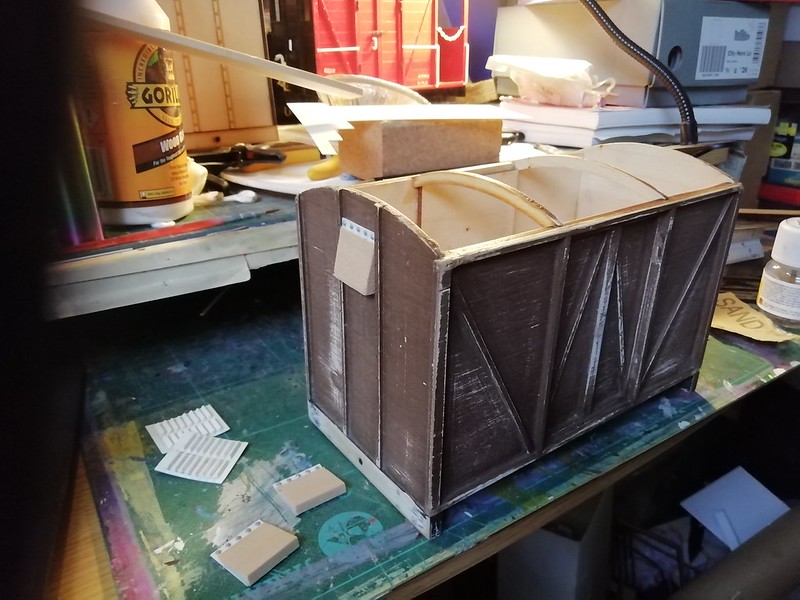 One atonal thing to make those who are not familiar with IP kits is sometime they include spacing lines to have identify where the sola bars go and others do not. I've found for 45mm gauge stock create two line 60mm apart should suffice, the three line going across the width are to help show where the wheels are going. For these models I'm going to have a 50mm wheelbase. 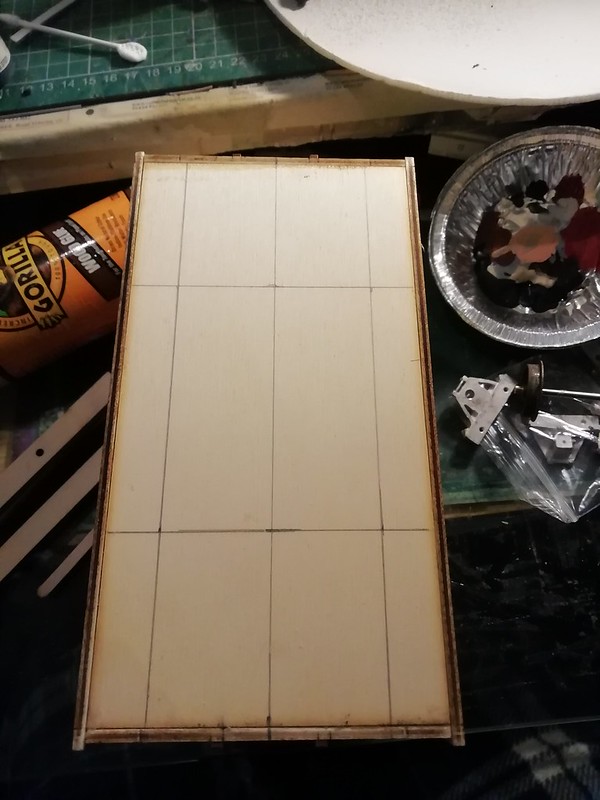 I also managed to make the vents for the fruit van. 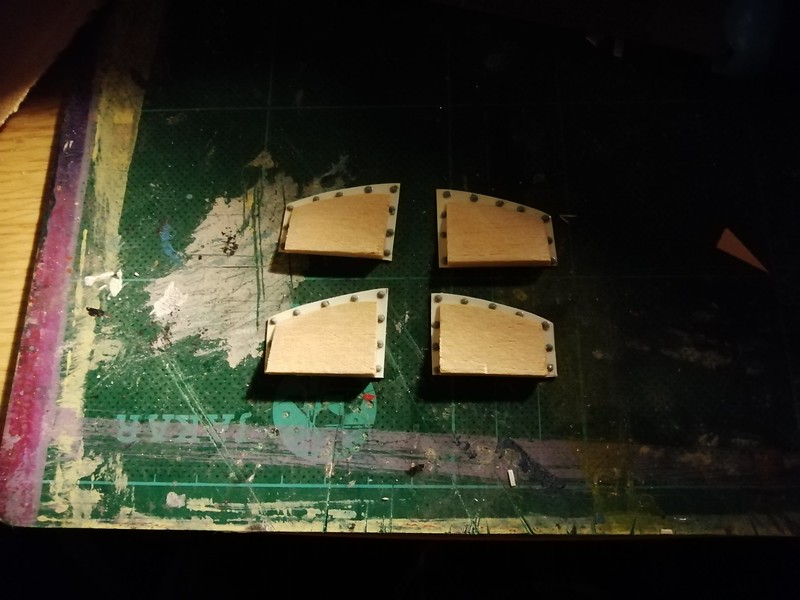 I'm basing this on the GWR type so it requires double vents at the top and either side of the ends. 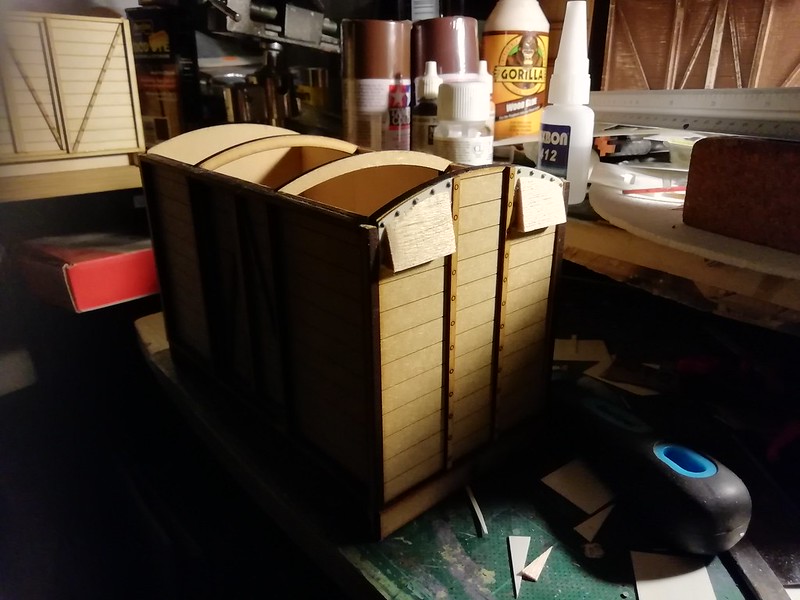 The basal wood vents and plastic surround were cut and sanded down to profile, along with the complimentary Cambrian rivets.
Facebook - https://www.facebook.com/Area51Models/
Instagram - https://www.instagram.com/area51greumach/
Top

I really like the details you're adding to each van - vents etc. They really bring them to life!

This is great stuff and shows what a difference a little detailing can do.
The best things in life are free.... so why am I doing this?
Top

I'm hoping it all pulls off in the end. Still a way to go but most of the body fittings have been completed.

I've managed to get the main bits for the refrigerator wagon sorted. 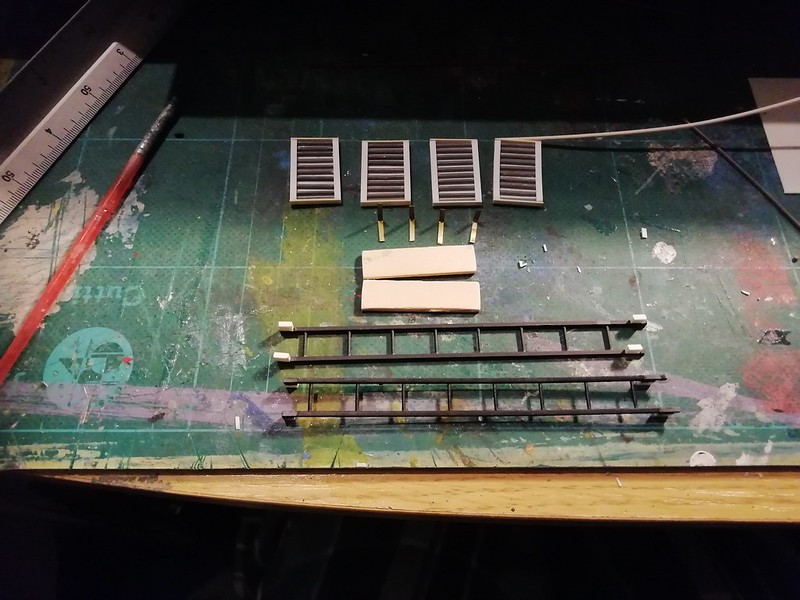 This is loosely base don the LNER refrigerator van and will be painted accordingly. The vents unlike the real thing stand proud as it just seemed easier to do this way. The ladders are repurposed from the signals I built a while back (I'll be eventually returning to them). 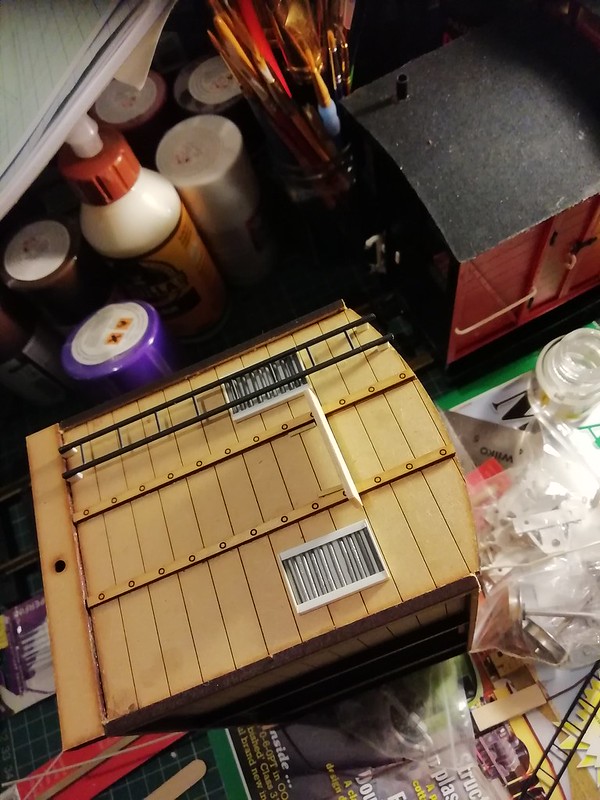 The fittings have just been place don loosely so this definitely will not be the final positioning,

In other news, the brake van was tried out yesterday and much to my surprised it performed admirably. The floating wheels kept contact on the track work which had suffered the ravagers of white and rain. The loco and wagons, however didn't seem to be enjoying the rough and ready track. 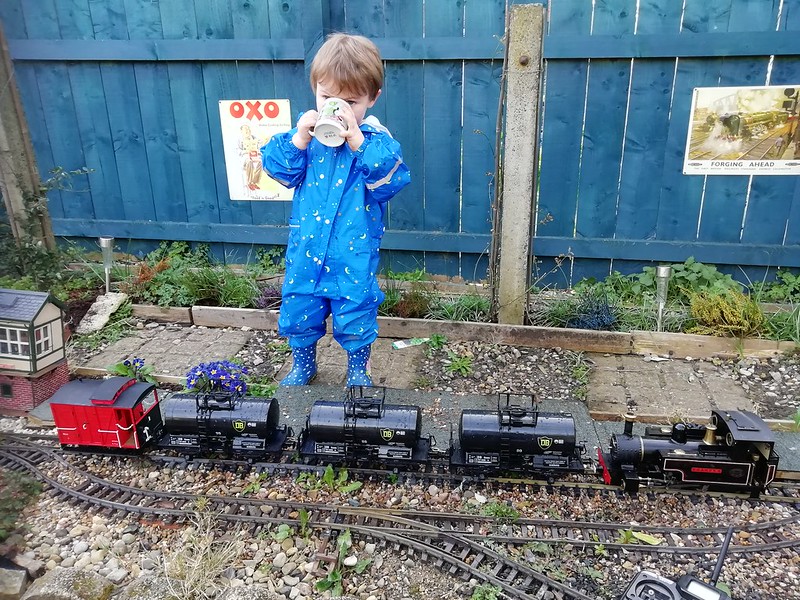 Yet again the apprentice wheel tapper was more than happy to lend a hand - once he finished. his brew.
Facebook - https://www.facebook.com/Area51Models/
Instagram - https://www.instagram.com/area51greumach/
Top

Despite having a lovely four day holiday away from work it's been jam packed now that we're allowed to visit some friends and family members outside. However, I managed to cram some modelling in tonight.

So far, and thanks to an anonymous benefactor I've began plans to extend the line somewhat over a vegetable patch which was put in a place where vegetables struggled to grow and increase the run round loop as well. As a result I'm going to be modifying all my coal wagons and add one or two more when time and money allow.

I've removed coal from four of them now and did as much sanding back as I could. Most of them will just receive penciled in planking but one or two sustained some damaged on the floor which pay require a new floor which I plan to add using some thin plywood. They need some paint work touching up and the blue wagon got a real hammering from try sand and grit on the workbench so I'm going to repaint it completely. It is one of my favourite wagons and it is with a heavy heart but I'm planning to buy some Brandbright 5 plank wagons which will receive this livery. 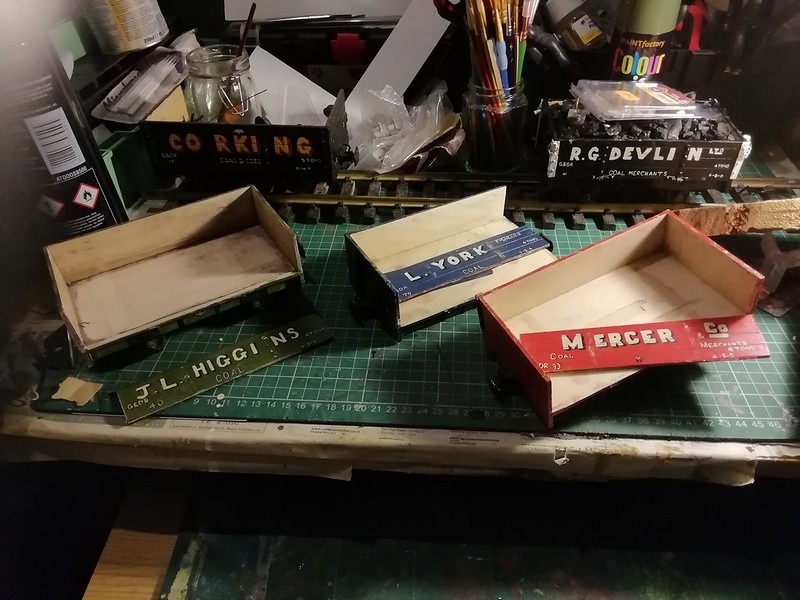 I've also managed to make some of the vents for the fruit van. I'm loosely basing this on the GWR/BR type van. There were deceptively difficult but I managed to get there in the end. 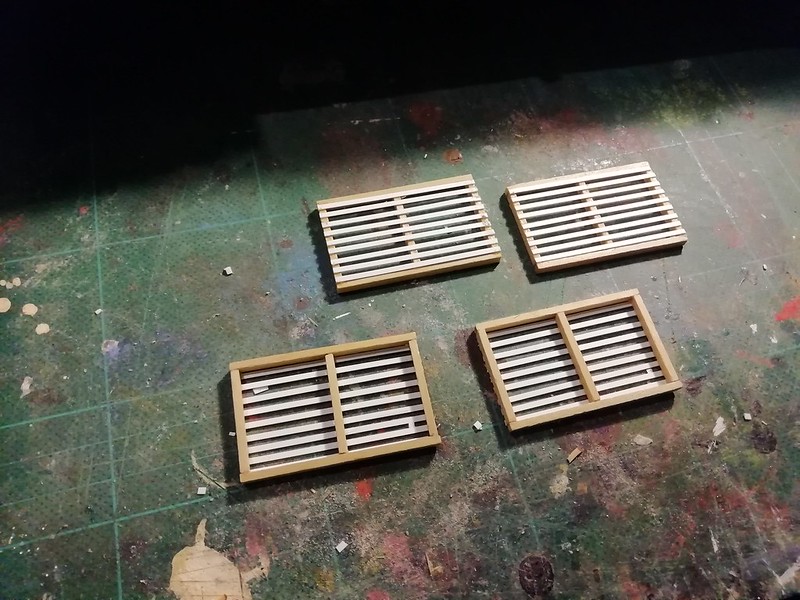 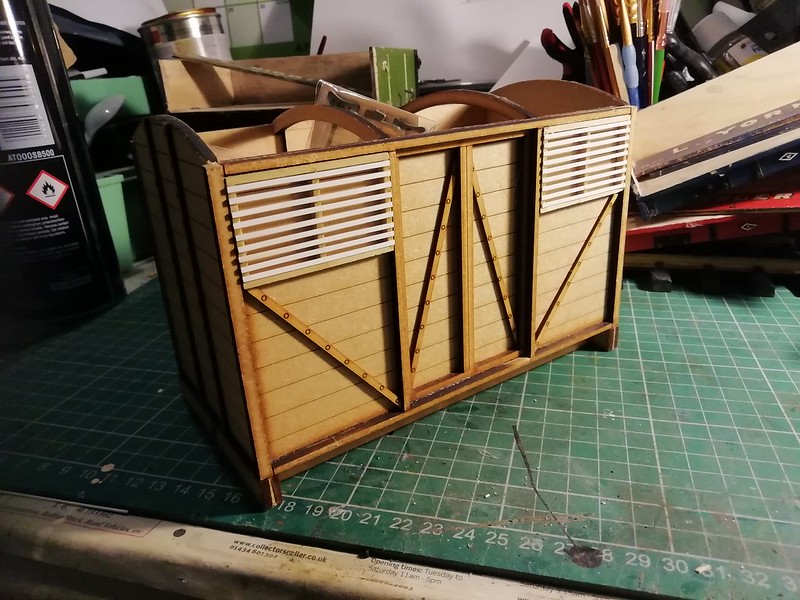 I think that most of the individual body work to do for this wagons. everything else can be done in batches. As previously mentioned a planned extension of the line will mean I can potentially add more wagons to trains so watch this space for more varieties of these wagons.
Facebook - https://www.facebook.com/Area51Models/
Instagram - https://www.instagram.com/area51greumach/
Top

I really do like the way you think things out and apply them to your wagons. Some brilliant modelling and creativity.

Shows what you can do with very little money spent I presume.
Rod

Very true, these wagons are fairly cheap and reasonably to built. They're also very simple kits which allow themselves to be upgraded and modified quite easily and cheaply.
Facebook - https://www.facebook.com/Area51Models/
Instagram - https://www.instagram.com/area51greumach/
Top

They look promising. The vents look superb! As you suggest, I bet they were really fiddly to make.