The current pet project of mine is to build some rolling stock (and motive power) to run on the Gauge 1 layout at the local model engineering society. While some will have noticed they're also being made available though Bowaters Models, at first anything made will be because I want one hence appearing in here! You can also tell this was a personal project because the first 12 models don't feature any rivets at all (personal preference)! But still, they run well and look the part so here they are! The first models cover Southern Pregrouping designs while the second lot will feature models from God's Wonderful Railway, 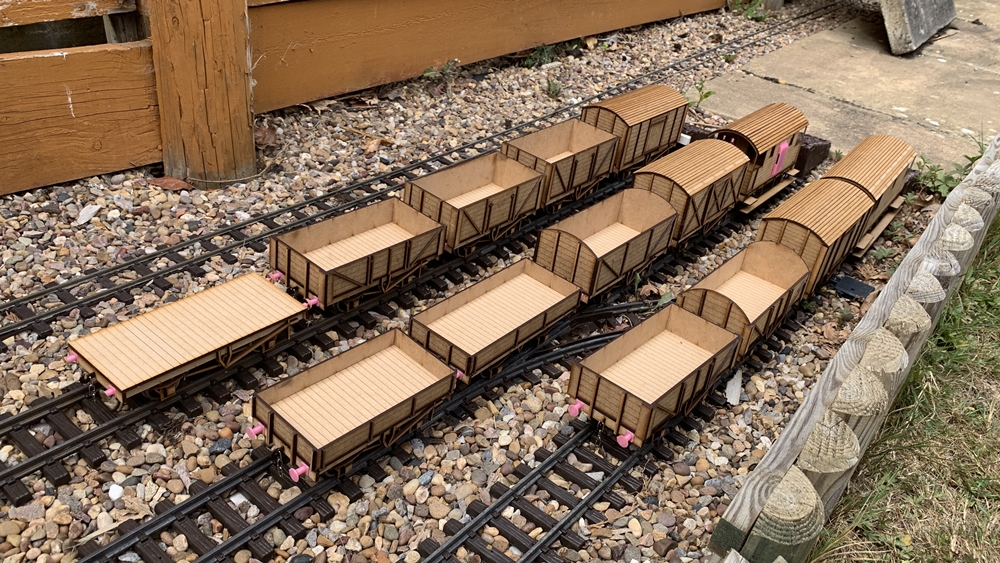 All the wagons on the test track sat in one siding per prototype railway company. 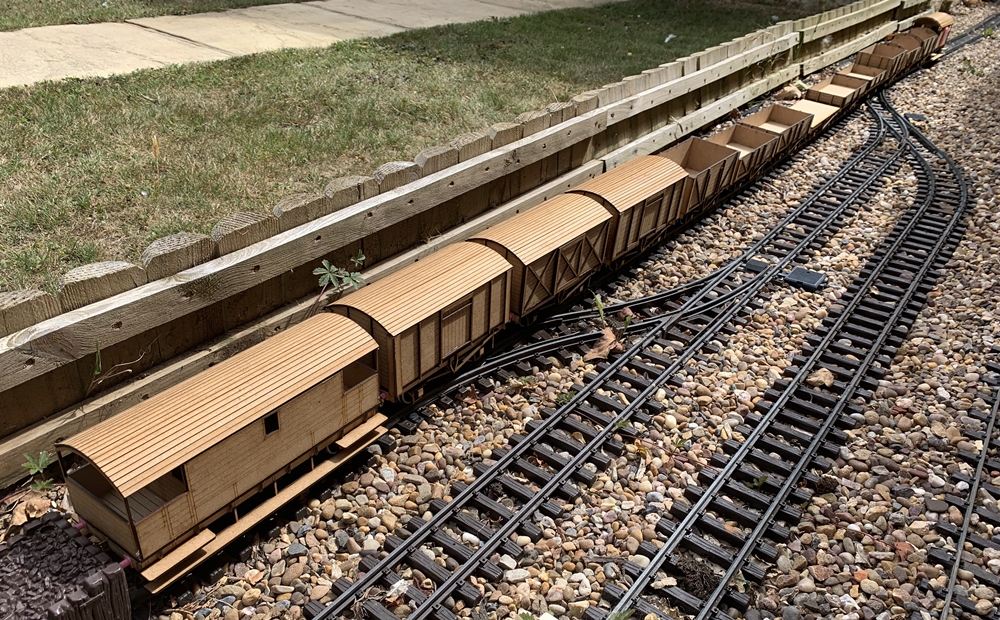 The entire train as it stands currently. 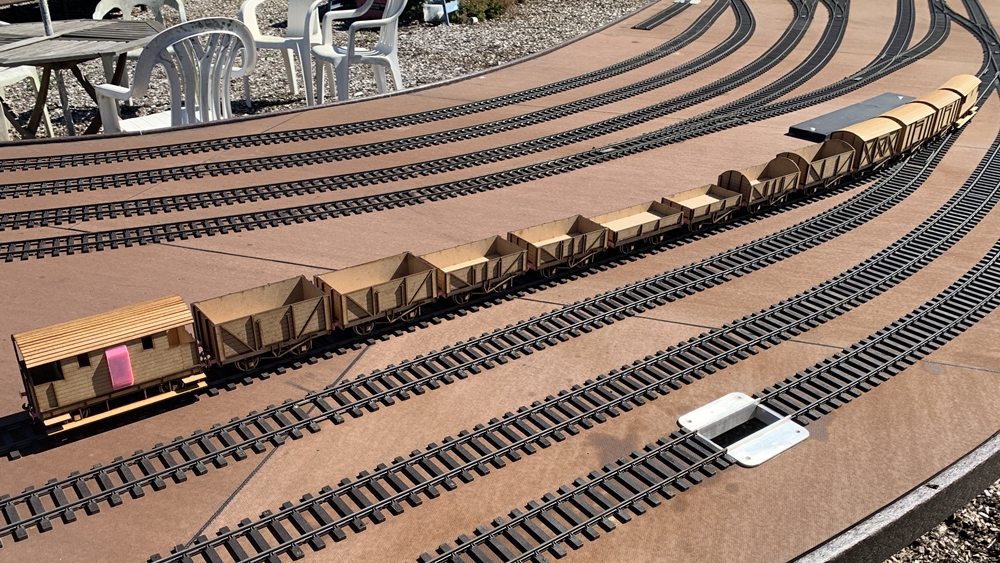 First image taken at GMES of them all together before some testing using human power. 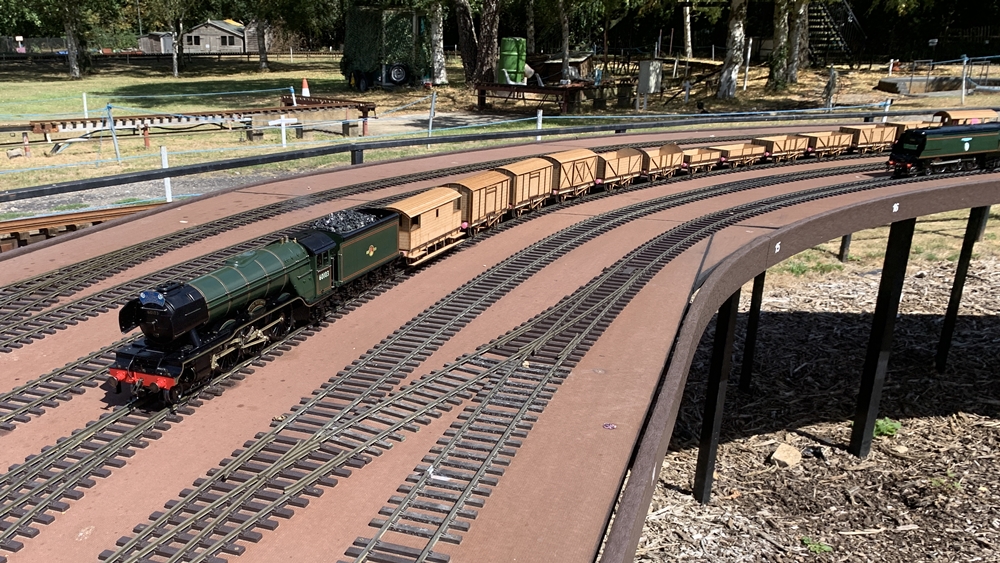 Image taken during the first loco hauled test using a borrowed Aster A3 owned (and operated) by another member. 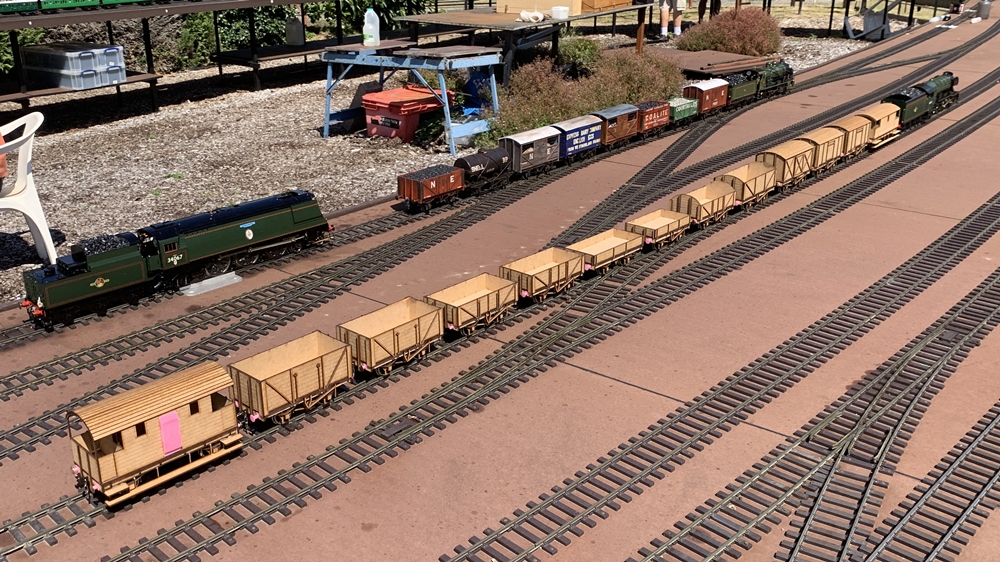 The whole train departing at speed away from the camera.

To say I'm happy with how they're turning out and hopefully I will be able to get some longer trains running once the GWR stock is built and the motive power built (trio of small shunting locos including two sentinels and a ruston).
Bowaters Models:- http://www.bowatersmodels.co.uk

They certainly look good! I'm not sure what Richard Maunsell would have made of the pink buffers though,

ge_rik wrote: ↑
Sat Aug 08, 2020 5:12 pm
They certainly look good! I'm not sure what Richard Maunsell would have made of the pink buffers though,

They don't look so pink anymore! Now in a very fetching shade of SR Brown. 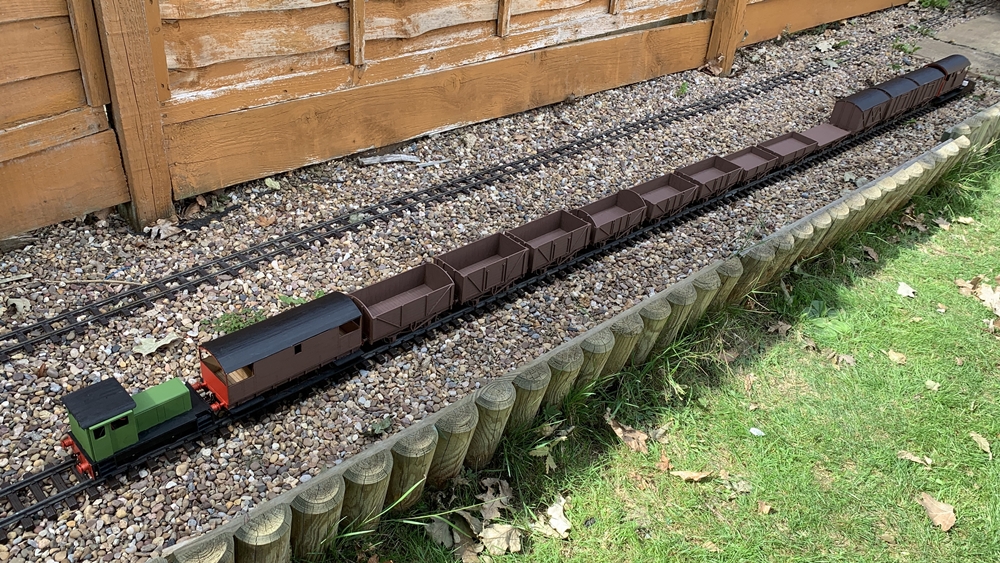 Recent work has seen a set of pregrouping passenger coaches also drawn up and cut out. Soon to be joined by a set of Corridor coaches in due time. I'm gonna need a more powerful engine at this rate although the little Baguley I've made will pull a 4 coach train plus PMV. 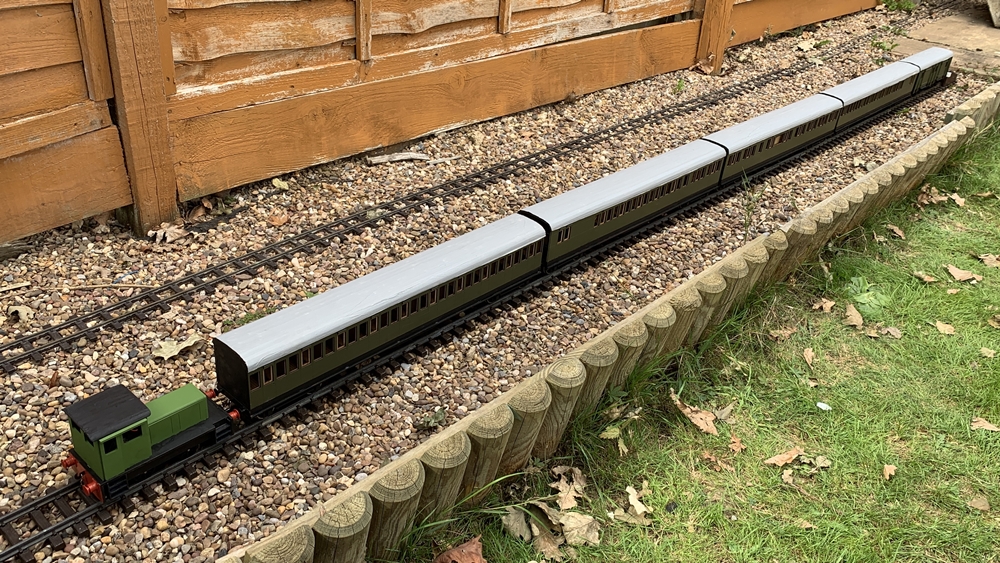 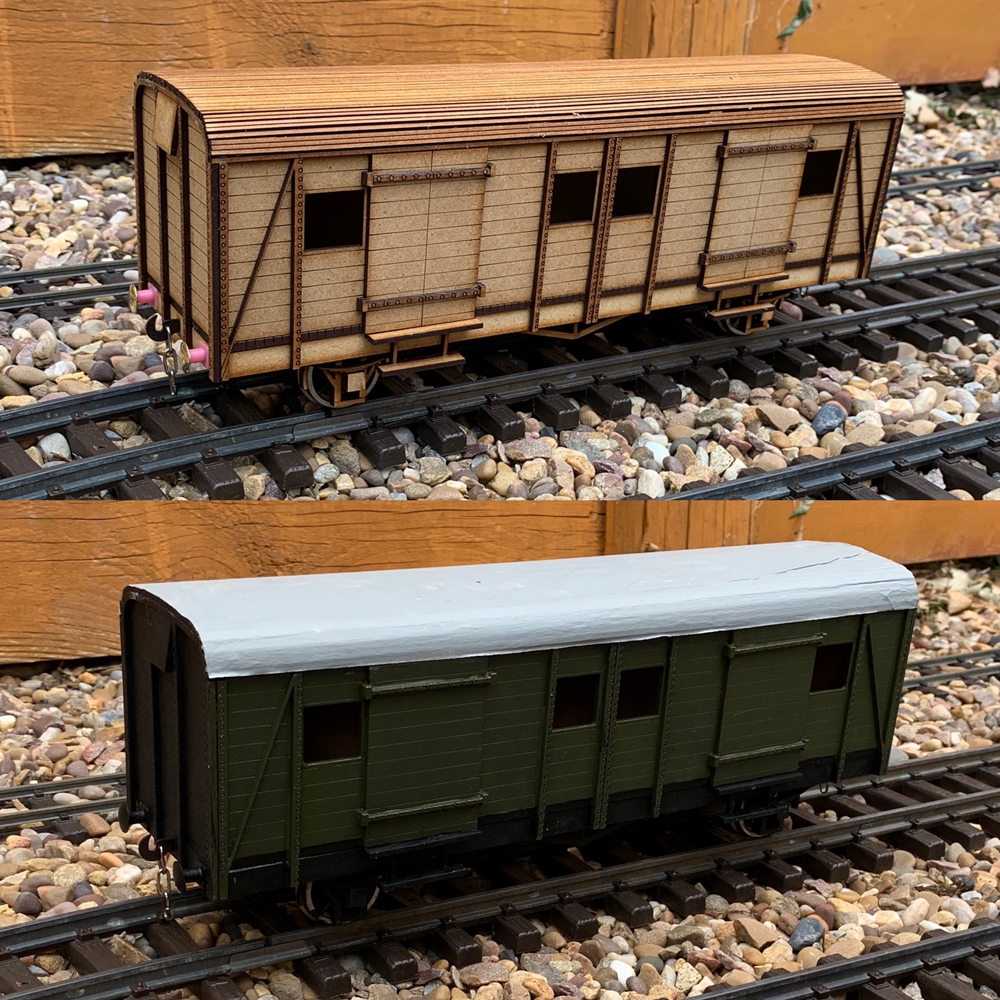 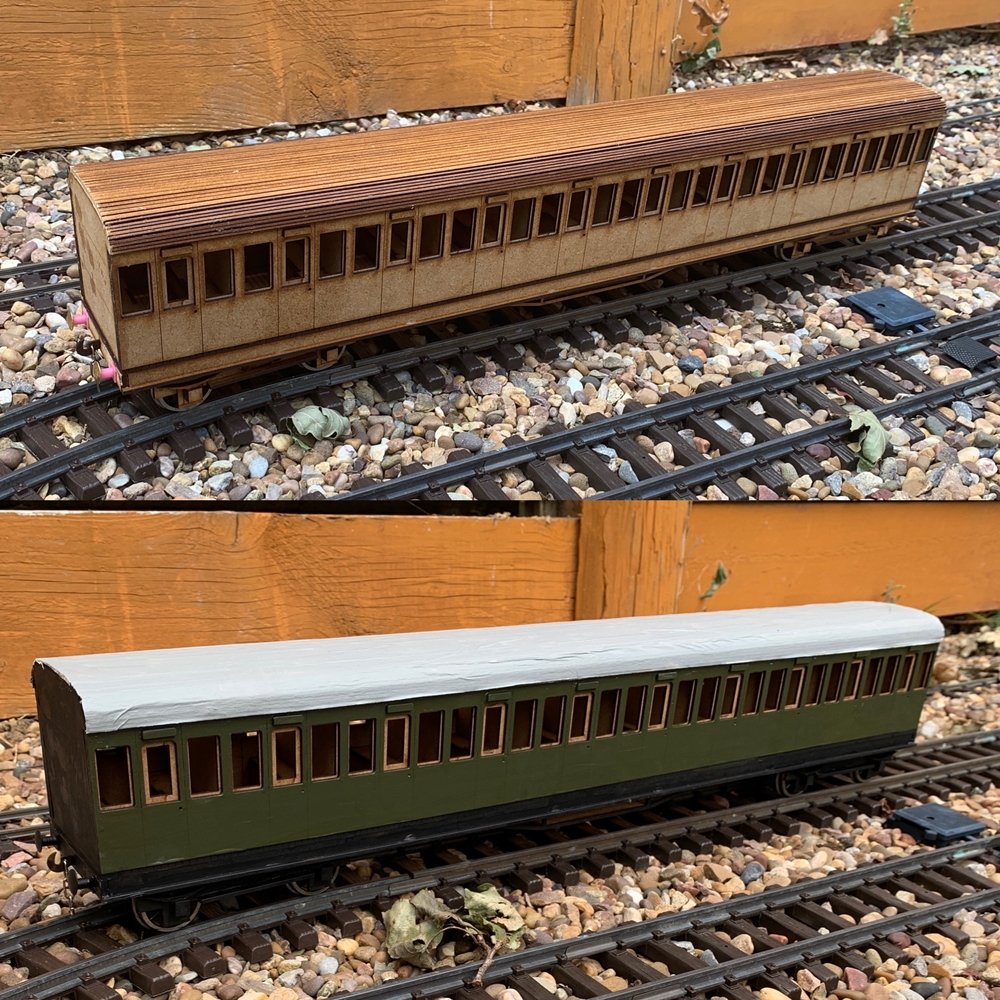 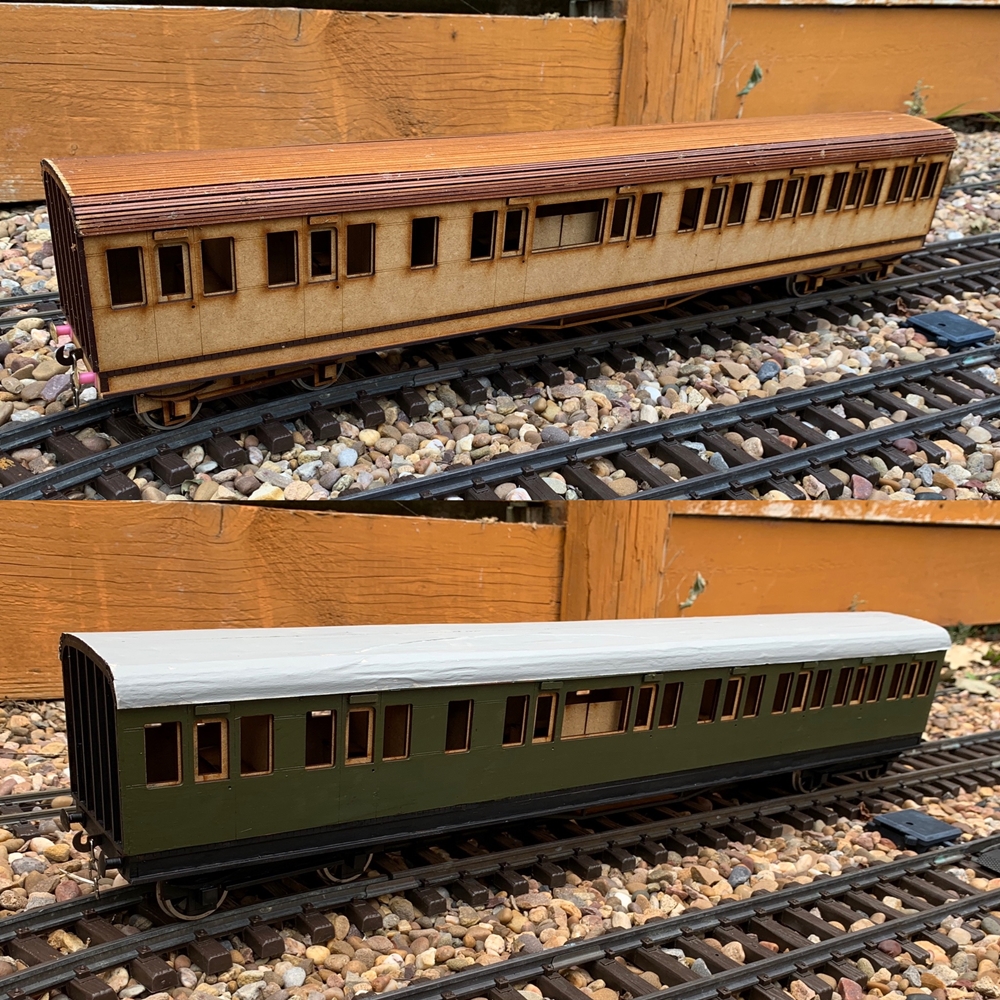 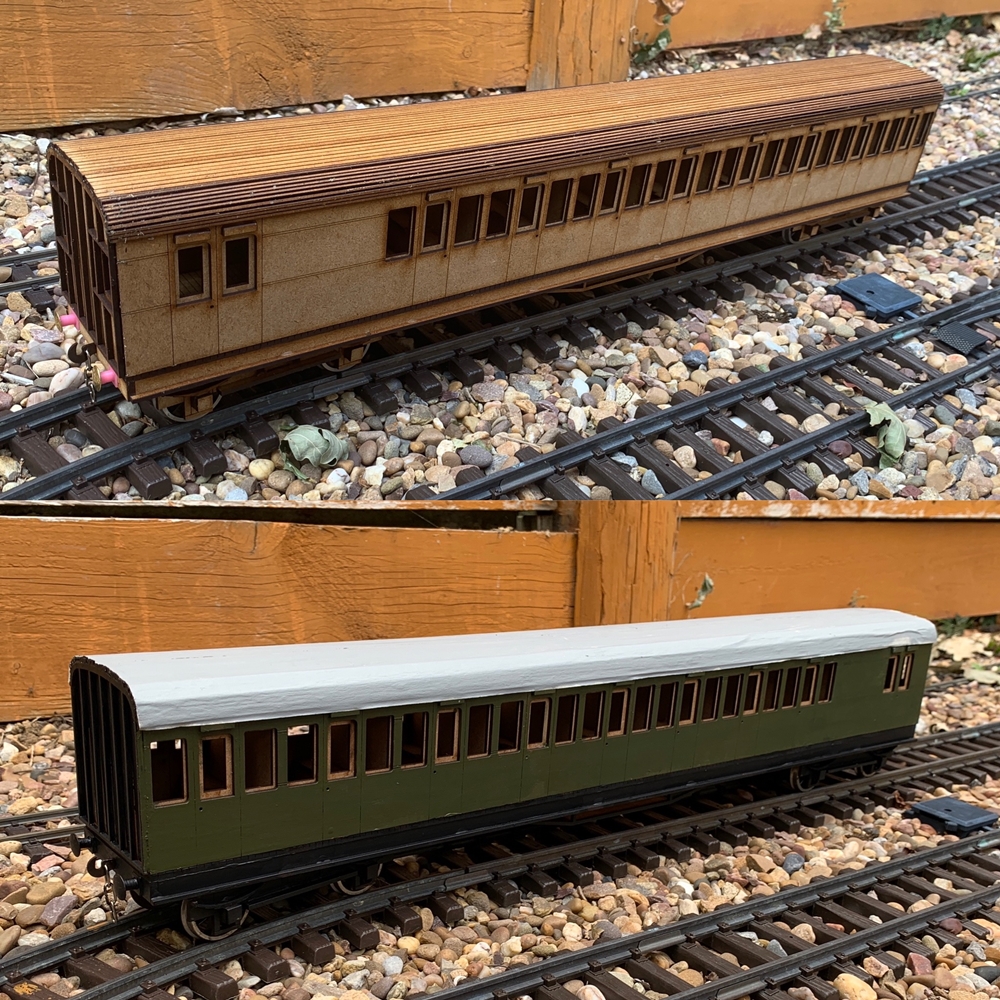 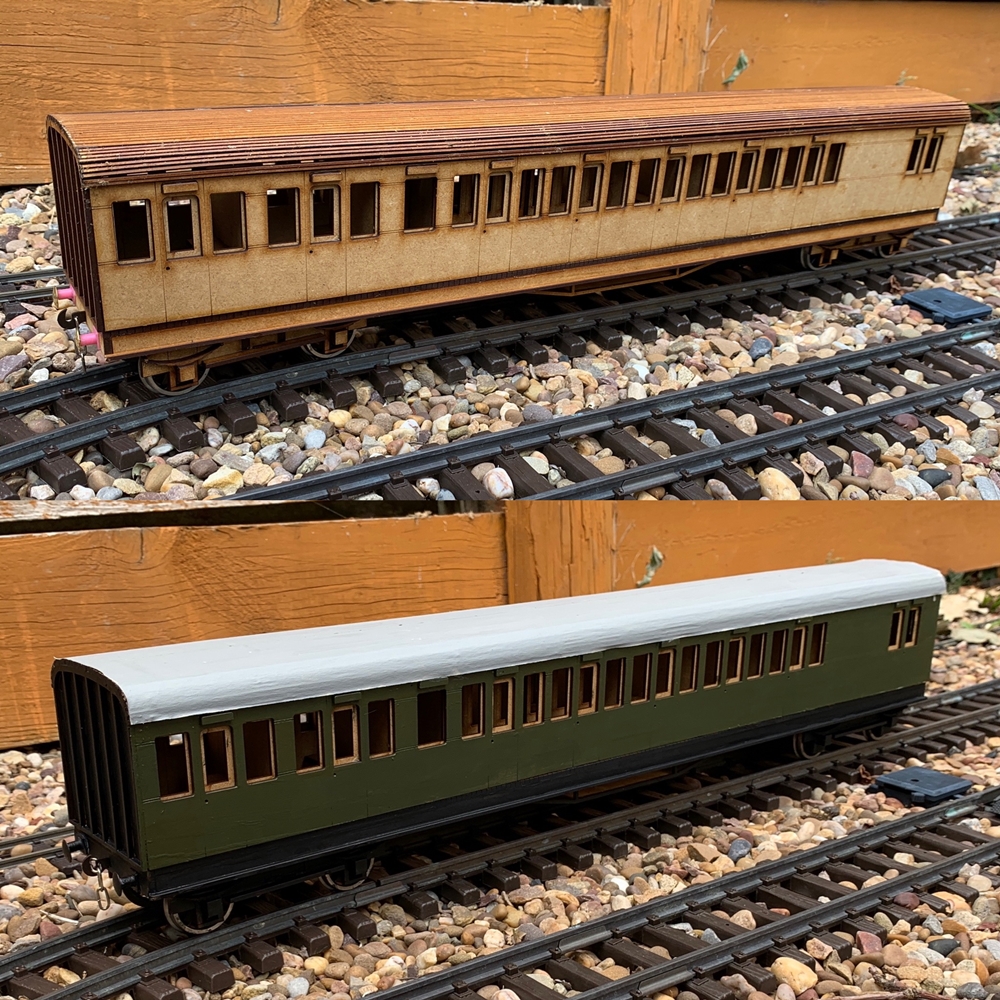 Got another two coaches on the bench to build into a Push Pull set so plenty going on at the moment. And yes, they still count as personal projects. They're only happening because I want one! The corridor coaches I'll admit are slightly more commercially driven but even then I still want a set of Southern Railway Corridor stock of my own. And Maunsell coaches are a long way away........

The first loco, a 162hp Baguley Drewry Diesel Hydraulic, is now complete and awaiting nameplates/numberplates from Narrow Planet and the second loco, a Sentinel 'Y1' which is being finished as GWR No.12, is about to go into the paintshops so that will be the same condition as the baguley. So things are steadily getting there!

Agreed, keep finding myself drawn to G1 but can’t justify the expense when my own line is too tight and twisty for it to look right!
Top

Those coaches look brilliant! As others have said, great to see standard gauge on the forum.

Wagons and coaches are good, looking forward to the GWR stuff, will there be a rake of chocolate and cream?
This year I've probably done 10 times more gauge 1 projects for people ranging from painting figures to building an entire railway, It does make a change and should give me a bit of impetus to finish some of the Corris stock I'm building.

Thanks for all the comments guys!


Cookie wrote: ↑
Fri Sep 11, 2020 11:46 am
Wagons and coaches are good, looking forward to the GWR stuff, will there be a rake of chocolate and cream?
This year I've probably done 10 times more gauge 1 projects for people ranging from painting figures to building an entire railway, It does make a change and should give me a bit of impetus to finish some of the Corris stock I'm building.

Ironically, its Gauge 1 that's being a nice change for me and means that some of the longer term 16mm projects may end up happening later this year!

Speaking of the plans, finally done two more coaches off the to do list and one engine became two! The push pull set is a development of the existing coaches in that they're a conversion of them which is what BR did in the early 50s. The SR did some similar conversions as well during the mid to late 40s too but the BR conversion of set 662 I have limited photographs of. The second engine, a LNER Sentinel Y1, is now finished and ready for extended running trials same with the baguley. Both having run during the last Guildford open day almost nonstop aka a proper baptism of fire when it came to running so they're definitely run in! Just need to work out the chassis design and get the parts then I can make the third shunter, a Ruston 88DS. 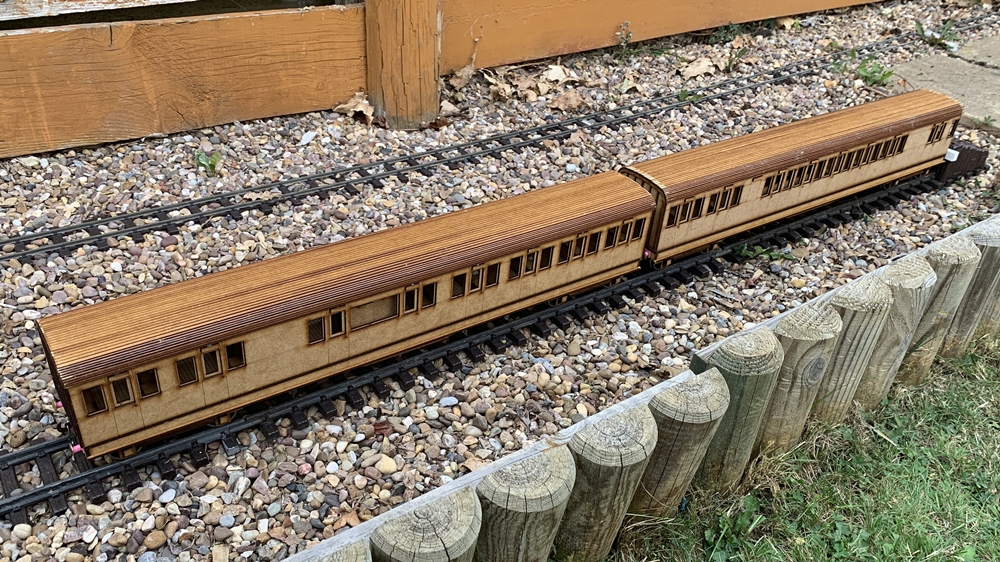 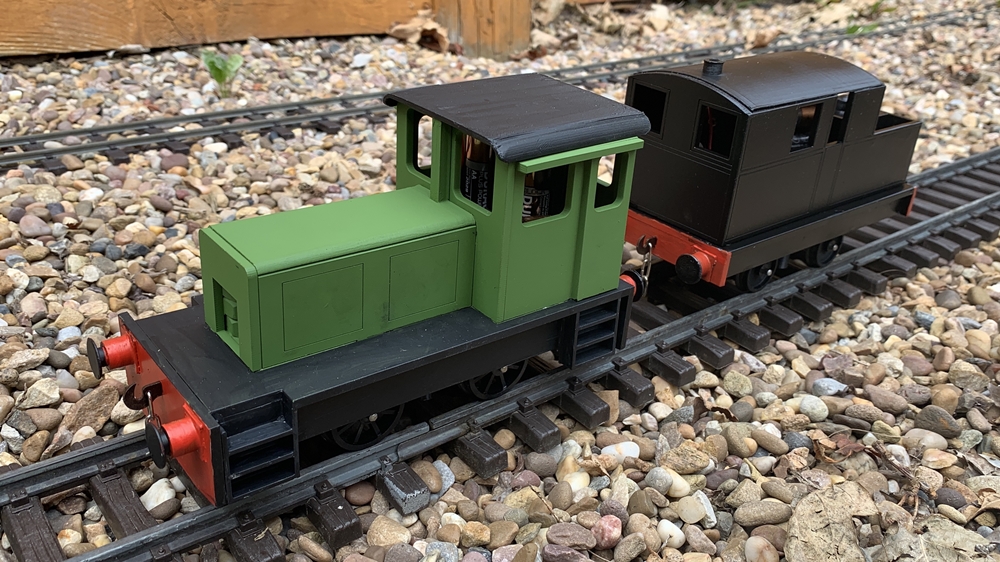 The two shunters together. 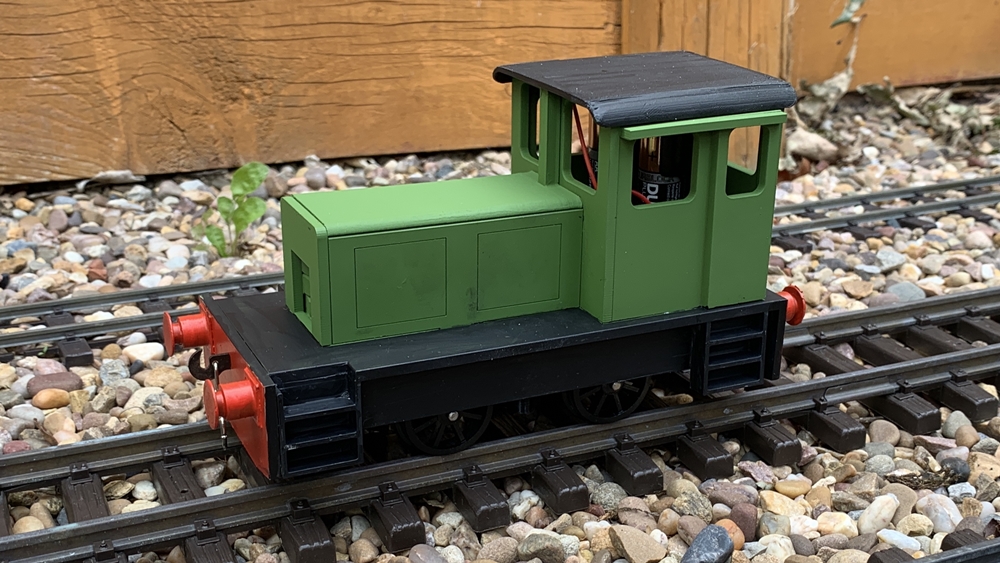 The Baguley Drewry Up Close 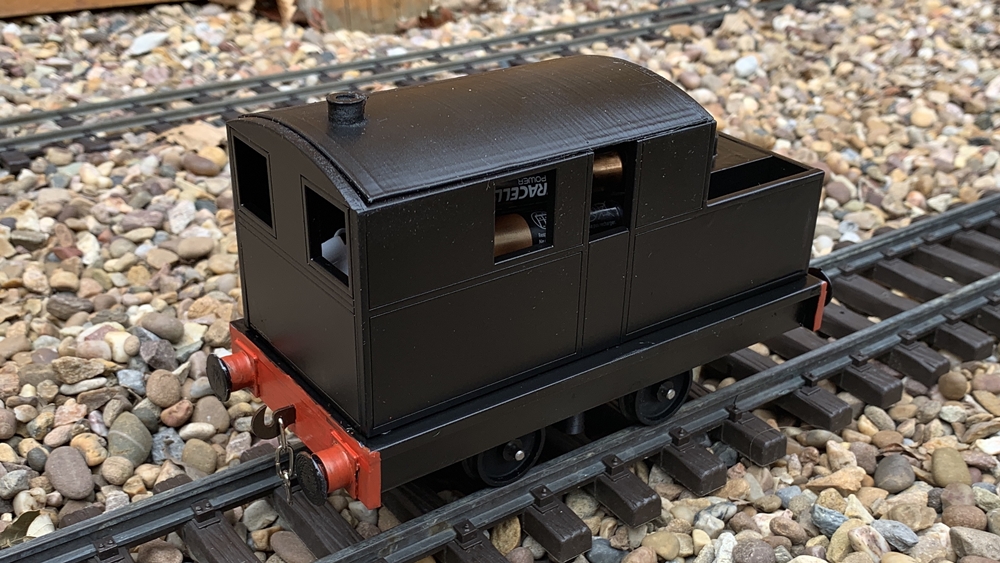 The Sentinel up close

At some point, I need to make something more mainline ish although which one I'd have to work out in slow time. Seeing the budget is unlikely to stretch to a suitable live steamer for a long time to come (would love a Aster West Country/Schools or Accucraft Adams Radial/B4 at some point), a cheaper battery powered engine will be the option I most likely go for. Although which one I'd need to think about (option list is SECR C Class, SECR O1 Class, GWR 2251, GWR 56xx, GWR 57xx, LMS Jinty or LMS 4f)...........

Hopefully I can get the new stock down to guildford on sunday from some test running before sending the push pull set into the paint shop to be painted BR Carmine! 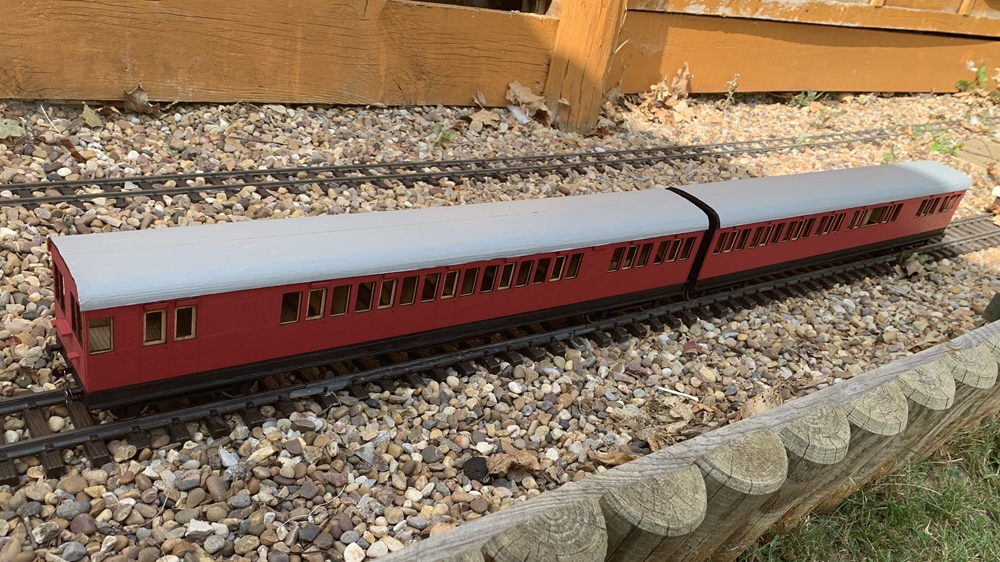 The push pull set is now in BR Crimson and looks great! Just like the others is waiting on decals to arrive at which point it will be truly complete. Next job will be to do a second 100 seater this time with Tumblehomes modelled on it. Well I need to test my design theory before I can worry about any others. Will I recut them all with Tumblehomes? No. Can't afford that so I'll just do the one. Fortunately, I wanted two 100 seaters anyway so to differentiate the two, I'll probably paint the second one into Malachite. What can I say, I actually like it but I can understand why some others won't. I also need to draw up the Thanet Bogie coaches which are the next ones on my to do list which will mean I finally have some corridor stock to run!

Having wanted a pair of 100 seaters, I was kinda wondering how I'd do it when I have a rule of only one of each coach I build being in existence at once (I only have limited storage room in the shed for coaches) so when a customer asked could I modify the now released kit slightly, what a perfect reason to have two! So I do. Both of mine will end up being lettered and numbered like the surviving pair at the Bluebell Railway but for now, I plan to just enjoy them and get them running together! 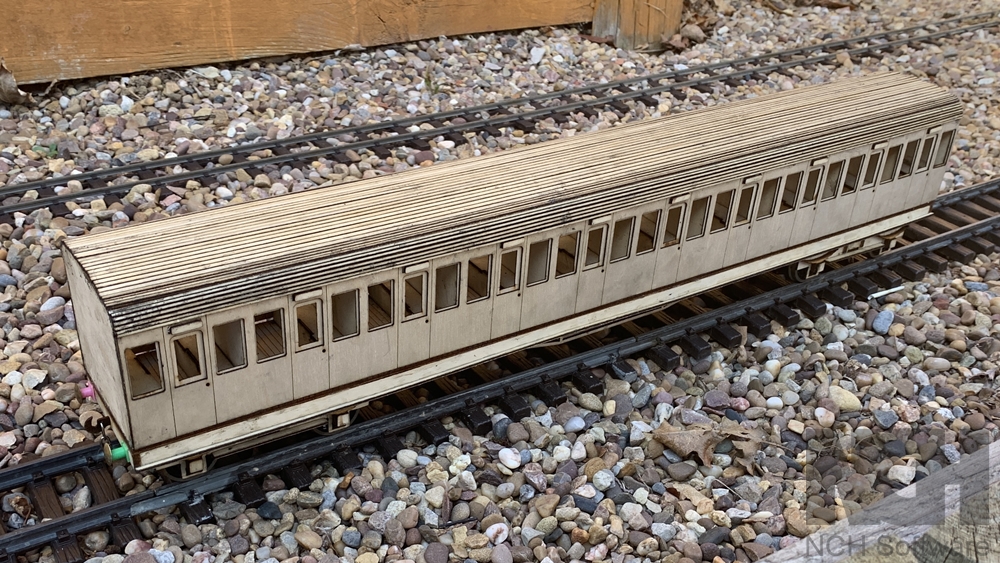 I'm really enjoying the Gauge One stuff, just lovely... Of course, you really need a "birdcage" brake to go with the Bluebell carriages...

Keep up the good work, and thanks for the pictures!

Keep up the good work, and thanks for the pictures!

Funny you should mention a birdcage coach...... 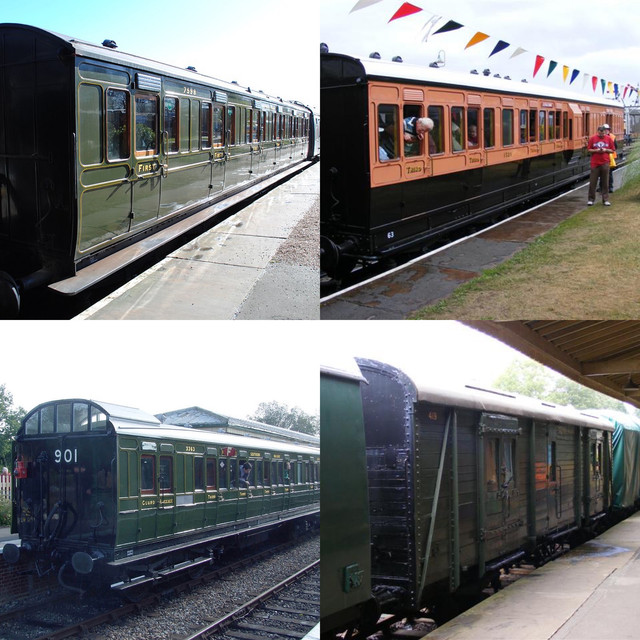 These four are the next four projects for pure personal use. The LBSCR Coach might get released in time but the other three aren’t planned too. But never say never!

Images not mine and off Wikipedia. Used under Creative Commons.

Users browsing this forum: No registered users and 15 guests