A place for discussing battery-electric locomotives, whether they're diesel, steam or even electric outline
Post Reply
31 posts

Welcome again to the fantasy Southern Region that might be 3’11” gauge and where, due to one of those hiccups in the spacetime continuum, a locomotive from the 1960s has rematerialised from the 21st century and 500 miles away...

In the past five years or so, astonishingly, after more than 50 years in service, some of the Class 73 electro-diesels have been completely rebuilt and fitted with more powerful engines, for use in Scotland — on the Caledonian Sleeper between Edinburgh and Aberdeen, Fort William or Inverness. And still equipped* for SR third-rail 750v DC. It’s true!

My celebratory, fun-scale version has two Piko motorblocks from G-bits and is battery-powered — but with Loco Remote wi-fi control (when I’ve wired it up correctly), using an old iPod as a controller. (New Deltang receivers weren’t available all year and I was having to swap my existing stuff between locomotives anyway). The ‘scale’ ought to be somewhere around 1:26 — except that really the dimensions were established in advance and the proportions and detail of the prototype adjusted to fit (and there are mistakes as well, of course). Like my previous efforts, it’s not accurate but I still want it to look at least vaguely believable.

It’s mainly plasticard — with boardgame counters, buttons, a cooling fan from a PC, aluminium mesh, wire, strip, rod, mouldings; silicon-moulded resin; a few parts from Cambrian, GRSUK, SLR; foamboard and, inevitably, mountains of filler... Attempting to save time and effort and to keep them consistent, I made only one, much simplified and ‘flattened’, bogie side and from that cast all four in resin — with a few plasticard bits to be added subsequently (some after painting). I had hoped to fit sound and synchronised filthy black exhaust (I know... ) but I haven’t got anywhere with that. It’s just about 600mm overall and will weigh getting on for 3kg completed. Cost of components and materials totals around £300.

It’ll be turned out in Caledonian Sleeper livery, now that I’ve got my hands on some ‘Midnight Teal’. With luck, the paint job should distract from the dodgy bits! Sadly, I don’t think building a rake of Mk5 sleepers to go with it is really practical.

*Online sources suggest (some) pick-up shoes have now been removed (though presumably they can be easily refitted anyway). There are no plans for third-rail electrification in the Highlands.

Latest: Recent pictures (Nov 2020) online show a Class 73 at Georgemas Junction, the last station before Thurso or Wick, at the end of the Far North line: 150 route miles north of Inverness (and about as far as you can get from Eastleigh). Hey!
Last edited by BertieB on Mon Jan 25, 2021 1:06 pm, edited 1 time in total.
BertieB
www.toytrainsinthebackgarden.co.uk
Top

Just brilliant, I love your creations, they sit so naturally and look right somehow.
The NHS will be further stretched with rivet-counters seeking counselling! Keep up the good work.
The best things in life are free.... so why am I doing this?
Top

Instantly recognisable.... um.. well... I recognise it instantly but umm...!!

In keeping with the theme, if you can't quite see a rake of Mk5 sleepers, why not try a rake of Mk 2.5 sleepers?
Philip
www.tinyurl.com/philip-trains
Top

I want to see a rake of "might have been" Bulleid SR sleeping cars... Or Driving/Luggage van, so you can recreate the Gatwick Express...

That's a lovely model, a real work of art, and yes, instantly reconisable. Growing up in the Southern Region territory, I've got a big soft spot for 73s - and 33s too, surely a candidate for the B Scale treatment?!

I saw one of the real Caledonian Sleeper 73s once, from a very long way away - I was at the top of Arthur's Seat, watching it trundle round the Edinburgh suburbs with its rake of sleeping cars...

Looking forward to seeing it in action...

I see the gbrf 73’s every now and again at work, you’ve definitely captured the look of them, very impressive!
Top

Looks fantastic, I spend a bit of time around the real ones and this captures the essence brilliantly.
Top

Thanks for all the kind and generous comments.

I like to imagine the BBC dramatisation of that first meeting, where somebody seriously pitches the idea of providing motive power — for a prestige, revitalised service for which the Scottish government is coughing up enormous sums — by refurbishing 50 year old, essentially third-rail electric locomotives designed for use only on the Southern Region...
BertieB
www.toytrainsinthebackgarden.co.uk
Top

That is a really beautiful piece of work. I have no idea of the prototype but I like the way you have said that you do 'massage' the dimensions to make it look 'right'. Great work.
Greg from downunder.
The Sandstone & Termite's website: http://www.members.optusnet.com.au/satr/satr.htm
Top

Thank you. I followed very much the same sort of approach you describe in your excellent ‘A scratchbuilt “Big” diesel’ postings, on this very forum. The 73’s based on a real standard gauge prototype but, of course, I’m doing it in some sort of weird hybrid ‘scale’ that sits comfortably with 45mm gauge track; adapted LGB-sized rolling stock; can cope with garden railway radius curves; and so on. Max length, width and height are all predetermined really. Cheers.
BertieB
www.toytrainsinthebackgarden.co.uk
Top

BertieB wrote: ↑
Tue Dec 08, 2020 8:05 am
I like to imagine the BBC dramatisation of that first meeting, where somebody seriously pitches the idea of providing motive power — for a prestige, revitalised service for which the Scottish government is coughing up enormous sums — by refurbishing 50 year old, essentially third-rail electric locomotives designed for use only on the Southern Region...

In all seriousness, given the preferred axle load limits and the sheer cost of a brand new loco design, there would have been remarkably few credible alternatives, and once you have ruled out the credible... (as Sherlock Holmes never would have said). Obviously that point would quite possibly have been lost on the attendees of your hypothetical meeting.

Also in all seriousness, a lovely model.
Top 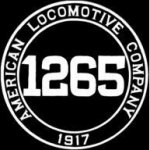 It is, isn't it? How's the painting coming on Bertie?

Painting’s coming along OK — though I’ll admit that at present it does look a bit scabby: I’m part way through tidying up the decal edges and other sloppy bits, prior to doing a couple of coats of varnish. As you can probably see in the picture (from earlier this evening) there’s still wet paint.

In super sophisticated colour testing a few weeks ago, satin finish (and I believe, correct) ‘Midnight Teal’ appeared, at least to me, to be more-or-less black (in miserable rainy afternoon light, or shadow) or navy blue (in brighter daylight) — much darker than it seems in photos of the real thing. Perhaps it’s the ‘scale effect’: shiny full-size stuff reflecting its surroundings and conditions in ways that models can’t? Dunno.

I looked for swatches and spec of lighter tones of the same sort of hue — a more conventional teal (dark green-ish blue) — eventually ordering a rather pricey, mixed-to-order spraycan and touch-up bottle.

So it’ll be a Caledonian Sleeper livery that isn’t really the right colour but looks more like it might be. I hope. 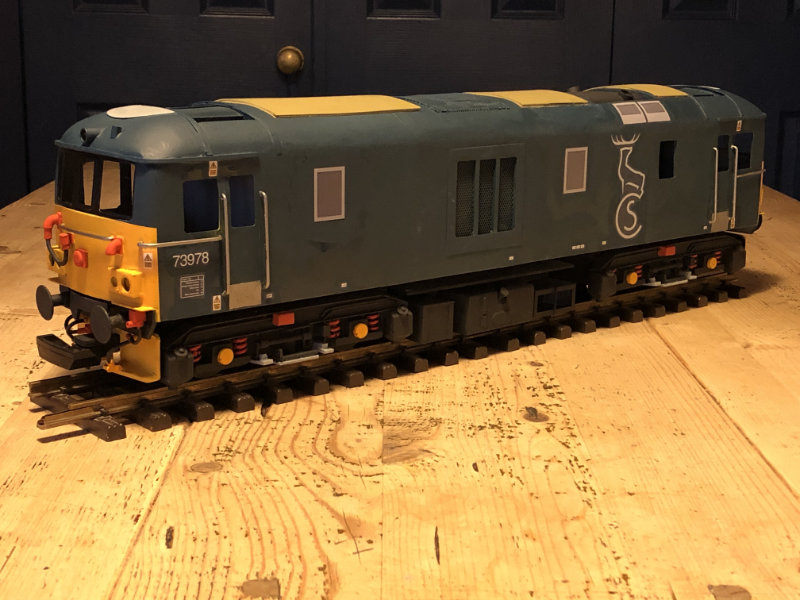 'Warm' artificial light, as here, and it looks ‘more green’ (as do the real ones sometimes); in daylight it appears ‘more blue’?