Yet Another PDF Baldwin

A place for discussing battery-electric locomotives, whether they're diesel, steam or even electric outline
Post Reply
18 posts

Sorry this is late..

Thanks Mitch, I'm looking forward to seeing more of your progress.

05/10/2020
Before the speaker enclosure can be sealed, the wires of course need to be trimmed and connected. Having the bonnet behind helped determine the wire length. The speaker is a nice little unit from Jaycar. I'm looking forward to seeing how it sounds with the Mtroniks soundcard. 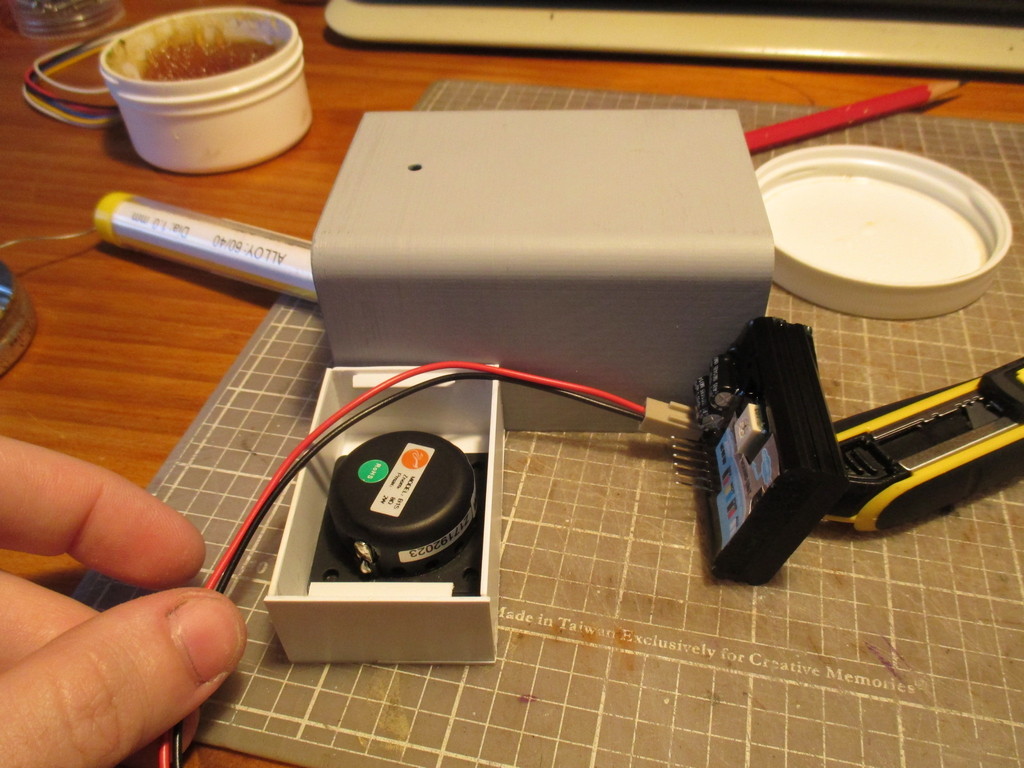 06/10/20
With the speaker enclosure done, a shelf was fitted within the bonnet, upon which the batteries will sit. One of these days, I'll remember to buy an assortment of large heat shrink, and stop holding my battery packs together with electrical tape.. 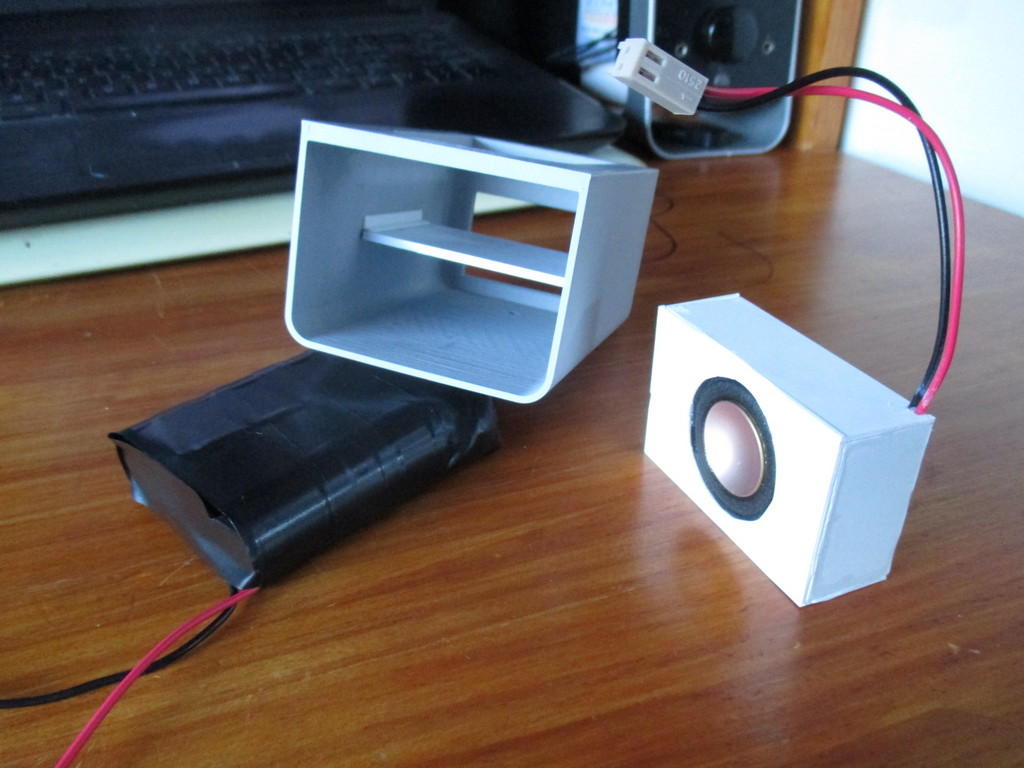 07/10/20
As the cab and bonnet both screw to the chassis, I would like the wiring not to permanently tie these modules together. After a lot of umming-and-ahhing over wire routing, I decided to hide the charge socket within the left-side sandbox. Whilst the right-side sandbox is printed along with the driver's console, The left-side box isn't included with the kit. This suits my purposes well, as a printed sandbox would be filled with internal supports, which would've had me fabricating a hollow replacement anyway. 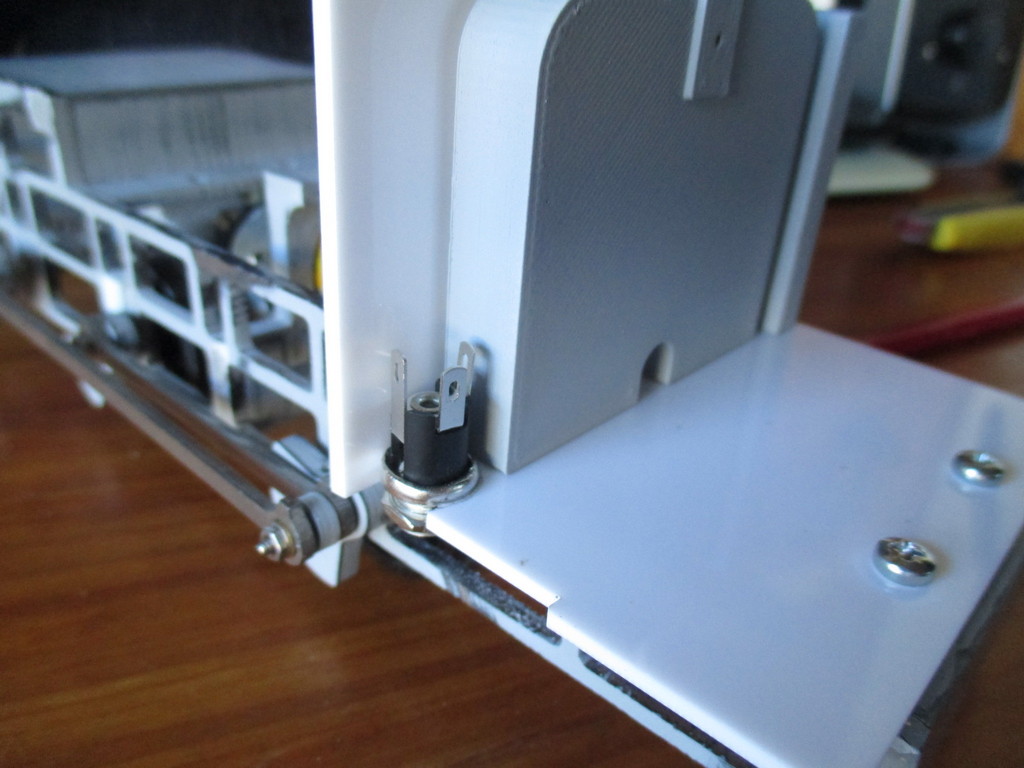 The U-shaped "spring-bearing-axlebox-pusher-downer-things" (You know when you have the proper name of a part at the tip of your tongue?) were represented with cut-down pieces of ¼" styrene angle. The springs were cut slightly over-length from spare M6 bolts, then filed to fit and retained with superglue. The filler over the countersunk screws in the frames was filed flat and re-applied where needed. 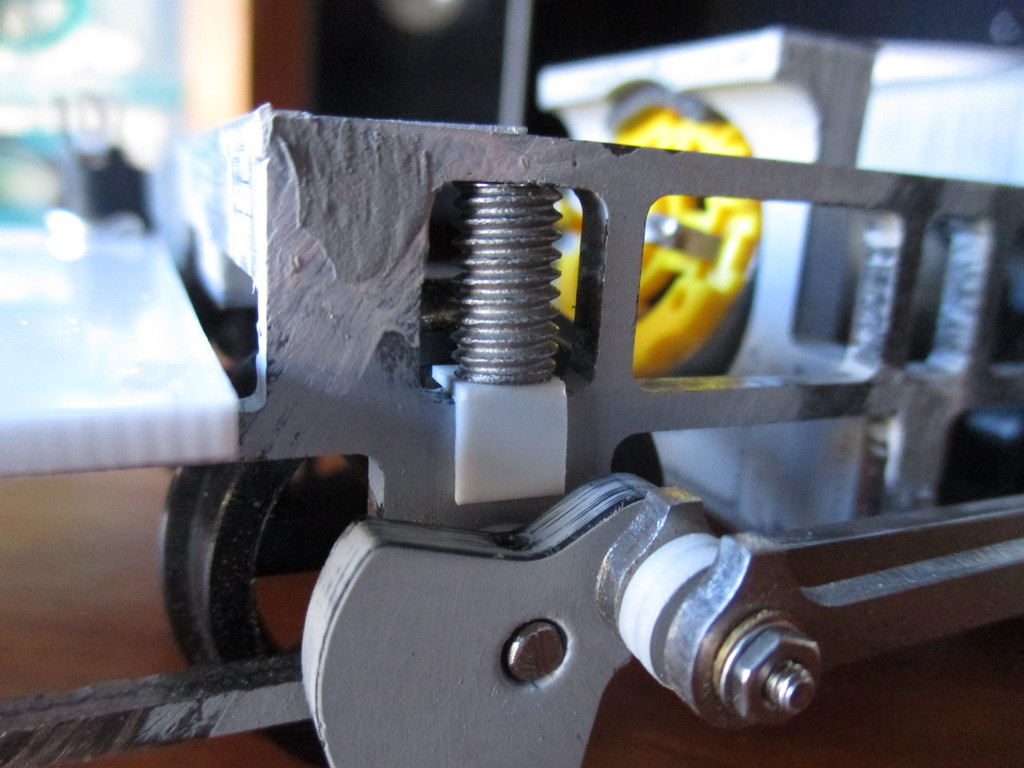 Mudguard time. For whatever reason, I didn't spray these with filler-primer when the other parts were done, so they took quite a lot more sanding than they otherwise would've. Even then, the top sides were left raw, as I decided to fit overlays of .005" styrene. Don't have any drawings of the prototype, but photos were adequate in working out the rivet locations, marked in pencil. Twisting a small Phillips screwdriver makes a decent rivet head in this thin material. 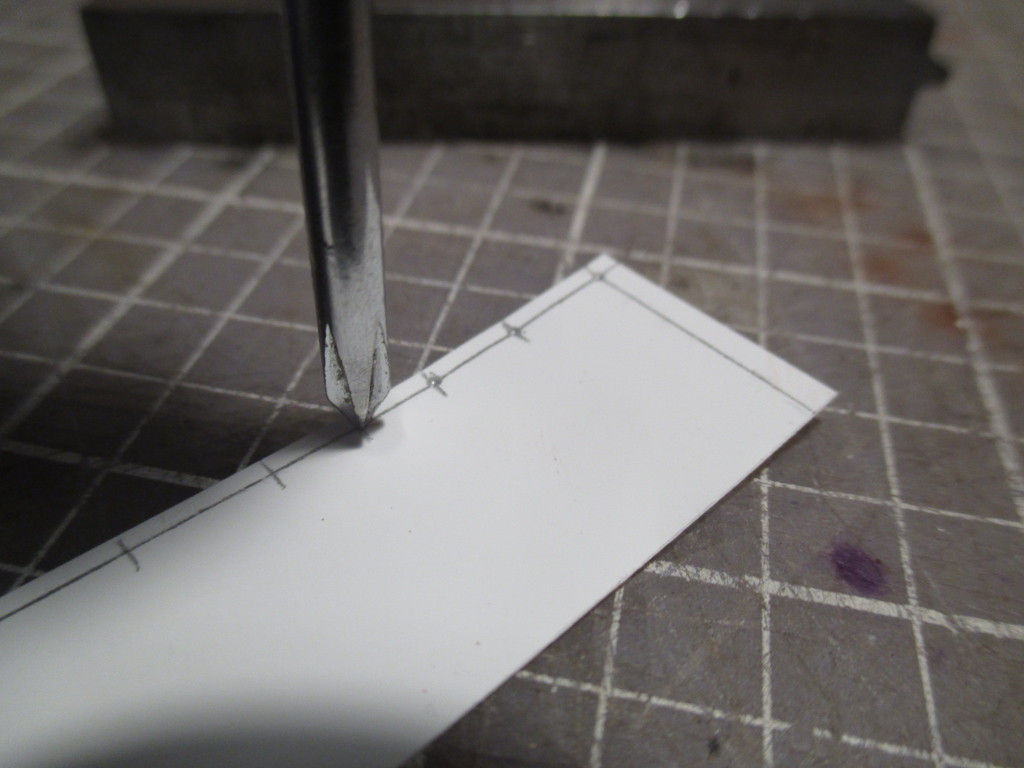 I had to make this overlay twice, after making the mistake of fitting the parts together with solvent - which caused areas of the overlay to shrink and leave hollows in the surface. Superglue to the rescue again. 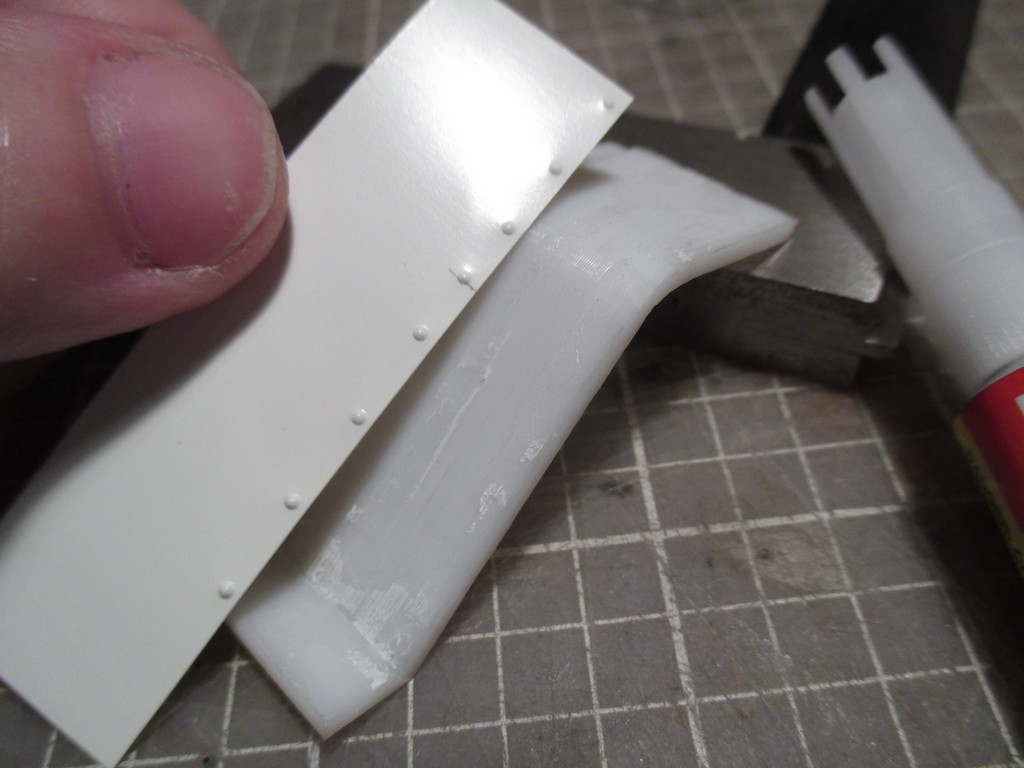 I was however, able to use solvent when allowing myself to get carried away in detailing again. Having done the mudguards like this, I've shot myself in the foot - I Doing anything less to the bonnet and cab would likely look bad in comparison..

On the other hand, it's a reason to try out my new rivet press.. 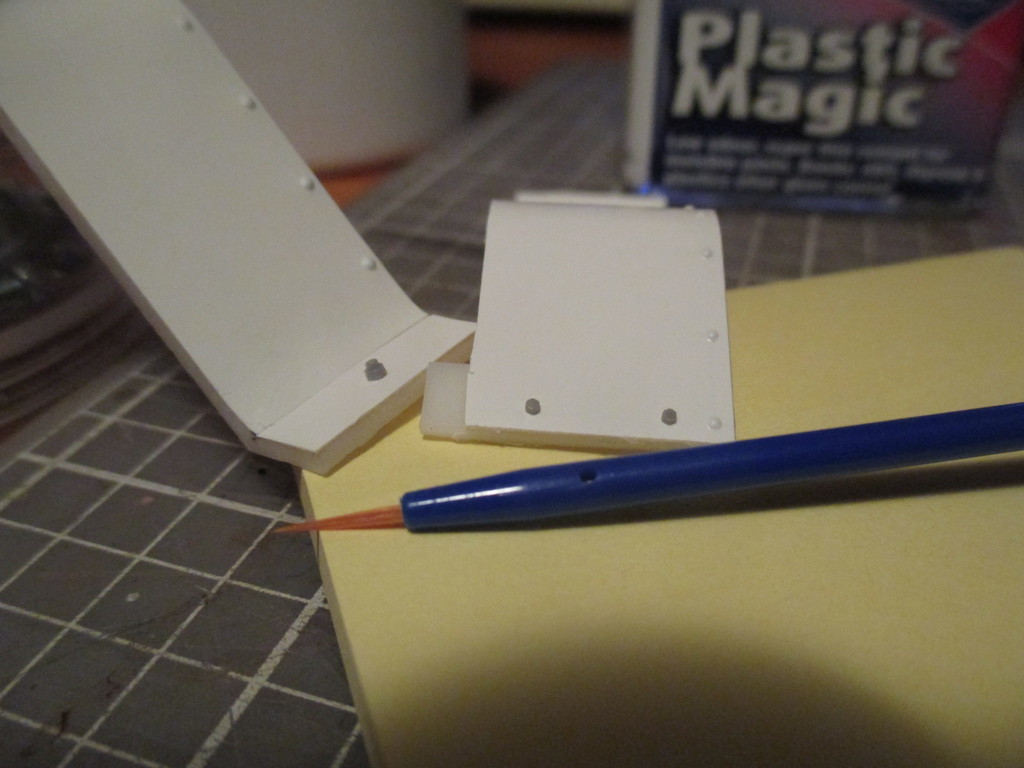 Quite some thought was given over couplings. Cant be bothered soldering up brass angle to make proper scale jobs, so I'm opting to use a spare pair of Accucraft chopper couplings. (I'll admit those are pretty good, if a bit long)
My excuse is that this loco was sold after the Great War to some other line that ran with low-slung choppers. The loco was later sold to it's current owner (Fictional Unnamed Sugar Mill Co.) which had slightly higher couplings, around 22-26mm above railhead. In typical industrial fashion, they simply flipped the buffers upside down to move the buffer faces a little higher, better-suiting the local stock. It's still a bit low, but I'd like to slightly lower all of my couplings to a height more befitting a cane tramway as it is.

I experimented with permanently-fitting a chain to the chopper "blades" pivot bolt, but during a test too brief to photograph, this tended to pull wagons off the line over tight pointwork. For now, I've flipped the buffers the "right" way up again, but will likely replace the main pivot bolts with the "hook" type pivot pins.
The headstocks were sanded and drilled to fit the couplings, assembled with M2 hex bolts and some very nice one-size-smaller nuts. 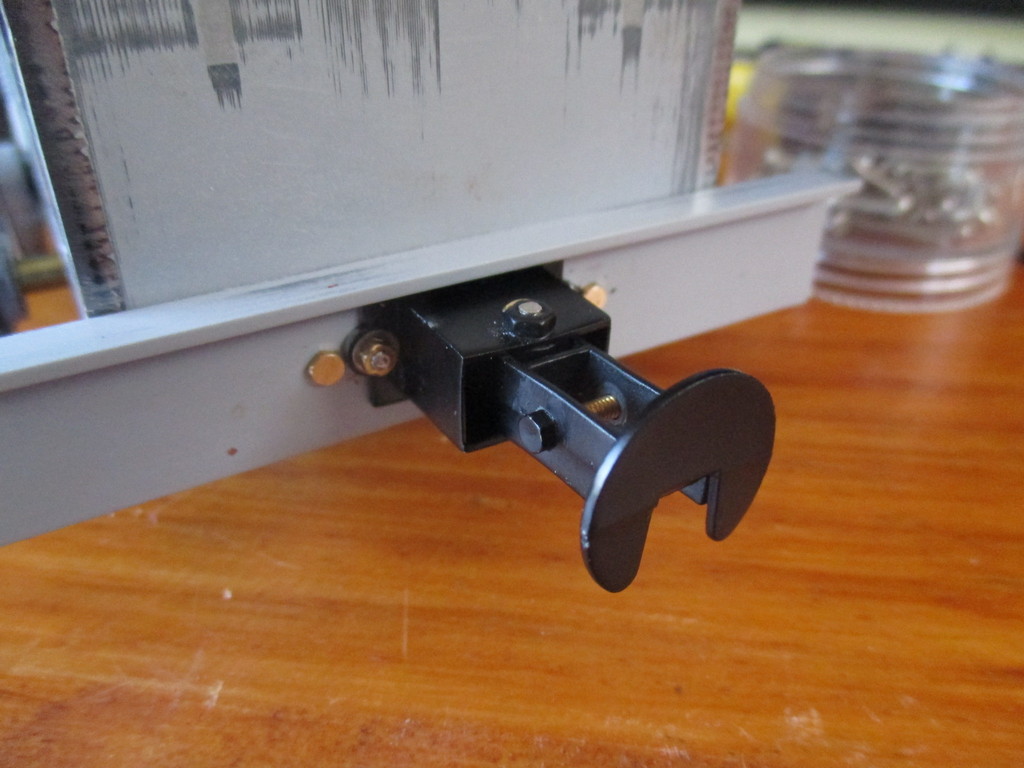 Another issue the brief test revealed was that the grub screws holding the quartering were unsurprisingly not to be trusted. I have a special hatred for grub screws, especially when they force me to half re-do the quartering again, but by hand, because the rods were retained with loctited nuts, preventing re-use of my jig.
So I did what I should've from the start - binned the grub screws and cut down some spare M2 bolts to be as un-obtrusive as possible, and use those as a compromise of appearance and retention. I doubt even I will notice these extra hex heads in operation.. 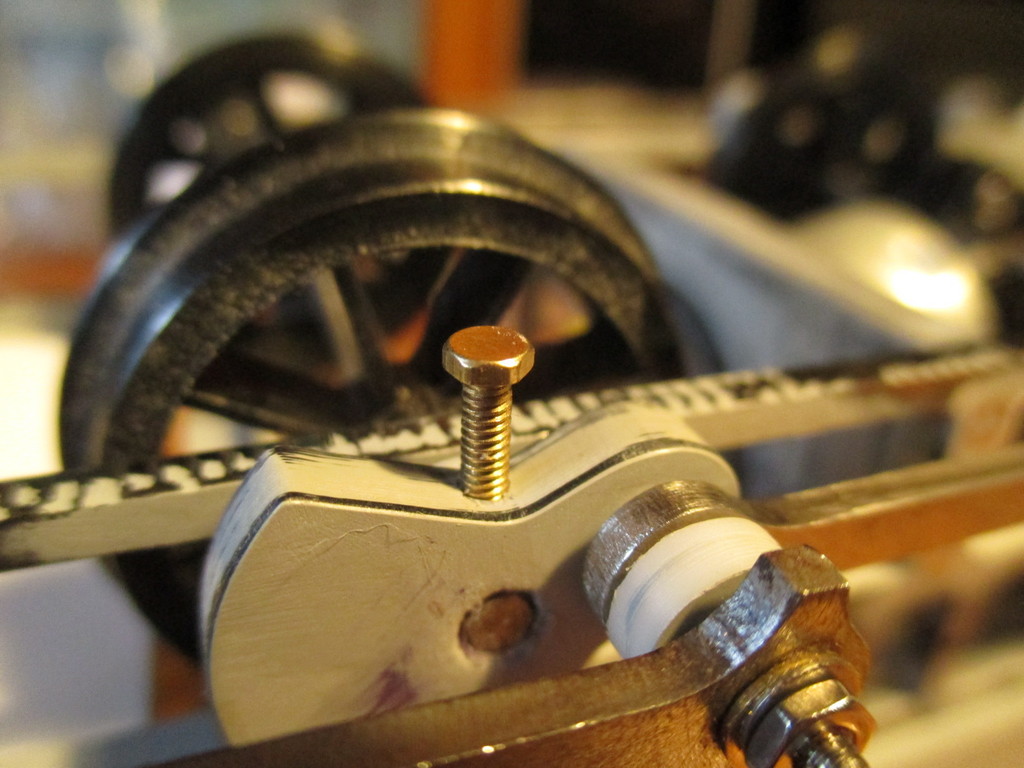 At the same time, the dummy clamping bolts were added to the front cranks. 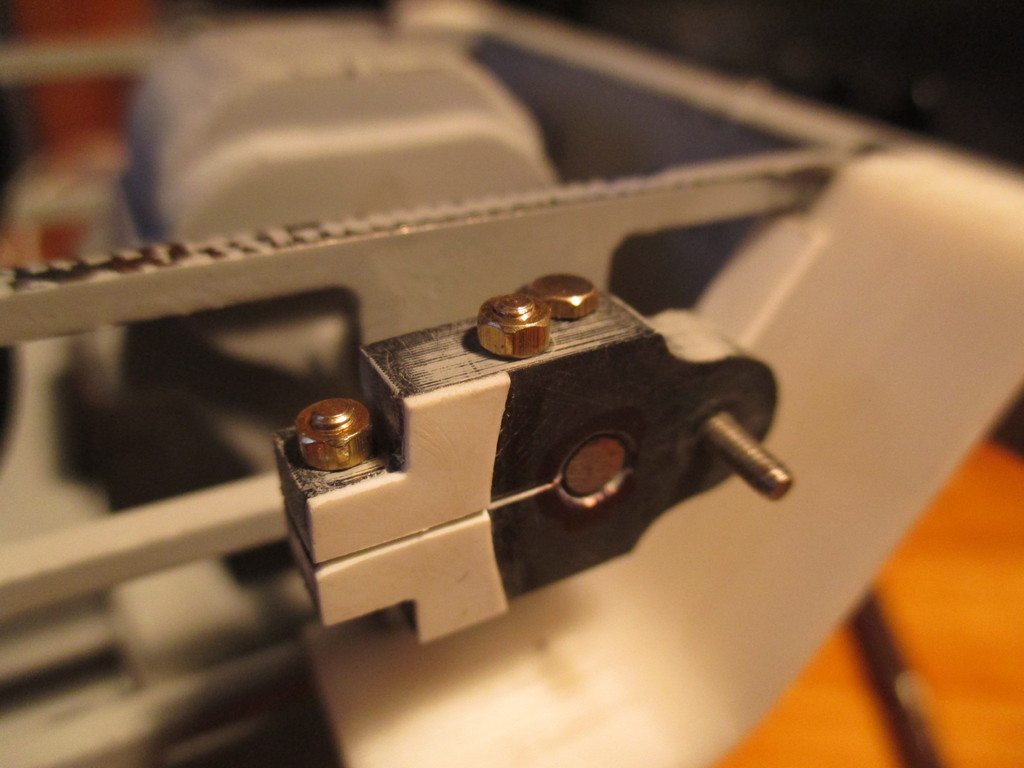 10/10/20
Wiring "dummied up" for another test, after fitting the connecting rods. I'll have to re-program the receiver, so that channel 5 (controlled by the "bind" button on the transmitter) can be used to toggle the engine on and off. As I've only needed the basic Deltang Tx10 transmitter so far, which can't be used for re-programming, I've just ordered a Tx22 which can be used for re-programming. That's two birds with one stone, as I would like the option of switching between multiple locos without risking damage turning 'em on and off all the time, anyway.
As I'll be running the loco at Zillmere on Saturday, I relented and oiled the motion. Will have to degrease those points with alcohol when I get to painting..
The cab will be mocked up before Saturday, as it's a public open day and even this work-in-progress should look somewhat presentable. 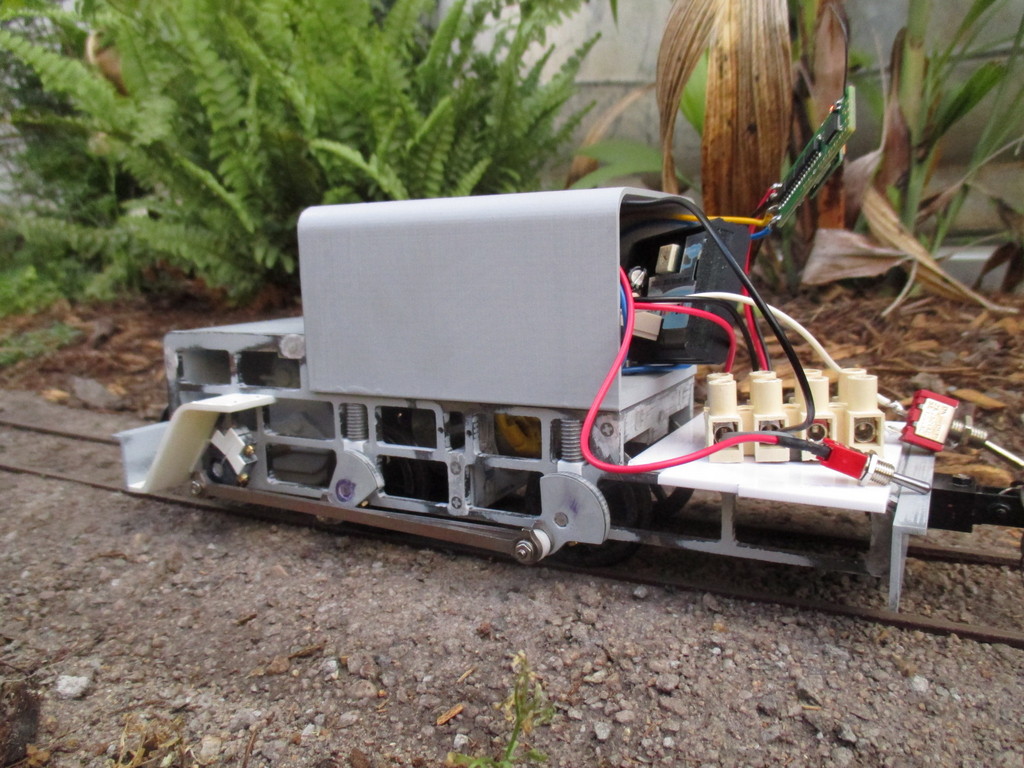 I hope there's no strangeness to this writing, as it's 12:26am of Friday night before the open day, at the time of writing; And I can't be f***ed proof-reading this lot.

Neat work Aaron and I hope you have a great pubic open day, something which is a distant memory for us in UK.
The best things in life are free.... so why am I doing this?
Top

Thanks Peter, it was a good and very busy day, due to earlier train shows in 2020 being cancelled.

The Baldwin managed alright with the wholestick trucks at home, but it struggled and slipped very badly at Zillmere. I'll put this down to oily residue, but even so, these trucks are far heavier than they need to be. They were weighted to 270g each, to negotiate a terrible S-bend imposed by a tree on my first tramway, which is thankfully long gone. They were brought to be sold off anyway, and the planned replacement rake of thirty cane trucks, will be much lighter than these.. In any case, I'll have to discreetly pack some lead into the loco. 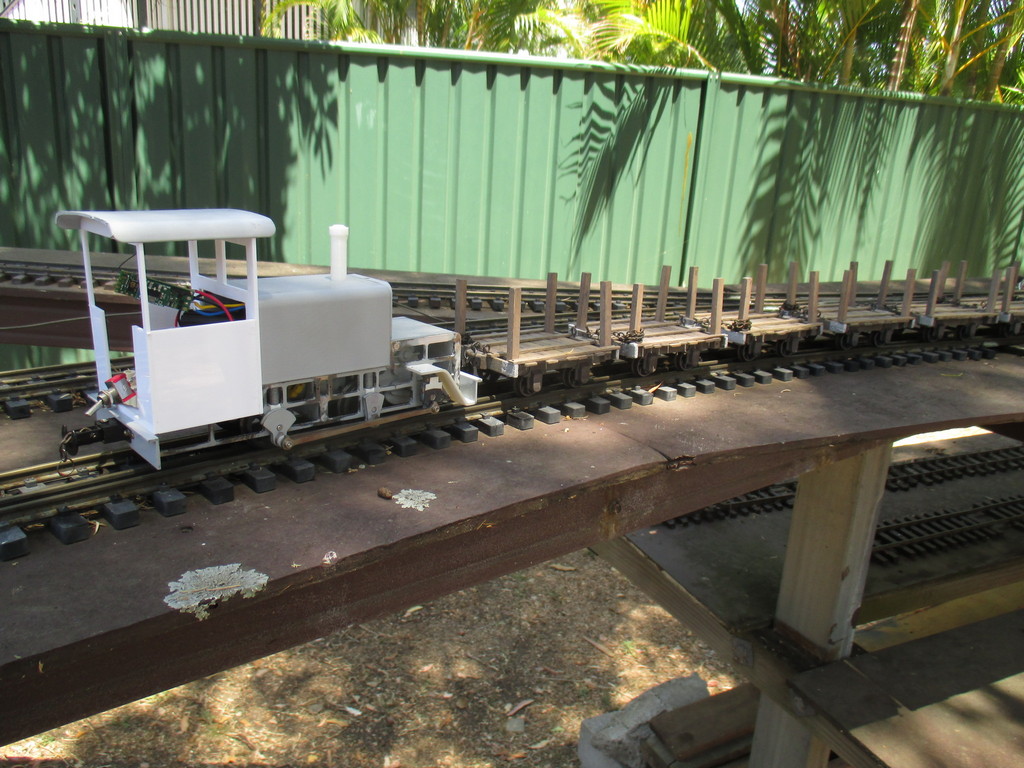 The cab was mocked-up with Blu-Tac, and a cutting disk in the dremel was used to cut a hole in the front panel, to allow the temporary wiring to pass into the cab. Whilst I'll keep the roof, the walls will be replaced with something fabricated from angle and sheet as-per the prototype.