A place for discussing battery-electric locomotives, whether they're diesel, steam or even electric outline
Post Reply
27 posts

Welcome to the parallel universe where British Railways seems to have been, in some strange way, metre gauge, or thereabouts... and where the Bulleid Leader was fabulously successful.

Here's the smaller, shorter derivative, the 'branchline' version, I guess. It's plasticard on LGB motorblocks and inaccurate in every detail and dimension - but you get the idea. The a-little-oversized chain cover thingies usefully hide the non-Bulleid wheels (and that there aren't actually enough of them). I’ve tested it and it goes round corners OK but I'm waiting for some better weather to tidy up the garden, clean the track and give it a proper go.

And then there's a cartoon scale, small pannier tank, on a Piko motorblock, constructed in much the same way, with additional white metal fittings. Not built to tow the Leader back to the shed as that won't be necessary.

Both have been built to run with modified LGB and GRS rolling stock. Scale is flexible.

Anybody else doing this sort of stuff? 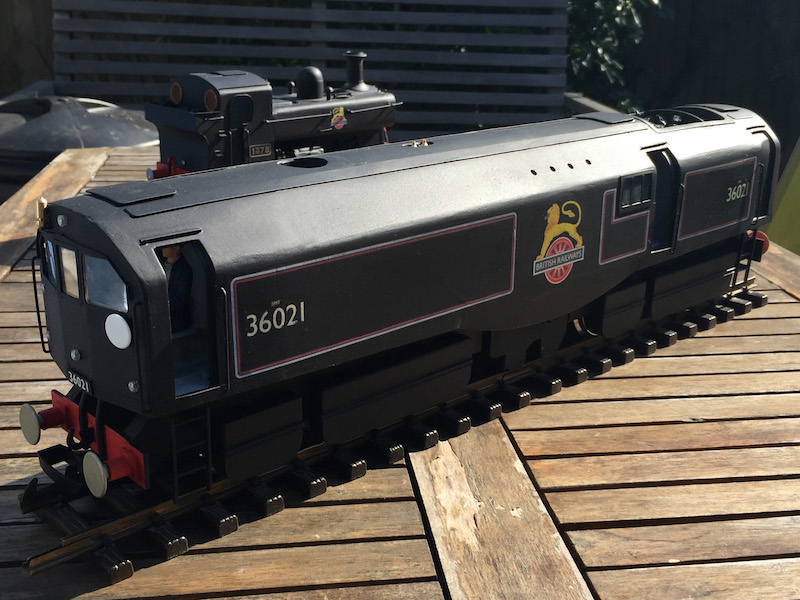 Just under 2ft, so rather shorter than original would be. Smoke will, soon I hope, come out of that hole in the top 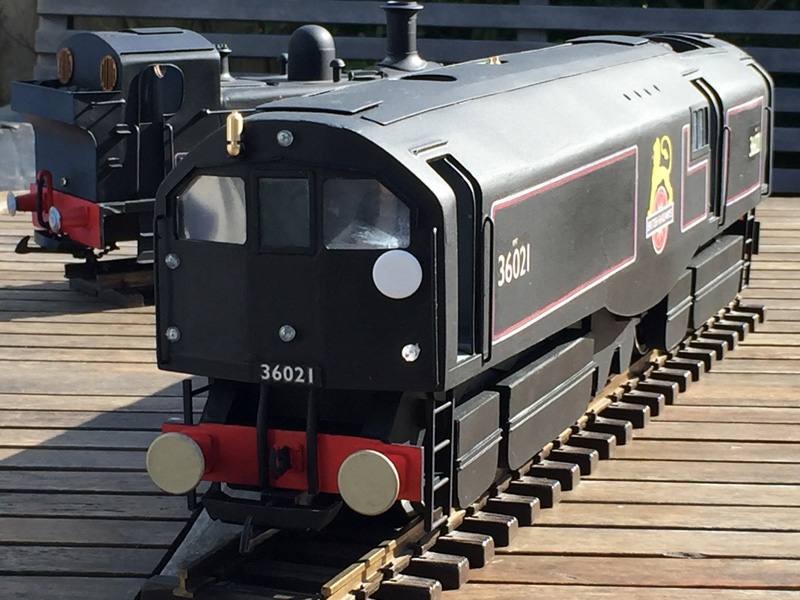 You should know never to use superglue near clear plastic 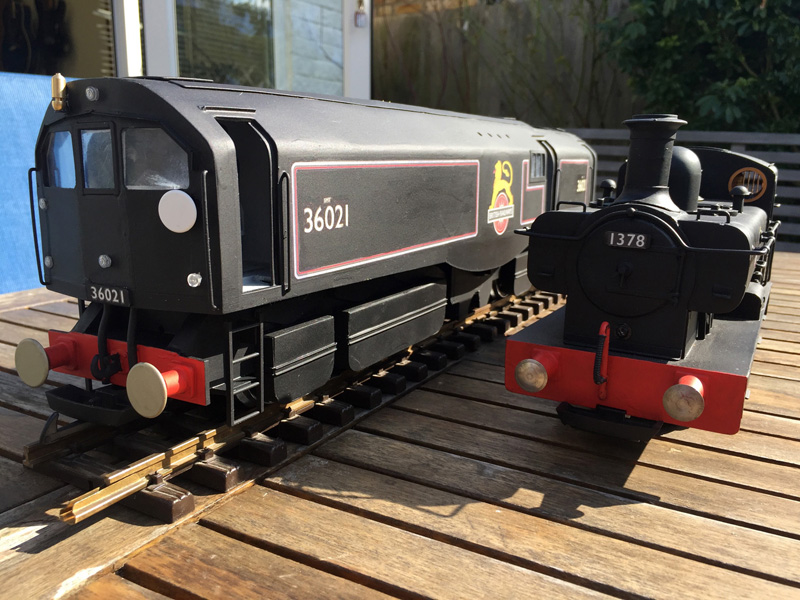 Eventually I ran out of ladder trying, unsuccessfully, to make them the right shape 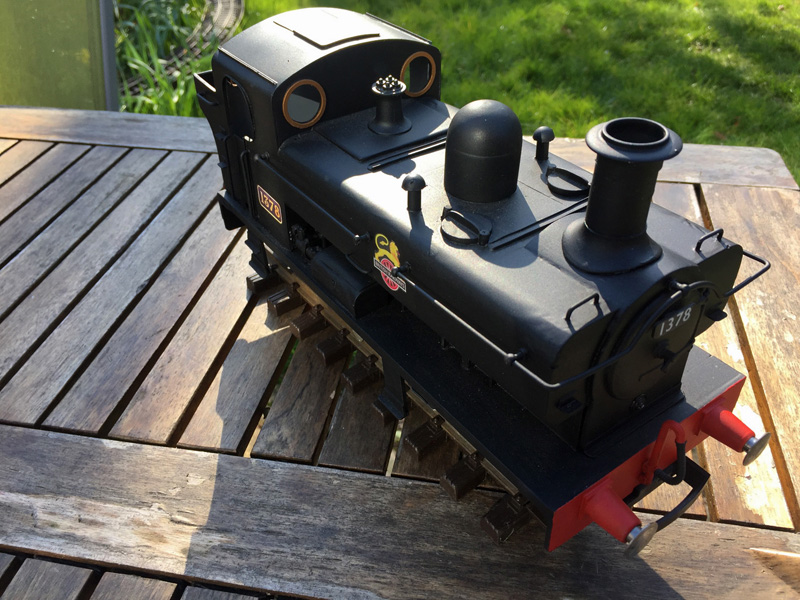 Tank engines should always have round cab windows! Guffy bits less obvious from a few yards and on the move, I reckon 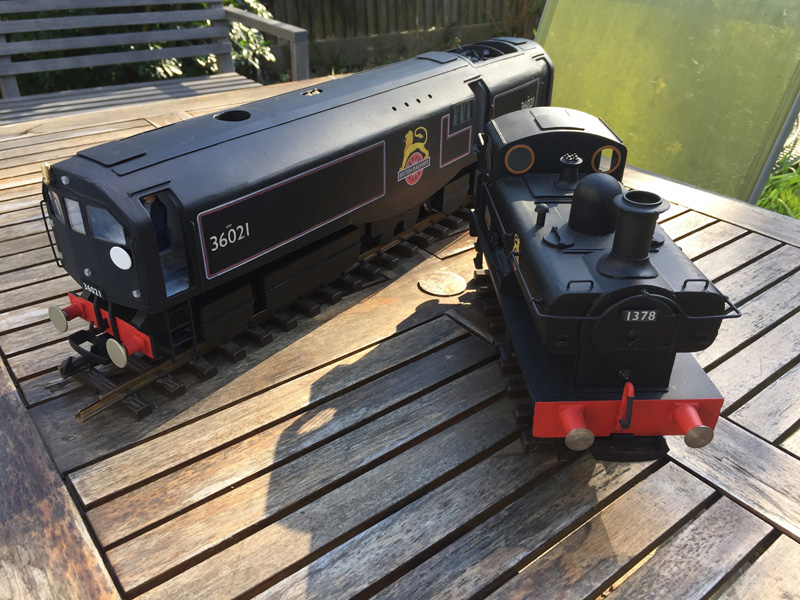 Despite this picture, their relative sizes don't look too bad. It's the rolling stock I worry about...

What a wonderful idea and well built too.... where are the rivet counters now?
The best things in life are free.... so why am I doing this?
Top

Delightful models. That's the beauty of scatchbuilding - you can build whatever takes your fancy in whatever scale feels right to you. I must also admit to having a somewhat rubberised scale ruler.

Cor these are great, where have you been hiding!

They look huge, are they larger than Gauge 3 locos as that always looks bigger than G scale on YouTube?
YouTube Channel
Top

Ho Ho. Thank you. Same size as G-scale (fortunately, as they use a lot of it) but to a different, inevitably elastic, scale - smaller than G3 (not that I've ever seen any). I have to cheat with the proportions because of available motorblocks, wheel sizes, track radius and so on. Gauge, I suppose, would work out to be a bit less than 4ft. Sometimes.
Last edited by BertieB on Sat Mar 24, 2018 12:05 am, edited 1 time in total.
BertieB
www.toytrainsinthebackgarden.co.uk
Top

Any videos of your locos running?
YouTube Channel
Top

Well BertieB, thank you for introducing me to a locomotive type that I knew nothing about. I've just read up on wikipedia, and it sounds like they were tough on the crew!
Fantastic modelling, and I'm looking forward to seeing more of your line and rolling stock.

Ooo-er. Well, there's a bright and chirpy video of the pannier tank but, rather dozily, the subject's often not sharp...

Another one with more, um, variety:

Both have G-scale stuff masquerading as BR, not always convincingly. But I suppose you can see how the notion evolved.

In fact it was a YouTube comment from tom_tom_go that alerted me to this forum. Ta.
Last edited by BertieB on Sun Mar 25, 2018 12:57 pm, edited 2 times in total.
BertieB
www.toytrainsinthebackgarden.co.uk
Top

I thought I recognised the Pannier tank!

The second video does not work?
YouTube Channel
Top

I also use a rubber ruler for scale - its whether it 'looks right' that matters and as someone very wise in Garden Railway'ing once said, its your railway, run what you bl**dy well like!
Where did I put that uncoupler?
Top

I have just subscribed to your youtube channel, please do keep us updated.

Your garden line reminds me very much of "classic" british garden railways where scale didn't matter nearly so much as atmosphere (like beckonscot).

There is also something of the isle of wight about it; how about a G scale terrier?.........
Top

I think you have a talent for this. Love what you are doing, the models and the videos. However, mixing post-war BR livery with pre-war syncopated musical stylings ? Preposterous !

Sorry I can't help the crotchet counter in me. Max
Top

Sorry I can't help the crotchet counter in me. Max