TVT - The Skylark That Couldn't

A place for discussing battery-electric locomotives, whether they're diesel, steam or even electric outline
Post Reply
25 posts 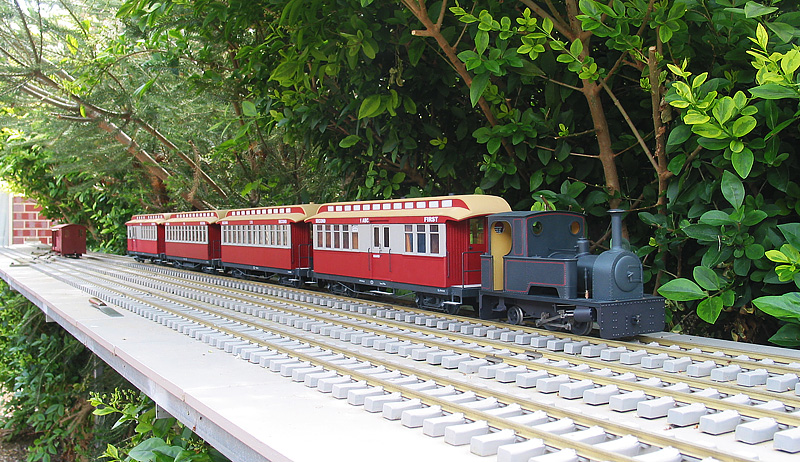 Don't know about the engine, but the trees sure have grown!
Grant.
Top

Seems to have plenty of puff, Graeme.....

I haven't tried it, but the drawbar pull measurements suggest it would be able to pull ten bogie wagons. Not having grades helps......

As mentioned above, between the local weather and other issues, I hadn't got around to load testing this loco since it entered service.

It's now officially summer here and having hacked the track out of the jungle in the backyard and poisoned the weeds, we finally got a nice day for a run. With a clear blue sky, no wind and a temperature around the 20C mark, I finally ran the first train since about Easter.

The Skylark has now passed it's load test with flying colours..........

The first photo shows it out on the mainline hauling 11 timber pairs (44 axles) off the bridge at about 15 smph. The speed remained constant on the curves and on a slight grade where the ground has subsided a bit during the recent very wet winter. 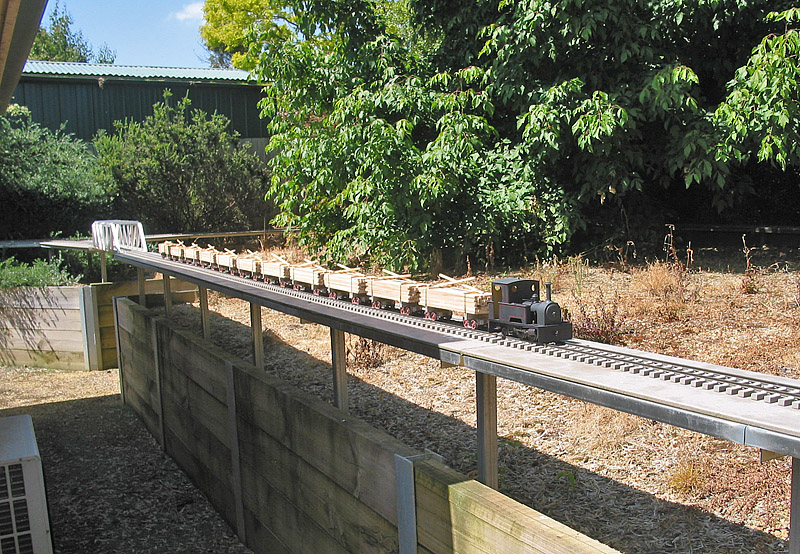 The second photo shows it pushing the train back into the yard through two s-bends at the end of the run. 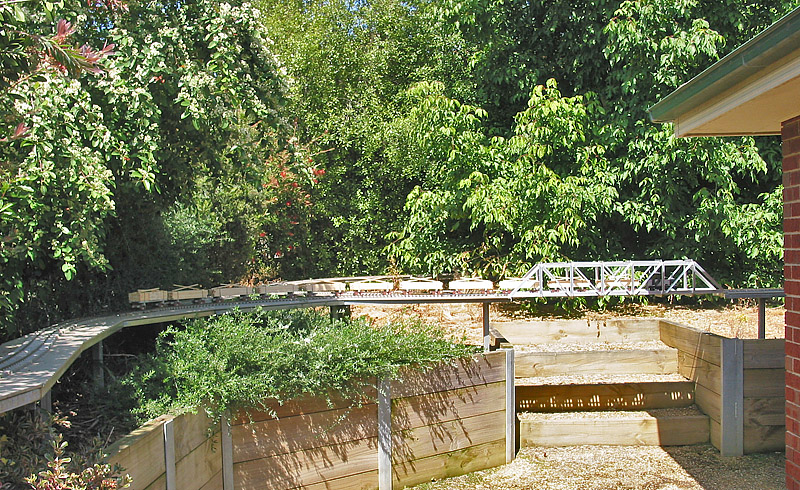 The loco weighs 1.8kg, with a drawbar pull of 400g. The train weighs about 5kg, but is free rolling with a rolling resistance of 180g, so well within the haulage power of the Skylark on straight track, but getting close to the limit on curves.

It should be pointed out that this is a ludicrous load for a Skylark on a Victorian timber tramway. When the prototype was at work on Russell's Tramway in the Dandenongs, it would have struggled with three loaded pairs.

Was going to say, that's an enormous load for a Skylark. I have found that setting back with log bogies is a good test, especially through S curves.
Grant.
Top

It's nice to see someone else with a passion (or is it a fetish) for measuring tractive effort etc. I measure all my locos after I finish building, for mass on drivers and drawbar pull. (and the electrical chracteristics as well). I'm interested that your adhesion comes in at 22% (0.4kg/1.8kg) - It's quite similar to the real thing.
I get similar values for most of my locos (21-39%) but never understand why the variation.
I then try and calculate what they will pull on my grades.

Drawbar pull is a function of the co-efficient of friction which varies depending on which pair of metals are used for wheels and rails. Mine usually come out in the range 0.20 - 0.25. I use brass rail and turn my own wheelsets, mostly from mild steel.

I've found that the wheel profile has an effect on tractive effort and rolling resistance and I now use parallel treads on loco drivers, but still cone the rollingstock wheel treads. Surface roughness of the wheel tread also has an effect, as does surface oxidation, especially on brass rail.

Commercial mechs nowadays have a bad habit of using plated drivers. They may stay cleaner for track pickup, but are a bit slippy dippy for my taste, as are plastic wheels when used for driving wheels. Traction tyres are an invention of the devil........

The timber pairs that I use to test timber tram locos roll like bricks........... The axle bearings are as crude as the ones used on full size timber tram bogies and hard to keep lubricated. The wheels are plastic and roll fairly freely on straight track, but the wheelsets don't have a free wheel, so the rolling resistance is higher on curves.

My normal bogie rolling stock have better bearings and I've made the steel wheelsets with one free wheel, so they roll the same on a curve as they do on a straight. The rolling resistance of my test set of bogie wagons is only 100g for a 6kg train.

My track is more or less flat, so I don't normally need to calculate loads on grades.