A place for discussing battery-electric locomotives, whether they're diesel, steam or even electric outline
Post Reply
8 posts • Page 1 of 1

This is another lockdown project which was started about a year ago and then sat as a working chassis until the weather got hot again.

Frank Ezard owned a timber mill and tramway in the Erica district in the '30s that connected to a siding on the old VR narrow gauge line to Walhalla at a place known as O'Shea & Bennett's Siding. As well as a Days geared steam loco., the tramway used rail tractors and a collection of rail motors. This model is based on one of those rail motors that was converted from an old Morris Cowley delivery van.

The model design is based on my recent rail motor models, especially the rail ambulance. https://gardenrails.org/viewtopic.php?f=37&t=12927

Traction power is provided by a Pololu 6V 50:1 micro metal gearmotor (a #998), with a mitre gear final drive in a milled brass gearbox and Eneloop long life NiMH batteries. As usual on my small rail motors there is no speed control, just a reversing switch, an on/off switch and a charging socket. Bodywork is in polystyrene sheet and strip.

The first pic shows the working chassis about a year ago. The main difference between this chassis and the one under the rail ambulance is that this one is fitted with a leading bogie. It was given a test run on the track, found to be a bit fast and the number of battery cells reduced to three, to bring the speed down to about 20 smph. ....... and there it sat until a few weeks ago, while I moved onto other projects. 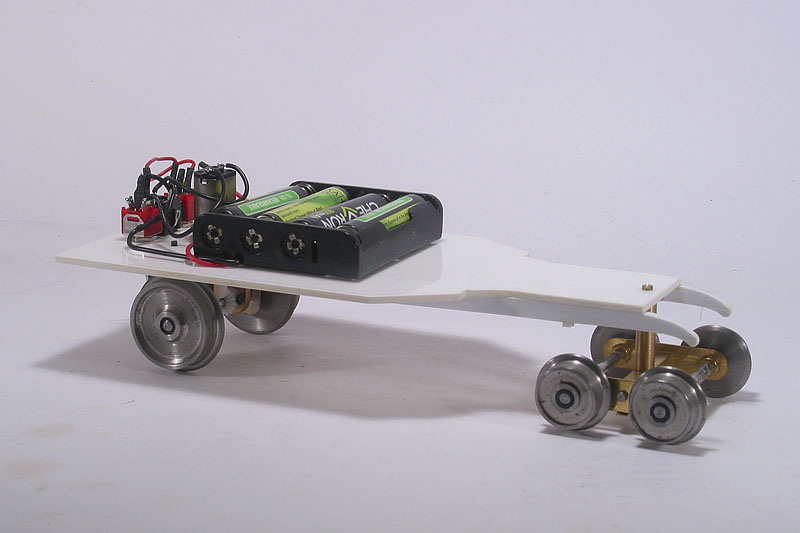 When work restarted, the first job was to finish the chassis detail and fabricate the radiator, bonnet, scuttle and windscreen unit and fit that to the chassis. 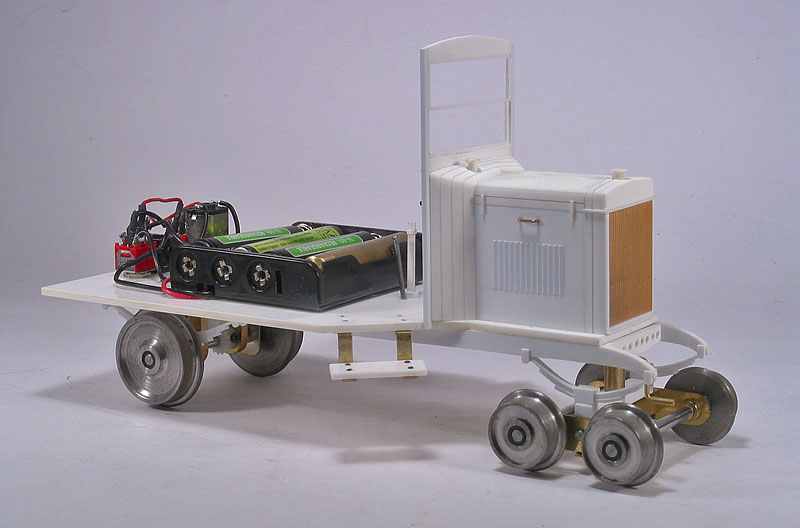 Next job was the van body. None of the surviving photos show the interior of the body, so this is based on the cabs of restored Morris Commercial trucks of the period, less the leather upholstery and carpets most of the restorations have. Unlikely on a depression era timber tram, where any upholstery would have been a folded chaff bag......... 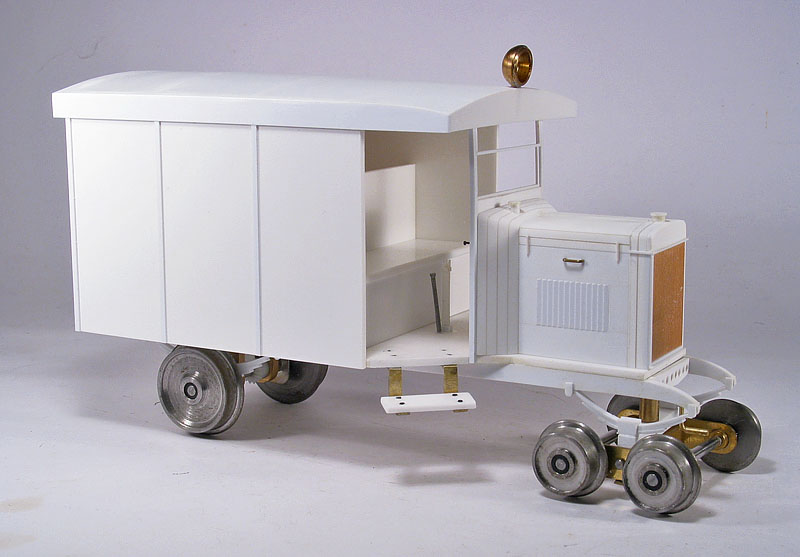 Then it was on to the paintshop and the usual fight with modern paints, not helped by the weather we have been having. The only tin of paint that co-operated was a 30 yr. old tin of Humbrol used on the interior. The next photo shows the final result sitting on the track in the sun earlier today. 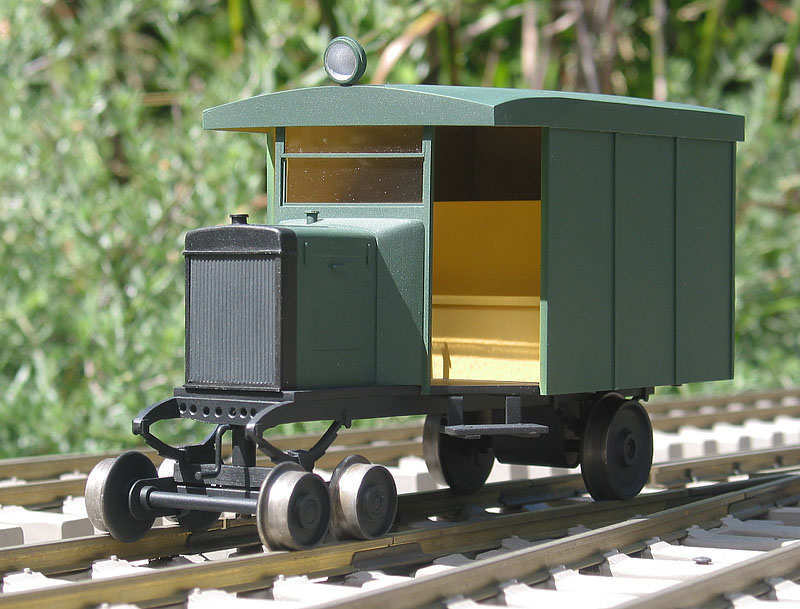 The last photo shows the rail van in the transfer yard with the TVT engineer for scale and the Kerr-Stuart Skylark from the other timber tram in the background. This thing is tiny and should probably be renamed a stealth van, as it more or disappears against the green background out on the track. 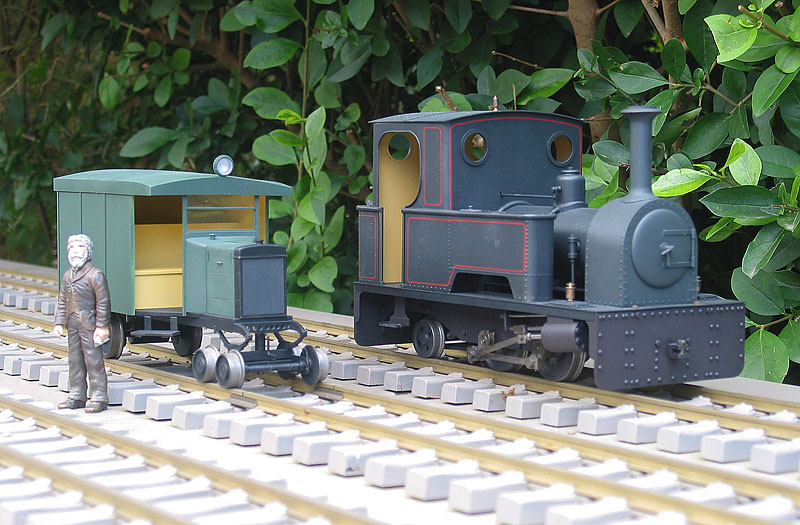 A little beauty there Graeme, it looks simple but I can appreciate the work put into such a mini-masterpiece.
The best things in life are free.... so why am I doing this?
Top

That Rik gets everywhere!

That is one beautifully ugly vehicle! I reckon it would give my Contractors Loco a run for it's money in the ugly stakes.

Another modelling masterpiece, Graeme.
Who knows, the Bennett in question might have been a long lost relative. My family did get about a bit but, given our history, it's more likely to have been a pardoned deportee than one of the landed gentry .....

Some lovely scratch building there Graeme. A charming addition to a period railway.
Phil

Those front wheels look so typically timber tram with their tread width, I suppose exaggerated by their small diameter. So where's the hessian bag?
Grant.
Top

philipy wrote: ↑
Thu Feb 10, 2022 1:25 pm
That is one beautifully ugly vehicle! I reckon it would give my Contractors Loco a run for it's money in the ugly stakes.

From the well known 'bush engineering' school of design. It looks angry about something...........

The small diameter of the bogie wheels helps, but all the wheels are wider than I normally use, to give the look of wheels that were made to run on wooden rails.

The model wheels are 7mm wide instead of my usual 1/4" and the treads are parallel instead of coned. Makes no difference to the running on plain track, but stops the wheel dropping into the flangeway at v-crossings.