After a number of people have asked if these will be available to other people, I've decided to start producing a series of kits for the 16mm Market based on the stock of the Sittingbourne and Kemsley Light Railway/Bowaters Paper Railway under a completely different identity 'Bowaters Models'.

After a period of research, I've decided to make available a small selection of the various items of rolling stock that were used on the line all based around the standard 10/14Ton Pulp Wagons from various builders. All of them will feature multimedia construction with the goal being to produce accurate kits that people with very little 16mm kit building experience could assemble with relative ease. The current plan is to produce the kits to order with a short delay between order and delivery (ideally no more than 14 days).

The initial designs are for 5 Wagon Variants (1 Flat wagon, 3 10 Ton Wagons and 1 14 Ton Wagon) and all 3 different Staff Coach Conversion variants (Coaches 641 and 657-660). All of them have been drawn up with prototype kits made for the 14 Ton Butterley Build Plup Wagon and one of the Staff Coach conversions (Coach 641). I've also drawn up a version for Coach 641 as running today for a Proof of Concept so I could work out what worked and what didn't design wise. Bogies are all by IP Engineering with Accucraft Chopper Couplings. 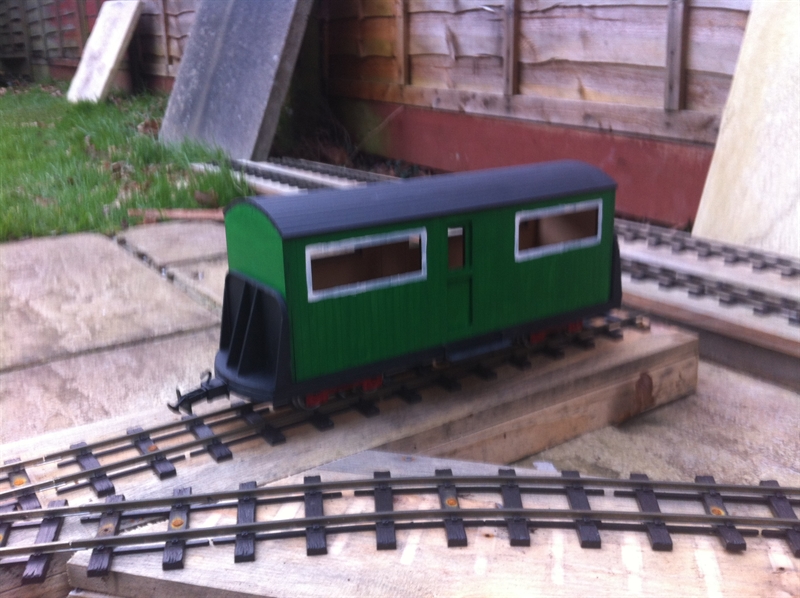 Coach 641 as Running today aka the Proof of Concept. Known problems with the Headstocks as designed meant they were 20mm too short making it look shorter than it should have been 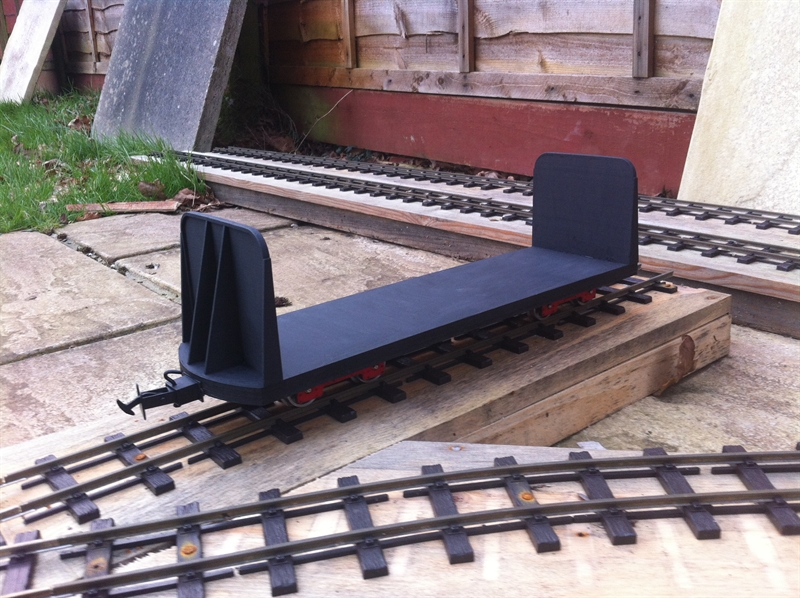 The Prototype for the 14 Ton Pulp Wagons built by Butterley. Etches have been drawn up to overlay the sides, provide Numberplates and to add locating sections for side stakes. 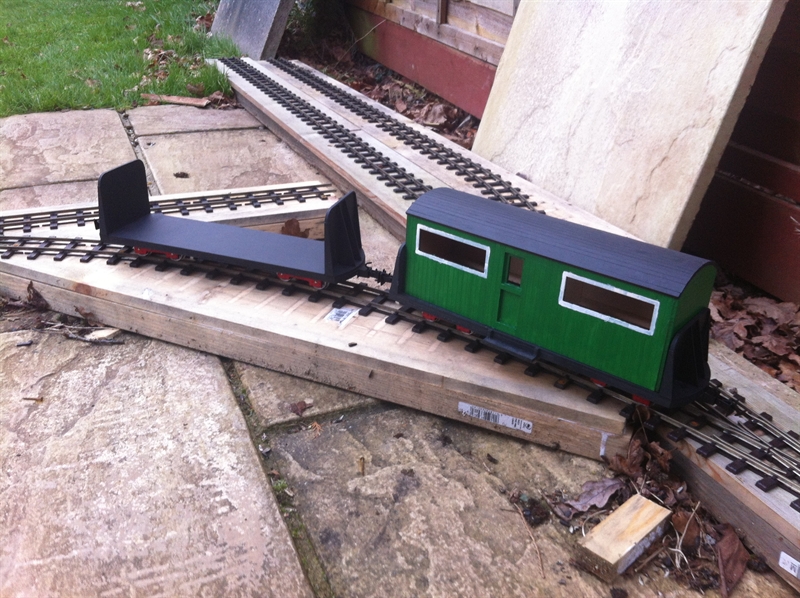 The Proof of Concept and first Pulp Wagon prototype shown together on my Garden Railway during Coupling trials which ended in success! 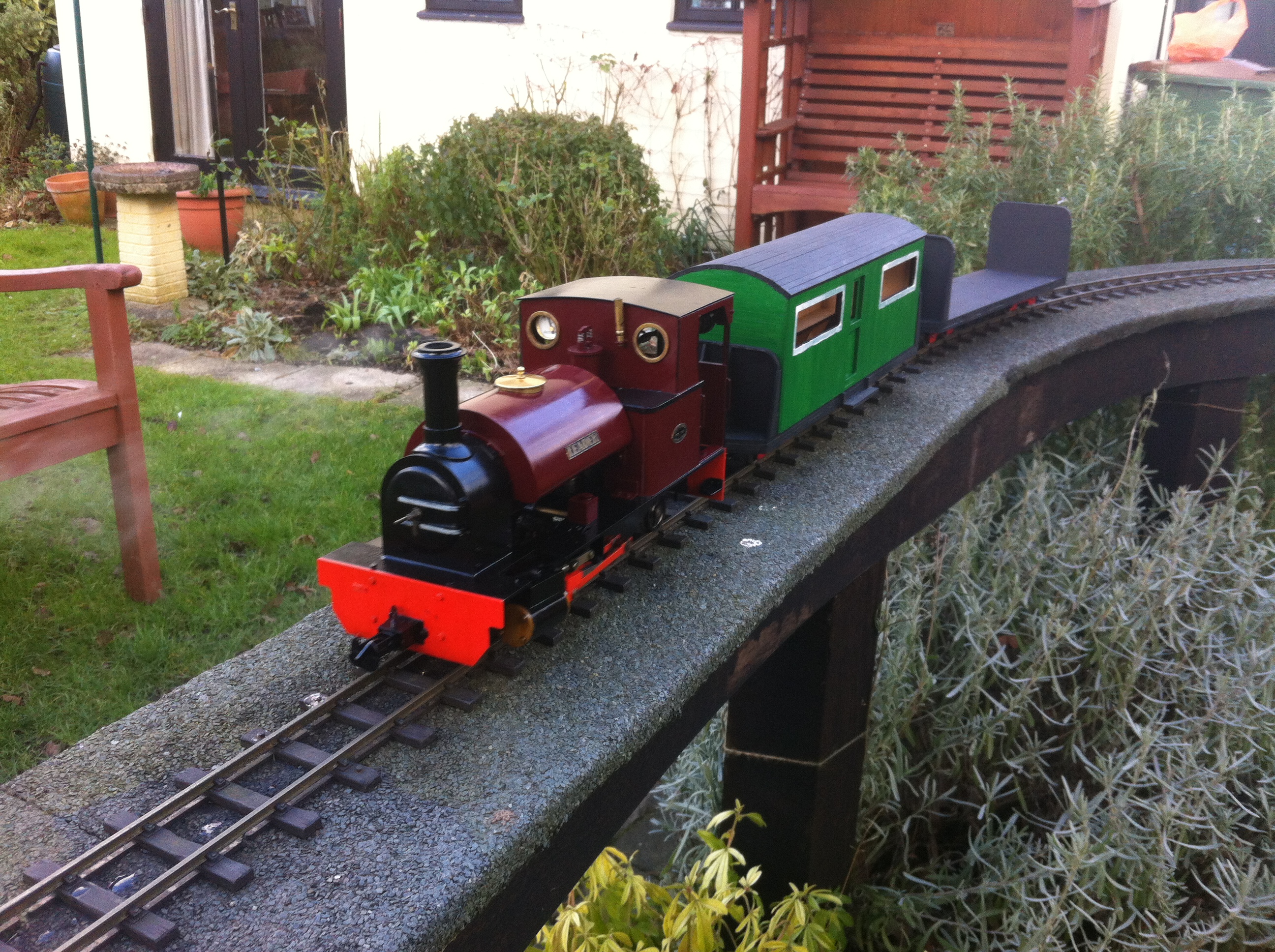 Both Wagons shown at work behind one of my Engines at a friend's railway for the first time. 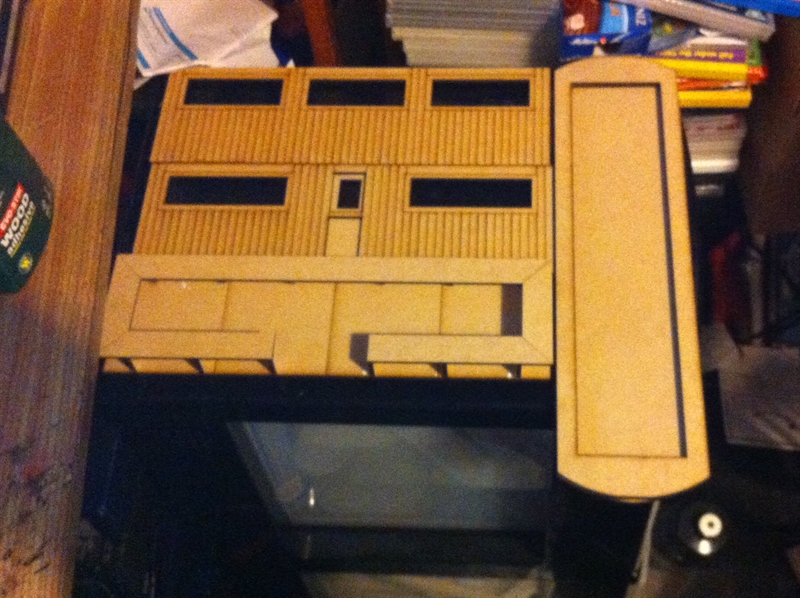 Hopefully I'll have some more news in the coming weeks as things progress.

How much will you be charging? as i may be interested in the coach kit
Steam is highly under rated
Top

I'll be watching this one! Looking forward to seeing what you come up with

No one expects the SPANISH ACQUISITION!!!
Top

Thanks Gents, with regards to pricing, the current estimates are the following. Only take them with a pinch of salt as they may change in the near future.

At the moment, that doesn't include Couplings (unlikely to be included) or Bogies (Working on it).

Well here's a little update, I've received the latest cuts for the new Wooden Bodied Pulp wagons along with the test cut for Coach 641 as built (which is the kit variant). All went together very well and was a great clean cut. 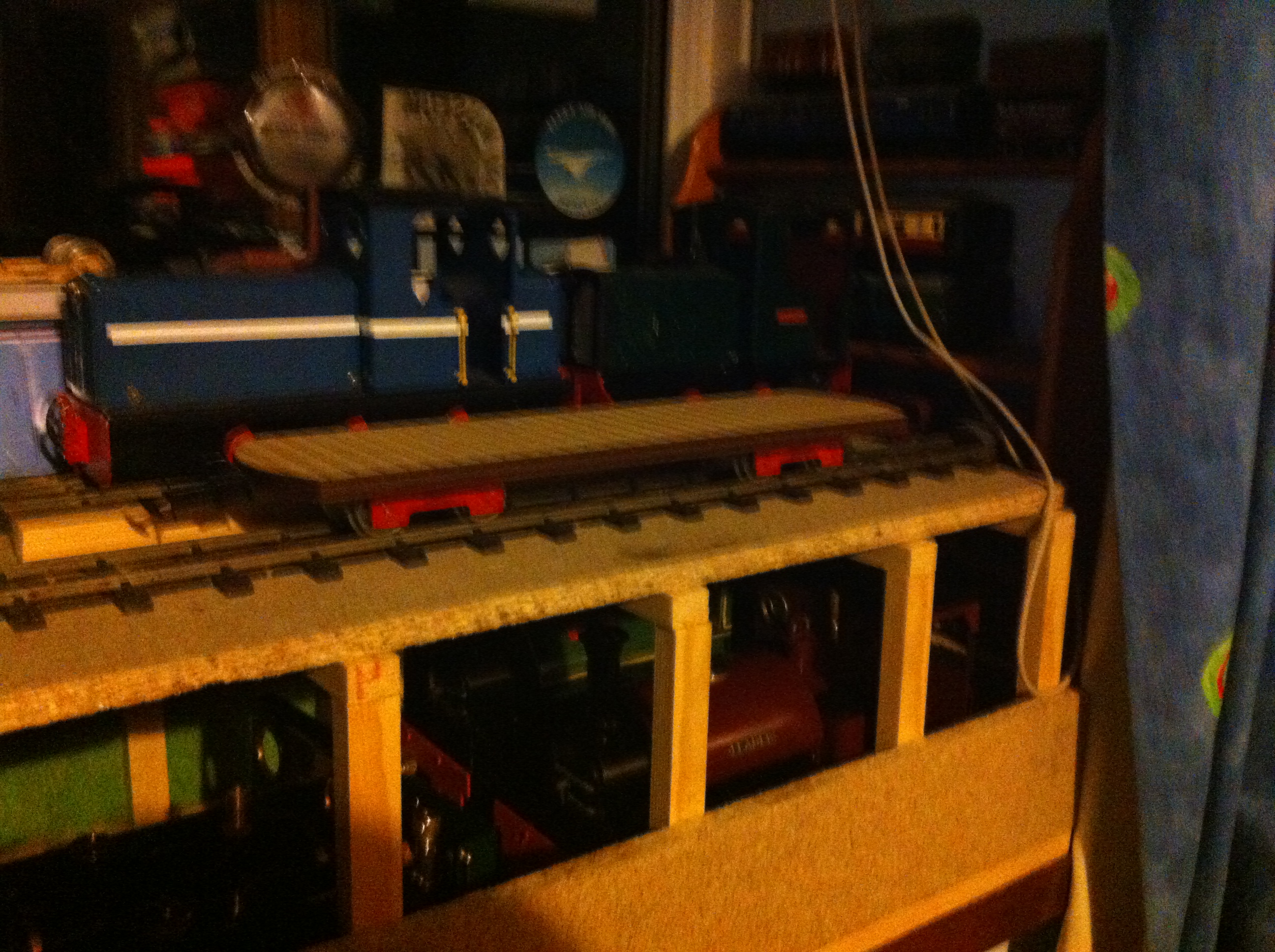 Here's the 10 ton Flat Wagon kit. Ironically, it will be cheapest kit in the range because of the lack of headstocks (which seem to double the cost annoyingly). 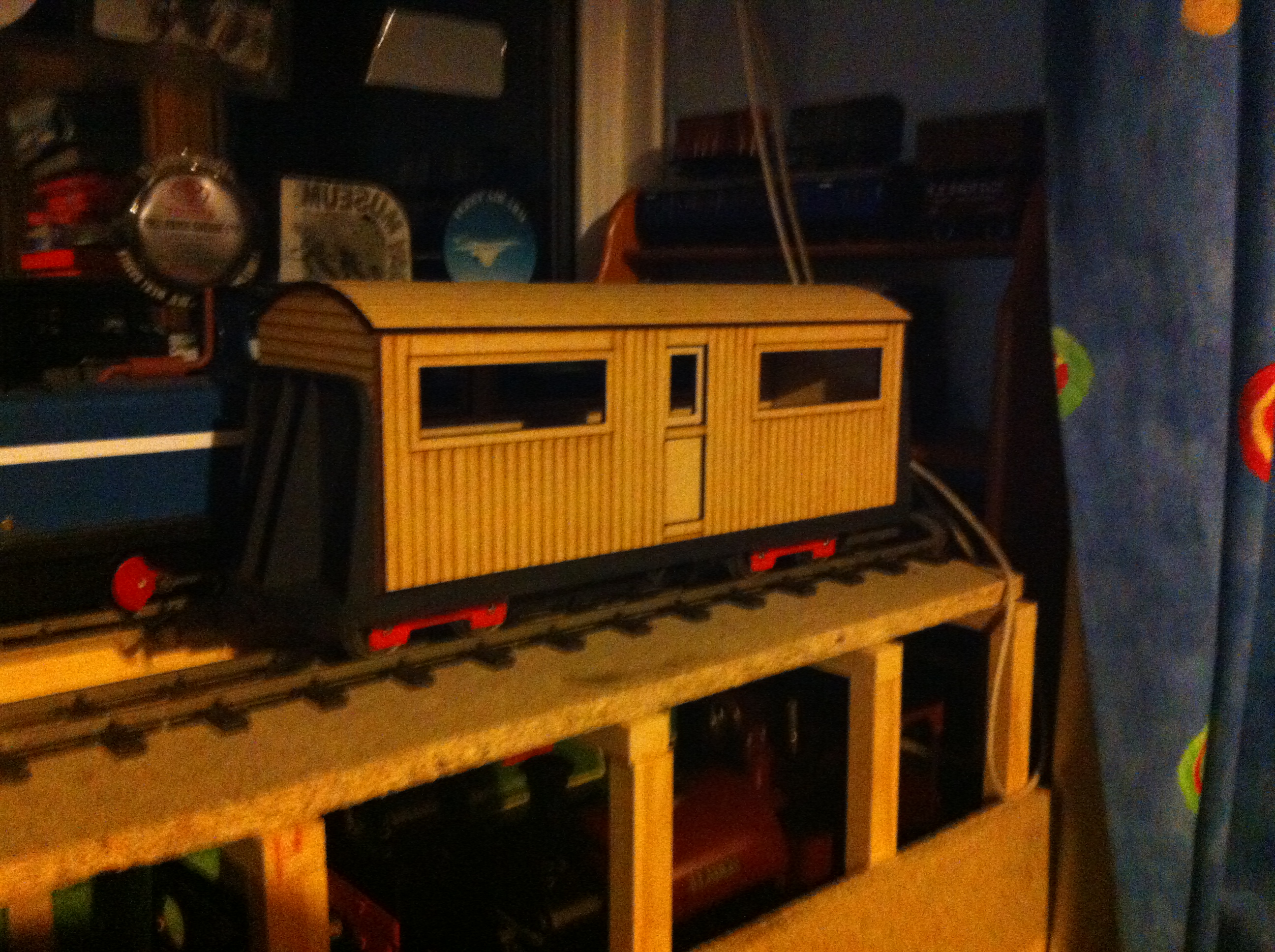 Here's the version of Coach 641 that's likely to be released. The 1st Picture shows the side with a door on and the 2nd shows the side without it. There are some changes that need to be made before release but the overall design is now proven which is all good from my perspective.

I've also got a website for it all which can be found here:- http://bowatersmodels.x10host.com/

It also shows what I'm hoping to make available at first plus there's a fair bit that's sitting on my ideas list that may make an appearence as well.....

After some more development work, I've been able to finish off a small number of other wagons. I'm happy with them and as such I'm aiming to get the majority of them ready for release around the end of March/Beginning of April. I'm planning to get the various kits produced in mixed batches of about 5 kits with a maximum wait of about 6 weeks. I've also been able to finalize the costs involved.

The first kits available should be the 4 Wooden Bodied wagons. Then hopefully followed by the 14 ton Butterley Wagon. I'm still sorting out a place where the kits will be orderable from but hopefully it won't be too long before that's all ready. Until then, if people definitely want to make sure any kits they want will be in the first batch, PM me on here and I'll be able to give more details.

After some interesting discussions, I'm pleased to announce that the entire range of Bowaters Models kits will be available to order from both our own website and though the well known 16mm etched nameplate providers 'Narrow Planet'.

At the moment, its planned the Earlier Pulp wagons will be available first followed by the 14 Ton all steel variants. There's been a number of faults brought to my attention with regards to the coaches so there will be a short wait while they are sorted out accordingly

Gents, after some further tweaking I'm pleased to announce that the first items in the Bowaters Model Range has now been released on our website. The following kits have been released with paypal payment now available:-

Brand new today, we’ve released our 3 kits which cover the original Staff Coaches from the former Bowaters Paper Railway. These now see active use on the SKLR today in passenger service. We’ve covered all 3 different designs which are as follows:-

All 3 are available with options for 3D printed Headstocks and Wooden Headstocks from today (11/06/15) from both ourselves and our friends at Narrow Planet. The images above show two of the prototypes which are different to the production kits. To have a look for yourself, go to:- http://www.bowatersmodels.co.uk/sklrstaffcoaches/

We've also updated the website to show the full list of our 16mm Bowaters Themed Loco sets which have been produced exclusively for us by Narrow Planet. Initially, there are sets for the Locomotives 'Premier', 'Leader', 'Excelsior' (see the below image) and 'Superior' available from stock with other Bowaters Engines available on request. 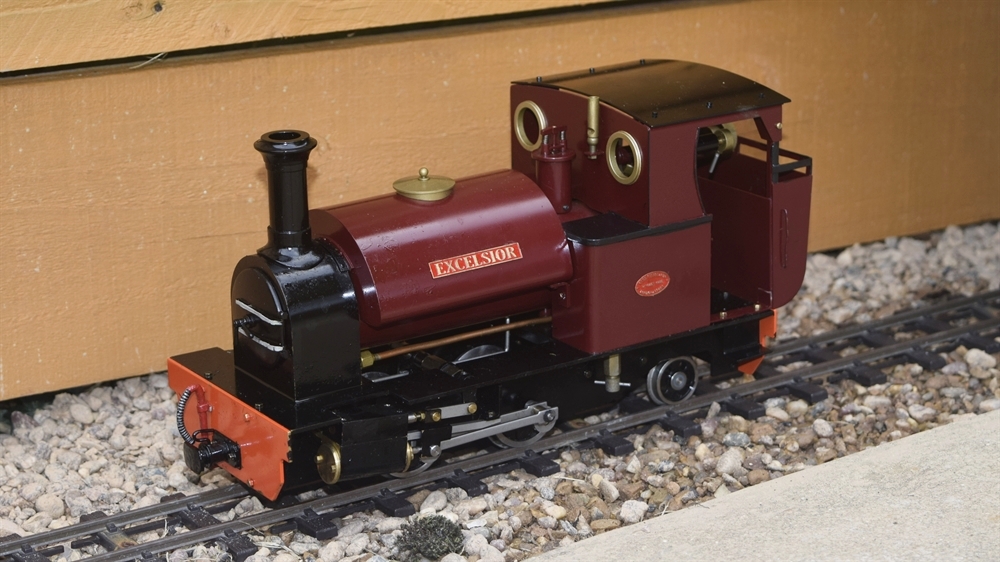 Any progress on the Chattenden and Upnor coaches?
Chris Auckland
Top

They're still in the works. They're complete at a CAD level but are awaiting a test cut and assembly. I'm aiming to get them released around the middle of the year.

Bowaters Models are pleased to announce that we're working on a range of Ffestiniog Railways Coaches. The initial range will cover the following coaches:-

Details are still being fleshed out and pricing is unconfirmed. The current plan is they will use bogies that can be built as either 32mm or 45mm. The minimum radius is looking at being 5-6ft although that may change when I have a prototype to test which should be with me in a few weeks.

The kits will follow the Bowaters Models principle of being easy to assemble. The recommended couplings will be the superb Accucraft Chopper couplings, the same as the Sittingbourne and Kemsley Railway Stock.

We're aiming to have the first prototype (possibly Prototypes depending on how long it takes to receive the first cuts) with us at Narrow Gauge South at Sparsholt in Winchester this April.

Just a quick message to say we are still alive and things are progressing. We're looking at Prototyping the SKLR Chattenden and Upnor Coaches shortly along with the first of our FR Coaches. Design work is complete on the majority of our upcoming products (except one which is still giving us headaches). See our website for more information!

Well, as anyone who went to Peterborough will now, we released a couple of kits and we're now taking orders for the others. So to update you on our current projects, here's a little post.

The 5 FR Coaches are all progressing well. We're now in a position to start accepting orders for all 5 variants. We've formally released the first two with approximate release dates for the others. 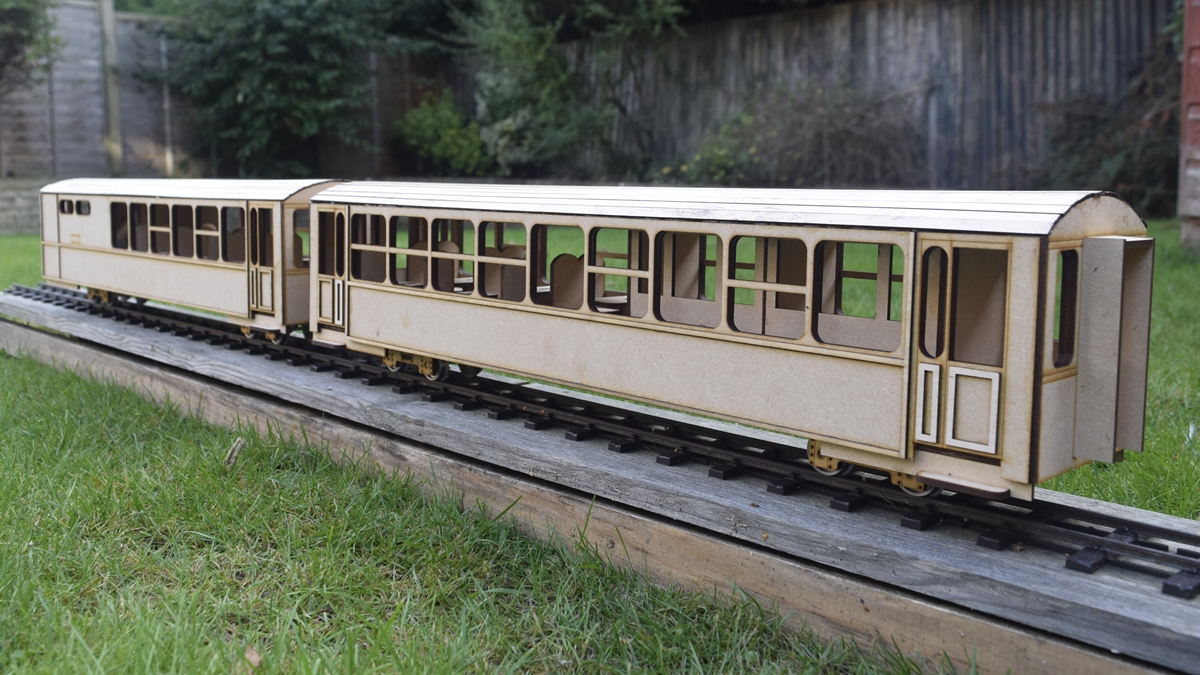 Ffestiniog Railway Coaches 112 and 114. First images of Coach 105 are expected tail end of this week.

The 3 C&U Coaches are all at the same stage they were at a few months ago. The first two are drawn up and awaiting checking before sending off for Prototypes. This is dependent on time/finances but we're hoping they'll surface the last quarter of this year.

Screenshot out of our CAD software showing 196's side pieces

Our range of Bowaters has stayed fairly consistent throughout the year although we are planning some additions over time. Mainly adding a third Preservation Era coach to the range along with a Pulp wagon Coal Conversion. Both projects are progressing well with research being undertaken on both at the present time. We're also working on our own Locomotive kit appropiately based on the Bowaters Battery Electric 'The Tank'. Its being sized around a IP Engineering chassis at first and we might explore our own at a later date. 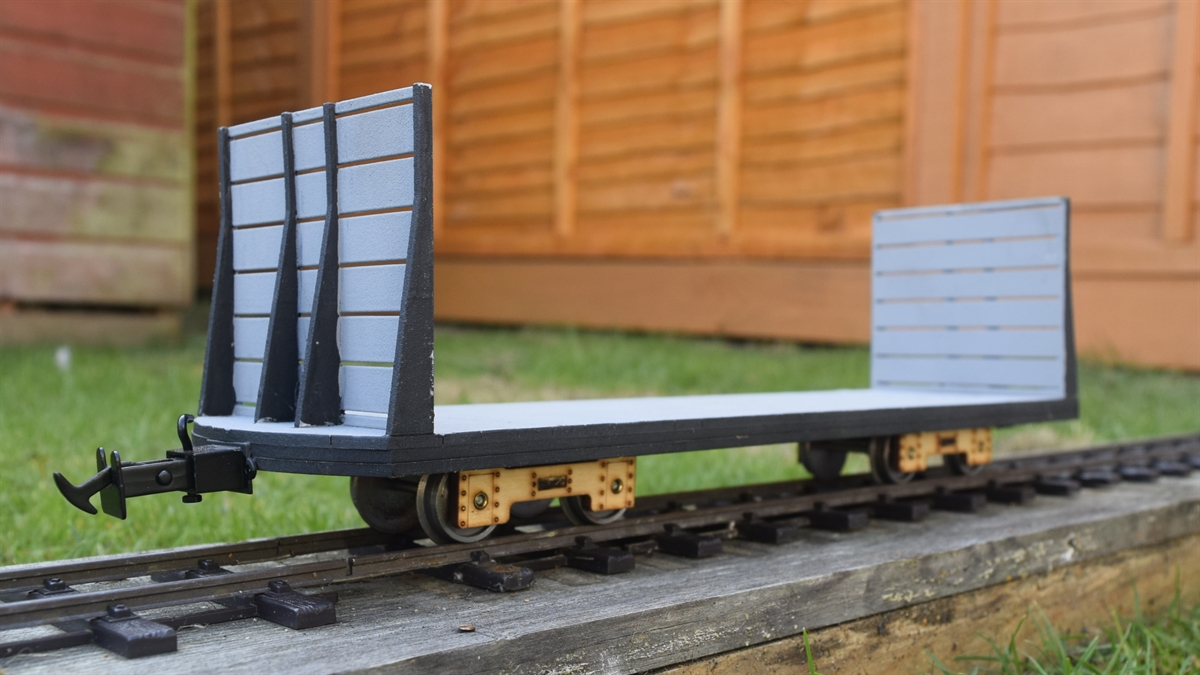 One of our current Bowaters range

At the moment, this is a project that's very much a wait and see. We might progress with this one, we might not. The plan is to cover the 4 ex-Phillips and Rangeley Coaches built with the Domed Roofs with potenially others to follow later. We're still doing our research into these at the moment as well as working out the potenial demand. These will be long coaches (at 46 scale feet (736mm)) although they should look good with the Sandy River and Rangeley Lakes engines from both LGB and Roundhouse. We are aware of the upcoming 7/8ths scale Sandy River Forney from Accucraft however we are not planning to produce any kits to run with the engine just yet. If you are interested in either a 16mm version or a potenial 7/8ths scale (Warning, these kits will be absolutely massive at over 1m long each in 7/8ths), please get in touch!

Image of one of the prototype coaches preserved today in Maine. Image from wikipedia:- https://en.wikipedia.org/wiki/Maine_Nar ... oad_Museum

We've just come back from our first Peterborough and loved every second of it. We're hopefully looking into coming back next year alongside Narrow Planet once again although this will be commitment/diaries depending. We've only got one other show this year which is ExpoNG in October down in Kent. Once that show is out of the way, we're looking at our 2018 diary and starting to pencil one or two shows in already of which Peterborough is one of them.