Some of you may recall that I created a new siding at Bulkeley Station for another lineside industry. After some deliberation, I decided it would house a boneworks. One actually existed in the area near my railway and so I felt its existence on the line could be justified. I'm not sure I've ever seen a boneworks modelled in any scale and so I quite like the idea of having something a bit different.

There are no clear images of the boneworks near here apart from this photo taken from the top of the brickworks chimney adjacent to the boneworks (Beeston Castle is in the mound in the background and the tower of Peckforton Castle is just visible on the hill to its right). 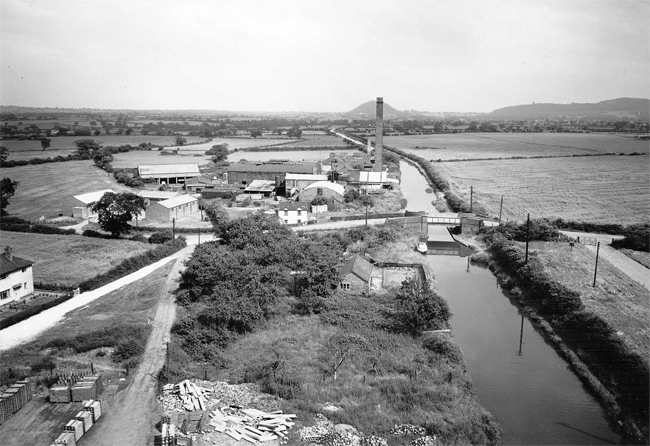 .
As you can see, it seemed to have comprised a series of large corrugated iron sheds.

I did a bit of investigating and discovered there was a bone and flint mill in Stoke on Trent which is actually still in existence as a museum. The building looks far more interesting than our local boneworks and so I decided to transplant it (or something similar to it) at Bulkeley. 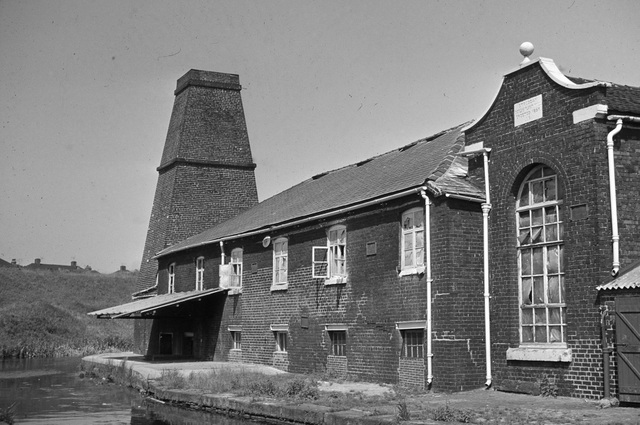 The first job was to survey the site at Bulkeley station where it would be located, to figure out what sort of space I'd have. 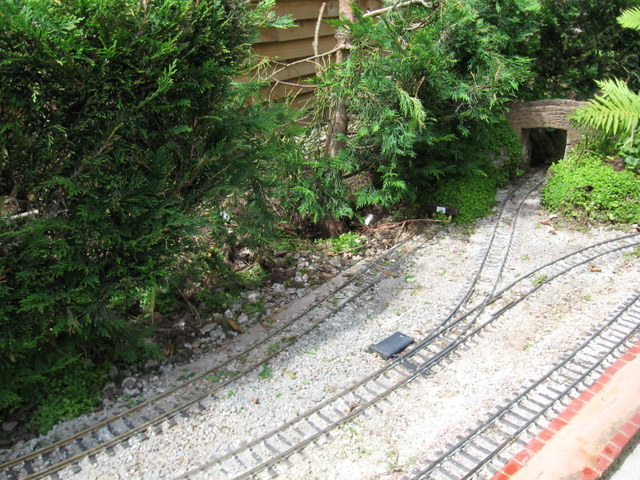 .
I reckoned I could squeeze in a building about a metre long by around 30cm deep. It would be modelled in relief, as I did with the brewery.

So, I cleared the area and dig a shallow trench for the building foundations. 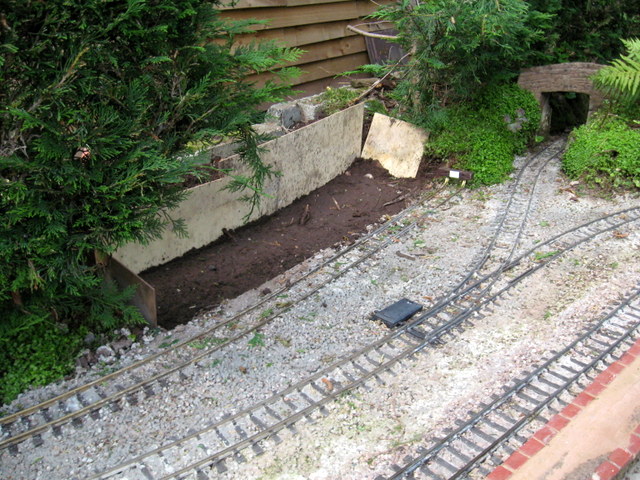 .
This was half-filled with rubble and shuttering placed around. I used the same shuttering for the platform edge as I used for the loading bank - waste-not ...! 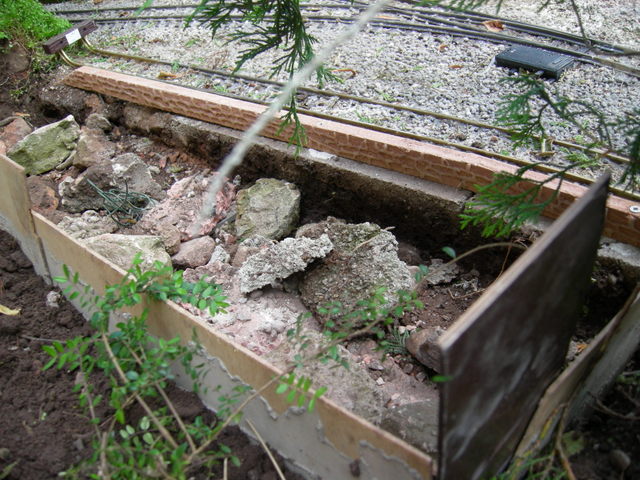 .
A 3:1 mix of sand and cement (plus some concrete dye) was trowelled-in, smoothed off and left to set. 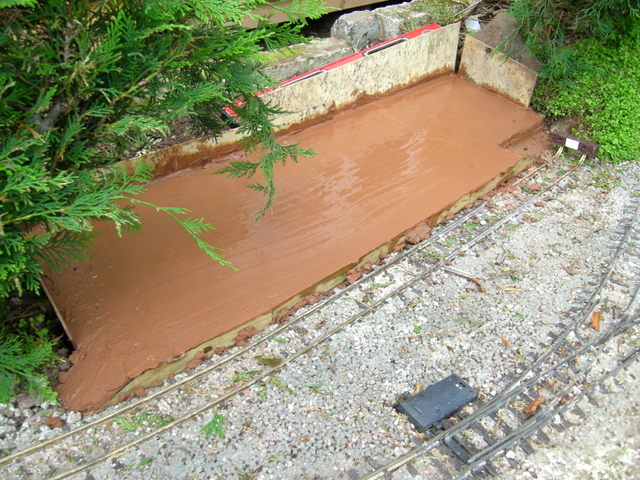 Meanwhile, I sent off for some PVC foamboard and tried drawing some window-frames on SketchUp.

The Sketchup frames looked fine on the screen, ...... 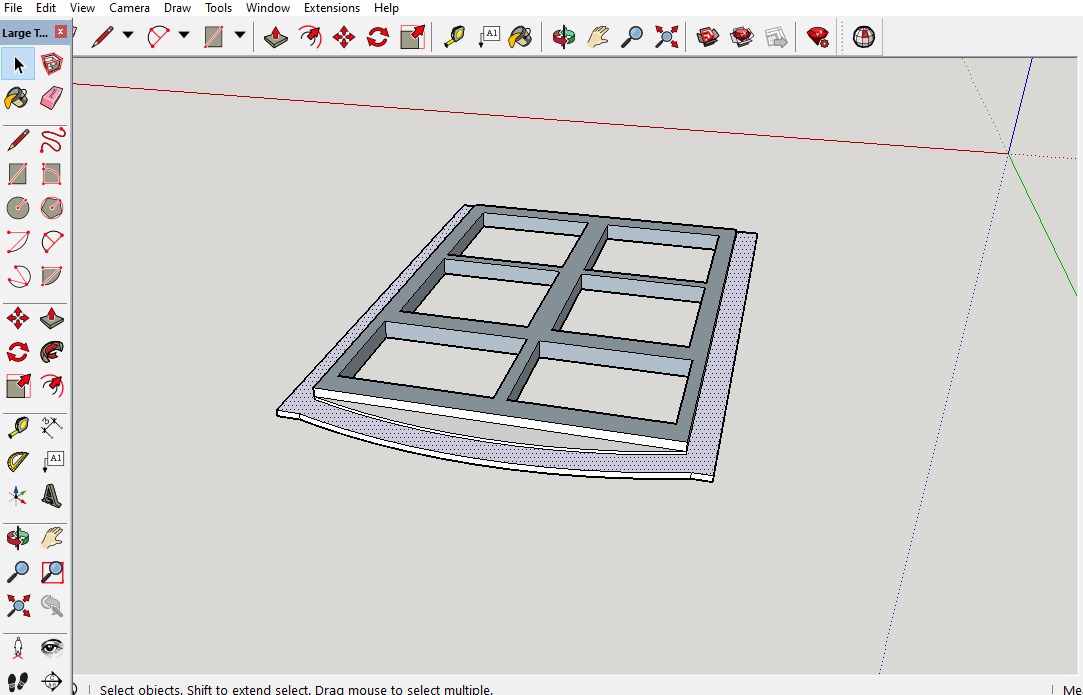 .
....... but no matter how hard I tried, I just couldn't get them to load successfully into my slicer software (Cura). Cura complained they were unprintable as they weren't manifold (which means there were holes in the drawing). I tried various methods are repairing the drawings but all to no avail.

In the end, I consulted Google and discovered a great little online 3D package called TinkerCAD. The problem with SketchUp seems to be that, although it is an extremely powerful and versatile program for producing 3D drawings, it was developed before 3D printers became available and hence its drawings are not really appropriate for 3D printing (unless there are some techniques or tools of which I am unaware). TinkerCAD is designed specifically for making drawings for 3D printers and so, after a bit of "tinkering" I produced the drawings for the three types of window needed. 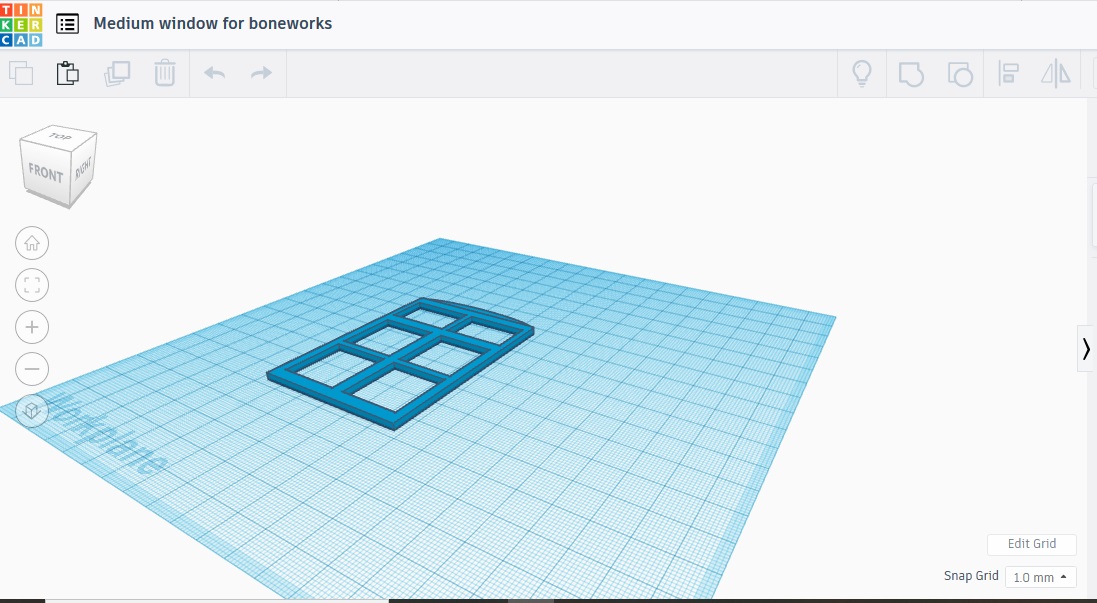 .
The large (6' x 12') window for the engine room (which incidentally contained a Watt beam engine), had to be split as it was too large for the printer bed.

.
The drawings imported into Cura and were sliced with no problems!!

TinkerCAD is actually designed (by AutoDesk) to be used by teachers with children and hence it is quite easy to use. It does mean it has limitations but I found the drawing environment to be quite intuitive and the learning curve a heck of a lot less steep than SketchUp - though, of course, a number of the concepts and techniques are transferable.

Update on today's progress
I have finished printing out the widows. 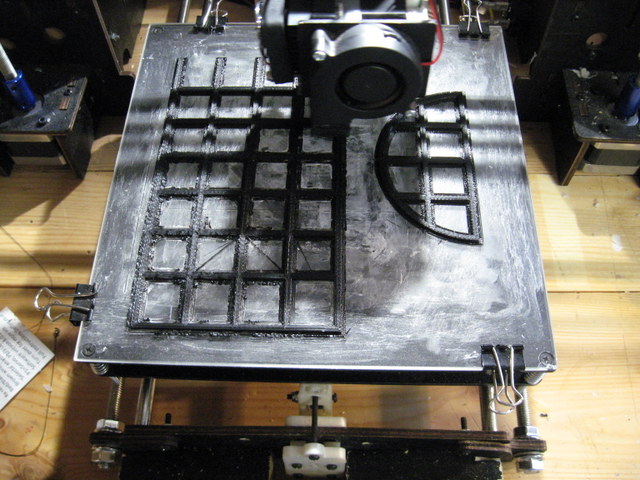 .
Because I have a very cheap printer (or maybe I'm just no good at setting it up properly), I have to do a fair bit of cleaning-up after printing. But the windows do seem to have turned out OK. 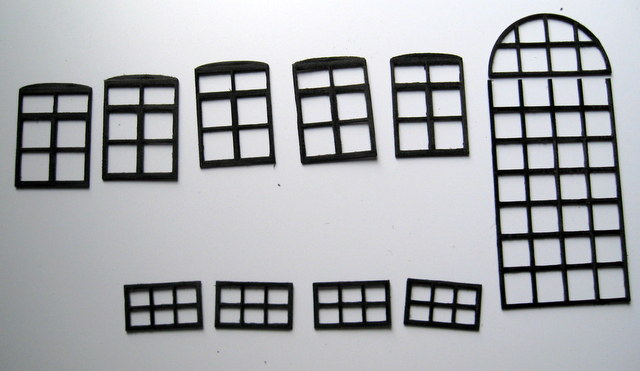 .
As you can see from the photo of the original, I've reduced the length of the building by one set of windows. This should give me sufficient room to model the engine house.

The shuttering has been removed from the cast plinth and, while the concrete was still green, I carved the upper surfaces of the edging stones. I resisted the temptation to carve individual cobble stones over the rest of the platform. 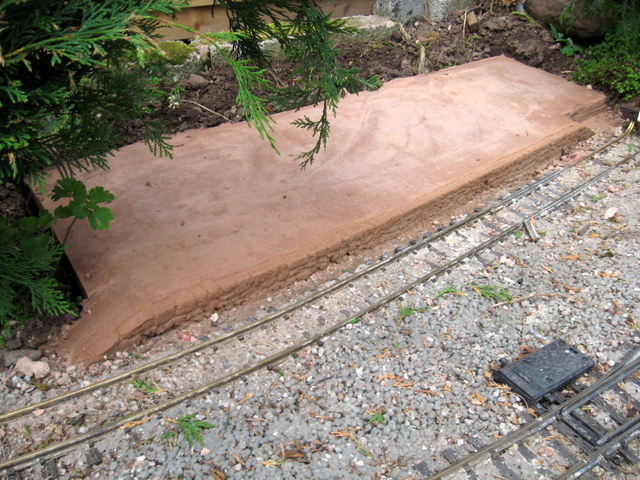 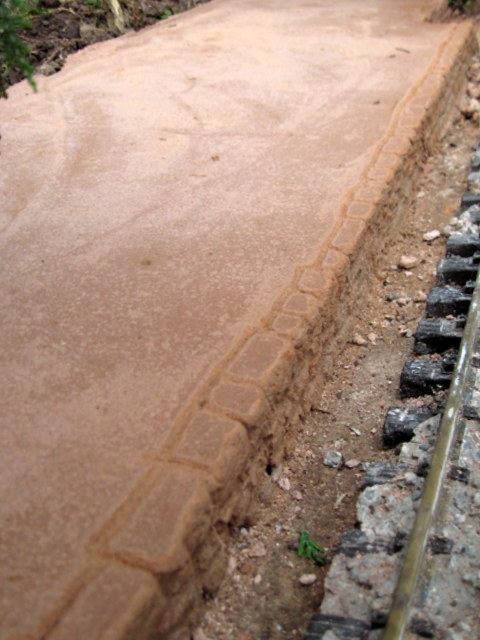 .
Now the windows are done, I have started marking-out the walls and then comes the mind-numbing job of scoring the bricks.

Actually, I'm quite looking forward to it as this building has an interesting variation on English bond brickwork. Instead of alternating rows of stretchers and headers, it has three rows of stretcher bond followed by one row of headers - and then, of course, there are the arches over the upper windows.

As they say, variety is the spice of life!

Now the windows are done, I have started marking-out the walls and then comes the mind-numbing job of scoring the bricks.

I feel for you, or rather my fingers feel for your fingers! The brickwork on the front, and brick & stone of the sides, of Bench Hall nearly did for both my fingers and head!
Philip
www.tinyurl.com/philip-trains
Top

Looking great rik. theres no denying that for repeat builds printing or casting is the way to go, cant wait to see how it turns out.
Jake

Looking forward to seeing this progress! That 3d printer of yours is a godsend for jobs like that!

The Etruscan Bone and Flint Mill is somewhere I've always wanted to visit - from memory it is preserved in working order.
Check out my steam and engineering youtube channel at...

Philipy of this parish took a look at my SketchUp drawings and repaired them. It seems that you have to interpret the way the various lines and faces are presented on the screen to figure out if the faces are reversed and if lines are shape outlines or simply just lines. I'm not sure I've explained that correctly, but it would appear there is a whole set of subtleties to drawing in SketchUp with which I am not fully conversant.

Many thanks to Philipy for his guidance and advice. Maybe he could be persuaded to create a masterclass thread in SketchUp drawing for beginners??

TinkerCAD seems to have been designed in a way that makes it difficult for numpties like me to make errors so I'm going to stick with it for now, until I reach the limits of its capabilities. It might be that TinkerCAD could act as a precursor to SketchUp. Its learning curve seems to me to be far less steep.

You've come up with a really unusual idea again. The appearance looks great - but I wonder if you are going to reproduce the smell?

All the best,
Andrew

Just discovered a rather fine looking beam engine on Thingiverse which can actually be made to work ...
https://www.thingiverse.com/thing:1350988

It looks like I'm going to be firing up the 3D printer once more. By the look of the accompanying video, I may not have to rescale it, which will be a relief, as there are 54 individual parts.....

It looks like I'm going to be firing up the 3D printer once more. By the look of the accompanying video, I may not have to rescale it, which will be a relief, as there are 54 individual parts.....

Rik lovely to watch, makes me yearn for a 3D printer, but first I need to finish the projects I have started, without starting any more.
http://www.tumble-down-falls.co.uk/


Many thanks to Philipy for his guidance and advice. Maybe he could be persuaded to create a masterclass thread in SketchUp drawing for beginners??


No Probs, Rik, glad to help whenever I can.

As for me doing a Masterclass, I'm very far from being a Master! A SketchUp Bodgeller would be closer.

I spend a lot of time going the long way round to achieve things that I'm sure should be very simple. However if you or anyone else wants to pick my brains, such as they are, please feel free at anytime.

To come back to your suggestion though, there are many video's on YouTube created by real experts, although admittedly they are often more 'expert' than I need. However, it's difficult to predict what issues you might want help with, and they might be different to what somebody else wants, and I may or may not know the answers to either!
I guess I could try to do a " This is how I created a ........" thread, in the same way that your blogs are structured.
Perhaps starting with windows? If that's of interest, what other subjects would you or anyone else want describing?
Philip
www.tinyurl.com/philip-trains
Top
Post Reply
82 posts

Users browsing this forum: No registered users and 11 guests