Some background on project,
2019 is the 60yr anniversary of the closure of the narrow gauge railway in Donegal and this has spurred new interest for me personally in the Donegal railways.
Likewise with this 60yr anniversary the Donegal Railway Heritage Centre www.donegalrailway.com are trying to raise funds to get the 4-6-2 Class 5 Drumboe back on display at the museum, initially as a cosmetic restoration, but ultimately back to steam which would be amazing to see. 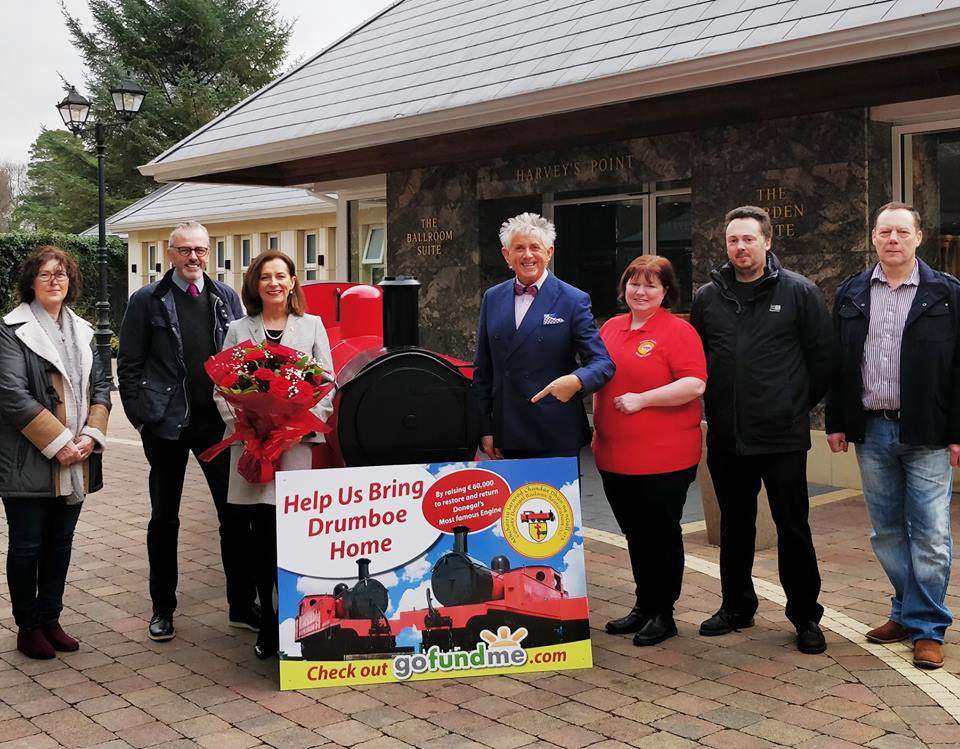 So to help I am working on a a 15mm scale (3ft narrow gauge to 45mm track) version of the Class 5's initially all in plywood as I can do it on my laser cutter, which will be available as a kit and generate some funds for the Drumboe project.
Drumboe at the moment is in bits at the railway preservation society in whitehead, but one of her two remaining sisters Meenglas has just came back from a cosmetic restoration and sitting outside the foyle valley museum. below 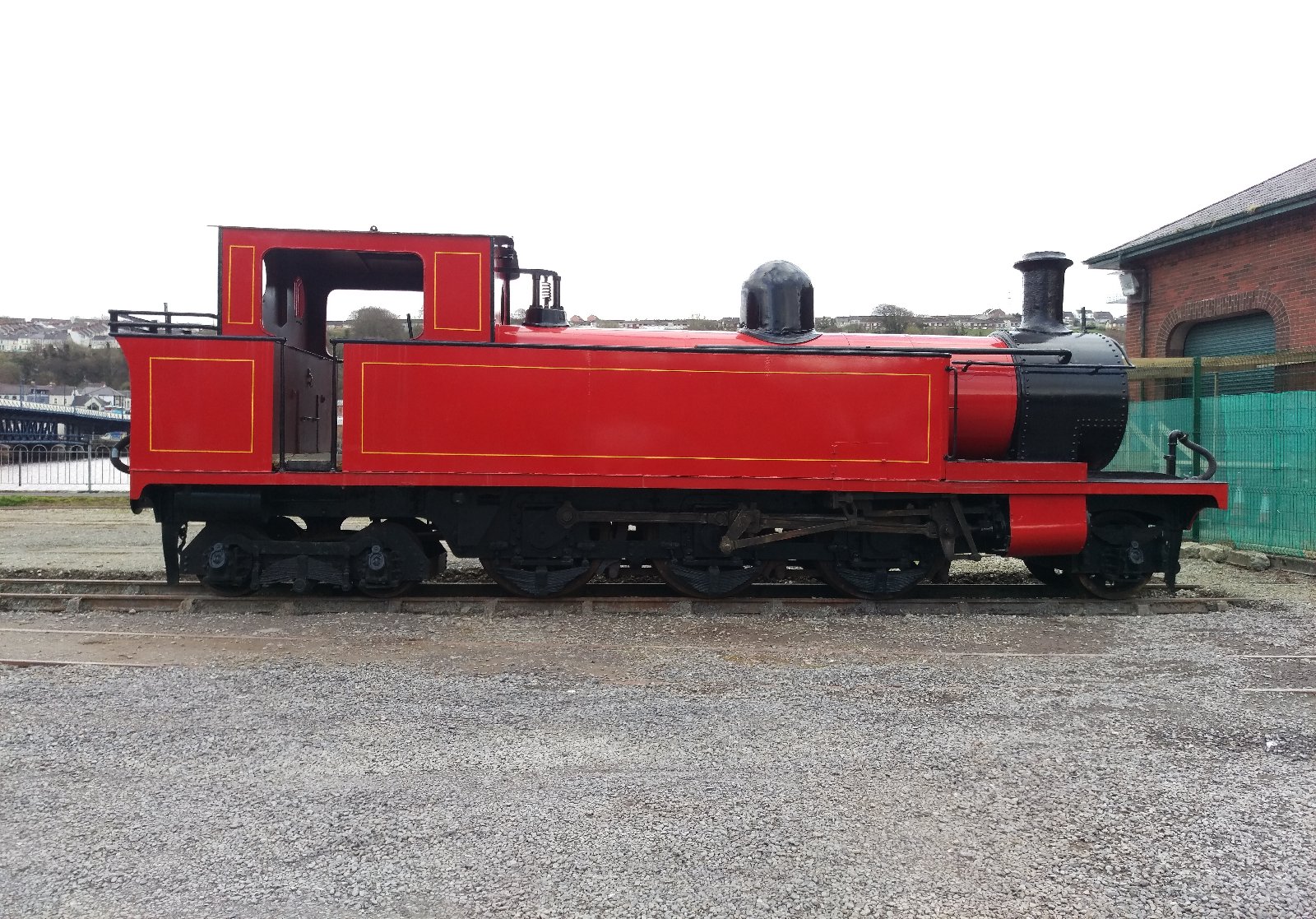 For Narrow gauge these are a big locomotive over 30ft long, and I think around 44 ton.
Having access to meenglas allowed me to go and take loads of pictures and measurments which I have drawn up everything in autocad initially fullsize then scaled down to .0492341 1:20.3 or 15mm scale, having it drawn fullsize allows me to scale it any size really, and having them as proper cad files means down road I could get it made in metal.
Its a bit of a tedious task making each part suitable for laser cutting, to get bits to fit together etc and you can see from the autocad screen shot there is a lot work done on it so far. 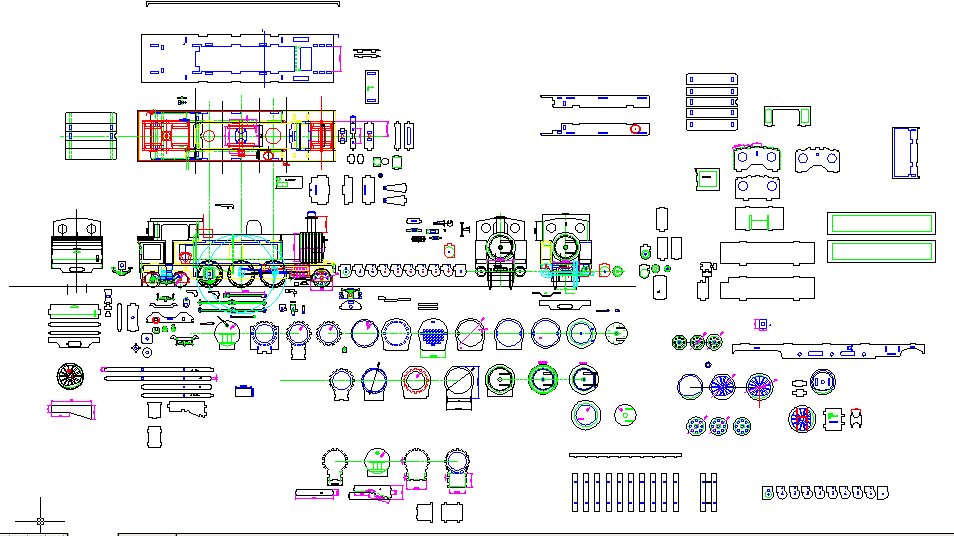 Very interesting Seamus and I admire your attention to detail. I don't have the patience but I appreciate the efforts of those that do.
Thanks for posting.
Dave Miller
currently building the 5" gauge Circle Line
Top

This is my first mock up it was rushed together to have in time for a event at the museum a month or so ago, its the basic framework, wheels etc just temp fixed in place, not much else I could do with this type of construction for the boiler, think it will be ok for a static model, in the meantime will look out for a suitable tube about 55/56mm dia, for a full painted one that might roll one day.
smoke box is made up of 15 rings, steam dome and chimney I just 3dprinted for speed but I think might stick with 3dprinting for these especially for the steam dome as I have another made with bigger flare and painted red and it looks fairly good.
There are other details I think will be more practical to 3d print rather than laser cut so its probably going to have both materials rather than initially intended all wood. 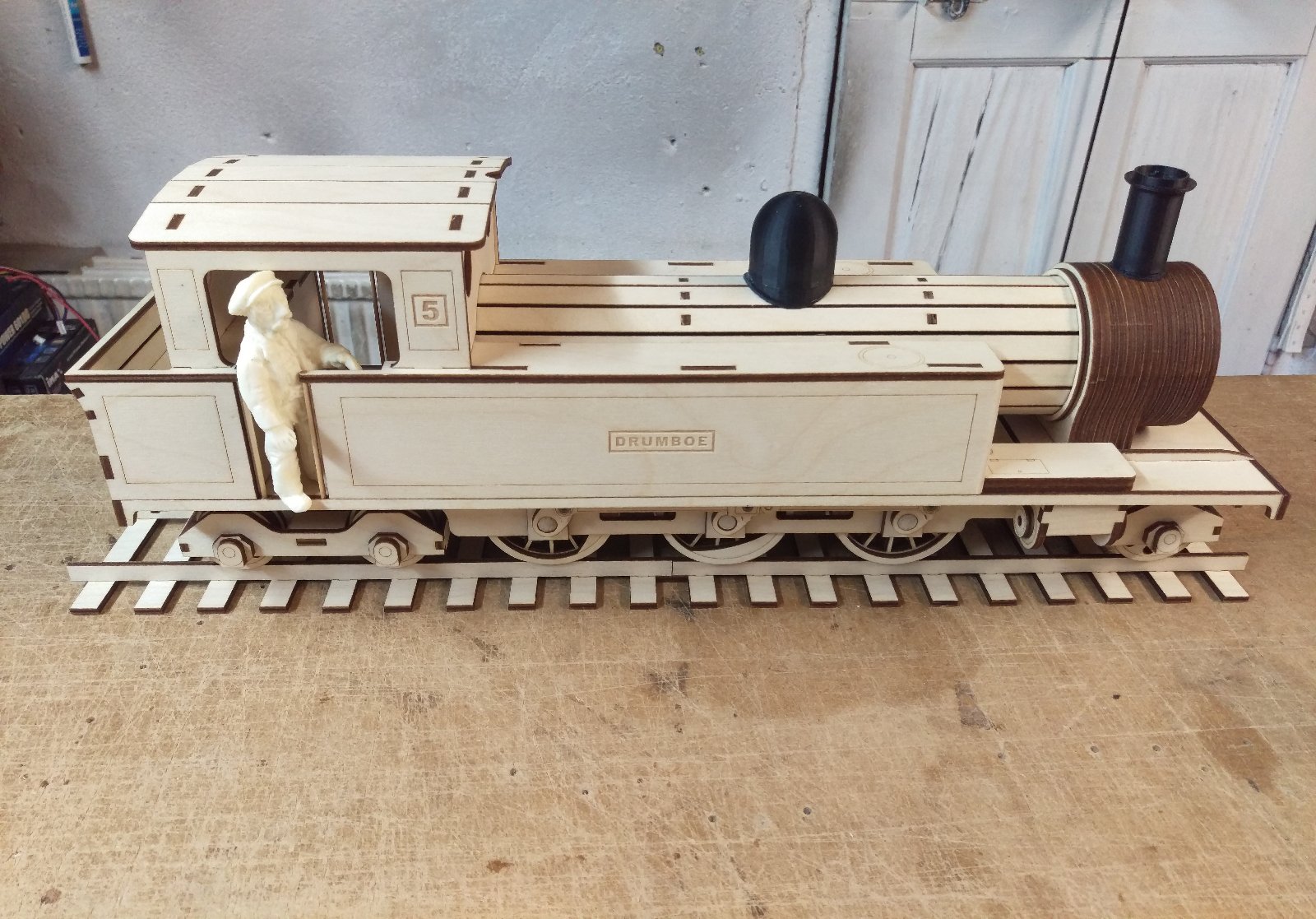 It is a big beastie. Must have been quite a bit of work. How do you do the boiler if you are laser cutting wood?

I typed this in then the picture above appeared when I submitted it. So it is a series of strips. I supposed you could then roll some paper round them to get a smooth shape?
Top

I typed this in then the picture above appeared when I submitted it. So it is a series of strips. I supposed you could then roll some paper round them to get a smooth shape?

Not really many other ways to do it other than like smoke box and series of rings, but yes you could wrap it or I think better try to find a cardboard/plastic tube or wooden hand rail same diameter.
Top 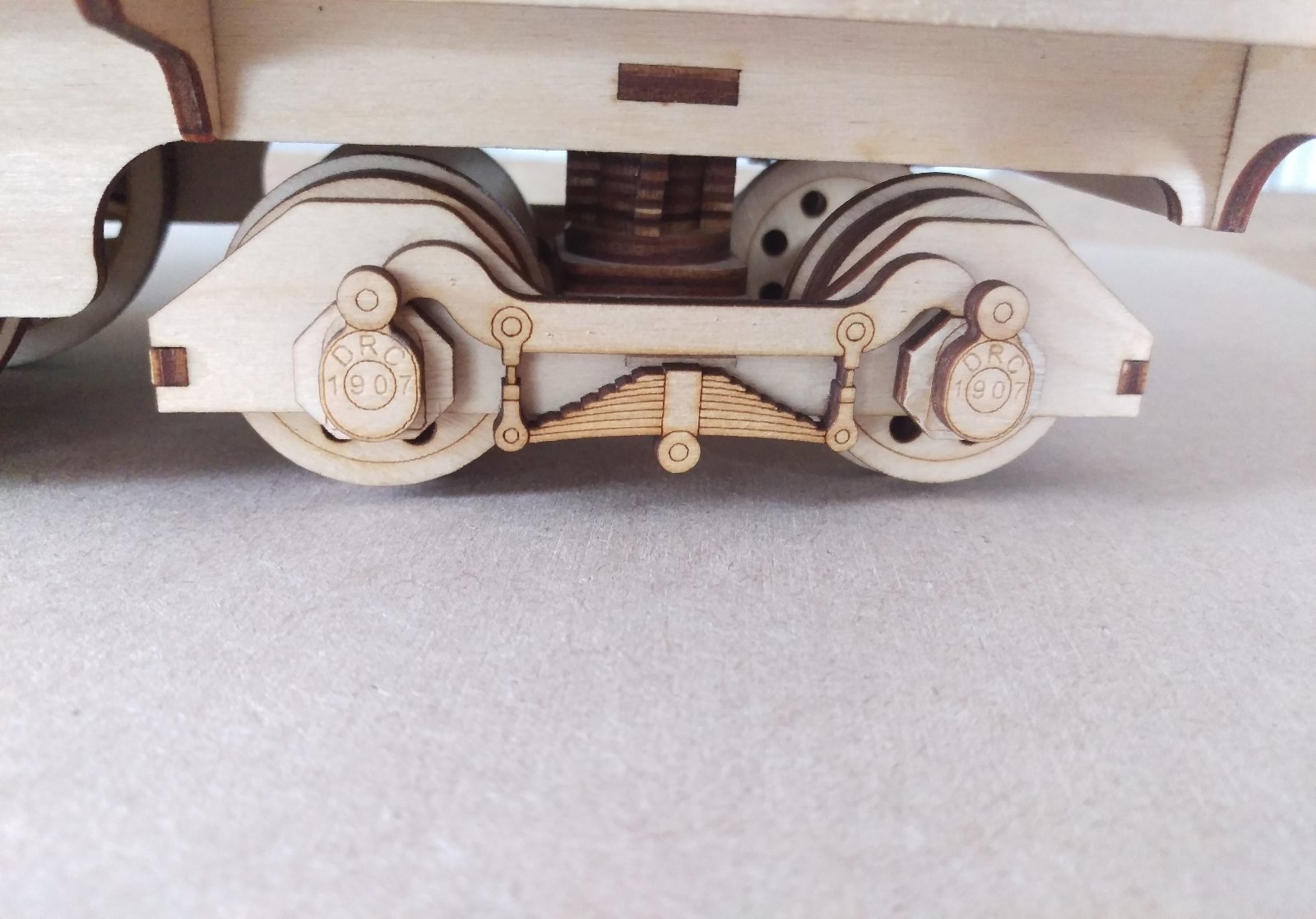 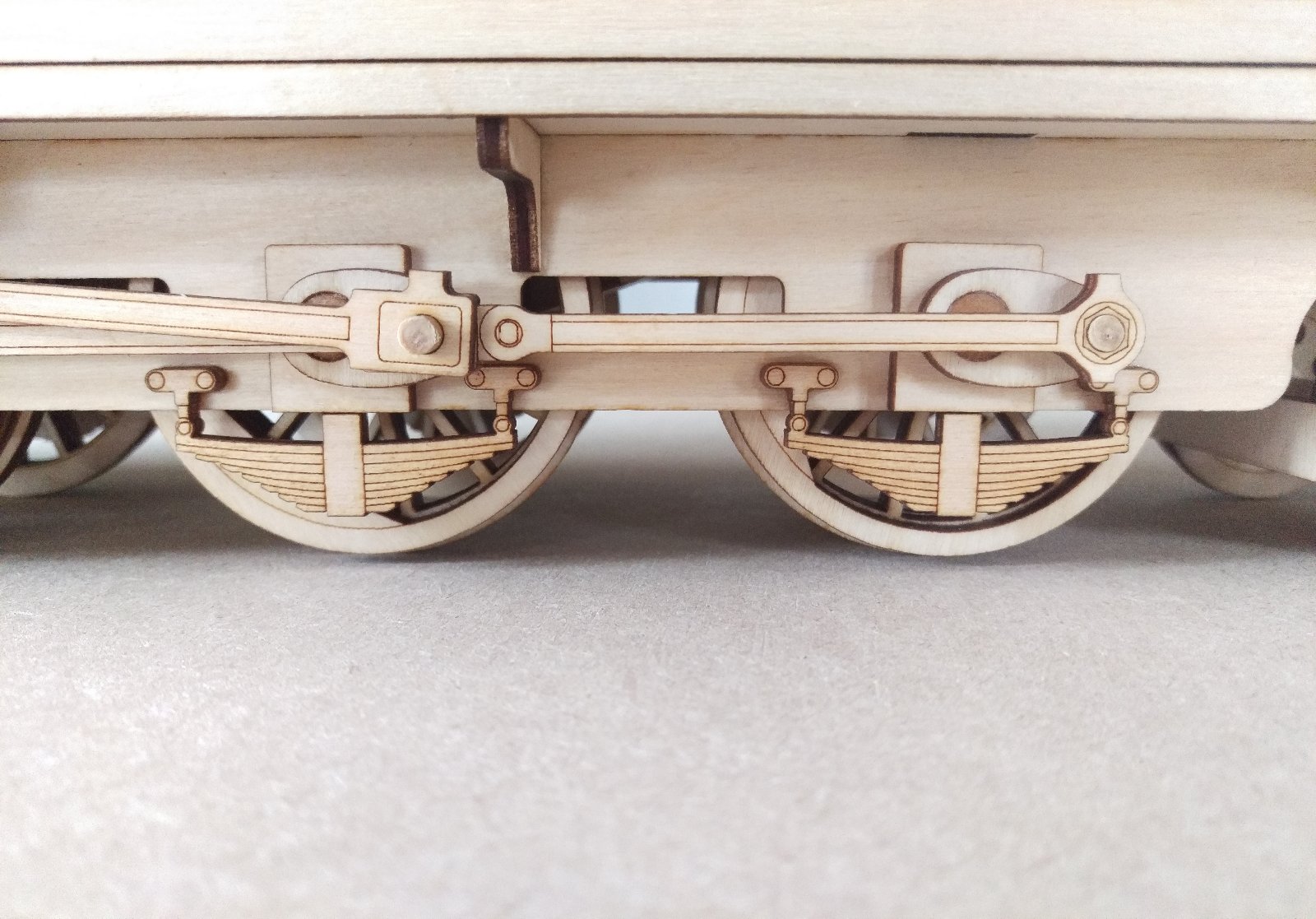 Wow! That's stunning. I wish I had a fraction of your expertise - the possibilities seem endless.

I agree, it's looking wonderful! The detail's amazing... Having done just a little CAD myself, I'm VERY impressed with those lovely curves on the bogie...

Back again, been at this on and off since last post but been working on it everyday for past two weeks so I can get it finished now being a good time, during C19 lockdown
To catch up I was last working on the suspension bits and below is the front pony truck, with its suspension and axle cover done. Wheels on it are bigger than the ones on rear bogie. Fronts are 2'9, rears 2'3" on Fullsize, model are 41 & 34mm, Fullsize mains are 4' model 59mm. 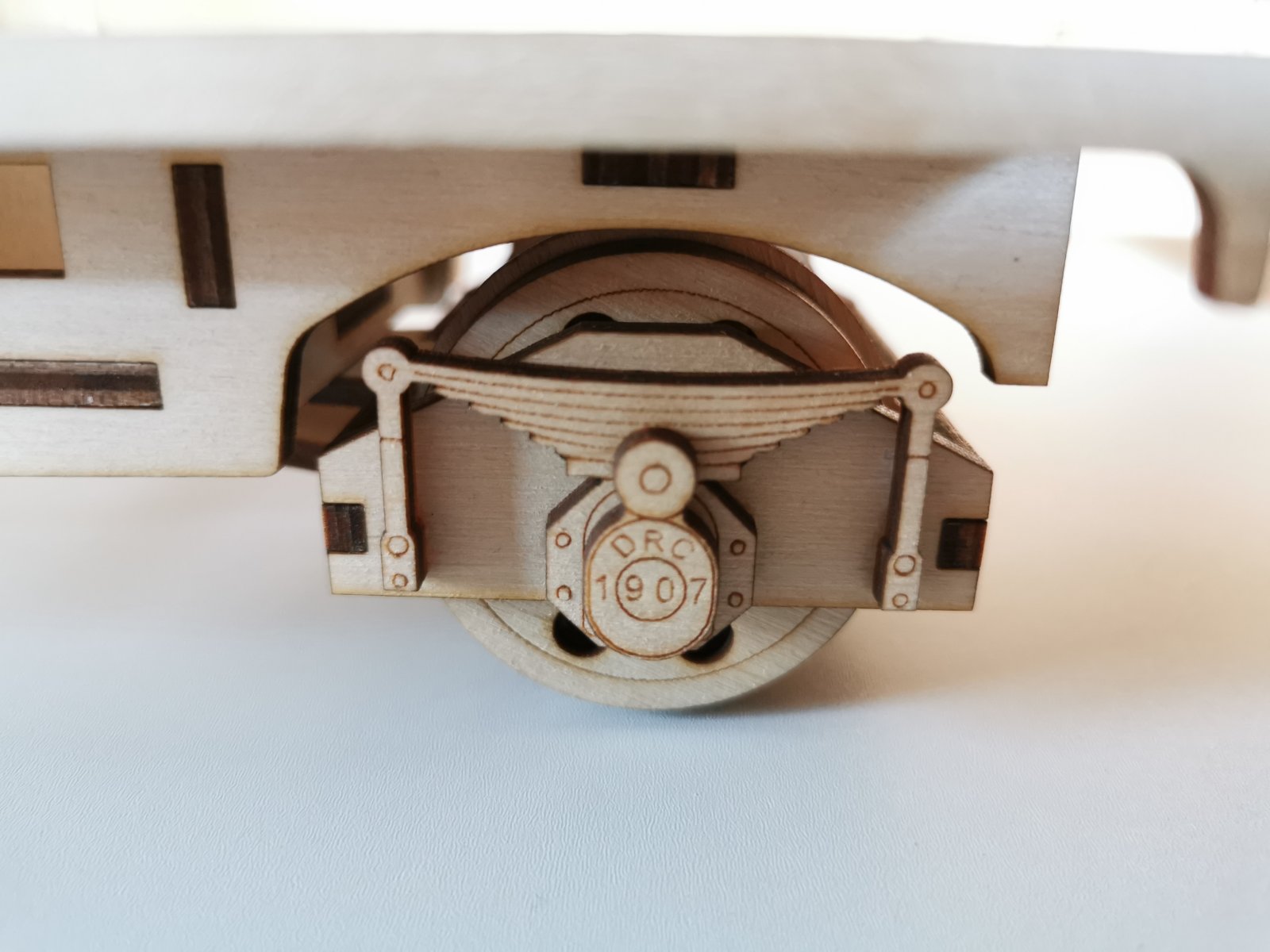 You can see pivot arm and bump stop (dont know proper term) plus in bottom picture the pivot point on the chassis and cross beam where the bump stops slides from side to side. Figuring this out took about 3 visits to the prototype Meenglass as it is sitting fairly low at front, dark& rusty and hard to see get good pics. 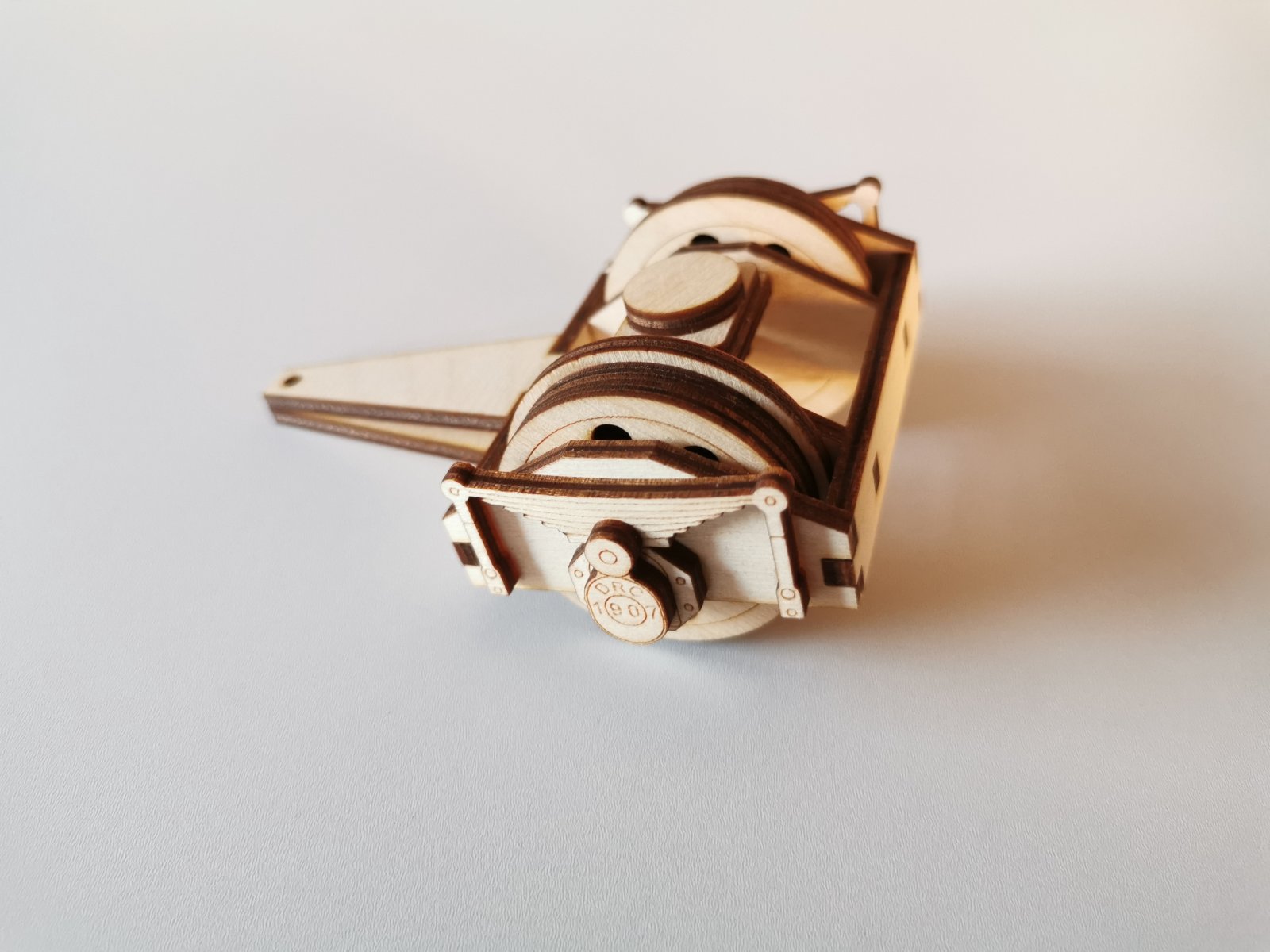 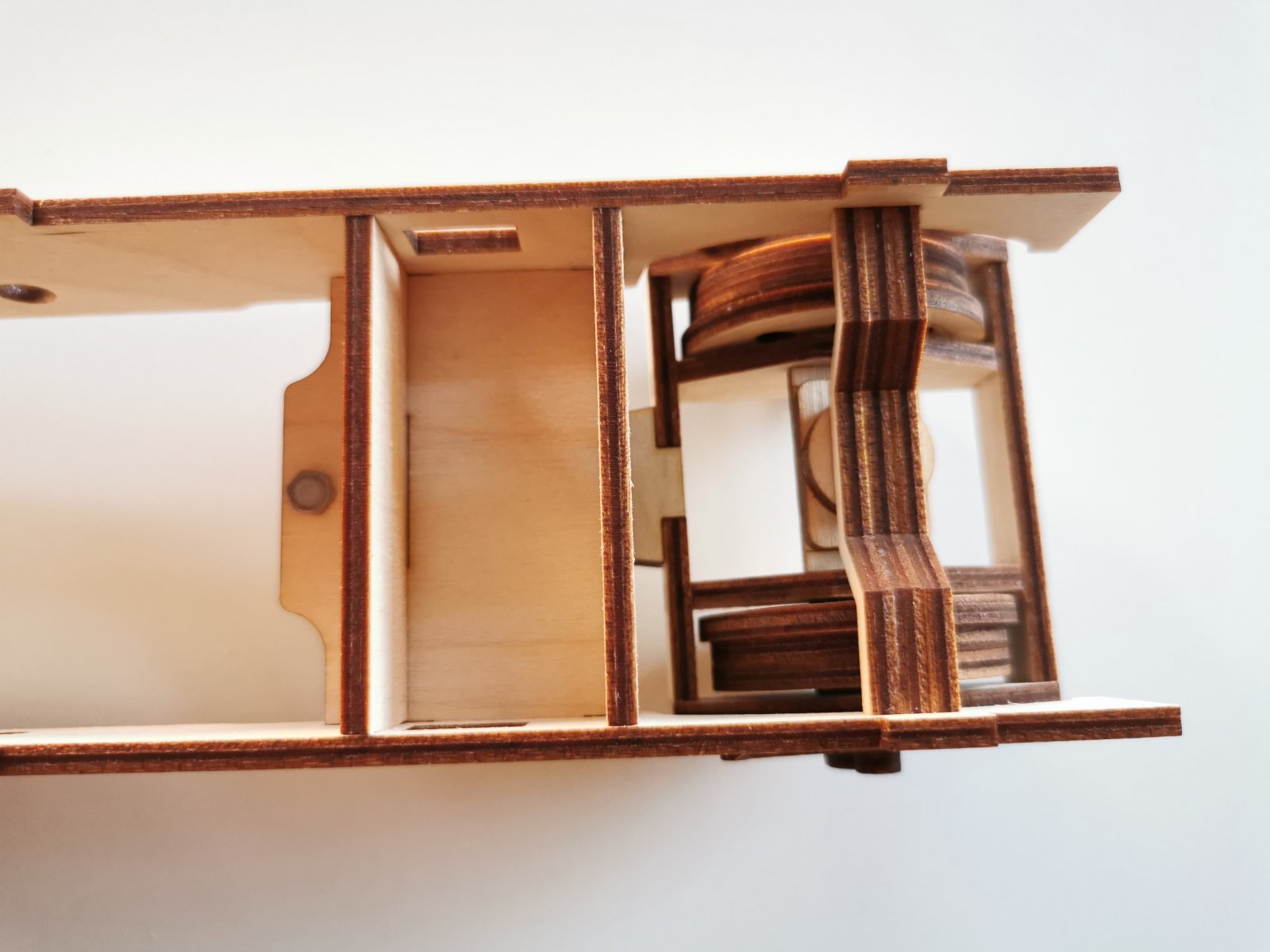 Rear bogie and front pony truck painted black they dont look like wood anymore, not easy to get good photo when its black, As I go along I am building two more models one to paint and other to proof everything fits. 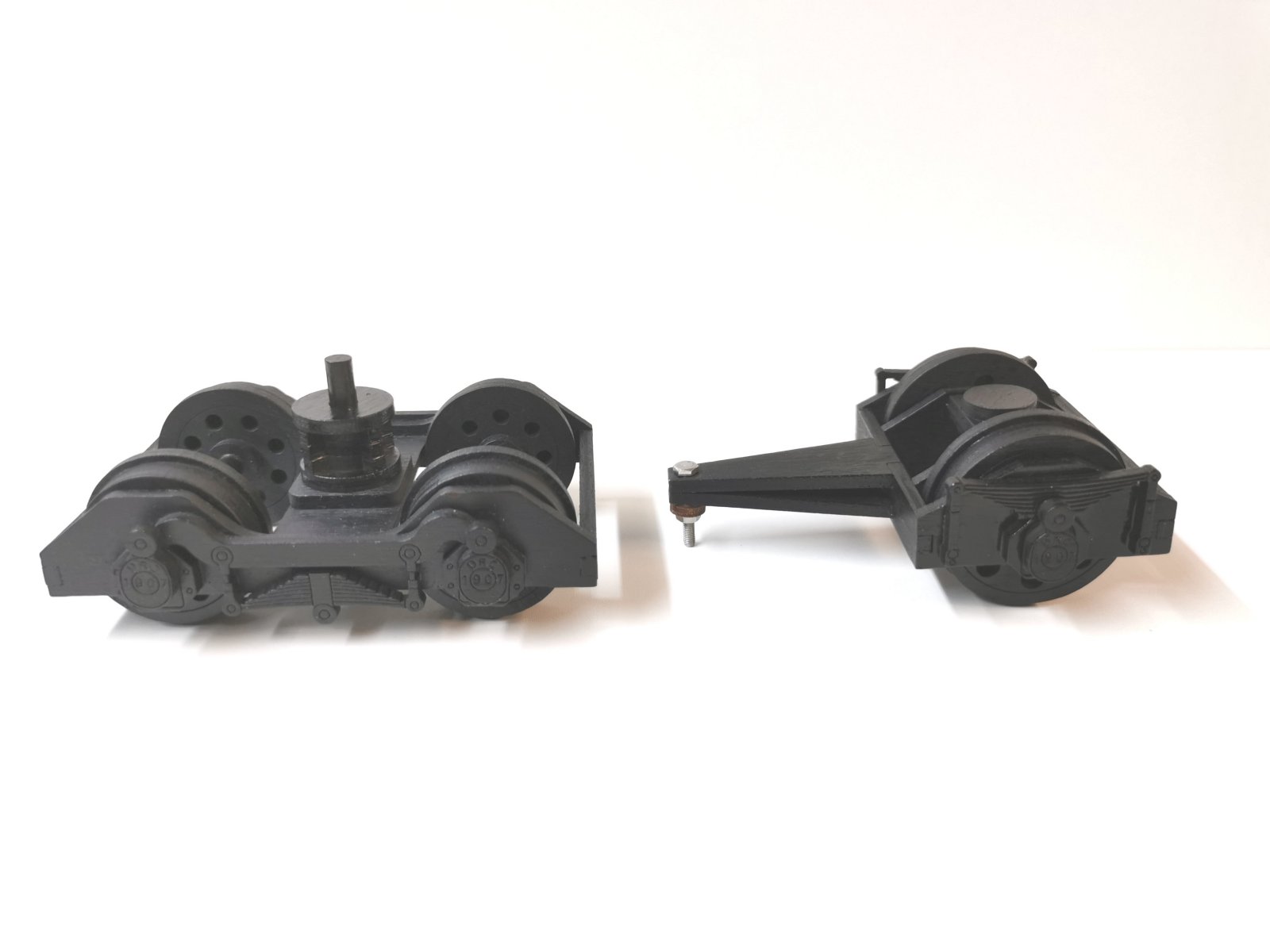 What a difference a coat of paint makes!
YouTube Channel
Top 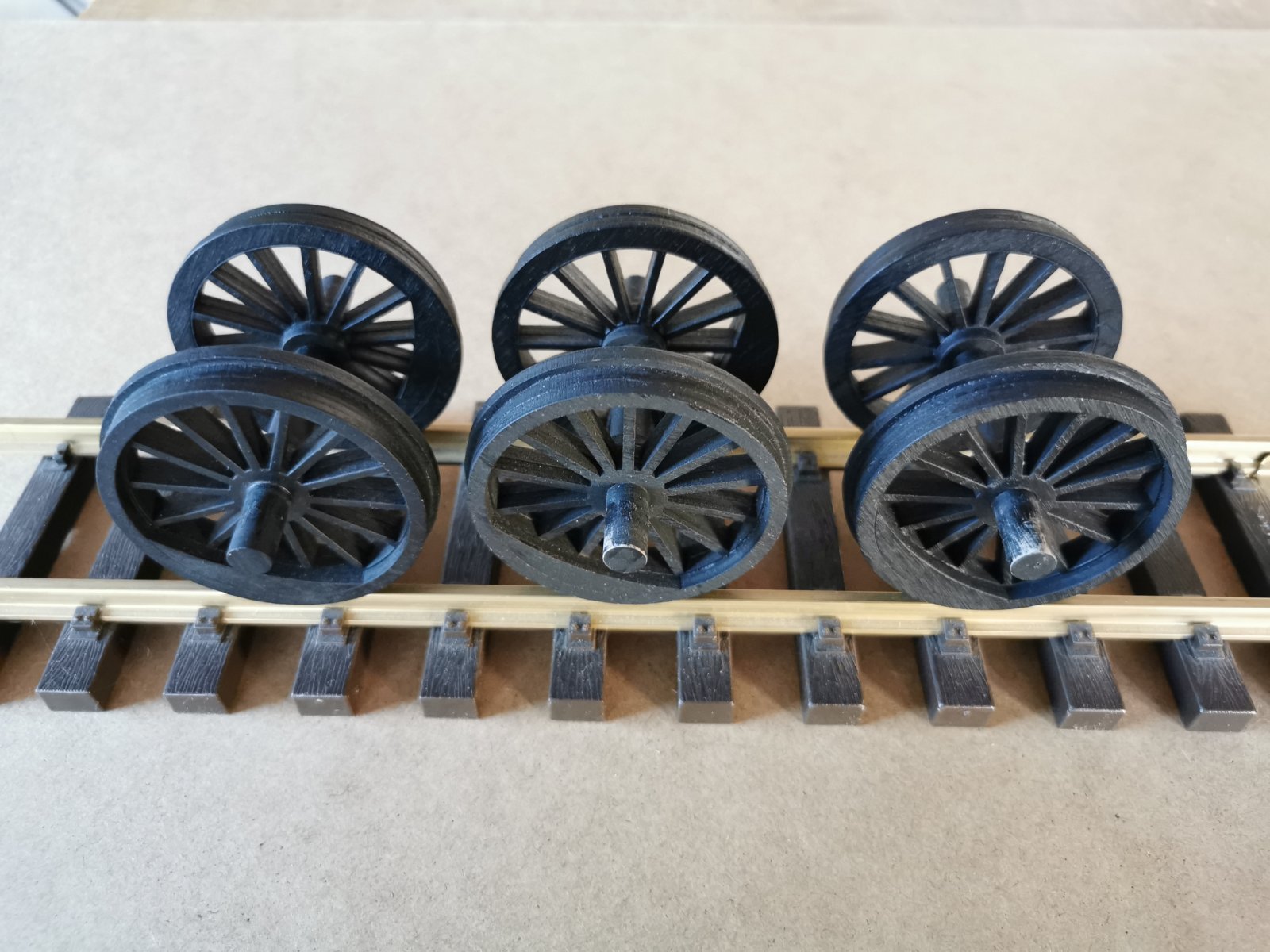 Smoke box door, wondered for a while how to do this then when working on something else it came to me, I could have made a dummy door but wanted it to open, so below is the method I came up with, 2mm dowel (tooth pick) for hinge,
There are some variations in the 3 class 5's that are left and one is Drumbow dosnt have any rivets around from of smoke box, which makes job easier 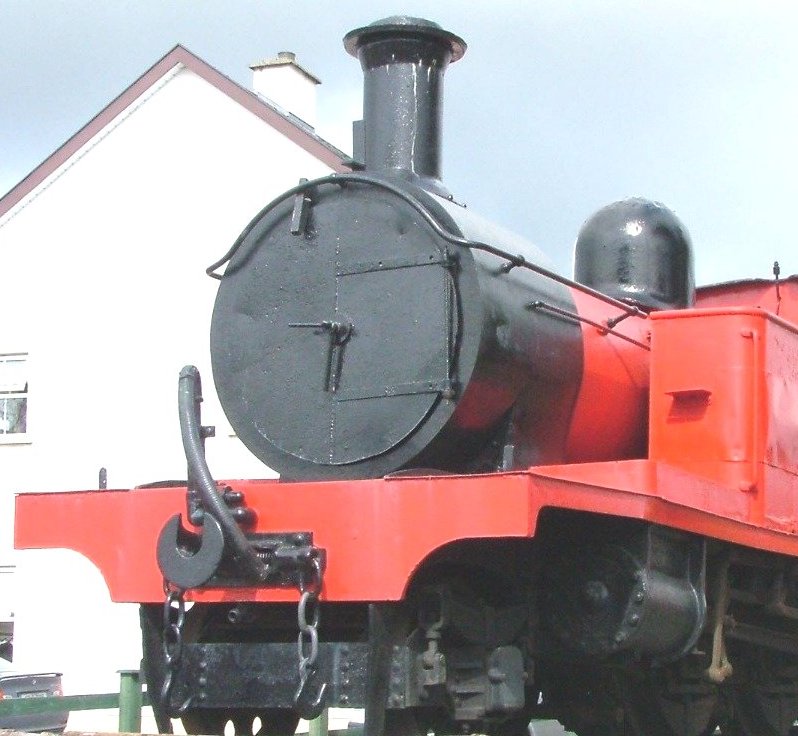 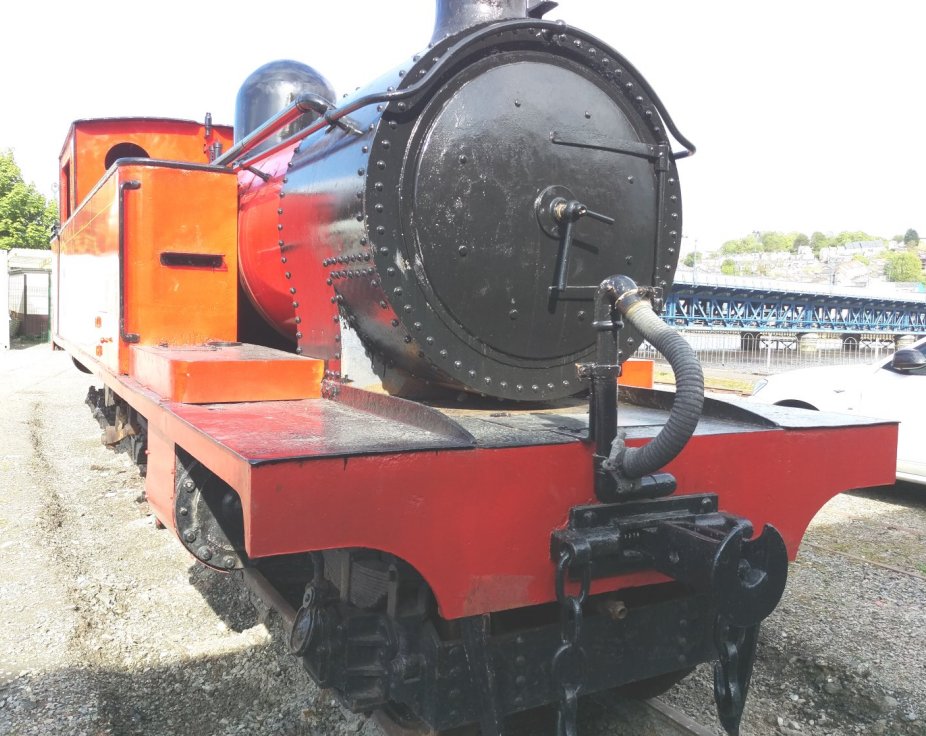 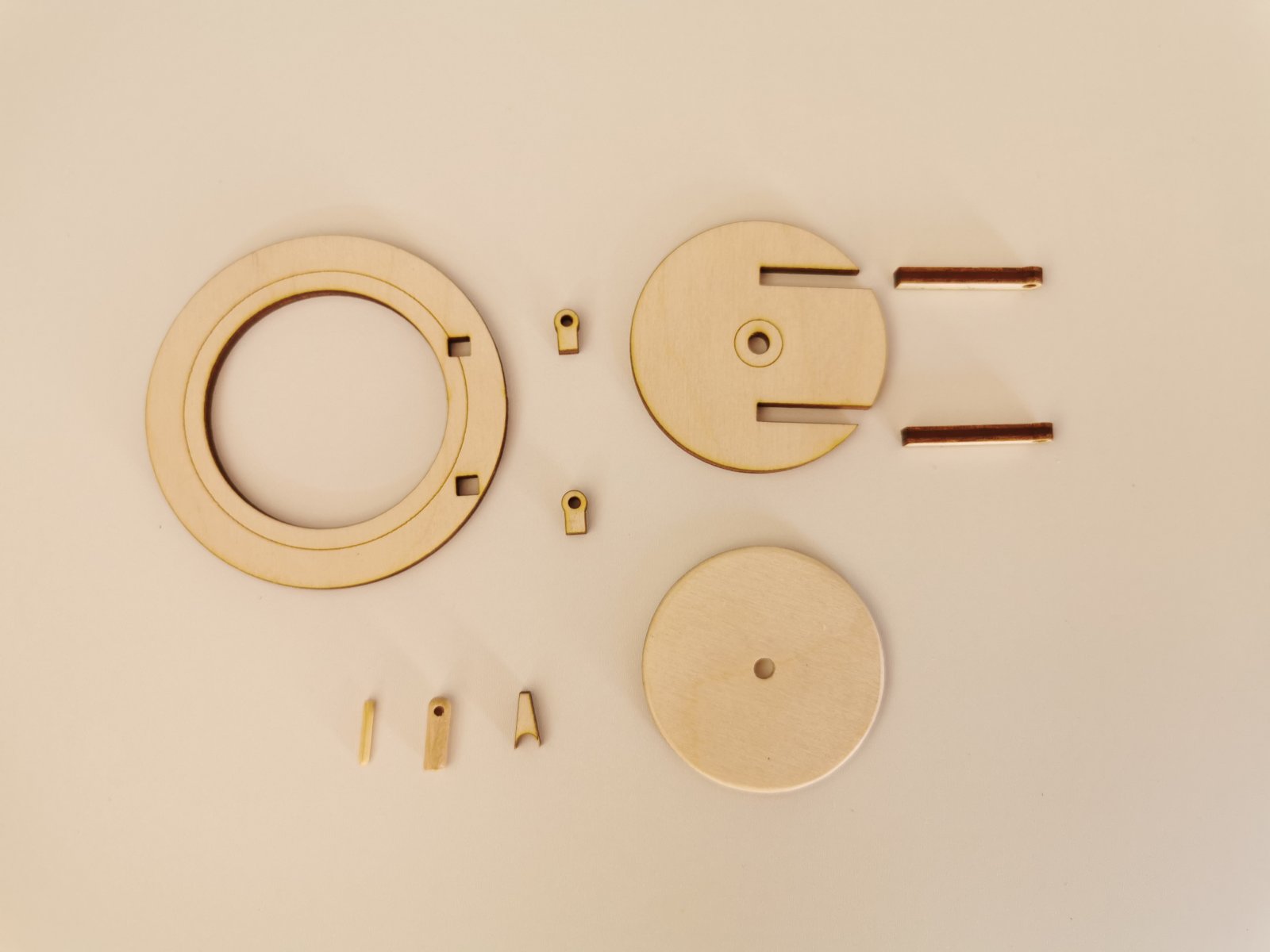 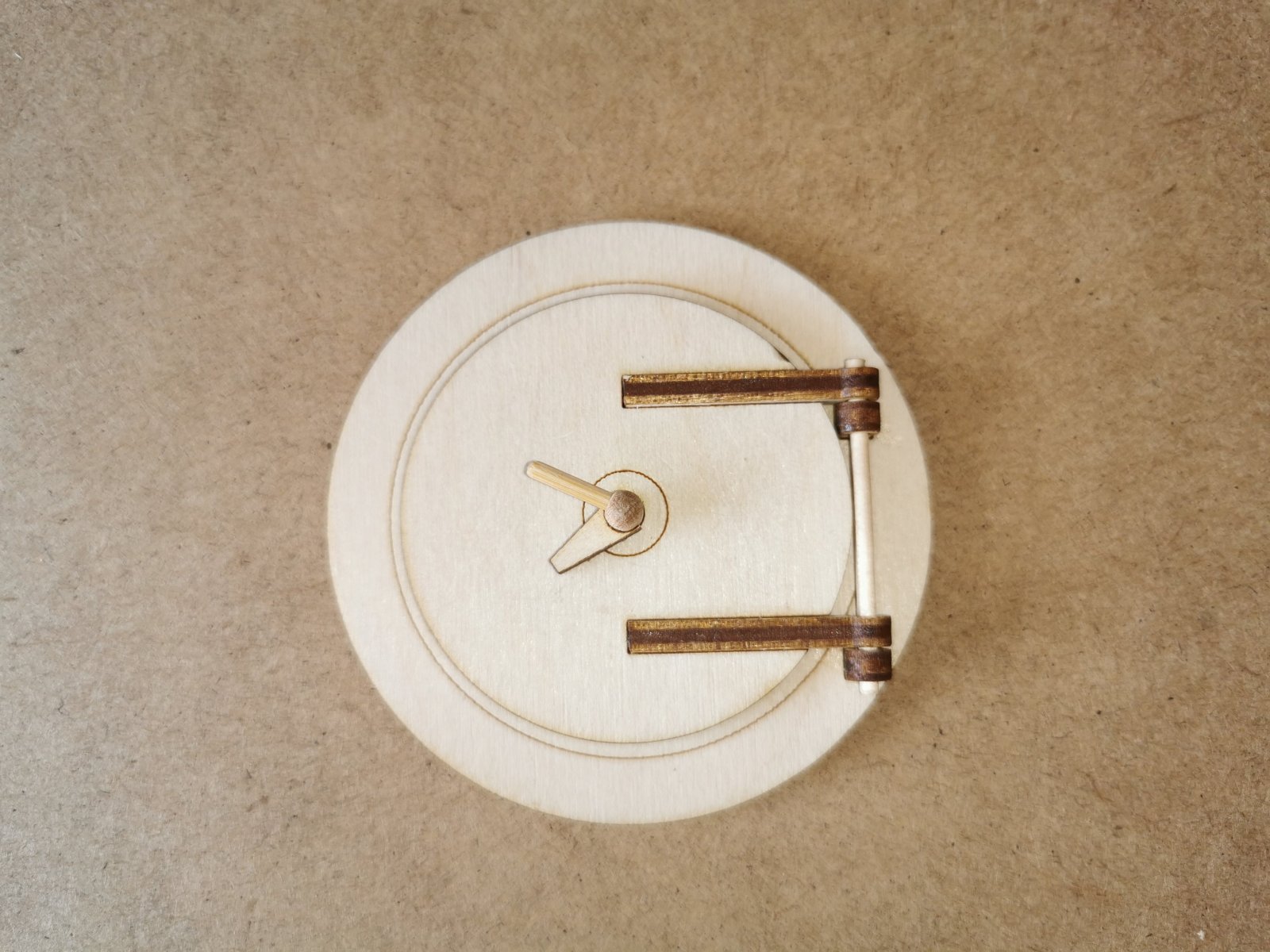 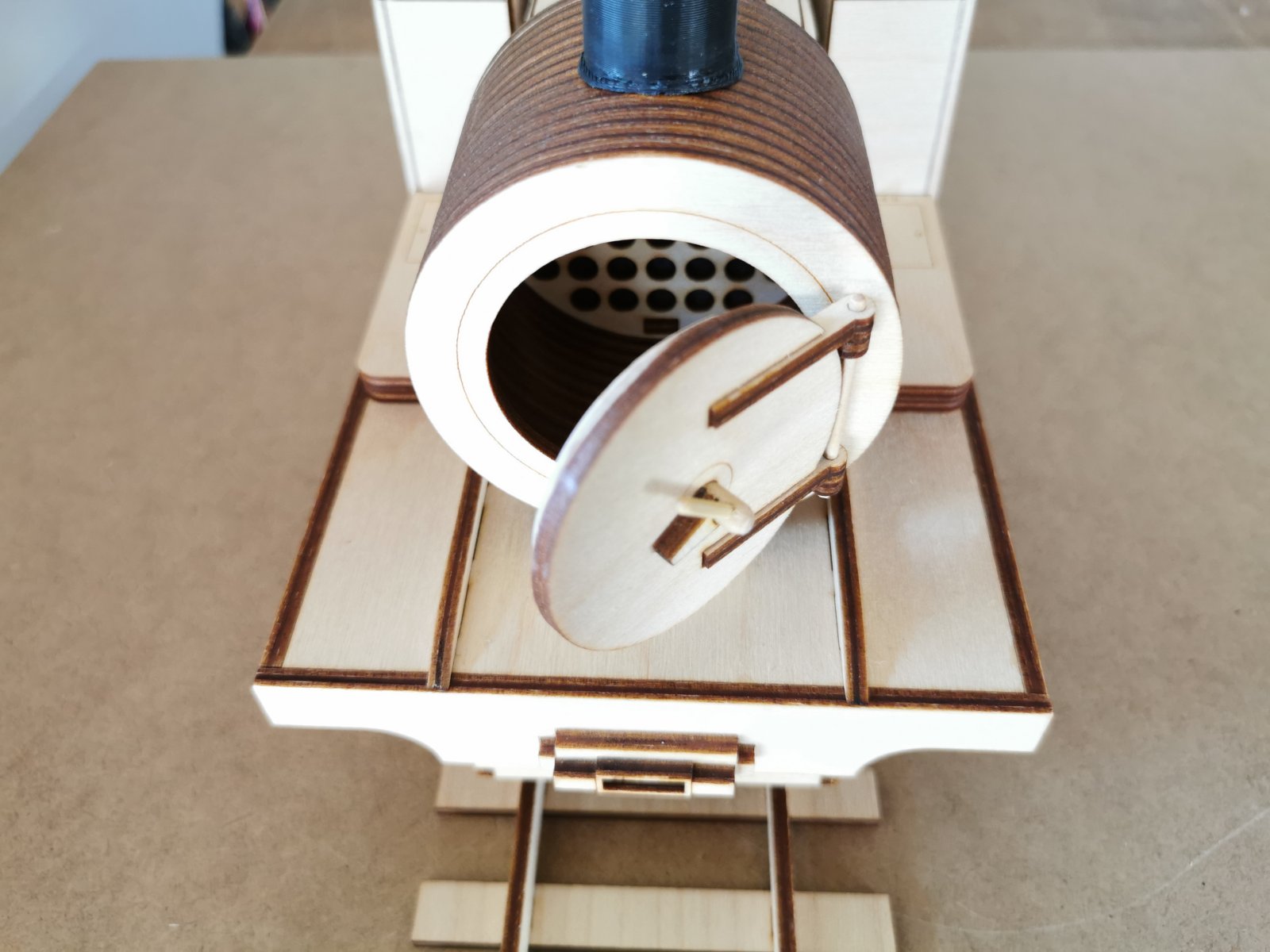 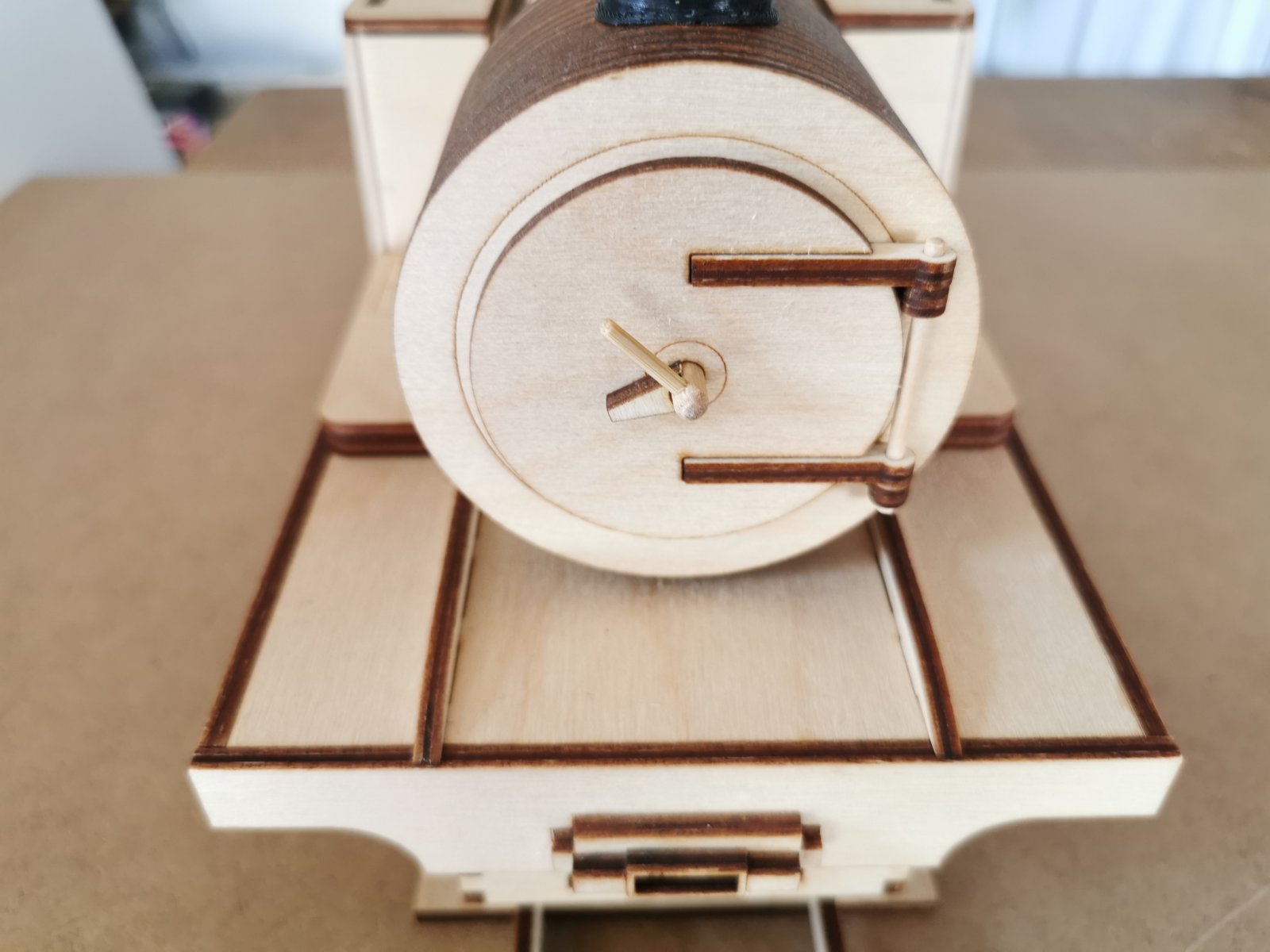 Back to the drive gear, made the cylinder as it looks under the cover, its slightly angled down as can be seen from the crosshead slide, I wasnt certain on what angle but made it when the centre drive wheel crank was horizontal, the connecting and the piston rod are inline, and this looks correct.
The piston rod is free to move in and out with the con rod and I made the crosshead so it does slide up and down the slide, took a bit of figuring out but my dimensions from Meenglas scaled down are fairly accurate. 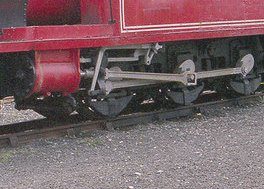 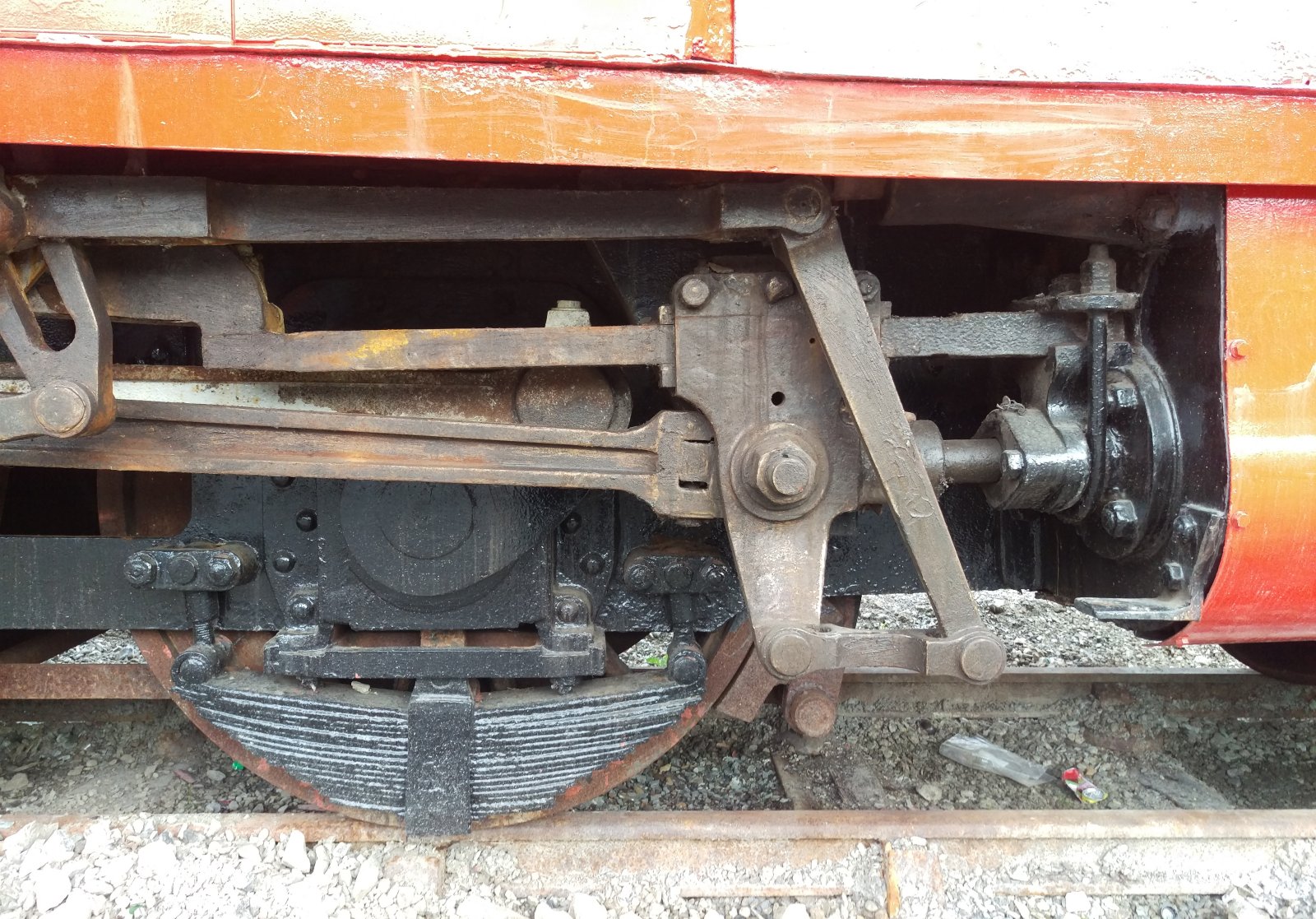 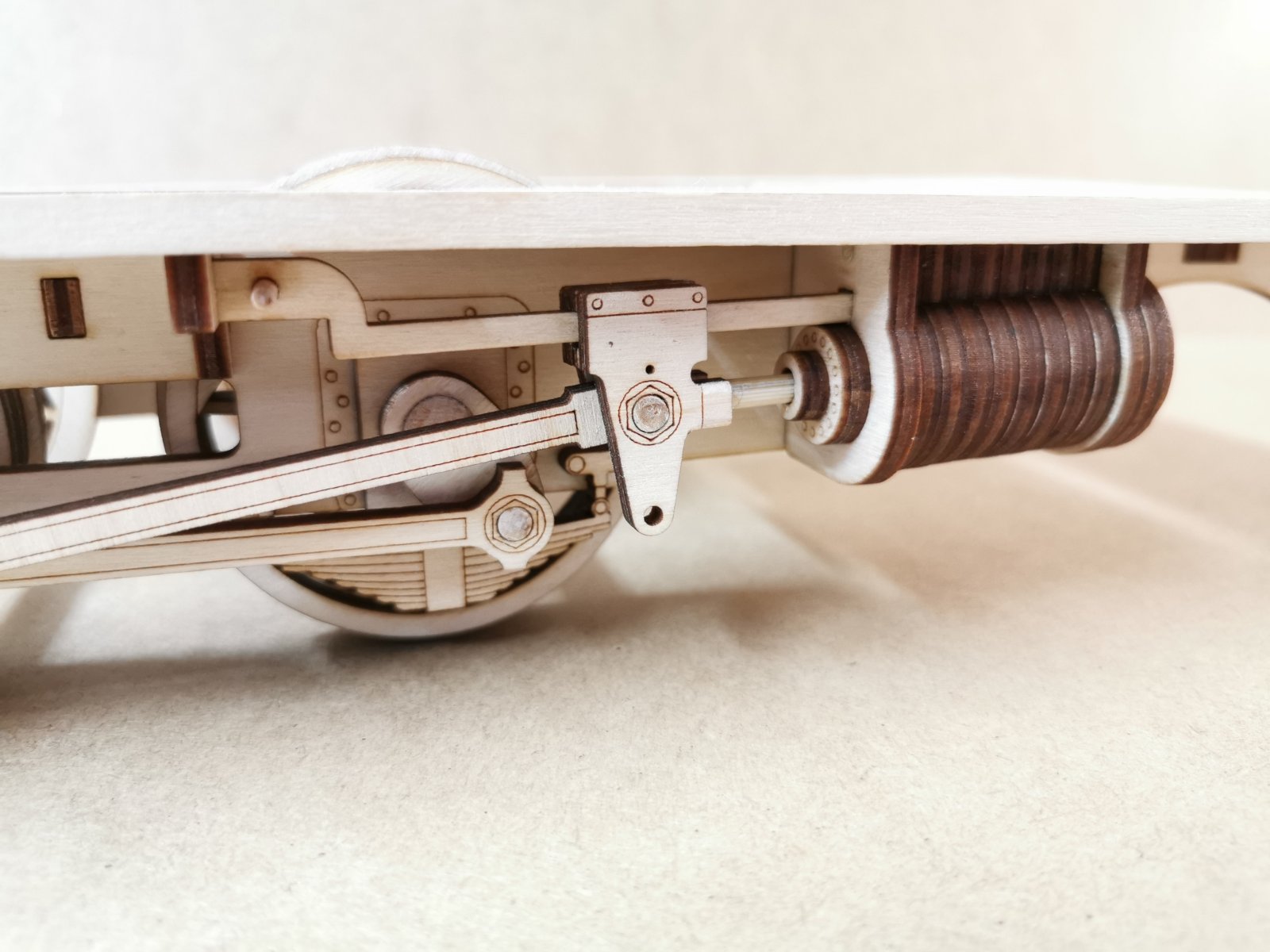