What is your latest project?
Post Reply
7 posts • Page 1 of 1

OK well, I clearly haven't reached the point where enough is enough, although I ought to have, maybe. I have this Roundhouse "Billy" that I can't stop tinkering with. I built it about six years ago, it was conventional at first but it doesn't look like a "Billy" anymore. I can't decide what it looks like. I don't think there are any engines in real life that look like it.

Here is a brief glimpse at how my mind works with models -especially a "generic" type of model where there is no particular real-world prototype, meaning one can do what one wants. As usual I'm going to ramble a bit before getting to the point and asking specific questions. What usually happens is that I'll be admiring the locomotive, and some inconsistency in its detailing will suddenly become apparent, and then it will bug me until I do something about it. One example is the side-tanks. Now on a Barclay or Koppel engine, which is what "Billy" is meant to look like, you'd have a well-tank. So the little stubby bins in the front of the cab are likely to represent coal bins. But the Roundhouse chassis is obviously not a well-tank. This kind of thing doesn't bother a normal person, but it bothered me to the extent that I made a new cab front without them. Luckily it has a tender to explain where the water and coal are supposed to come from. With the tanks gone, it was easier to see that the gas-fired boiler doesn't have a firebox. So I made a little "throat plate" out of sheet brass that sits in the frames and blocks the view under the boiler. While I was making the new cab front sheet, I decided to give the engine circular spectacles rather than the oval ones. I thought this would make the engine look less continental and more British. Well anyway, there's a lot of extra detail that I've added to make this totally fictional locomotive look at least like it's PLAUSIBLE.

So the latest thing that happened was, as a result of my uncontrolled buying-spree in Peterborough the year before last (I can't resist buying little castings- I don't know why, I'm like a magpie), Billy wound up sporting some vacuum-brake hoses and a vacuum ejector exhaust pipe sprouted out of the smokebox. Also some little phoney clack-valves on the boiler sides. So OF COURSE I admired these new details for a year or so and suddenly it started to bother me that, while I now have vacuum connections between several wagons in my little train, there is quite glaringly no connection between the loco and the tender, ither than the draw-bar and fall-plate. So, I have been trying to tell myself to forget about it, but the engine has a tender and no way to represent how water might concievably travel from the tender to the boiler, not to mention vacuum from the loco to the rest of the train.

Now it happens that one of the things I collected from vendors in Peterborough in my magpie-like trinket hoarding was a set of very nice cast dummy injectors from Mr. Bailey. These aren't on offer from his website but he had them at his table at the show. The trouble, as I discovered later, was that they were meant to attach to a side-tank. Therefore they were not suitable for mounting under the cab, which I presume is the location of choice for tender-locomotive injectors. SO today, in a fiddly mood, I sawed them up into pieces and soldered them back together, using pictures of the "special" injector on the Ffestiniog's Blanche and Linda as inspiration. I think that's what they call the under-the-cab injectors on those locomotives that were added when the tenders were attached. Someone will correct me if I'm wrong. Here is a picture of one re-configured injector under an original one. 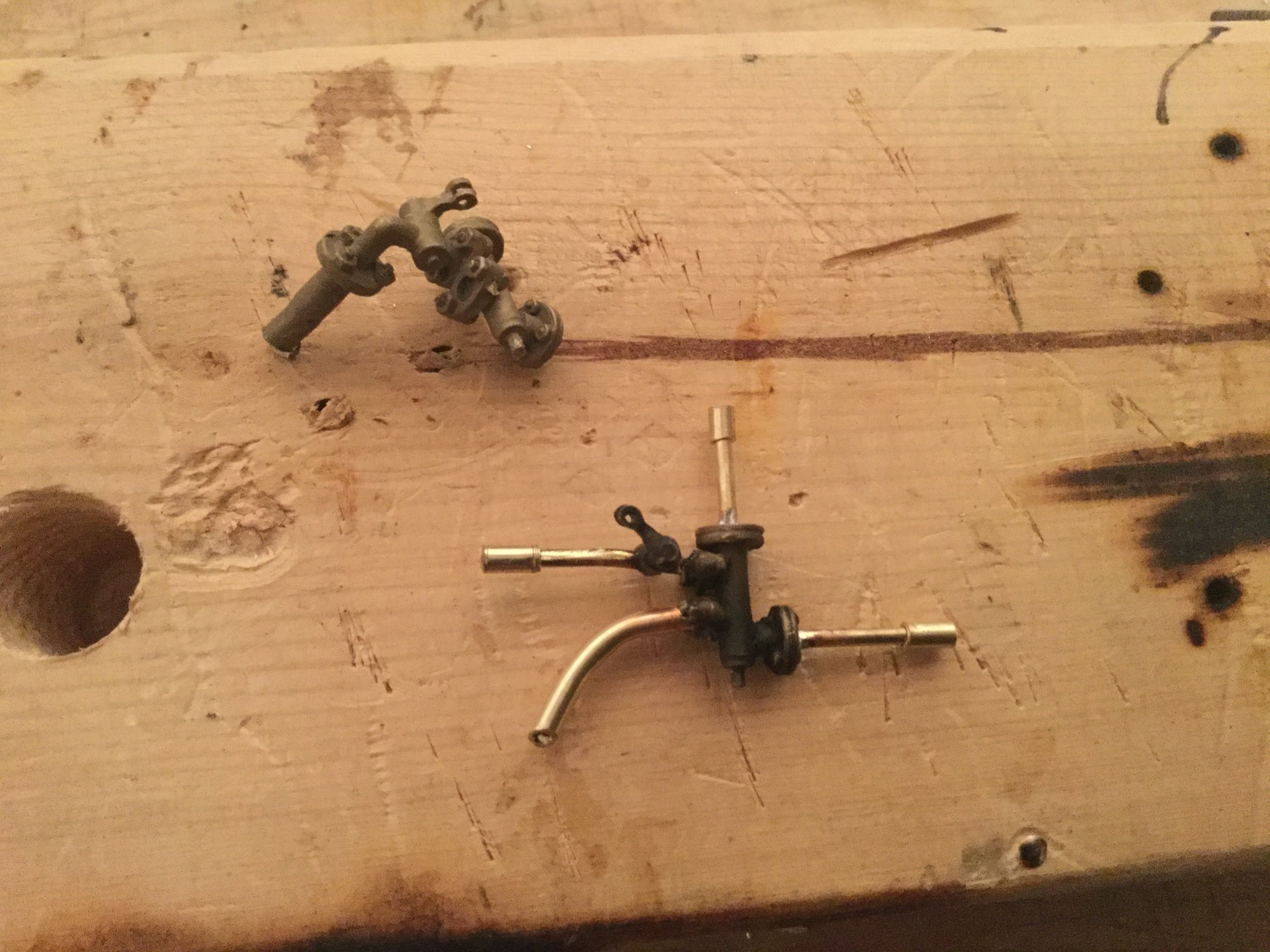 It turns out I'm terrible at soldering, but I eventually got the pipe-stubs soldered on. Some copper or brass tube will slip over them once I've decided how to run and attach the multifarious pipes and things. The water-supply pipe will lead aft to a hole in the buffer-beam, which will connect to a short bit of hose connected to a fitting on the tender.

Now I have a question about all this. I realize this isn't a model of a full-size engine, but I am wondering about full-size practice - at least in theory. It's my understanding that locomotives always have two injectors. Now it would make a certain amount of sense for them both to be on the same side. But that's a huge jumble of piping! Do some locos have one on each side?

Am I going past the bounds of reasonability here? I don't think Tag Gorton would think so- but then I haven't seen injectors on any of his locos, either.
Top

Keith S wrote: ↑
Sat Apr 20, 2019 6:35 am
It's my understanding that locomotives always have two injectors. Now it would make a certain amount of sense for them both to be on the same side. But that's a huge jumble of piping! Do some locos have one on each side?

Yes, two injectors is the usual arrangement. Some (Lilla when first built, Isabel at Amerton, for example) only have one with the secondary supply provided by a pump driven by a crosshead.

For locos with two injectors, one each side is the usual arrangement on standard gauge locos. On the narrow gauge, and I'm thinking FR here, examples are:
One each side: Garratts, Fairlies (except Merddin), Prince, Palmerston, Mountaineer, Lilla
Both on same side: Linda, Blanche, Merddin (but on the driver's side)
Top

Thanks Tony! I think I will put one on each side, for two reasons: It will be simpler to do the plumbing; and also the locomotive will have this interesting detail on both sides.
Top

Here is one of the injectors temporarily installed on the locomotive. I think it adds some visual interest to the area under the cab. Still have to fit a pipe to the rear buffer-beam and a hose to the tender. I fitted it by threading the steam-pipe and using a nut and collar to secure it to the cab floor. 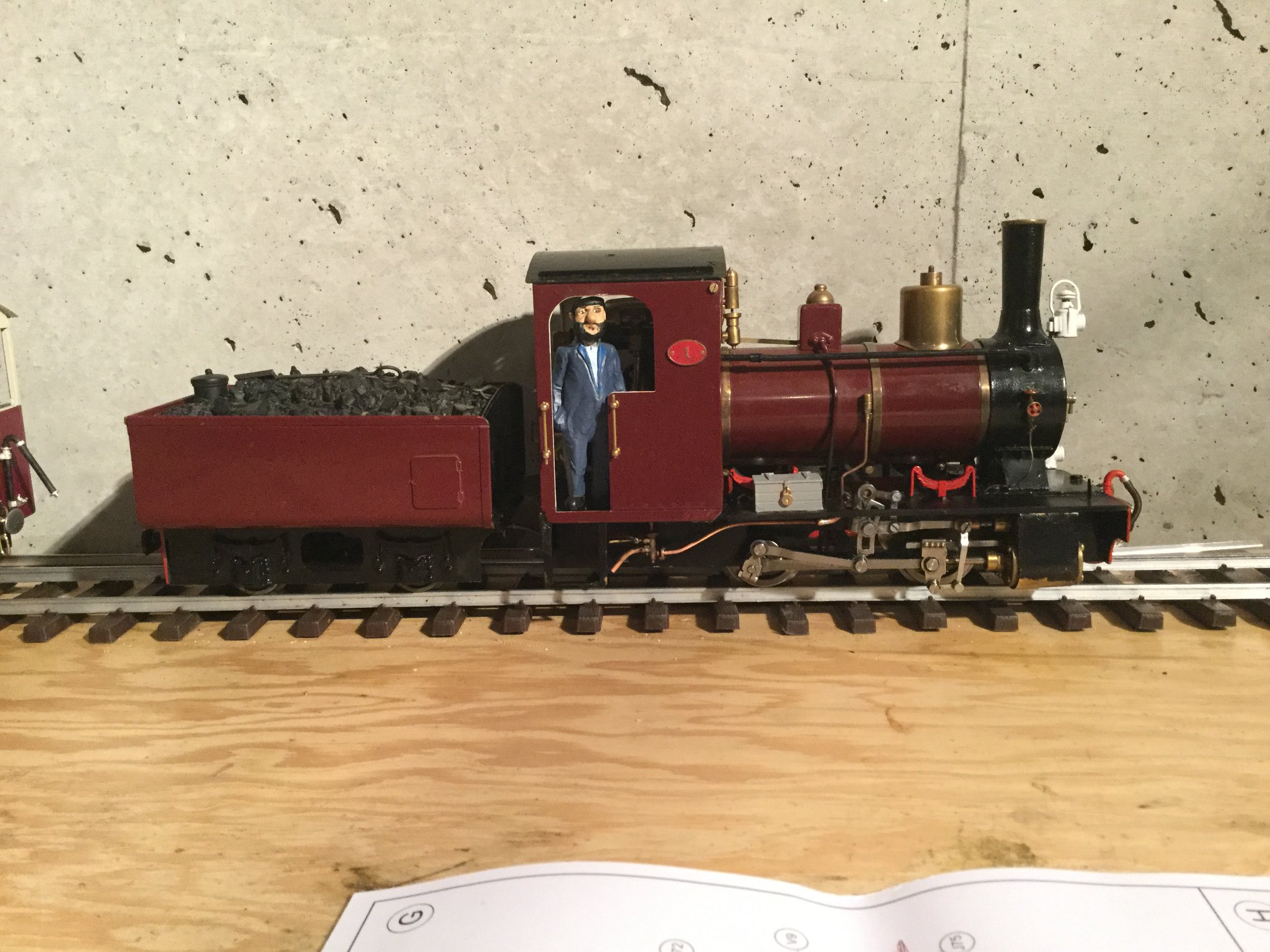 I don't know how much interest this will garner, but I've finished working out how to apply this particular detail to my "Billy", and have officially used up all the detail bits I binge-purchased at Peterborough in 2017.

I made the hose connection to the tender out of some silicone fuel tubing for model aeroplanes- I simulated the ridged rubber look by overlapping small sections of heat-shrink electrical insulation and then heating it over a flame to shrink and form the "u" shape. Although it's a bit over-scale, I think it does the job nicely. At first I thought this "injector" detail might be a trifle overkill for this model, but now it's finished I think the tender always looked like an unnecessary afterthought, wheras now it looks like it's part of the locomotive, as it should be.

I thought someone might appreciate my idea for making realistic-looking rubber hoses, too. If this was a coal-fired engine with actual water in the tender, the hose would be fully functional and look a mite better than a plain silicone tube. 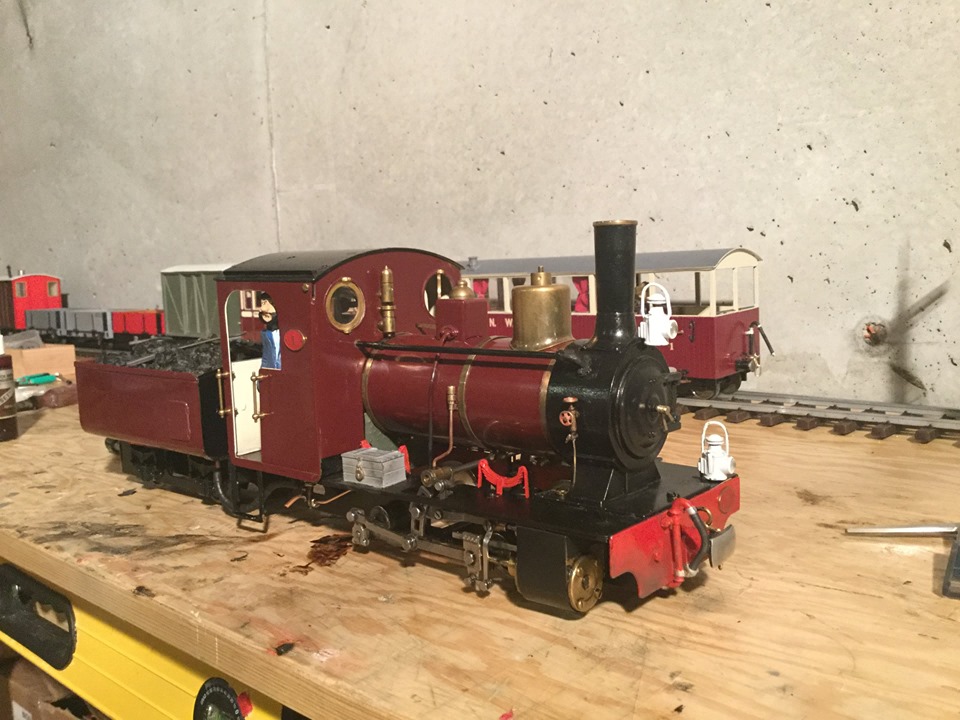 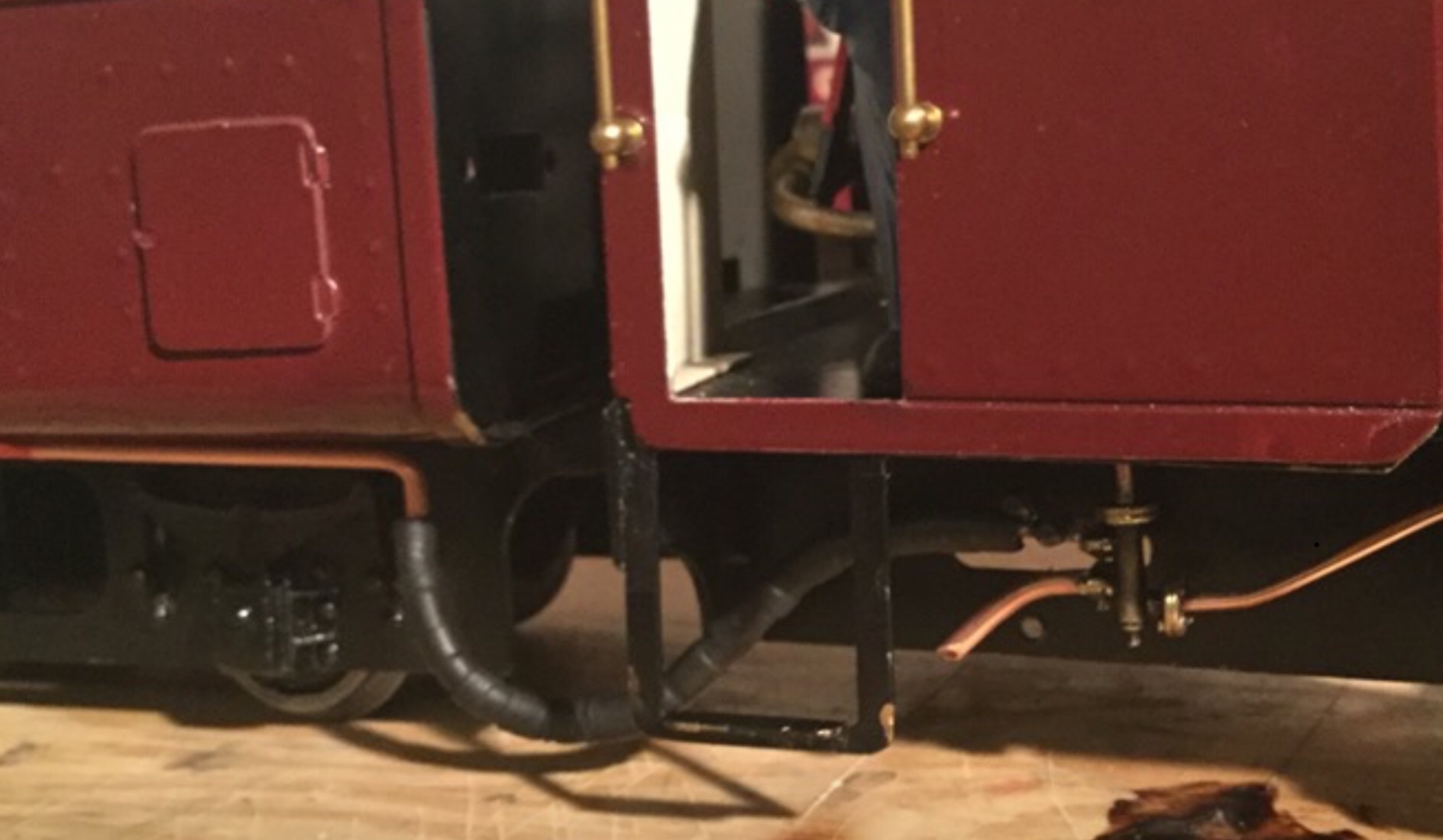 No, I've never tried solder paste, although I've seen it on videos I've never seen any for sale in any shops around where I live. Definitely sounds convenient. Through working on these little DJB injectors, I've got a little better at soldering. I managed to solder collars and threaded bits onto the "steam" pipe that threads into the cab floor and keep all the other pipes soldered on while doing it. It was tricky but I used little metal clips to act as heat-sinks on the joints that were already made, while doing each other one. I have alternately almost mastered soldering for various projects, and then promptly forgotten everything, about three times in my life. I don't do enough of it to remain proficient. Some day I would like to make a boiler, though, so I had better try to remember!

I also thought of using springs for the hoses, but I couldn't find any good ones, and also I like how the rubber tube can push onto the copper pipes and be easily pulled off if the engine and tender need to be seaparated.
Top
Post Reply
7 posts • Page 1 of 1