JMORG wrote: ↑
Fri Jun 21, 2019 5:19 pm
Looking great Andrew.
I promise to do a historic NWNGR/WHR photoshoot tomorrow for everyone on this forum!
What red are you using for the waggons? I'm using the light grey for some WHR wagons but I want to do some in the red as a difference.

Looking forward to the pics!

I'm not at home at the moment, will check paint colours when i am. I'm going to change the red I use for WHR wagons though - I'm using the same stuff but it seems the formula's changed. It used to be a rich wine coloured red, but now it's much brighter, as seen in the photos. That's fine for one or two wagons, I don't suppose there was much consistency on the real thing, but I'd like the overall impression to be of wagon in the deeper shade... That said, I thought I'd do the next wagon (likely to be another open) in grey for variety. Then a brake van, which seem to have been red with grey ends, most unusual...

My railway's been in such a mess for the last few years that all passenger services have been suspended. With long overdue track work finally bringing it back up to scratch, my thoughts are turning to passenger carriages again.

My WHR Summer Car left the works a couple of years, but was almost immediately withdrawn from traffic because it couldn't survive a trip up the line without being dragged over sideways by the "bowstring effect" on the sharper curves. This weekend I've set about trying to cure that, starting with moving the bogies further towards the end of the vehicle to reduce the swing on the couplings. Then I added some weight underneath in the form of this 6" long, err, thing:

I don't know what it was attached to, where I found it, or who "Woods" were, but the carriage was made in Bristol (my version that is, not the Mancunian original), so it seemed appropriate.

Here it is on test an hour or two ago: 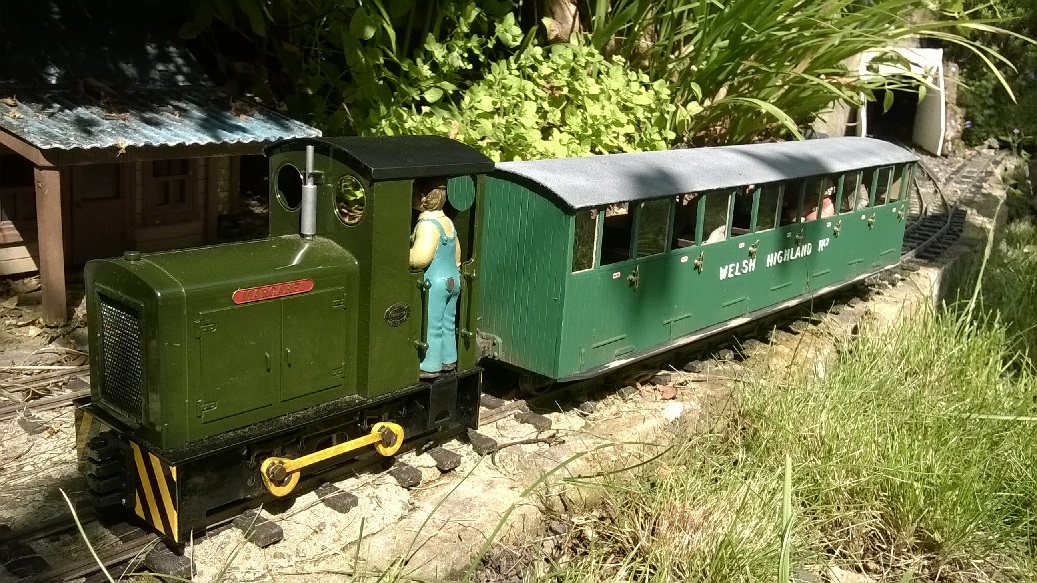 I added some wagons to the back of the carriage and trundled it round a couple of curves, and it's looking good so far, no bowstring, although a full rake of carriages at a slightly higher speed might be a stiffer test. It still needs its couplings lowering, they're a little on the high side, but that's probably going to mess up the ends of the carriage, so if I can I'll enjoy running it for a while before undertaking that work.

Testing revealed a further problem with derailment, most unusual for my stock with Big Big Train running gear, such as this one. The cause turned out to be a non-standard wheelset which had been switched for one of the originals before I acquired the donor (BR Mk2) carriage. That's been cured for now by swapping it with one from the Gladstone Car, but I'll need to get hold of another. Fortunately, they crop up fairly frequently on eBay, even if they are horribly over-priced.

That's all for now. Still too hot in the garden, so I might crack on with some strapping for my WHR wagons...

My 23 has the opposite problem; tips over everything in front of it (annoyingly including the Toastrack).

As promised, pictures of some of the freight wagons:

Yes Beddgelert has arrived! The overhang is incredible, no bogie carriages can be run immediately behind this locomotive!
Not seen on this forum before are the two NWNGR coal wagons; modified IP (front) followed by the first Jurassic. Another is currently unmade, will likely be finished as a NWNGR wagon.
The Hearse is a standard Timpton with IP buffers. 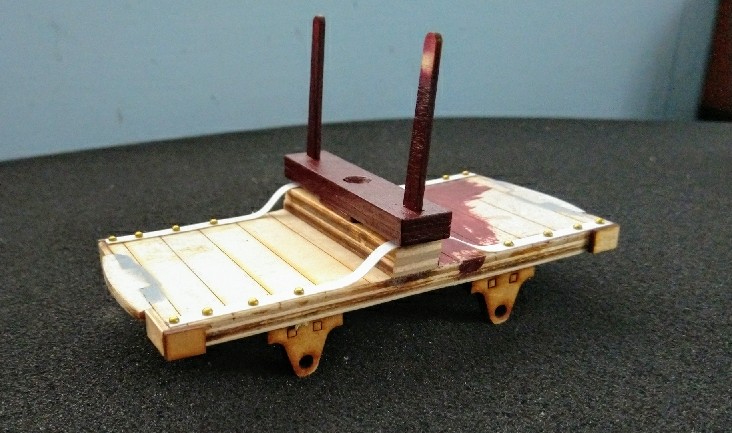 One of two bolsters, as seen at Dinas. Modified Lineside Hut. 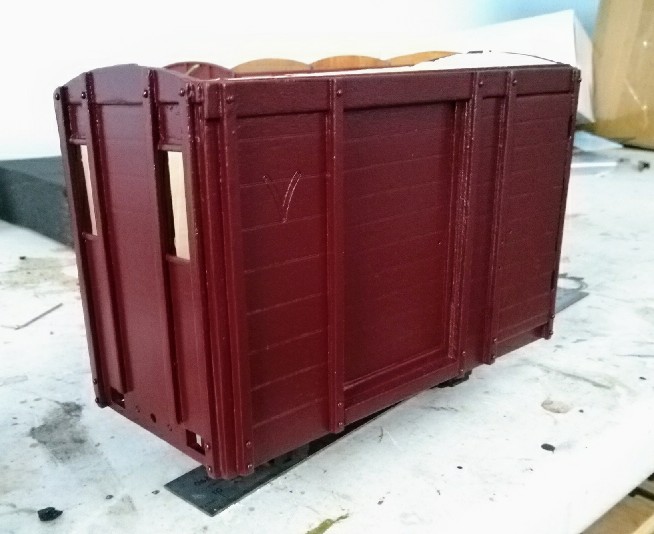 Jurassic NWNGR brake van. This one became the unumbered WHR van and differed to number 2 in lots of details.
Lots of slate and flat wagons (The Lineside Hut) to be started.
Also for modern WHR: 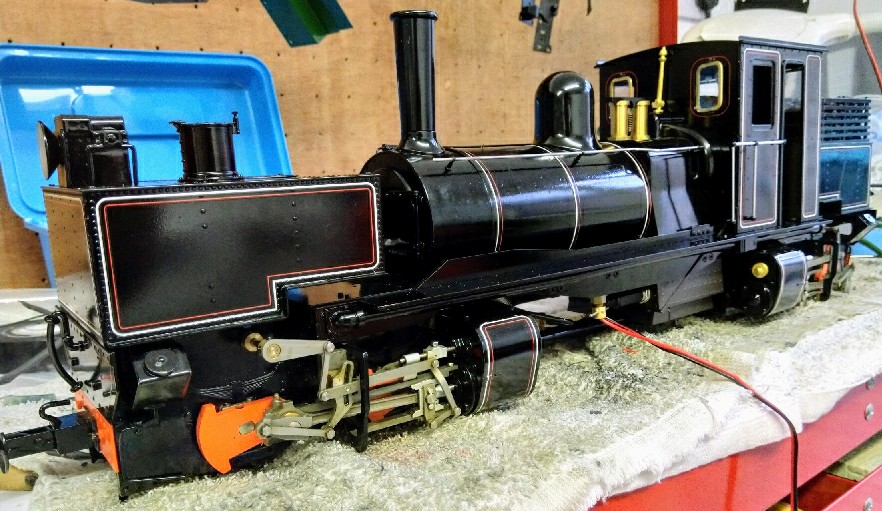 K1 will compliment the 138 and the rest of the LVLR Garratt's nicely.
Limitations only exist if you let them.
Top

Thats a great photo Andrew, it does blend in with the scenery. I have a coach that does the exact same thing, it does not like curves one bit..
Rod 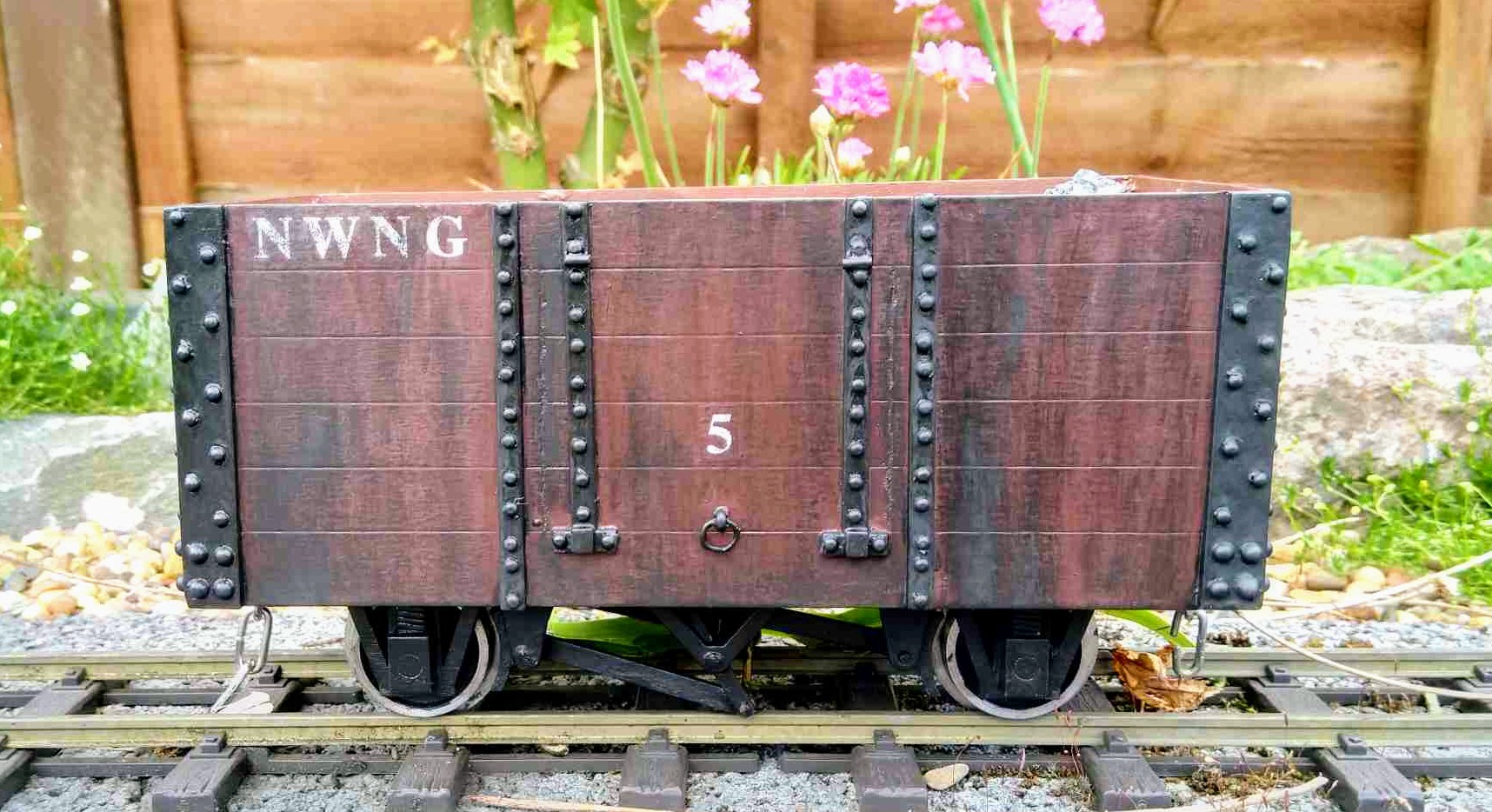 IP wagon. Modified by removing a plank from the top... 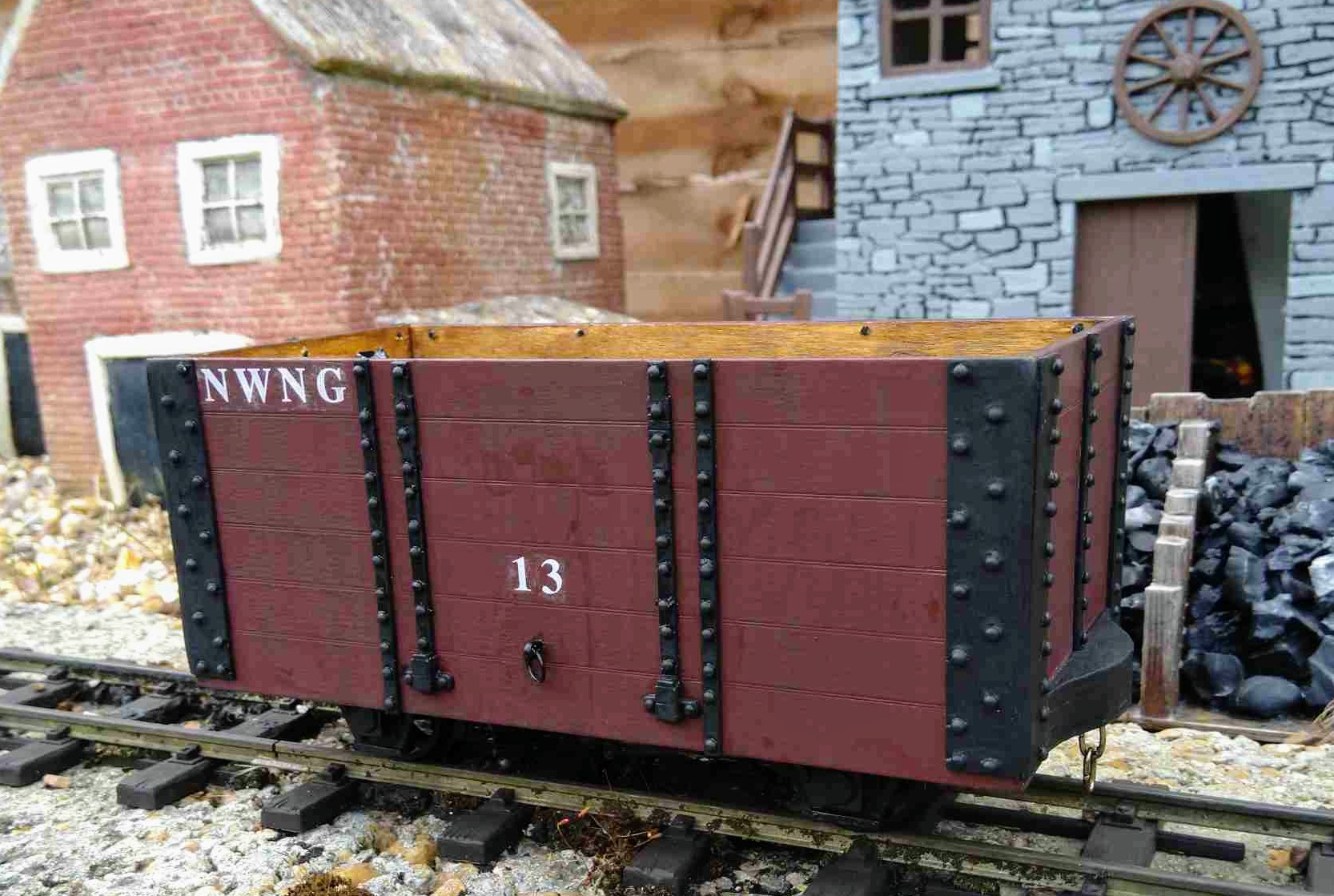 Jurassic. This one has been recently overhauled hence the cleaner body.
Limitations only exist if you let them.
Top

The wheel rims painted black would finish it off nicely.
YouTube Channel
Top

Lovely looking wagons, nicely weathered. The brake gear looks good too. Does that actuating arm make contact with the rail? If so, it's very nifty - double-acting

Nice wagons! I particularly like the brake van, I must crack on with building one of those. Good idea for the timber bolsters too...

"Beddgelert"'s a beauty. Shame about the overhang thing though, which must be a pain - you need some NWNGR 4 wheelers to run directly behind her. I might cut some more parts for some at some point, I'll let you know if I do...

Fantastic thank you Andrew!
Limitations only exist if you let them.
Top

A little more progress on the latest WHR wagons this weekend, with the strapping I made a month or so ago painted and glued on: 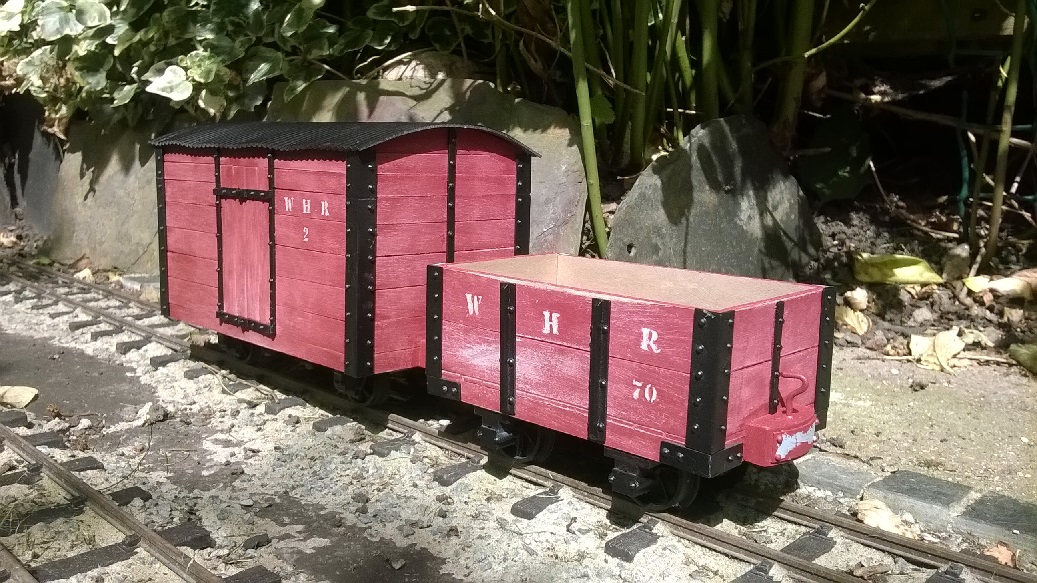 Nearly there with these two - brake gear and a couple of other details to add, then some weathering so that the ironwork doesn't contrast quite so much with the faded and peeling woodwork...

I think I'll do another small open next - I'm pleased with how this one's looking and have created an extra batch of ironwork so it shouldn't take too long.

Thats my next build a couple of open wagons and maybe some flats....
Rod

The two current wagon projects, the WHR van and open, have almost reached the finish line this week. Having received final details, including brake gear, they've now been weathered too, apart from a few rust streaks and patches here and there. I don't seem to have the right colours of paint for that at the moment, but they've entered service anyway - the rust will catch up with them at some point. Here they are posing in the garden earlier today: 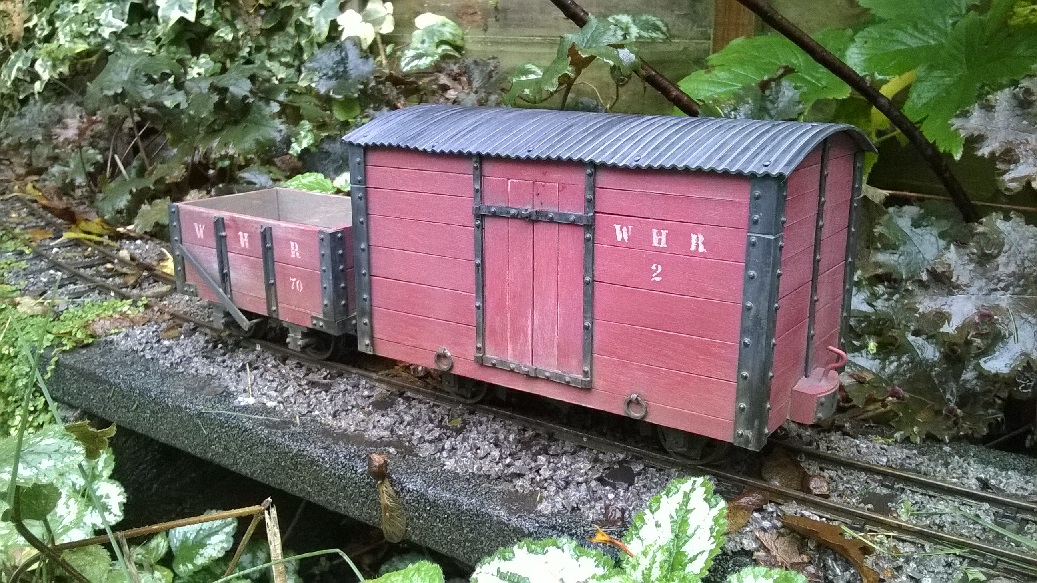 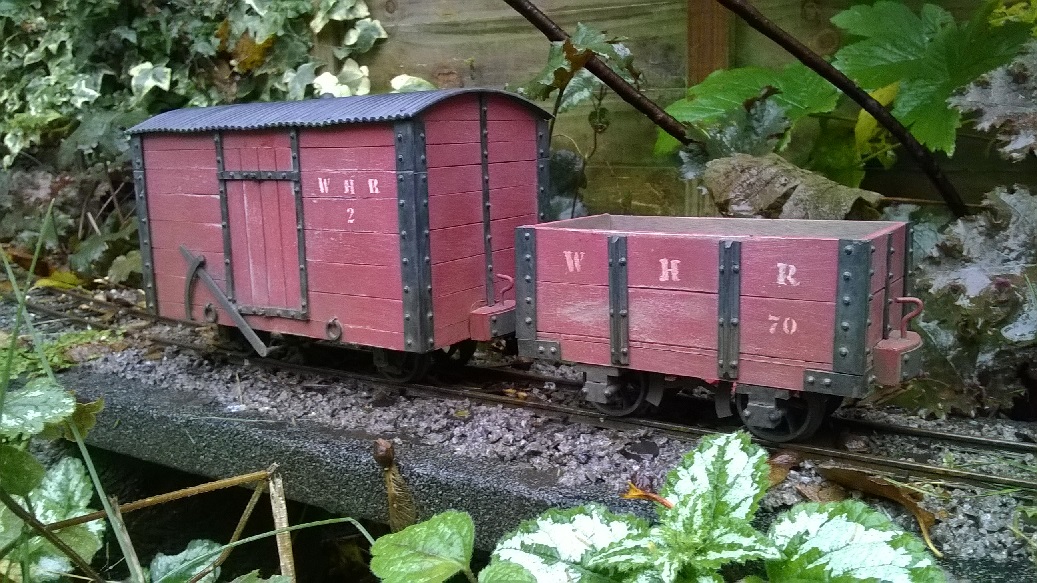 The open's a rather nice size, fitting nicely between a two-ton slate wagon and the larger WHR vehicles.

The brake handle on the van's made up. Until recently it was thought that there were only doors on one side of these vans, but analysis of photos now suggests otherwise, so I've adapted the brake gear to fit...

I'm not at work today and had planned to run a goods train with the new wagons this afternoon, but the weather's not really obliging, so I started work on the next open instead, cutting out all the various planks and other parts: 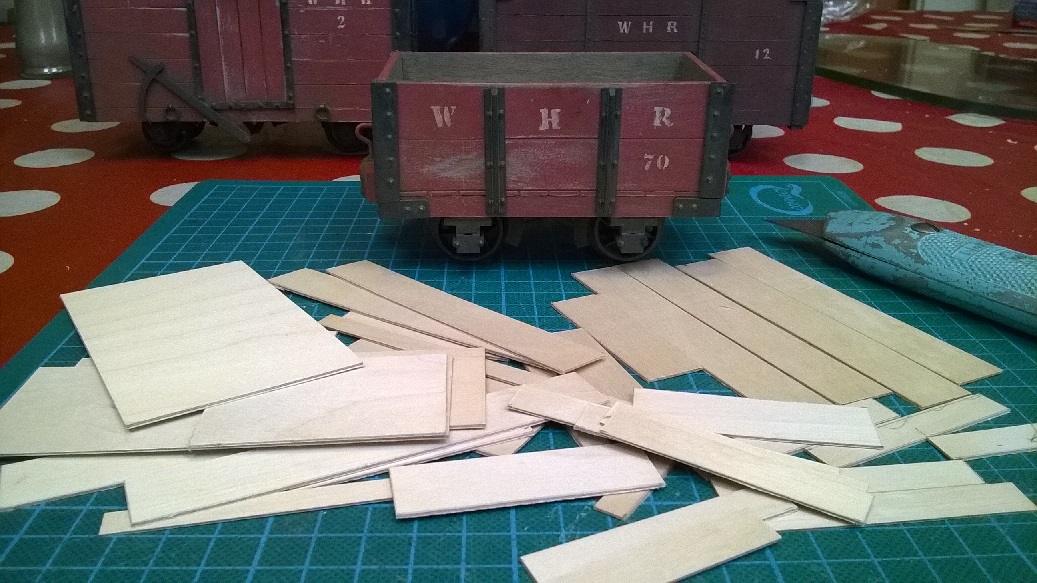 I like the effect of individual planks, but it is tempting to glue together 5 bits of ply and be done with it! I've painted the parts that will form the interior with the usual vinegar and wire wool solution and am currently waiting for them to dry.

The weather's looking up little now, so I might just get outside later - everything's looking awfully wet out there though...

Individual planks do look good, but you could try putting a piece of thin card under the end of a few planks so they sit at a different level, or even between the edge of one or two to accentuate the gap. The van and open certainly look good to me, I always think that as far as weathering goes "Less is often Best".
Grant.
PS hope the weather does allow you to get a run.
Top

Great looking wagons. At least you (and we) will know the planks are individual!

My lawn is like a sponge to walk on. I can only remember one occasion previously when it's been as wet for so long.

Andrew, I love them. Just such brilliant builds. The corrugated roof on the van is perfect. Is it metal ....

Where do you source your ironwork from please.
Rod