Many of us start off putting a camera on a wagon in front of a loco and getting a so-called driver’s view video.
But after progressing from that, I always wanted to get a driver’s view from INSIDE the cab of a steam loco. But without much success because normal cameras don’t fit in the cab.


My first attempt was to put the camera on the tender coal load, which wasn’t too bad. See this video..
https://youtu.be/0heNzK-dWRU?t=26

(It was, I think, the first video I ever put on youtube.) 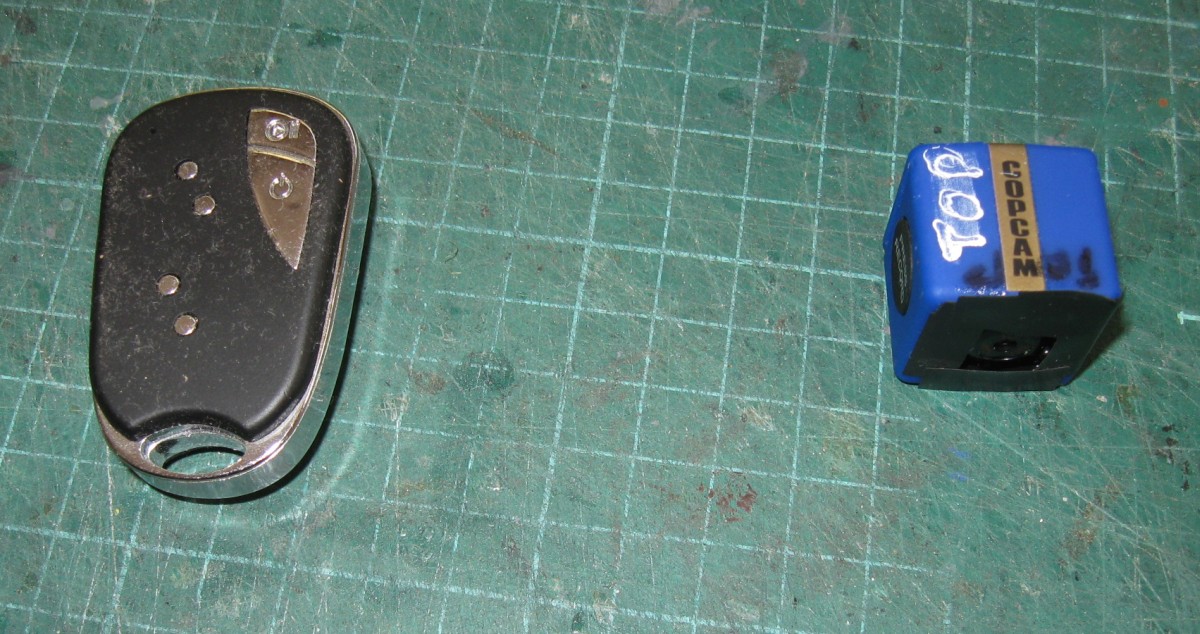 But it seems that it is impossible to get the inside of the loco cab in focus as well as the longer view ahead.

So I gave up for years. Then recently serendipity cut in. A mate was experimenting with periscopes on cameras and using pinholes. So I was again a bit interested in cameras. And, I was using a loco I don’t use often and noticed that unlike all my other locos, I had used just a 3 wire connection between tender and loco with ‘servo type’ JR plug/socket. (the loco boiler houses the RC receiver and ESC while the tender has the battery and sound.)
As I had plenty of servo extender leads I realised I could separate the loco and tender, put a wagon between them for the camera, and connect them with the servo extender lead, and still drive the loco.
So a quick lashup like this was used to test the idea.

Having run a few sequences along the track, I found that my 12 yr old camera gave better focus of both the cab insides and the passing scene. (but it is only 640x480 pixels video). But the view of the cab was a bit ‘static’ Then I had the bright idea of mounting the camera on a ‘turntable’ moved by a radio controlled servo. That would give me the option of varying the pan of the camera from straight inside the cab to a more sideways view. I needed to add a 2.4 GHz receiver and 6V battery on the flat car, with the Rx bound to the same transmitter as the loco control.

So the following video shows the promising results. I stress that this is just an experimental video – not a final ‘take’. That will come later when I get my buildings out and the sun isn’t so bright.

The problems to be solved/refined are
to find the best compromise between focus inside and out of the cab. Is ‘macro’ better than normal setting? and
to reduce the ‘jerky’ panning movement which I think is due to flexing of the camera’ turntable.
Greg from downunder.
The Sandstone & Termite's website: http://www.members.optusnet.com.au/satr/satr.htm
Top

Looks good.
I have fitted a micro camera in the cab of a gauge 1 0-4-0 steam loco.
The camera looks throught the spectacle plate.
The view shows a bit of boiler on the left side.
Looks good when running backwards and the smoke comes down behind the loco.
Faantastic view when standing in the shed running the smoke set at full power.
Top

Greg, that is excellent love the "panning".
http://www.tumble-down-falls.co.uk/

Great! I do admire your willingness to explore the potential of new solutions.

Scrat wrote: ↑
Tue Jun 23, 2020 10:04 am
Looks good.
I have fitted a micro camera in the cab of a gauge 1 0-4-0 steam loco.
The camera looks throught the spectacle plate.
The view shows a bit of boiler on the left side.
Looks good when running backwards and the smoke comes down behind the loco.
Faantastic view when standing in the shed running the smoke set at full power.

I'd like to see that video. I have always wanted to achieve that. But the tiny cameras I used wouldn't focus close enough to see the boiler.
Greg from downunder.
The Sandstone & Termite's website: http://www.members.optusnet.com.au/satr/satr.htm
Top

as I failed to upload the videos, here are two stills from one of them: 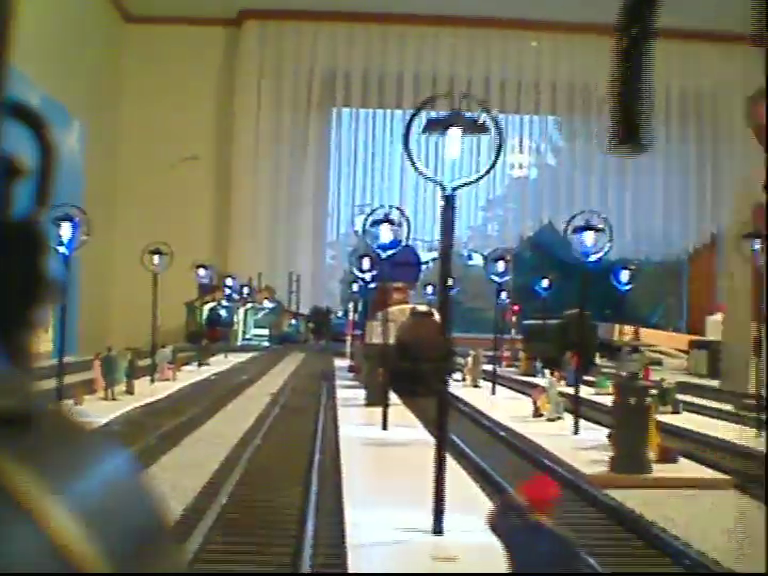 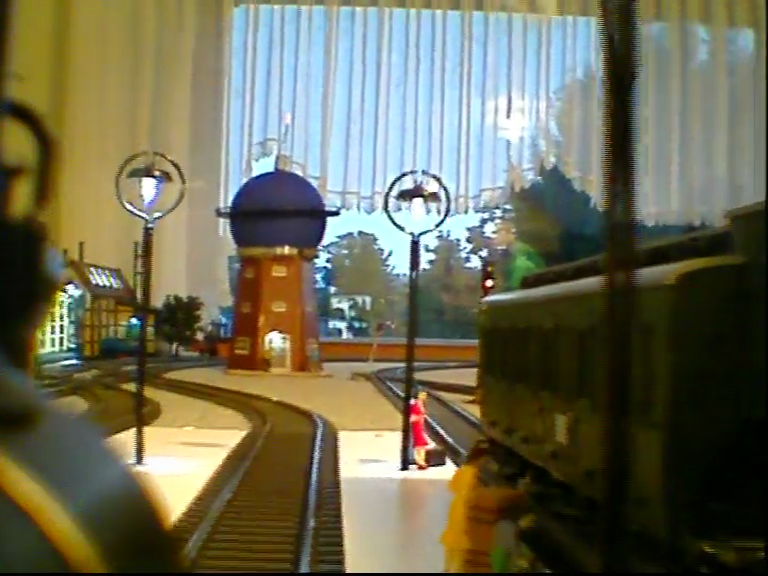 Of course, they are taken from a running loco and there is some moition blurr.
The boiler is not vcompletely in focus. I chose to live with this and have the "far end" of the drivers view in focus.
Then passing the shed one can clearly see the scale apples on the tree.
Top

Brilliant experiment Greg. It's just like us passengers watching out of the windows in carriages.
No doubt in my mind that you will solve your little problem, for you anyway. Really looking forward to seeing more of them.
Rod

Nice pics Scrat.
Here's one I tried from my Garratt - the nice long boiler allows it to be more in focus. 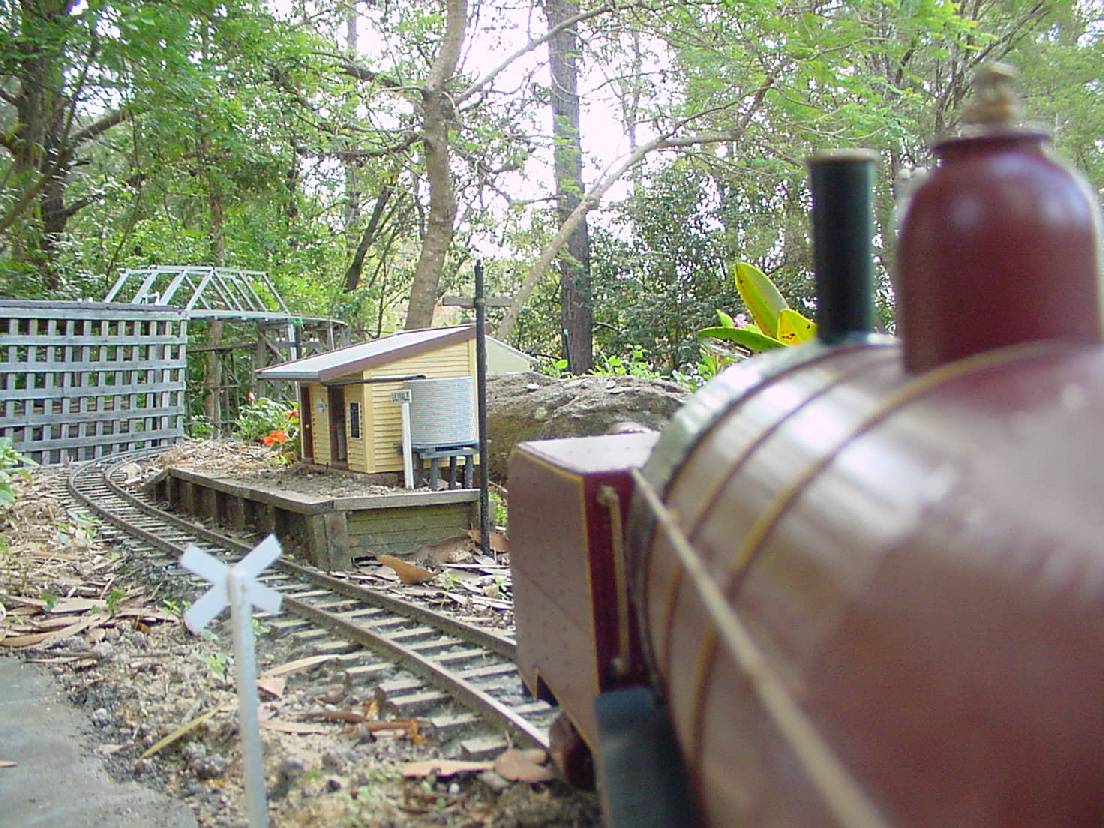 I think macro setting would probably give you good focus in the cab, but out of focus at distance, because it's intended for close up shots. What you are trying to achieve is called hyperfocal distance. I think I understand the method, but I'm not sure it's achievable at the close distances you are working at. You would probably need to use your camera in manual mode, if that's possible, and set it to as narrow an aperture as possible. There's more information on this blog https://photographylife.com/landscapes/ ... -explained
Phil

Thanks for the link Greg, very interesting. I too abandoned my attempts for an in-train camera for some years, as the camera I got from Maplins was too low res and wide-angle. Also the noise of the servo was dreadful transmitting to the camera through the mount. Interestingly you don’t have such a marked problem with that; in my case it made the footage unwatchable.

However seeing your success has prompted me to dig out the box in which my project languished and have a re-think. I post separately as the project is a sufficiently problem to the one that you solved so well.

Thanks for the inspiration.