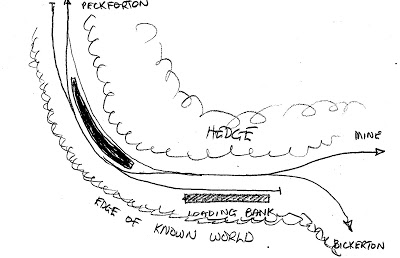 The main problem with the station from a modelling point of view was that its two sidings were to the front of the station - ie on the viewing side. Whilst this made shunting easier, it meant that it wasn't possible to model any lineside industries on the sidings - there simply wasn't room! So, I bit the bullet and decided to revise the layout to add a new siding to the rear of the raised bed, thereby providing an opportunity for a half relief building to be positioned behind it. 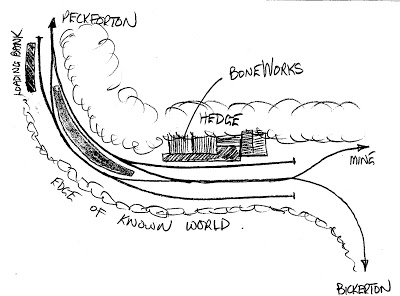 So, I set to work, and after a bit of fettling, the layout has been revamped. 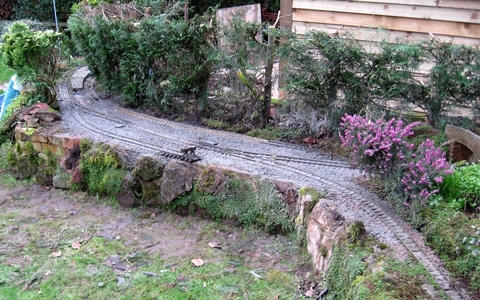 Nice work Rik. The new siding looks like it's always been there!

Wonderful job Rik, I'm sure your creative skills will soon make the site a useful addition to the timetable with related stock shunted into the various sidings there.
Unless I'm mistaken, Summer seems to have arrived early in Cheshire!
The best things in life are free.... so why am I doing this?
Top

Rik, on your railway, sidings are for shunting on as you have the ultimate slow and detailed control of your locomotives, unlike many other 16millers who have other priorities. Look forward to seeing those sidings being used as you've designed them. Great stuff.
I'm looking forward to racking your brains again when I get round to building myself some battery powered steam outline locos that will need RC.
Regards
Andy McMahon

What a brilliant improvement Rik, really looking forward to videos of it in operation.

Still in Winter here, with constant rain. It's stopped the son-in-law laying the flags for 4 weeks now.

Thanks folks
Yes, looking forward to the next running session. I'll need to amend the freight management program slightly to generate slightly more diverse traffic to Bulkeley. Still not decided whether the new siding will serve a Boneworks or a Brickworks. A Boneworks will provide more opportunities for traffic in as well as out; I assume a Brickworks mostly just had outward traffic.

These two industries used to be adjacent to each other in the locality of my hypothetical railway, so I can claim a precedent (Beeston Castle is just behind the chimney in the first photo - http://www.tattenhallhistory.co.uk/tatt ... boneworks/ )

Amazes me how you managed to get out and do all that at this time of year! Looks to have been worth it though, well done.


Mostly outbound obviously, but also coal in to fire the kilns.
On Grafton (P4) which had a branch off the MSWJR main line, serving Dodsdown brickworks, we used to run 5 empty brick wagons plus two loaded coal in, and then 5 loaded bricks and two coal empties out. Plus you can add the odd additional van or open with timber and anything else you think the works might need.
Philip
www.tinyurl.com/philip-trains
Top

Brickworks were usually located close to their claypit, but they used a lot of fuel, so unless there was a coal mine on site that presumably had to come in by rail.

There's also scope for a small tramway, or a rope haulage, to transport the clay from the pit to the works.

It would be a fair bet that the locals would be much happier with a brickworks as a neighbour. How are you planning to provide the correct ‘ambience’ for a boneworks?

GTB wrote: ↑
Sun Feb 02, 2020 11:25 am
It would be a fair bet that the locals would be much happier with a brickworks as a neighbour. How are you planning to provide the correct ‘ambience’ for a boneworks?

I think I'll pass on creating the olfactory element of the Boneworks. Here's an extract from the recollections of a local resident


The stench from the Boneworks – don’t mention it – I can smell it now. It always smelled, our bungalow was right opposite – it was worse in the summer months. There was a big manure heap with elephant manure from the zoo. It used to come in off the railway and was brought by a horse and cart and was dumped right in front of our bungalow. The bones came in the same way and they were all piled up

Another local's recollection of the Boneworks.


I got to know quite a lot about the Boneworks when visiting my grandfather at the site. Bones were brought from the abattoir to the Boneworks by Bill Kinsey, a Tattenhall haulier. During the war years, when he carted the bones through the village, the residents complained of the quite dreadful smell, following which a tarpaulin was used to cover the bones. The bones (and flesh) were stored in the ‘Cracker’ shed and local fishermen used to come down to the shed for maggots. The bones then went to the industrial grinder known as the ‘Hummer’ (so called because of the noise that it made) which created a jelly-like substance (gelatin). The gelatin came back in pots and could be sliced, not unlike a loaf of bread. My mother and Aunt Molly then carried the trays (on which were the large slices of gelatin) to the kilns/cubicles where the gelatin was dried. Coal for the drying kilns was brought in by barge using the nearby Shropshire Union Canal. Effluent from the yard ran into a ditch near the road. It was said that you always knew when you were approaching the Boneworks, even in foggy weather, because of this ‘stinky ditch’!!

Good work Rik, and the references to local history help to bring the project to life. Be interesting to see which option you go for. I also like the detail on your sketch plans - 'edge of known world'

So much space to play on your railway Rik.

I would of loved to have created a similar layout as live steam with a Slomo allows for operational running just like you do with your electric locos.

Looking forward to a video of it all in action soon!
YouTube Channel
Top

You'll remember that the new siding at the front of Bulkeley was left in a somewhat precarious state: 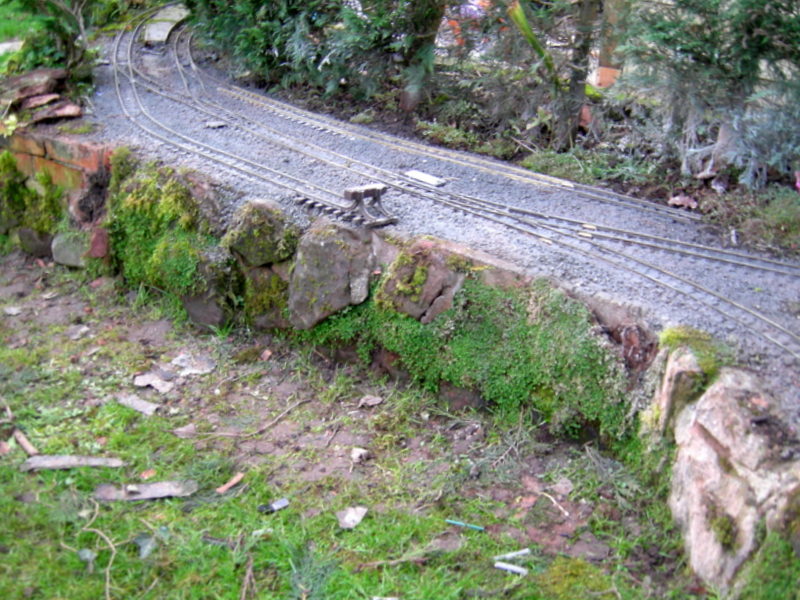 .
Time for a bit of landscaping. First of all the sandstone cladding was removed from the old wall - leaving the siding in an even more precarious position. 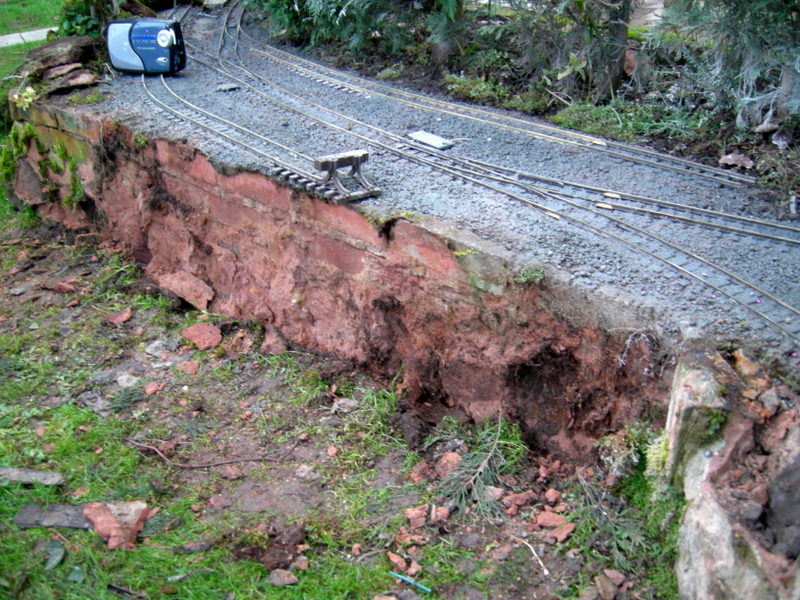 .
Then a new wall was constructed. I decided it was far too complicated to try demolishing the old wall. 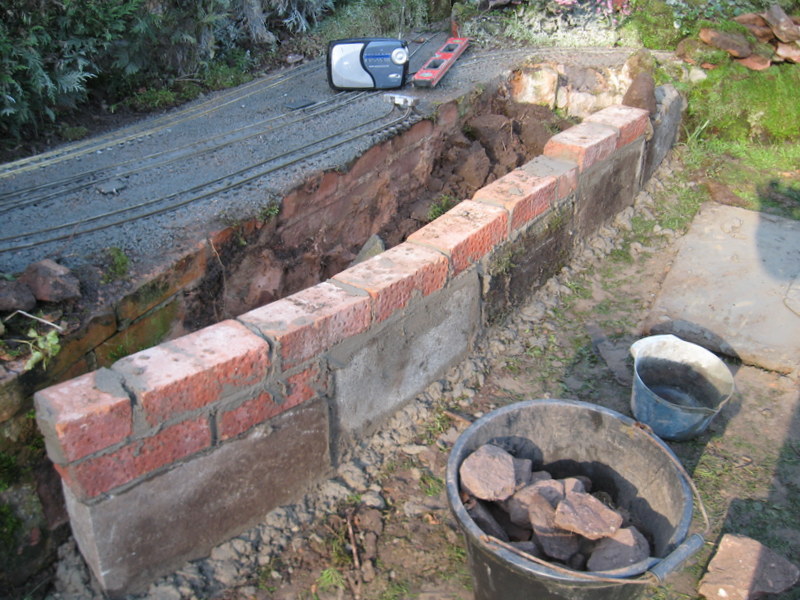 .
The space between old and new was then filled with soil. Fortunately, I'd just dug a soakaway for the guttering from the new workshop and so had almost exactly the right amount of soil to spare - coincidence, rather than careful planning! 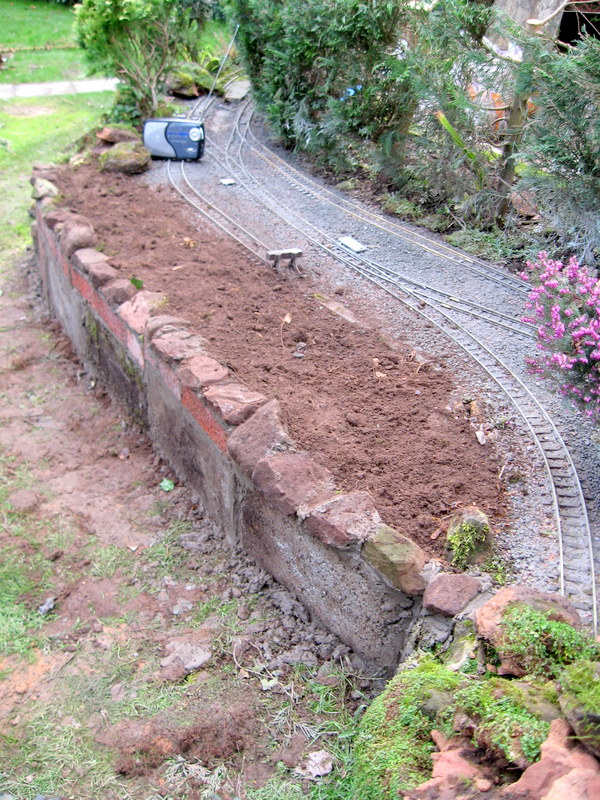 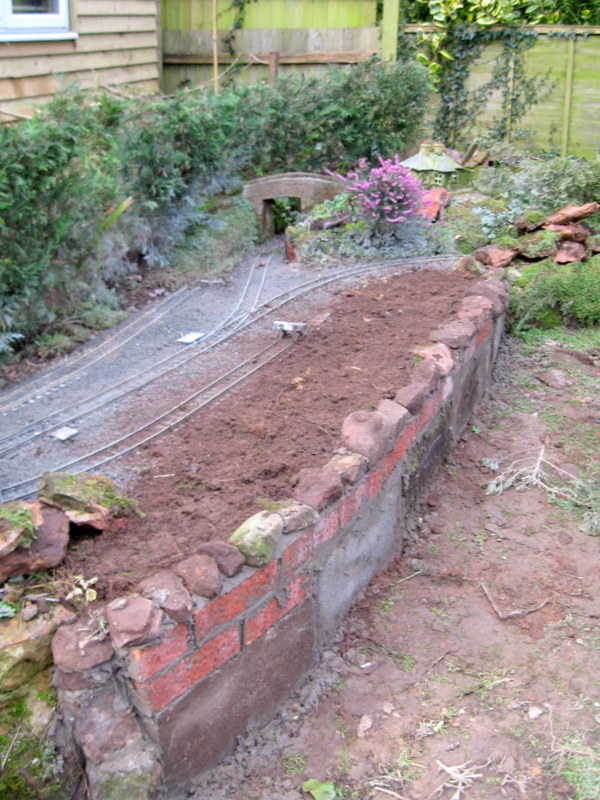 .
I am now in the process of cladding the new wall with sandstone. Unfortunately, Storm Ciara intervened and so I've not been able to finish that job. 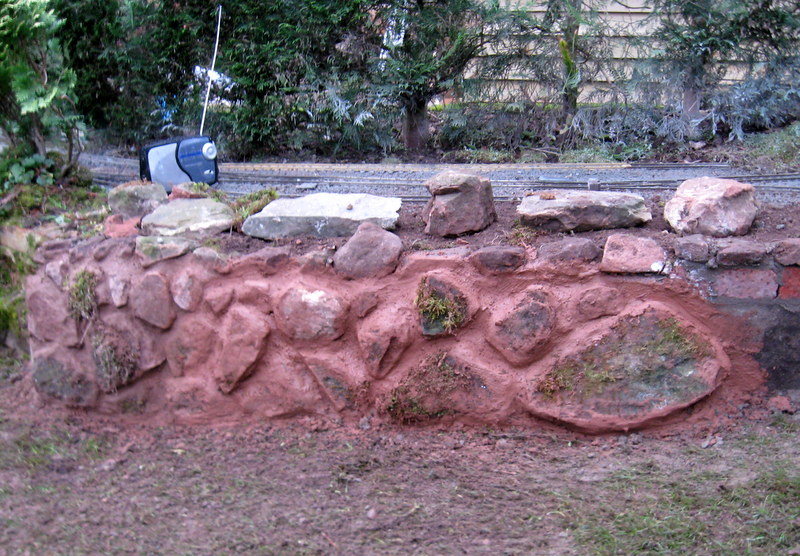 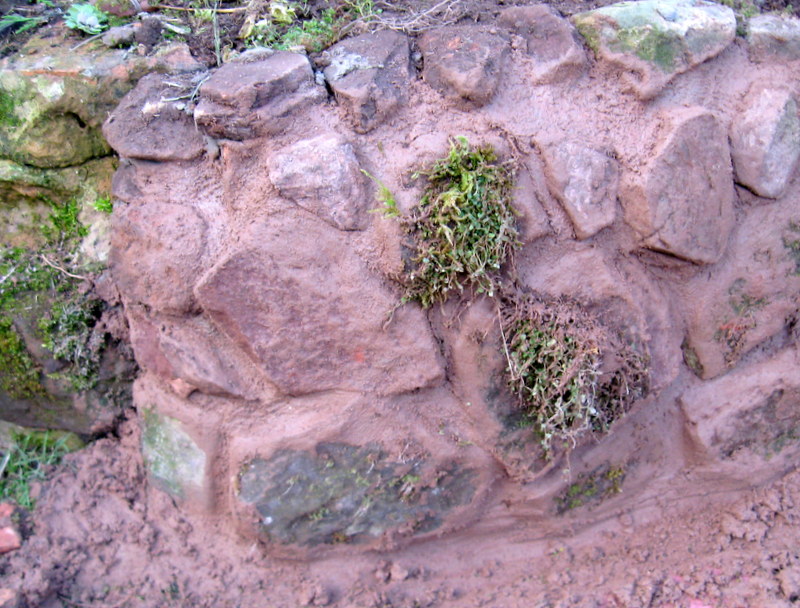 .
Apologies for the blurriness of some photos - but it was starting to get dark when I took them.

Next job will be planting the new bed and maybe thinking about some sort of facilities for the new siding.....

Good work Rik, nothing like that would be possible in this area with the current weather conditions.
The best things in life are free.... so why am I doing this?
Top

This will be a lovely rustic station area. I do like the bridge, and is that a charming wee cottage I spy atop the rockery.
Top
Post Reply
32 posts