A place for discussing battery-electric locomotives, whether they're diesel, steam or even electric outline
Post Reply
8 posts • Page 1 of 1

It seemed like a good project to make with polystyrene sheet, which I haven't used for a while, so a set of wheels were turned up early this year during a lull in track construction. Building an IP kit might have been easier, but this cost a tenth of what the kit does and can't get lost in the mail.

The model is based on the well known Tralee & Dingle railway Inspection motor, which was built on a Baguley chassis in 1922 and powered by the drive train of a 1922 Ford Model T (or maybe a Ford TT truck, the sources aren't specific). I've changed/added a few details to make it a little more Australian and it is built in 15mm/ft scale.

The model drive is the same as that fitted into the recently built gang motor, a small 6V motor with a 60:1 reduction gearbox and bevel gears on the drive axle. This time around there was space for two more batteries and the wheels are larger, so it can manage a scale speed of 25mph, about twice the speed of the gang motor. It will easily haul a small mail/luggage van if needed.

I learnt the hard way not to trust plastic for scratchbuilt chassis work many years ago when working in HO, so this model has the gearbox, chassis rails and w-irons fabricated in brass for strength and stability.


Construction started in mid-July and the first photo shows the chassis structure assembled and screwed to the floor of the model. As always, I had run out of 60 thou. and 80 thou. polystyrene sheet, so the floor was laminated from two layers of 40 thou. 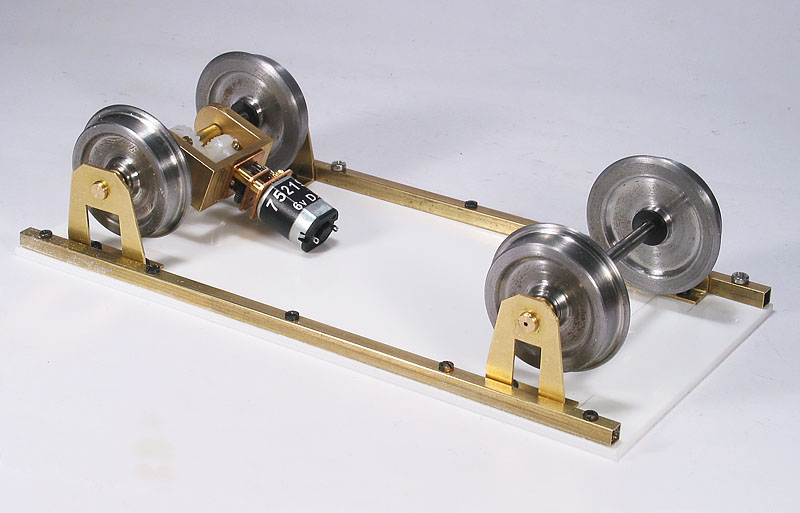 This assembly tested out OK on the bench using a HO controller, so the next step was to wire up the electric bits. The original intention was to fit it with a manual speed control, but in the event the simple on-off switch used on the gang motor was fitted. This photo shows it wired up and running, controls are from the left, reversing switch, charging socket and charge/run switch. 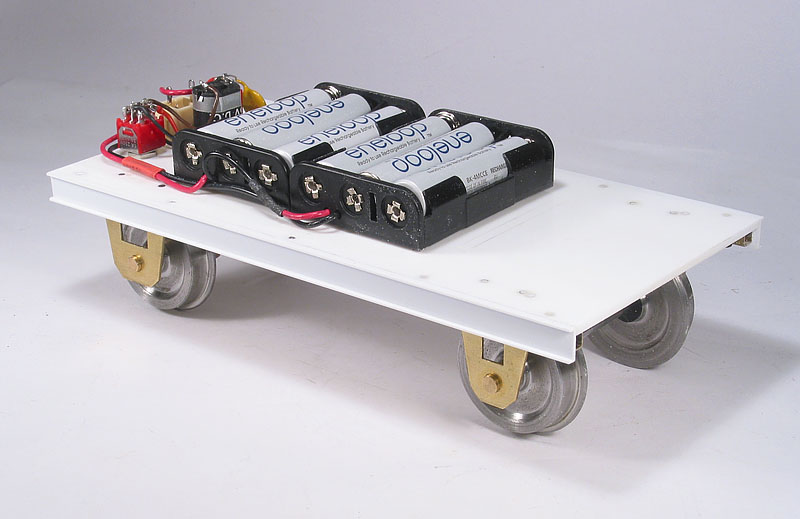 This was in the dead of winter, so most of it's test running was done on the hall floor, much to the ginger cat's disgust when he saw it. Even with no rails it runs quite straight, so I know the axles are installed square and parallel.

The cosmetic chassis and running gear was next on the list and this was fabricated in polystyrene, although the step supports are brass for strength. Plastic in this application wouldn't survive the first derailment, or the first hamfisted person picking it up the wrong way. 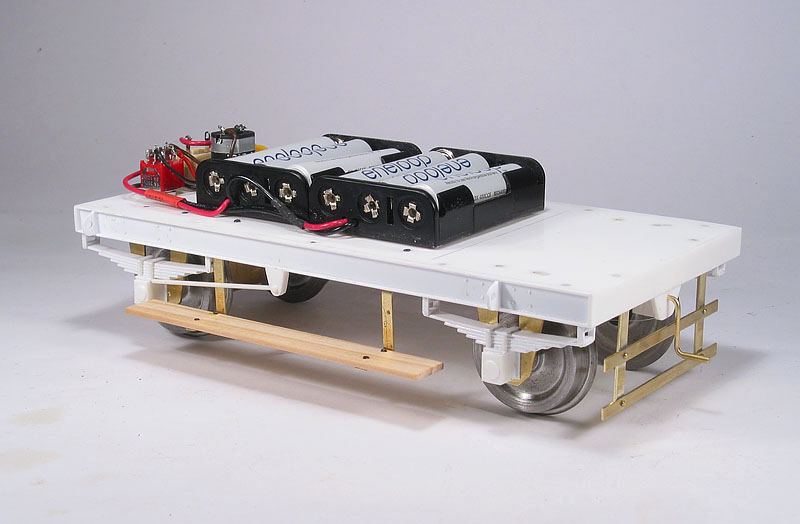 The next step was to make a start on the coach building work. The body is laminated, with an outer 20 thou. layer with the window openings and an inner layer of 40 thou. with larger openings, which form recesses for fitting the clear sheet for the windows. The radiator and engine cover were also formed by laminating sheet to form blocks that can be filed and sanded to shape. The photo shows it starting to look like a rail motor, rather than an electric skateboard........... 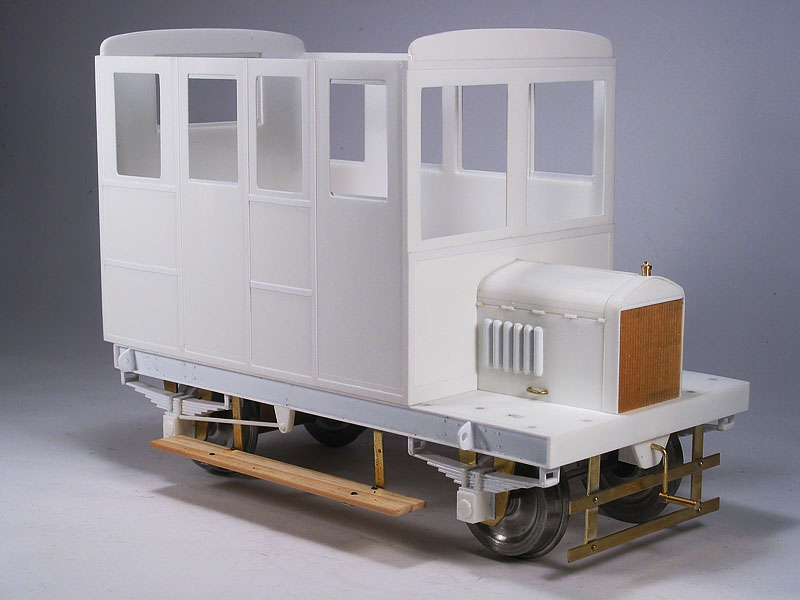 The engine cover was left hollow just in case I decide to fit a speed controller in the future. While I generally use MEK for building models from polystyrene sheet, the laminated parts were built up using d-Limonene as the solvent.


The interior was next, built up on a false floor fitted over the batteries. The seats were shaped from a length of wood in my usual fashion. I decided to make the seat backs pleated. After they were fitted, I found a photo of the original T&D motor and of course it was fitted with buttoned upholstery. I guess I'm lucky I'm not modelling the T&D. sigh........


The roof was the last major part to be fabricated. This was formed board by board over formers, the gaps filled with Squadron white putty and sanded to it final shape. It is held in place by a friction fit, just in case it needs to be removed. If I had glued it in place, I'd bet London to a brick that one of the windows would come loose. The photo shows the model more or less complete, although a few detail parts still need some work. 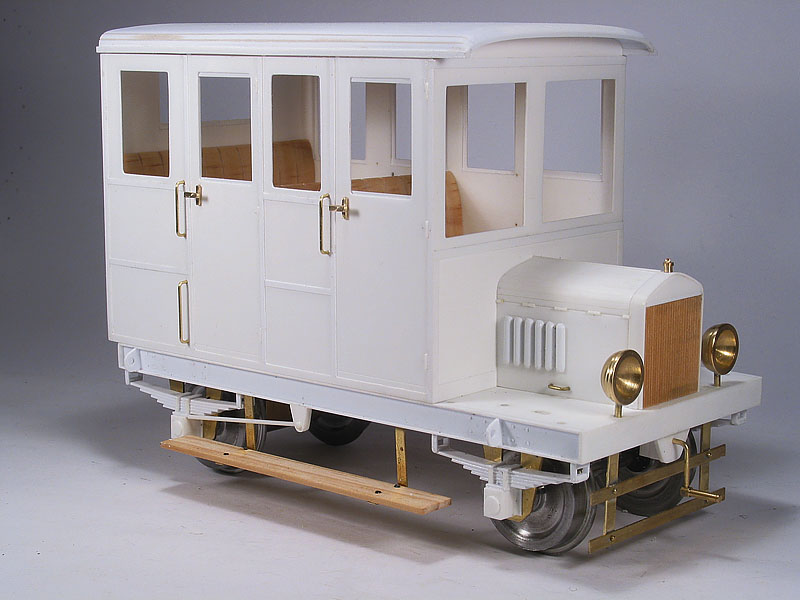 The ghost of rail motors past............. This photo shows the model doing track trials a couple of weeks ago. It's now spring and the rails are now dry, so the unpainted wheels won't go rusty after the run. 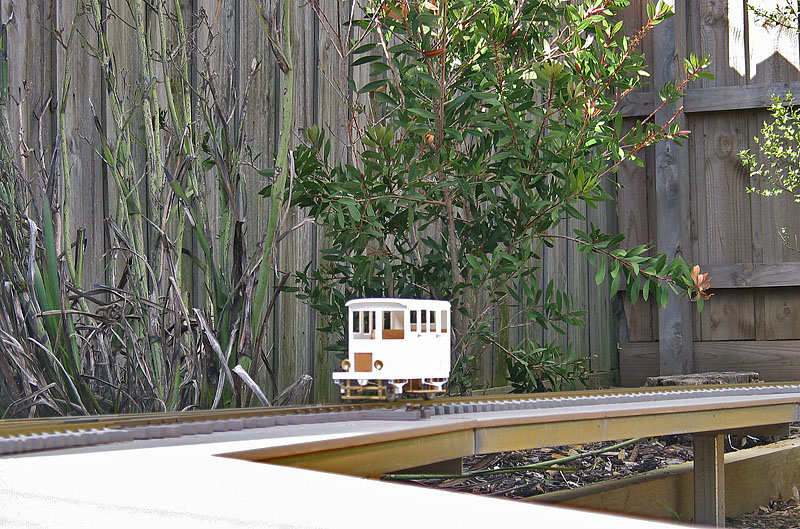 The model then sat in the paint shop queue while the little Baldwin was being painted. The colour scheme is based on that used by the VR on it's brad gauge AEC rail motors. The painting went well and the new rail motor sat for it's portrait today in the afternoon sunshine. The trailer from Motor No. 1 is standing in until I get around to building a bespoke trailer for the mail motor. 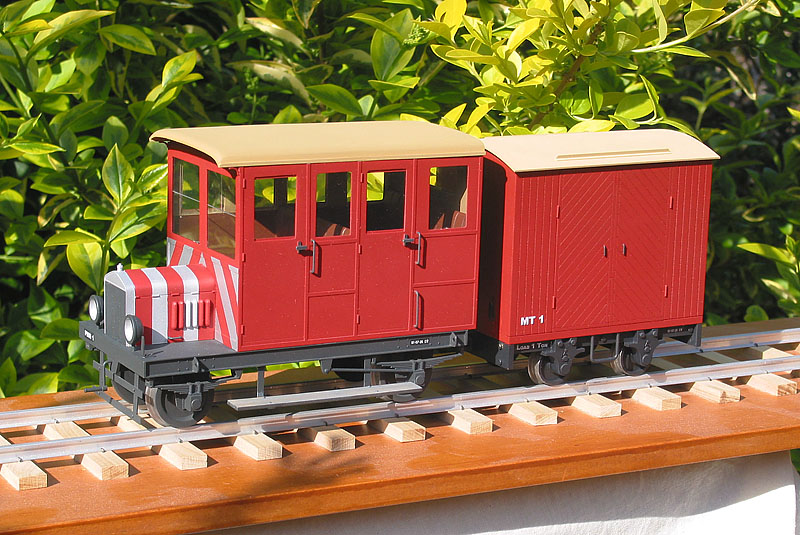 The last photo shows it with the trailer out on the track, standing in for Motor No.1 on the afternoon mail run. 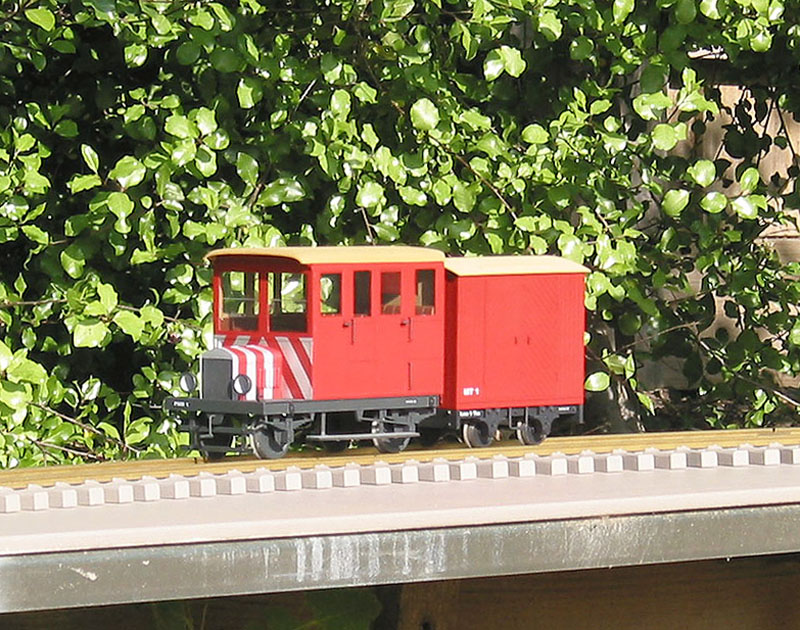 While the TVT engineer would have liked to have his own inspection car, it wasn't going to happen, so the management committee were spun a line that the passenger motors weren't that reliable and a spare was needed to protect the mail contract. The Mail Motor spends most of it's time sitting around in the workshop, so is usually available for inspection purposes.....

The local Ford dealer had a 1922 Ford TT truck chassis that was going cheap and the Engineer had seen a photo of the T&D inspection car. So work began on a 'spare' mail motor. The paint shop foreman wanted to paint it like the VR Dodge mail motors he'd seen on a holiday, but the engineer drew the line at being seen in an all over yellow and black striped 'tiger' rail motor.

Looks excellent, and to your usual high standard. You've also remembered to take photos during the build process, something that I still forget to do!
Phil

Here's a similar prototype from the Kent and East Sussex Railway. 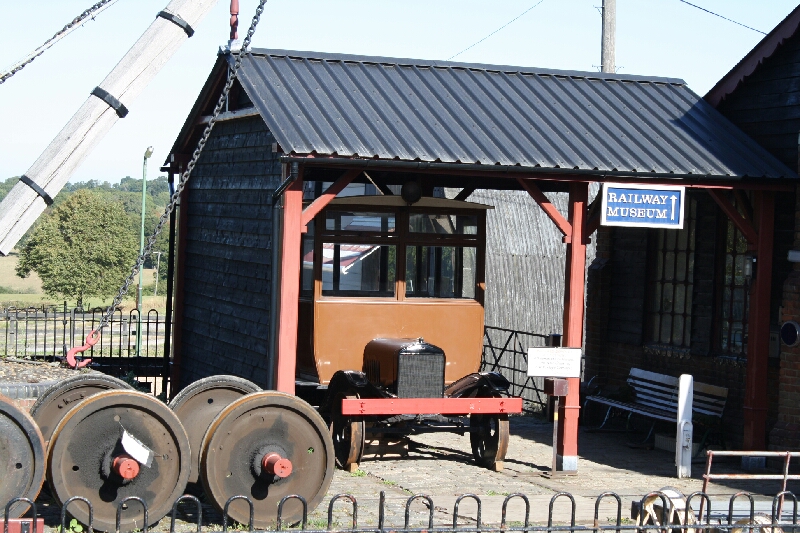 Lonsdaler wrote: ↑
Thu Oct 03, 2019 9:53 pm
You've also remembered to take photos during the build process, something that I still forget to do!

Which reminded me I forgot to take a photo of the interior as I was building it.

The Model T Ford has an idiosyncratic set of controls compared to modern cars, so I tried to simulate that. I didn't fit the three pedals though, as the false floor is too high. These pics show the interior now, after painting. 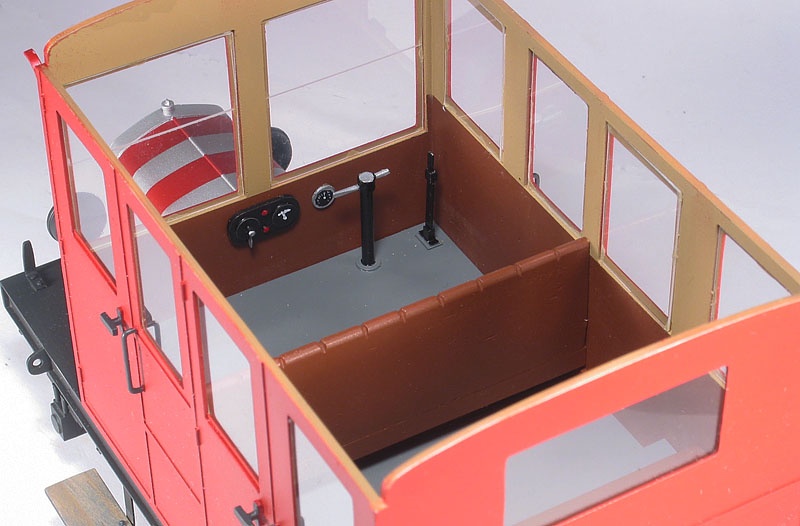 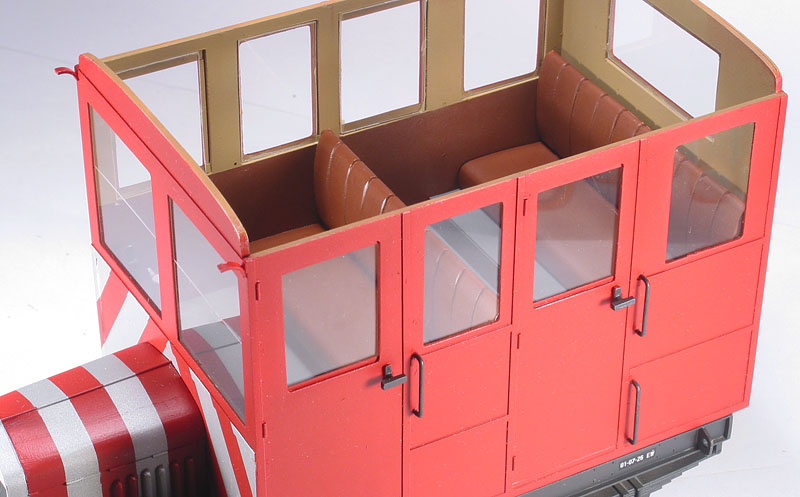 Manual control, just a simple on/off switch and a reversing switch. There's space for a Deltang Rx/ESC, but not worth the cost for something that will run very rarely.

It looks great - and so neat I thought I was looking at CAD sketches at first rather than an actual model!