Like your idea of the netting for getting ground covering established, Looking forward to seeing your railway develop. Lovely photos

The netting is a handy method I first encountered in the Manawatu gorge in New Zealand when I worked on the highways there, but have since seen in many places. I seem to remember seeing it in the Avon gorge at Bristol, It is meant to stop rocks falling onto roads and railways but can be useful for helping plants to establish themselves on vertical rockfaces.

This section has a very narrow path available so I will abandon the breeze block method for this section. I am going to try laying the next 8-10 ft (2.5-3 mtrs) on small paver bricks set in a shallow bed of pea gravel.
At the end of that section I will need to devise some kind of removable bridge to cross the path but I'll err... cross that bridge when we come to it

Looking at what's been done so far I can't help thinking that this line has been a bit overengineered, like putting in a cycle track to a spec which will accommodate 40 tonne trucks.
Top

Looking at what you've done so far I think it's looking great, and always over engineer rather that under engineer

We are all guilty of over-engineering at some point I am sure...
YouTube Channel
Top

I've got a friend who's a civil engineer, and I think I recall him telling me that a lot of Victorian civil engineering was built to last about 1,000 years when assessed by modern standards, wheras these days they reckon on 100... Anyway, better over than under...

The Cobtree line's looking great, looking forward to seeing more soon - intrigued to see what will grow up the netting too. The mind-you-own-business on my line has started colonising some vertical concrete blocks, but it's taken a while...

As previously alluded to, the next section of trackbed is being laid into a shallow bed of the familiar pea gravel; I think my local builder's merchants believe I'm constructing the base for a nuclear reactor, their stock reorder programme for 10mm pea beach has spiked.

This section of the line has to tiptoe between a narrow path needed for access and a row of plants bordering a trellis, so a deep base is out of the question. Hence the pavour bricks.

Looking back down the line.... I like the sound of this line having to negotiate around the garden. It should be very atmospheric when finished.
YouTube Channel
Top

Due to pressure of work and other aspects of life, the trackbed for my garden line has progressed no further than the last picture. Also I needed to figure out how the line would cross the footpath to the rhs of that picture as the line needs to swing to the right, crossing the path and curving around the pond to the reverse loop.
The path is more of a goat track through the back of the rockery and around the pond. Not intended for leisurely strolling it is more an accessway to tend the garden and of course maintain the railway (when it finally opens for business).
SWMBO has already taken a tumble into the pond once but fortunately the pond liner wasn't damaged

So a permanent bridge was asking for trouble. I need something removable but easily put in place for a running session. A timber trestle was too complex for me and not suited to constant movement. A lightweight stone lookalike viaduct made from expanded polystyrene? Not really.
The idea of Meccano popped up. I had no previous experience in this medium but the simple bolt together nature of it appealed and it is real metal !
The undeniable fact that anything made of Meccano looks like like it has been under sustained attack by a machine gun doesn't really bother me. Neither does its colourful appearance. Bridges are often brightly painted. The bits needed appear on ebay in random colours and tbh I like it that way. 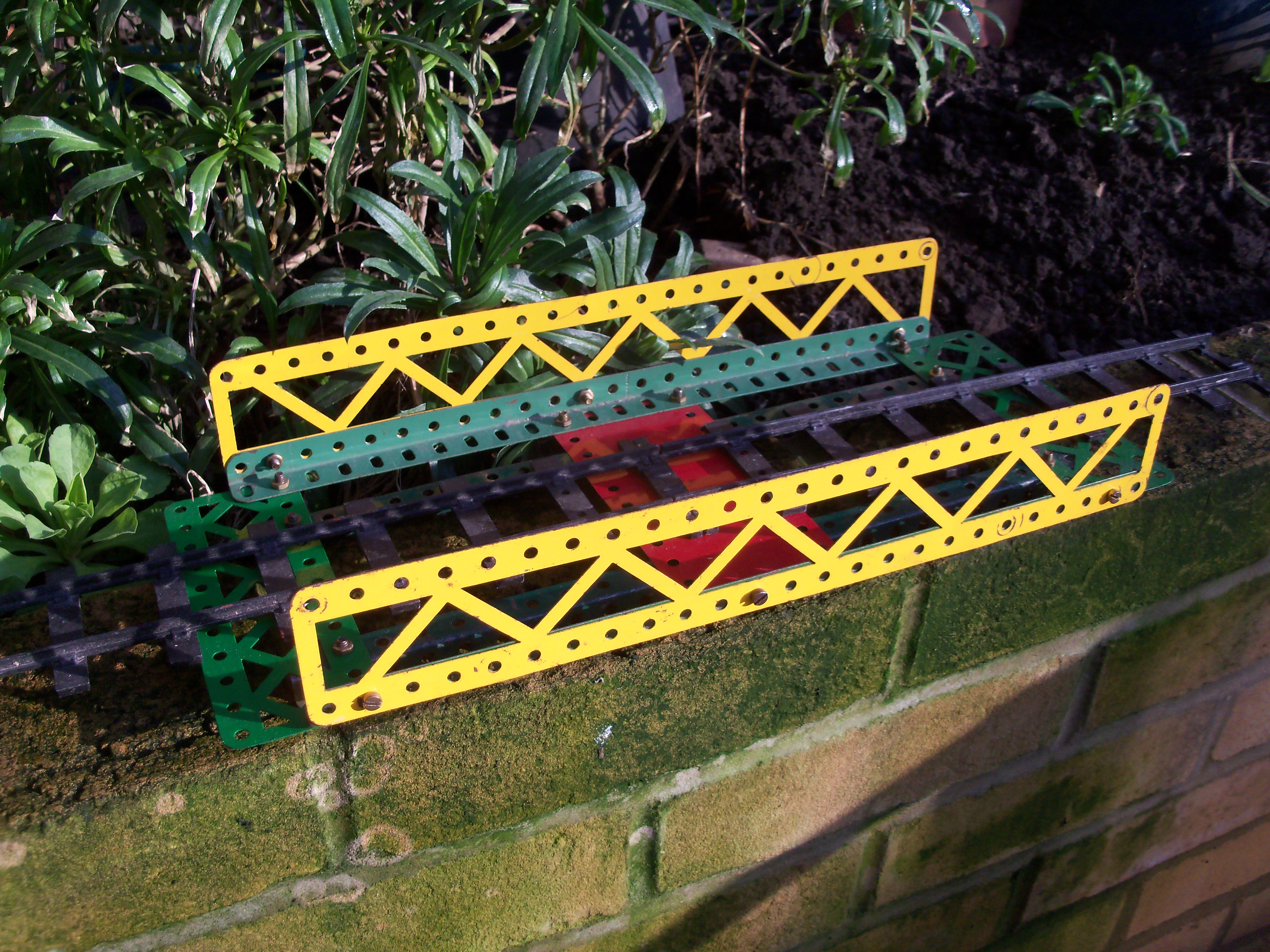 What you see here is one deck section. Two others will be required plus some extra L- girder pieces to provide additional strength underneath. A couple of large ice cream tubs full of concrete set in the ground with angle iron or steel pins sticking up should provide permanent anchorage for rough wooden abutments, maybe coated in grout scribed to look vaguely like stone.
It is only just wider than this loco and the approach to the bridge will be curved so clearance will be tight. 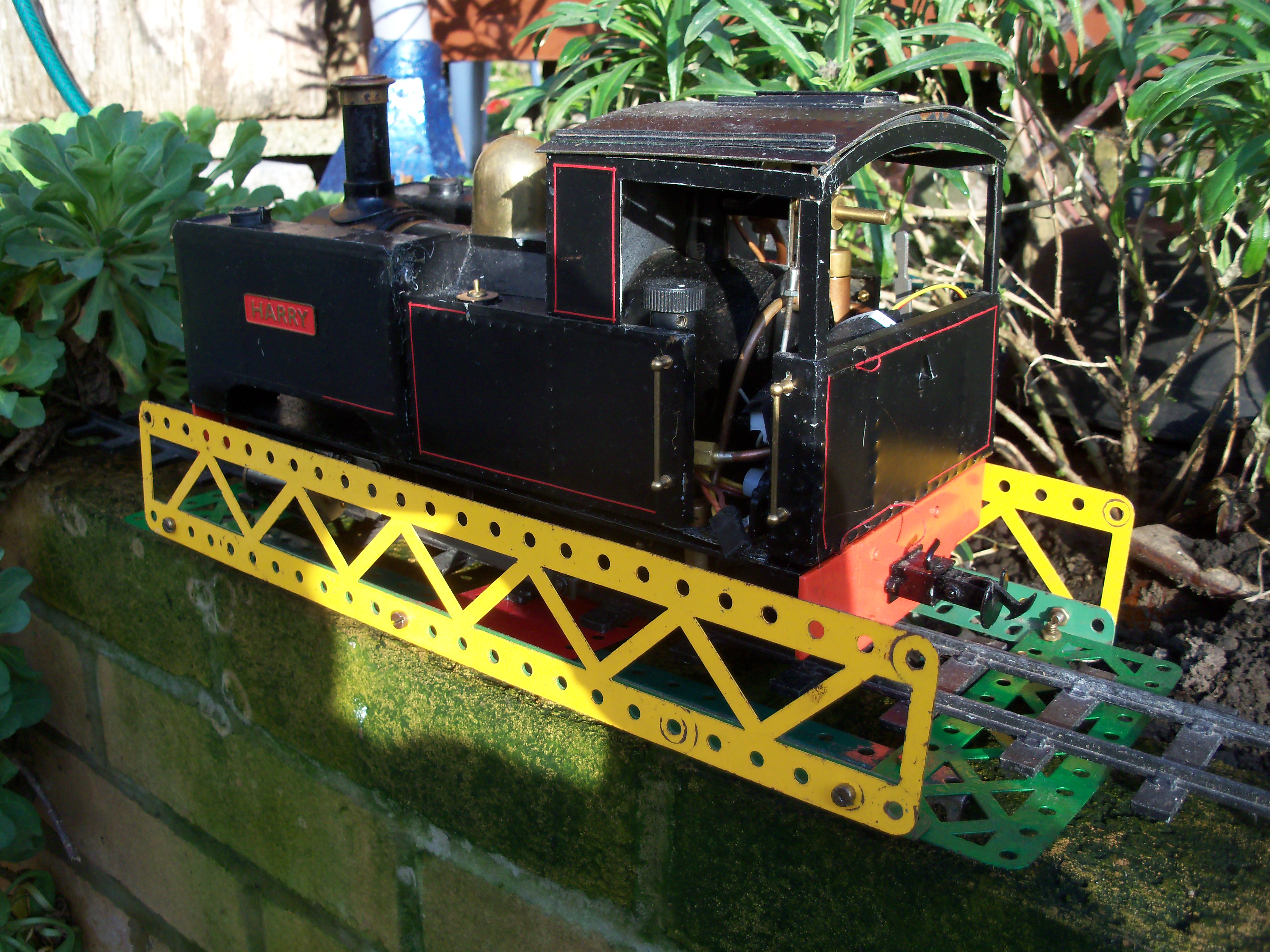 I like the bridge, a darn site easier than cutting bits of aluminium...I should know...

I think the colour scheme is cool too.
Top

I finally got chance to make a little more progress and the track is being laid around the south end of the pond.
The Chariot inspection trolley was sent out to test the newly laid track. I think it needs fitting with a snowplough to clear away all the hazelnut shells deposited on the line by squirrels.. 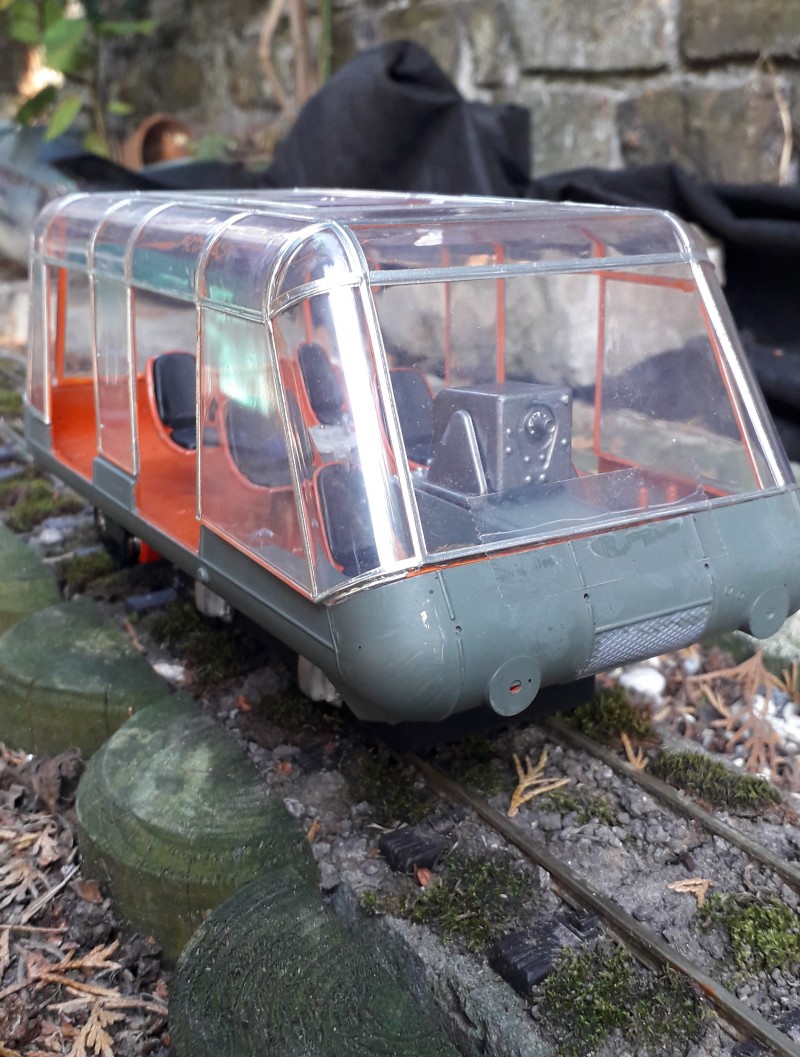 I made a video too but imgBB wasn't happy with that so I may have to start a youtube channel.
Top

That chariot inspection trolley looks familiar - Lost in Space, or something?

BTW, creeping thyme is doing a very good job of growing down a stone embankment on my line, maybe it's something you could consider for your cutting?
Phil

Yes, its the Lost in Space chariot, remounted on a 16mm powered chassis. It awaits a crew and some working lights fore and aft. Possibly a snow plough as well.

Creeping Thyme is great and yes, we have tried it here but without much success. Just shrivels up and dies. Wrong soil maybe,; I know it likes dry stoney conditions.
Top
Post Reply
41 posts