Very impressive Jack. You have learnt so much already with your printer.

Just wish I had the courage to invest in one

Very, impressive, maybe the printer is to be invested as part of my retirement.
http://www.tumble-down-falls.co.uk/

Thanks for the lovely comments, while the finished product looks good enough inevitably you dont see the 3 misprints, 15 hours of design and the weekly breakdowns that mean that even though i have 3 printers only one is ever going at any one point! Certainly handy when you're making multiples of certain objects but i do often wonder if i should have just bought some extra tools and just continued with building things out of styrene...

food for thought though I was just extremely lucky to be taught how to use CAD at school and to have quite a bit of experience with printing objects through engineering classes.
Jake

Tropic Blunder wrote: ↑
Thu Nov 28, 2019 1:21 am
I cant remember if i posted photos of the DH being transported to the railways workshops for assembly but it has finally happened!

Towing Melbournesparks's Sentinel steam railcar. this project was started not all that long ago and has come along in massive strides.

It certainly looks like a DH, it should be impressive when finished. Have you decided on a paint scheme yet?

I've been looking at building it's older relative, the EBR 10 class, but that will have to be built the old way, unlike you I can't get my head around CAD software......

Also interested to see the Sentinel railcar, as I've contemplated building one with a steam drive, possibly Leaping Lena from the NAR. Given the Tassie ancestry of the model is he going to be game enough to paint it in the original green flame livery?

Thanks Graeme this one will be the same as Walhallas DH, 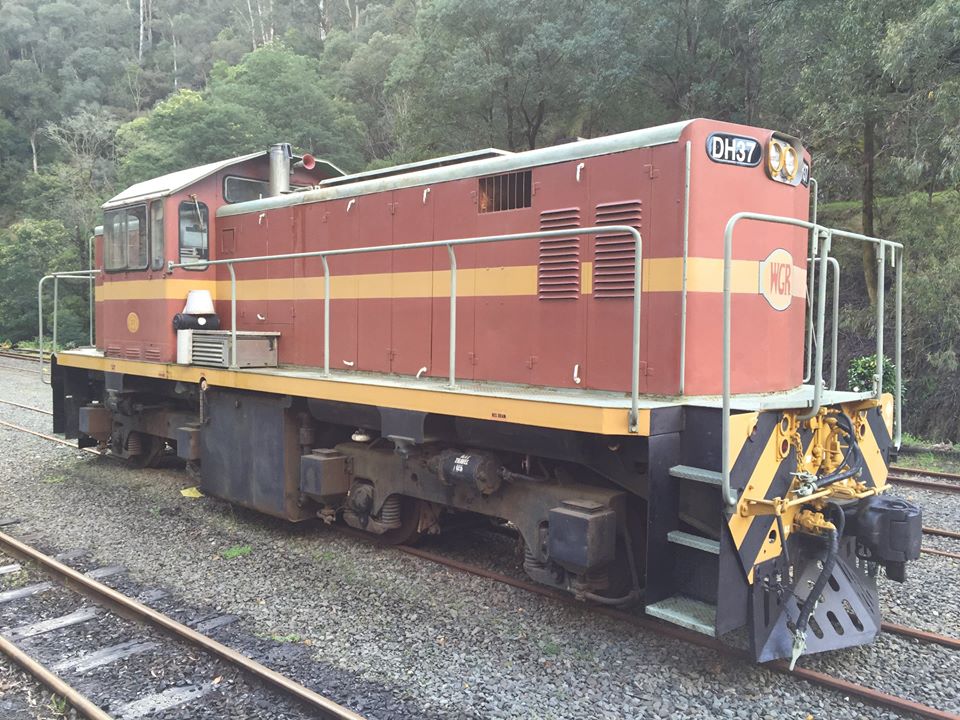 the second one will be painted in a variation of the cooks construction colours.I did briefly consider using the second motor block to build an 11 because i have access to 1107 but theres too much rearranging to make it worth the time and effort

It's steam powered using a proprietary boiler and engine unit i believe usually used in model boats then using brass gears and home made carden shafts off EBay. its got an automatic gas regulator and an electric water pump to maintain water level in the boiler. its capable of going around R1 curves even though its almost scale length (i believe its a window shorter then the real thing?) its going to be in a variation of the WAGR scheme as its actually a mix of both but dont quote me on that.
Jake

That's an attractive colour scheme which I haven't seen before. Has DH37 been gauge converted yet, or is it still sitting in the yard on it's display track. Hmmm. You won't lose sight of a Cooks DH when it's running, it's a hi-viz scheme on a garden railway.

Walkers had some sort of technology agreement with North British and the 10 class seems to be based on the Indian YDM-1 class built by NBL in the mid '50s. So the 10 class is an old enough design to have replaced the VR G class in an alternative universe. One where the state govt. had an average IQ over 40........

My Accucraft Walker railmotor is all metal and weighs in at 5kg, so the single motor is working fairly hard to just lug itself around. I'd want to keep the weight of a large diesel model under 4kg, so the bodywork would be polystyrene sheet above the footplate with a steel underframe for strength. Drive would be a Como geared motor in each bogie with bevel final drives to the axles and the batteries and electronics would be up in the plastic body.

A metal body would also be a lot more work with all those louvres and getting rc to work reliably over reasonable distances in a metal body isn't easy. Just been through all that with the Walker railcar.

The DH looks great. It must be a heavy beast. I like the green coach in the background of the workshop photo. Is that a freelance model or something specific? Your mate's Sentinel railcar is a beauty too.
Top

Thanks I'm certainly a lot more fond of it then having blue and gold stickered over it. Eventually ill get around to finishing the CAD drawings for the lines Clyde G8B's which will be delivered in BHP's red and silver scheme which is quite similar.

I am also planning on doing an oddball in the later BHP yellow/APM paper mill colours which will be close enough to the cooks colours to keep corporate happy about maintaining "fleet" liveries... 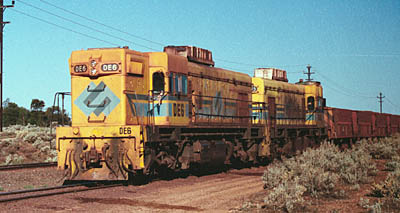 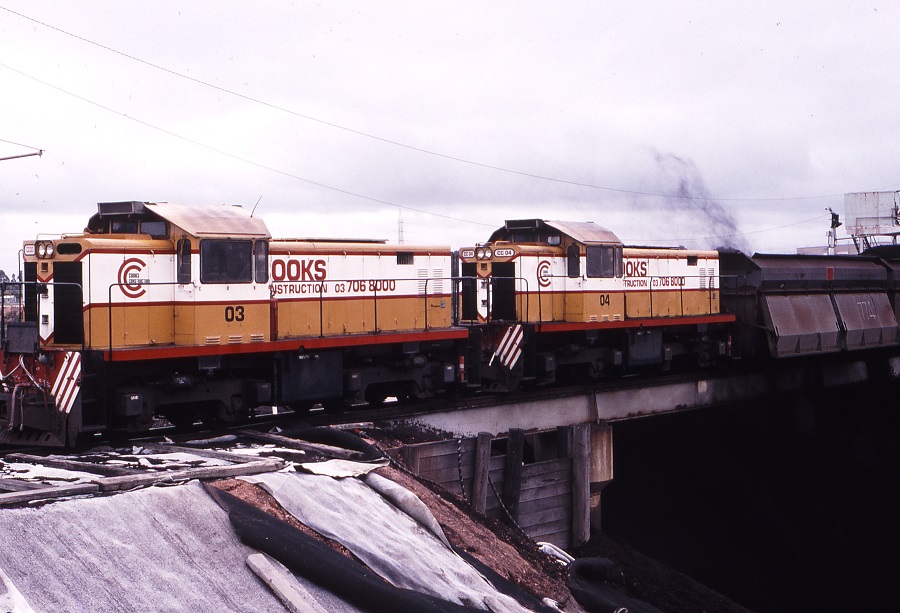 Neither DH has been gauge converted as far as I know. DH37 was as pictured about 3 weeks ago although I'm not sure about DH72 there hasnt been much news lately other then they're looking for donations.

The YDM-1s are quite a pretty engine actually I didnt realise the 10 class lineage went that far back. I assume that the 10 classes had the same motor and transmission as PVH 21? and EBR just ordered the same thing but as a locally made bogie job?

Sounds like a recipe for success at least most panels are fairly flat although as you said the louvres can be a pain. Will be plenty of time arranging lines of styrene unless you can make a punch and die to make them out of steel?

Thanks Invicta, loco weighs 1.5 KG so not heavy at all just the weight of the 10 AA batteries really. When i build the second one and steal a motor block out of it ill put a Kilo or two of lead in it to help it a long a bit but at the moment it has no problems hauling 7 wagons around a moderately graded track.
The green coach is a Bachmann Emily coach although its 1:22nd scale it fits in with my Australian 1:24th scale stuff and passes for some of the early TGR stock well enough although it needs a hit with some Dullcote and the whitewalls removed, if i ever find a second one ill be grabbing it for sure.

Tropic Blunder wrote: ↑
Mon Dec 02, 2019 5:01 am
Eventually ill get around to finishing the CAD drawings for the lines Clyde G8B's which will be delivered in BHP's red and silver scheme which is quite similar.

By the time I got to visit the Whyalla plant (I worked for BHP Steel before retirement), the G8s were being vandalised by Morrison-Knudsen into some of ugliest objects I've ever seen at the front of a train.


Tropic Blunder wrote: ↑
Mon Dec 02, 2019 5:01 am
The YDM-1s are quite a pretty engine actually I didnt realise the 10 class lineage went that far back. I assume that the 10 classes had the same motor and transmission as PVH 21? and EBR just ordered the same thing but as a locally made bogie job?

The PVH-1, the YDM-1 and the 10 class all have Paxman V12 prime movers and Voith transmissions, but each has a different version as far as I know.

What possessed anyone to think a rigid frame diesel with side rods and an NBL designed cooling system like PVH-1 could be considered suitable as a main line loco escapes me. NBL went under a year or so before the 10 class were delivered and the EBR had enough experience to know what they needed by then, so I guess Walkers had someone that understood cooling systems and just got on with it. I've read that the EBR approached Tullochs first, so perhaps the VR, or the TGR, warned them off.

Presumably EBR specified a Paxman for standardisation reasons, but Walkers never used Paxmans again and the 10 class were eventually fitted with Caterpillar prime movers. The DH prototype and it's very successful descendents were all built with Caterpillar, or Cummins prime movers.


Tropic Blunder wrote: ↑
Mon Dec 02, 2019 5:01 am
Sounds like a recipe for success at least most panels are fairly flat although as you said the louvres can be a pain. Will be plenty of time arranging lines of styrene unless you can make a punch and die to make them out of steel?

Not sure my toolmaking skills are up to making a press tool for pressing out louvres in metal. The easy way to make them with polystyrene sheet is to use sections of Evergreen 'clapboard' sheet (weatherboards in Oz), inset into the body work.

Bugger! I'm with you theyre an abomination of a loco still better then some of the more modern locos that are emerging. I was pretty sad to see DE05 (1251) shipped over to South Africa (where is it now??) there was vague motions about buying it for preservation but the asking price was too much. A shame to see the last of the original locos gone.

I guess steam locos with similar or longer wheelbases were doing it successfully previously so why not have the same in a diesel. Tullochs never seemed to really have a lot of success with their designs which is why i cant figure out how they survived in the marketplace for so long! I will admit I am quite partial to the VR and TGR W's though and the DRC's even if Mechanically they were atrocious!
Jake

Happy new year all, Had a pretty busy Christmas as there was no point taking time off because everything was on fire. No recent photos as the smoke has made that pretty pointless too but heres a video from just before christmas of some running at Alexanders. there'll be a vid of the NEVR in the next week sometime.
Jake

Nice video, thank you! Coincidentally, I've watched a few videos of that line in the last few days - it seems to have tons of character and atmosphere...

Looking forward to footage of your line in due course - the fires and smoke sound terrible, I hope they're not affecting you too badly.

Just been catching up with this thread. It makes interesting reading.

Just wondered if you'd got the Deltang range problems sorted out with your DH loco?

Thanks Andrew, its amazing what hes achieved with an extremely limited outlay. All the handbuilt/kitbashed models use recycled materials as does the tramway construction. The proofs in the pudding, you can create an exceptional quality line if you're willing to scrounge for materials a bit!

The smoke drift has pretty much stopped now luckily which makes breathing a bit nicer. Even though i live a few hundred kilometers from the fires Melbourne still had this amazing thick haze through it. at one point visibility was so bad at work you couldnt see the sand plant from the workshop which is less then a kilometer away...

I ended up installing another reciever into the loco which has cured the problem for now. I'll have to send an email to micron and see what they want to do with it.


Thanks all
Jake
Jake