Many thanks to Jack (90733 of this parish), the management of the W&L can now realise their vision of a railbus replacement for the revenue losing services.
All previously inspected vehicles had driving cabs at one end only and the required turning deemed them unsuitable.

The vehicle was then totally stripped to its component parts; All there excluding the glazing (which needs no work so has been "stored" safely ready for re-assembly) and the wheelsets which are being replaced.
There is only one screw (which holds the cover on the power bogie) - the rest simply un-clips!

A little care has to be taken and I used an engineers 6" metal ruler which was nice and thin enough to gently separate joints and ease them away from the locating lugs.
The end glazing (screen and quarter lights in one piece) took the longest to remove to avoid any damage, but even they were a simple "push in and down" technique in the end!

So, the body parts are ready for paint and the interior awaits seating etc. Meanwhile attention turns to the motion; The trailing bogie is at the top with the parts of the power bogie below it.
The plan is to try and keep the railbus as original as possible (hence the "restoration" title) so I plan on attempting to re-use these as far as possible.

here's a close-up of the motor block, along with The Screw; The observant will have already noticed that this unit is actually a universal bit of kit - there are fittings for three wheelsets.
The horizontal motor mount makes this a definite "keeper"

As for the trailing bogie; no, I'm not going for wooden axles 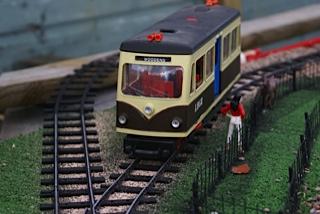 An interesting project Greg, I'm intrigued to see just how you go about regauging this
"What the hell is that?"
"It's a model icebreaker sir."
"It's a bit big isn't it?"
"It's a full scale model sir....."
Top

Are you going to make use of the track side operated reversing switch?

An interesting project Greg, I'm intrigued to see just how you go about regauging this

Now that's a shame, I think they look nice in chocolate and cream: As well as being the livery of my old West Kent Light Railway and reminding me of watching the KESR's old AC Cars railbus from the battlements of Bodiam Castle in the early 80s (their house colours were C&C too back then), it kind of fits with the dubious blurb I wrote for mine on my website:

"When I'm feeling in need of a vaguely plausible "history" for my stock it becomes a 1950s attempt to provide economical winter services on the Vale of Rheidol line, later sold on to the WKLR's preservationists. Like some of BR's other railbuses of the era we can suppose that it was constructed by Germany's Waggon und Maschinenbau company - and perhaps that a mix up between metric and imperal measurements accounts for its rather small size..."

Told you it was dubious...

If you do go for a two-tone colour scheme I found it surprisingly easy to paint those moulded stripes on the side to represent gold/black/gold lining. Where the mouldings stop across the doors I bridged the gap with microstrip to maintain the look.

I've got another one somewhere which I'm tempted to paint in a version of BR green after travelling on the GlosWarks' "bubblecar" - either with "speed whiskers" or with small yellow warning panels and a white bit above the cab roof.

I still use the switch on the side to control mine manually, but have retained the underfloor switch too, which I activate with little loops of coathanger wire to run a basic automated shuttle.

I'll be interested to see how you deal with the red plastic wheels. The black I added paint has rubbed off mine, so it looks a bit garish down below...

Good luck with the project - I'm a big fan of these little railcars. Forget my Roundhouse and Accucraft products - my railcar's my wife's favourite!

Serious head back on now

The body is currently in the paintshop (hurray for dry weather!) and to answer your questions Chris, I'm planning on replacing the wheelsets with metal ones during the re-gauging and yes - I'll be keeping the standard controls. (If you could embellish your "coat hanger auto reverser" I'd be most grateful

Narrow Minded:83907 wrote:(If you could embellish your "coat hanger auto reverser" I'd be most grateful

I'd like to pretend that the Cox's Railcar Reversal Ramp is a wildly complex invention, but in fact it's a very simple device inspired by an incident on a friend's line when another Faller loco changed direction on encountering a particularly bushy clump of "Mind Your Own Business" growing in the "two foot". After that I examined the original Faller control mechanisms (great big lumps of unattractive plastic) and realised I could do the same thing with a simple loop of wire: And that's all there is to it. As the railcar approaches the little lever on the bottom of the powered bogie engages with the loop and is pushed across, putting the railcar into reverse. The only vaguely tricky bit is getting the loop at the right height (too low and it sails on past, too high and it stops the train) and the right way round. I think you'd want yours slanting in the opposite direction to mine because at some point or other my railcar had its wires crossed, quite literally, and goes backwards when the lever on the side indicates it's going forwards...

Perfect, thanks Chris - I'll certainly be copying that so I can set up a "Shuttle Service" when the mood takes me

Been busy with other stuff recently but here's some more progress;

Panels etc painted - just need to sort out the seating arrangements for the passengers now! Body out of the paintshop too ready for lettering, roof still in primer awaiting a colour decision Narrow Minded:83979 wrote:Perfect, thanks Chris - I'll certainly be copying that so I can set up a "Shuttle Service" when the mood takes me

Happy to oblige, it does work pretty well - but I'm Andrew, not Chris!

The steel wheels look good. Wonder whether they'd fit the original axles? I could be tempted, partly to lose my red wheels problem but also to get a bit of "clickety-clack" going on...

Re. Busted Bricks wheels. I have a mains version of the chassis E-Train. I intend to convert to battery power and fit steel wheels, which are on order. If the axles are 3 mm, the wheels will go straight on,if smaller it's no problem fitting a larger axle. The fun bit I'll have is fitting rods to the chassis. Years ago I had a Graham Lamb loco named Peregrine based on this chassis and she had rods. I lost the loco in a house fire and am going to build a replica, with modern bits.

Lead me not into temptation,for I can find my own way.
Top

Sorry Andrew, I'm making a habit of mixing-up names at the moment - hope it's not becoming a trademark!

Only the driving axle is 3mm, the other three are closer to 2mm. It looks like an easy job to open out the bogies to accept the replacement 3mm axles though.
(BTW just in case they're needed, the traction tyres fit the steel wheels!)

Seeing the Intercity sticker on that has given me an idea...it's probably a very good idea I don't do anything battery wise in 16mm!

Are the dials on the cab desk painted on or a print out and stick on?
Top
Post Reply
50 posts