Thanks for the kind words re the building folks, much appreciated...

At the same time as I finished that one off I was giving the old platform shelter at Clarach a bit of a refresh. It's a Pendle Valley Workshop resin kit, always intended as a stopgap and so not built with quite the care it should have been - it started its life wonky, and exposure to the sun and a couple of tumbles from the platform to the patio have made it wonkier still. The recent work hasn't corrected that, but has smartened it up a bit - and it's usually only viewed from the back anyway! 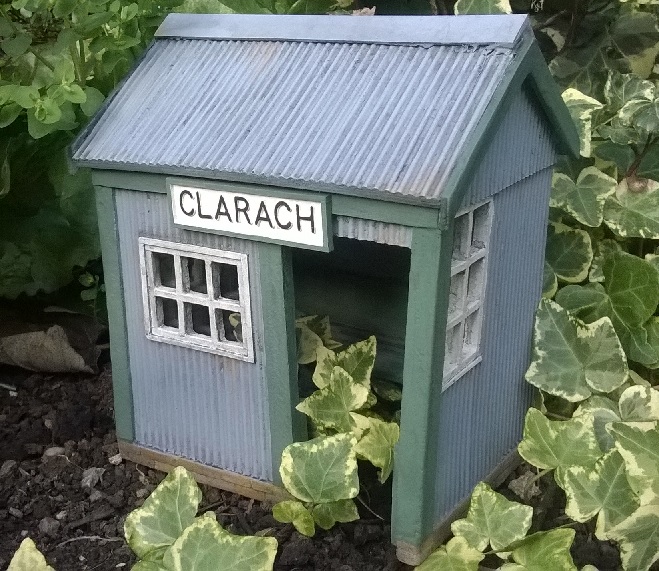 It's posing in the front garden here (the line's not quite that overgrown!) and will now join Penlan's building in store until spring. Both stations need their platforms repairing/replacing, but I'll leave that until after winter now. I reckon Clarach's hut will do for another season or two, and by then I should have come up with a replacement - I'm thinking of a model based on Beddgelert's lamp hut, but with an open front where the double doors are.

In the meantime I think I've decided to go for making a signal box next -Trefechan's old toy station building is respectable enough for now, and the signal box will be an interesting challenge. I think I'll start wit the windows to get one of the more difficult bits out of the way first...

With Tom's station building and the rusty tippers finished at the weekend, my thoughts have naturally turned to what I might do next. The priority has to be tidying up the railway, and that will include a new tunnel mouth to replace the one that fell apart after the wood holding it all together rotted away. I'll probably have a go at a model of Tryfan Junction signal box at the same time, because that will stand next to the tunnel and I'd like the colour of the stonework to match.

This lunchtime however, a trip to Wilko resulted in the first step being taken towards a future project, some sort of lineside hut or shed: 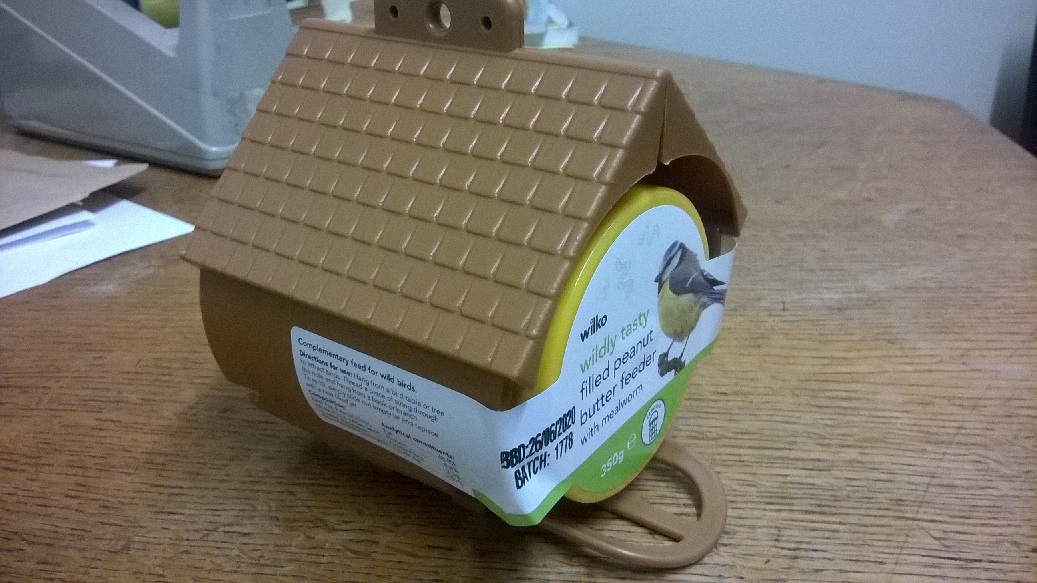 It's hardly the most efficient way of modelling a small slate roof, and I doubt it's the most efficient way to feed peanut butter to birds either, but I thought it would be fun to play with when my feathered friends have finished with it. I shall hang it in the tree when I get home - I'm hoping to lure back the little gang of cheeky sparrows who were regular visitors to the garden last year...

Love the platform hut Andrew, it looks just right to me...

I bought some of those bird feeders of a well known shopping channel in January....All we got were those bulling gang of flipping starlings........

There was a couple of Blue Tits, but they didn't come back after the starlings visited....
Rod

Great use of the bridfeeder
Top

Another foamboard build for you - this forum seems to be quite a foamboard fan club!

This one's a new tunnel mouth for Trefechan.

Readers of my Railway thread may recall that Trefechan tunnel (on which Clarach station sits) is largely made from decking board, clad with slate to look something like a Welsh hillside. The original tunnel mouth was made from pieces of slate and was intended to look something like the Welsh Highland tunnels in the Aberglaslyn Pass. Unfortunately the glue failed and bits of the wood rotted, so that fell to bits, forcing me to rig up this temporary solution to keep that corner of the garden looking even vaguely presentable: 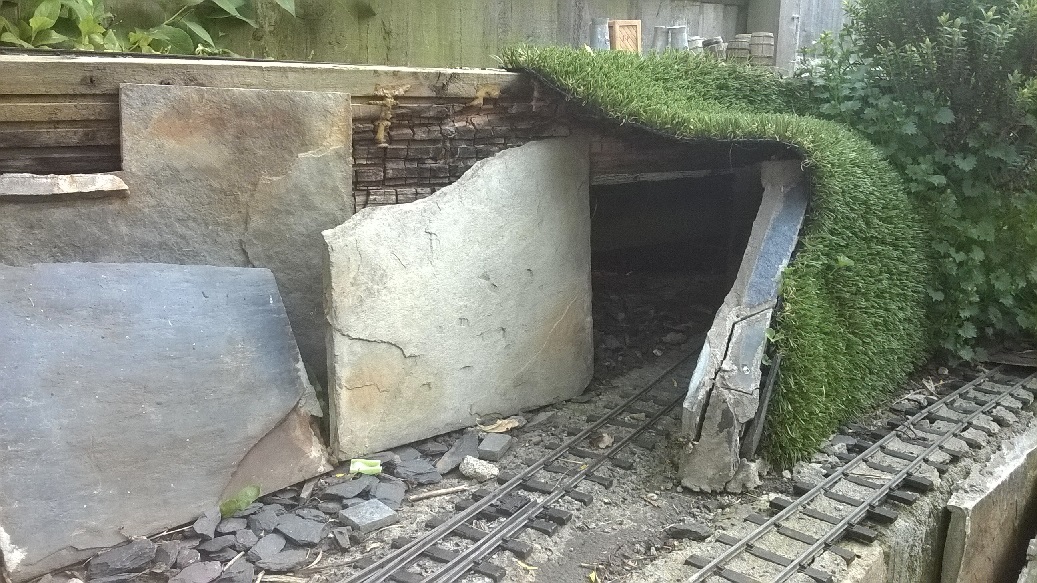 That clearly wasn't going to do for long... Yesterday I had an extra day of holiday so, with the rest of the family doing other things, I stationed myself at the patio table and began work, starting with clearing the site: 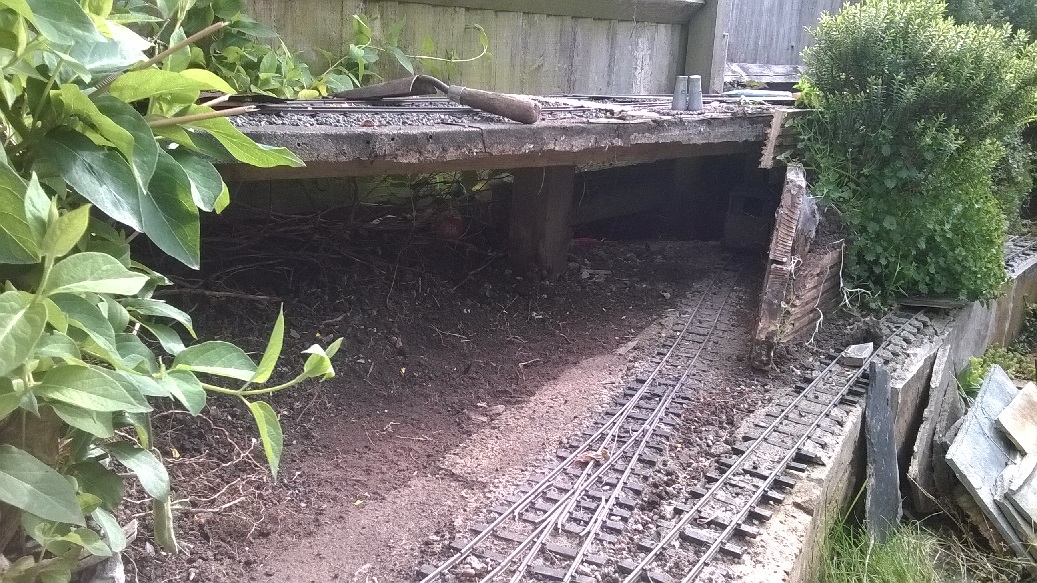 The whole area will be tidied up as part of this project, with the space on the left designated for Trefechan Signal Box, which will follow at some point...

Whilst clearing I came across this little chap, who I was careful to find a new home for: 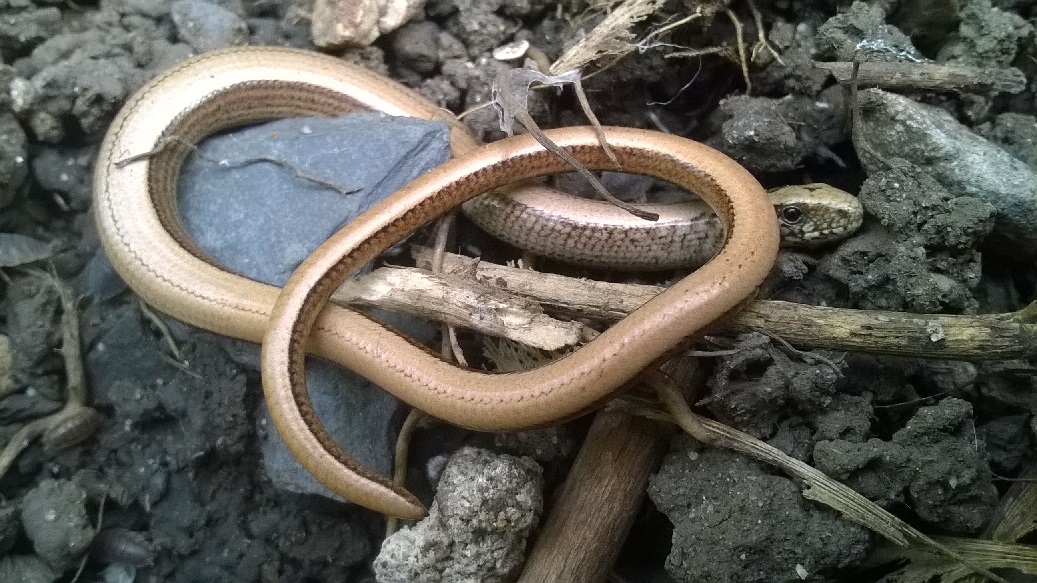 I do think that Slow Worms are rather lovely - understated, but handsome and beautifully proportioned. Rather like a Great Western Manor class...

Anyway, I got to work with the foamboard... It's quite a restricted site, which meant that the wing walls are parallel to the track and become the walls of the tunnel, directly supporting the arch. It's hardly classic tunnel mouth design, and I'm not entirely happy with it, but I've adapted NWNGR bridge features, particularly the shallow (yellow brick) arch to try to make it look vaguely plausible.

Here it is under construction: 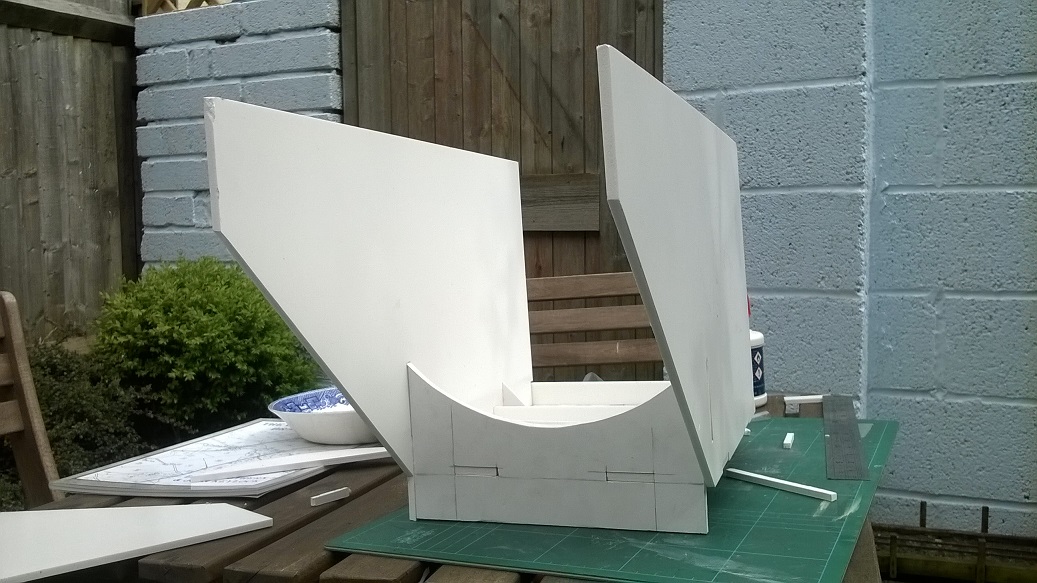 And in situ, being tested for clearances with thaid of my tallest, widest loco - it's tight, but it'll do! 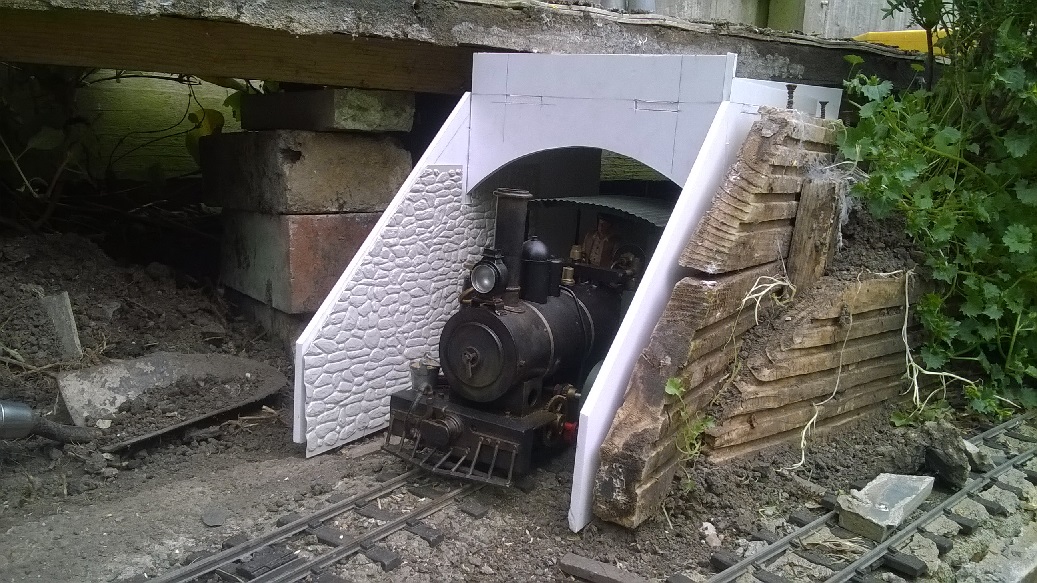 I'll be using plastic cladding for speed and convenience, even if the stone pattern's not quite right for the NWNGR... I reckon it'll all look OK once it's painted and the planting's grown up around it...

Nicely worked out Andrew...Who cares if it's not quite right on the brickwork, so long as your happy with it...It's your line after all..

I've managed a little more work on the tunnel mouth, completing the cladding on one wall, plus the bit above the arch. That's now scribed to represent bricks, end-on as seen on NWNGR bridges - don't look too closely, it's a bit wonky! 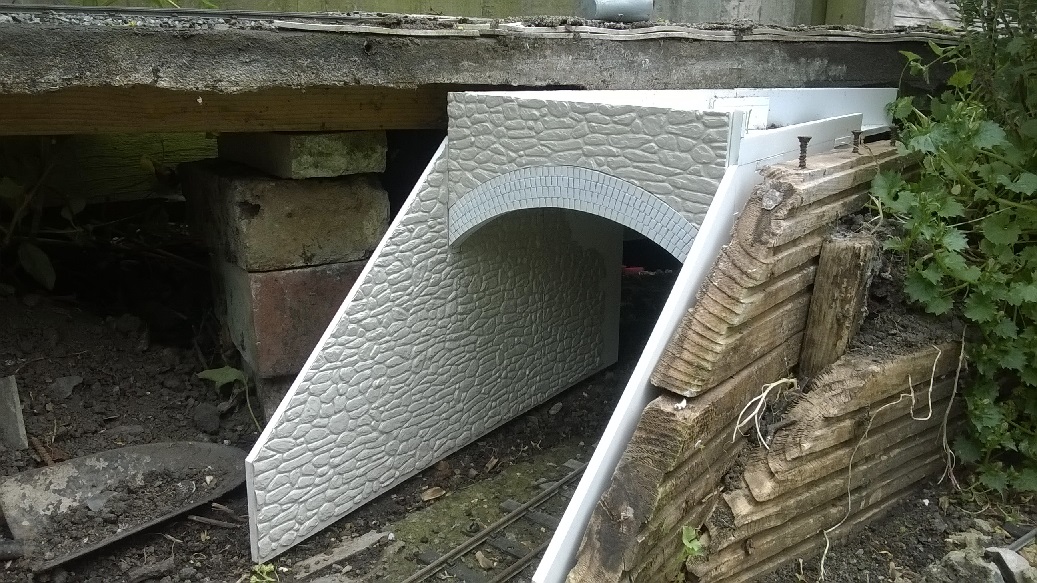 I need to order some more cladding now, then there'll be a bit of filling to do before I can paint it...

That stonework looks superb, Andrew. A cracking good job. It's years since I've seen a slow worm. Glad you found him a new home.

It's been a while, but I'm back in building construction mode... The current project is a model of Tryfan Junction Signal Box, constructed for the NWNGR but made redundant when fixed signalling was dispensed with in the WHR years.

As is becoming my usual practice, the model features a foamboard shell, with tabs and slots to enable me to trial fit all the parts and modify as necessary before finally gluing everything in place. The window frames are from plastic strip but remain unfinished for now because the model shop have run out of the right size... 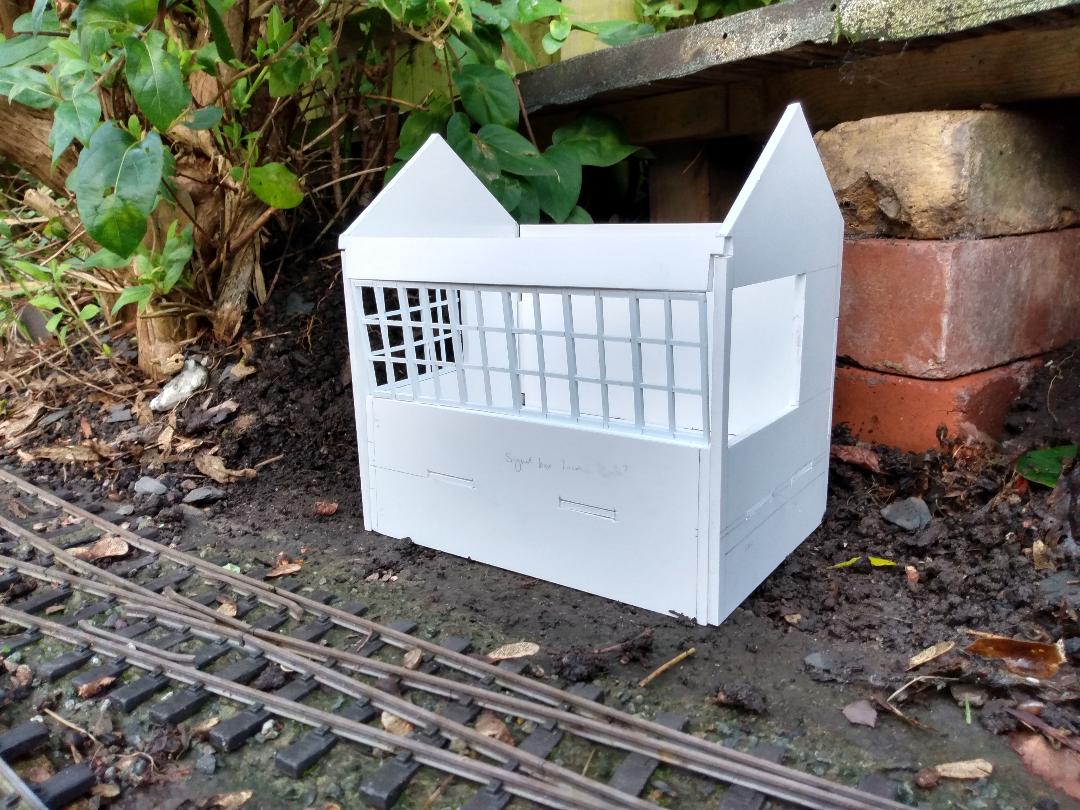 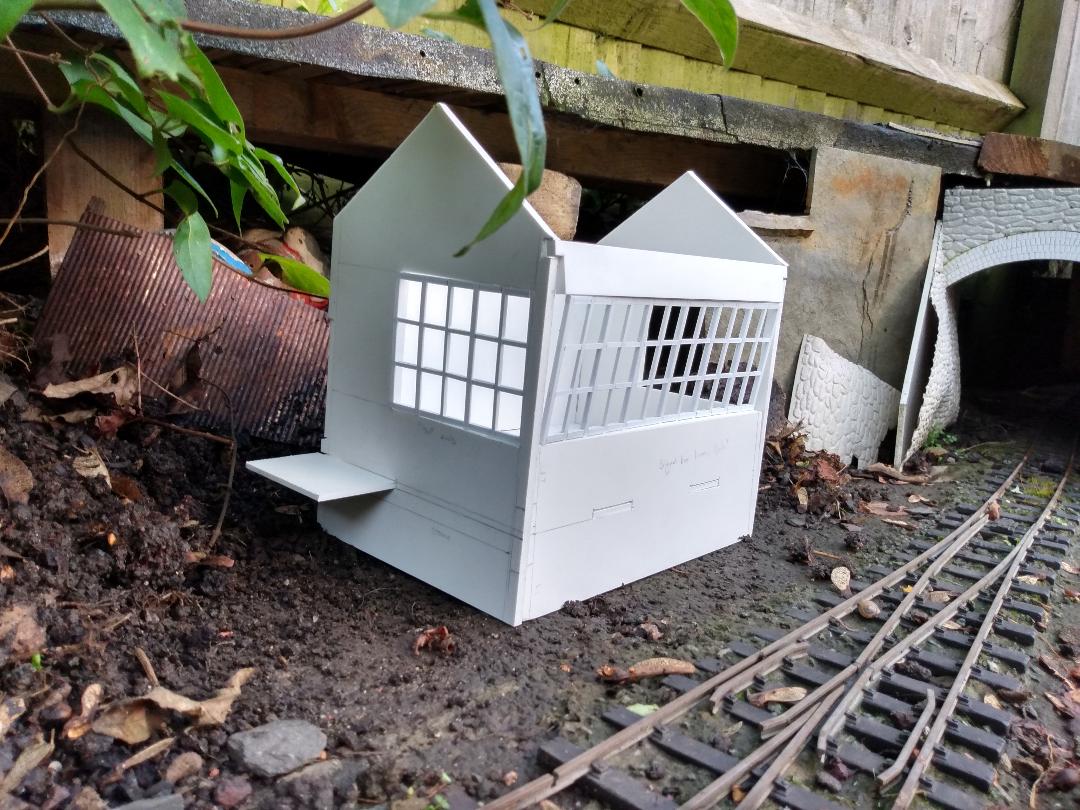 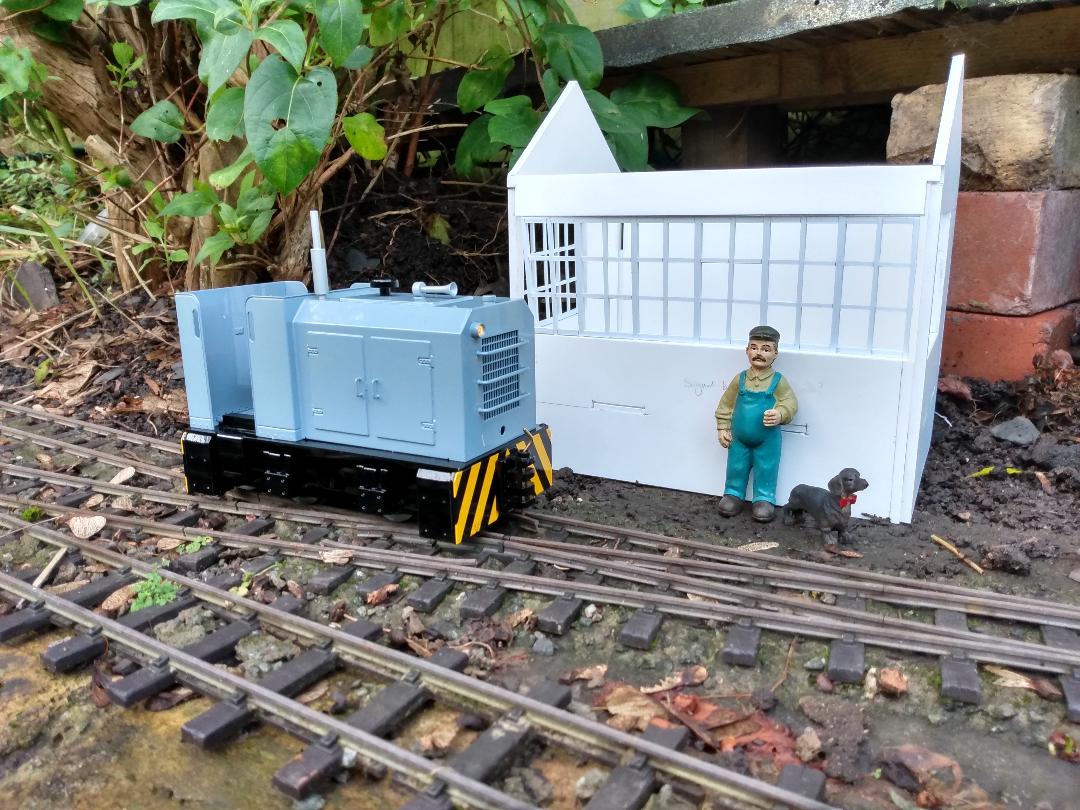 Since these were taken I've added a base, which will make constructing the steps easier. That's the next job, then finishing the windows, I think. The interior walls and floor need a little detailing, then I can glue it together and start on the exterior cladding.

Interesting build Andrew.Like the way you have a slight slant for the window.