Thanks for the encouragement guys but I have to confess something- the reason I have all these little activities piled up, and the reason these figures and detail parts are from Peterborough 2017 is that for a whole year, my workbench was so disastrously messy that I avoided even showing my face in the room, unless it was to dart quickly in and out to grab a tool or something. I am terrible at picking up after myself. One day I decided I'd had enough- I could feel the waves of untidiness emanating from the basement- so I went down there, tidied it all up, and discovered all these little bags of details and small kits and figures buried under all the mess. That's why my bench looks nice in the pictures. I'm trying really hard to keep it that way for a while.
Top

Here is the latest in my "project" to improve my rolling stock- my Gladstone car, which I built several years ago. At the time, I didn't want my rolling-stock to be particularly fancy-looking and I painted it in a dark varnished-wood look. Now, however, I feel like the coaching stock on my railway should look nicer, and also the real Gladstone car, while it was an unexciting brown colour during its restoration, looks much nicer in its "blood and custard" paint scheme. So, I've bee working on the model.

I noticed on the real coach there is some nice quarter-round beading on the sides where the roof attaches. I have recreated this on my model with some 1/16" square balsa left over from a model aeroplane kit ( I keep everything) Also as I mentioned before, the "anti-hogging" bracing (this is what it's called on a ship, I don't know what it's called on a railway carriage) wanted re-doing. After priming the whole thing, I masked the roof and the bottom of the sides and ends, and did the "cream" colour. It turned out nicely enough, but the masking tape was so well-stuck to the windows that I had a very hard time getting it off. Also, it didn't do a very nice job of masking the bottoms, so I've had to scrape some paint off. The result of all this is that now the windows are a bit mucky-looking, as even the soft wood I was using to try and lift the paint has left some scratches. The plastic used by IP, while very transparent and easy to cut, is also very easy to scratch.

Oh well. I've decided that I 'm fed up with masking, so I'm doing the bottom half with a brush, and actually thanks to the laser-etched panel lines, I'm pleased with how that is going. I'm using the boat-building practice of using many very thinned coats, hopefully to achieve a nice gloss.The paint looks a bit washed-out in this picture, because it's only the first coat. Also I have to use what I can get paint-wise, they no longer make the "wild raspberry" enamel that I used on the locomotive and Brandbright coach, and the "field berry" colour that's replaced it has less brown than the former. Oh well again- it's narrow-gauge. I guess my rolling stock will always be a bit mismatched.

To finish it off, I've ordered some Brandbright brass door-handles as they're nicer than the white-metal IP ones, not to mention the real ones are brass. I've also ordered some Brandbright brake hoses (not totally as-per-prototype but hey ho it's got to match the locomotive) AND some scale transfers, as I think the real one looks very nice indeed with its lettering, AND it occurs to me that since I live in the North West territories, I can always say that the letters stand for "North West Narrow Gauge Railway. Ah-ha.

P.S., yes I do intend to someday paint the roof on the Brandbright coach! I just haven't decided on a colour or covering material. It occurs to me that doped tissue- per model aeroplane practice- might look OK once painted. 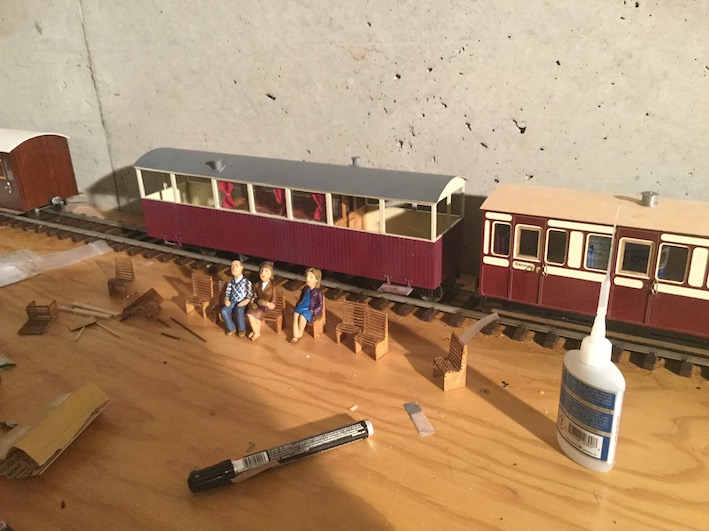 I have used toilet paper soaked in pva glue to get the look your after, in either black or grey.
Rod

How do you apply it? Lay the paper on the roof first and brush on the PVA?
Top

As an alternative I use fine weave curtain lining material, which gives a fine canvas like texture when painted. If applying to plasticard I lay it on the roof then soak with solvent. If used on a plywood roof I paste the roof with PVA then smooth it on by hand. Either way, leave to dry thoroughly then finish the edges by rubbing fine sandpaper in a downward stroking motion.
Works for me!
The best things in life are free.... so why am I doing this?
Top

Peter Butler wrote: ↑
Sun Jan 13, 2019 3:05 pm
As an alternative I use fine weave curtain lining material, which gives a fine canvas like texture when painted.

Any fairly fine weave fabric works. I've used an old polycotton shirt and old handkerchiefs as well as lining material. Don't use printed fabrics though because that will affect the glue take-up and subsequent surface finish.
Philip
www.tinyurl.com/philip-trains
Top

I have used a stretchy fabric from one of the girls' old discarded dresses. I stretched it over the roof and sprayed it with aerosol glue if I recall correctly, before trimming with a craft knife.
Top

These are all great ideas guys. Thanks! I imagine the bog-roll gives a more "roofing felt" type of appearance, while the cloth liner material gives more of a "canvas" look.

Maybe I'll try both. I have loads of unfinished roofs. (rooves?)
Top

Keith S wrote: ↑
Mon Jan 14, 2019 6:30 am
These are all great ideas guys. Thanks! I imagine the bog-roll gives a more "roofing felt" type of appearance, while the cloth liner material gives more of a "canvas" look.

Maybe I'll try both. I have loads of unfinished roofs. (rooves?)

Either. Oddly whereas we're more likely to see or hear hooves than hoofs, we're less likely to see/hear rooves than roofs
Interesting thread. Picking up all sorts of useful ideas here, thanks.

Exactly that way Keith. Real easy to do and once dried it goes hard enough not to chip if knocked, I then paint it, which also hardens it.
Rod

Here is the progress on the "Gladstone" coach. I managed to clean up the worst of the smudges and scratches on the windows. A bit of guitar-polish made most of the scratches disappear and a scrub with a cotton swap soaked in thinners got rid of a lot of the paint that bled under the masking. I'm now fairly pleased with it. The vehicle does look much nicer in its new paint than it did when it was brown. I can't remember what I was thinking when I painted it brown! Work left to do on this coach is the brass door-handles and vacuum pipes from Brandbright and the transfers from IP engineering, as well as the bracing wires under the frame. 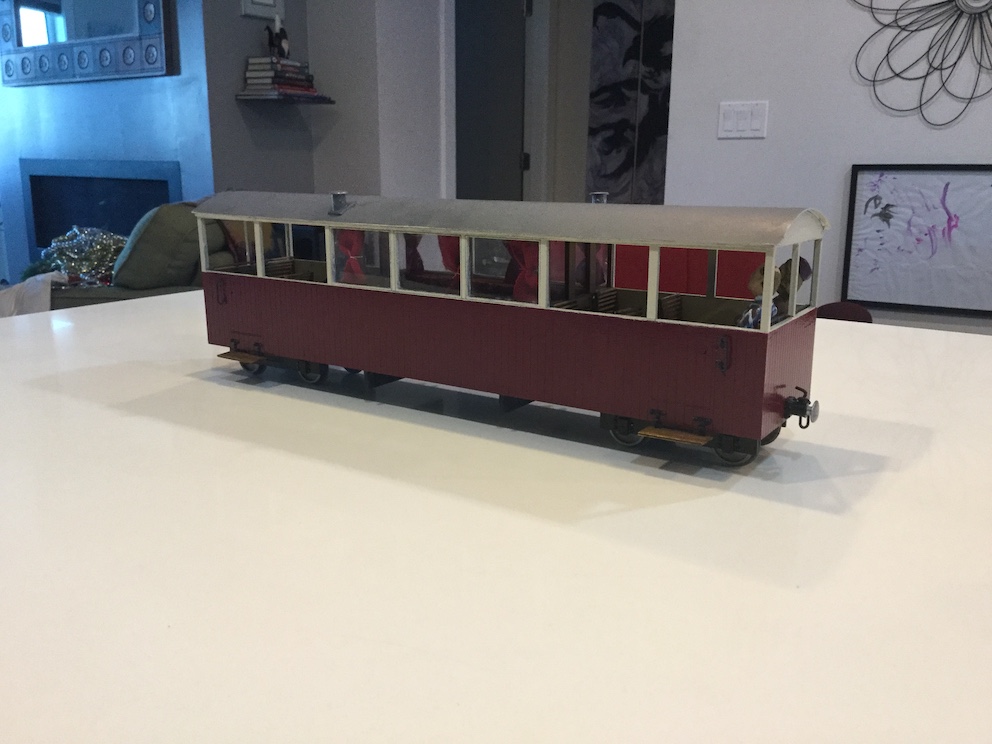 Have you seen Peter Butler's post on his thread

They are brilliant and work very well.
Rod

Yes, I've been following that thread too. Clever use of the brazing rod. I ordered vacuum pipes from Brandbright a while ago though, they're already in the post. For now I'm not going to equip the goods stock with continuous brakes, just the coaches.
Top

The model looks good in the new colour scheme. Glad to hear you were able to repair the damage to the windows without resorting to major surgery on the model.

You didn't say which masking tape you used. If it was the cheap cream coloured masking tape in hardware stores, avoid it like the plague. I found out the hard way very early in my modelling career that it leaves glue residue behind, is close to impossible to remove if left on after painting and usually has a furry edge.

The Tamiya masking tape mentioned in another thread is better for modelling, but do you have a hobby shop that sells it in Yellowknife?

I use the Tamiya tape mostly for colour separations, as it is very thin and less likely to form a step between the colours when spraying the second coat. It's also flexible enough to follow curved edges, although the radius achieved depends on the tape width. Being very thin, it can be difficult to handle in long lengths. I've also had it lift paint though and it is dynamite on waterslide decals, as it is definitely sticky. I remove it straight after painting so it has no chance to leave residue, or set hard. I also had it react with a clear coat on one occasion, but the model wasn't painted by me, so I don't know what type of varnish was used.

Most of my masking now is done with the 3M Scotch blue masking tape from the local hardware store. It comes in several varieties and the best version for our purposes is the one made for 'delicate surfaces', which has a smooth surface and unless they've changed the packaging again has an orange patch on the label.

The adhesive is based on the one 3M use for Post-It notes, so the tape can be left on after painting for several days and it isn't sticky enough to be a risk for lifting paint. I've never had it leave any residue, or become difficult to remove, even after being left on a model for a week or more. You need to be a bit more careful using it for colour separations, but being thicker it is easier to handle and it gives a very clean edge when cut with a scalpel.

Post-It notes also have their uses when masking off for painting models........

ps. You asked earlier about railway terms for underframe parts. In US/Aus terminology, the longitudinal rods tensioning the underframe are truss rods and the adjusting screws in the middle of truss rods are turnbuckles. Not all truss rods had turnbuckles, sometimes they were tensioned using nuts on each end. Truss rods could be supported by two queenposts, or a single kingpost in the middle.
Top

Your Gladstone Car's looking very good indeed - the "pride of the line", as the real thing always was.

I painted my version in vermilion, having read that was the colour used in early WHR days and retained on the Gladstone Car when other carriages were painted green. Alas, it seems that whoever wrote that had misidentified the colour used - analysis of the layers of paint in the most recent restoration indicate that it was
likely to have been a deep red, not the orangey shade I've used. Oh well, it brightens up the train!