I use it too, although the cans are a bit smaller content that a Halfrauds one and the Poundland stuff seems to come in 2 different shades of grey and there is nothing on the cans to distinguish it.

I must give the poundland stuff a try. Sounds like a bargain, even if shades differ.
Ian
Top

The load looks quite convincing and blends well with the wagon. The texture and colours of the slates at the side of the load really do look like miniature slates.

The weathering on the slate wagons has really brought out the neatness of the wagon construction as well.

Which reminds me..... This is one of those times I'm thankful I don't model a slate quarry.

Brilliant job on the slates Andrew….

I threw all my foam board away when we moved, mainly because I don’t have the room now in our new place…..

I will have to come up with something else for mine.
Rod

That was quick, I only sent it to Richard yesterday! Having undertaken to write something for on here I thought it might be an opportunity to promote the forum a little so submitted it for the 16mm website instead. Don't tell anyone, but that last picture's a fake - there's no engine on the front of that train, but there is the nozzle of a steam cleaner hidden in the tunnel!

I notice you've gone for the proper Ffestiniog double "g" spelling of wagon/waggon JMORG - I opted for 1 in the article, but gave the Ffestiniog a double "f", which it probably shouldn't have if I'm referring to it by title, particularly in a 1920s context!


I have no specific interest in slate wag(g)on's but the article is really good. Well done and thanks.
Philip
www.tinyurl.com/philip-trains
Top

Nice plug at the end for the forum

With an extended period off over Christmas I'd hoped to get plenty of modelling done. Alas, life got in the way and that didn't come to pass, but I did make a little progress with the storage of my stock. For the last three years the (WH)WHR carriage fleet has resided in a stack of old wooden storage crates which have doubled as my bedside table. Understandably, even though the crates in question possess a certain vintage charm, my wife has never been entirely sure of the suitability of this arrangement... Fortunately, the Asda post-Christmas sale included lidded storage boxes just the right size to take two WHR bogie carriages (or a selection of shorter vehicles), and for just three pounds. I purchased eight, and filled the first four yesterday evening: 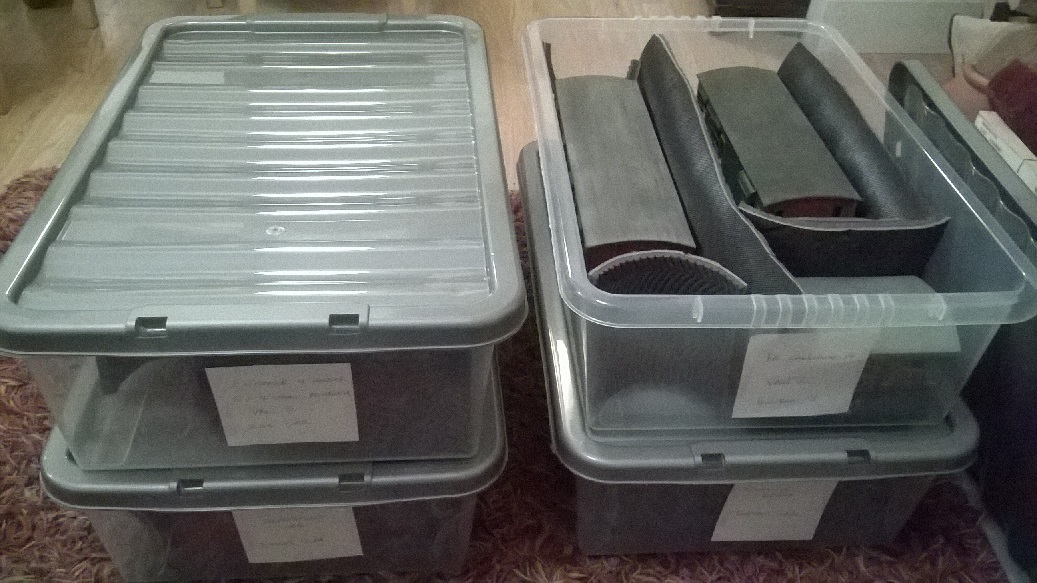 The carriages are kept secure and protected by bits of an old foam bedroll, the curve of which gives a little spring and helps hold it in place. These four boxes are now in the storage area under the house, where I hope they will be safe and well - I may purchase some of those little silicon sachets to help keep them dry...

Ideally, of course, I'd like a nice big shed where the stock can stay on the track all the time, but I'm hoping this will do the trick - the plastic boxes are certainly a lot more portable than their wooden predecessors... When I've made a little more space I'll box up the wagon fleet too - the MOTTLITTs can come in from the cold!

I've seen something similar at IKEA. Not sure of the price or sizes as I didn't have time to investigate. It's on my doorstep so I'll be calling back in to check them out as a lot of my stock is in containers of various sizes shapes and material. I'm sure they'll work out well.
Ian
Top

Nice a neat them Andrew. When Anne and I go shopping at Aldi and the like, I have always looking for anything that will be of use....Anne says I do buy some rubbish sometimes...

At our old address I had a 10x8 shed and it was ideal for keeping my stock in. Unfortunately I don't have one here....

I'd be a wary of using old foamed rubber. I've had problems in the past where it breaks down and sticks to painted surfaces when in direct contact. Yours may be differnt actual material of course but I'd suggest putting a simple wrapper of old fabric ( cotton if poss) around the rubber.
Philip
www.tinyurl.com/philip-trains
Top

No idea what type of foam is used for bedroll, but like Philip I've had problems over the years with the common polyurethane foam, which can break down and damage models. The foam can etch into both paint and plastic as it disintegrates.

I store my wagons wrapped in a layer of bubble wrap and stacked in storage cubes. Bubble wrap is polyethylene and doesn't break down like foam. It's also less likely to catch on and damage small parts. I've never had to buy any, as a lot of stuff arrives wrapped in it.

Thanks for the advice, much appreciated. The bed roll (actually I think it's a yoga mat...) has a plastic-y finish on one side, but the other is some sort of foam. although I've had it a while, it's never been unwrapped or exposed to UV (which I guess might speed its degrading?) and seems in excellent repair at the moment. I'll keep an eye on it and will gradually replace with better material as you suggest...

I should not worry about wagon grey, which is what I usually use grey primer for, being different shades. The Great Southern's colour ran anywhere from quite pale through to slate grey depending on how old it was, and the Isle of Man Railway had the '40 shades of grey' routine down to a science, though officially, their freight stock was supposed to the light grey. In later years I suspected it was a case of what they had to hand/what they could get hold of.


I use it too, although the cans are a bit smaller content that a Halfrauds one and the Poundland stuff seems to come in 2 different shades of grey and there is nothing on the cans to distinguish it.

I must give the poundland stuff a try. Sounds like a bargain, even if shades differ.

Traffic Pattern? What pattern? Spuds out; grain in, but cattle, sheep and passengers are a lot less predictable.
Top

A little free time this morning saw me out in the garden with the simplest of trains - a battery loco and three Big Big train tippers: 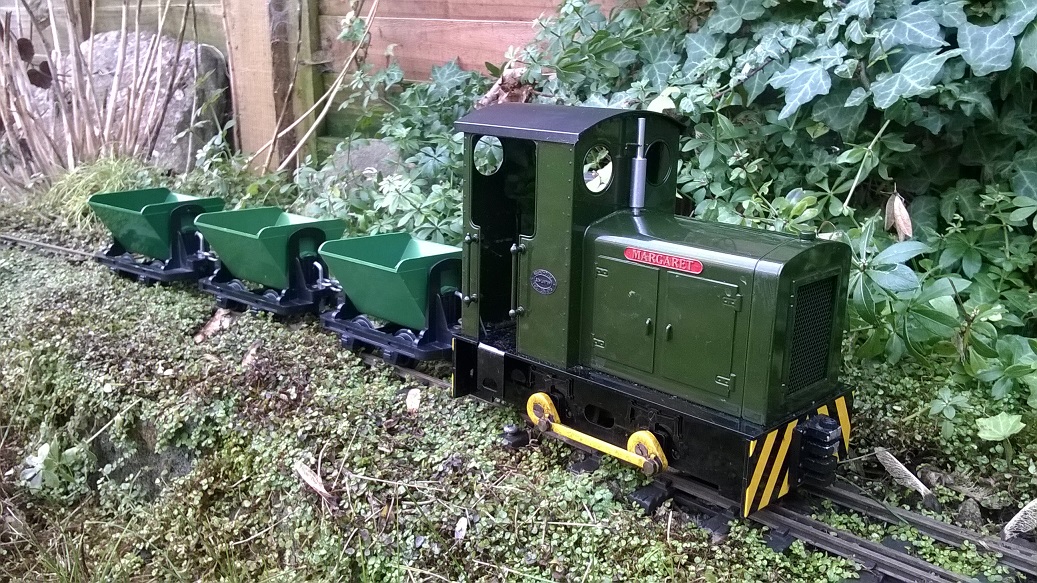 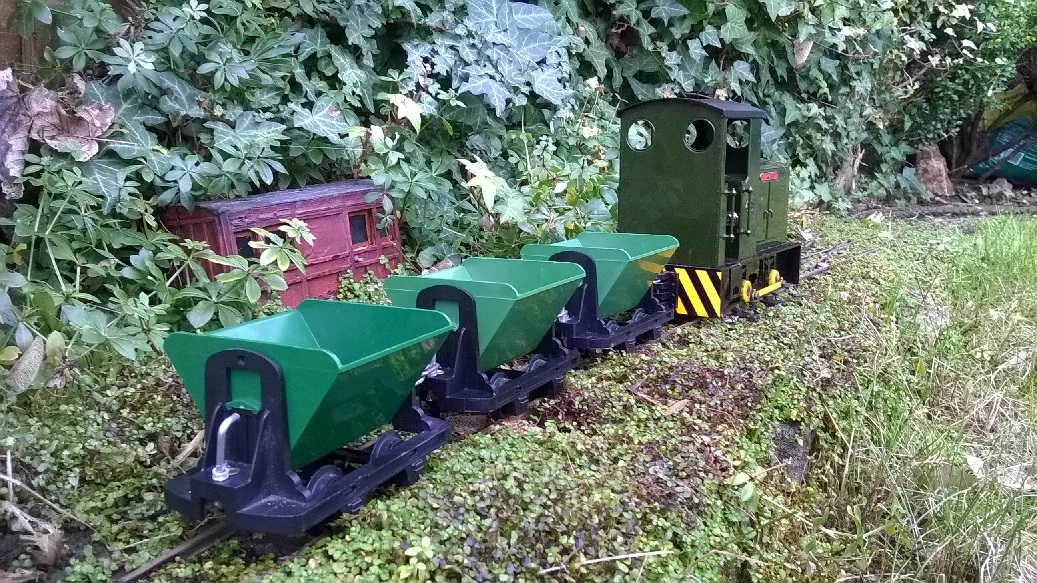 Apart from just being a nice way to spend 10 minutes, the purpose of the run was to test how well the wagons run, and whether the hi-tech coupling modifications (replacing the plastic hook with a bent bit of coat-hanger!) work OK. All went well, on the whole. As expected, they'd benefit from a little weight, so I think they'll run with weighted loads most of the time - I'd originally planned to conceal pockets of lead shot around the frames, until I went to a fishing tackle shop and discovered how much the stuff costs! And the couplings were fine, but required the use of one of the slots on the loco's multi-height coupling, indicating that they wouldn't like to run behind a loco with standard couplings. With that in mind I'll probably make a further modification to a pair of wagons to go act as coupling converters at each end of the intended rake of nine.

I've been slowly collecting these little wagons over several years but didn't want to make the modifications to the couplings until I knew it worked well, in case I decided to re-sell them. Test concluded successfully I got chopping (or unscrewing, depending on the vintage of the wagon): 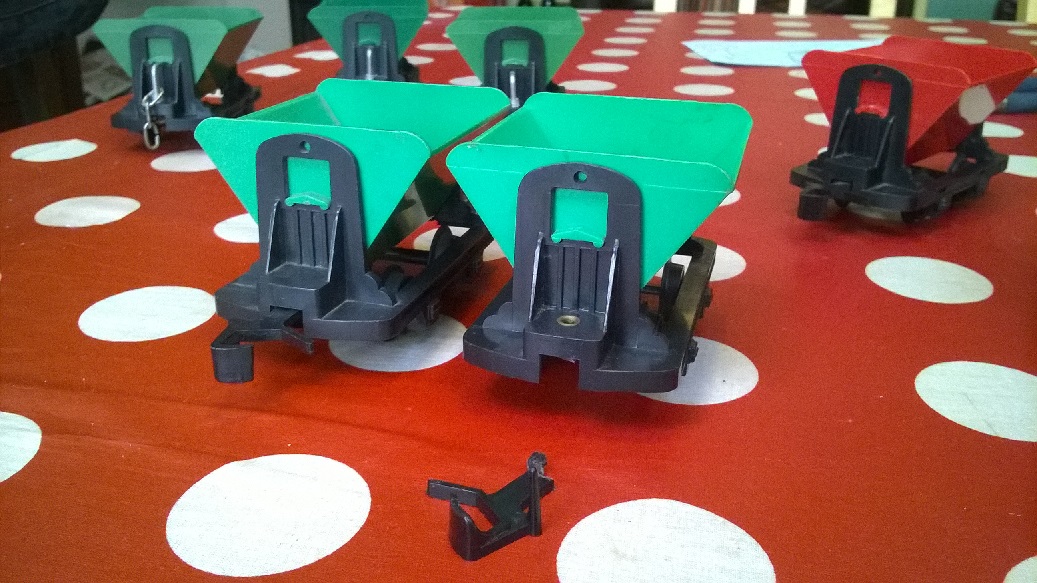 And, now they're a little shorter, they'll fit neatly into this box file! You can see why I want 9 of 'em! If anyone's got a spare they'd like to part with, drop me a line! They'll go into store now, and the project will proceed on an "as and when" basis between other things... 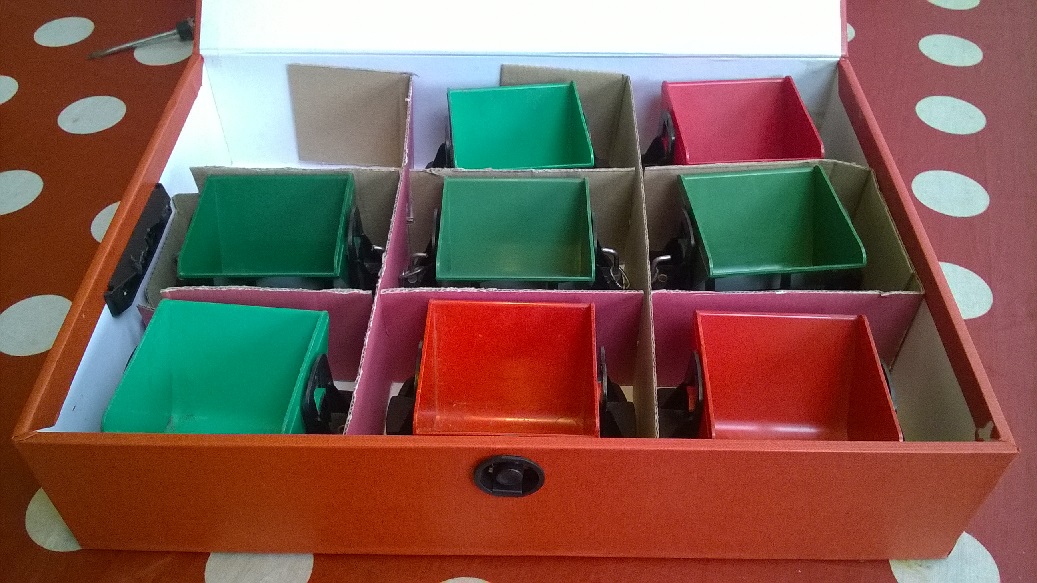