Having recently had trouble with the some of the FBGR’s areas of timber decking, we had started to replace parts of it.

The main problem was the rotting of the timber – some supports lasting less than 7 years.

We started with a couple of rectangular areas using plastic rain water pipes for posts with mainly timber (with just a few bits of plastic) structure and timber board decking.

The next area to be reconstructed was a bit more complicated, so we have been looking at alternatives.

We had acquired a few offcuts of plastic fascia of different sizes, as well as few bits of plastic board, and have been experimenting by screwing bits together and then testing the strength.

We did appreciate that a straight replacement like-for-like of plastic profiles for timber sections was unlikely to be practical, and that a slightly different approach to the structural arrangement was going to be required.

A survey of the area to be rebuilt was prepared, and onto this we have done a plan of all the different bits required. This was prepared to get some idea of the arrangement and for the pricing and ordering of materials. 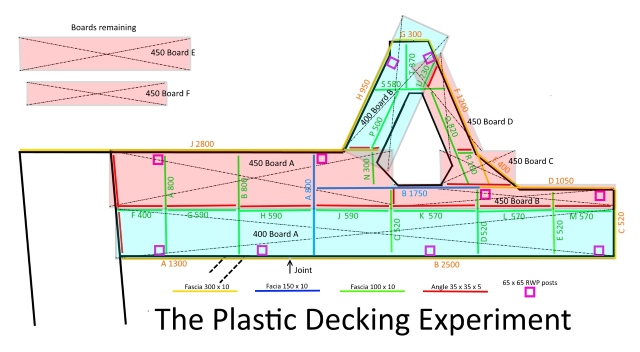 Generally the Railway is about 30cm (1 foot) above the adjacent paths. Although the stuff used in and on the railway is not heavy, the decking has to be capable of being stepped on.

Having priced this up, I did a quick comparison of what it would have cost – I was surprised to find that the overall cost of using the plastic would appear to be very similar to using timber.

I have been searching, but can find no other instances of anybody using these materials. So I wonder if it has been tried before - and failed.

HAS ANYONE EVER TRIED TO USE PLASTIC FACIA IN THIS WAY BEFORE, AND WAS THERE ANY PROBLEMS WITH CONNECTIONS, CREEP AND EXPANSION/CONTRACTION?

NEXT will be finding the money to be able to put in an order for the material, most of which comes in five metre lengths. Nowadays, most of the railway expenditure is spread out over an extended period. So we have a few weeks to consider if the investment (of about £150) is going to be wise.

JOhn,
Like you I have used uPVC drainpipes for supports and that is quite successful. I haven't used fascia board in this way, although I have considered it. My main reason for not going that way is the tendancy for it to sag unless given a lot of rigid support - just try leavng a 2ft length on a couple of bricks for a week or two with some weight in the middle. Personally I'd want to be lookng at a grid of uprights at probably about 6-9" centres and apart from the cost and complexity of that, trying to level them all....!
Philip
www.tinyurl.com/philip-trains
Top

I have used plastic facia boards on a house and there was no major issues with expansion or contraction.
I used a good outdoor grade instant grab adhesive to secure and silicone in the joints. I left about 1/4 inch expansion gaps and nothing seemed to move.
If at first you don't succeed, use a bigger hammer!
Top

I think Southport model engineering club built their 16mm railway using plastic pipe for supports with plastic fascia for longitudinal supports and tops. They used to have a series of photographs on their website showing construction and landscaping, but I can't get the link to work from their main site at the moment.
I have now found a link to their post on this site https://gardenrails.org/viewtopic.php?f ... ort#p92883
Regards
John
Regards,

I've used plastic pipe as uprights to support filcris rails. 18 months on and it's still where I put it. 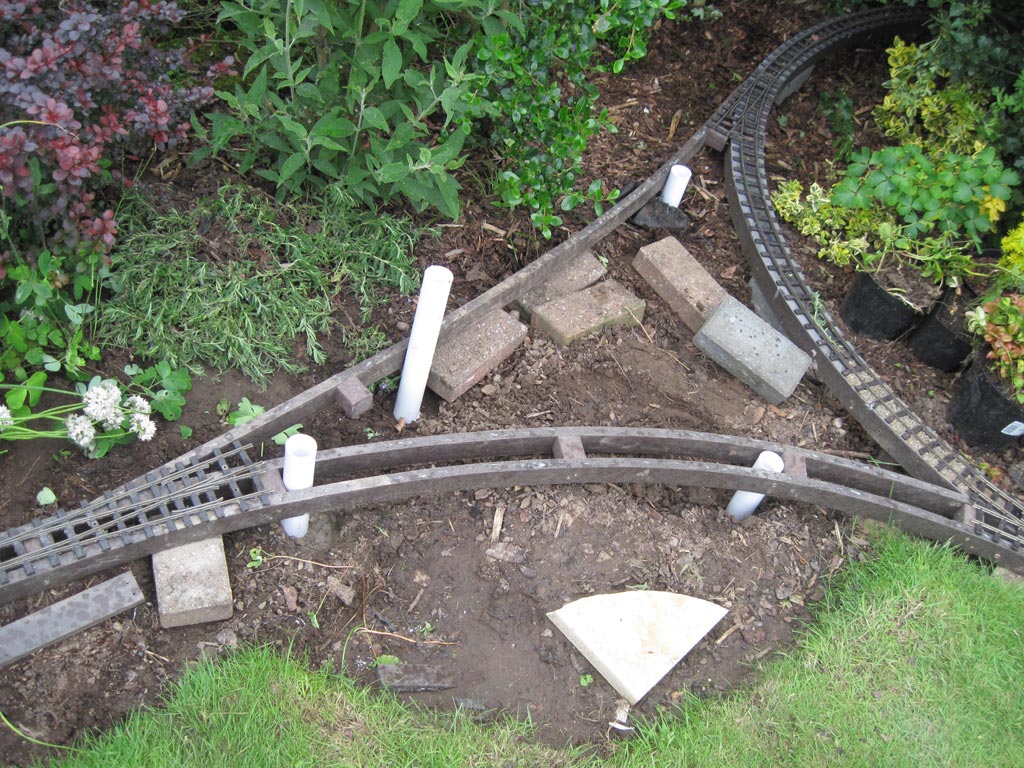 Nothing has put us off so we decided to start.

The Material was ordered on Monday and turned up Thursday, but a couple of lengths of one item was not what I had expected, so has been changed - I thought I ordered a couple of lengths of 35mm x 35mm x 5mm thick angle section - I had been told that 35mm x 35mm was not available but what turned up was 40mm x 40mm x 2mm thick section - this was just a corner flashing and not a suitable structural member. I was then told that no angle sections 5mm thick were available so I substituted with 100mm deep fascia, of which I had already order several lengths. LESSON - be very sure of exactly what you are ordering. 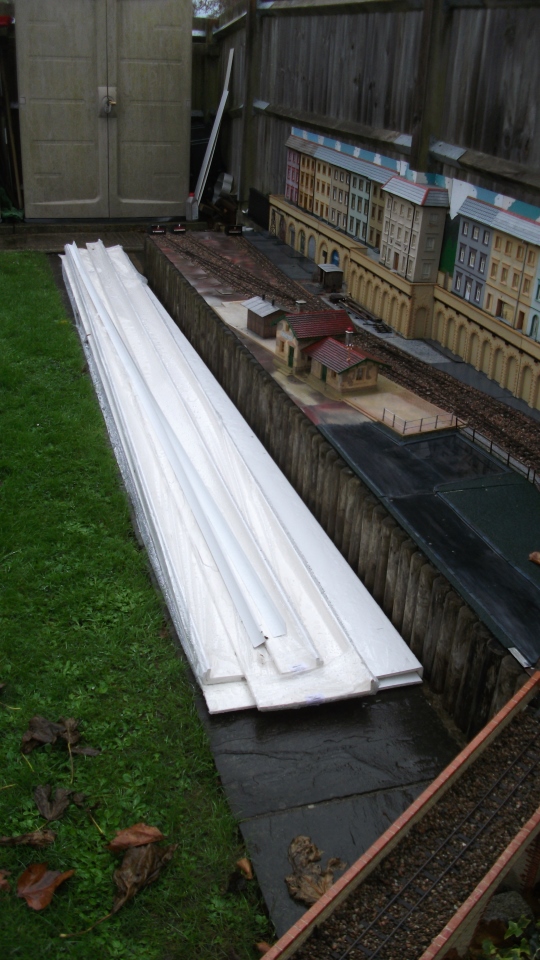 This is the stuff shortly after delivery. Being 5 metres long, it takes up a bit of space but just fits in the length of the garage.
Drawing was refined (improved) to ensure that none of the 9mm thick board has to span more than 450mm in any direction, and all the edges (save for some small corners round the ‘trees’) are supported. Also the use of 35mm x 35mm angle has been replaced with 100mm fascia. 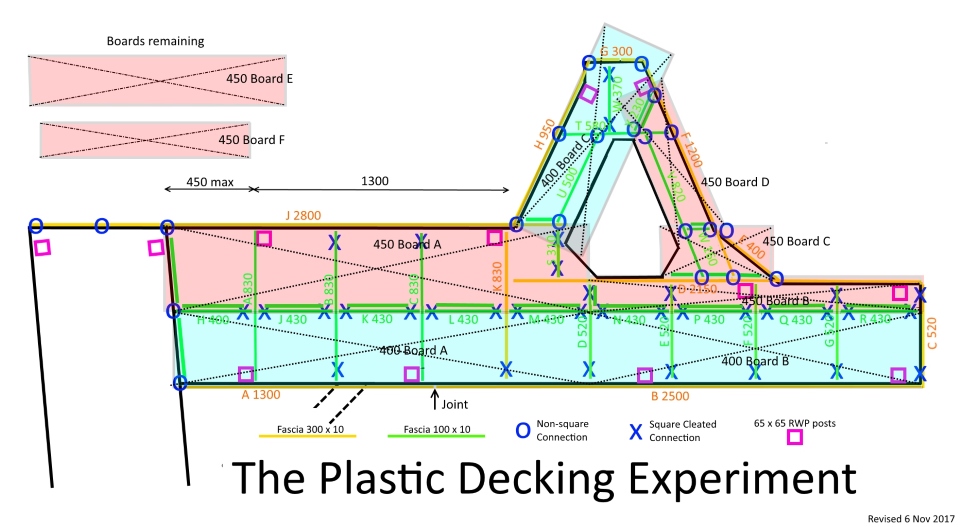 I have in mind the details of the various connections between the various sections, but I have not draw these out. Many, many years ago I worked as a structural steelwork design draughtsman, and I think many of the connections will be very similar form. I can soon knock up a sketch should anything complicated be required, or should I want to illustrate a point - as now. 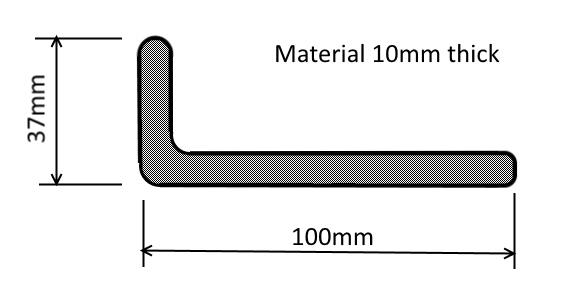 Although it would have been nice to start with a simple straight forward bit, we started in the section that has to be notched out on the skew to support the end of the foamboard clad viaduct (or is it a three arch bridge?) This member is numbered yellow A 1300 on the plan. The notch in the side board to take the end of the four-by-two that forms the supporting structure of the viaduct (bridge) was a little deeper than is required so that a bracket can be fitted and adjusted to get the support level correct to the millimetre. The gaps around the end of the viaduct (bridge) will require some infilling where it used to butt up against the old log-roll.

Having cut this notch out of the flange on the 300mm deep fascia we noticed that the section became rather flexible. In order to stiffen this section, which must be straight to line up with the edge of the decking, we inserted a length of 100mm deep fascia fixed horizontally at a position that will be below the level of the subsequent fixed cross-members. 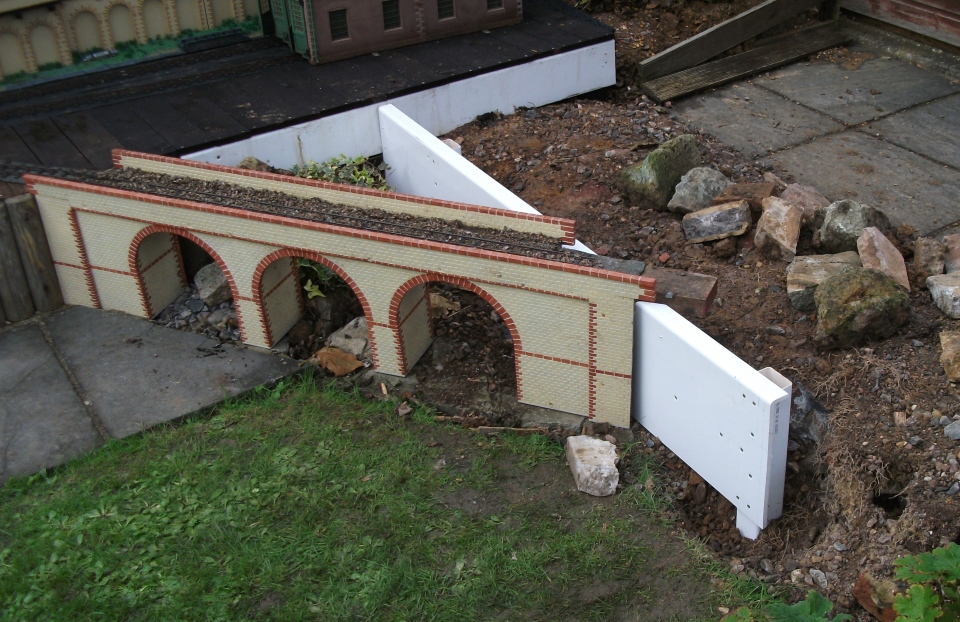 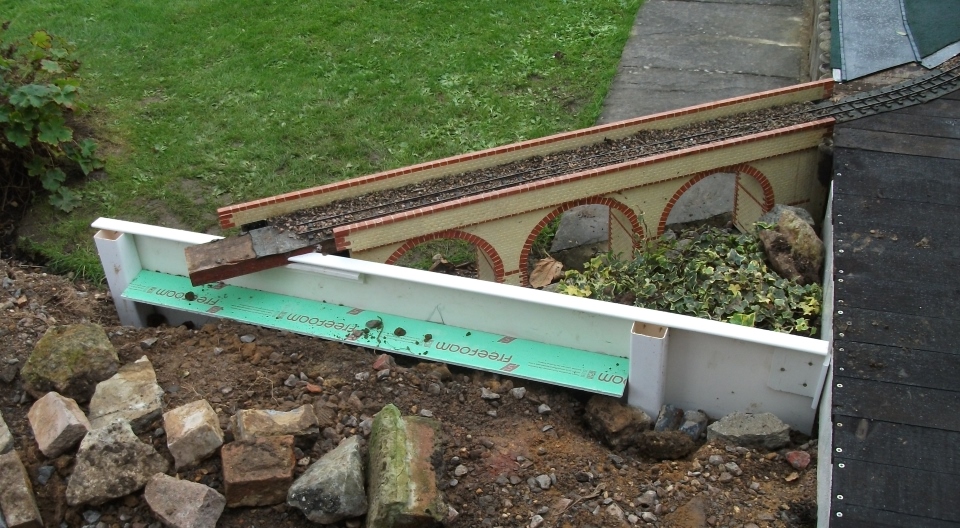 Where the 300mm deep fascia comes up against the edge of a previously rebuilt section of the decking (under the loco shed) there was a length of 150mm deep fascia supporting the end of the boards. This is one of our previous experiments in using this material. A short piece of 100mm deep fascia was used as a bracket at this position, but the joint is not square, so I am likely to replace this with a purpose made bracket/cleat.

Next Tuesday will be part yellow B 2500, which has to be dead in-line with the previous section and line up with the bridge over the footpath.

The framing is beginning to take shape.

Getting everything straight, level, and parallel to other parts is not something to be rushed, but I am sure that it should ensure that subsequent parts fit more easily. 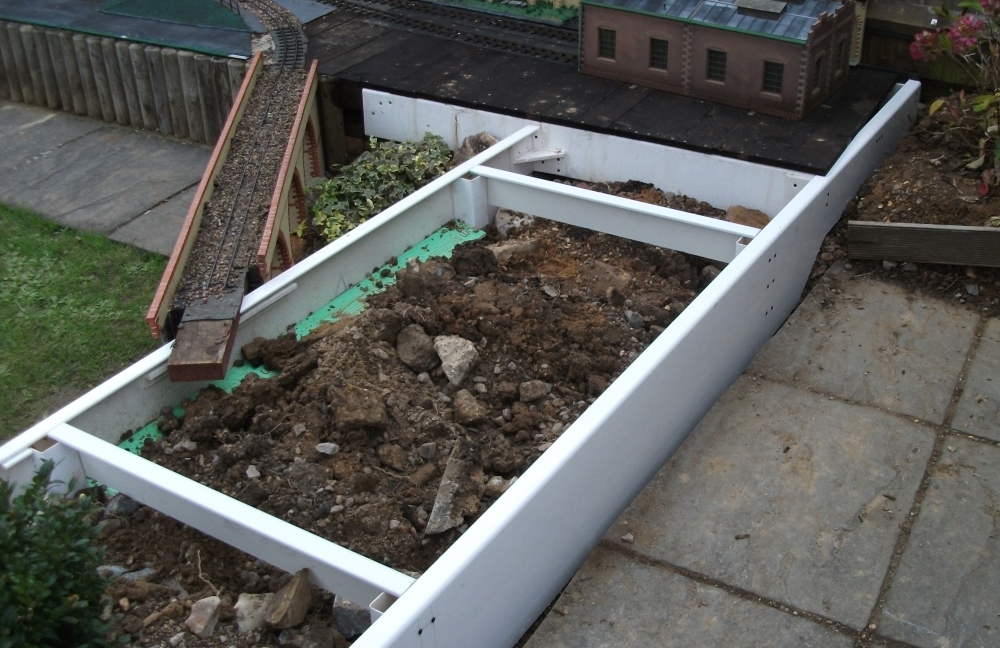 We have changed over from using wood screws started in small pre-drilled holes to using plasterboard screws. These have a black chemical coating and can be inserted without a pilot hole. Also the very sharp point helps prevent parts pulling apart during screwing in, although it is still best to clamp bits together before screwing. We are using 25mm long, and I bought 1000 from Screwfix for under £7. Also a nice little electric screwdriver recently picked up from ALDI for £13 is going to become very useful – it says strictly for domestic use but seems quite powerful and well-built.

Are you going to overclad the exposed glaring white bits, when you've finished?

Re those Aldi screwdrivers. I bought one a few years ago when I was building my timber trackbase, and whilst its probably fine for your relatively thin plastic, mine didn't like wood and soon stripped the gearbox, so be careful.
Philip
www.tinyurl.com/philip-trains
Top

The overall plan is that there will no white bits showing when we have finished.

The outside vertical faces will be painted black.

The decking, which starts off all white, will eventually be completely filled in between the ballasted track-work with some form of scenery.

Your certainly putting a lot of thought into the construction process,and it all looks very clean and well fitted. Watching with interest, when its finished I wish we could fast forward ten years to find out your thoughts.
Grant.
Top

I have a cheap 12v Argos screwdriver that has been going for years being used for jobs like this. I prefer to use this now over my more expensive and heavier Makita 18v which hardly get's used after discovering the joy of SDS drilling (another cheaper branded drill that goes through walls like they are made of cheese).

If you only plan to use a tool rarely you don't always have to buy an expensive branded product.
YouTube Channel
Top

More external and internal framework has been happening. 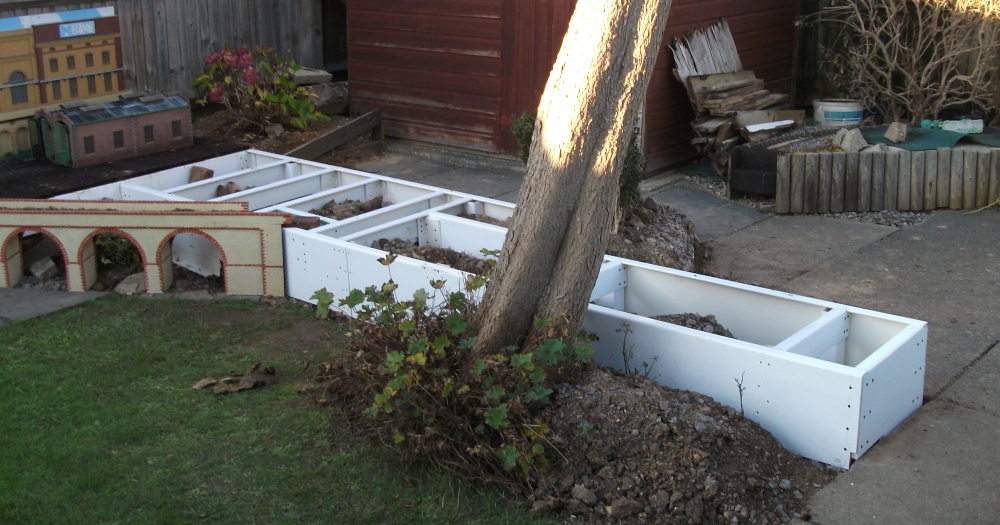 The more the parts come together, the stronger it gets. But still great care is needed to keep everything flat and square.

All the outside square parts are now in place, and I will be trying to get most of the internal members in these areas done to give a good rigid base before starting the angled section round the little bushes (behind tree).

Work continues, and a major portion of the framework is now probably complete. 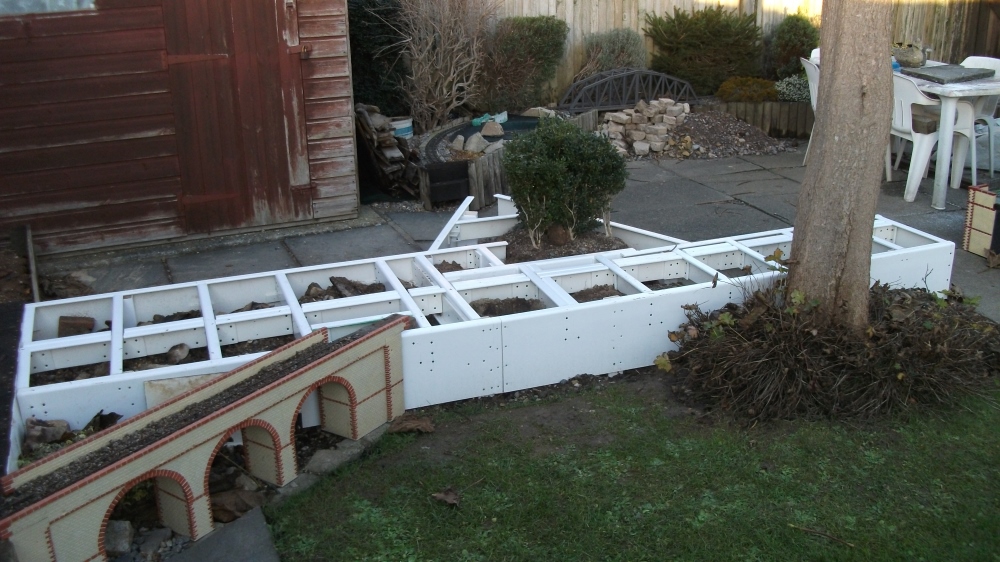 Completing the framing round the bushes is next, and then it will be sorting out the bridges abutments. I am hoping to be able to use the (removable) bridge that I only rebuilt last year without much alteration. The other (removable) bridge, which is quite heavy and has a point on it, I was planning to rebuild anyway, probably just reusing the deck and track.

Today we inserted a couple more bits of framing, and the first piece of decking – 40cm wide and just under 2 metres long. We had to scrape the ice off the top of the frames when we started this morning. It looks like the box of 1000 plasterboard screws are not going to be enough. 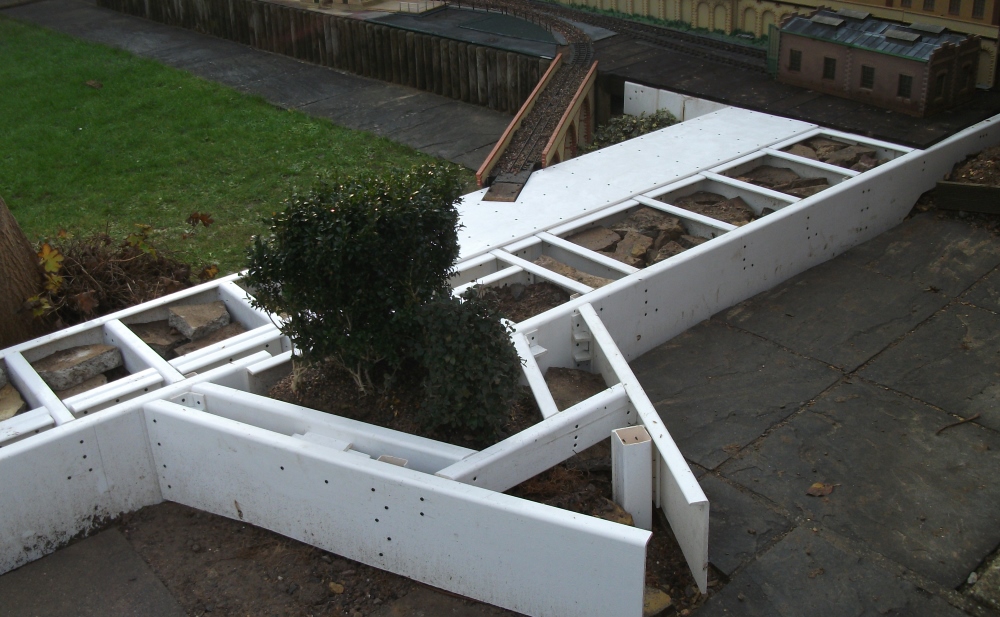