Lastest product from the CCLW

A very popular starting point for Live Steam. With their low cost comes a number of problems which can be discussed here
Post Reply
24 posts

Lastest product from the CCLW

You may recall that I placed a special order for a Thomas Telford locomotive at the Peterborough show. I had persuaded David Terry to sell me an unassembled Thomas Telford with the idea of seeing how feasible it would be to construct using bolts & nuts, accepting that there may be some soldering involved (even the Roundhouse kits require the bodywork soft soldered together) and the possibility of having to use some rivets to hold the side tanks together.

In due course a box was couriered from Mamod which essentially contained the unassembled locomotive plus a supply of plain & black rivets to complete it. 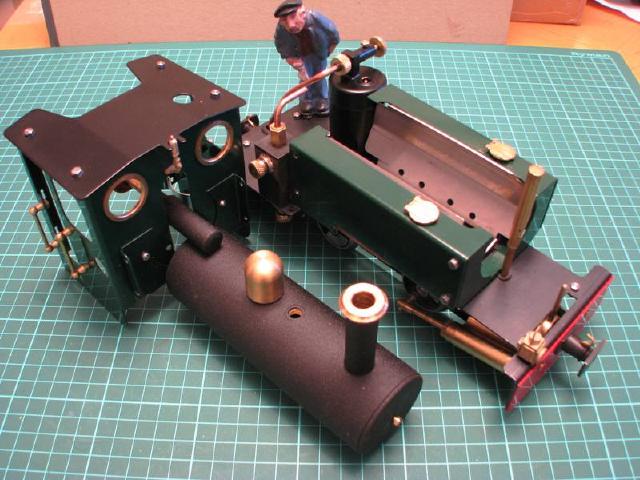 The build process highlighted problems with a couple of components, which were quickly replaced. However there was a delay in waiting for new stock of one item, and this coincided with the Works Manager (me) being otherwise occupied with volunteering on a full size steam locomotive, thus the Works were effectively ‘closed for the season’ and this project disappeared ‘off the radar’. Fast forward to the Llanfair show and the outstanding component was collected in person. 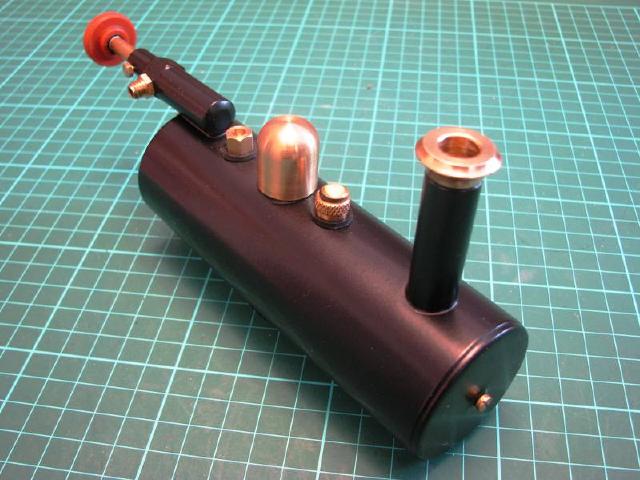 The locomotive has now been completed, without a single rivet being used, and initial running-in trials completed on blocks plus running indoors on my test loop of Mamod track. It is planned to visit an outdoor garden railway soon for more running and to get some suitable photos & video action hopefully.

Here are the ex-Works photos of the still unnamed locomotive. 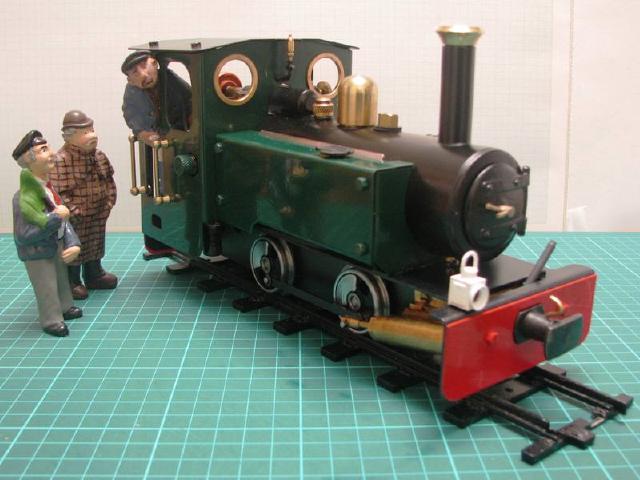 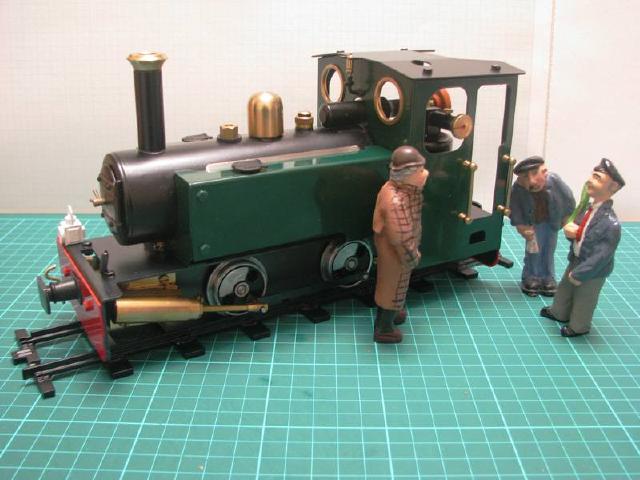 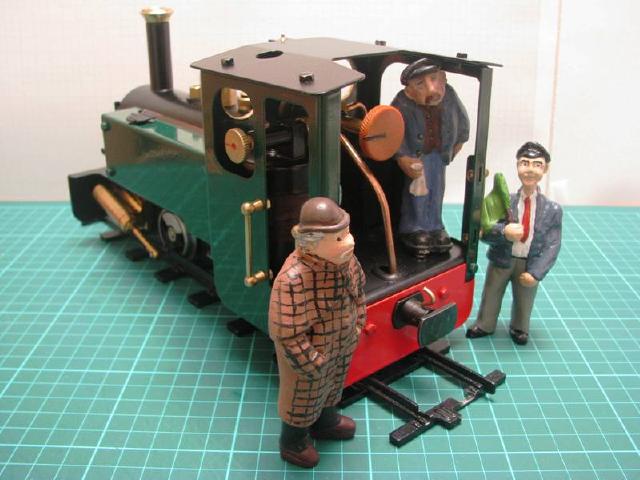 I've not been in touch with Mamod recently but it is my intention to provide them with a set of illustrated instructions from my build experience. However I understand that my unassembled Thomas Telford was probably a one-off and that they are currently considering producing a kit version of their Brunel locomotive.

Will be very interesting to see how your TT performs, particularly if you have a chance to try it on track with the odd gradient.

With Grateful Thanks to the General Manager David Hippey ( www.hglw.co.uk ), the Houstoun Gate Light Railway hosted a visit from the Chris Cairns Locomotive Works team today to complete the trial running and certify this locomotive for 'mainline' running.

I now have an appropriate photograph of the completed locomotive to finish off the assembly instructions which will be forwarded to Mamod. I should have enough video clips from today's running to enhance an introductory video about this locomotive, thus you will not just see it running around my kitchen, like my previous Mamod locomotive introductory videos.

I was also privileged to see some more exciting laser cut items that David is developing for his range of budget kits & accessories.

(edited to get a working embed video code, which appears to only work in Google Chrome so direct URL now added)
Last edited by Chris Cairns on Thu Nov 20, 2014 9:30 am, edited 1 time in total.
Top

Sorry Chris, all I get is a big grey square with a bit in the middle saying I need a Plug-In, but no link to anything.
Philip
www.tinyurl.com/philip-trains
Top

philipy wrote:Sorry Chris, all I get is a big grey square with a bit in the middle saying I need a Plug-In, but no link to anything.

For whatever reason (probably because we do not pay to stop the advertising) this myfreeforum uses the older version of the phpBB Code which does not display the current embed YouTube iframe format. There is a work round that works for me in Google Chrome but now not in IE9. YouTube normally provide an old embed code option but it strangely has disappeared from my videos again.

So I've added the direct URL to the above posting so you can view the video.

Cheers. That looks good. Interesting sound from it, bit like a steam diesel!
Philip
www.tinyurl.com/philip-trains
Top

During the running-in trials I found it ran better & slower fitted with Summerlands Chuffer but more importantly the exhaust back pressure extends the running time by approx. 30%

It is actually a SCGP1-25 Chuffer which I know is the wrong diameter for these Mamod boiler chimney's, but at £25 a pop they soon empty your budget if you fit one to every loco. As I only run one loco at a time it is easy-ish to transfer this push fit Chuffer into the required loco - just got a spare exhaust pipe for an Accucraft to modify that for this push fit Chuffer.

I presume the Houston Gate track is pretty flat. Were you able to get the TT to run slowly without stalling?

Yes the Houstoun Gate Light Railway's 'mainline' is effectively a large level dumbbell circuit but does have a couple of tight curves to test manual locomotives.

Due to the weather & time of day there was not really any time for a practice so this outtake is from the 1st run , which was both getting used to the correct settings plus clearing the track as we had some errant leaves & loose ballast. That is why I'm in the shot as the train got stuck at a set of points.

On the 2nd run I fired it with a butane/propane mix due to the temp, and David experimented with his advance driving technique of fixing the regulator position and adjusting the reverser valve to suit. This actually worked out very well with the train quite happily completing several circuits without needing tweaked. Here is the reverser valve setting we finished up with, using 1 turn of the regulator to pull a Mamod tender, open wagon & passenger coach. 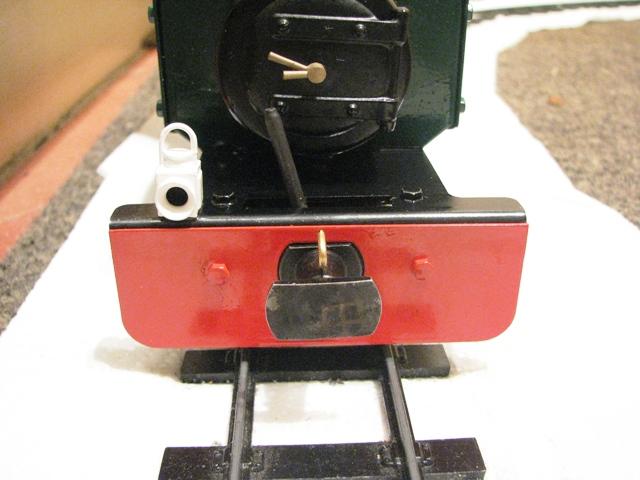 During both runs there was never any tendency to run away and no speed bursts either (I'm using Roundhouse 220). So I was very pleasantly surprised with the good running given the previous feedback.

I need to clean up my 'workshop'/kitchen (again!) before I can get enough talking clips to complete an introductory video.

The secret to making the TT easily controllable on more challenging tracks may well be to radio control the reverser. I did consider it myself and couldn't see an easy way to get the linkages from the cab to the front. However I'm sure there are more imaginative modellers who can come up with a workable and elegant solution.
Top

This is how I added radio to my SL1, I used very small radio gear and its proved to be reliable, I know the TT is different but I'm sure the same provokes could be used.
I love driving my Mamod with RC, I deliberately added a 1 in 40 hill to make me drive it!

http://gardenrails.myfreeforum.org/about9010.html
Put that light out!
Top

I like the way you routed the mechanism, very unobtrusive.
Top

David's advanced driving technique works equally well with gradients. He previously told me a story where he took his IP Jane to a Garden Railway which has a notorious up & over hill. Whilst being harangued by the collected onlookers he set the IP Jane off up the hill and the onlookers were speechless when it did not run away down the hill on the other side. Most people are used to seeing/operating run away Mamod SL's but the advantage of using the reverser valve combined with a separate regulator is it restricts the exhaust as well thus affording more control. I've only used this technique on one of my oscillators which has a very coarse in cab regulator but I'm going to use it more when running my Lumber Jack, particularly as the regulator is not as easy to fine tune when the cab roof is fitted.

I'm still intrigued as to why others were/are experiencing runaways with these Thomas Telford's as essentially it is an improved Mark II and the differences should not affect its running that badly. Against the recommendations I'm using Roundhouse 220 oil and a much smaller quantity in the lubricator, plus taking advantage of the improvement in slow running & extended running time by using a Chuffer.

David was showing me the Deltang RX60-1's that he is trialling with his electric locomotive kits. The small size is very impressive when you realise it has an onboard ESC as well, although the disadvantage at present is it needs a minimum of 3V which is a restriction with David's 2 x AA battery boxes (short running time) so he is considering a work round for that. We also discussed your Deltang controlled Mamod SL - you will need to explain which Deltang model you are using and how you have achieved the servo control please.

From my aircraft & helicopter Radio Control experience I have settled on the Orange RX receivers, which at just over £7 for the latest R615X from Hobby King UK (when they have them in stock!) cannot be beaten on price, and I've never experienced any problems using these receivers with the budget MLP4DSM transmitters - just got some more R615X's from Hobby King UK to upgrade the rest of my 27MHz controlled locomotives when time permits.

I found the deltang units by accident! However, I love how small they are! I have a basis in electronics and computer programming so I'm not easily put off by a bit of soldering! So I fitted one first to a big big chassis with 4AA batteries, my next project was a IP engineering Kate model, designed for 2 AAA batteries, space being a problem I fitted 2 CR2 batteries, giving me 6 volts in less spaces than the 2 AAA batteries!
So, fired up by my sucess I took the same approach to the Mamod, I used 2 CR2 batteries one under each side of the cab floor, I used the RX60 because I had one to hand, connected a £2 eBay servo and it was all working! I can't tell you how long the batteries last because I've never had a steaming session long enough to run them flat!

I'll take some pictures of the IP Kate tomorrow as I'm sure the same principles would apply to the Houston Gate locos, I get about 1 hours run on my kate

Sorry for hijacking the thread slightly, hope the info is of use.

Dave
Put that light out!
Top

and that's probably the same reason I can use my Accucraft on my garden track with its gradient and tight curves - the radio control of the reverser as well as the regulator. When I had a Bertie all I could R/C was the regulator, so it tended to go in fits and starts. You could sort of predict when to open and close the regulator in advance of a gradient or curve, but the fine control was missing.

As for why your TT doesn't race away while others do, I've no idea. As you say, its basically a Mk11 with a bigger body. The only differences I'm aware of are the hotter burner necessitating routing the steam pipe away from the flame. Interestingly it was 2 years ago tomorrow that Mamod were first showing the TT in public at the Warley Show.