A very popular starting point for Live Steam. With their low cost comes a number of problems which can be discussed here
Post Reply
48 posts

Chris Cairns:104009 wrote:Picked up one of Rob Bennett's 'Brunel' figures at the recent Llanfair show. 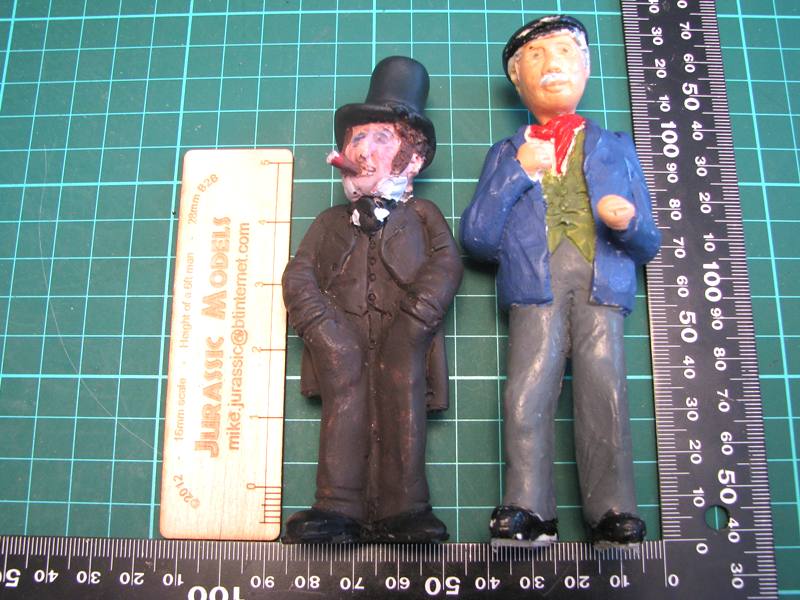 As you can see he is not 16mm scale being taller scalewise than his actual 5' height.

The other figure was a clearout from Modeltown - probably an ex-display 7/8ths figure as he still has glue on the bottom of his boots.

Hello S.A., I am afraid the locomotive is suffering a slight case of 'engineering limbo' at the moment! I am trying to get a small back-log of jobs completed and I am nearly done, The part of the conversion I have done to date I am very pleased with. I cannot continue the running in as half of the engine is off and the engine tips up very easy....
Regards, Bill/Rubery

I've very kindly been sent a modified Brunel lubricator (has a continuous steam pipe with a drilled 0.5mm hole) by Mike Wakefield to retrofit to my poorly Brunel.

Currently do not have workshop time available to disassemble my Brunel to attend to this, but worth pointing out that the drain plug used by Mamod does project into the open void of the brass block thus reducing the overall capacity. Currently my Brunel will only run for so long before stopping, and only after refilling the lubricator will it start running again.

What grade of oil do people use in their Brunel's? Mamod supply 460 steam oil, but in conjunction with my better running experience on other Mamod/MSS's I've converted to Roundhouse 220 steam oil.

Hello Chris, I use the stuff from Brandbright what ever that is. It is described as "thick Steam Oil"....My locomotive work on alright. Years ago I brought some molyb...something..disulfite...which I used in my motorcycles. I kept some and put it in the steam oil! It works...
Regards, Bill/Rubery

If you're a member of the 16mm NGM you'd have probably read the Brunel article in the latest (the delayed August 2014) 16mm Today.

I read Dave Kirby's article over the weekend so this morning decided to have a go at a few of the alterations he'd detailed as my Brunel, despite behaving impeccably all summer, had proved a bit difficult to get good steam pressure the last couple of outings.

Dave Kirby listed the changes he'd made to improve steaming. In essence these are:

Now his track appears to be 45mm and mine is 32mm so I found his improvements 1) and 2) were  impossible on my Brunel as the burner would foul the wheels.

Which left improvement 3). I first studied the photos accompanying his article. In doing so I realised that as the boiler is simply clamped to its mounting all you need to do is slacken the clamp, put spacers around the clamp's circumference to raise it a small amount (I used 6BA brass nuts),  replace the boiler so its sitting on top of the nuts and finally re-tighten the clamp. You don't need to fit spacers under the clamp at all.

The result: I was able to turn the gas up further before the flames start to lift. I easily reached 40 psi and the loco ran well. Unfortunately only on the rolling road so far as the weather outside is decidedly grim.

Thanks for the suggestions. I look forward to trying them out.
http://www.youtube.com/user/KandNWLR?feature=mhee
https://www.facebook.com/kandnwlr
Top

I'm not the first to suggest this easy fix. Back in the May 2013 edition of 16mm Today Peter Aldridge did exactly the same thing as me - place some nuts to act as spacers under the boiler and the burner behaves a lot better.

I don't recall having read the 2013 article before today and that particular edition of 16mm Today of mine looks awfully pristine - none of the usual coffee stains and oily fingermarks - so perhaps I didn't read it in detail back then. May last year was a particular hectic period.

Anyway, if you have a copy of the article I urge you to read it. The photos were taken on The Portland Light Railway where I've also run my Brunel, and I can confirm it tackles the whole track, including the spiral, with ease.

I know Dave, he is an NWAG member, and I can tell you that his Poolend Garden Railway is 32mm gauge, as indeed are all of the lines that he is running his Brunel on in the article.
"What the hell is that?"
"It's a model icebreaker sir."
"It's a bit big isn't it?"
"It's a full scale model sir....."
Top

Just re-read the May 2013 article, plus the August 2014 article, and got my Brunel out of storage for some measurements.

Looks like we have had another Mamod 'improvement' which means, as Mike has already pointed out, Dave Birkby's modifications will not work on other versions.

Certainly some 'food for thought' when I get the workshop time available to fit the modified lubricator, and will probably be rotating the boiler around as well.

I tried the BA nuts under my Mark one Brunel boiler though I did not notice any improvement to the flame. The Brunel that I am currently converting to 7/8" scale is the Mark 2 version with the burner right in the centre of the boiler. As a result of this there is no longer a slot provided for owners to move the burner over! I painted calibrations on the gas control nob and the regulator housing for fine control. In the current issue of SMT if you look closely at the photo's of what the 'Brunel' owner has done I believe he has directed the exhaust pipe DIRECTLY to the chimney area for steam effects. Judging what comes out of my exhaust pipe I wonder what state his burner wicks are in with all the waste condense that comes out of this pipe?!!........
Regards, Bill/Rubery

As we are all aware, Mamod have a policy of "continuous improvement" which has resulted in many tweaks to the Brunel since it was first launched.

From talking to Mamod I understand the latest Brunel now has a lower centre of gravity (boiler body shorter in height, thicker side frames, lower cylinder, etc) but there's been relatively little change to the burner.

Bill, any chance of a photo or two of the underside of your new Brunel so we can see how the burner has been positioned under the centre of the boiler?

I´m beginning to wonder what Brunel I actually received. I bought it a Llanfair 2014 on a whim. Alright, I admit it. I really collect vertical boilered locos and couldn´t resist.
http://www.youtube.com/user/KandNWLR?feature=mhee
https://www.facebook.com/kandnwlr
Top

I´m beginning to wonder what Brunel I actually received. I bought it at Llanfair 2014 on a whim.

They have consistently been improved and now are more stable with both the lower centre of gravity and the 4:1 gearing, so the loco you bought in Llanfair is likely to be a good 'un.

However, the numerous small improvements since the Brunel's launch means anything you read in an article may or may not apply to your own loco. Which says something considering how simple they are.

Before I get around to pictures I would point out that the burner sits right under the boiler chamber and one wheel is slightly rubbing the burner metal body!
Regards, Bill/Rubery

kandnwlr wrote:I bought it a Llanfair 2014 on a whim.

Should be the current Mark II then, as they were close to selling the last Mark I's after the Peterborough show earlier in the year.

Must admit I did not look too closely at the Brunel displayed on the Llanfair stand (my focus being on the Thomas Telford), and when David Terry asked me if I was going to upgrade my Brunel to the Mark II standard, as Mike Wakefield has done, I explained that it would be even more expensive as mine has the earlier style of dual gauge axles which are not compatible with the Mark II gearing.

I've been generally disappointed with the go then stop running of my Brunel (similar to the original running of my William & William II), and I'm hopeful the modified lubricator is the solution having already applied other tweaks.