A very popular starting point for Live Steam. With their low cost comes a number of problems which can be discussed here
Post Reply
9 posts • Page 1 of 1

At age 15 I bought my first loco, an SLK1. It was £50 and earned with the proceeds of my first summer job, cleanup in a roadside cafe at £1 an hour, so in terms of earning power cost me more in sweat than a Wrekin would today. For seven years "she" was my one and only loco and ran everywhere, until Dark Horse arrived in 1993 and she became reserve engine and was eventually sidelined for an overhaul and rebuilt. The round tuit never arrived, and she spent many years in bits gathering dust in a biscuit tin on the workshop shelf, until finally DLRDan offered to do the job (and a repaint too). Off went the bits to Blyth, and they came back last month looking like this. 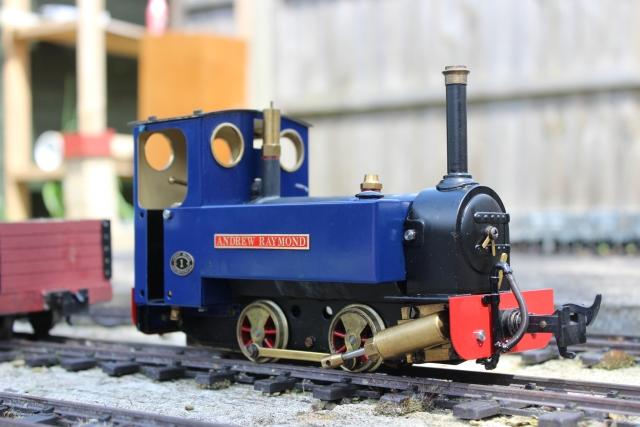 Well, after that the only thing to do was fill 'er up and set fire to her. Steaming mamods is a bit like riding a bicycle- you never forget where everything goes and what it does. Of course, if it was 20 years since you last rode and it's a very different engine with bits it didn't have before (like a straight-thru lubricator) or bits that aren't quite where your fingers expect to find them (like the regulator on the new boiler) it's a bit more challenging, but she helpfully reminded me where the too-hot-to-touch bits were and soon the safety valve was hissing, and it was train time. 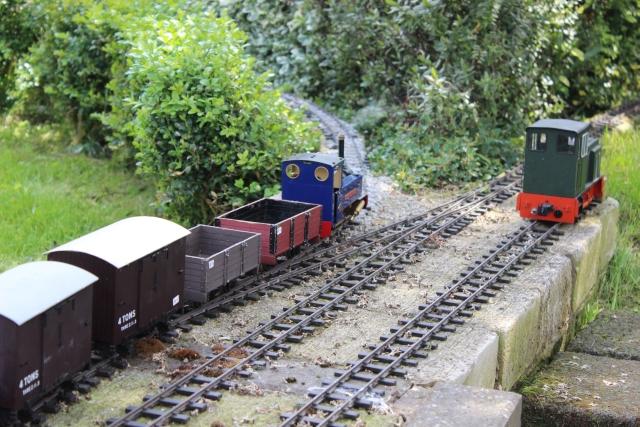 This is a historic moment for the LRJA, because the last time this loco ran I hadn't built this railway and didn't even live in this house, so this is No1's first journey on the Horncastle branch. A picked out a short train, but still longer than typical mamod fare given that I mostly use heavy wooden brandbright wagons with all steel running gear. I needn't have worried, as she strolled away with it under perfect control. 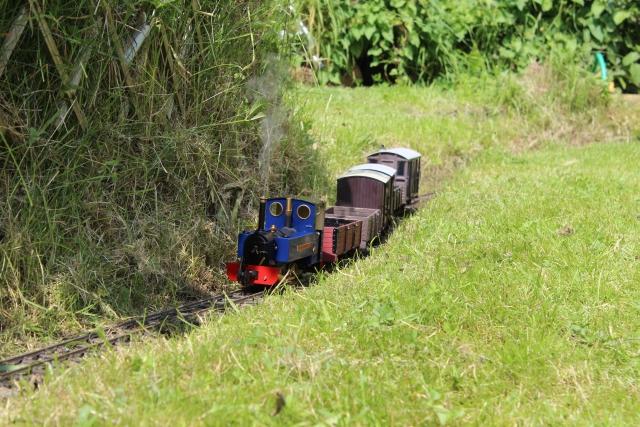 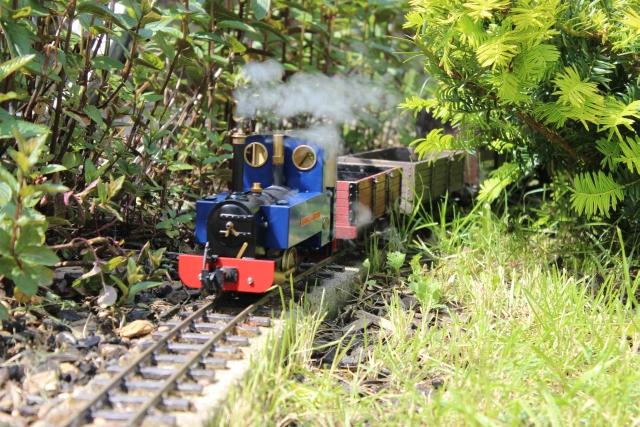 After several topups and a nice long run the line was starting to get busy as guests lit up (Dan had come for one of our regular steamups and brought back Andrew Raymond at the same time) so I shunted the train into the transfer sidings at Wragby, because it's always satisfying to complete a journey under power rather than running out of something on the main line, and took one more picture before blowing out the fire and resuming hosting duties. 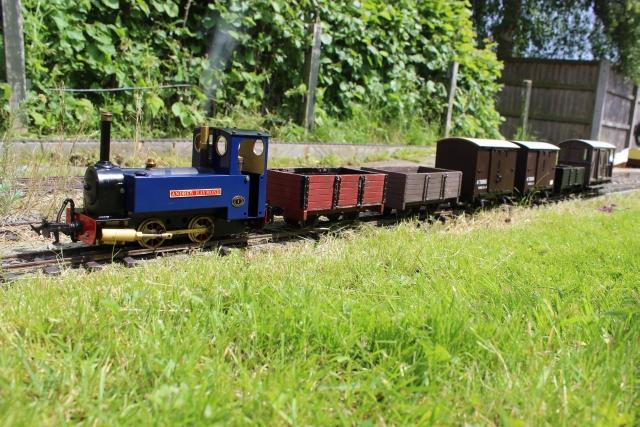 Conclusion: Dan's work has not met my expectations, but vastly exceeded them. Both in appearance and performance, the loco is transformed. I was expecting something temperamental to play with occasionally when feeling nostalgic, but instead got a loco thoroughly deserving of a slot on the regular running roster.
Well, now we know the buffer-stops work! (Heard at 2013 "Longest Day" solstice steamup)
Top

Never under estimate Dan's skills with mamods, anyone who has seen one fettled by him will testify how well they run!
"What the hell is that?"
"It's a model icebreaker sir."
"It's a bit big isn't it?"
"It's a full scale model sir....."
Top

laalratty:101730 wrote:Never under estimate Dan's skills with mamods, anyone who has seen one fettled by him will testify how well they run!

Hmmmmm, I'll have to remember that when I've got a little spare cash... My Mamod and IP Jane both need a little work but aren't a high priority at the moment because of the gradients that are going into my new line. They're of similar sentimental value to "Andrew Raymond" though - my Mamod was bought when I was 13 using the proceeds of a paper round...

Glad you've got your Mamod back TommyD, sounds like you had fun. And I've never thought about it but you're so right about not fizzling out at the end of a run...

Looks great Tommy.
I know all about sentimental attachments to Mamods.
My first one Prince is awaiting a turn in the workshop although I don't think much apart from the frames and the superstructure is original (bit like the real Prince I suppose.)
If at first you don't succeed, use a bigger hammer!
Top

Chimney - Mike Chaney or one of the 16mm NGM ones?

Wheels are from the sadly-defunct Salem. Not sure about the chimney though- could be Salem or Chaney but it was a looong time ago,
Well, now we know the buffer-stops work! (Heard at 2013 "Longest Day" solstice steamup)
Top

Excellent article, thanks for that writeup TommyDodd - always good to see a long unused engine resurrected and transformed into a well-worthy steed 8)

Chimney's a Salem. I had a loco ['Second Chance'] which when bought came with a full user history.
Top

Users browsing this forum: No registered users and 7 guests