A very popular starting point for Live Steam. With their low cost comes a number of problems which can be discussed here
Post Reply
6 posts • Page 1 of 1

With such a varied collection of new & 2nd hand locomotives I've always been conscious of the variation in safety valves available and fitted, particularly as none of the Mamod/MSS locos come with a pressure gauge, except the Mamod Brunel.

I do not have the workshop equipment or skills to produce a suitable pressure testing rig, so as I had just got my Brunel out of storage to find if it will be suitable for upgrading to the Mark II version with the revised gearing, etc., I decided I'd use this loco's boiler & pressure gauge for a comparison of the safety valves used in my running fleet. 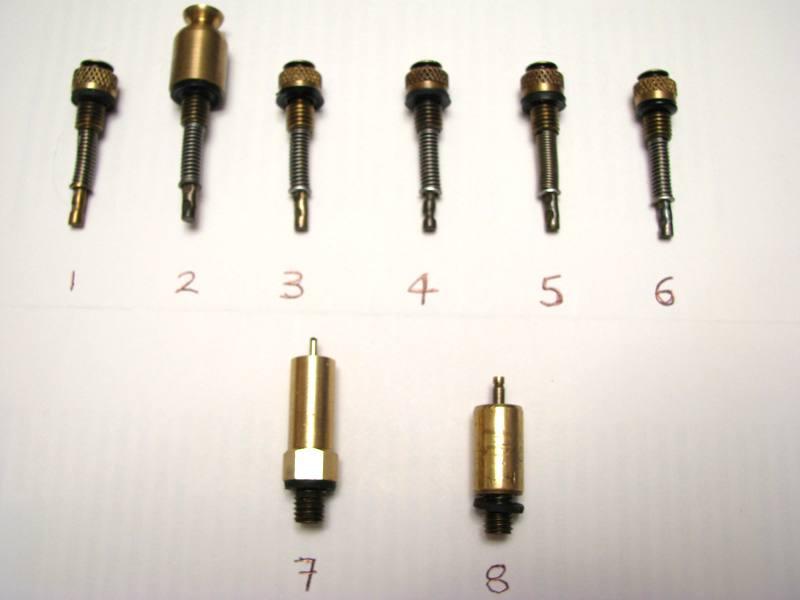 The standard Mamod/MSS safety valve tends to start weeping prior to reaching its maximum pressure.

1. MSS Safety Valve fitted to my kit loco. These locos are designed to operate at 0.7 Bar (approx 10 PSI) so this one operated cleanly at just under 15 PSI.

2. The Mamod Train (later re-named as the Mark I) safety valve fitted with a Steam4Fun cover. This loco was sold with a release pressure of 40 PSI so it was disappointing to see it only released between 20 & 22 PSI. As it has the cover fitted which reduces how much water just dribbles out of the safety valve affecting the burner I've been using it in most of my locos. I'll need to review this use now when I need the higher pressure.

3. Mamod Mark II safety valve. These are also sold as releasing at 40 PSI, so this one started to weep at 32 PSI but was fully open by 38 PSI.

4. Mamod William safety valve. These were supplied with safety valves that released at 15 PSI but Mamod did introduce a 25 PSI safety valve during its production. My valve releases cleanly at 32 PSI.

5. Mamod William II safety valve. Again these were supposed to be supplied with safety valves that released at 15 PSI. My valve starts to weep at 18 PSI and is fully open at 26 PSI.

6. Mamod Brunel safety valve. These are supplied to release at 40 PSI. Mine starts to weep at 39 PSI and is fully open at 40 PSI thus holding the pressure at 39 PSI. So my best performing standard safety valve.

7. PPS adjustable safety valve. Fitted to my 45 mm modified SL1 purchased at the Peterborough show. I was aware this one was set too low so now adjusted to release at 25 PSI.

8. Unknown maker adjustable safety valve. This one came on a modified SL1K but has always been difficult to use as the round body makes it hard to do up finger tight leading to it either leaking from around the fibre washer, or using a pair of pliers to nip it up means it is usually very tight after cooling down. Had difficulty setting it to a steady pressure so now releases at 30 PSI.

Pretty sure number 8 belongs to a Merlin, is it a loose fit when screwed in ?
Dan,

There is not really much difference fitting No.8 to the others Dan, although it does need a replacement fibre washer fitted. I do not have a die or thread gauges but my analogue dial calliper shows the outer diameter of the threaded portion to be the same.

They are Metric threads but the 6mm is very similar to the 1/4 BSF mamod use. If you look for the safety valve fitted to a Little wonder you should see the similarities.
Dan,

Just been reading through the Archive which I downloaded to accompany the 16mm SMT DVD I bought at Peterborough. This includes Merlin's 2nd edition catalogue from 1984, although the only safety valve listed there is LA14 Safety Valve, M5 thread. Unfortunately there is no clear photo of it, but I see the similarity with the top of the valve's operating shaft in the diagrams.

I think Tom did make an up rated SV for mamods when he produced his gas burner kit. Will have a look in my spares box when I get chance as I'm sure that's what my SL2 had.
Top
Post Reply
6 posts • Page 1 of 1