Time to build a railway...but where?

Timber which is pressure treated has a long lifespan in wet conditions. This particular timber is designed for use in gardens as edging for paths, bases underneath fence panels etc...
I have some already in my garden which has been there for nearly 10 years with no sign of detioration.
Additional protection can be brushed on, eg. fence paint, which also gives a coloured finish.
Top

Big Al:82874 wrote:Looking good Peter, Can't wait to see how it turns out.

I agree! It's a very exciting project, thanks for the progress reports...

Just have to agree

:D It´s a beutiful project, I´m following and learning!!
What kind of "landscape materials" are you going to use on the board deck on the outside area?
Top

Hi Guys, many thanks for your interest and replies... As this is my first garden rail project I am also learning as I go. The firm base is essential as so many railways I have seen tend to move with changing ground conditions and have to be relaid.
The next major consideration I have learned from other Forum users is not to have tight curves, and as I have unlimited space I intend to make them as big as possible.
Now, the question of landscape materials.... This is very important to me, I want it to look as realistic as I can with the obvious constraints!
I want to put a station platform on the boards and would like to use 'real' slate or stone edging and possibly crushed stone surface. If anyone can offer advice on constructing this I would be delighted.
Question....... Should I put roofing felt on top of the boards and under the track first or would that make it more difficult to stick down the platform material?
Other scenic items will be natural stone/rock, tiny conifers and slate chippings for a quarry area.
Any other ideas greatly appreciated.
Top

Slightly off the main subject, but connected to it..... I have had to make a move of my modelling table and all associated storage shelves etc. from the comfort of my kitchen/diner into the layout shed. This is not a problem as far as location goes as I can be next to the railway for tests and trials etc. However, I did have a nice set-up for all of my bits and pieces and needed to make a new storage unit to cater for them.
The answer came from an unusual source.....a redundant computer desk. This unit was missing its pull-out keyboard shelf but had all of its castors and was otherwise undamaged.
A few pieces of conti-board and several storage units later it now looks like this... 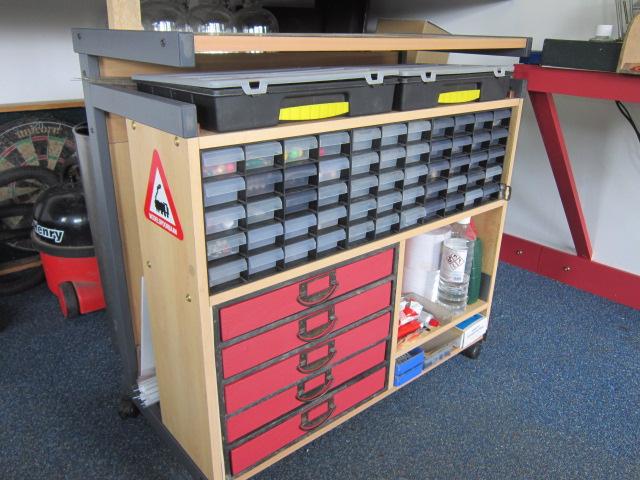 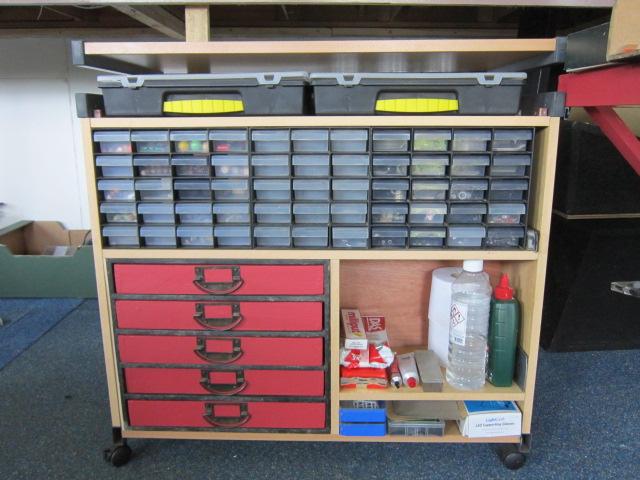 All of my spares and accessories are housed in this mobile unit. Plasticard sheet and metal rods etc are at the rear, paints and adhesives at the front. I have everything in reach without even leaving my chair.
Even room for a bottle of red on the top!
This is placed next to my modelling table, also a refugee from the kitchen...
[url=./myff/1558872/IMG_1048.JPG] 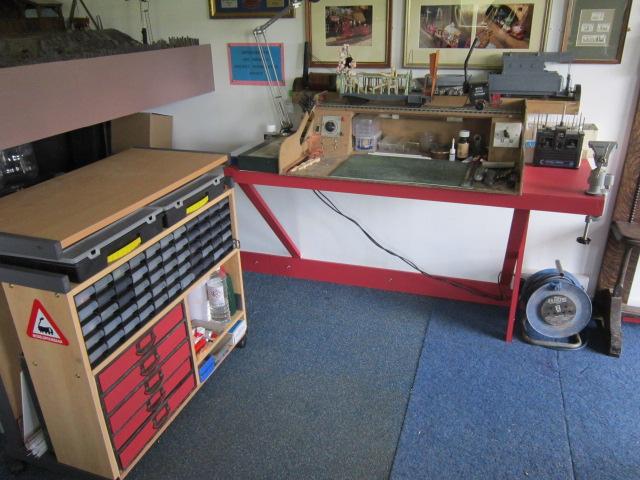 Allen, I like the idea of a beer fridge!
My caravan is parked very close by and, if needed, plenty of beer can be prepared for visitors.
I'm a red wine man myself and that doesn't neede a fridge.
Top

Little progress on the railway in this weather!
I don't mind working in the rain but the clay here is so slipperry it could be dangerous, so, I have turned my attention to the exit points where the tracks leave the shed. In previous photographs you can see a temporary board covering the openings. This was just to keep the rain out until I devised a permanent idea.
In the first picture below, the main structure has already been put in place. This is a 6inch frame pushing the opening away from the wall of the shed and keeping the scenery dry inside. Any damp would certainly destroy the plaster and other materials. 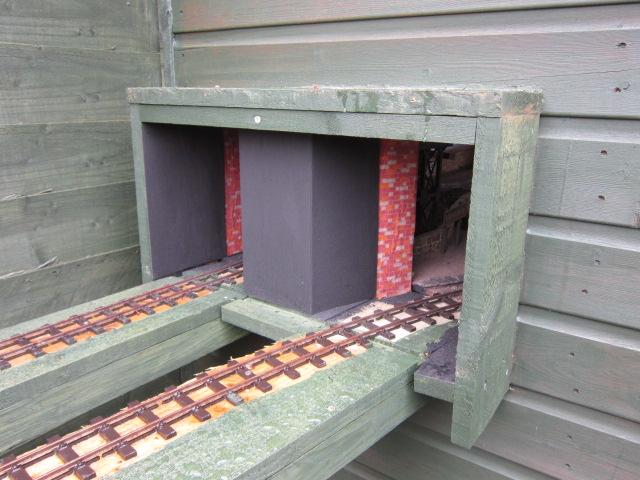 The groove, cut with my router, is to prevent any water from passing further than this point. 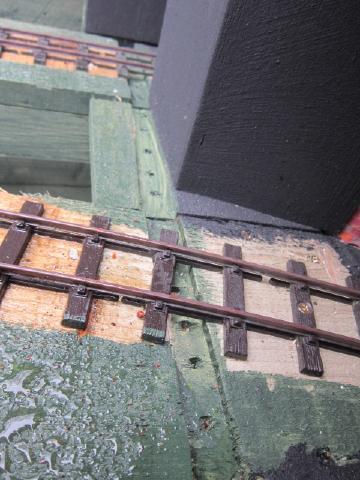 The new, permanent door, is made from a piece of sheet steel which I found in the 'useful one day' section of our storage shed.
It is hinged at the top with a piano hinge and brass screws. At the bottom is a strip of draught excluder which follows the contour of the track. 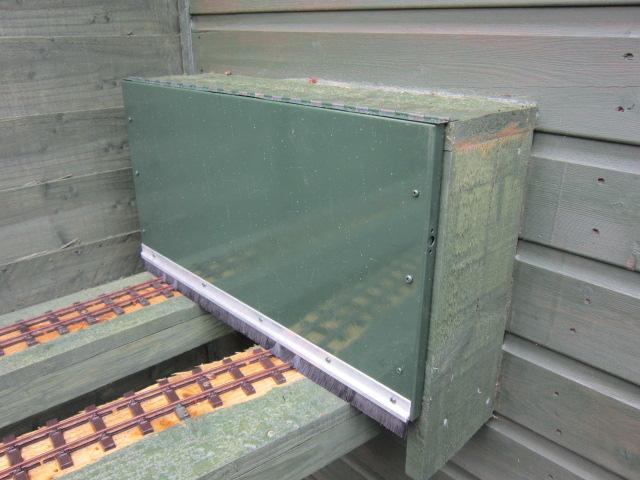 Door open..... Just have to make a clip to keep it from falling down on any stock passing below. 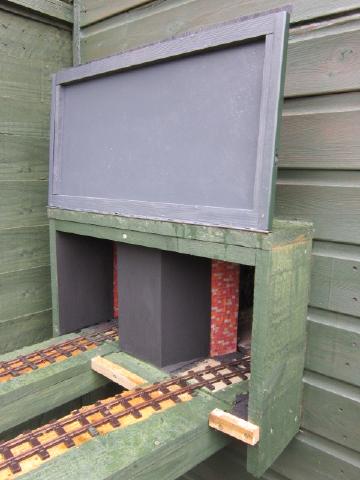 Very well thought through and executed piece of civil engineering there!

Since the last picture of the decking there has been more construction work and the whole area covered with under-slate roof felt. I have done this because the timber used, although weather resistant, is likely to expand and contract in the changing conditions. Gaps would certainly appear between the boards and the ground cover material, whatever I eventually use, would separate in straight lines.
The photograph shows the track fixed in place so far. This represents the outside station area, Brockhampton, of the Brockhampton and Umbridge Railway Preservation Society, (BURPS).
The far left line is the continuous loop with two points taking track away from the return to Umbridge (inside), one giving a reversing triangle for locos running round trains at Umbridge Station.
The tracks on the right are 'steam-up' lines for visiting locos (as I don't have one, yet!). In the meantime they are sidings for stock waiting its turn.
It's difficult to imagine, that in this photograph, three boxes of Peco track have been used. I never realised how much thought went into designing a useable track plan. Even now there must be people out there who are thinking...' I wouldn't have done that'... but I have tried to think of all operational alternatives to make use of the space.
Be gentle with me, I have never built a garden railway before! 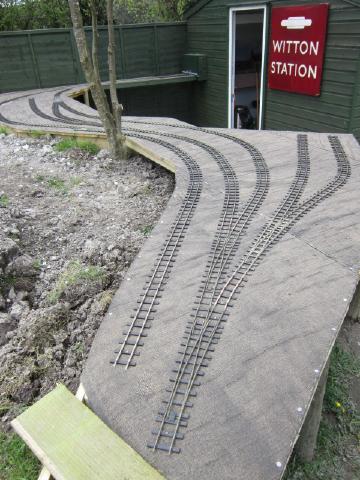 I think it looks cracking, you haven't tried to cram a lot of track into the space available. And you've got the nice flowing curves as well.

Users browsing this forum: No registered users and 8 guests