ge_rik wrote: ↑
Sun Mar 29, 2020 10:50 pm
There's a link to two downloadable .pdf documents on the site. One is all about concrete rock making and the other, by coincidence, is about trestles.....
http://tjstrains.com/request-pdfs/

Rik
Your timing is impeccable only this morning I bought a bag of acrylic render to try on the area if I can do half as good a job as those pictures I will very happy.
Top

I have reached a point where I can call Stage1 complete.
The track has been laid and the line across the high trestle (my biggest worry) has been tested, my largest locos and a train have been run across it, both forward and backwards with no problems at all. 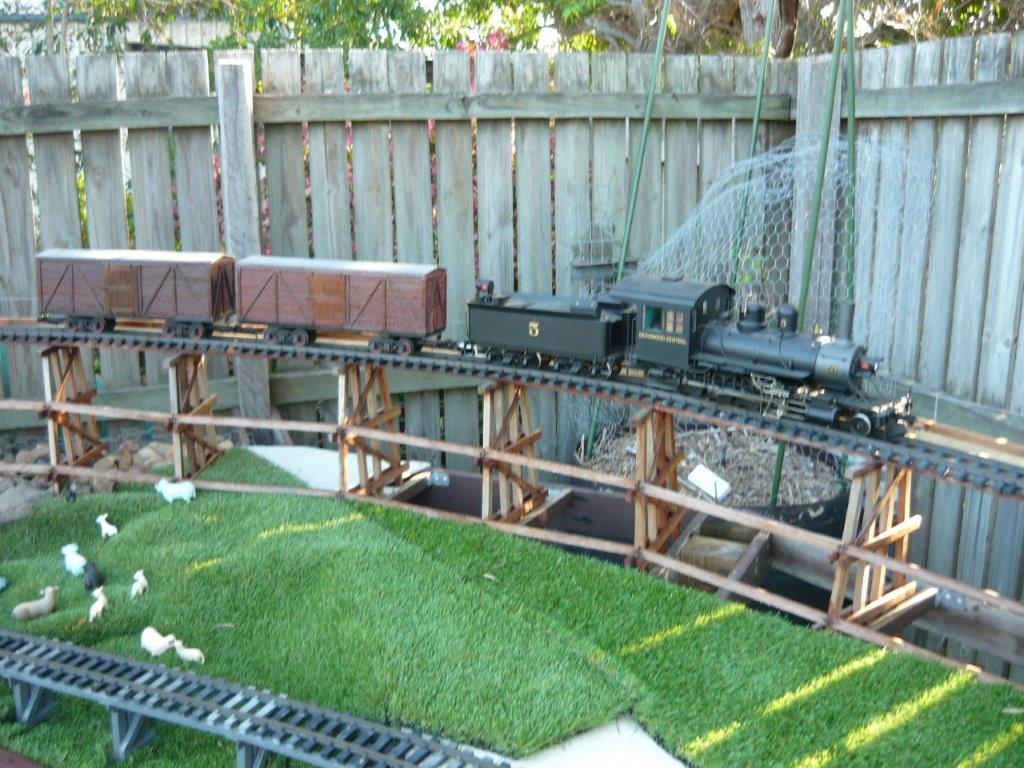 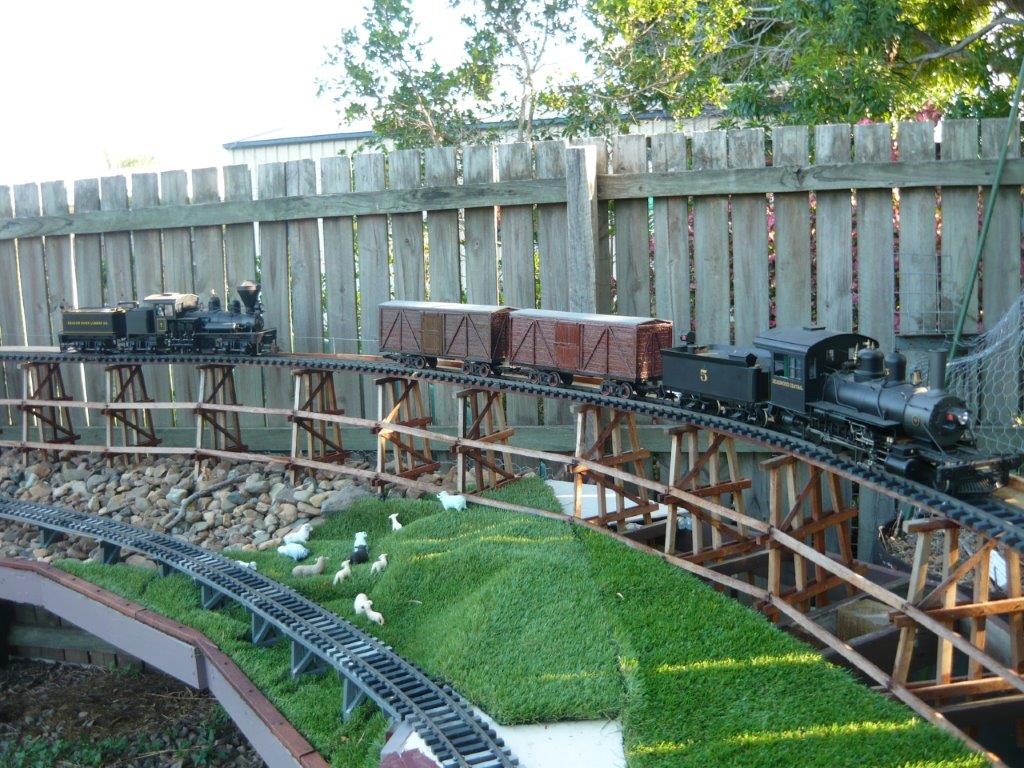 The low trestle has been tested as well and no issues presented themselves, looks like my pedantic attention to both trestle constructions has paid off. 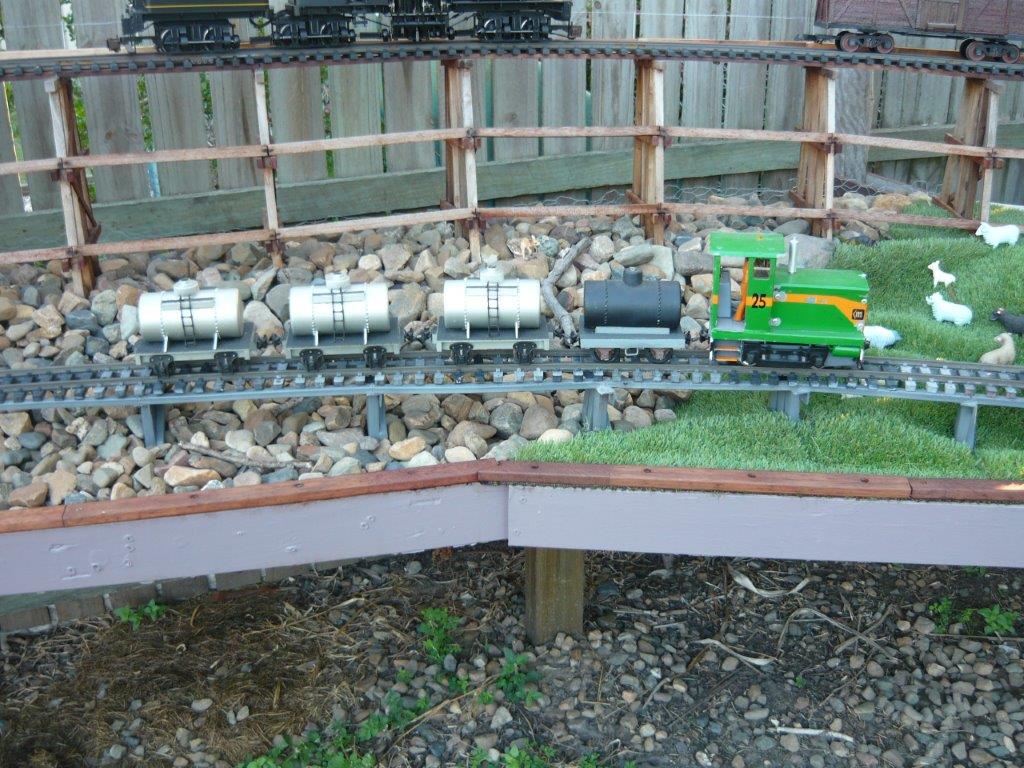 Meanwhile a drama has unfolded between the trestles. 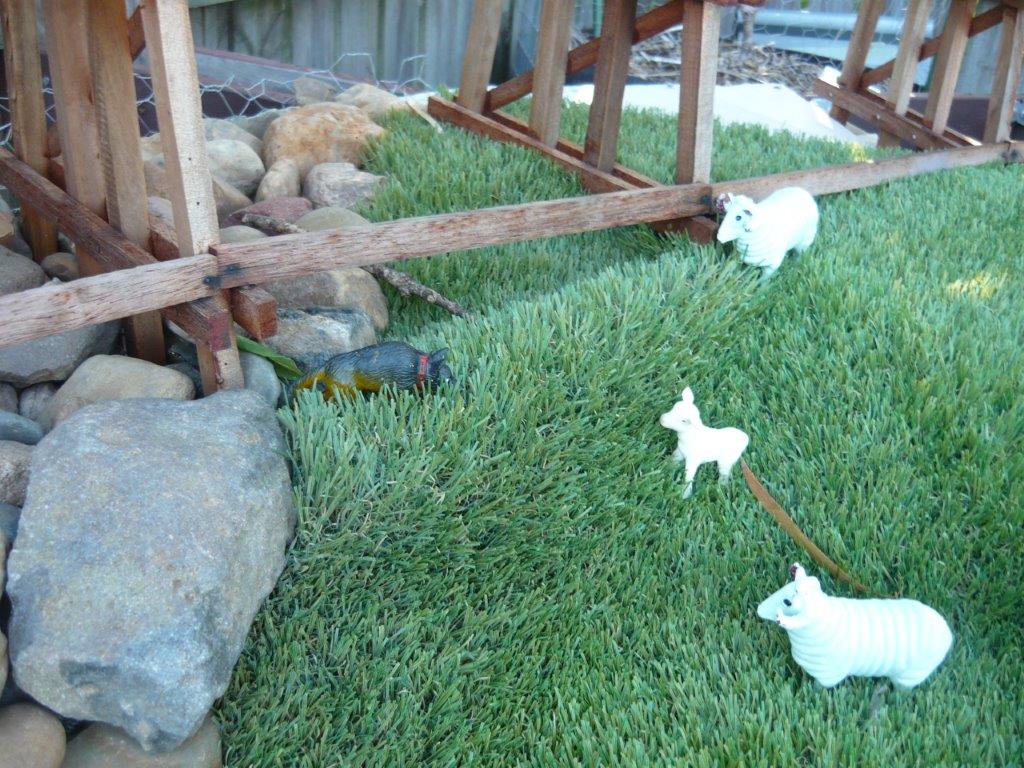 Skippy looks on at the unfolding drama. 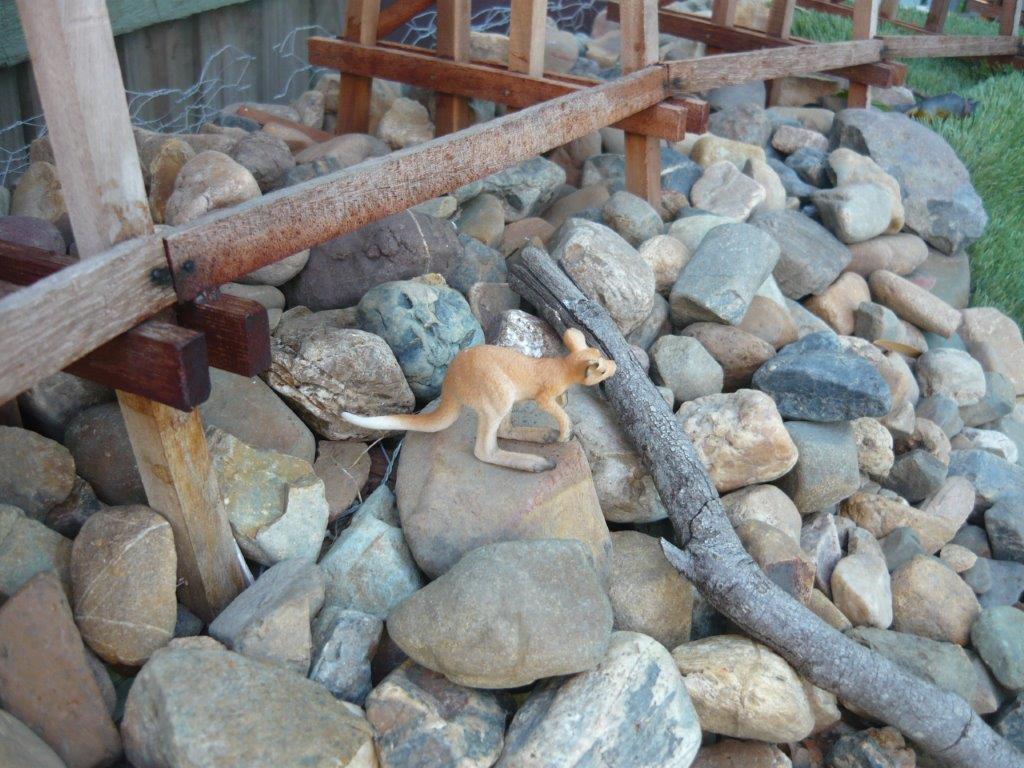 Blog will be updated in due course.
Top

That's shaping up very nicely, and at an impressive pace too, well done! The two trestles look great, especially once they've got a train on them...

I have now updated my Blog so it reflects the work from the start to the completion of Stage 1
https://ringbalin-light-railway.blogspo ... -page.html

Edit;
I used my lock down time to re organise the presentation a bit better by grouping the older posts under 2 new tabs of G and HO Construction Logs which consist of sub headings of Stage1,2 etc plus a brief explanation of where the construction is headed. This will hopefully will make it more user friendly.
I intend to only have a maximum of 5 posts under the G and HO posts tabs so they will be the latest ones; a type of "What's new" feature.

Please have a look and comment if you wish.
Top

Stage 2 has begun it involves bringing the 2 tracks around a series of curves to run across the yard into the "town area.
As there are no fence posts to attach to I have had to cut my own and concrete them in, they are made of galvanized "C" purlin (used to build sheds etc).
I have also used a piece of lattice screening that was on my back deck before it was renovated, it provides a finished edge to the railway when it is viewed from the house. As my wife likes Coleus plants and the lattice provides a shady spot that is what will be planted there thus giving area the name of 'Coleus Corner'.
Pictures of progress so far. 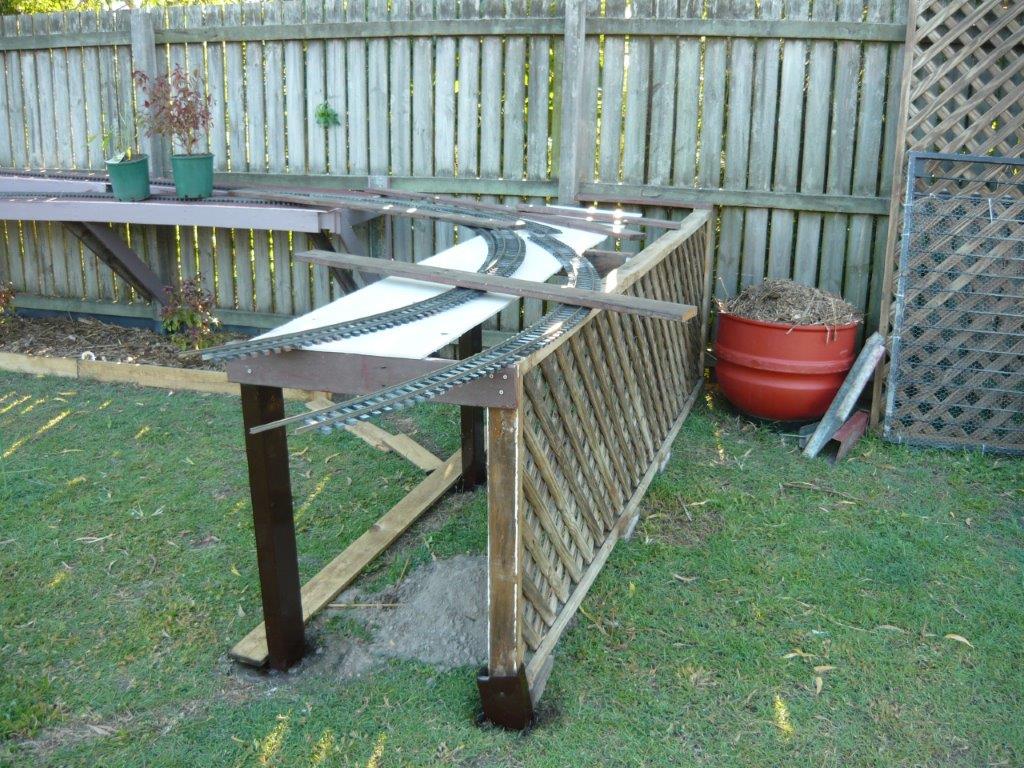 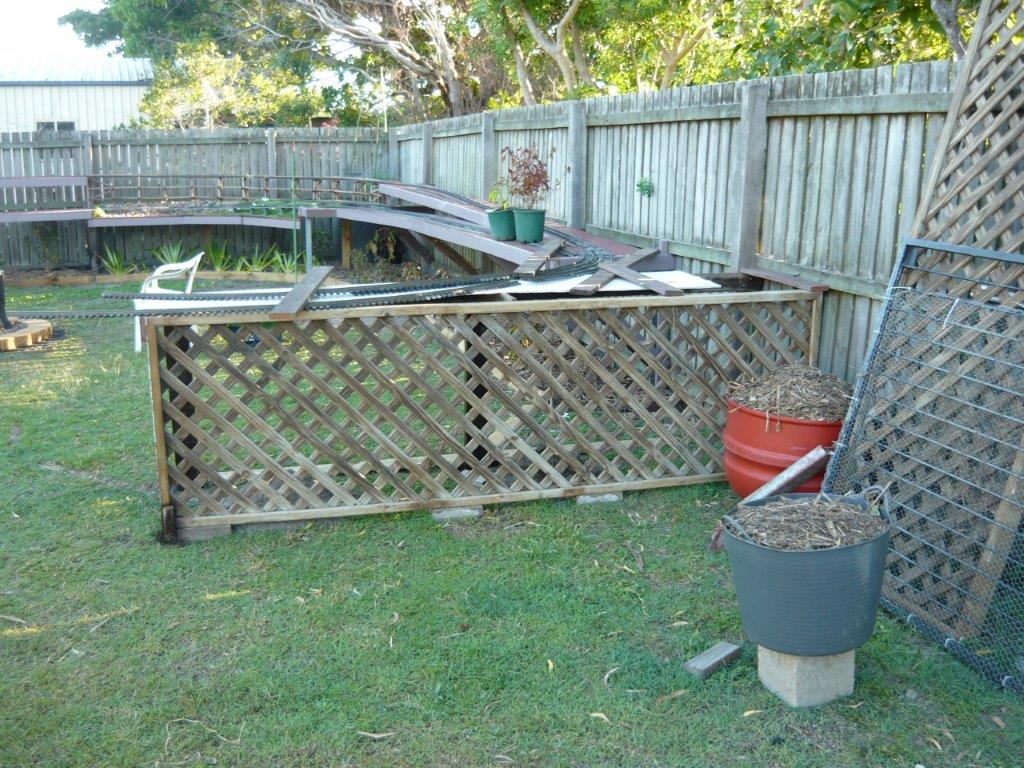 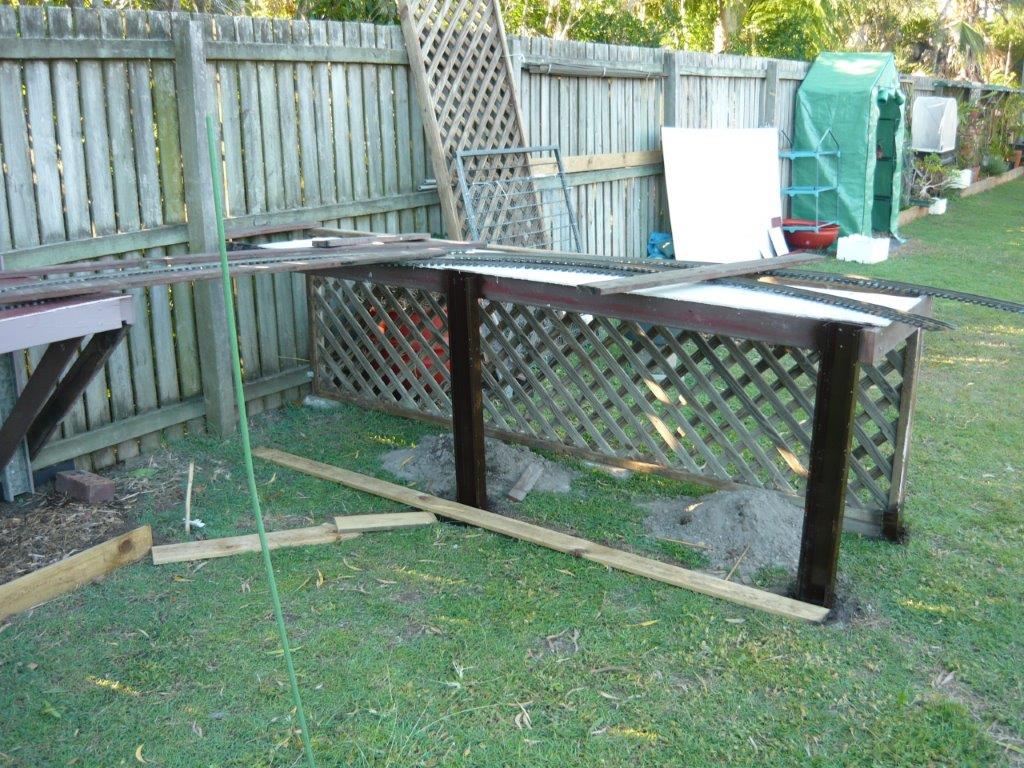 Access to inside the loop will be via a lift up bridge hinged at one end.

In the centre of the layout design of a garden area has begun.
SWMBO wanted a firepit but we could not decide where to put one then I had a flash of brilliance and suggested we put it inside the railway that way we could sit by the fire in winter and watch a train or 2 trundle around.
Now this project has snowballed to me laying "Cracker Dust" (made of crushed rock which when mixed with cement acts like concrete) paths following the track and planting out and mulching the area so I do not have to mow grass inside the loop.
Picture shows the firepit in place, there will be another circle constructed and filled with "Cracker Dust", this thing could end up bigger than Stonehenge. 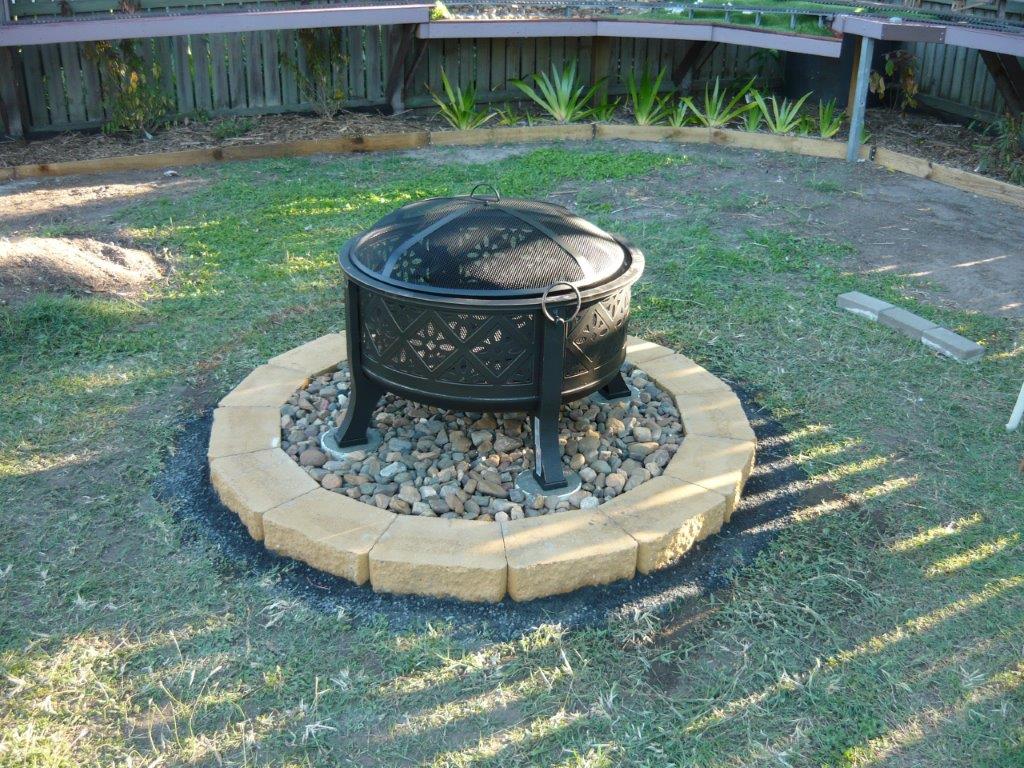 Hi Graeme
I like the new layout of the blog.

Some of the photos seem to have disappeared though, especially under the latest posts tab 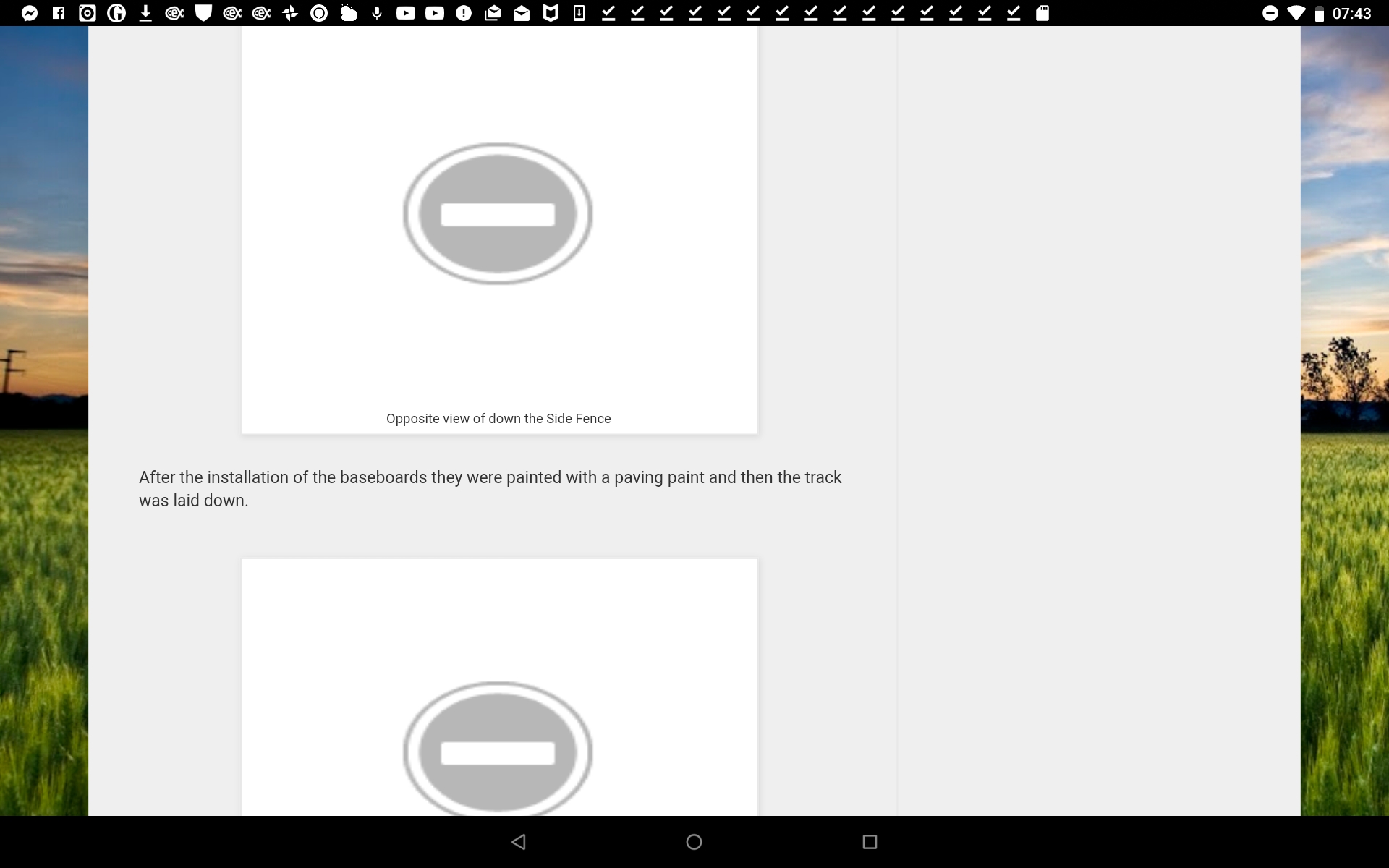 Hi Graeme
I like the new layout of the blog.

Thanks Rik, I separated the G and HO blogs (actually created a new one for the HO) as they were becoming to unwieldly.
I haven't looked at either for a while so I'll go back and try and see what happened.
Top

I have updated my blog by putting the missing pictures back on and a description of the start of Stage 2.

As I have two layouts a G and a HO I have created a second blog dedicated to my HO as I was finding that only one blog was becoming to cumbersome to manage.

Both seem to be fine now.
Both blogs looking good. I think the structure now works well. Your construction logs are a bit like my progress reports.

Glad you manage to find time for your H0 layout. I can't remember the last time I did anything on my indoor 00 railway....

I like the firepit. I have a one that I use on my patio and it is very relaxing watching the flames lick the firewood on a summers evening.
YouTube Channel
Top

tom_tom_go wrote: ↑
Mon May 04, 2020 10:35 am
I like the firepit. I have a one that I use on my patio and it is very relaxing watching the flames lick the firewood on a summers evening.

The firepit and it surrounding landscaping when finished will be bigger than Stonehenge if SWMBO has her way.
Top

ge_rik wrote: ↑
Mon May 04, 2020 8:21 am
Both seem to be fine now.
Both blogs looking good. I think the structure now works well. Your construction logs are a bit like my progress reports.

Glad you manage to find time for your H0 layout. I can't remember the last time I did anything on my indoor 00 railway....

I had to go through both blogs from top to bottom to correct not only the missing pictures but the owners mistakes with the links to the construction logs.
I put a link back to "construction Logs" at the bottom of each post so that people viewing can go straight back there without having to scroll back to the top to get to the tab.

The HO has had a bit of extra work done on it but I haven't done anything on the blog, been distracted with the G construction plus a couple of loco build projects.
Top

I have built the opening for the lift up bridge so that will be the next project under taken. 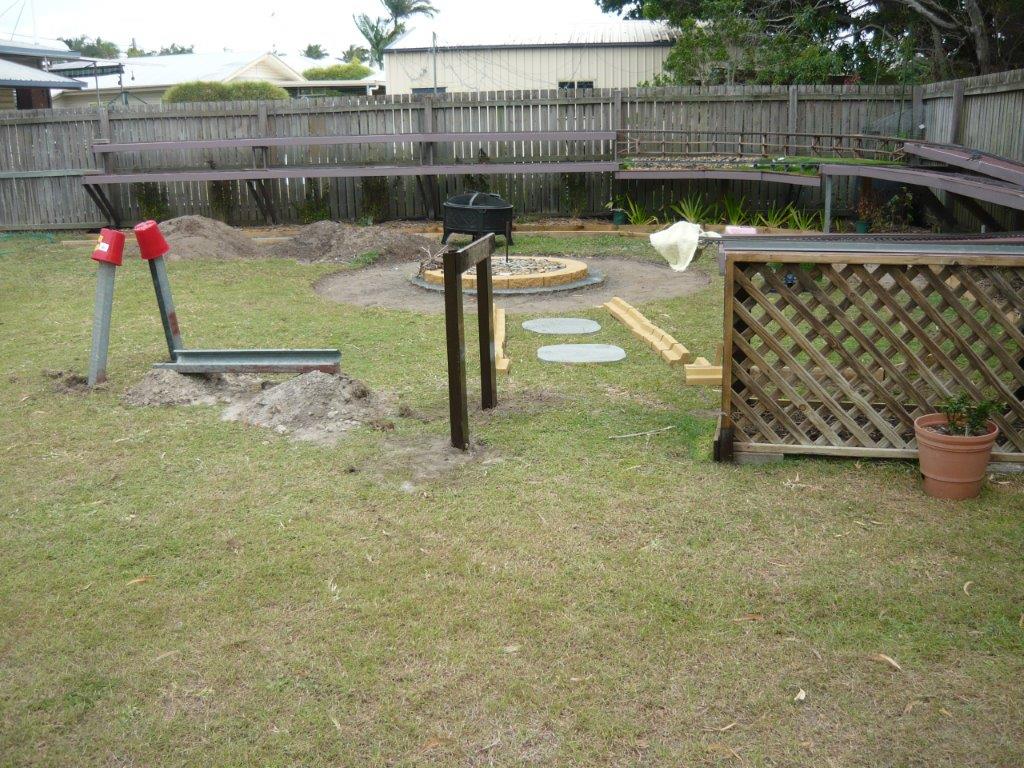 I also did a bit of landscaping around the railway and the firepit area.
I now have the edges of pathways that will follow the track boards so that I can follow a train right round the layout with out walking over garden beds.
I intend to landscape, with mulch and bushes, the whole inside loop area so as to eliminate mowing. 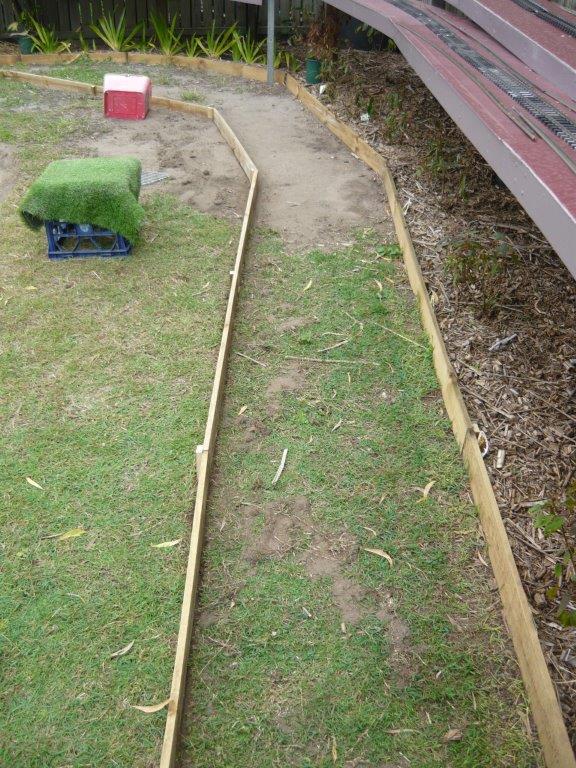 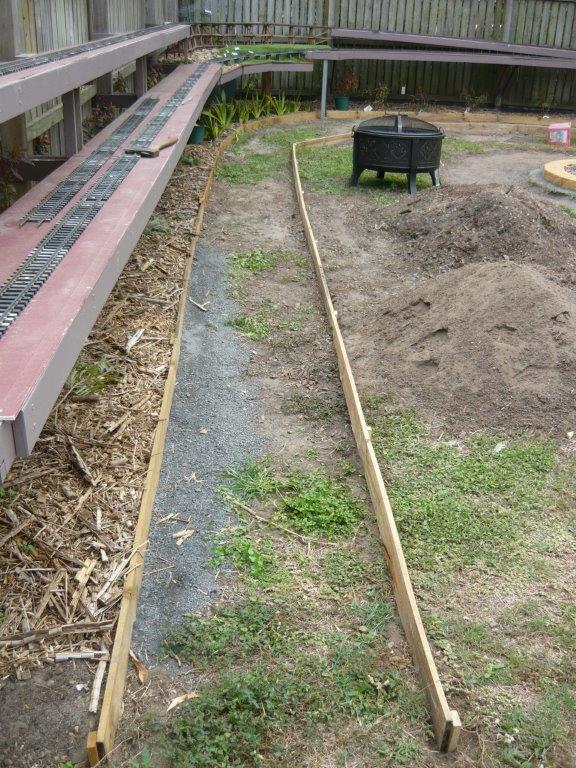 More pictures and a description are on my blog
https://ringbalin-light-railway.blogspo ... -page.html
Top

Some progress on the layout.
Half the lift up bridge is finished.
The opening end rails will be held in place by "Hillmans" lift out bridge clamps.
To keep the rail alignment at the opening end I soldered a brass plate under the rails which holds them at the correct gauge. (the melted sleeper will be replaced) 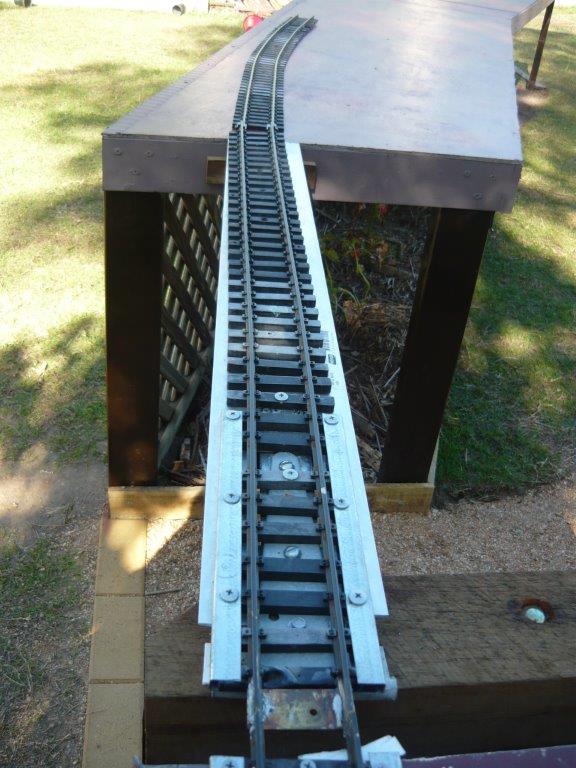 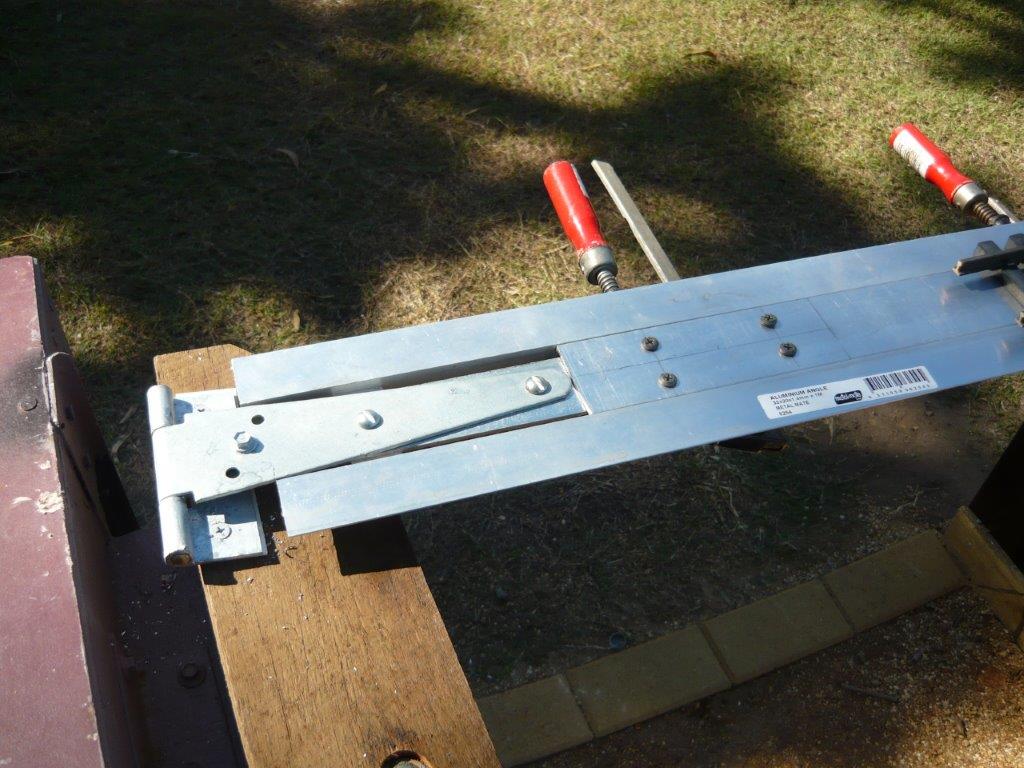 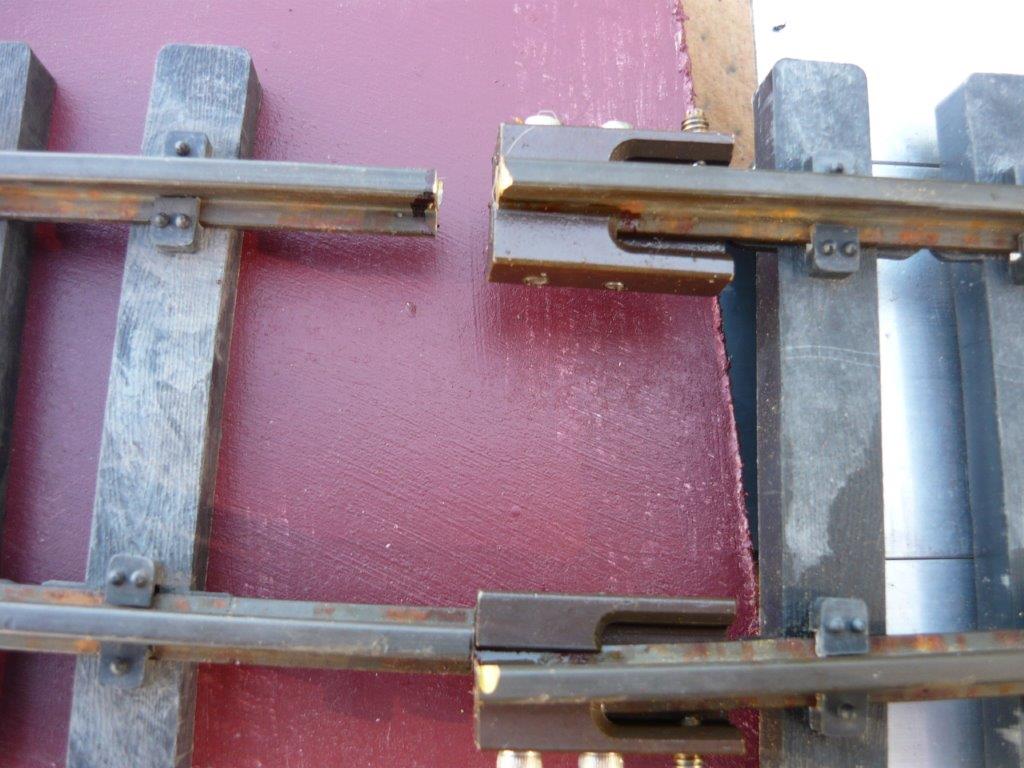 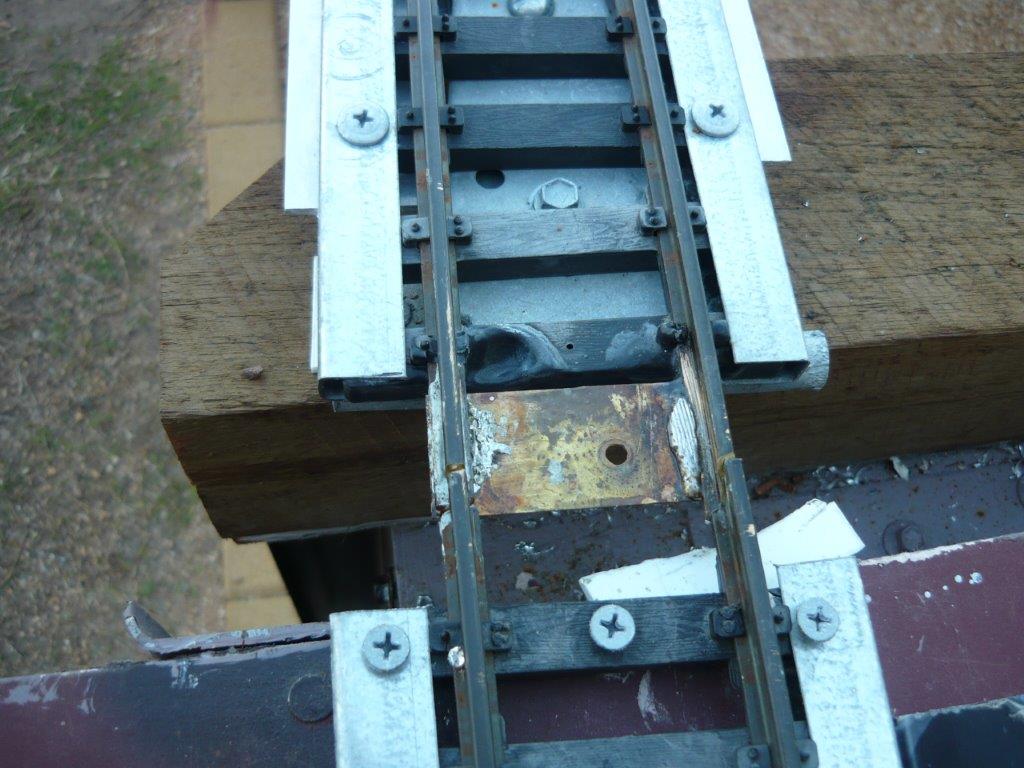 The baseboards across the yard have been installed, so Stage 2 is nearing completion. 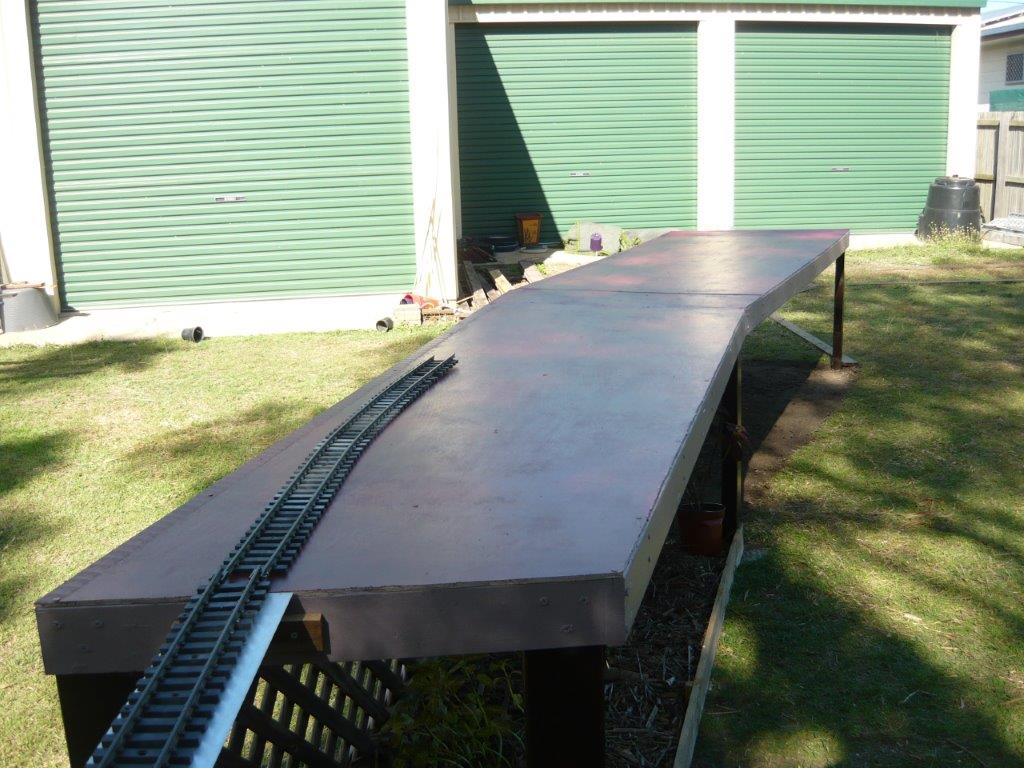 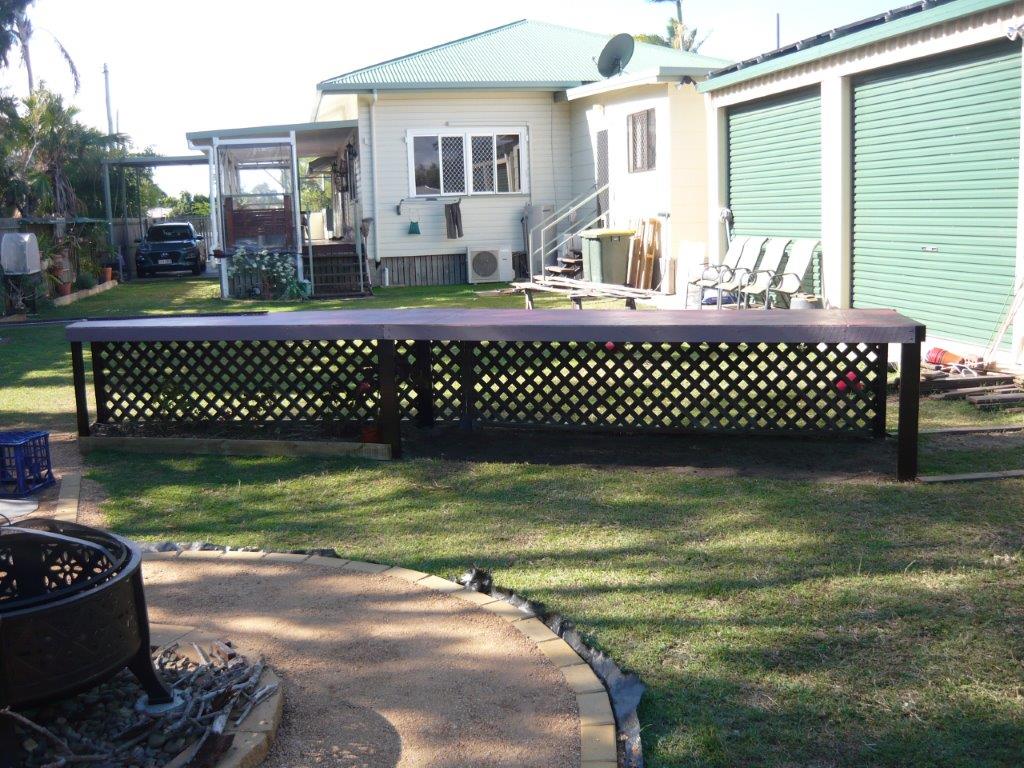 Blog has be updated with more pictures and description.

Been a busy morning the second bridge deck has now been completed just a bit of tweeking to do and then its on to building the joining beams so that they become one structure.
Finished just before rain washed out play for the day. 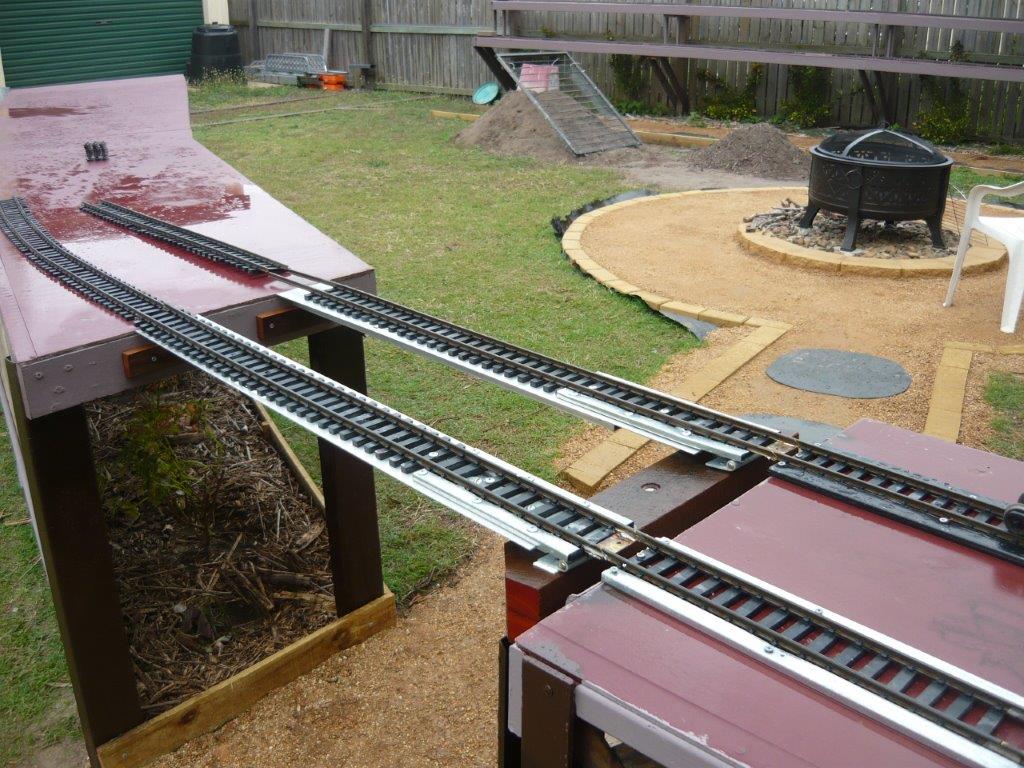 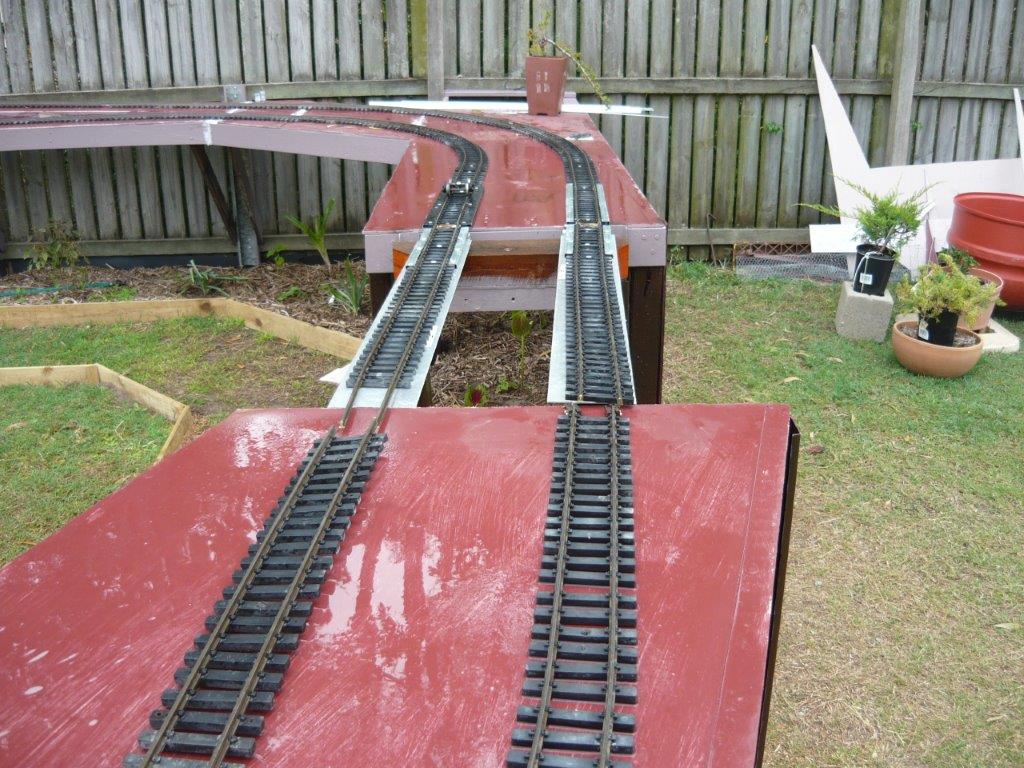 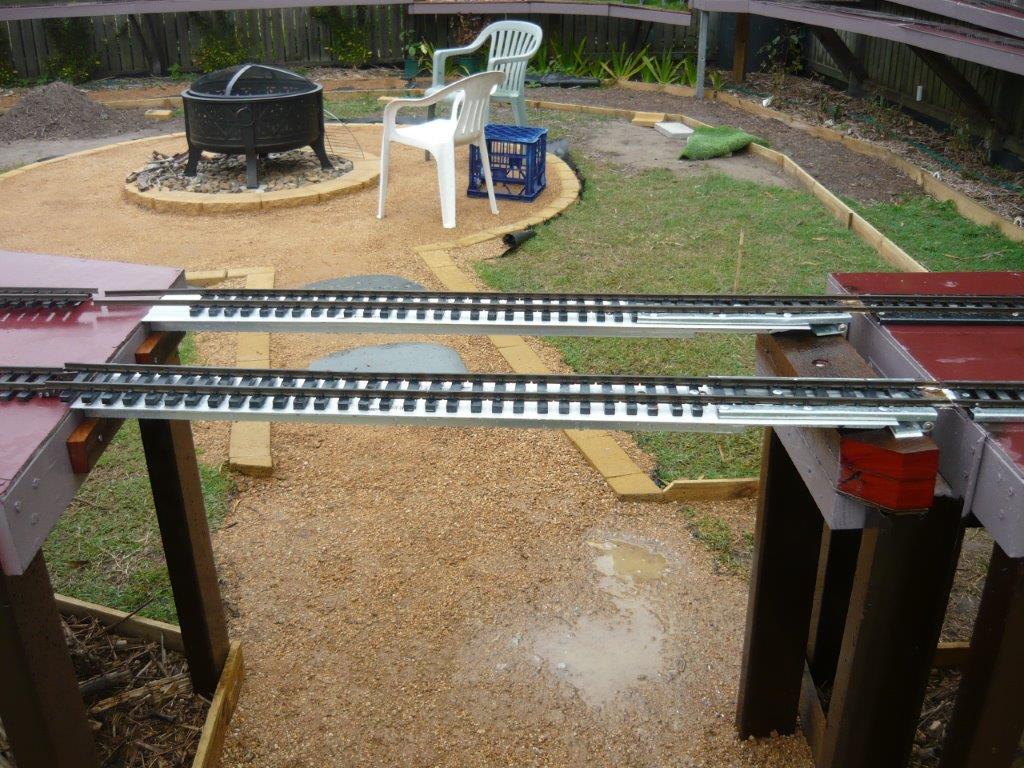 With the final completion of the bridge Stage 2 of the Layout will called as finished and work will start on Stage 3 which involves building a spiral to take the outer loop back up to its original level.