I have asked about starting a new thread on our Fairy Wood Light Railway line and I have been given the go ahead.

So where to start. The first thing I need to do is say thank you to Peter Butler, I got a very nice surprise off the postman this morning, well actually I had to go and get them from a not so local post office, but thats another story.

This is what I got, 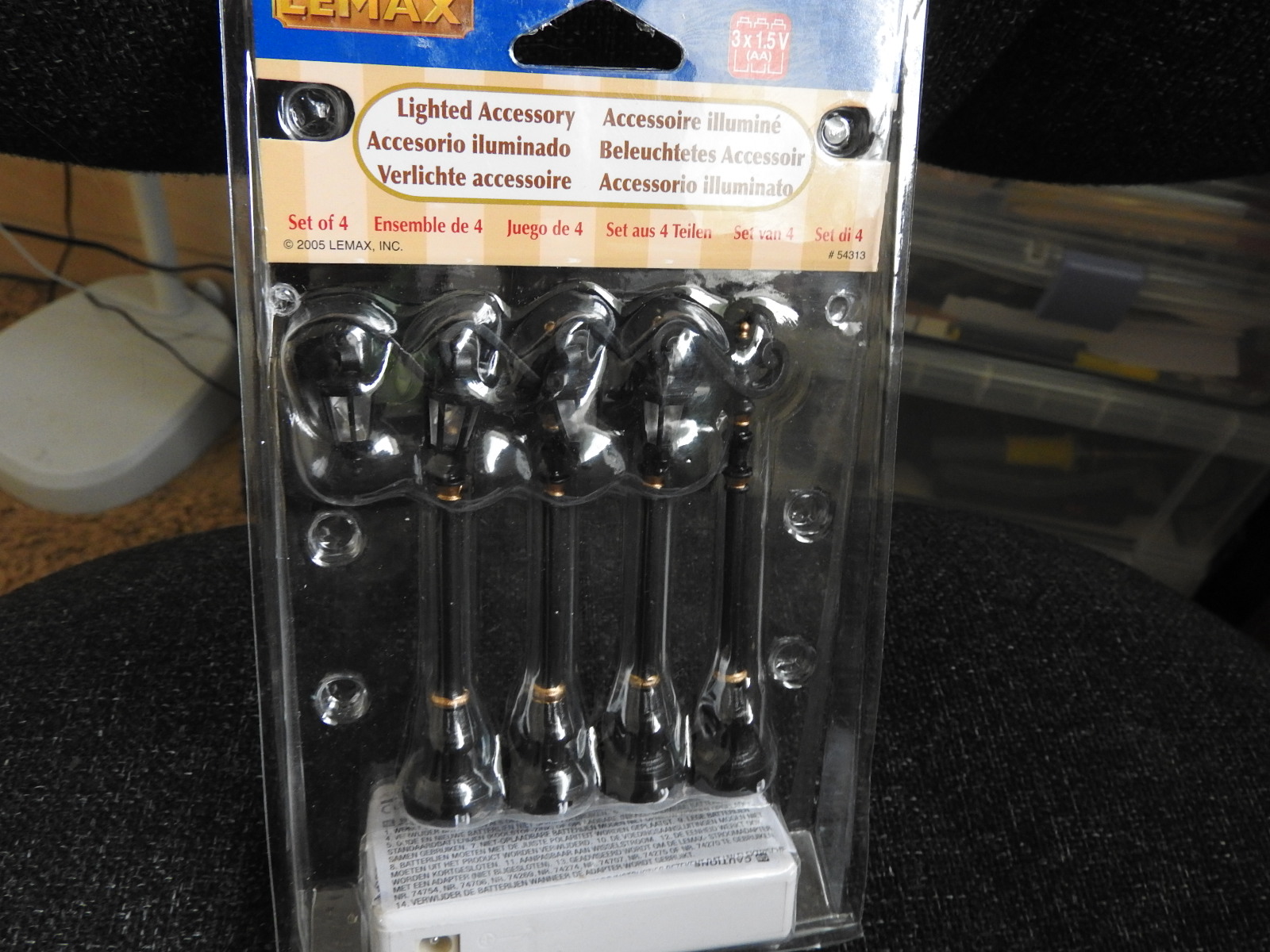 Back to the line. It’s been some time (4 months) since we had to move to our new address, and with some health problems and also some “Personal Issues” with so called friends, I won’t say or go into it here. We need to decide were the line was going to be placed, this was a fairly decision to make has Anne told me that under no circumstances was the line to go on all on the outside of the garden like our last address. Fair enough I thought, it was a bit of a pain to be honest getting the mower on the lawn and for anyone else for that matter.

So it was decided to go along the dog bone route, 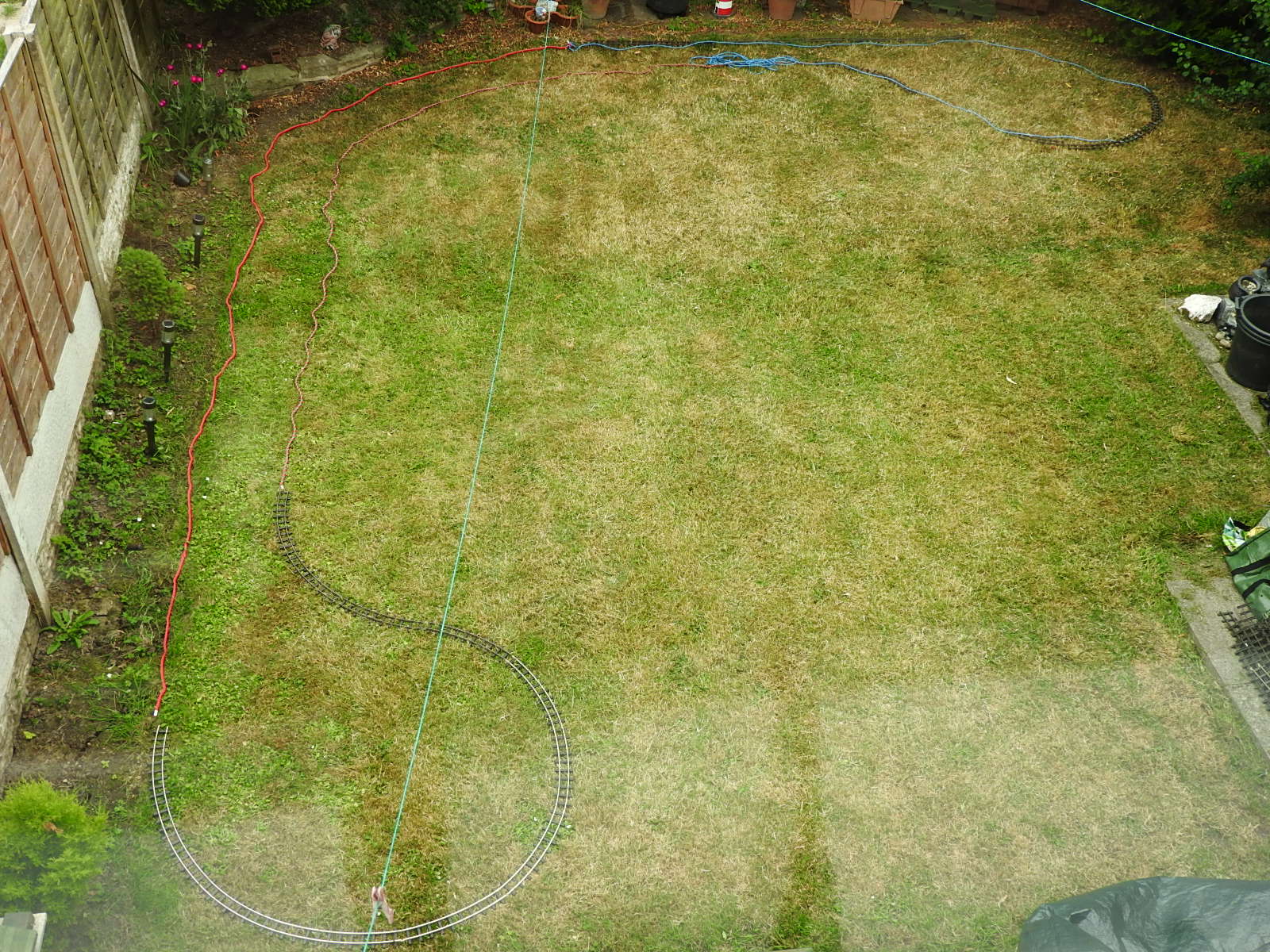 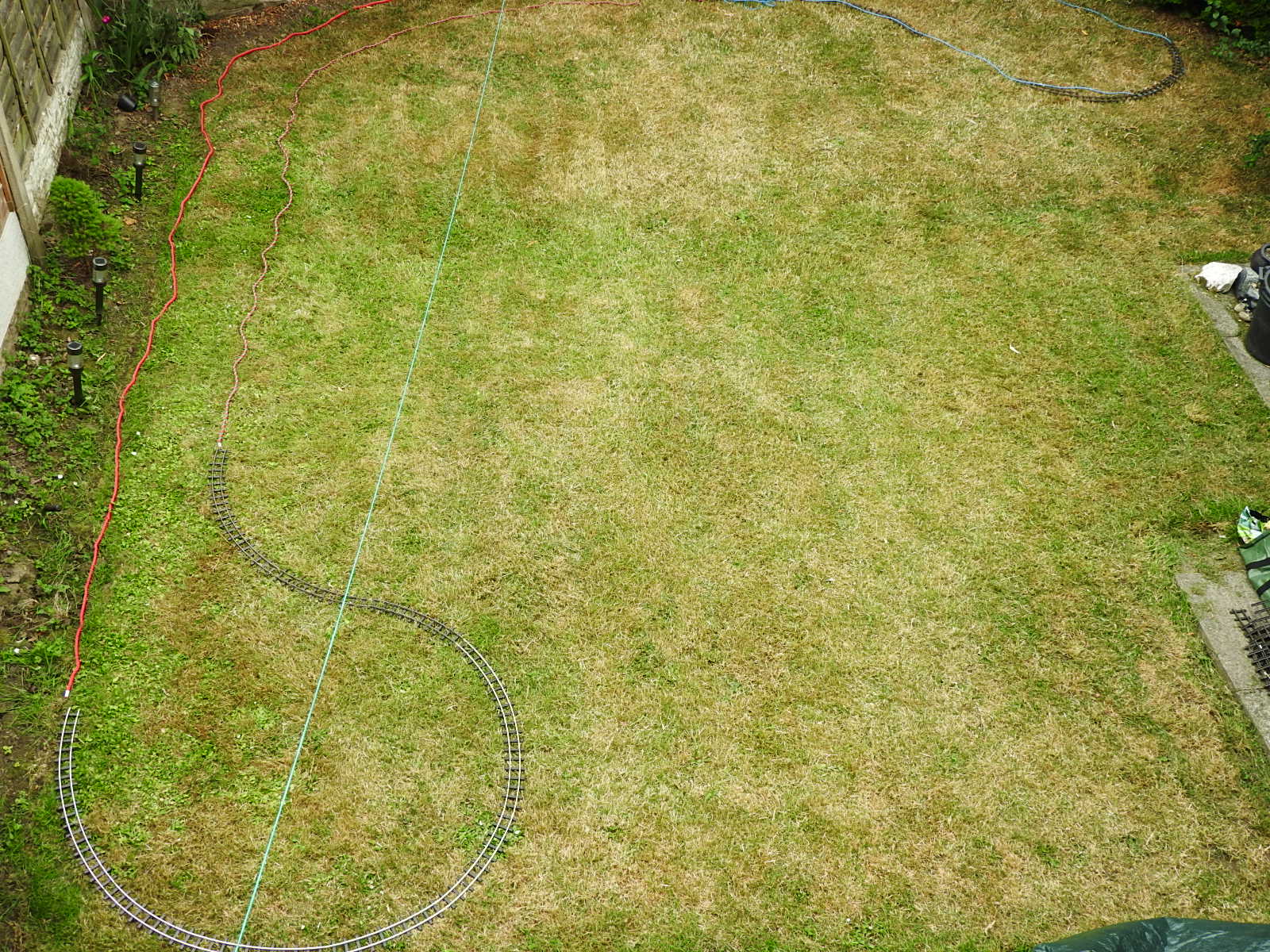 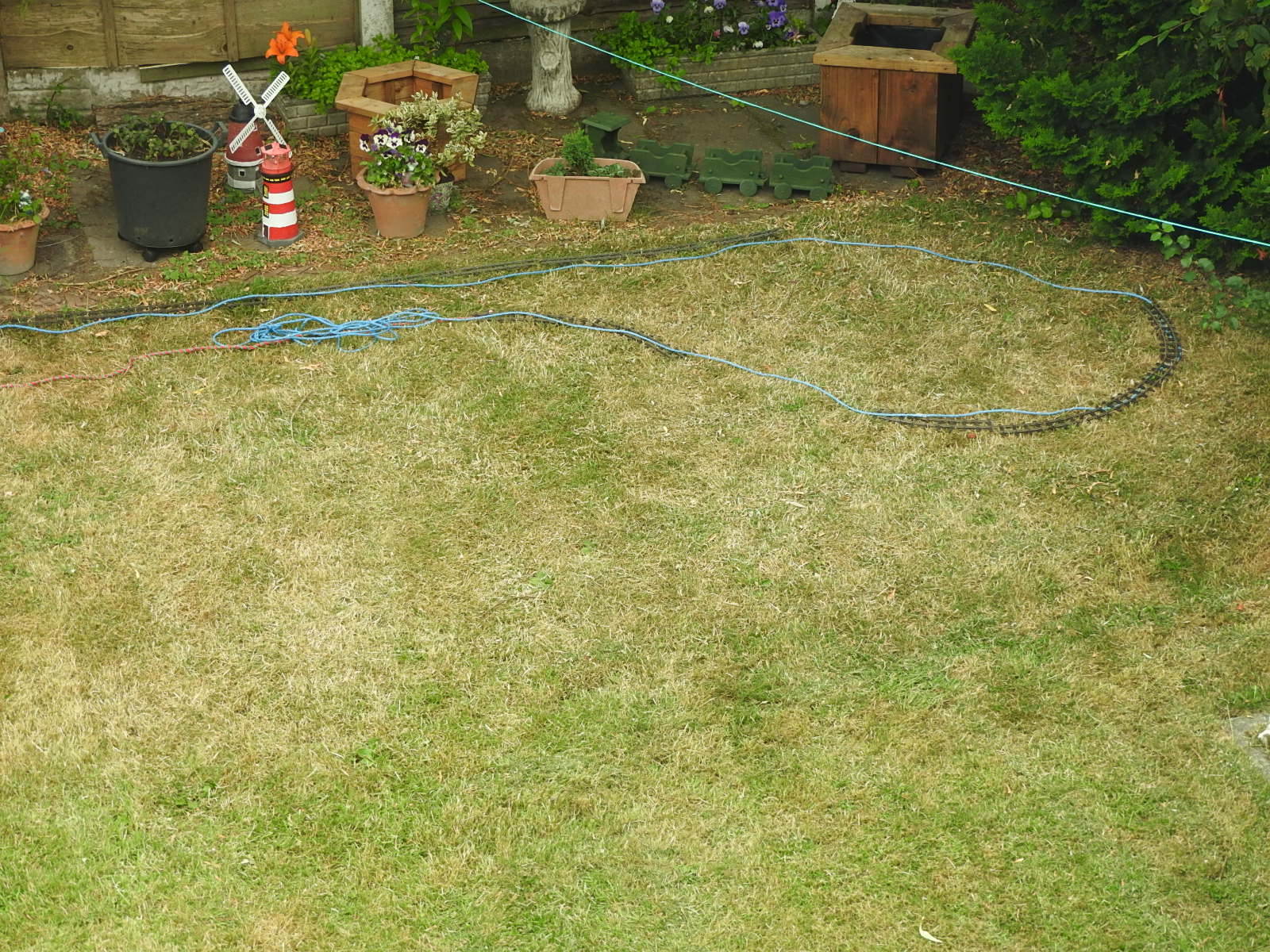 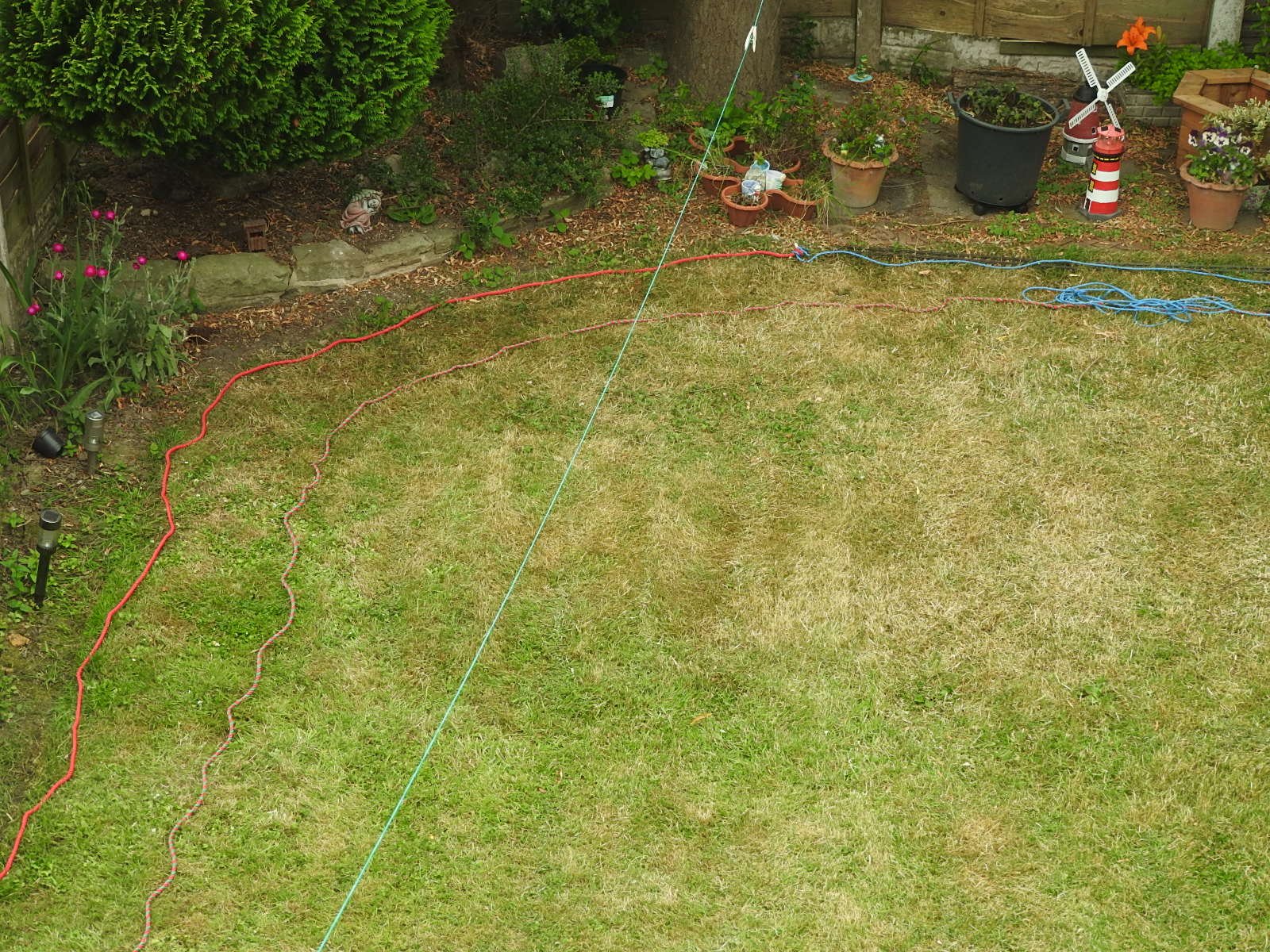 There was put to the CEO, that maybe we could extend the line along the border by the patio to the path near the garage, but she was having none of it. LoL.

Next came some track laying, I didn’t want to have a chest high track on stilts, and if you look at the top of the garden it is slightly higher by about 2 feet approximately. And that would have might by the time it got to the patio, it would have well above our head height…. 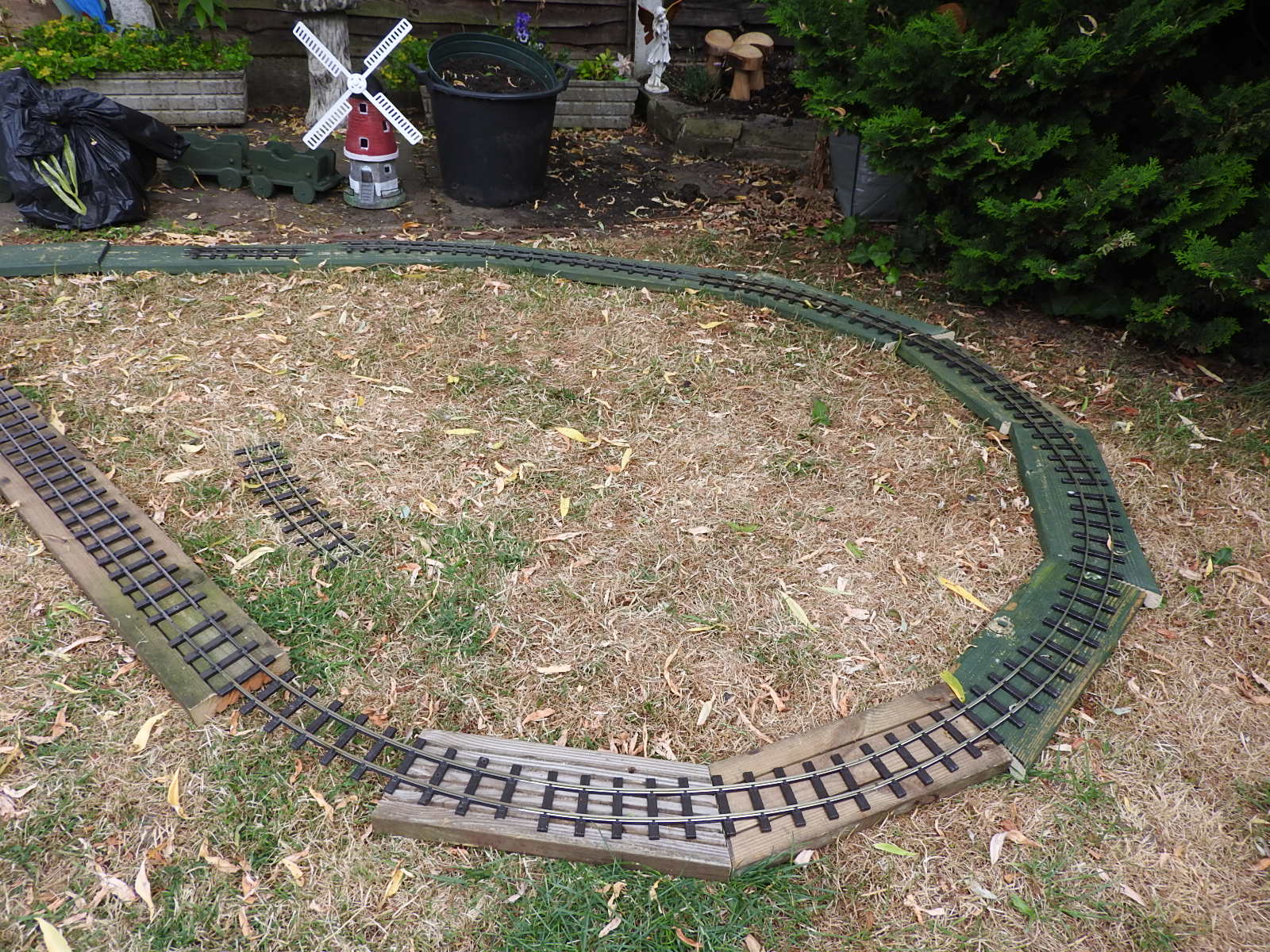 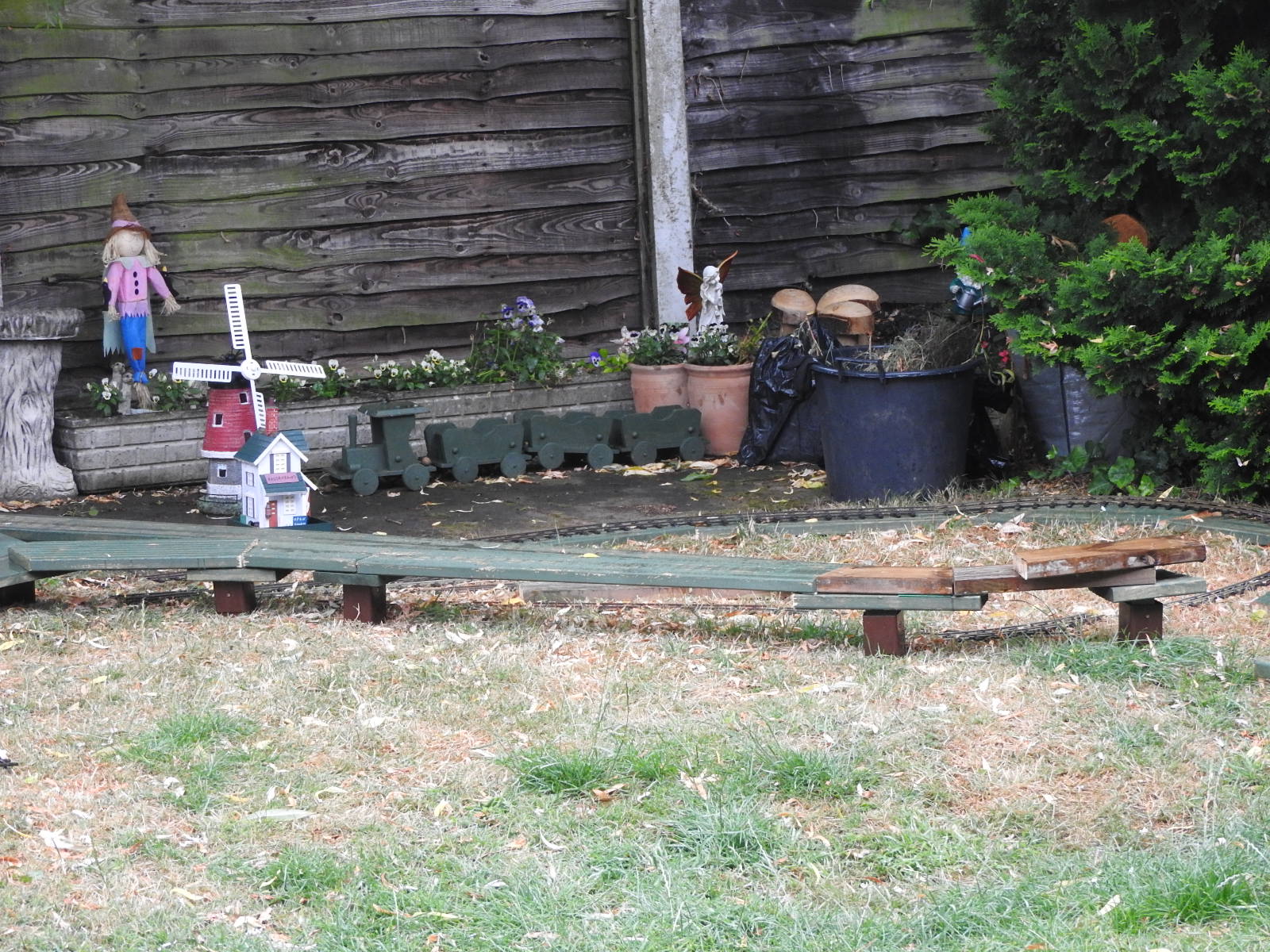 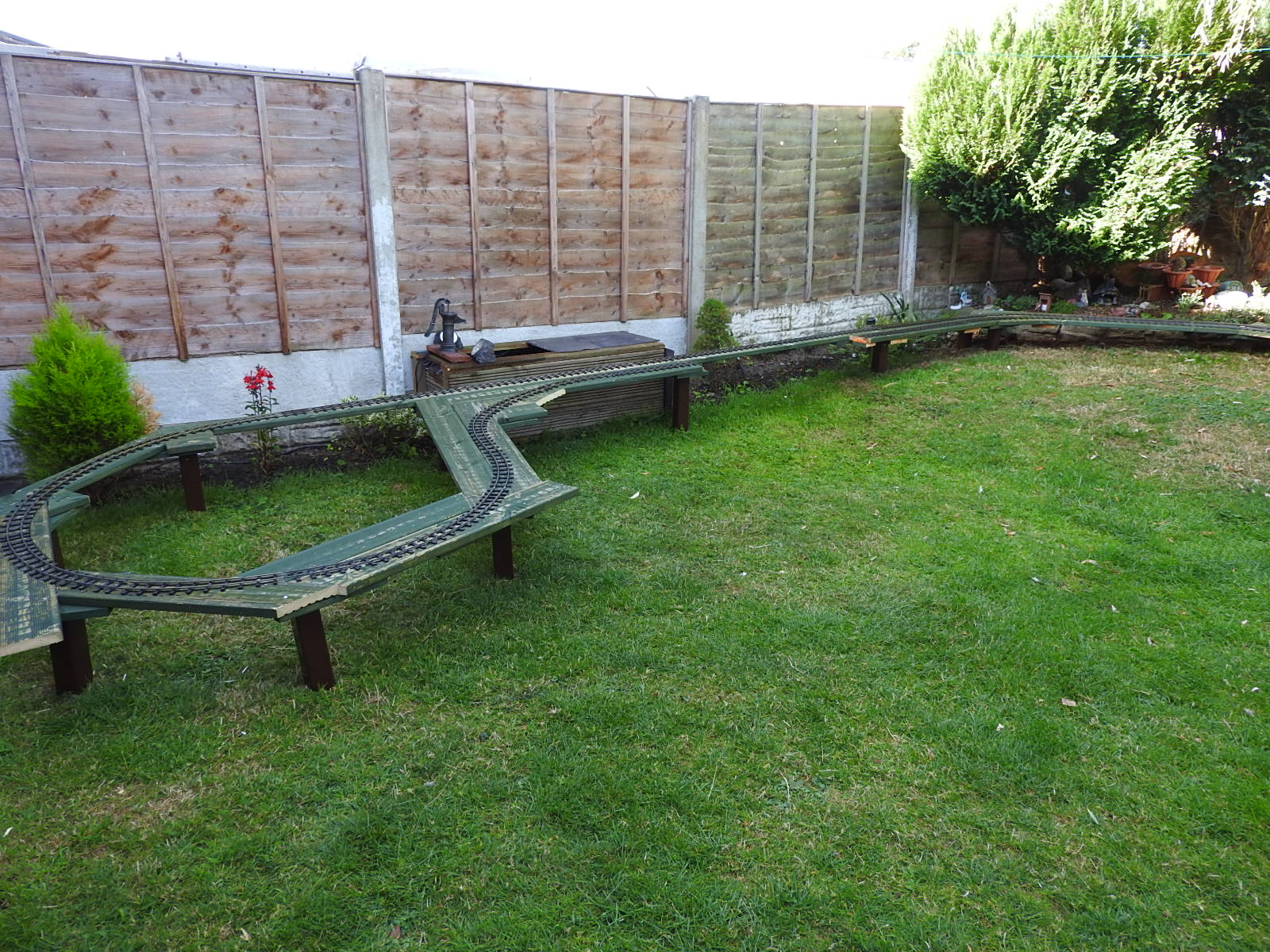 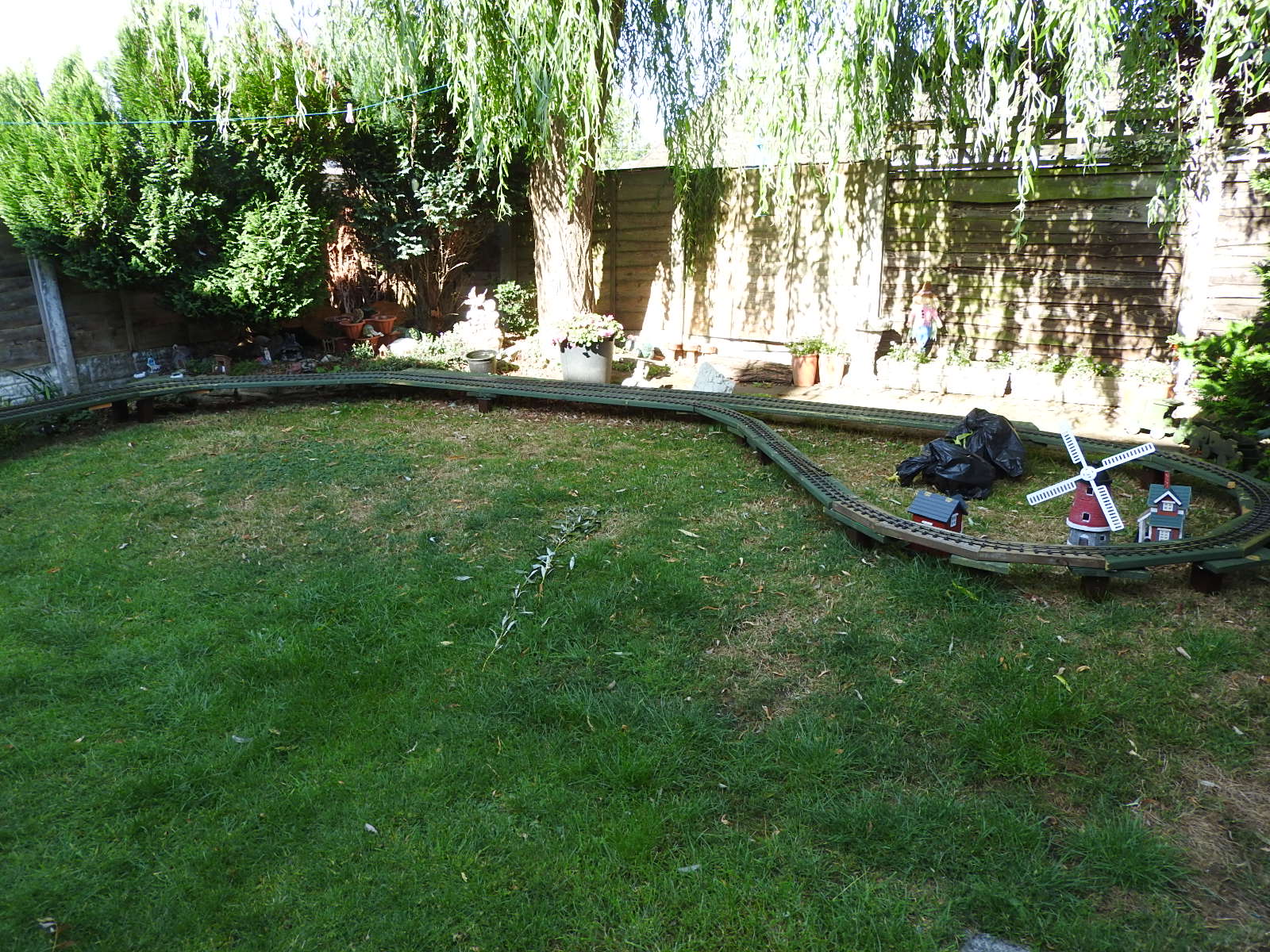 That’s all for now, been told by Anne not to spend too long on the laptop, I do get tired fairly quickly. So some more will be added next time.
Rod

Well done Rod, with perhaps a little help? Soon be running your trains again and getting some pleasure from you hobby after the enforced break. Don't overdo it too soon, enjoy the moment and show us the pics.
The best things in life are free.... so why am I doing this?
Top

Wow Rod! Thats incredible progress. It's great to see the new line emerging. It's looks like a well thought out and well designed line too. As Peter says, take it steady - but power to your elbow! Looking forward to seeing more.

Looking good Rod. You'll soon be up and running, but take it easy and don't try to rush at the expense of your health.
Ian
Top

Finished the bridge…It needs a load of fettling done with it. All the top struts and the two long top rails need replacing because they were too rotten to try and fill. Did a bit of filling though on the angled struts, they seem to be ok.

The paint work before was a light coffee colour, so I used this to redo it with, 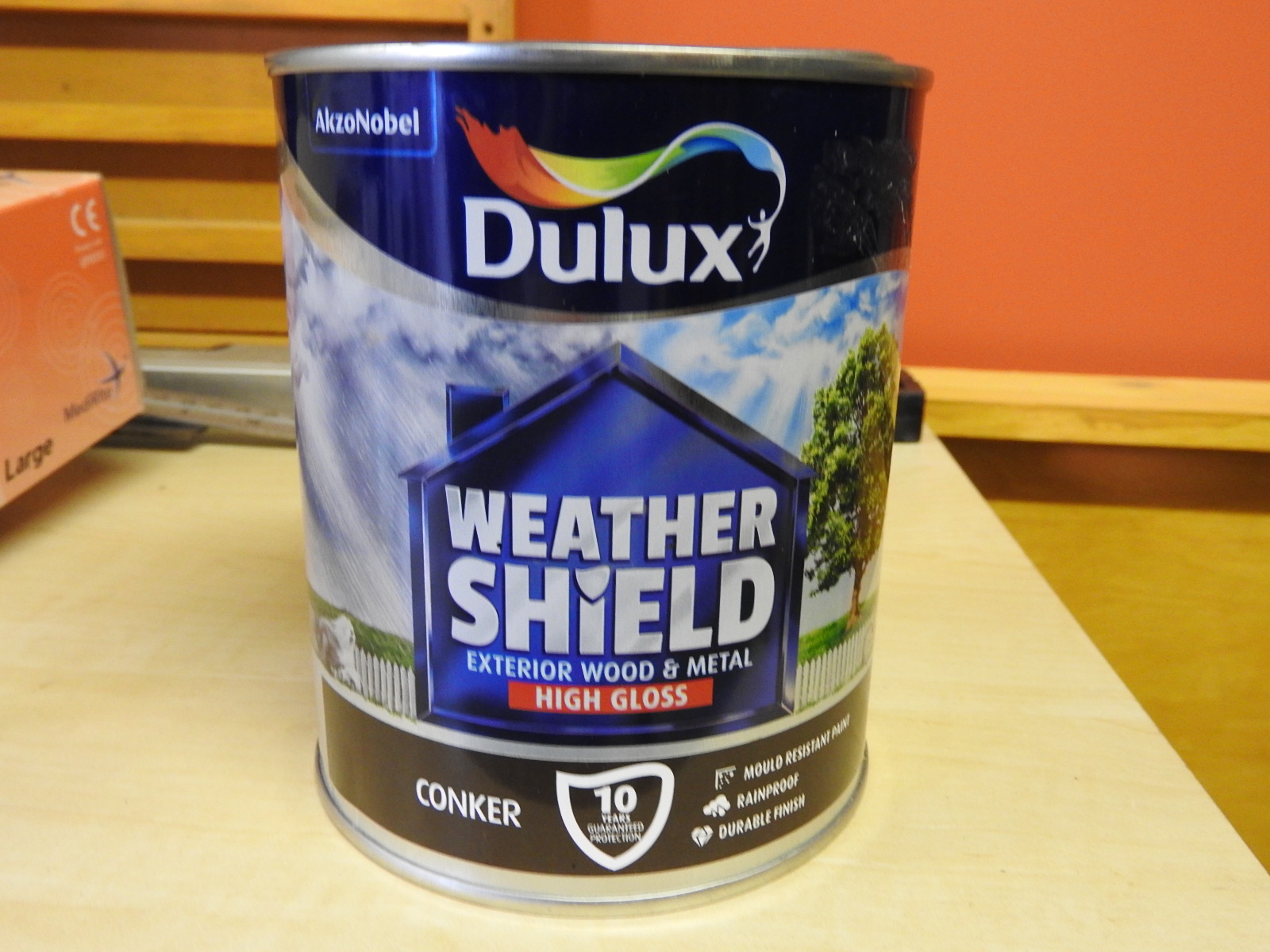 Didn’t realise though it was High Gloss Paint

But I am hoping it will weather down in time…Might be a long time though I feel. 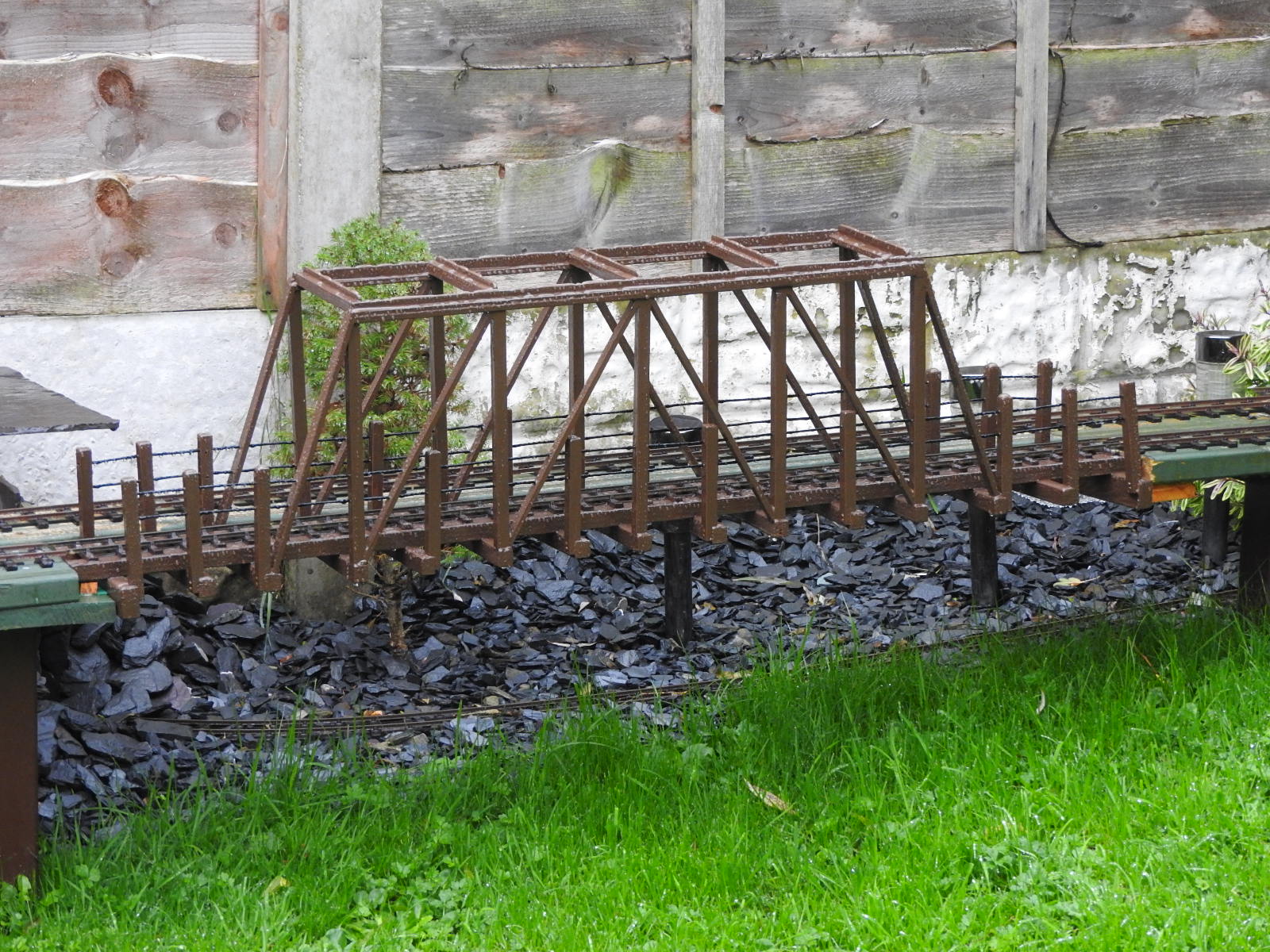 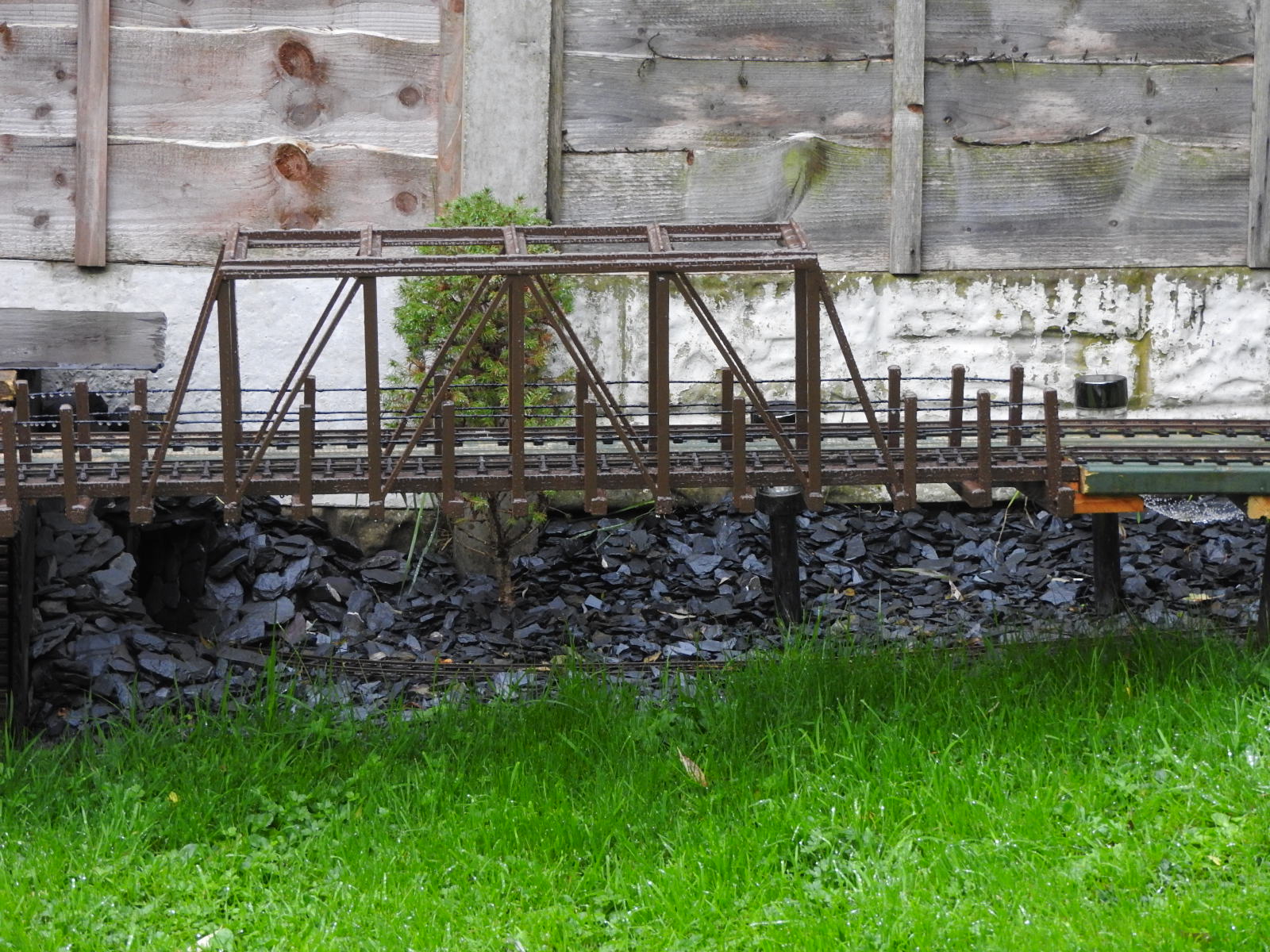 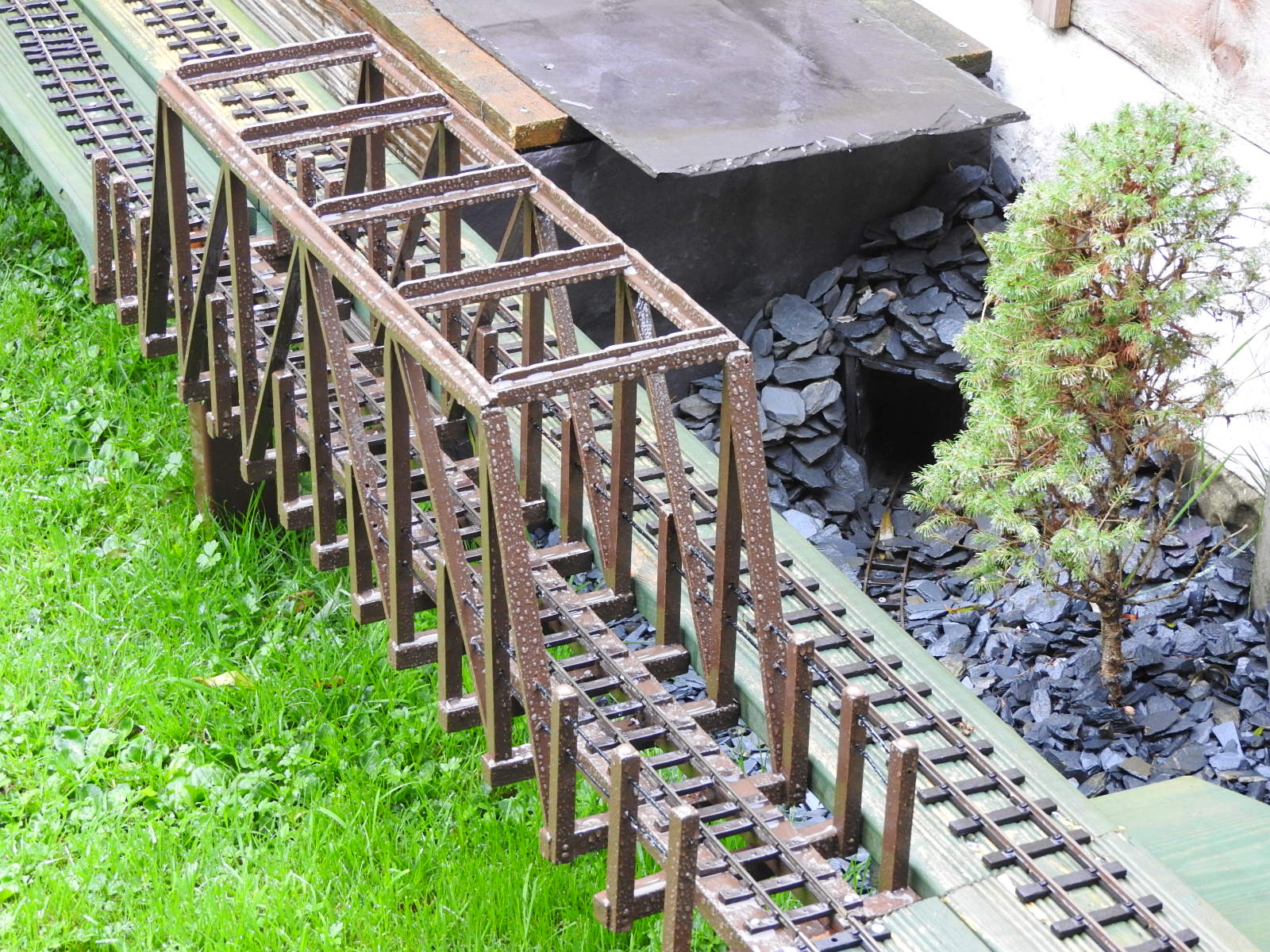 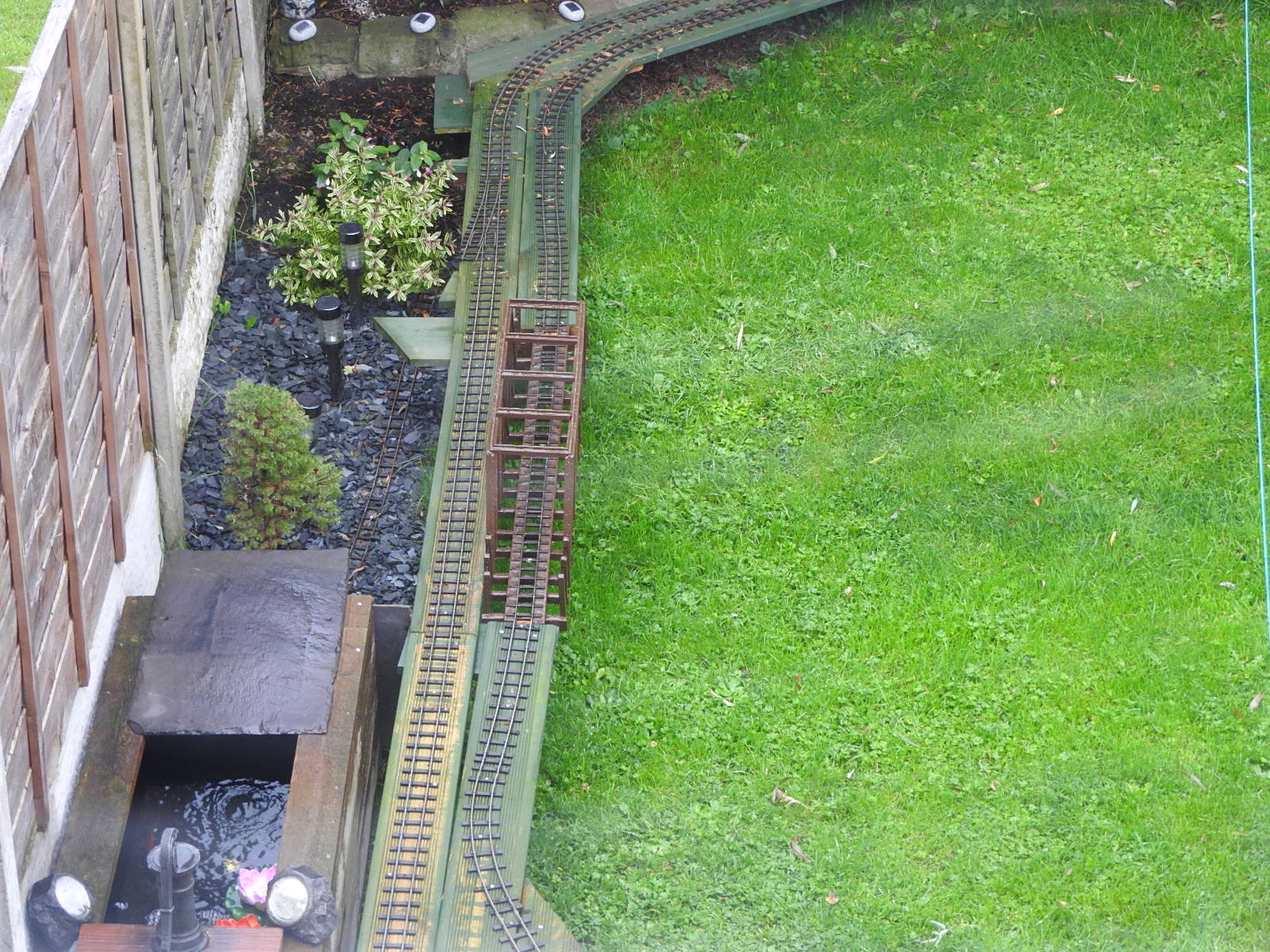 The slate underneath and at the back is Anne’s Slate Mine. It will run up to the back of the line at the top and I am going to try and do a loading stage somewhere along it.

This is what I did plan for the Station, but I have now decided against it. 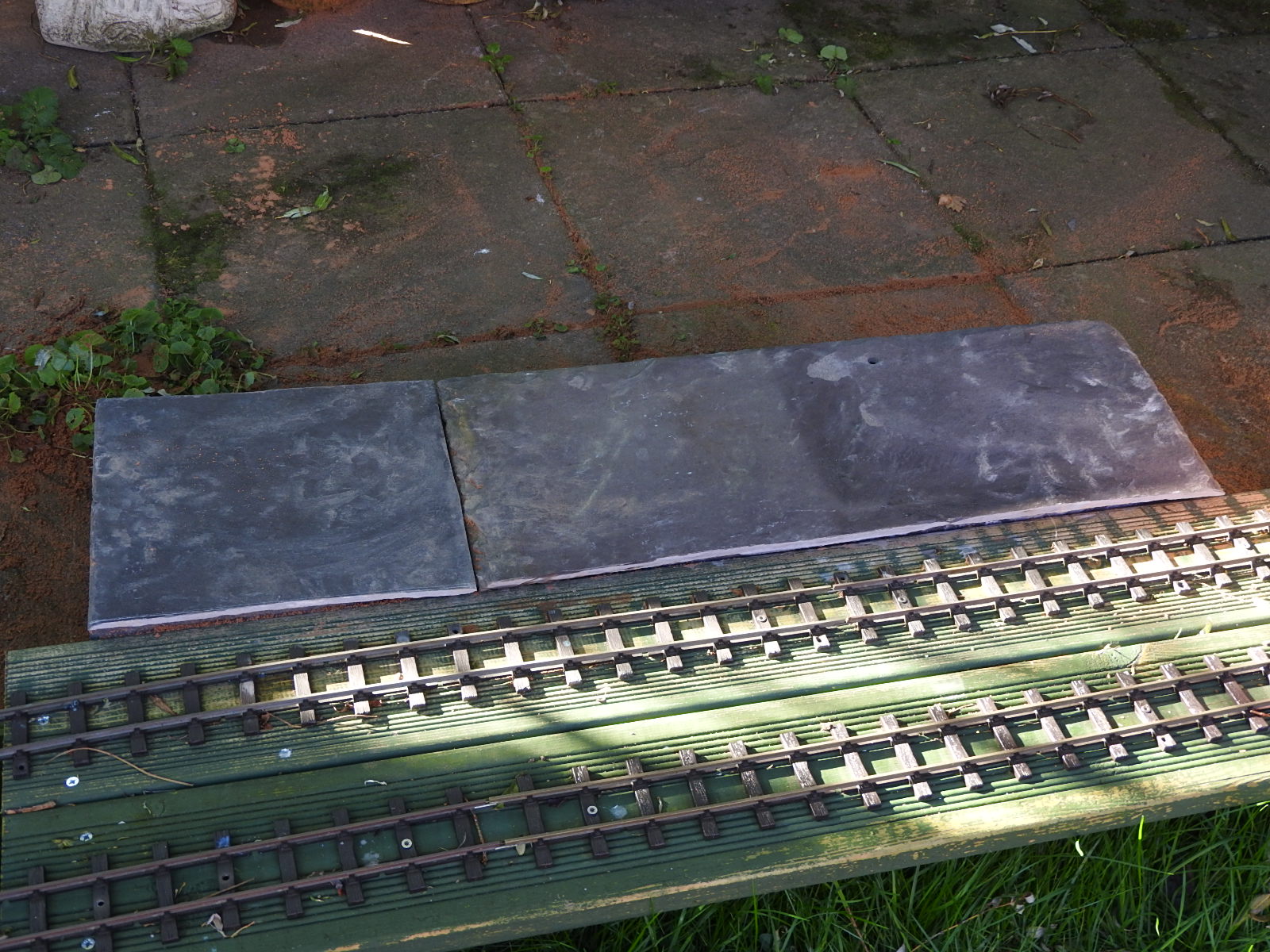 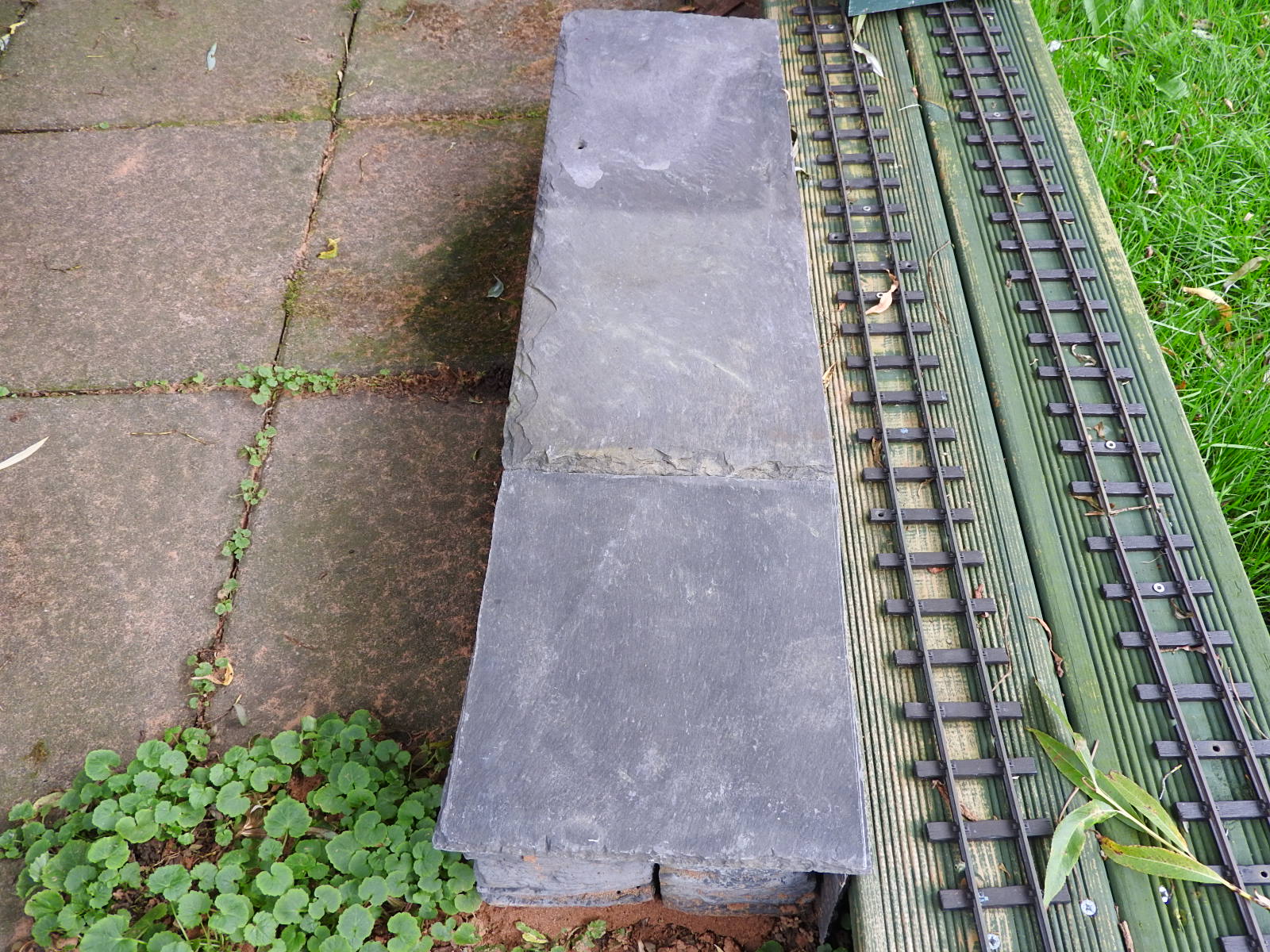 I like that bridge Rod. The colour looks fine and it will weather so don't worry.
YouTube Channel
Top

That's one of the things that I like about garden scales, at the usual viewing distance one doesn't notice how glossy or matt anything is. I think that you are concerning yourself unnecessarily about the gloss on the paint and anyway after a few weeks of our typical autumn/winter weather it will be unnoticeable even close up.
Phil
Top

coming on nicely Rod. Don't worry about the colour. It looks fine and I doubt you'll be aware it is glossy. Especially in time as Tom and Phil have already pointed out.
Ian
Top

A nice garden layout which is giving me plenty of ideas, I do like the bridge and it will weather in nicely.
Kevin

I have put my take on what I used for the slates.

I used a wooden window blind I got from a charity shop for £5. I cut them up into 30mm x 22mm pieces, there was about 200 of them, I know, that must of been a job and a half. I did use my new bandsaw that Anne bought for my Birthday, it was the first time I had used it and boy I am glad Anne got it me. 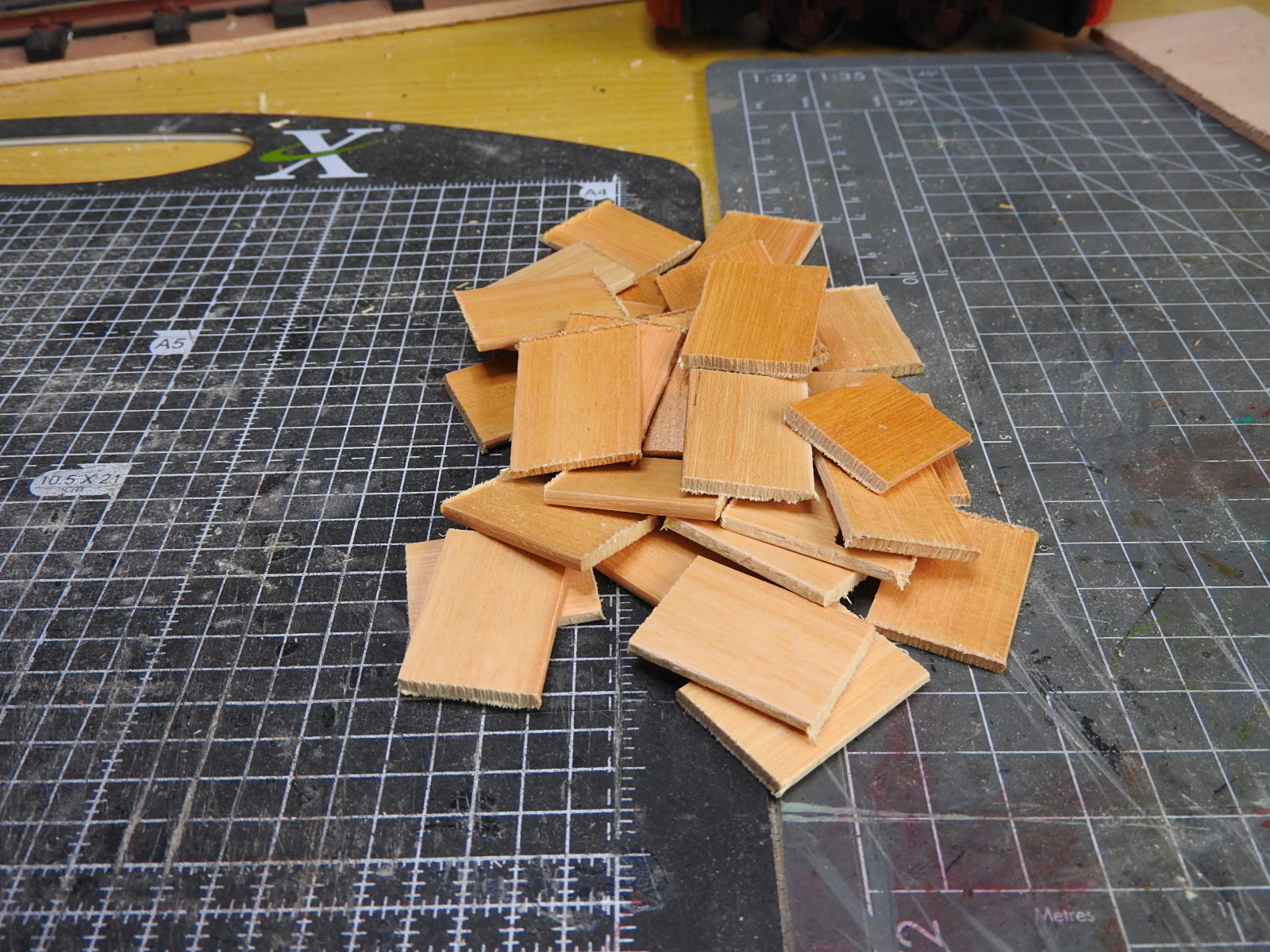 They fitted in quite easy, but I did need to make some slightly smaller by about a 1mm. Here they are in the wagons. 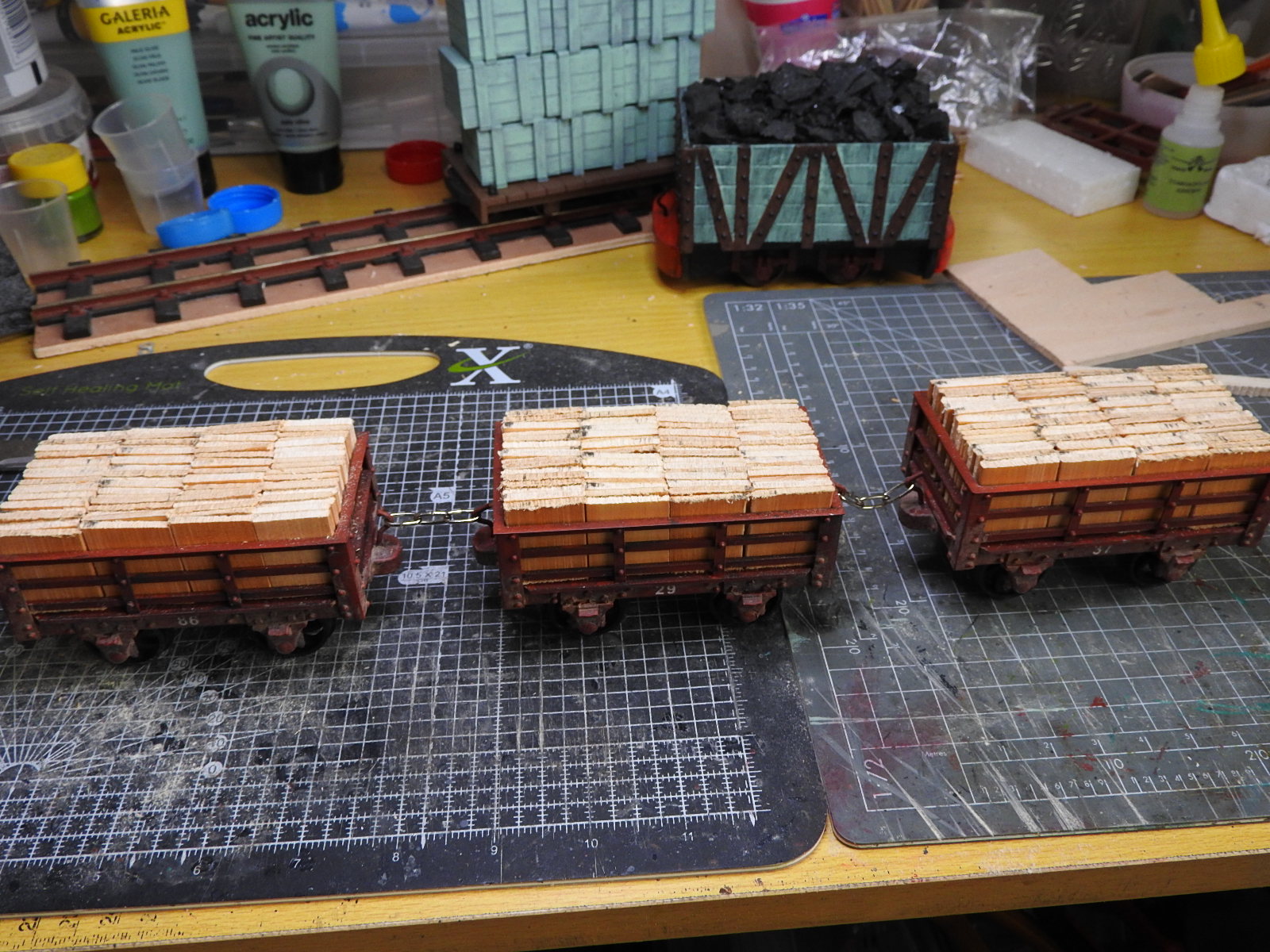 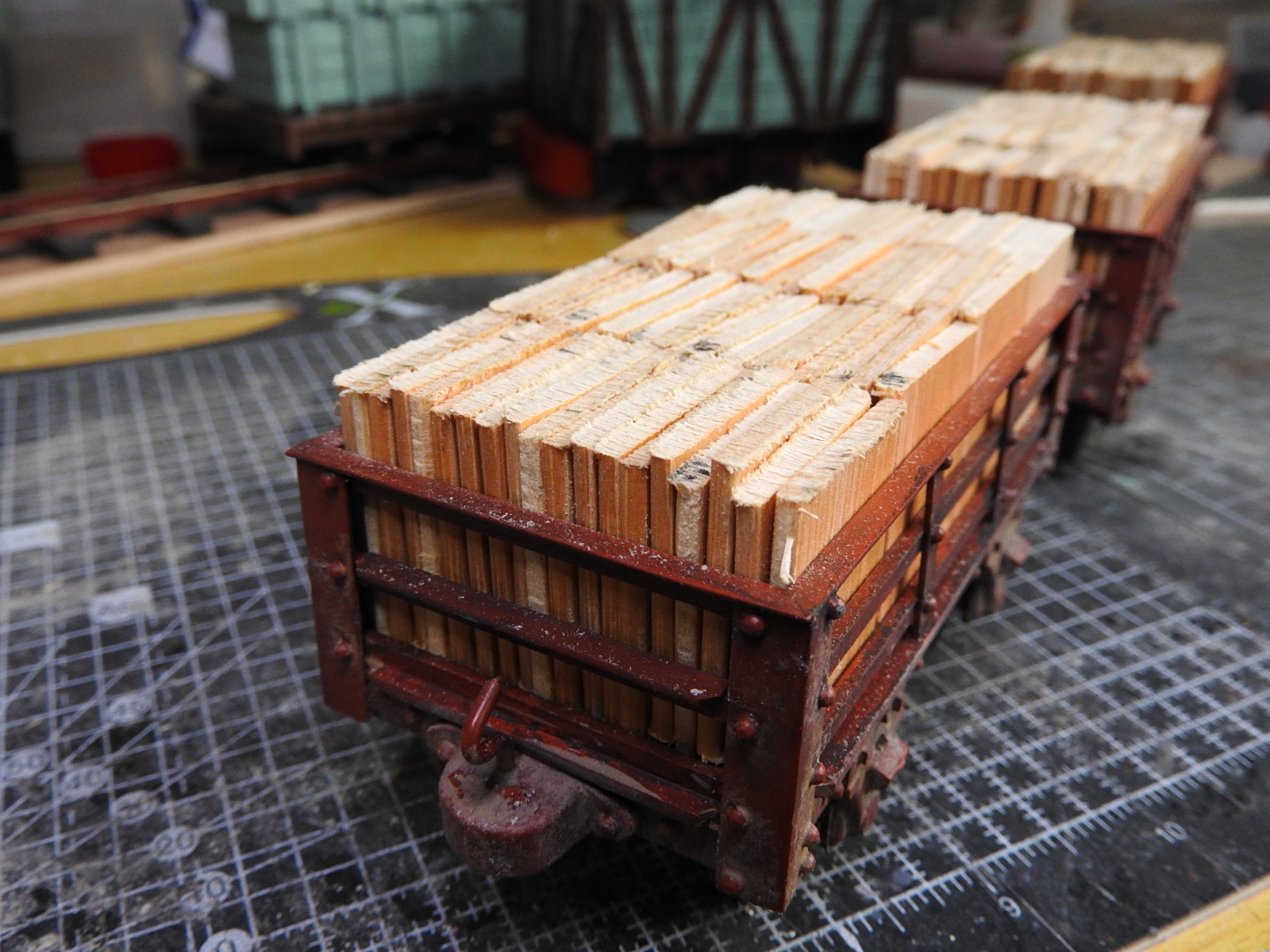 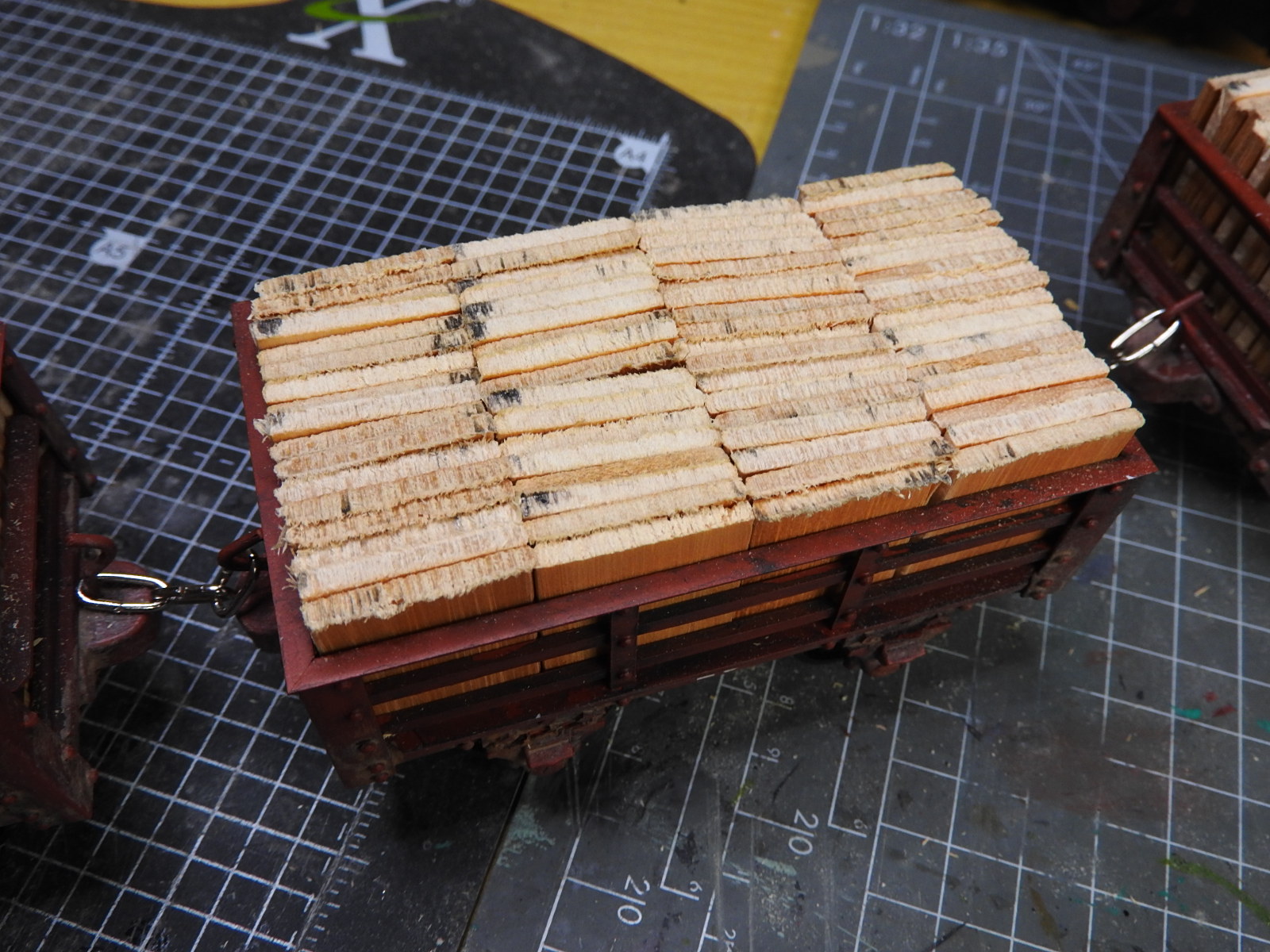 I painted them with some medium grey paint. I didn’t paint them all, just the two ends and the four middle, then just painted the tops. 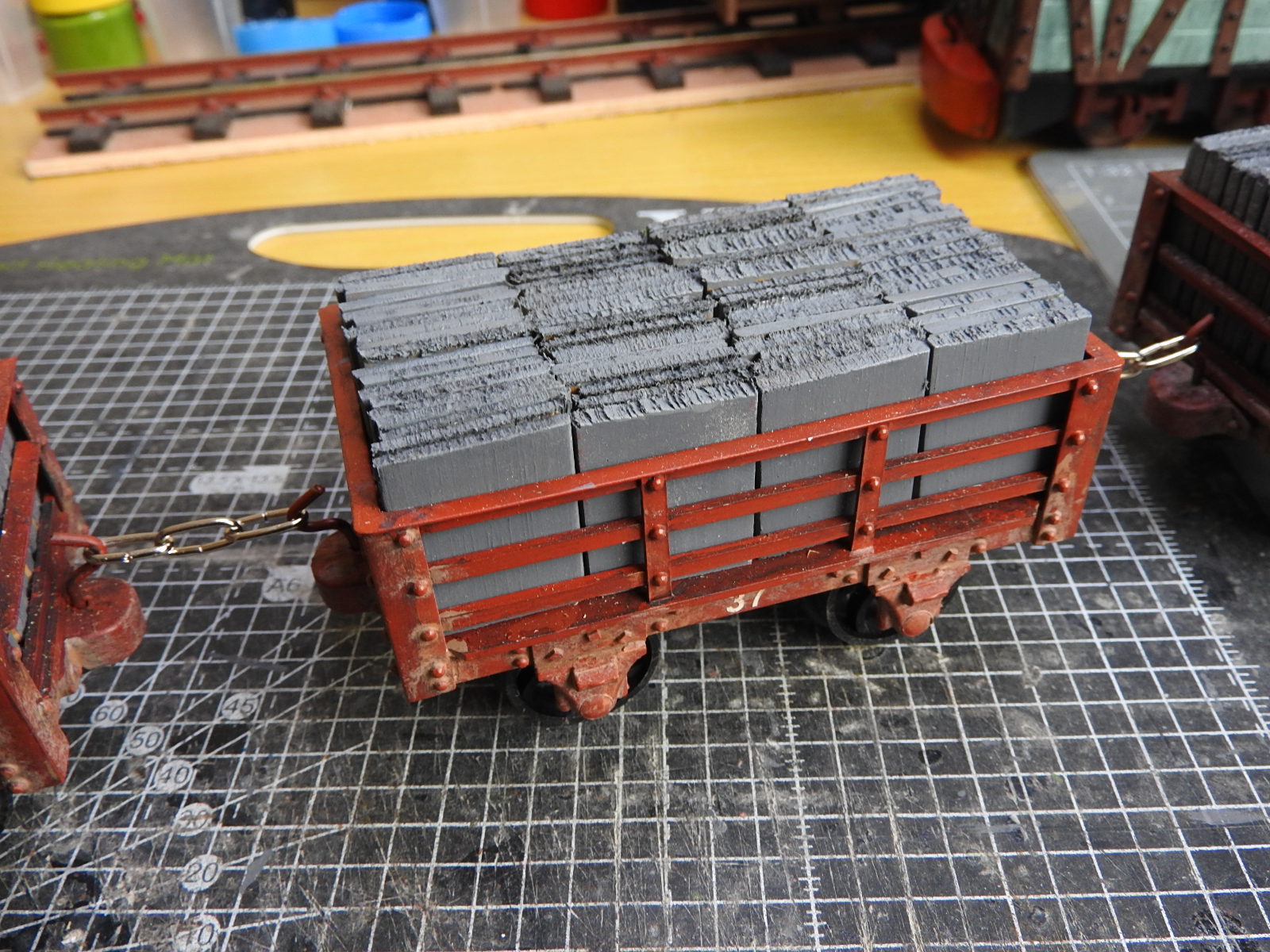 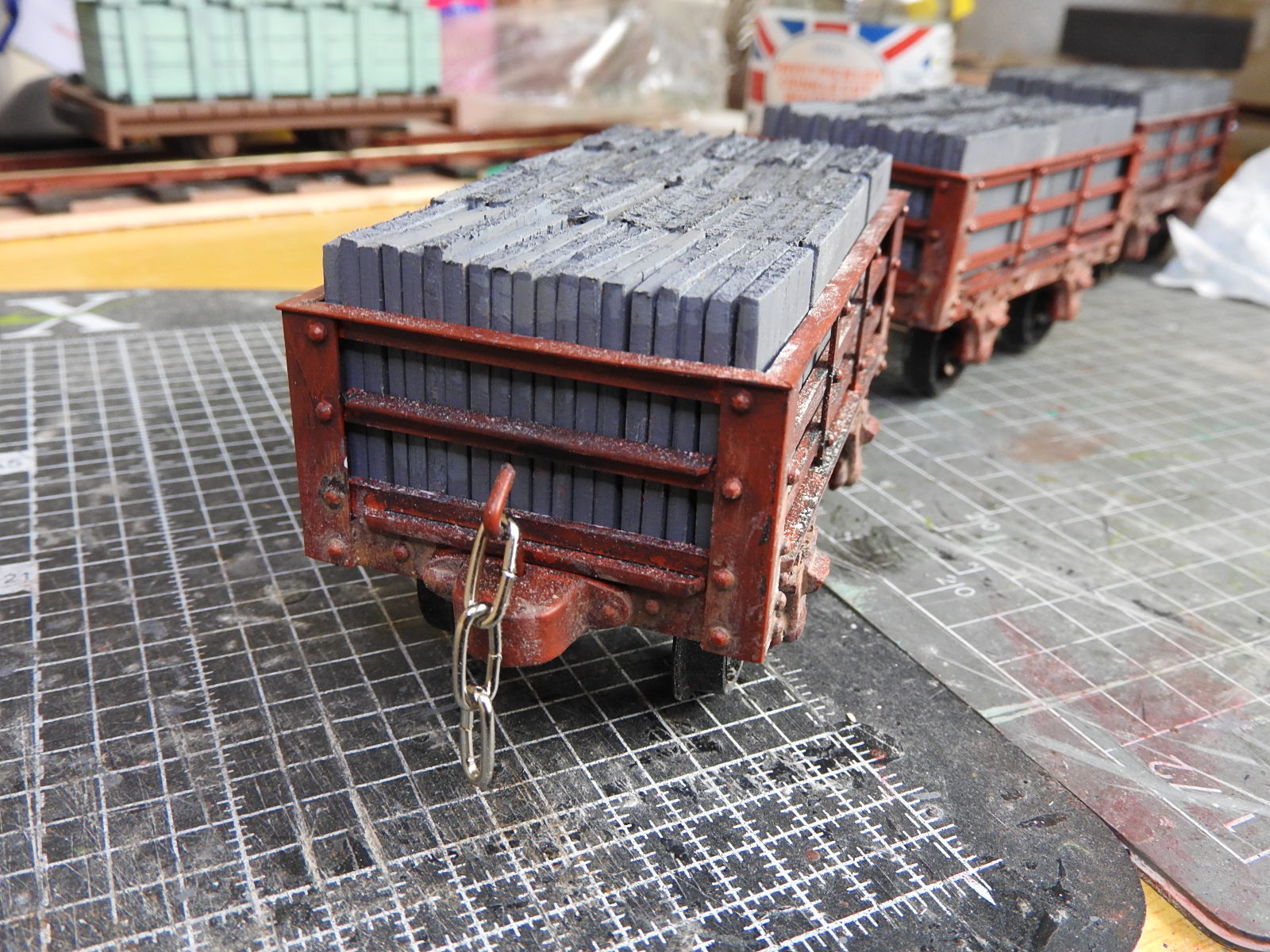 I think they have turned out ok. Anne thinks they are worthy of selling…I don’t know that, but I am happy to do some for members, but they would need to paint them…..

Very convincing and the easiest DIY slates I have seen!
YouTube Channel
Top

Back for a browse (4mm bug still infecting me), good to see you modelling again Rod and agree those edģes on the slates look really good.
Top

Rob a nice job on modelling the slate very lifelike.

Nice to hear from you Derek, I was wondering where you had disappeared too.

I have given up on my N gauge stuff, far too small for me now, although I do have some Locos and rolling stock still, which are brand new most of them. Anne says I need to get rid, I do I know, but I don’t want to sell them to traders, the guy who bought most of my layout ( which was in excess ) of £2500 spent. I sold to him for £800, he told me he was a private buyer, next thing I see he is selling the stuff on FaceBook…..Oh well you live and learn.
Rod

The slates on the wagons are easy enough to do Derek, and if members want some just PM me and I will sort some out for free.

I have done a kit from HGLW, a Wittenberg Schafer Loco, it’s not a bad build as ge_rik has said. If you follow his thread and Blog he will show you how he did his building of it. So I won’t bore you with my account of it, although I have put a few extras on mine, like the rivet heads on the buffer beams, also I have put working light in with a separate power supply. There are a couple more like a handle on the driver controls, it was the first time I had done any brass soldering, it was easy enough to do, it was just two pieces of brass rod soldered to make the handle. It has given me some confidence to try a bit more on maybe a loco.

You can see the handle in the photos.

This is it, it doesn’t yet have any glazing in, I have run out of the glue I use for it and there are a few little things still do on it. I did do the outer frames like Peter Butler did on his coaches and although you can’t see the effect that good in the photo’s, they really do make them stand out. 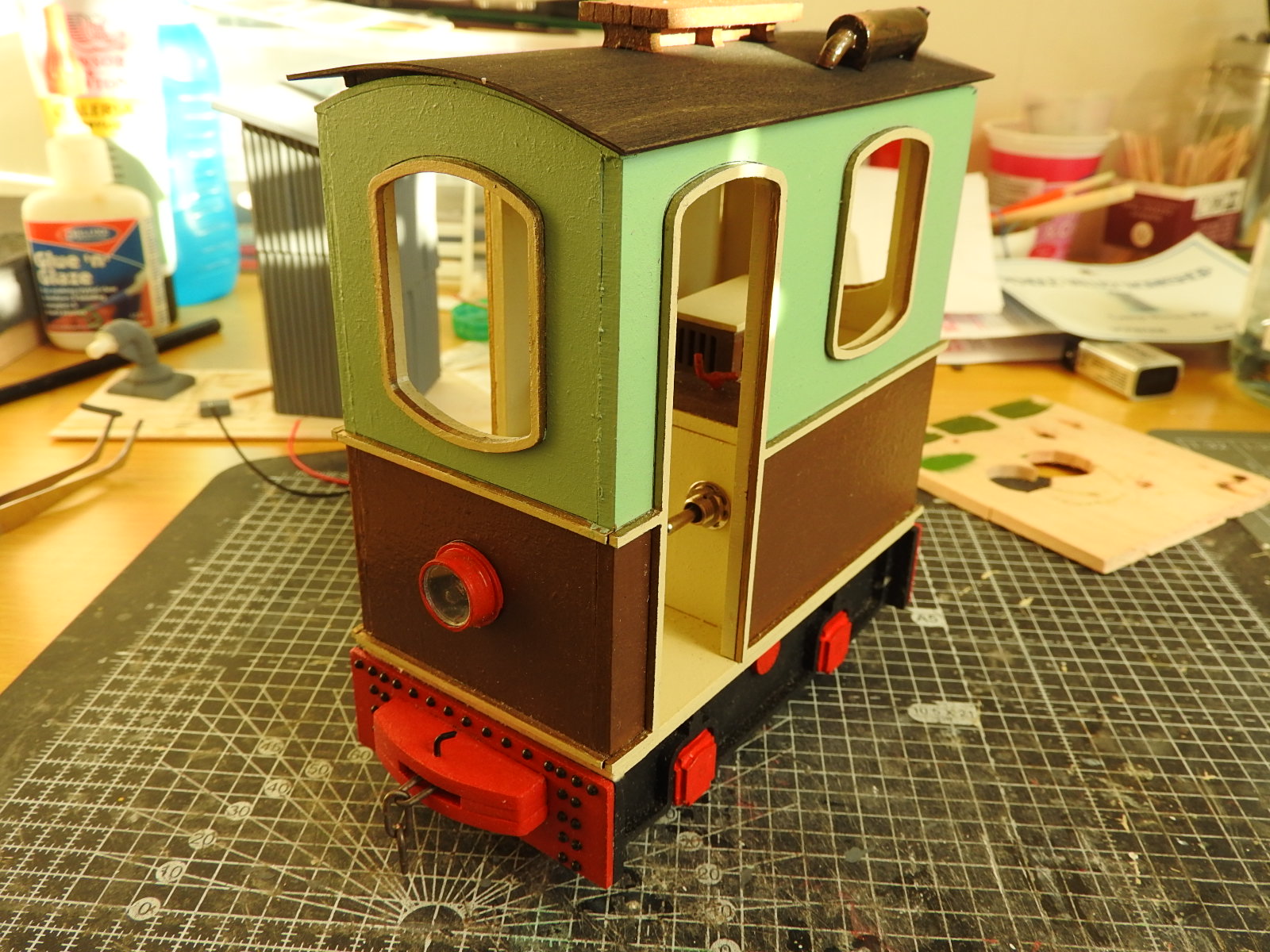 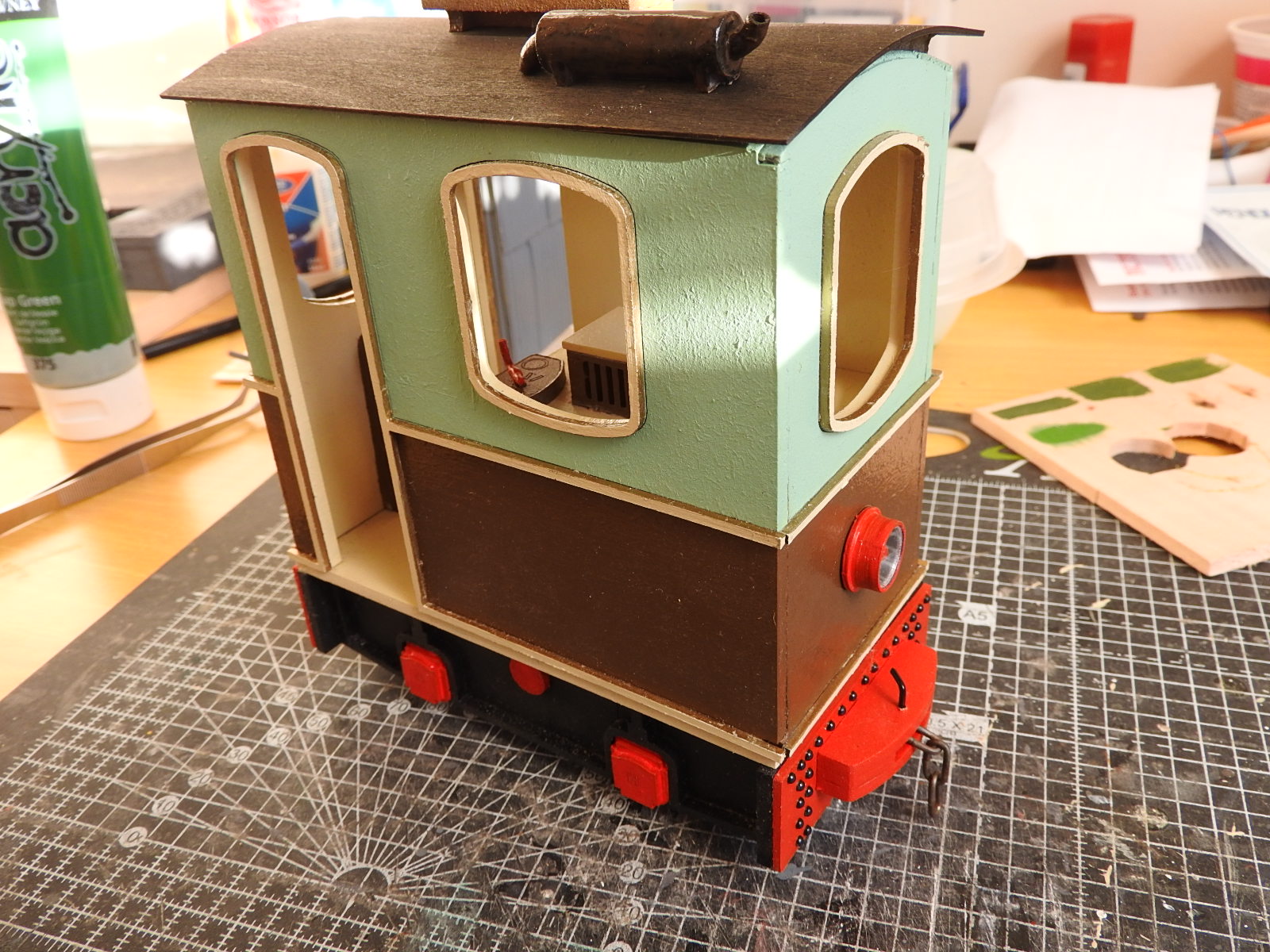 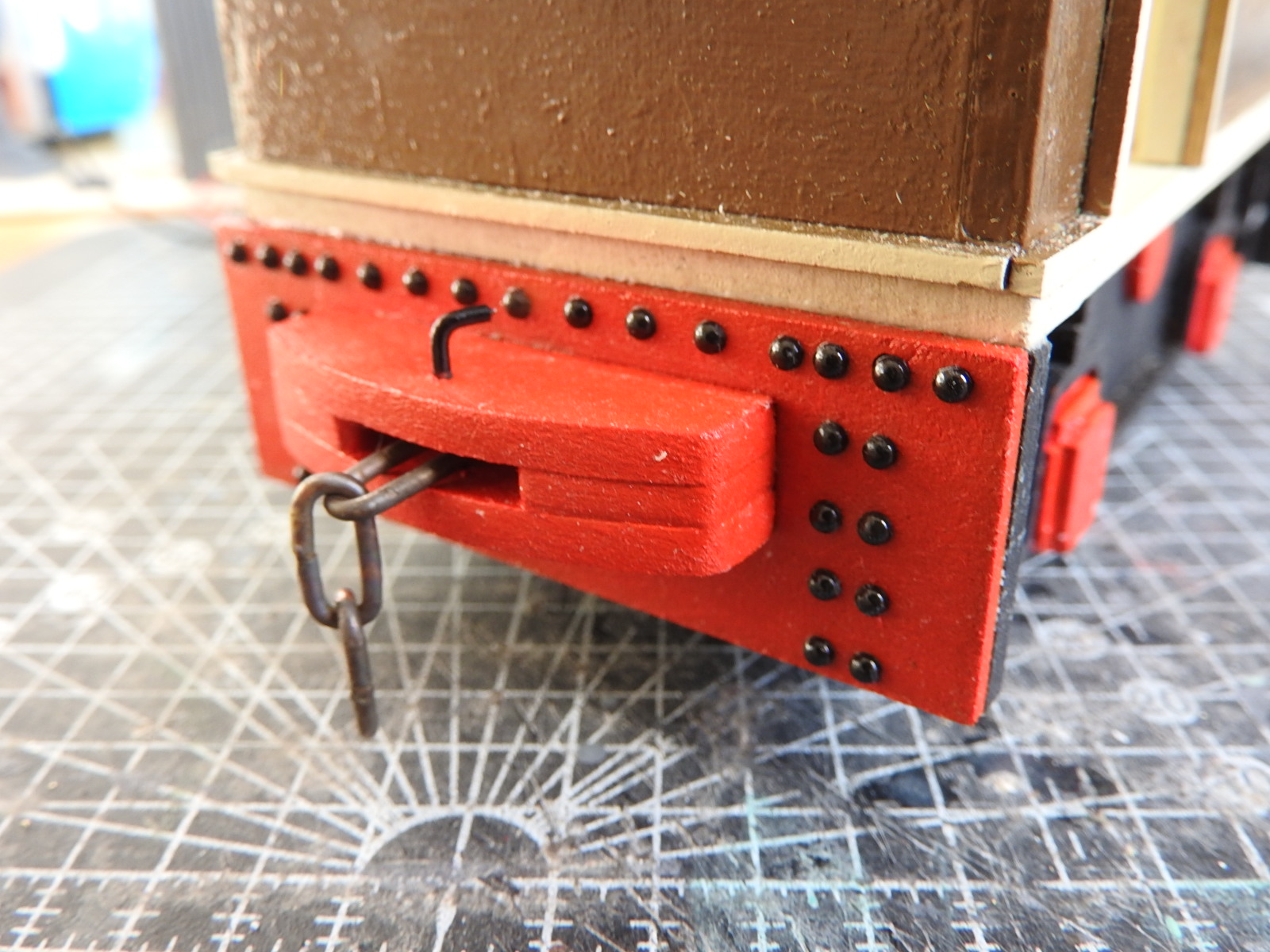 You will have noticed that the roof is not laying properly, thats because I just put it on for the photo, it does need to be removable anyway for access to the batteries. I did the roof with some stain I got from the Yorkshire Show, I think it looks ok.
Rod