The L.N.R. represents no particular railway, although it borrows heavily from the Victorian (Australia) Railways narrow gauge system of which Puffing Billy is probably the most well known. After the constraints of modeling the Victorian Railways in 5inch gauge, and HO to a set period, and upon moving back to the garden, I wanted to be free to choose locomotive types, rolling stock, liveries etc. and also to be free to use the landscape as presented, one of the extra benefits of the garden railway. With very few exceptions, I don’t believe there is anywhere you cannot build an outdoor railway of some kind. The railway and its surrounding landscape is a constantly changing environment, much as a real railway. Track formations and infrastructure must cope with these changes, and the ravages of sun and rain mean that the ‘permanent way’ is a much sought after dream.
I enjoy the many aspects of a working garden railway: the engineering skills in building locomotives and rolling stock; the civil engineering aspects of putting a line through the landscape; and the research work involved in finding facts, measurements, photos, drawings etc.
Australia is a big country - our railways in the 1920’s covered large distances in a harsh environment, and with little habitation. Artists talk of the ‘light’ in the Australian landscape. This ‘light’ and space is something I wanted to re-create in my railway, and although narrow gauge railways, by their very nature took up less space, their orientation at stations is one of length not width.
To this end my railway is not long, containing only two main stations and a small halt, allowing the taking of photographs without having other tracks in the background. If I could only remove fences, life would indeed be good.  I gain a sense of distance by running three laps of the track, after leaving the main station of Leawarra,(Mile post 19) to arrive at the halt, Warringine,(MP 32) followed by another three laps to arrive at the ‘terminus’ of Nayook.(MP 38)
Traffic consists of passengers, general goods, and timber out of Warringine, but because of a trailing siding, it is forwarded via Nayook anyway.

Mile post 19 in the middle of Leawarra yard. (to the right of buffer beam)

Mile post 38 opposite the crew room at Nayook.
Top

Grant,
Yes, it does all look fantastic.
Are your buildings etc left outside permanently?
Philip
www.tinyurl.com/philip-trains
Top

Thanks fella's, and yes Philip they do stay outside. I have occasionly brought the garage, store, and station building in, to dry them out for maintenance, and of course the Mill stays out all the time.
Grant
Top

I love what I've seen of Australian railways. It seems like you can take the elements you like from both British and American styles and mix them almost with impunity. It must be a lot of fun to model.
Top

Very impressive, love the australian railway scene with as already mentioned elements of Uk and US railways, and the VR is facinating!
Top

An excellent description and more wonderful photos. I really can't get over how realistic your line looks. The mileposts are a wonderful touch. I look forward to seeing more of the line in due course.

I think the fact that the line has been down for some 12 years probably helps Andrew. I look at old pics. and see how sparse it all was back then. The 2nd. pic. above was obviously taken in Spring with that much green around. We're under drought conditions here now, and we've lost several plants on the railway and elsewhere.
Grant
Top

Your photos are excellent. Maybe it's because the ones you've shown so far are at about the same level as the cabs of your locos. :?:
Top

Interesting point, mate. I think you're right. One of the beauties of the digital camera, you don't have to have your head stuck behind it to look through the viewfinder. I take many shots with the camera on a block of wood (as much to stop it shaking around ha! ha!) and of course you can poke it anywhere then.
Grant.
Top

Loco Requirements at Nayook, smokebox ash removal and a top up with water. 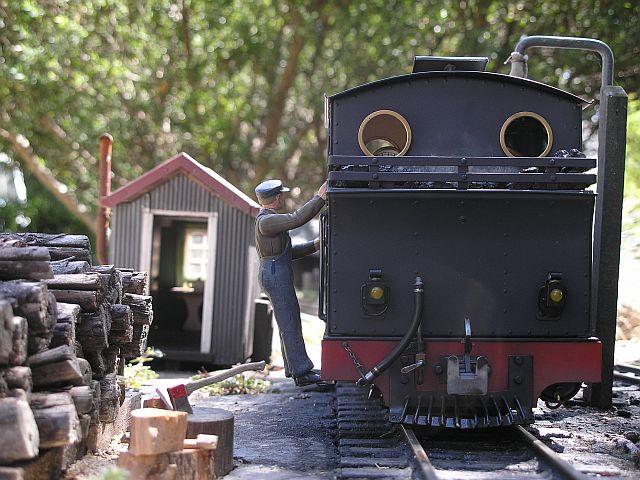 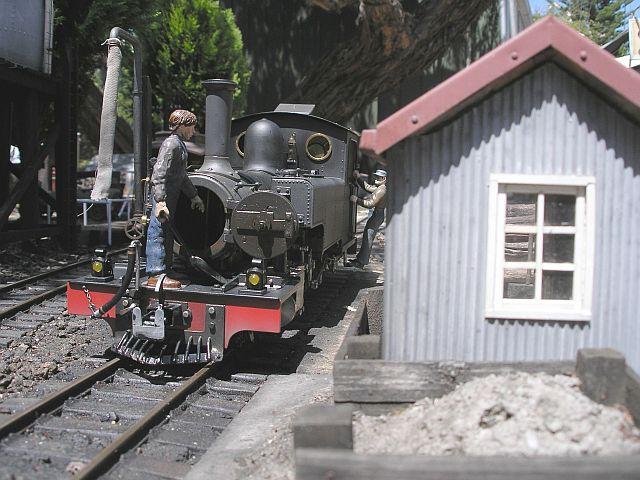 After the morning mixed has been made up ready for a return bunker first to Leawarra. 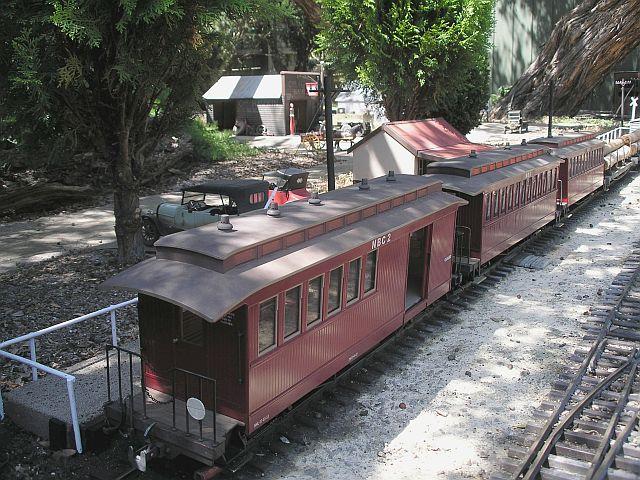 It's getting too hot outside these last couple of days. One train does me in, roll on Autumn.
Grant.
Top

I find it difficult to accept that this wonderfully detailed railway is outdoors! In the UK most, if not all, of this would have been either washed or blown away after being generously covered with a coat of green slime.
I won't be moving to Australia but you do have an advantage over us at times. Although, if it is too hot for you, it would be impossible for me!
The best things in life are free.... so why am I doing this?
Top

High praise coming from you Peter, having read of your Railway (you have something I crave, no fences in the background)
I've wondered how you guys put up with a railway that goes under snow each year. But then we have that equally destructive and invisible killer of all things of lesser materials and glues, UV. It's taken time and experimentation to adopt building techniques to withstand this, and coming from the marine industry, I thought I understood harsh environments.
Grant.
PS. the axe, chopping block and wood do come inside, mounted on a piece of tin. Only way to keep the wood looking freshly chopped.
Top

Fantastic to see more of your railway Grant! I've been looking for more about your railway since I saw the photos of it on the gardenrailway club website. Keep up the great work!
Jake