For some reason this thread has passed me by for a few months. Really like the two most recent wagons - exquisitely modelled and beautifully finished.

I've been using 1mm and 2mm half round nail art gems/pearls as rivets for a while. I'm sure I picked up the idea from another forumite. At 99p per 1000 (Inc postage) they work out to be very cost effective. You can also get hexagonal gems in various sizes to represent bolt heads.

According to this very thread, I started using 'em back in June 2015, so unless anyone's use of nail gems predates that, I'm claiming it! One of the benefits of having teenage daughters!

How do they do them for that price?! Perhaps I don't want to know...

I had a look for hexagonal ones a while ago (on your advice Rik!) but couldn't find any think enough for my needs - perhaps it's time to trawl that corner of the internet again!

Actually, thanks. Cambrian are good - especially for 'nut + washer + bolt' heads but the nail art pearls save having to cut the rivet heads off the sprue.

I can't find the hexagonal pearls I bought but found these which might do the job (£1.25 per 1000 inc postage from Andover)
https://www.ebay.co.uk/itm/1mm-Chunky-H ... XQvTlRiWbl

I'll probably do one in British Army olive green, I've got a few BW pictures so I'll have to see if I can interpret the colours of the rods compared to the rest of the locomotive. I can imagine that the two tractors were pretty much as they were when they left the army surplus depot.
Limitations only exist if you let them.
Top

JMORG wrote: ↑
Sun Mar 08, 2020 8:21 am
I'll probably do one in British Army olive green, I've got a few BW pictures so I'll have to see if I can interpret the colours of the rods compared to the rest of the locomotive. I can imagine that the two tractors were pretty much as they were when they left the army surplus depot.

The WD didn't use Baldwin petrol mechanicals. They were only built for the US Army and the French.

The French ones seem to have been grey, not sure what the US ones were. I doubt either would have had red rods as built. The usual colour scheme in service would have been mud.

I've read that the FR Baldwin PM was an ex French loco that was reconditioned by Kent Construction (Planet loco. builders), so it might have been repainted before sale.

No word from work (a university library) yet on whether (or to what extent) we'll close due to the current crisis, but I'm assuming events will overtake the decision-makers at some point and I'll find myself with a fair bit of time on my hands. There's some DIY to be done, but while I was in Screwfix this afternoon stocking up on paint supplies in readiness, I also bought myself this - THE WORLD'S BIGGEST bottle of wood glue: 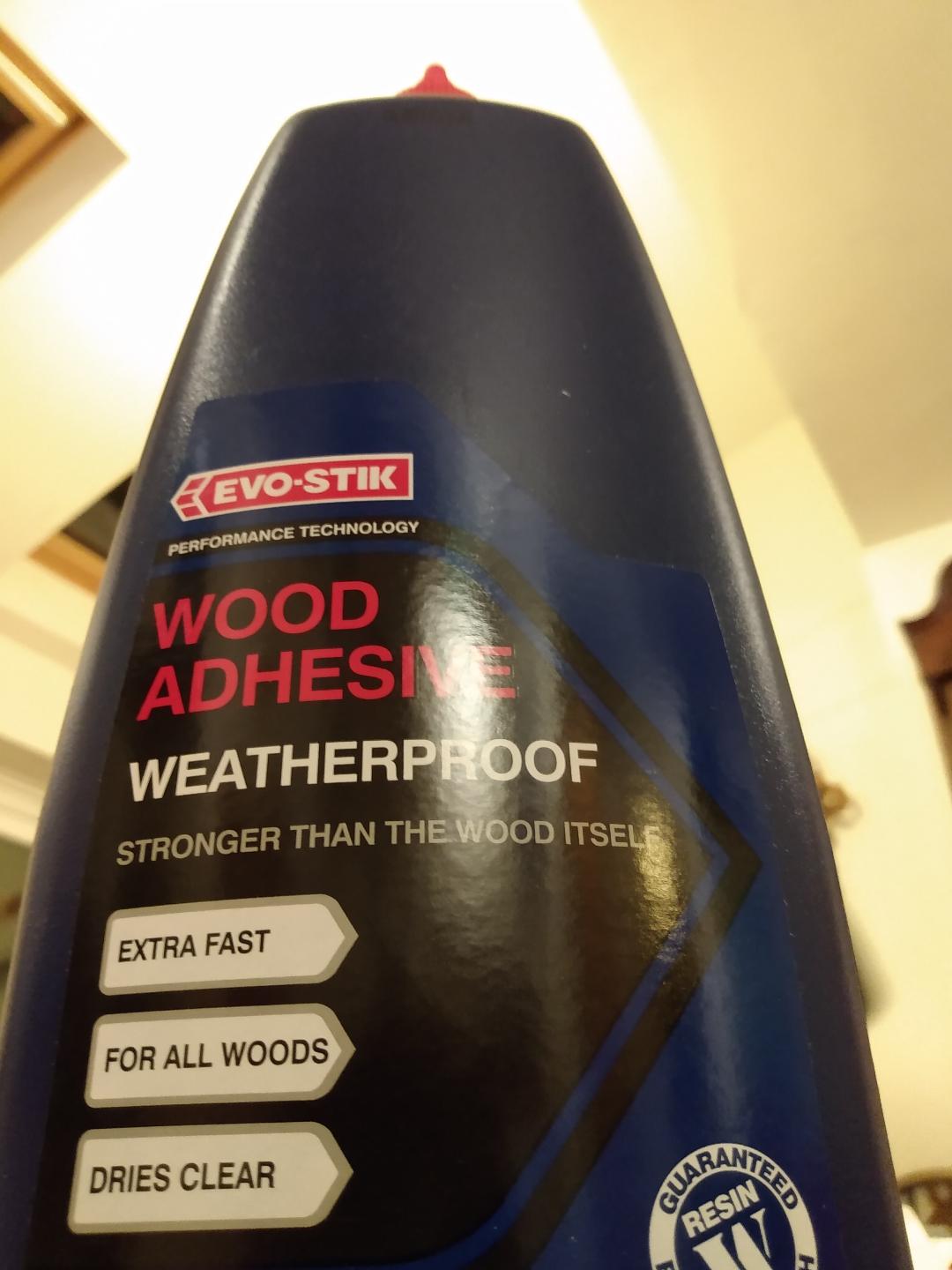 There's a litre of it! Should be able to amuse myself with that for a while. Constructing rolling stock, I mean, not sniffing it...

Do you intend to decant into a smaller more usable container Andrew. Just wondering, depending on the glues makeup exposure to air and evaporation, hope you get to use all of it.
Grant.
Top

When it's empty it would make a good table lamp!
The best things in life are free.... so why am I doing this?
Top

LNR wrote: ↑
Wed Mar 18, 2020 1:57 am
Do you intend to decant into a smaller more usable container Andrew. Just wondering, depending on the glues makeup exposure to air and evaporation, hope you get to use all of it.
Grant.

Good point, thanks Grant. I didn't actually want one that big, but it was all that was available, it was cheap, and I managed to sneak it out of the household budget... I'll decant it into some glass jars I think...

Those small squeeze bottles you get now that self close would be ideal Andrew.
Rod

On the whole, I'm not a terribly fast worker. Work, family and other commitments mean that even a simple wagon build can take months to complete, or even longer.

Not this one! This curious beast took me less than a week start to finish: 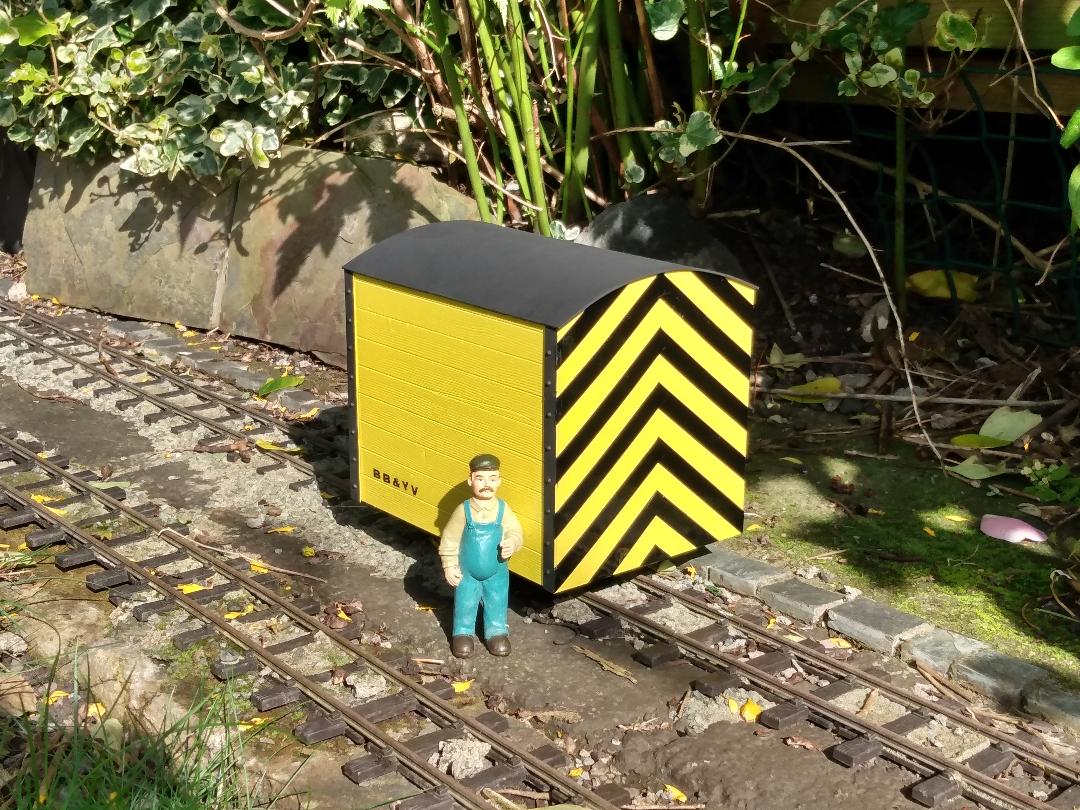 That's not its best side, but even its best side is pretty ugly! It's built entirely from foam board on an old Faller chassis, and has a huge lump of wood inside for weight. As far as I recall, it's also the only thing I've ever sprayed yellow.

So what is it? It certainly doesn't look like anything that ran on the old Welsh Highland, or anywhere else come to that, it lacks detail, is much bigger than most of my other wagons, and with a coupling at only one end it won't be much use in a train...

Well... It's my answer to Network Rail's Structure Gauging Train. I like to have vegetation growing near to the tracks, but find it hard to judge how close is too close, resulting in derailments, damage, and carriages streaked with oil that locos have deposited on overhanging leaves. This wagon is designed to solve that - it's slightly bigger than my biggest loco, so before each run I'll simply attach it to a battery engine and push it slowly up the line, clipping anything that it comes into contact with. I just had a trial run, and it worked really well - those wasp stripes are actually quite useful in spotting leaves etc!

Here it is attached to my new battery loco: 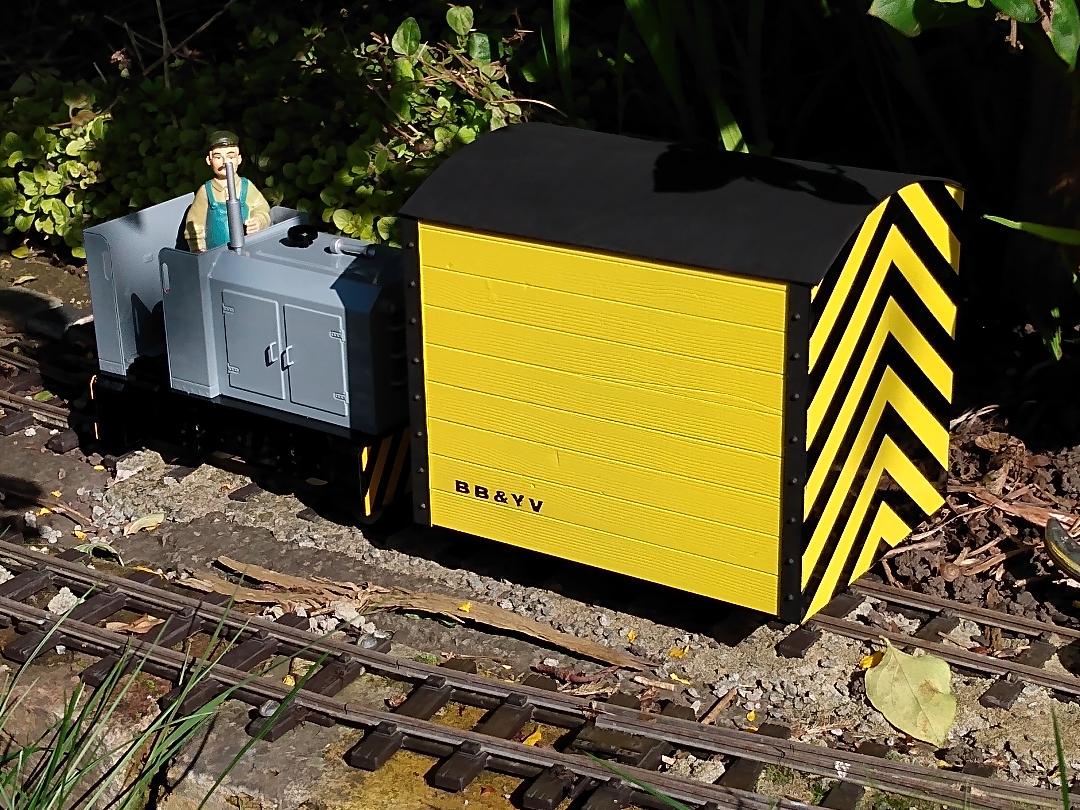 And again, this time in action - ivy can be quite a hazard for trains, as can Ivy, next door's lovely but very inquisitive cat: 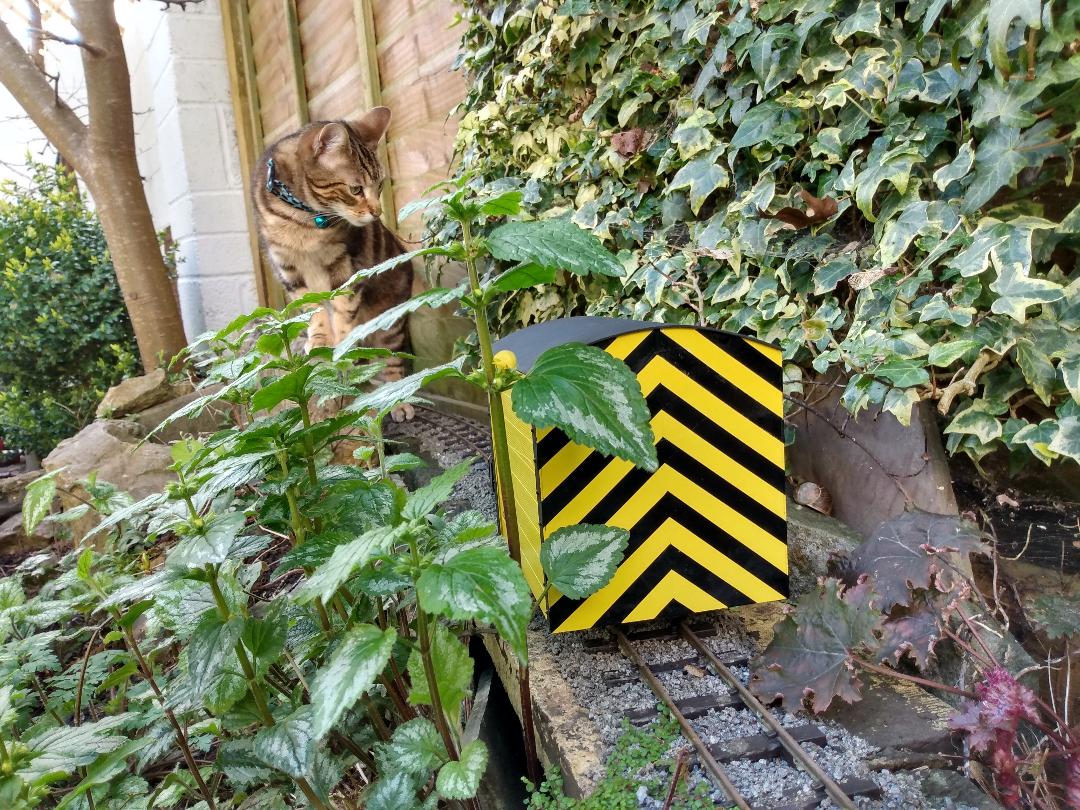 If this weather holds and find myself at home next week, I imagine I may run the odd train - got to keep my spirits up, eh?

Good idea Andrew, hope the wasp stripes keep everything clear ahead cause that driver needs a periscope

LNR wrote: ↑
Sun Mar 22, 2020 11:57 am
Good idea Andrew, hope the wasp stripes keep everything clear ahead cause that driver needs a periscope

I did actually considering adding one, or perhaps a window in the end of the van, but the urge to finish this one quickly and crack on with other things was too strong...
Top

That is a superb idea and it's cheap too. Nothing like saving money, especially now, with what's going on in the world.
Rod

Very good Andrew.
All it needs is a set of whirling razor blades on the sides and it can do the pruning as it goes!
Philip
www.tinyurl.com/philip-trains
Top
Post Reply
536 posts