No idea what type of foam is used for bedroll, but like Philip I've had problems over the years with the common polyurethane foam, which can break down and damage models. The foam can etch into both paint and plastic as it disintegrates.

I store my wagons wrapped in a layer of bubble wrap and stacked in storage cubes. Bubble wrap is polyethylene and doesn't break down like foam. It's also less likely to catch on and damage small parts. I've never had to buy any, as a lot of stuff arrives wrapped in it.

There is a report on here about bubble wrap attacking paintwork. JMORG reported problems with bubble wrap and Halfords paint. Here's the link to the page.
https://gardenrails.org/forum/viewtopic.php?f=25&t=9751
Ian
Top

Eeek! Although I'm guessing that was a problem with the paint going soft, rather than the bubblewrap itself - if the paint softens I guess anything an item of rolling stock's wrapped in will leave a mark...

Thanks for the info - more thought for thought...

I may investigate cyrogenic technology for the safe storage of rolling stock - I'll keep you posted!

Can you not put up some shelves?

I've already taken over too many of the house's shelves!

I'm trying to get stuff out of the house and into the storage area underneath it, but that's a little dusty and unpleasant, so although it's fully shelved under there (with some real heavy duty stuff that was being ditched at work) the carriages in particular need to be better protected, hence the boxes. Or the cryogenics, depending which option I go for...
Top

Andrew wrote: ↑
Mon Jan 21, 2019 2:13 pm
Eeek! Although I'm guessing that was a problem with the paint going soft, rather than the bubblewrap itself - if the paint softens I guess anything an item of rolling stock's wrapped in will leave a mark...

Thanks for the info - more thought for thought...

I may investigate cyrogenic technology for the safe storage of rolling stock - I'll keep you posted!

I would suspect it is a paint problem. Perhaps I should confess that I store my goods rolling stock (not my locos) wrapped in bubble wrap and haven't experienced any issues. I have used cheap acrylic paint which leads me to conclude it was a paint issue.
Ian
Top

Andrew, stop worrying too much about possible damage to the paint. When you did my wagons the paint was brilliant. The stock is going underneath the house, so long as they are kept dry and no dust or anything of that elk get into the box how can the bubblewrap damage them.

By the way mate here is that train I bought last year and I eventually got the wrapping off, it has been wrapped up again in the bubblewrap it came in... 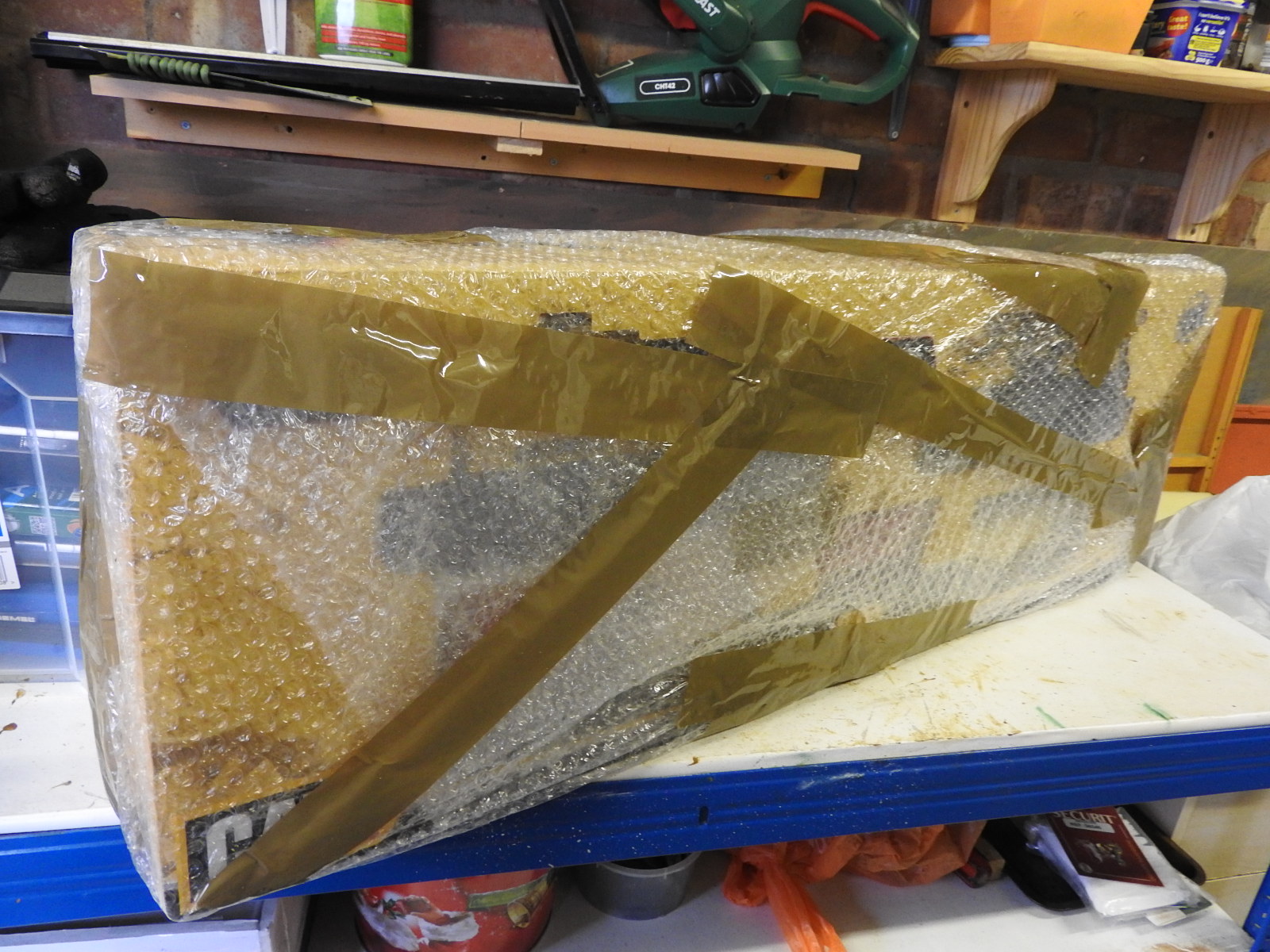 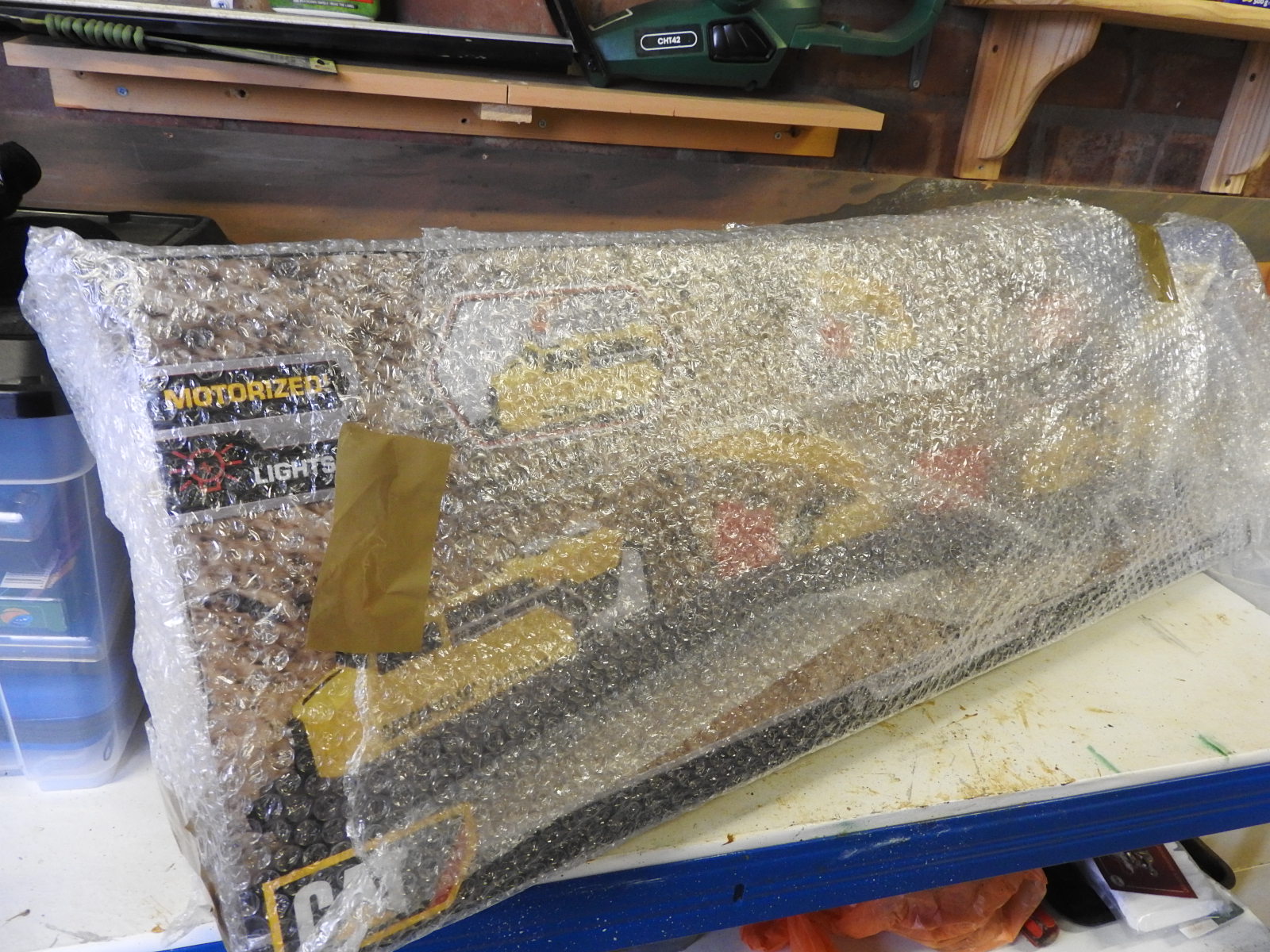 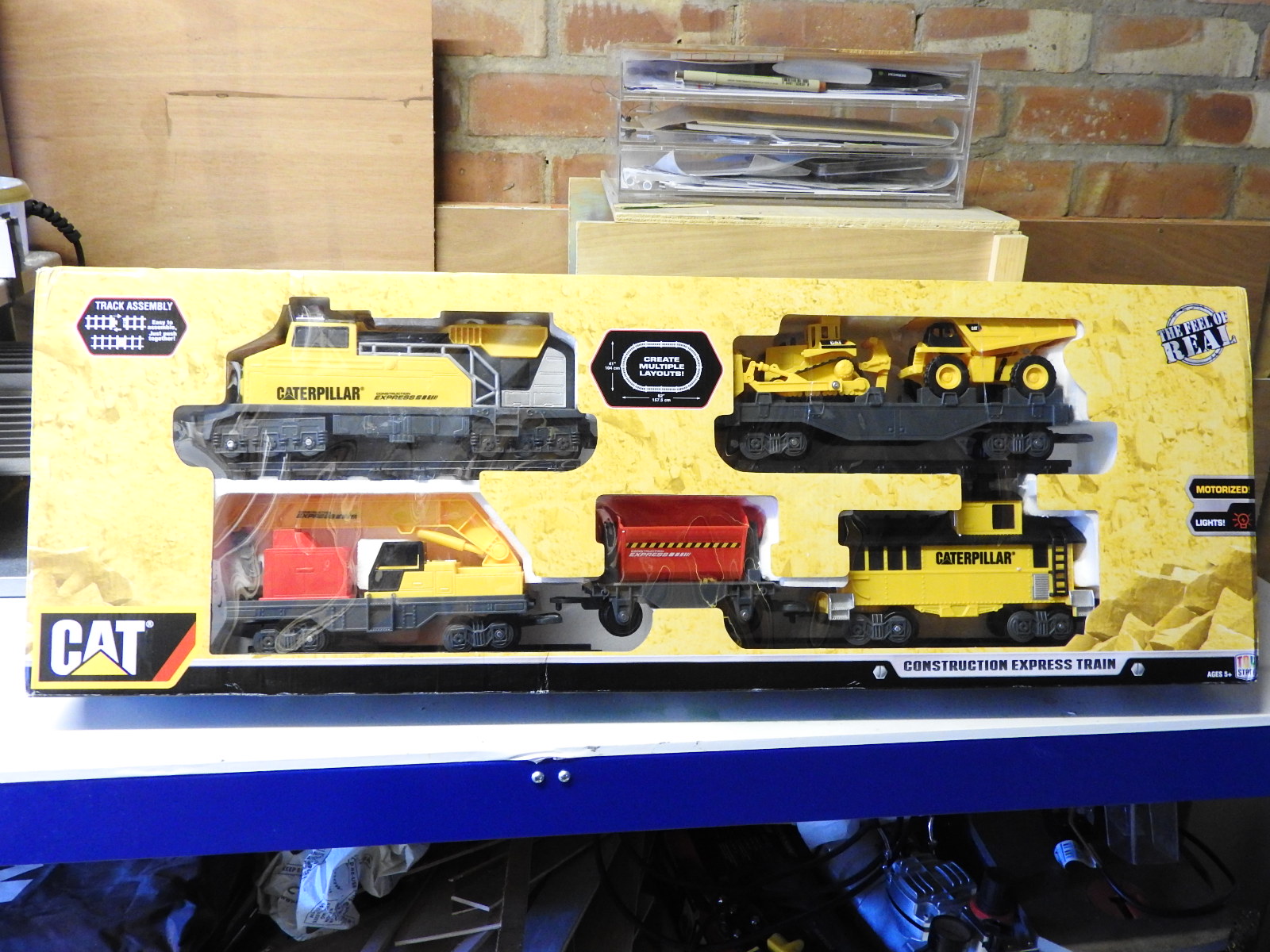 And this is a shelf with a few stock on in the garage. 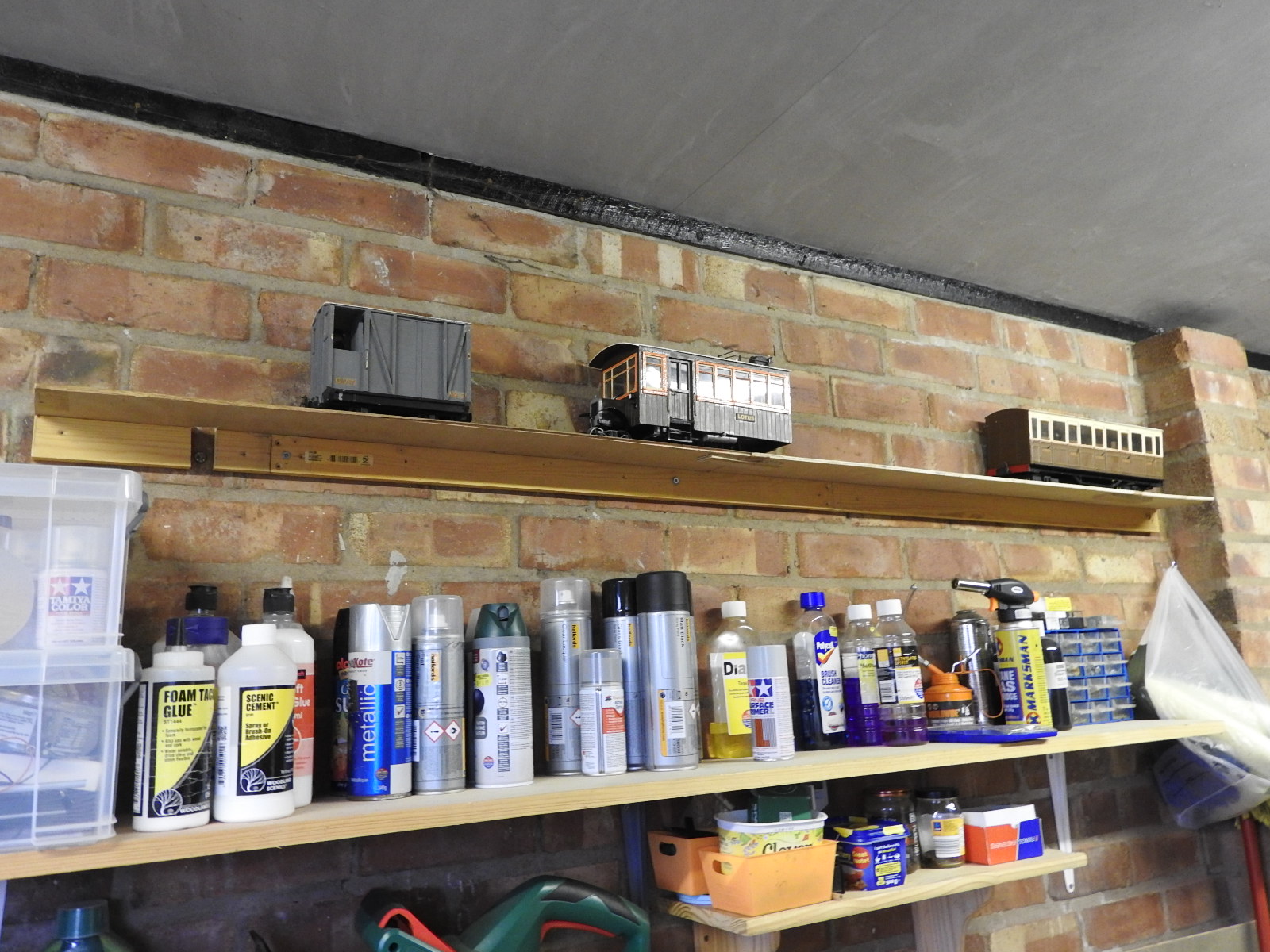 Ah, so that's what was in the box! That's the same type as the one that's providing the power beneath my chocolate factory Sentinel loco...

Andrew wrote: ↑
Mon Jan 21, 2019 2:13 pm
Eeek! Although I'm guessing that was a problem with the paint going soft, rather than the bubblewrap itself -

That's also my opinion, as there is some ropey paint out there nowadays........

Bubble wrap is made from polyethylene and polyethylene film is an archive grade storage material. It doesn't react with much, which is why it is very difficult to get paint to stick to it.

Foam rubber is a different matter, as both natural latex and polyurethane foams are degraded by oxygen if not formulated properly. Keeping it in a dark place doesn't stop the breakdown, as I know to my cost.

I found a little time for some modelling this weekend and so dug the tipper trucks out.The rake has now grown to five, with a converter wagon at each end so that loco's don't need multi-height couplings to pull them. Those had a 5mm chunk of foam board added to the ends of the frames, and all of the wagons received buffing plates (I think you'd call them that?) on the ends to cover the gaps in the frames where the couplings used to emerge. Here are two of the wagons, including one of the converter type, on the right: 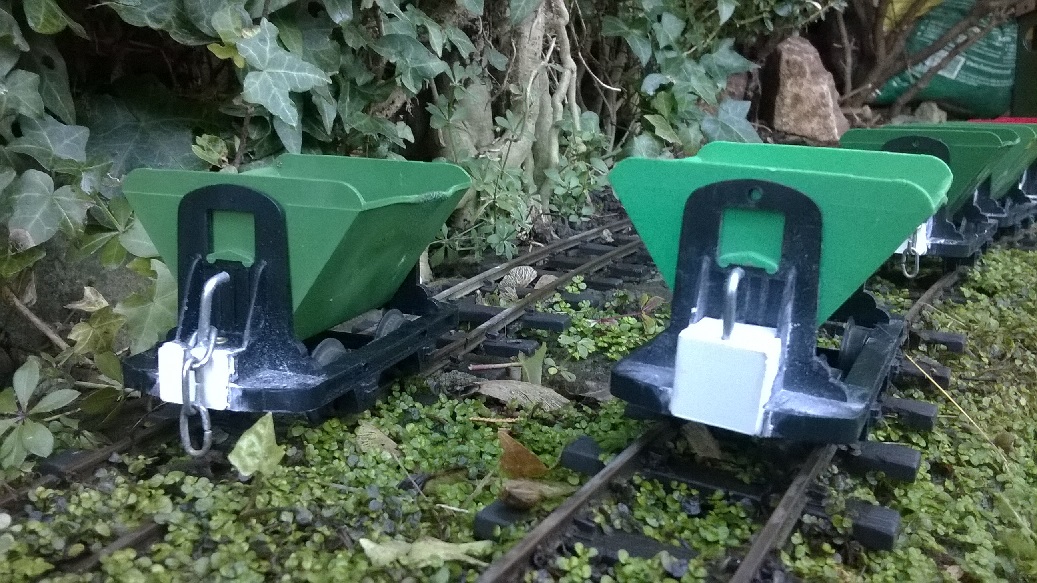 And here's the rake on test: 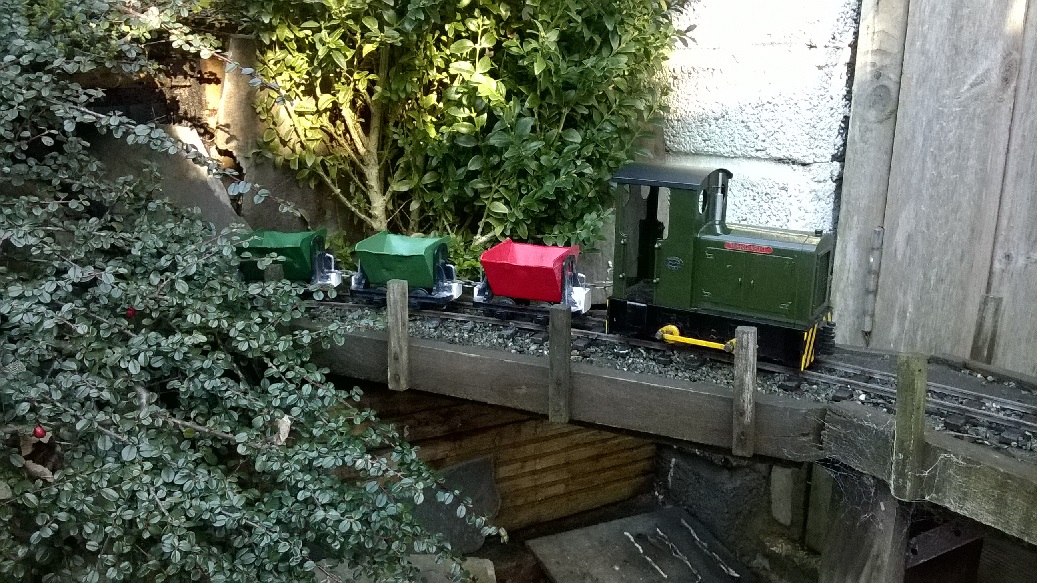 It ran pretty well, except one wagon which was a proper Limping Lulu and kept derailing - the problem turned out to be that the axles had been replaced at some point, rather badly. I was able to swap them for those from another wagon, but I'll have to get another pair at some point.

As you might be able to see in the pictures, I distorted the sides a little by heating them with a candle flame and then pushing and prodding them to imitate damage inflicted by hard use, an idea pinched from Rik's blog, I think. The different vintage skips seem to be made of different plastics, so some were easier to work with than others - results were mixed, but I think they'll be OK once they're painted and rusted. That'll happen once the weather warms up (and I've purchased some iron powder) but in the meantime I'll add some nail gem rivets...

Looking good, Andrew. Your denting of the sides looks a lot more successful than my efforts. I think it depends on the composition of the plastic.

Very good Andrew, I must get round to doing some skips after all the other jobs that need doing...

At the moment I haven't been to good, so they are all on hold....

Apologies, for various reasons it's been yonks since I posted on the Forum, but here I am with a little tipper truck progress.

I'd decided that I wanted to add some "nail art" rivet detail to my wagons before painting them - and that a template would be required to make sure that all the rivets ended up roughly correctly-spaced and more-or-less in a straight line. I must confess that I was very pleased with the solution I came up with - the little strip of perforated metal that holds Peco rail-joiners! Here it is, with a skip marked up and ready to go... 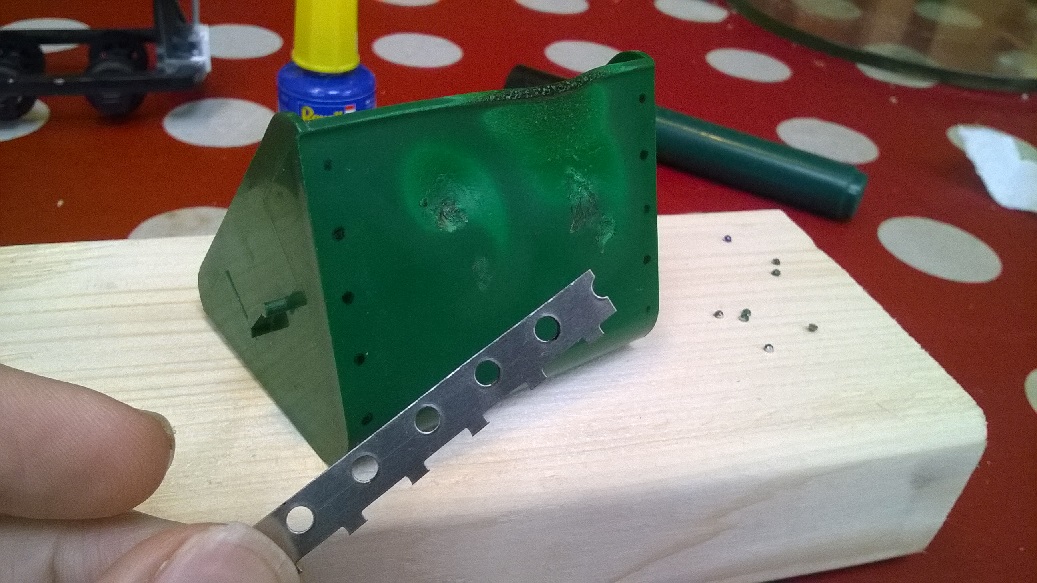 I've now added rivets to all five wagons in the initial rake, which are dismantled ready for painting next time some time off coincides with some relatively good weather. I'm going to attempt to simulate rust using fine iron filings, and I think getting that in the right places in the right amounts is going to be tricky so I definitely want to make sure I've got enough time and space to do the job as well as I can...

Here are the wagons awaiting a visit from the spray can... 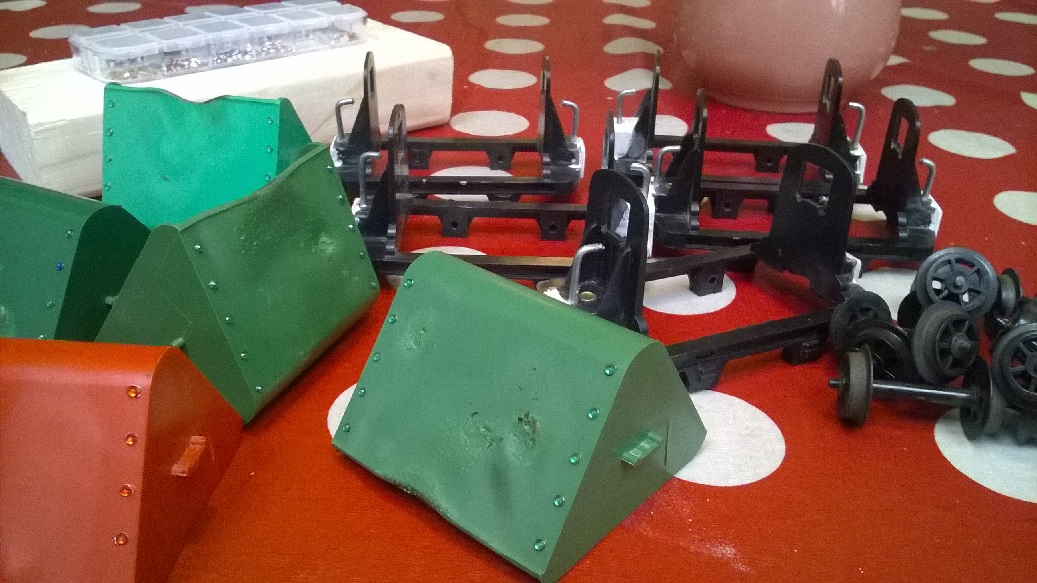 That is an inspired solution to the spacing issue, brilliant!
Philip
www.tinyurl.com/philip-trains
Top

Brilliant idea, I must confess as a serial hoarder I have nearly all those strips in the bottom of my bits box, confident that one day they would find a purpose.
Top