Those of you who have been following the 3D printing thread will know that the process I am going to describe is about finishing off a 3 D printed coach. However it is irrelevant how the coach was built, I use the same process.

So to start off what am I trying to represent in a model for use on a garden railway? 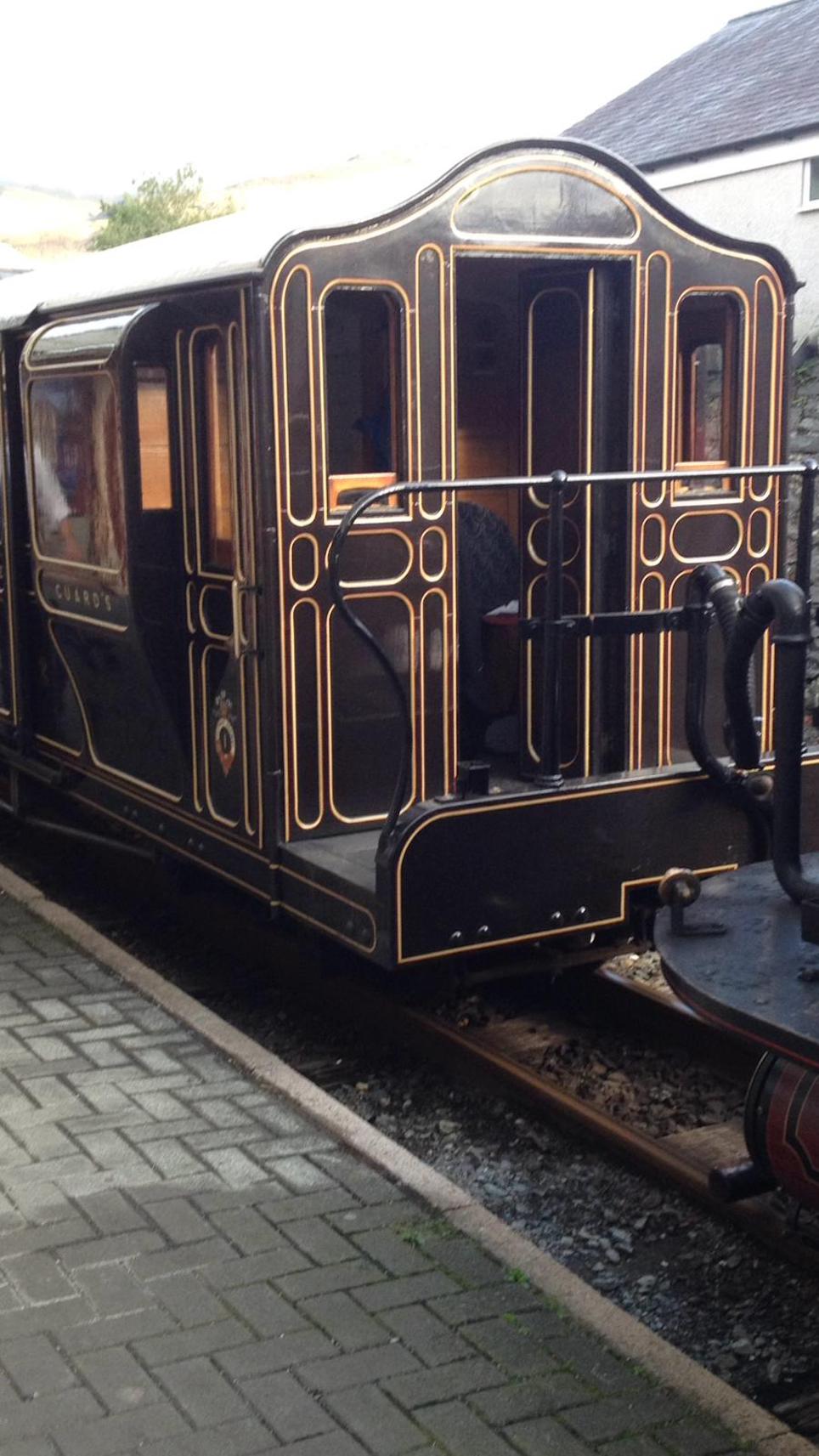 This is the replica curly roofed brake van on the Ffestiniog railway. This is what I want my model coaches to look like!

So to give you an idea of what I end up with, here is a plywood model of one of the Birmingham 4 wheelers which I made some years ago: 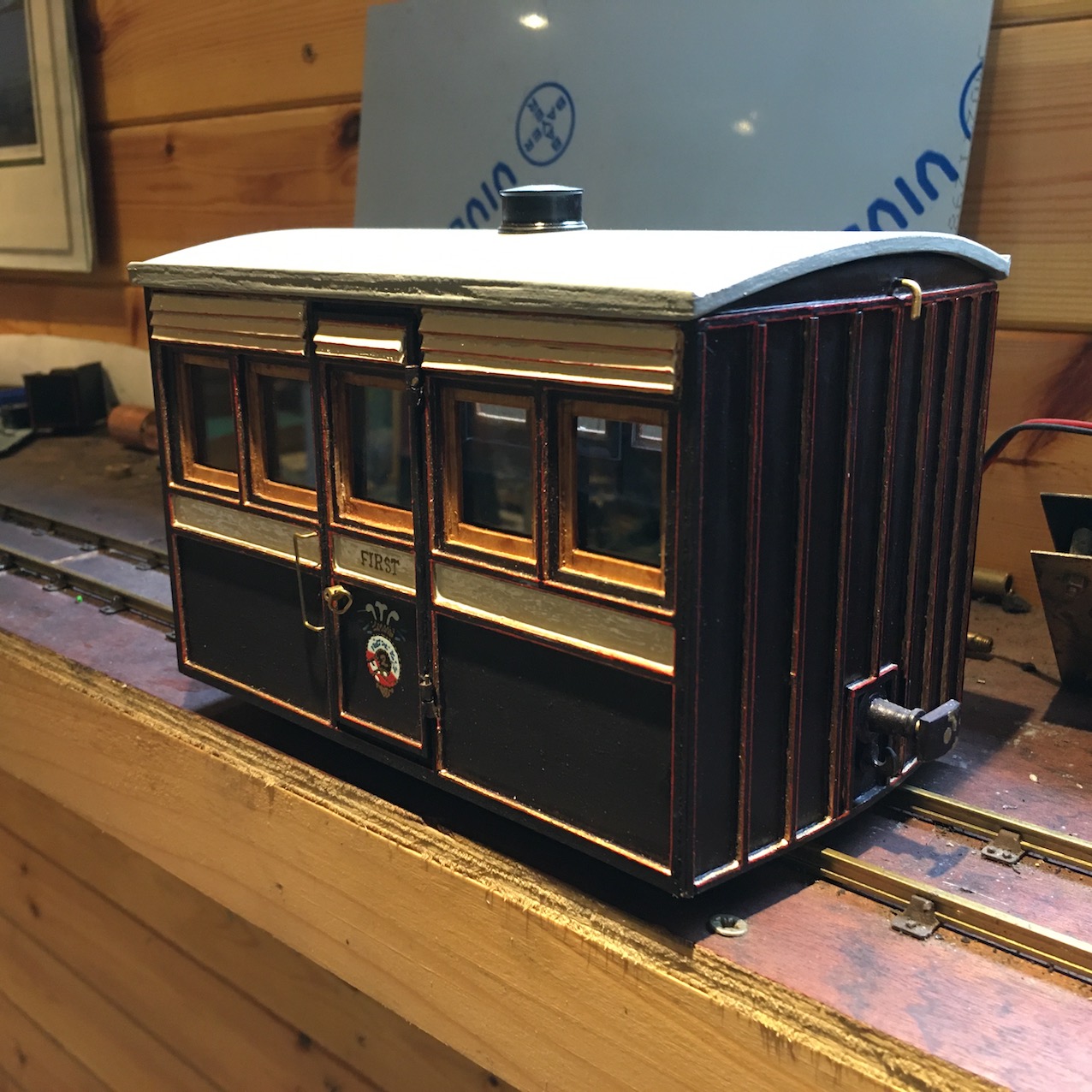 There it is warts and all. You can see it isn't perfect - but its as close as I can get it. The lining is two tone gold and red. The Festiniog crest is hand painted. The class designations are hand painted.

So let me explain how I go about doing this. Not the best way. Not the only way. But it is my way!

Firstly the tools. 45 years ago I used to do this sort of thing with a draftsmans bow pen. It can be done with one of those - but it is easier to get consistent line thicknesses with a purpose made lining pen.

So the first stage was to paint the window frames. For that I used a brush for in the openings and the lining pen held at 90 degrees to the surface for the rest.

On to the lining: 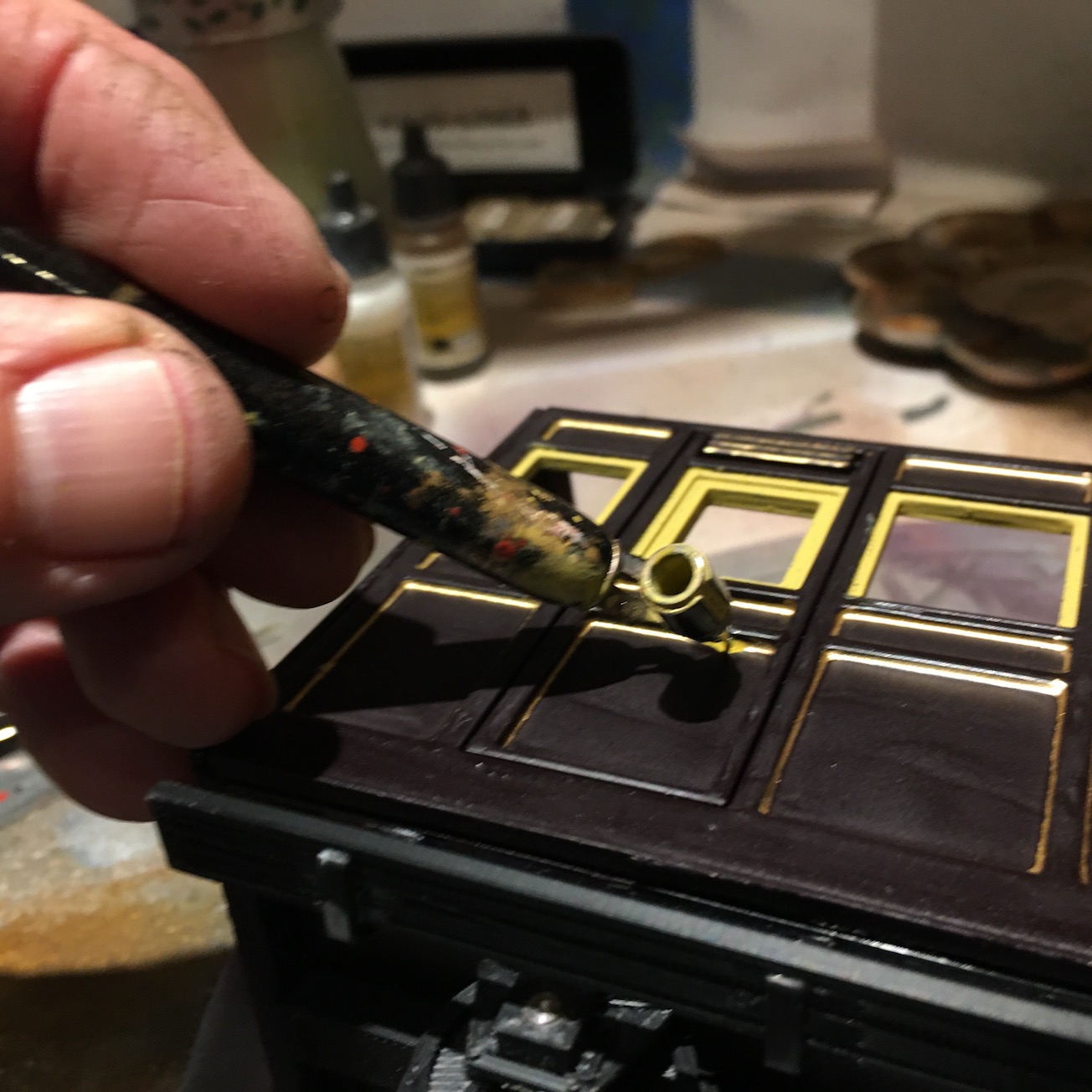 Ignore the pool of thinners coming out of the end of the pen. The purpose of this photo it to show you what a lining pen looks like and the angle I am holding it at for this second stage.

This is what it looks like after the second stage: 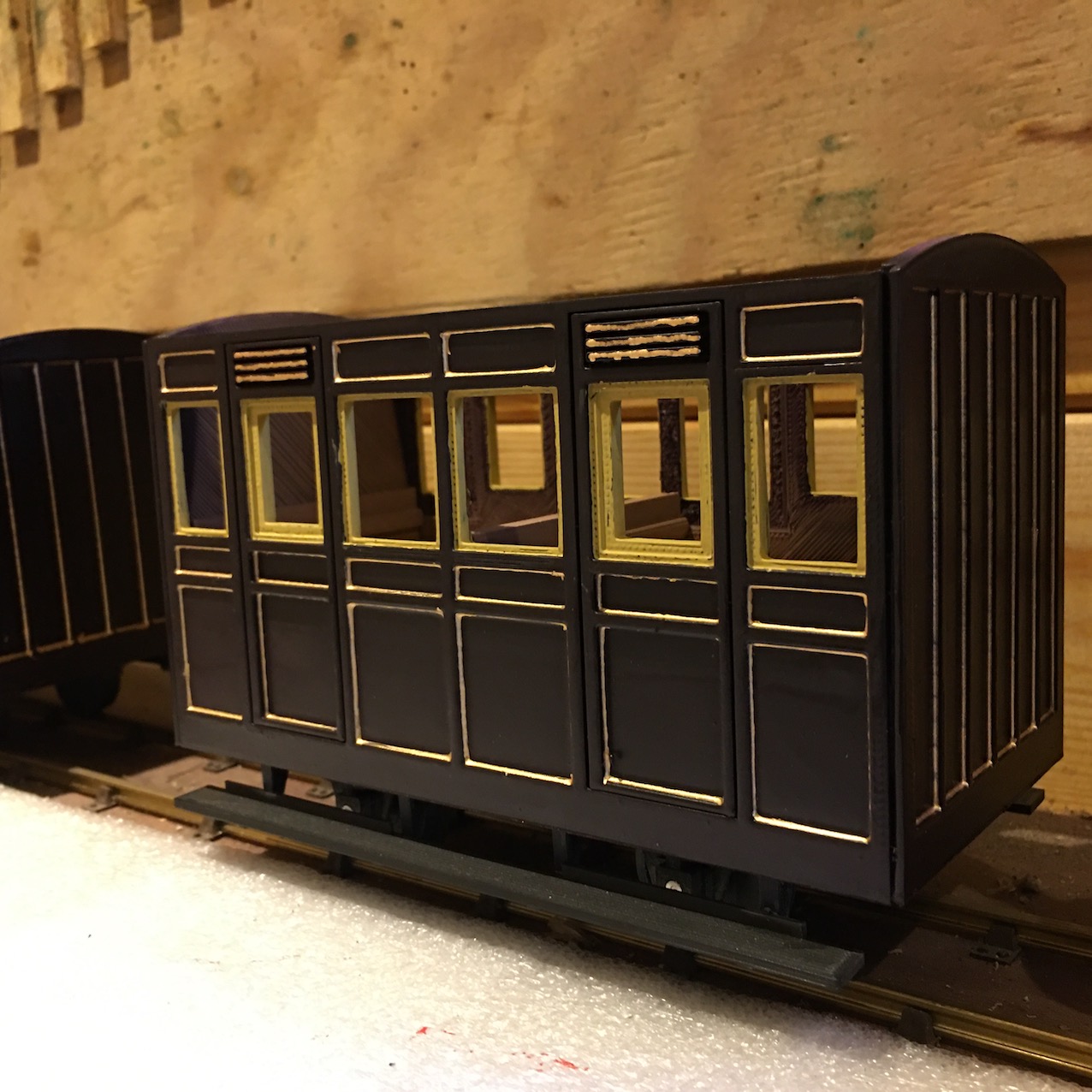 I have used the pen held at the angle shown in the photo to trace around the panels I want to line. It is a bit rough in places but that will get corrected as the process develops. That was fairly easy to do because the place where the paint comes out of was following in the corner between the panel and the framing. In this case gold paint. Freehand. In this case a 0.25mm nib, for thicker framing a 0.5mm nib.

From now on it gets trickier. The thin red line on the outside: 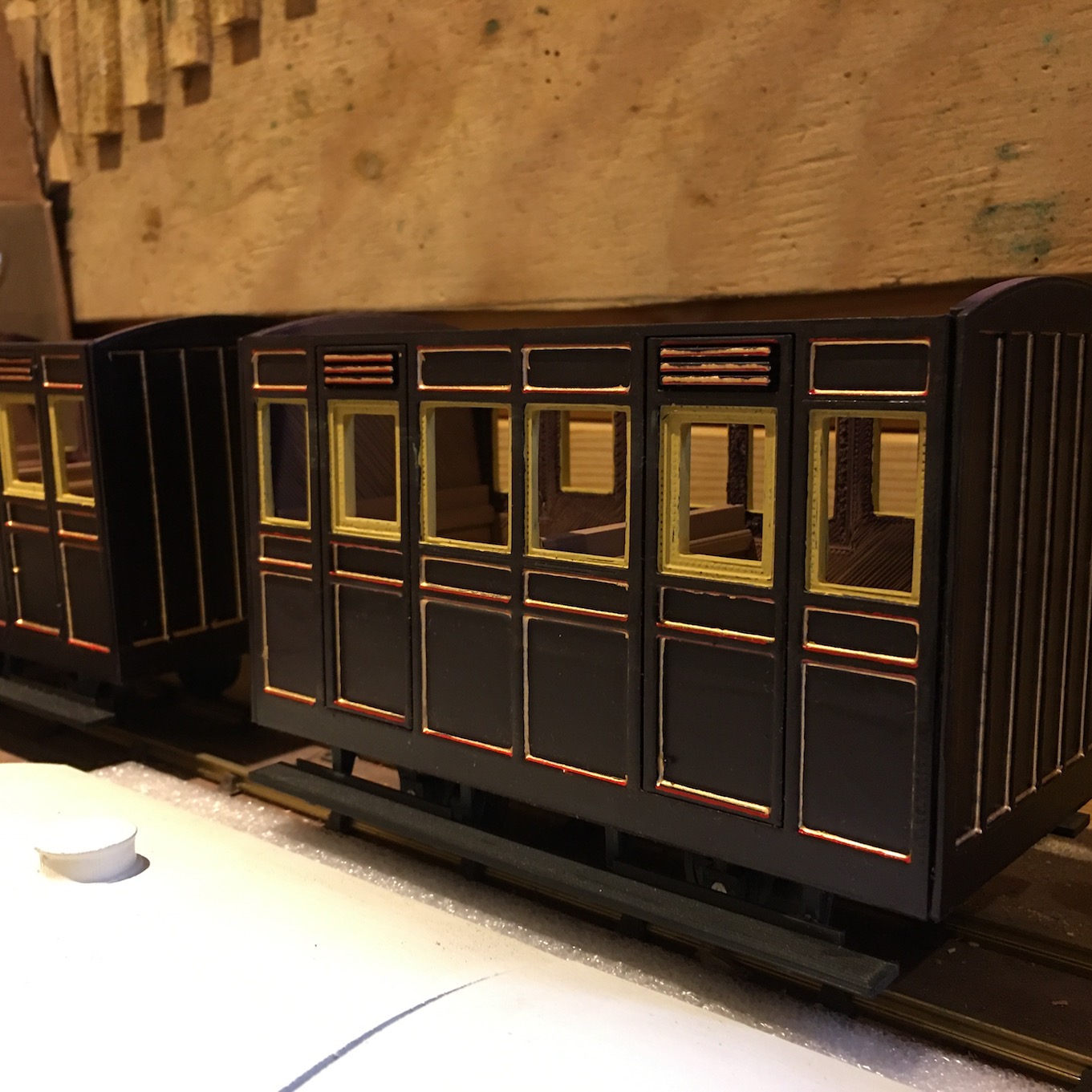 You can see that I have only painted the horizontal lines. Right on the corner of each frame, with the pen at 45 degrees. That was done with a ruler fixed in place with blueback (to stop it slipping). The ruler is important here because this is a final line.

Now to let it alone while the paint dries.

I built a pair of Ashbury 4-wheelers from plywood about 10 years ago and lined them using a similar pen - mine's a Peter Spoerer one. It was bloomin' difficult, the pen nib found every hump and bump in ply and replicated it in the lining.

Mine was a much simpler scheme representing what I believe to be the livery after the ornate Victorian one but before the 20s green, maroon with a single cream line around windows and doors above waist height. You can just about see it in this picture: 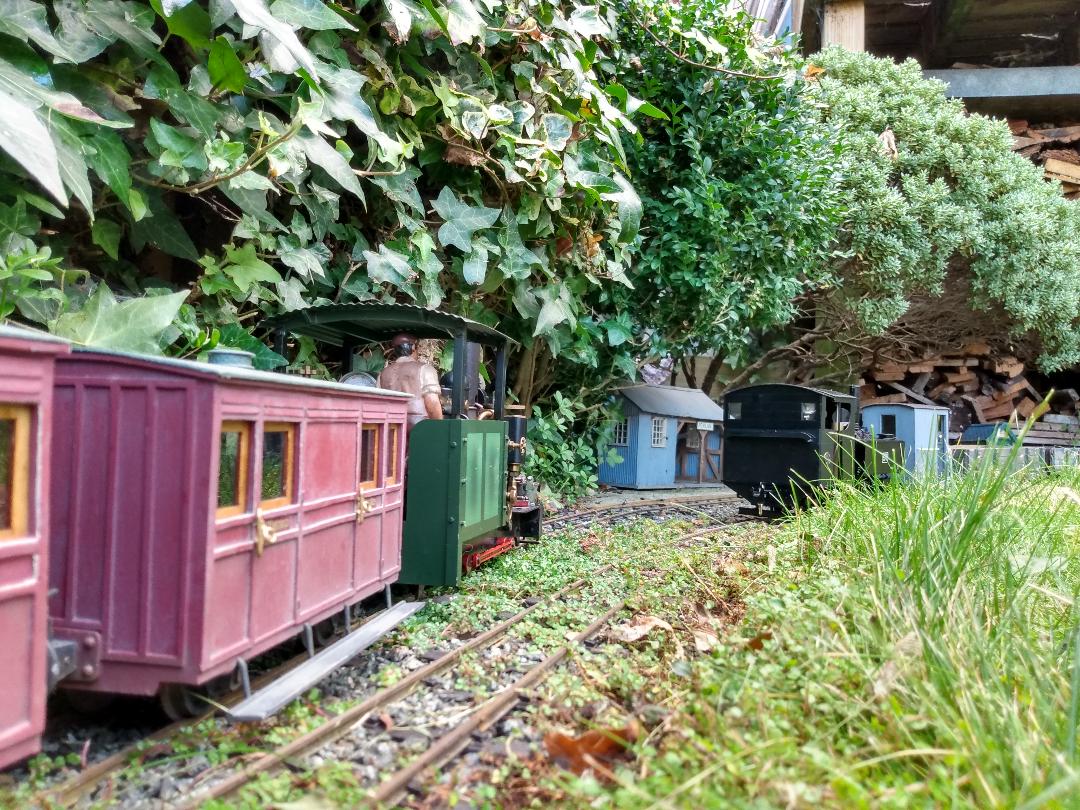 Somewhere on here I recorded my experience of using the same pen to do the much more ornate lining on my Russell, although i think that was actually less challenging in some ways because it's much easier to wipe mistakes off the RH factory finish...

Andrew you have the same pen. The lumps and bumps were a problem for me as well on the plywood bodied coaches I have built. It was also difficult to make each pice of framing square and parallel - so all the lining looked straight in the finished coach.

The 3 D printed coach has so far been an advantage in that way - the lining is following the profile easily. and all the lines are parallel.

I would like to claim that it is all skill and ability, but I think it is actually more about technique and tricks. That is why I am writing this. To share the tricks.

So to the next stage: 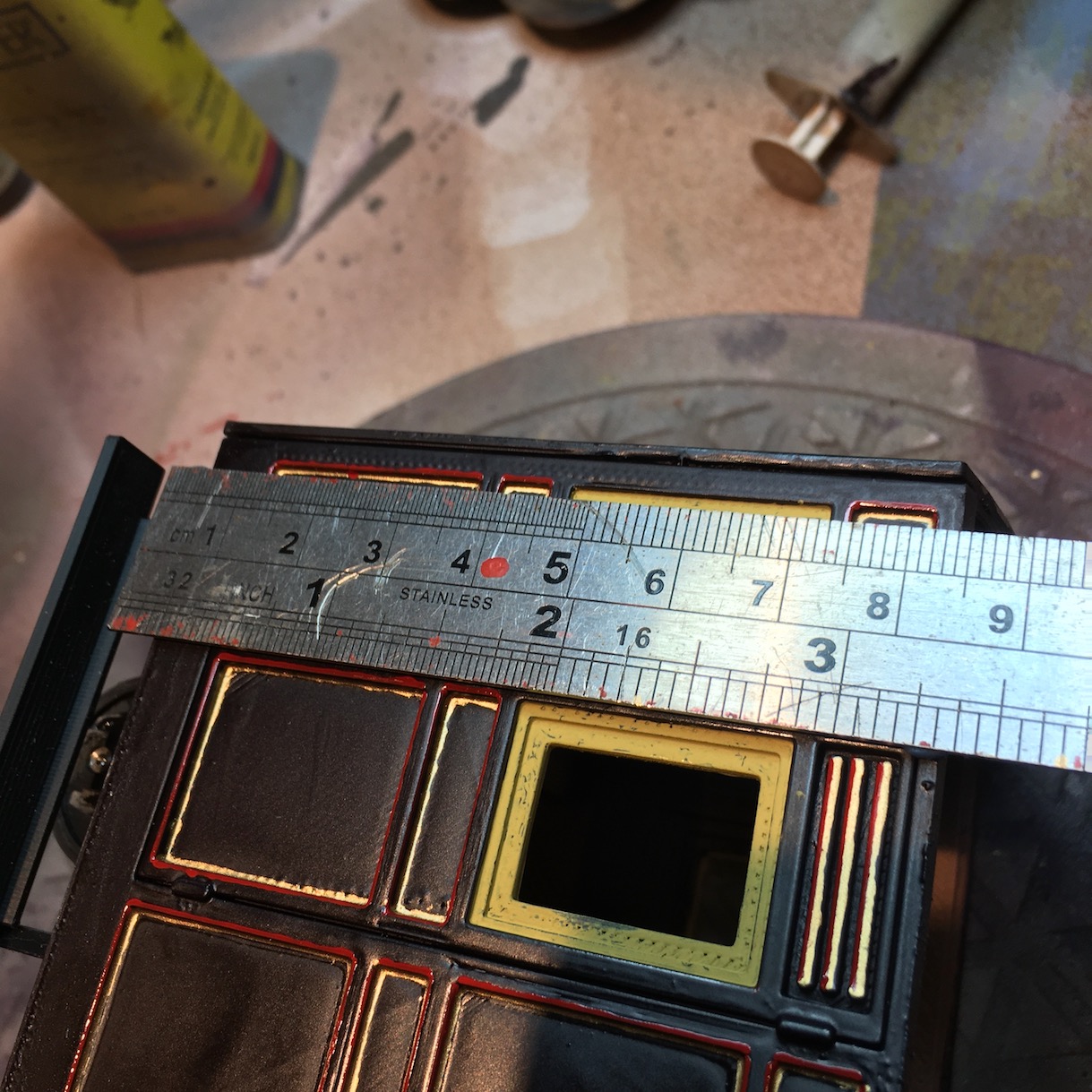 I just wanted to show how far away from the line I place the ruler, for this. So I paint all of the left hand edges, turn the coach around and paint all of the right hand edges. The other thing to remember is to rest the hand ONLY on the ruler and not the bit you have just painted. I made that error a few minutes ago!

If you make a mess just wipe it off with lighter fuel soaked into a bit of kitchen roll.

So the red is on the verticals and the horizontals. And you can see a few errors! 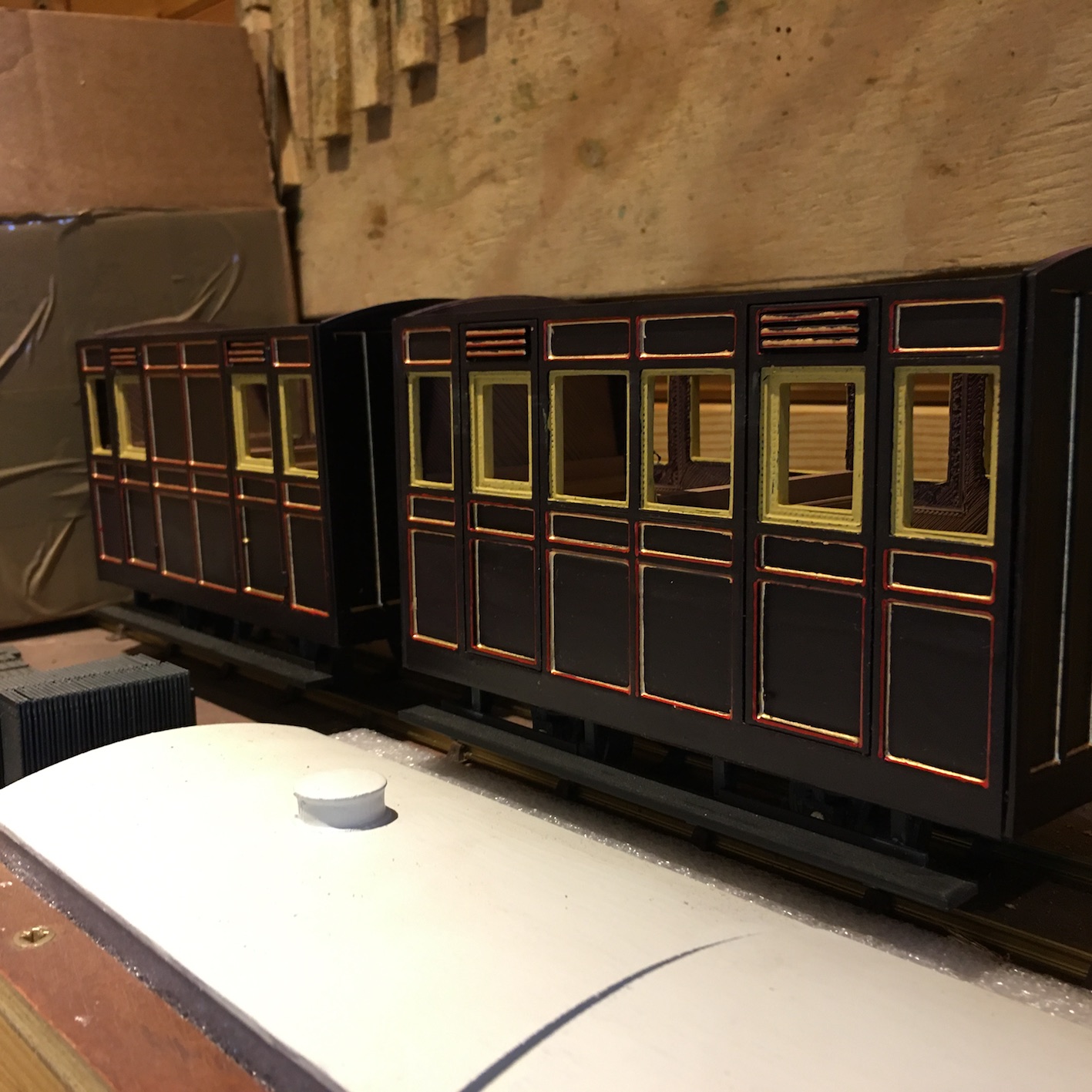 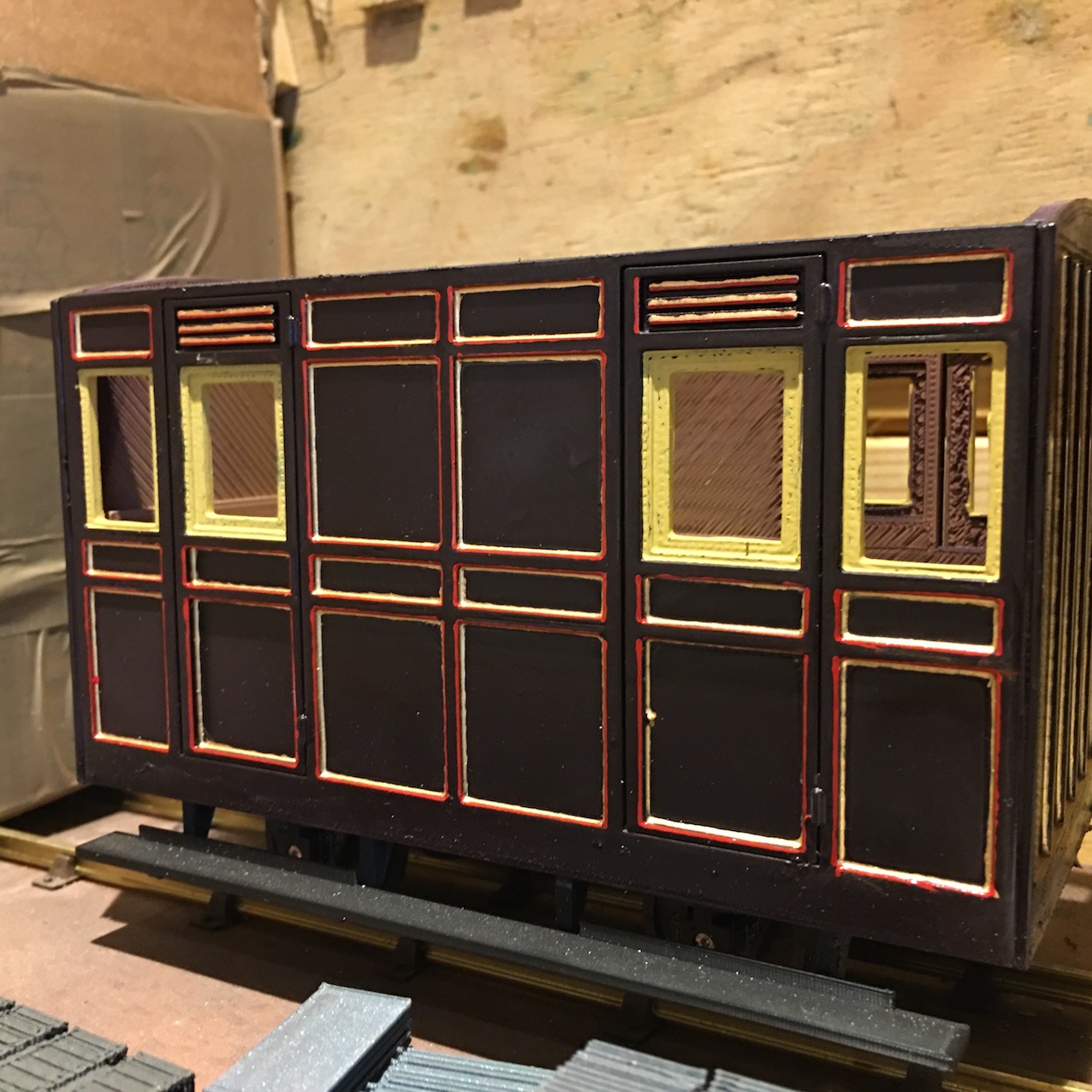 So it needs to dry again before correcting the errors.

That's so impressive, Trevor. You can stop holding your breath now ......

So the final stage!

I have gone over all the rough edges - anywhere where I have got gold paint where it shouldn't be with the plum base colour in the lining pen. Look particularly at the ventilators over the doors. the top edges of the gold were rough: 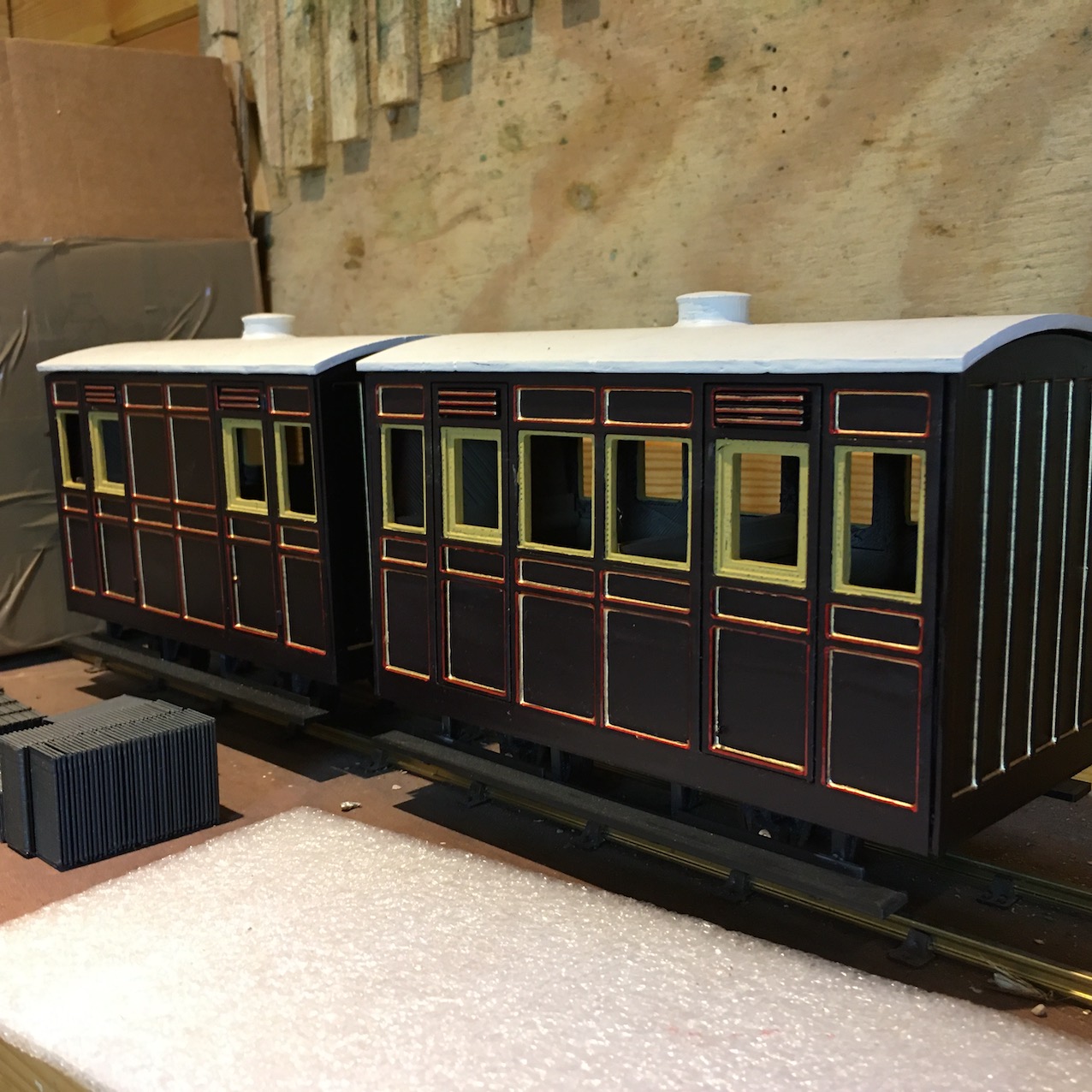 If necessary it is always possible to go over the lining with the base colour and start again.

And to finish this off a couple of views of a scratch built model of coach 15 built from plywood: 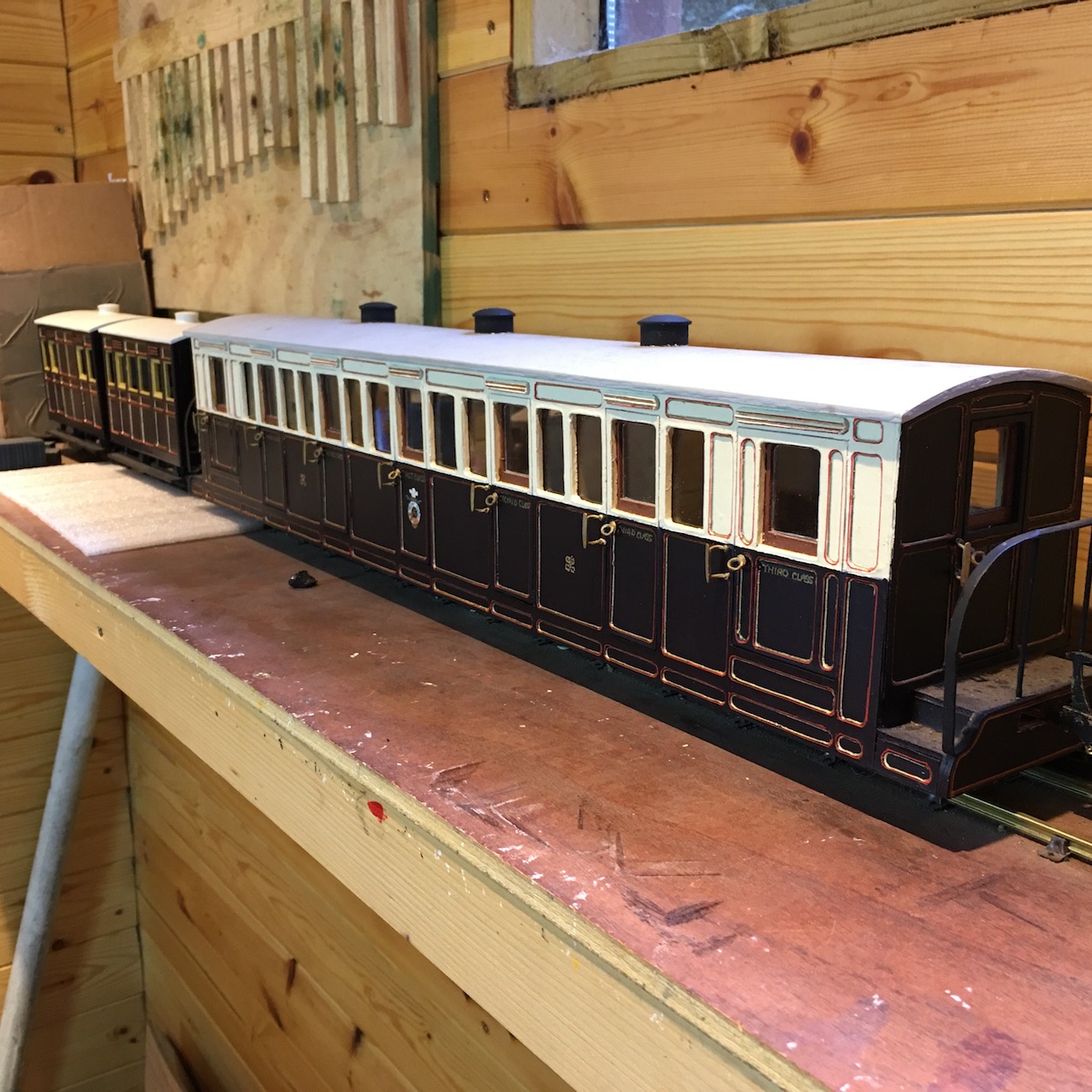 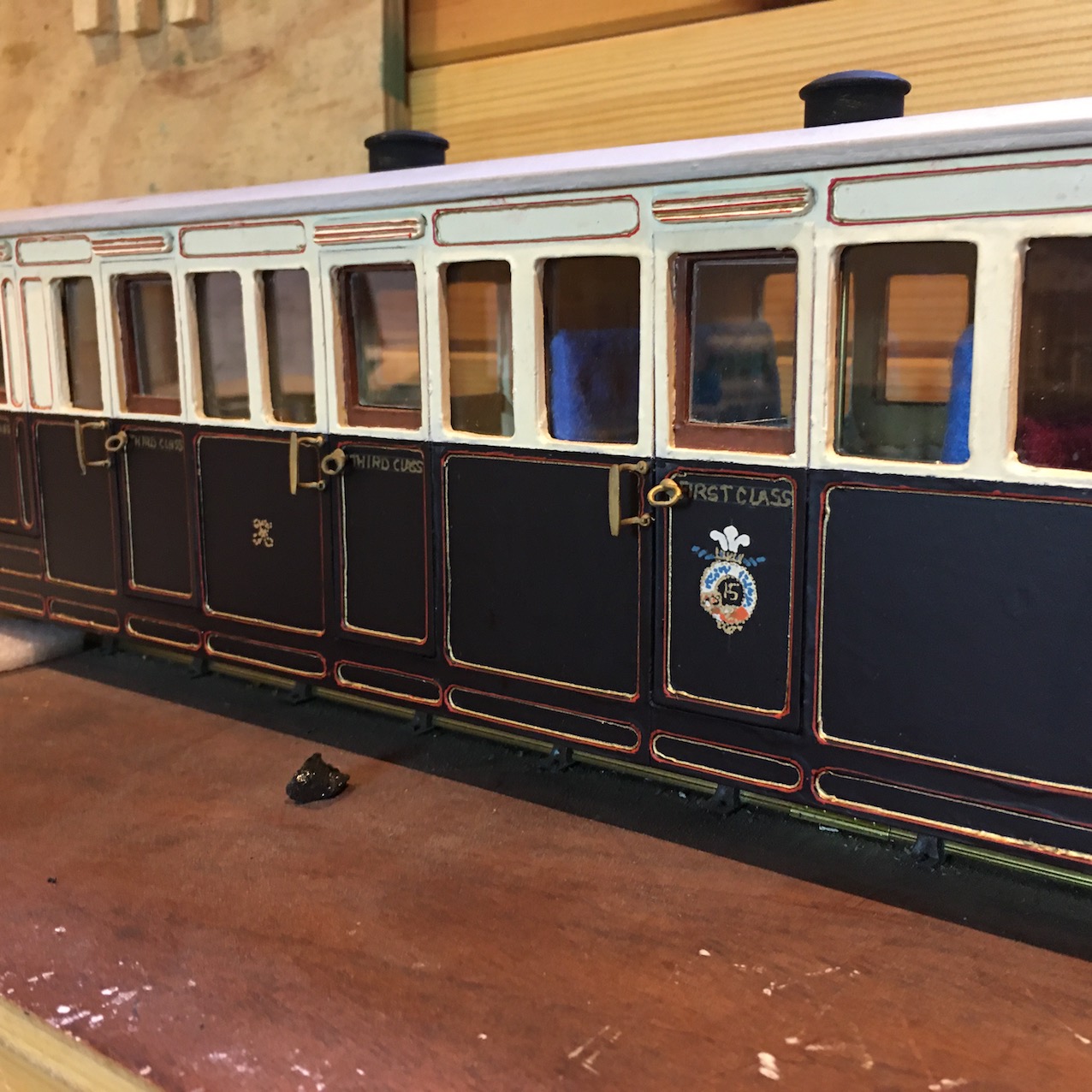 My hand drawn lettering isn't that good - but from a few feet away you can't see! It also illustrates the difficulty in getting all the edges straight and bump free when gluing ply or veneer on to make the external framing. The quality of the lining on coach 15 is limited by the quality of the underlying substrate. I think that the lining on the Ashburies is much crisper - and that is down to the smoothness and the lump free nature of the underlying substrate.

That brings me back to 3 D printing - which is what started this. I have coach 16 partly drawn - but it will be a while before that gets printed!