I snapped up this loco recently from SRS, it was posted on their site one morning and I had bought it before lunch time:

As it says in the description on the SRS site, a 'Metre Maid' is the 0-6-0 variant of 'Sweet Pea' which is probably the most popular model loco ever designed in 5" gauge.

Once the loco is delivered I will decide if I will keep her as a 'Metre Maid' (not sure about the tender yet) or scale her up to a larger narrow gauge looking loco (more like a Sweet Pea but an 0-6-0 variant like the below loco which was sold a while back from SRS):

Here is a short video I found on YouTube of a 'Metre Maid' to give you an idea of what a finished loco in steam looks and runs like although my one is built with Hackworth valve gear:

I plan to document here her time with me if it is of interest.
YouTube Channel
Top

Congratulations, that's a very nice loco. I'm sure you will get a lot of enjoyment out of that.
Top

Wow that looks amazing. I'm sure you will have a great time with it. Please document what you do. I don't think I could get an 0-6-0 on my 9 ft radius curves

Given the quality of workmanship and the price paid (cost less than most 16mm scale coal fired and even gas fired locos now) I am quite chuffed despite it not being quite what I wanted appearance wise (but it can be made to look narrow gauge like a Sweet Pea as the parts are interchangeable).

Blackgates Engineering do all the bits I need which has made me realise you don't have to be a skilled machinist with a fully kitted workshop to get along in the world of larger ride on railways:

Hmmm. They do a 0-4-0 Sweet Pea as well, and there is one (I think) on ebay. Mustn't be tempted...
Dave Miller
currently building the 5" gauge Circle Line
Top

I would not want to take the risk in this scale buying a loco off eBay.

Most of the locos up for auction don't state they have a valid steam and hydraulic test or the locos steam test is about to expire (which means it will fail the steam test hence why they are selling it).

If you are serious about buying a loco then I would keep an eye on the SRS website as they don't sell crap, they offer a 14 day return policy and their prices are fair compared to other suppliers and even private sellers.

My loco should be arriving tomorrow!
YouTube Channel
Top

Thanks for the advice. I wasn't serious about the eBay purchase. If I ever did get into live steam I probably wouldn't start at 5" gauge!
Dave Miller
currently building the 5" gauge Circle Line
Top 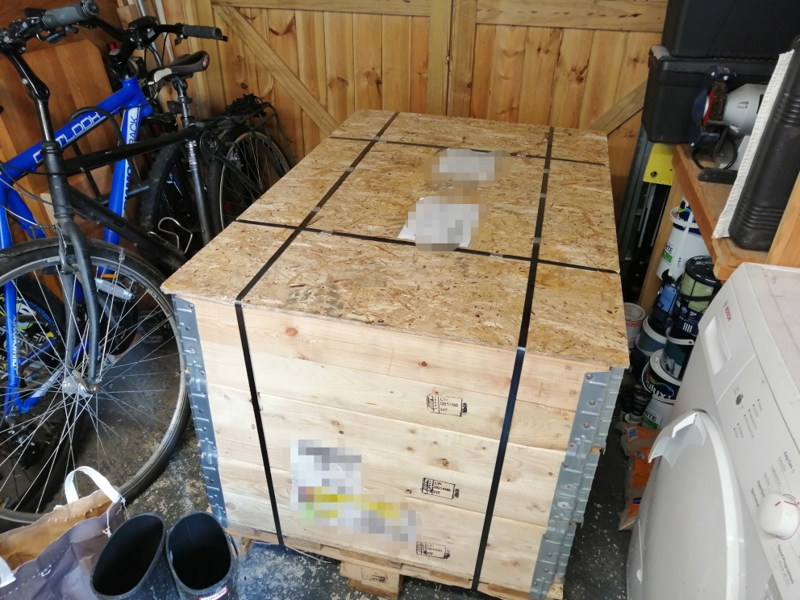 Well if nothing else it is well packed!

Before I started work on the loco I had to get my workshop sorted out which has taken time and I have had to push myself to get rid of wood, tools and items that maybe one day would be useful but have never been used. This has created a more open space and I feel better now working in there than I have done previously.

Roly supervising clean up work and then falling asleep as per cat protocol: 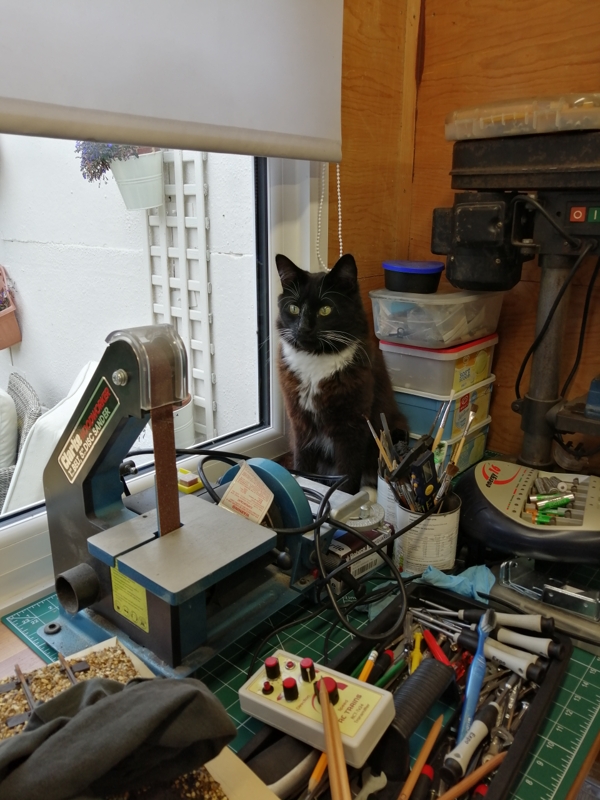 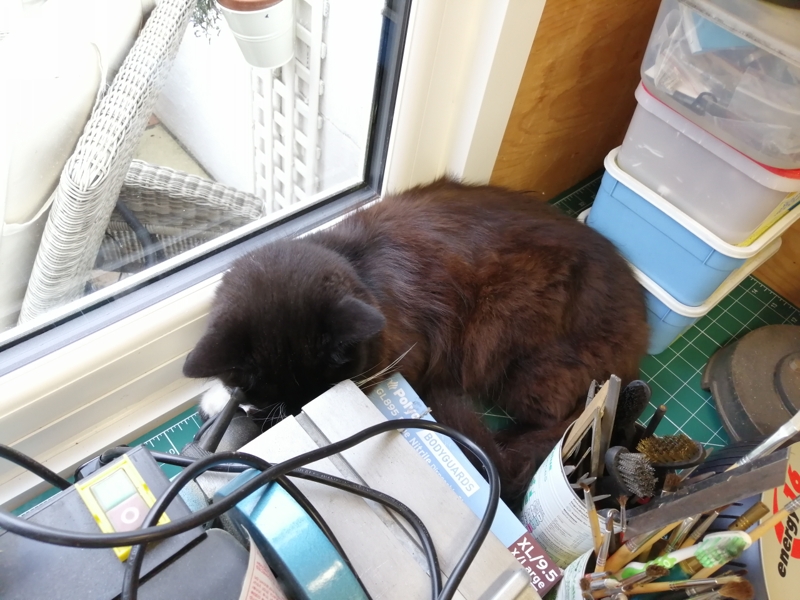 Due to the size and weight of the loco I was never going to be able to lift it and store it away on my own each time I wanted to tinker so I treated myself to a hydraulic lifting trolley (picture was taken during workshop reorganisation!): 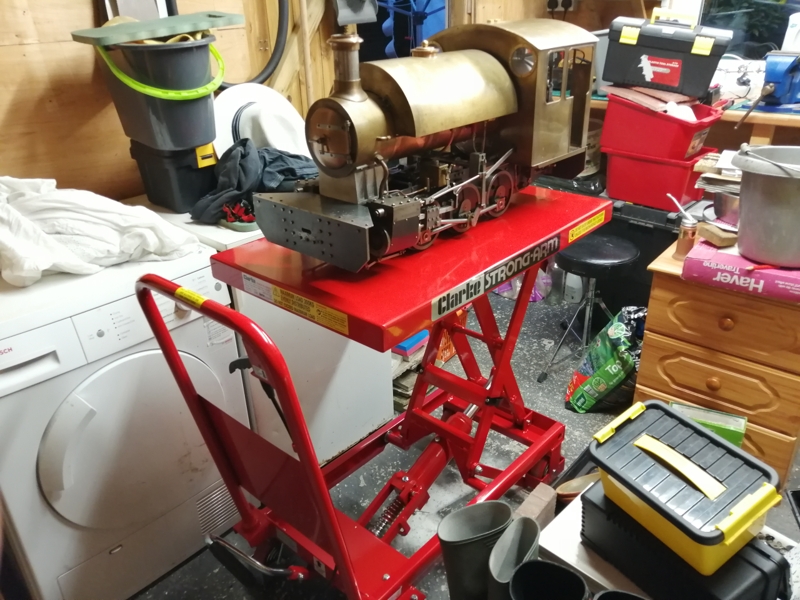 It wasn't cheap, however, it's a well made sturdy piece of kit and as it is rated to lift up to 300kg I can use it with larger and heavier locos in the future

The loco has been sitting for some time in the builder’s workshop (it's never been fired, however, it was sold with a new hydraulic test certificate so the boiler is sound) hence why the wheels on the driving axle were very difficult to rotate on first inspection. I removed the con rods from the pistons and found the chassis ran forwards and backwards freely so turned my attention to the cylinders.

The pistons were very hard to move backwards and forwards so with the cylinder covers removed I poured in generous amounts of light machine oil to help get things moving. After a good soak and repetitive movement they started to free up slightly but what is really required is hours of running on air as the cylinders and running gear have not had time yet to bed in.

I took the plunge and bought a new 2.5HP air compressor that can run at 9.5 CFM (Cubic feet per minute, I didn't know what it meant until I started researching compressors). It has a 25 litre tank so should be more than adequate for my needs plus it was supplied with a range of accessories for painting, air blasting, etc.

So, how to get her running on air? Each cylinder steam feed is silver soldered to the steam header so I couldn't connect the air line to the cylinders unless I invested in additional pipework to feed each cylinder individually.

I tried pumping air into the boiler via one of the clack valves, however, as you can see in the below video you cannot pump sufficient air into such small inlet to maintain pressure but at least she moved for the first time so it was quite exciting for me and I think the whistle sounds great!


I am fortunate to know a colleague who is always a WhatsApp message away with model engineering queries and after asking him what I should do he suggested that an adapter could be made to fit into one of the safety valve threads where a larger air line could be fitted. As he has one complete and a second in progress 'Sweet Pea' variant of this loco he already knew the size of the thread required for the adapter so he machined one up and it arrived in the post the next day: 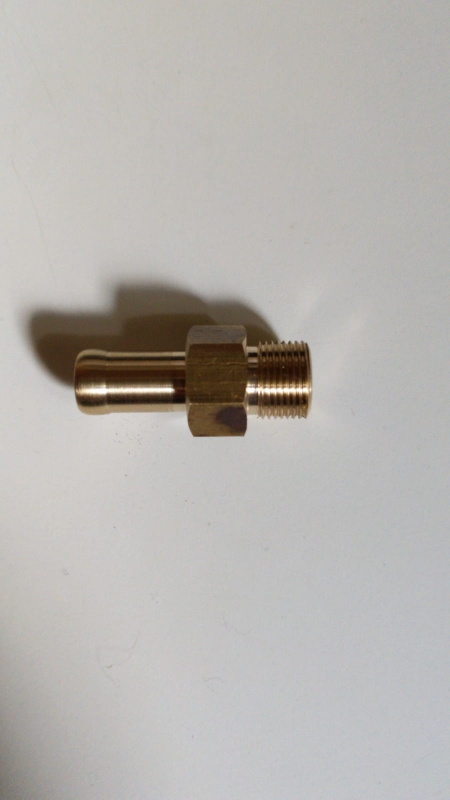 I have a flexible 'whip hose' on order (again, didn't know what one of these were until I researched it!) so one end will connect to the adapter and the other to my airline as it is considered unsafe to have a fixed connection.

The cab on my loco is built to a high standard with neat soldering, however, it is far too squat for my liking and made removing one of the safety valves for the air line adapter impossible as you can see (you can't get a spanner in there!) 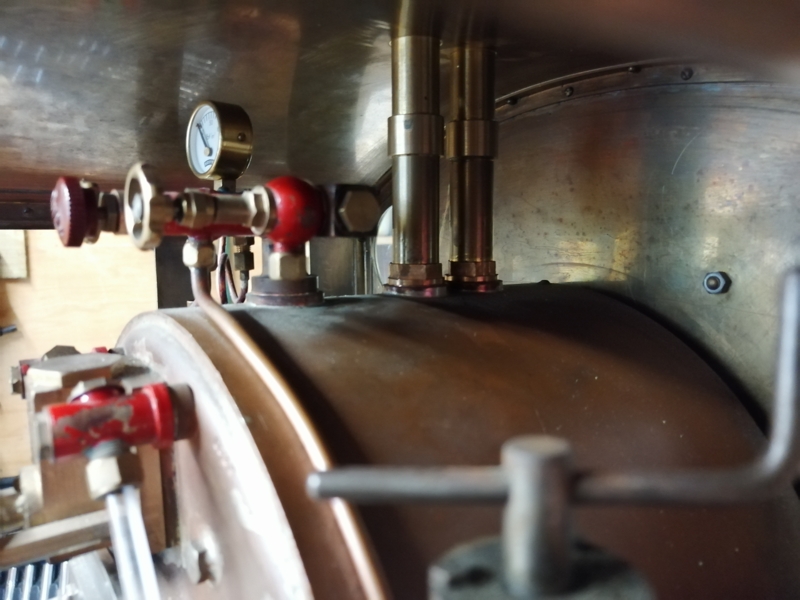 After much swearing and having to remove both the drain cock rod, reverser rod and blower pipe I managed to remove the cab (not like taking a Roundhouse cab off, a few bolts to remove and job done) and fit the air line adapter: 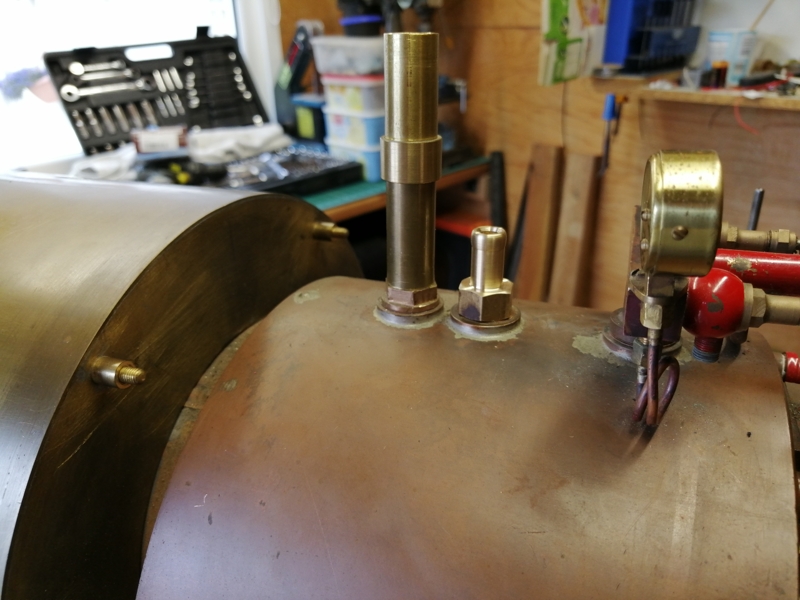 And so that takes us up to today where for the first time after nearing workshop reorganisation I had enough space to wheel the loco into the garden to take this photo with my Roundhouse Silver Lady so you get an idea of the size of her (I quite like the idea of having her without a cab at the moment, almost a 0-6-0 Quarry Hunslet Bagnall style monster creation!): 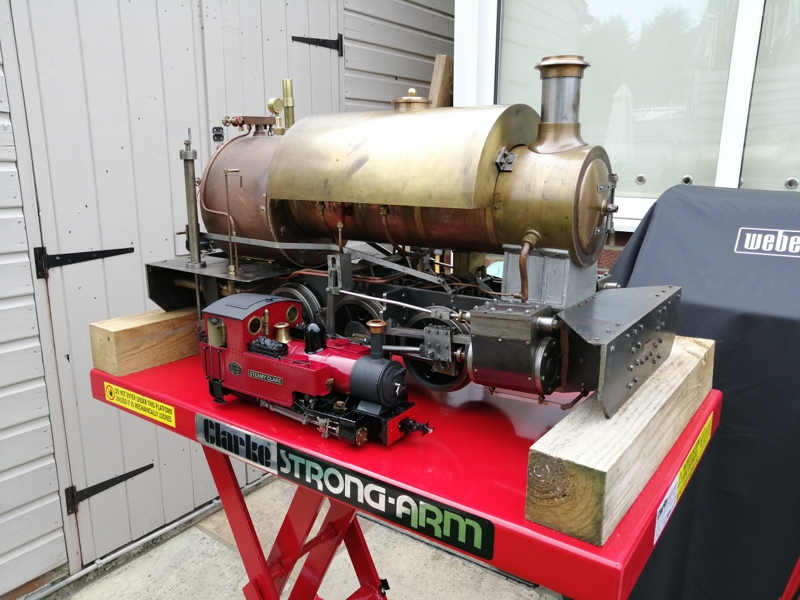 The chimney is too small so that will be replaced with a taller one (I received the workshop manual this weekend for the loco with all the drawings for parts that I want produced or replaced). I suspect I will fit a cab eventually.

If you have read this far you must of found it interesting! 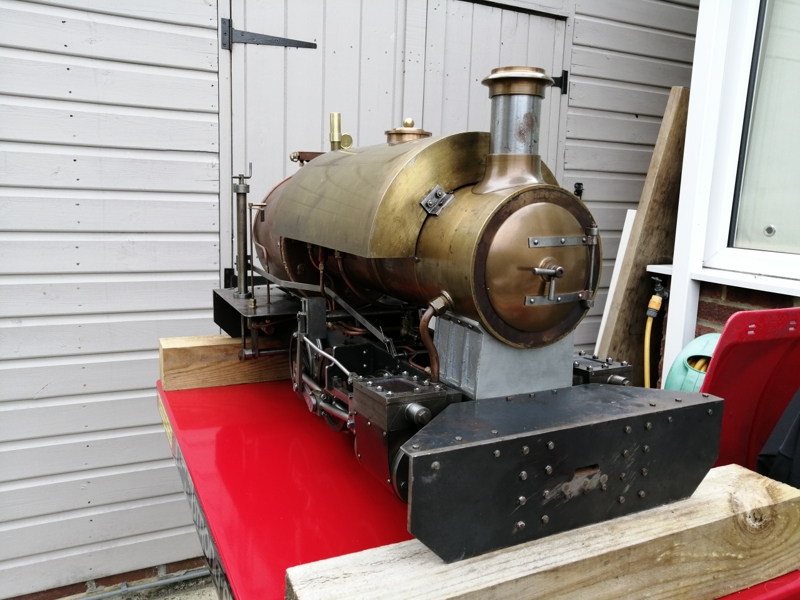 Very nice! A taller chimney and a Hunslet style open cab would look good on it.
Top

Very interesting Tom. It sounds like you are learning a lot on the go.

It looks very well made.

Second attempt on air was successful now that I have an adapter fitted in place of one of the safety valves allowing better flow rate into the boiler:

The new rolling road units from CMD Engineering are brilliant: