It's been a looooong time coming! I started this back last September and it's been a labour of love, bordering on hate at times. I've had to back track on one major element and it still needs a little tweaking, but basically, Maurice Mower, 4th Lord Elderbury now has a home that befits his station.

Please bare with me on the quality of the following, but I think you'll get the idea, and please watch to the end.

That is seriously showing off..... but so well done.
I would never have thought of such a thing, has it been done before?
The best things in life are free.... so why am I doing this?
Top

Philip, what can I say. The truth is I'm speachless - but if I could find words they would all be extremely complimentary.

Well I'm still speechless, "watch it till the end" did several times. I guess this is the next step for someone who builds an opening door on a loo !! Well done Philip, that takes the cake for the most creative build for a garden railway.
Grant.
PS not being familiar with such things, what is the machine and what does it do please?
PPS I like it that Lord Elderbury stays staunchly glued to his station through any situation!
Top

Thanks for the kind comments chaps. I thought might be better to do a 'How I dunnit' in reverse so to speak, so you can see the final result first. However to answer Grant's question first, the machine is a robot lawn mower. There is a wire running round the lawn area to be mowed and the machine just runs in a straight line until it detects the wire then it turns away in a random direction until it gets to a boundary again, and repeats. I currently have it set to do 1hr 15min mowing on 3 days a week and that seems to be enough to keep the grass ( and moss and weeds) to a nice even appearance.

It all started at the end of last summer when a friend half jokingly suggested I should get a robot mower because I was moaning about having to mow the grass. After some investigation I bit the bullet in an attempt to avoid wasting 2-3 hours a week mowing the lawns. Most of the manufacturers, (Flymo, etc) are actually owned by Husqvarna and are basically the same and after returning 2 which didn't work, I gave up and tried a German machine by Worx. The Husqvarna type dock nose on to recharge and, in answer to Peter, there are many garage designs for them on YouTube, all with mechanically operated up and over doors. The Worx have charging 'prongs' on the RH side and require access on 3 sides, which gave me a problem with opening protective doors. The only other ones I've come across are basically strip curtains, but being so prominent in the garden I wanted something more aesthetic. That meant that I would require a strong, but light as possible, cantilevered framework. I spent a long time drawing and redrawing this and came up with a plan constructed from 50x20 Aluminium tube legs set in a concrete base, with a 60x20 aluminium angle frame rivetted to it. 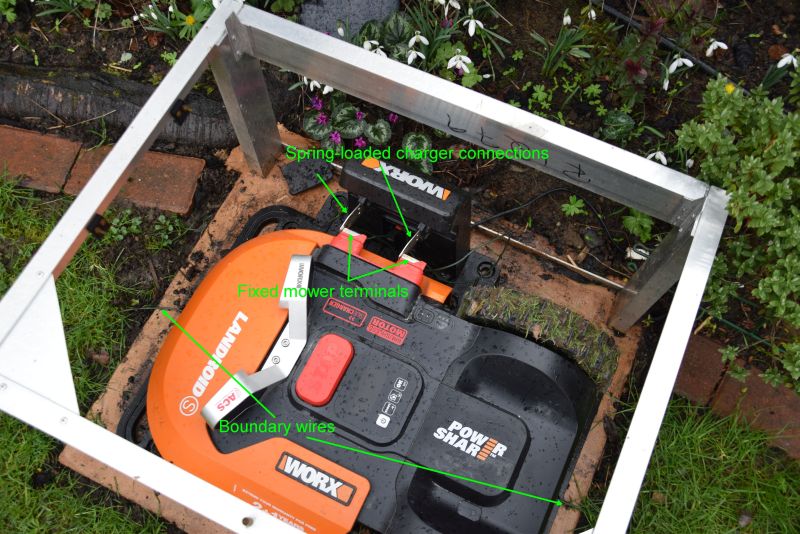 I had found a picture of a two storey manor house which I thought would fill the bill and designed the frame to fit it and started construction. Then, just before I started work on the cladding, whilst watching an old episode of the Beebs "The Coroner" I spotted the building which is used as their courthouse and which was exactly what I wanted. A bit of digging unearthed the identity of the building as "The Mansion" in Totnes, Devon.
https://www.google.com/maps/@50.431141, ... 312!8i6656
and this forms the basis of my building. 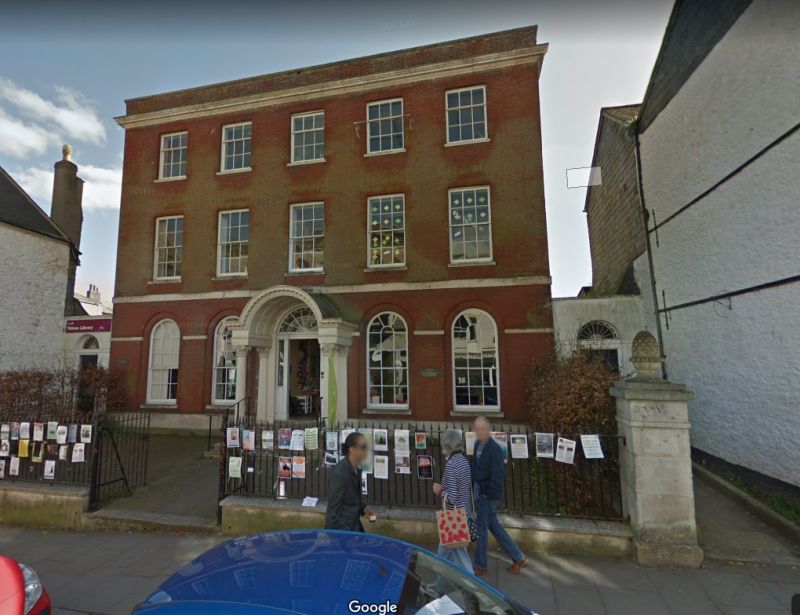 This is a 3-storey building, so I ended up constructing a separate 3rd storey and roof module, which sits on top of the original frame. This turned out to be a blessing in disguise since all the mechanisms are accessible by simply lifting the top section off. 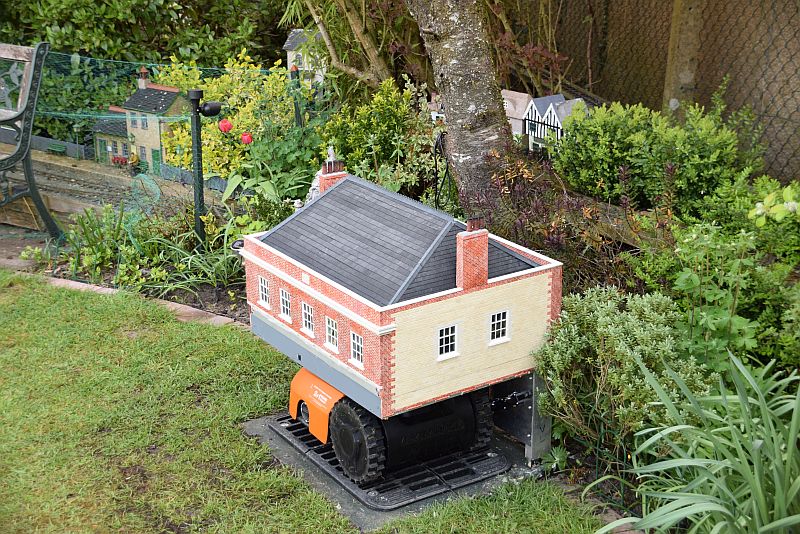 The walls are all good old 5mm foam board, easy to work and light - the lightness being important in regard to the lift up flaps. The roof is a composite of alumium and styrene sheet covered with black styrene slate strips. The windows and doors, chimney pots, tidge tiles and the top stone moulding on the front, are all 3D printed - the front door portico is a composite of, from memory, 10 components! 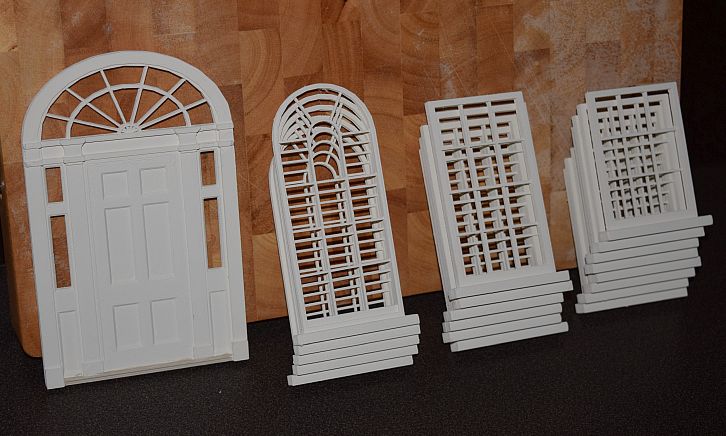 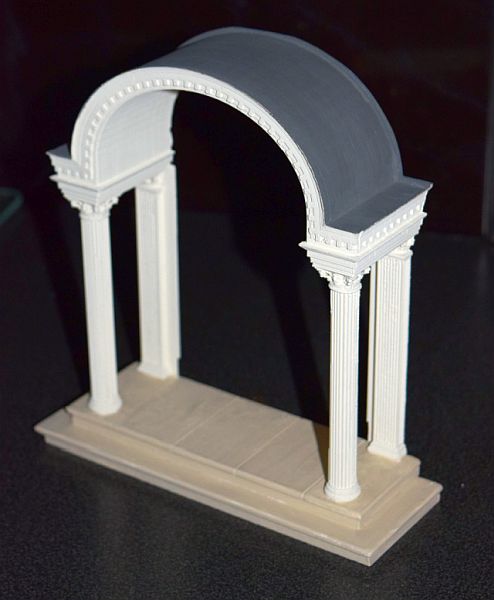 Scribing all the brick and stonework took over a week of finger-hurting work and never have I been so relieved to get something finished! 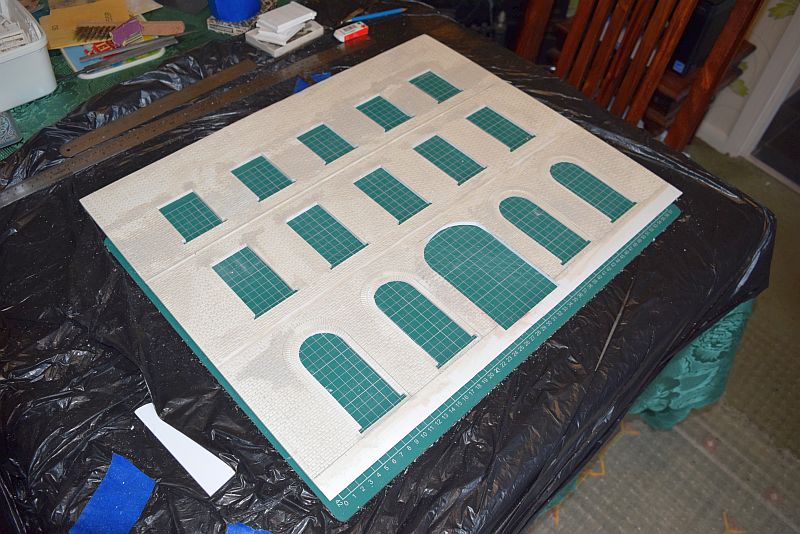 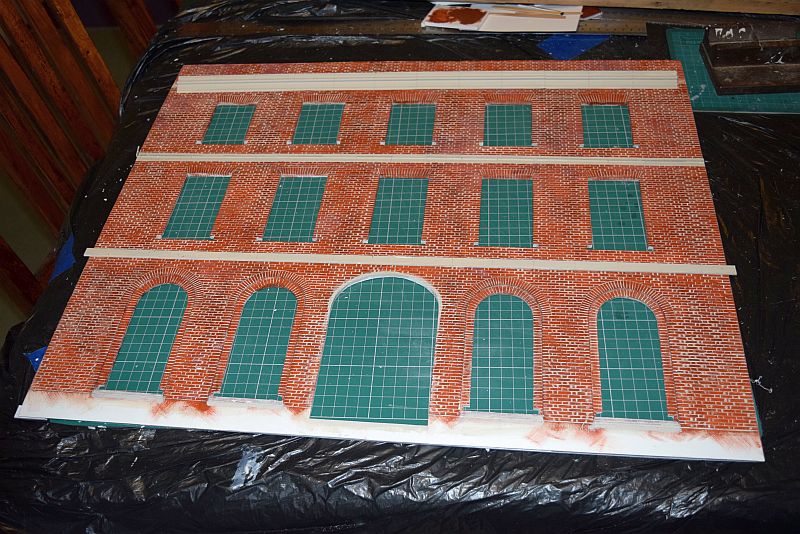 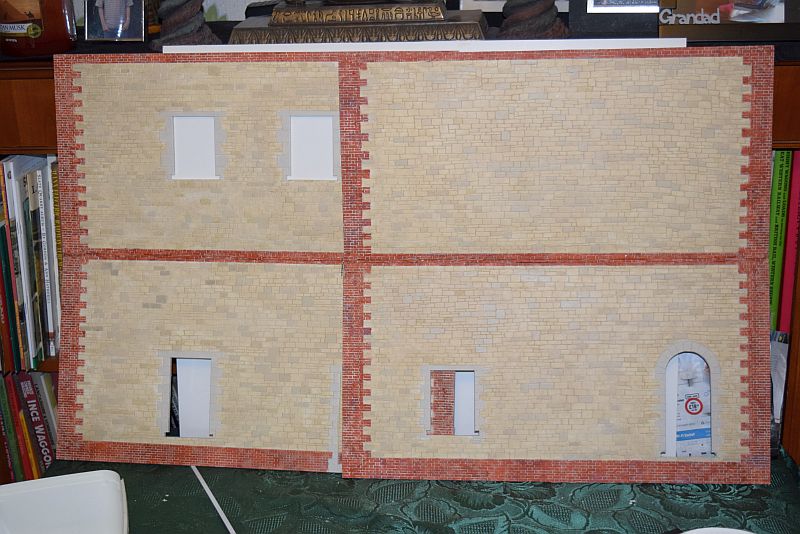 I spent quite a while mentally playing with ideas on how to actually open the doors, going round through servo's, gears, levers and windlasses, etc. Linear actuators seemed like a sensible approach but they are hellishly expensive for what I wanted. I discovered that Lego Technic do a small one but it didn't have anything like the throw I would need, but somehow from there I ended up looking at Thingiverse and found a design for a 3D printed linear actuator. It wasn't exactly what I needed but close enough that I could fairly easily modify it. The two side ones are identical but handed, the centre one follows the same principle but needs a much longer throw - about 280mm - so I got a piece of S/S square tube to ensure it wouldn't bend, the other two have printed push rods.The centre one is so long that it won't fit on my printer bed and I had to print the body in two parts and glue them together. 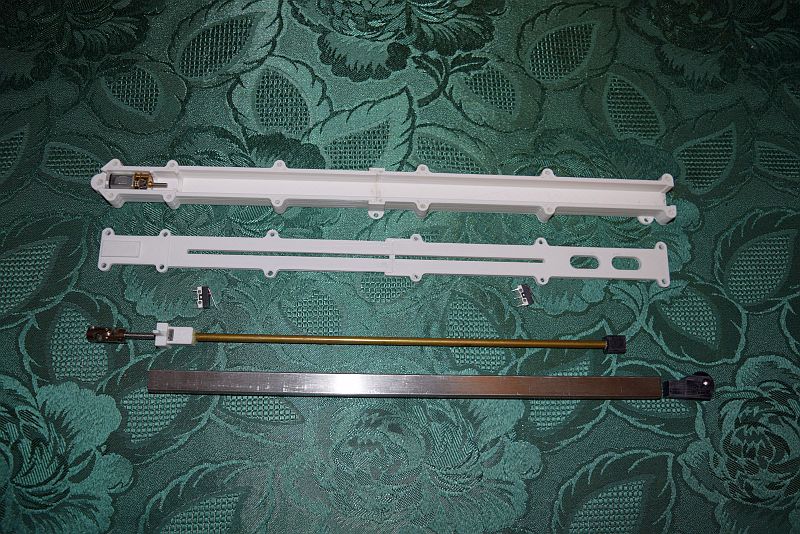 My original plan was to detect the mower's Li-ion battery voltage to trigger an RF Tx/Rx pair to open and close the doors as needed. The RF communication works very well, but the battery detection itself proved to be an insurmountable problem, so I went on to Plan B. The wi-fi connected mower's onboard software is programmed to start at a precise time, say 08-00, so I've used a small programmable time clock to open the doors at 07-59, the doors take approx 25 seconds to open fully, leaving a small margin before the mower moves. Similarly in reverse to close at the end of the mowing cycle. 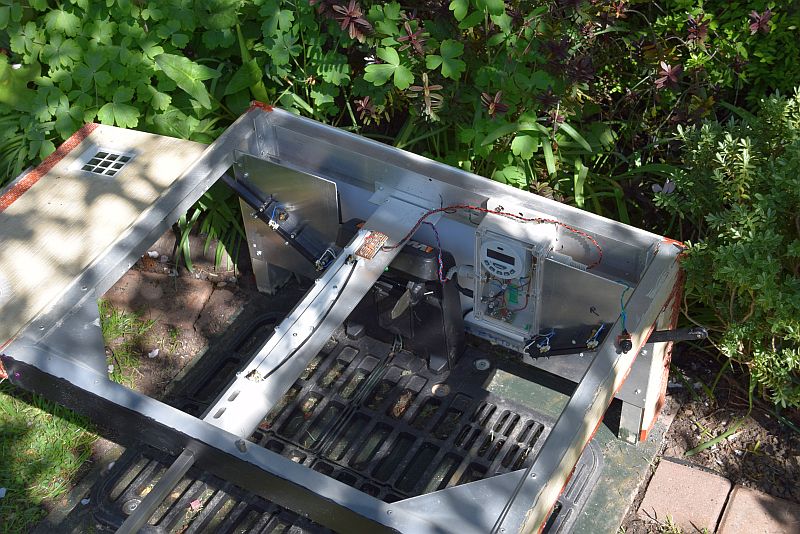 When you posted the first picture of "The Stately Pile" and I saw the portico and some of the building corner detail, I thought "He's up to something here". I was on the wrong track though. It was worth the wait to see such a brilliant effort, you deserve a rest after all that design/build work. Thanks for the explanation. Bet your out checking it for the first few days!!
Grant.
Top

Brilliant, Philip! My suspicions were aroused at the beginning of the video when I saw it belonged to the Mower family, but I had no idea it would be quite so sophisticated! I think you should send a link to the One Show producers. They are always on the look-out for 'diffetent' lockdown projects ......

Interested in your experience printing window frames.
I have considered buying one of the cheap 3D printers from eBay (much as Rik has done) with the primary intent of printing window frames.In my probable naivety I imagine they should be pretty easy to get a good result, being very low and flat with everything in contact with the bed, and also quite easy to model in the software being a flat sheet with holes in!
Top

This is well worth a second note of appreciation, I am so impressed with both the appearance and the mechanics of the whole project..... amazing!
I hadn't seen anything like it before, hence my original question. I am aware of the mowers themselves, but the combination of storage and charging in such a magnificent structure is something unique.
Absolutely brilliant.
The best things in life are free.... so why am I doing this?
Top

Interested in your experience printing window frames.
I have considered buying one of the cheap 3D printers from eBay (much as Rik has done) with the primary intent of printing window frames.In my probable naivety I imagine they should be pretty easy to get a good result, being very low and flat with everything in contact with the bed, and also quite easy to model in the software being a flat sheet with holes in!

Thanks.
Window frames can be as simple or complicated as you want them to be. This link, about halfway down the page,
viewtopic.php?f=25&t=11224&hilit=3d+printing&start=30
shows my first attempt at doing them - Being an idiot ( i.e ignorant fool) I started with sash windows !
Philip
www.tinyurl.com/philip-trains
Top

Speechless. I’m still laughing from the surprise. Thank you - I needed that.

When the house sides start to lift it is so James Bond.... Moonrakerish!
The best things in life are free.... so why am I doing this?
Top

Brilliant. It’s a lovely building too (both of them).
BertieB
www.toytrainsinthebackgarden.co.uk
Top

I was imagining the theme to Thunderbirds . . .

Users browsing this forum: musket the dog and 4 guests