I'm told that there's one such programme where the ENTIRE contents of the subject's house are laid out in a warehouse, presumably to make them realise what a lot of unnecessary junk they have.

The presenter would be SO confused if they tried that here, and probably even more confused by my explanations...

Sorry for the thread-drift - it's a fascinating project which should result in a unique and attractive loco, I look forward to seeing further progress Greg!

I think that knob will do the trick Greg, some suitable artwork with some isopon or similar and it can become a dead ringer

is this kleptomania a side effect of modelling, do you think?

Me too!
I have a dozen of them for my nails too! plastic lids are perishing after 45 years, but the tins are great.
Greg from downunder.
The Sandstone & Termite's website: http://www.members.optusnet.com.au/satr/satr.htm
Top

part 4
Now there was the frames and everything else under the baseplate…………….
From experience I know that everything down low needs to be STRONG or the first derailment will rip something off. So I avoid glue and anything flimsy. It’s screws and metal where possible.

I drew what shape I wanted for the ‘curvy’ frames to scale, then cut it out and stuck to 2mm styrene.
(BTW, I buy all my styrene (plasticard) in 5’x3’ sheets). Then it was down to the bench grinder for a few minutes and a few more minutes with a file and the shapes were cut out. Then all the ‘fancy’ edging etc to finish up with using 0.5mm styrene.

Unfortunately I had placed the wooden ‘underframes’ too far inwards so that I had to contact glue and nail these curvy outside frames on the outside of the timber and that meant the air tanks and truss rods and king pins and other paraphernalia were too far ‘out.
So I added another 10x5 mm wood and covered with 2mm styrene, to bring them out far enough to allow the truss rods to line up with them, outside of the ‘curvy’ frames.
I made the truss rods and king pins from 2mm brass rod.

I decided I wanted a more ‘back woods’ cab so I covered the sides with 0.5mm styrene which I scratched with a hacksaw blade to simulate wood grain. Spray painted brown and then washed grey acrylic over it. 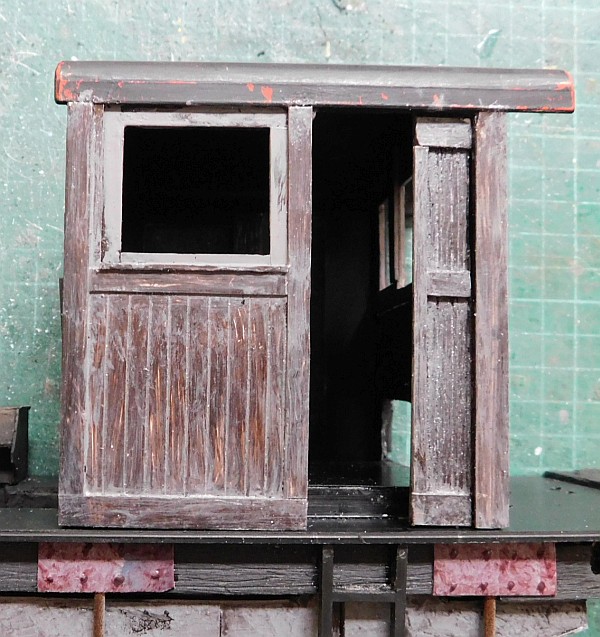 That looks good Greg. I do like the 'faded weathered wood' look, especially.
Philip
www.tinyurl.com/philip-trains
Top

SWMBO can never understand why I say that!

I'm glad I'm not the only one who does that. I see there are now TV programmes which get people to declutter their homes. No chance they would be welcome here. I'd spend the whole programme arguing why I should hold on to that box of wood offcuts or container full of secondhand screws.

SWMBO looked around my mancave (after she snuck in) and said "you will have to clean this out one day" my reply "no I won't that is the kids problem when I am gone".


Loco build is looking great there Greg as usual another fine bit of modelling.
Graeme
From the home of the Ringbalin Light Railway
https://ringbalin-light-railway.blogspo ... -page.html
Top

Progress continues and there is actually something to see.
So it was back to the boiler. I wanted to add as much detail as possible before I glued it to the baseplate.

The headlight came from the original Bachmann loco that provided the boiler. I had to lower the mounting and move it forward to overhang the boiler to clear the balloon stack. I tried a yellow led but it needed 20mA to be seen, so I used a warm white led with a couple of pieces of yellow cellophane around it to give a more ‘keroseney’ look. It runs at just 3mA – those white leds are super efficient. (The circuit that I use requires a very low current less than 5mA)

I haven’t decide on a rear light yet. I think there should be one but I don’t have one similarly shaped to the headlight. And then where would it mount? On the bunker or the top of the cab?

Back on the chimney, for the top ‘ember catcher’, I tracked down a small conical mesh ‘strainer’ from an old kitchen water tap for the top. I had some really fine brass mesh ‘stashed away’ and used it to form the cylindrical part. I turned a groove in the plastic to fit the brass ring I used around the mesh and then epoxied in place. (Whatever the plastic is, it sure smells when turning it, but at least it didn’t melt.) 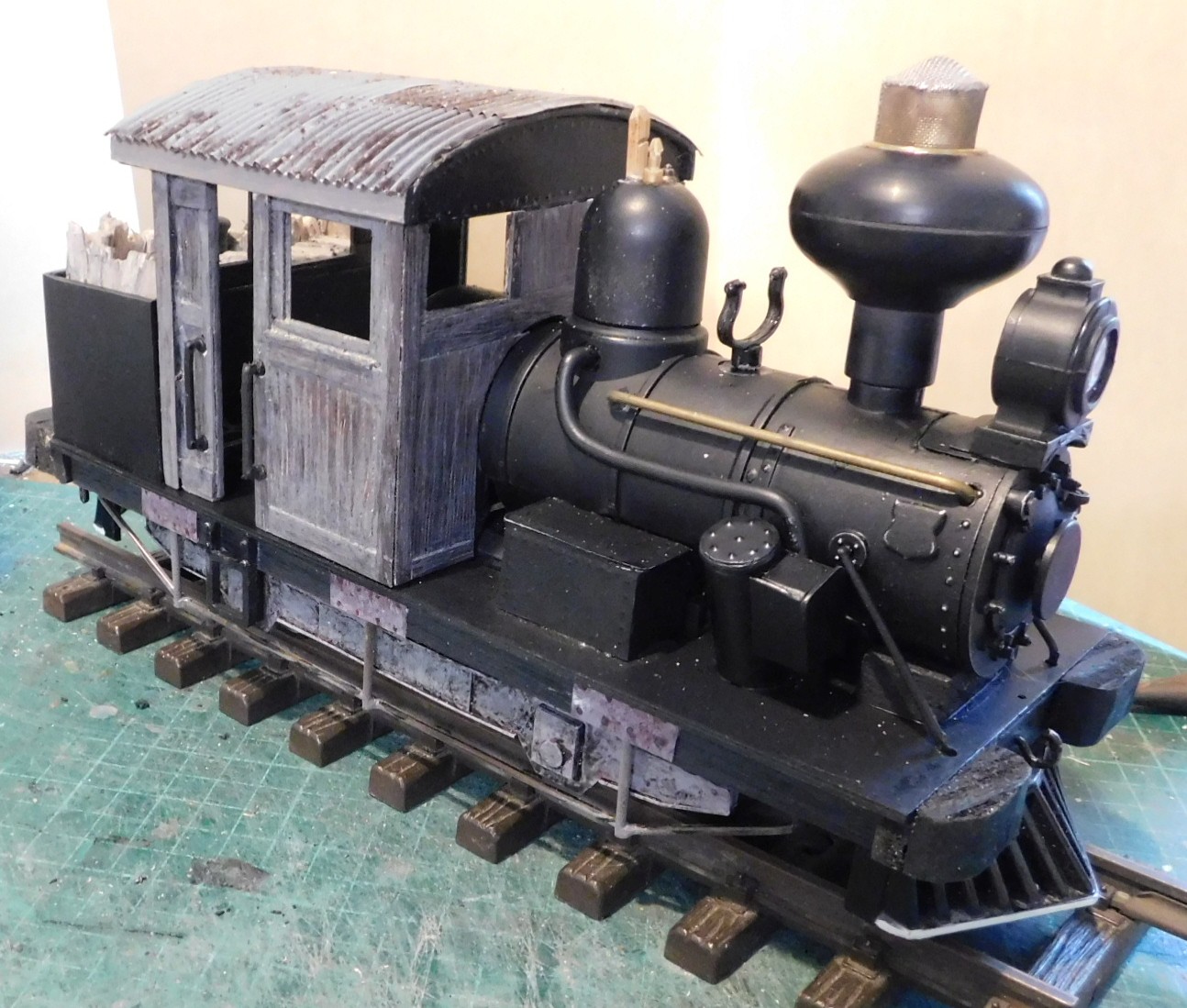 The cylinders are part of a pen barrel. I used balsa used for steam chests covered in 0.5mm styrene. End caps are styrene glued over steel washers to get true circles. The bottom, angled ends were filled with cork (it was easier to cut circular) and are screwed from below and epoxied to the base.

The air pump is from the same pen barrel which had ‘grooves’ already there! Not quite prototype but good enough for me.
Some 240V electrical wire became the steam pipes to the cylinders and some leftover handrails from various loco builds we re added.

Because of my hatred of bells on locos – bells belong in church towers – I left the bell support in place but removed the bell !

And I decided it would be worth the effort to make the front of the cab from (styrene scribed) wood to match the cab sides and get rid of the porthole windows. That meant filing the rivets and other details off and covering with the scribed and scratched 0.5mm styrene as described previously.
Then I decided that a corrugated iron roof was more in keeping with a bush loco appearance, so I used my usual method of using take-away aluminium baking dish and a paper corrugator, glued on with silicone sealant.
To simulate rust, I sprayed the aluminium brown then sprinkled swarf from around my drill press and lightly sprayed again to hold it in place. The swarf had bits of wood, metal and plastics. I had seen others use sea-salt but I had none. Then when dry, I sprayed grey and then later brushed off most of the swarf. 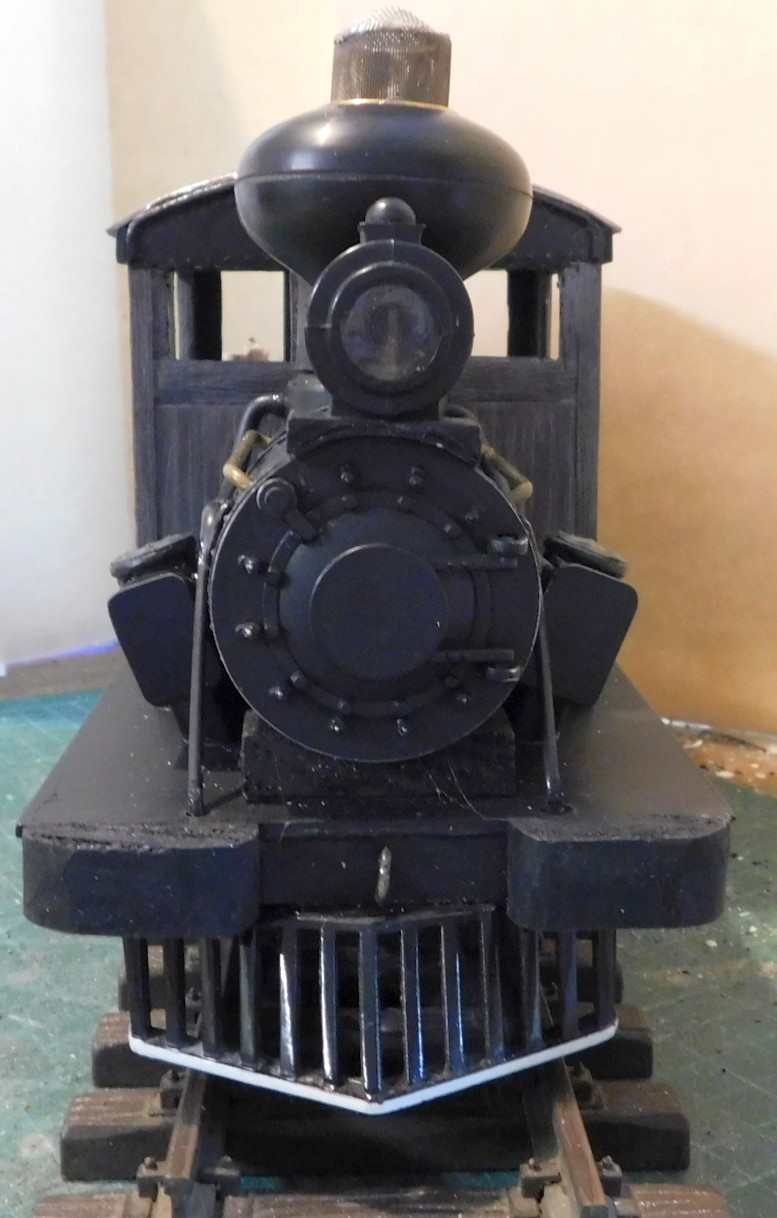 So now it’s onto the electronics.
Greg from downunder.
The Sandstone & Termite's website: http://www.members.optusnet.com.au/satr/satr.htm
Top

That's really come together well, Greg. It certainly captures the essence of the original. Your description of the techniques employed makes me hanker for the days before 3D printing entered my life. There's something really satisfying about re-purposing everyday objects to solve modelling problems.

Hats off to you!

That is a fantastic model in the true spirit of repurposing/recycling. I'll look forward to the obligatory video to see it in action. And of course, the chimney is 'the biz'

Amazing use of bits and pieces, well done Sir!


ge_rik wrote: ↑
Fri Feb 18, 2022 8:29 am
Your description of the techniques employed makes me hanker for the days before 3D printing entered my life. There's something really satisfying about re-purposing everyday objects to solve modelling problems.


I must admit that I do sometimes wonder if I make life harder for myself by using the printer instead of just grabbing a sheet of styrene. Then again, I enjoy the challenge of forcing the CAD and printers to do what I want, not what they seem determined to impose on me!!

Lonsdaler wrote: ↑
Fri Feb 18, 2022 9:18 am
That is a fantastic model in the true spirit of repurposing/recycling. I'll look forward to the obligatory video to see it in action. And of course, the chimney is 'the biz'

Thanks. Once I get the soldering iron hot and stuff all the wiring in, I hope there will be a running loco video 'real soon now'.
Greg from downunder.
The Sandstone & Termite's website: http://www.members.optusnet.com.au/satr/satr.htm
Top

I then considered the weight distribution between front and back. The chimney and boiler with the balloon stack, and the batteries in the boiler weighed 230g. The cab is more or less over the wheels, so the only weight at the rear is the bunker and electronics therein. They only weigh 100g. So I had to add around100g of lead at the back. I checked the weight distribution by ensuring the loco balanced at roughly the centre like this.. 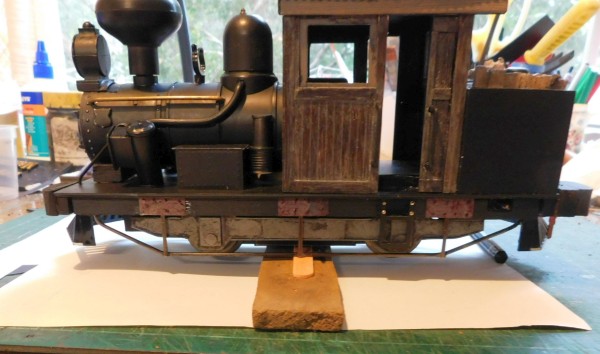 Now came the electronics.
For those of you not familiar with my method of RC, I’ll go into a bit of detail
I use Hobbyking 2.4 GHz controllers as made for model aircraft. 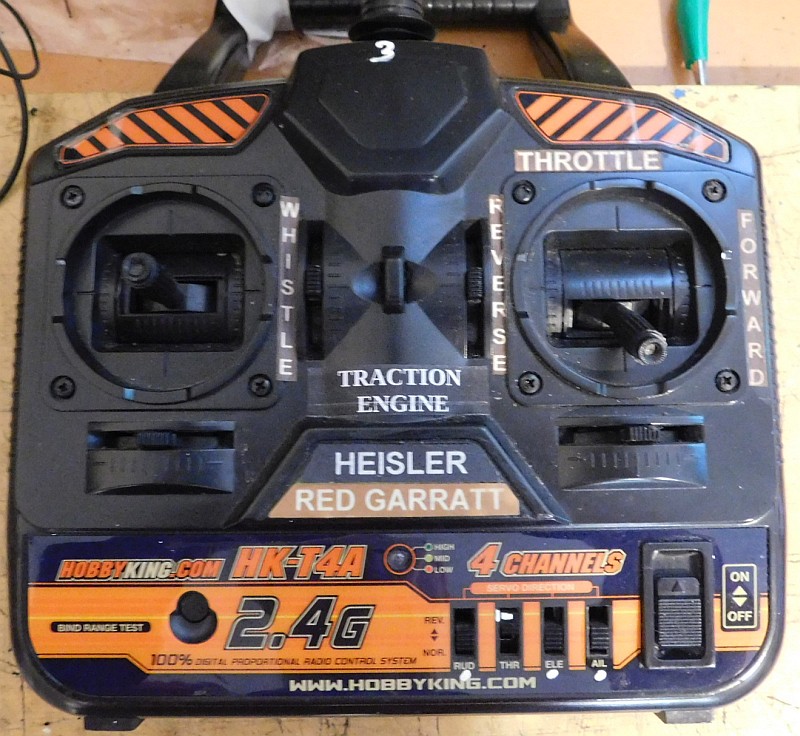 You can see I have 3 different locos controllable from this one transmitter – and I have 10 transmitters!

I had a couple of 18650 LiIon cells reclaimed from an old laptop. I checked that 2 cells, with around 8V, gave a suitable speed. (see post 1)
The Hobbyking receiver and batteries are pushed into the boiler once the cab is lifted off. 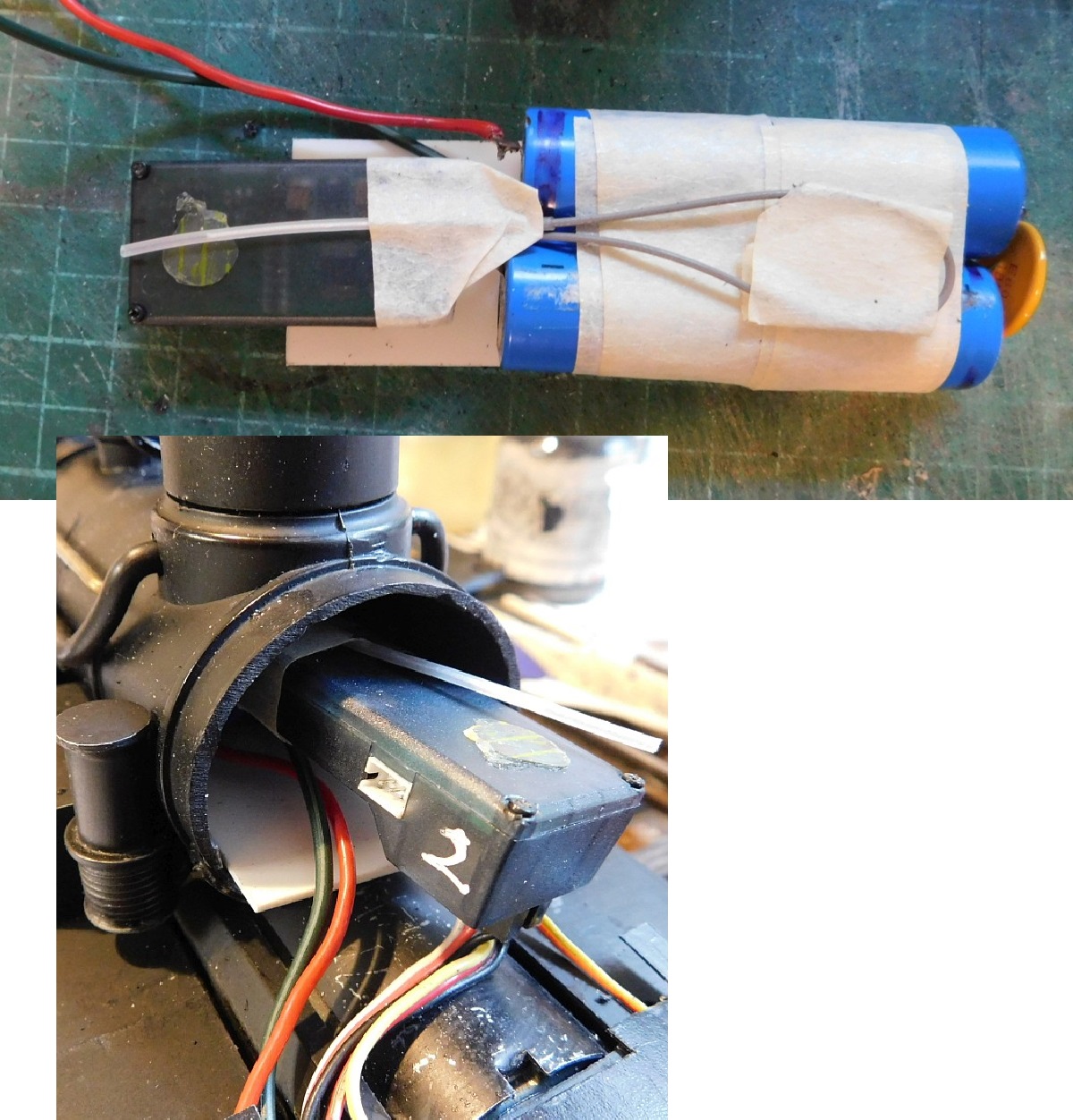 There is a 3.7A solid state fuse (Polyswitch) mounted on the batteyr, to protect against short circuits. Charging is by connecting alligator clips to two ‘studs’ under the rear buffer beam.

The electronics is then pretty much all my own design.
I use a Hobbyking ESC for speed control and it just plugs into the ‘throttle’ output of the receiver. It has an in-built undervoltage detector to protect the LiIon batteries from over-discharge.

The rest of the electronics is based on a Picaxe programmable microcontroller – I know they are old technology, but I understand them and see no reason (yet) to learn about Arduino et al. The small picaxe 08M2 type has just 8 pins, runs off 3-5V and importantly has a white noise generator and PWM speed controller built in (but not used in this case).
Direction control is via a 5V coil, relay. I use the picaxe to decode the receiver pulse stream for the right Tx stick which I use for changing direction. It then picks up or drops out the reversing relay. The headlight control is also done here. (there is no rear light yet)

The same picaxe produces the steam chuff sounds. It takes the motor voltage as input to change the chuff rate. The chuff is just a white noise (generated by the picaxe) filtered and amplified by an LM386, 2W amplifier.
The chuff rate for a Heisler is still an unknown to me – I think the gearing is about 2:1 so it should chuff at 8 chuffs per wheel revolution I think. I’ll try and track down some videos.

And there is a sound to tell me if the Rx has lost the transmitter input too!
Unfortunately the are not enough pins on the Picaxe to let me have a whistle sound.

All this electronics is stuffed into the bunker – the wood load lifts off for access. 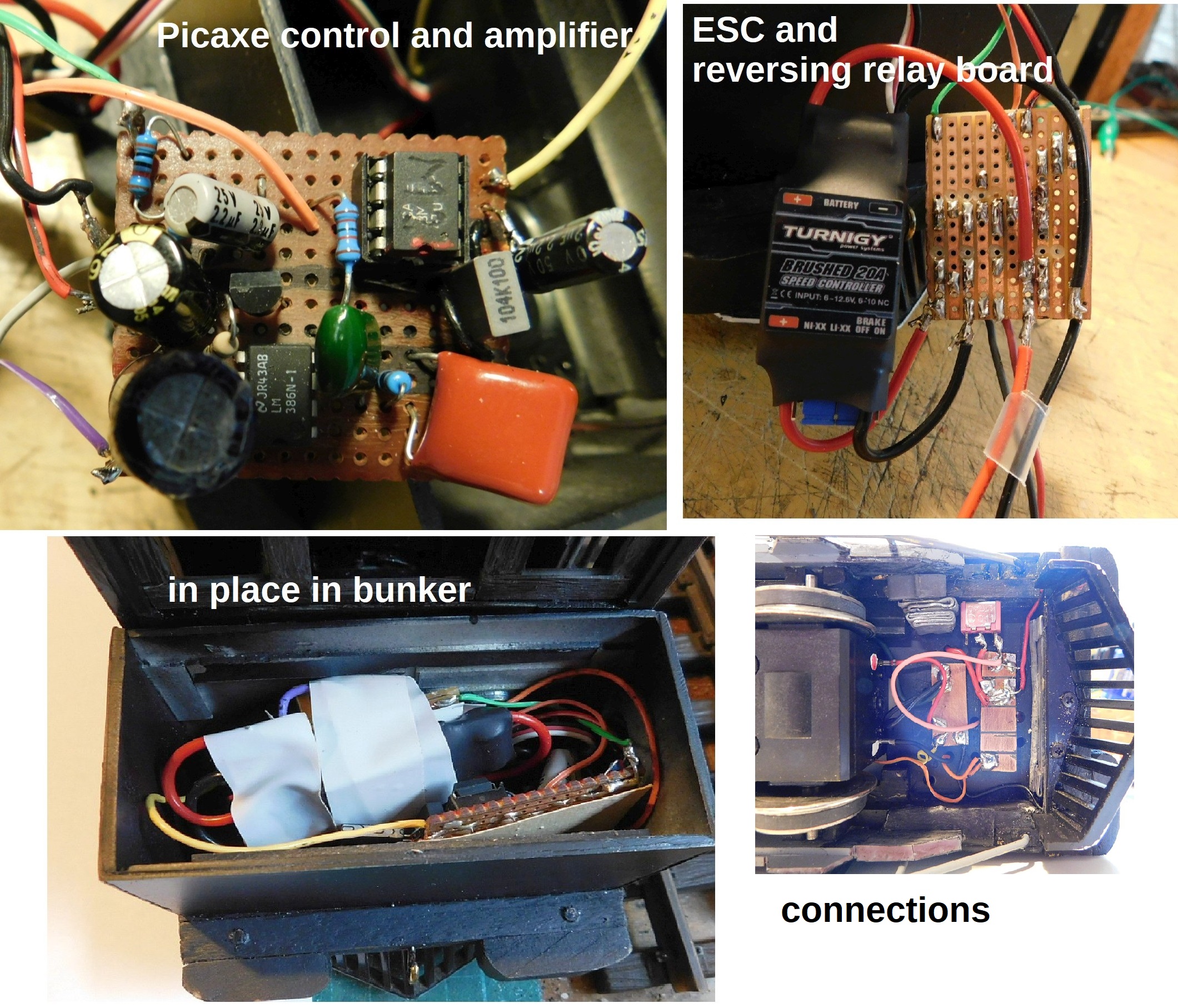 The speaker is mounted in the bunker facing into the cab and is a tiny speaker made for laptops. 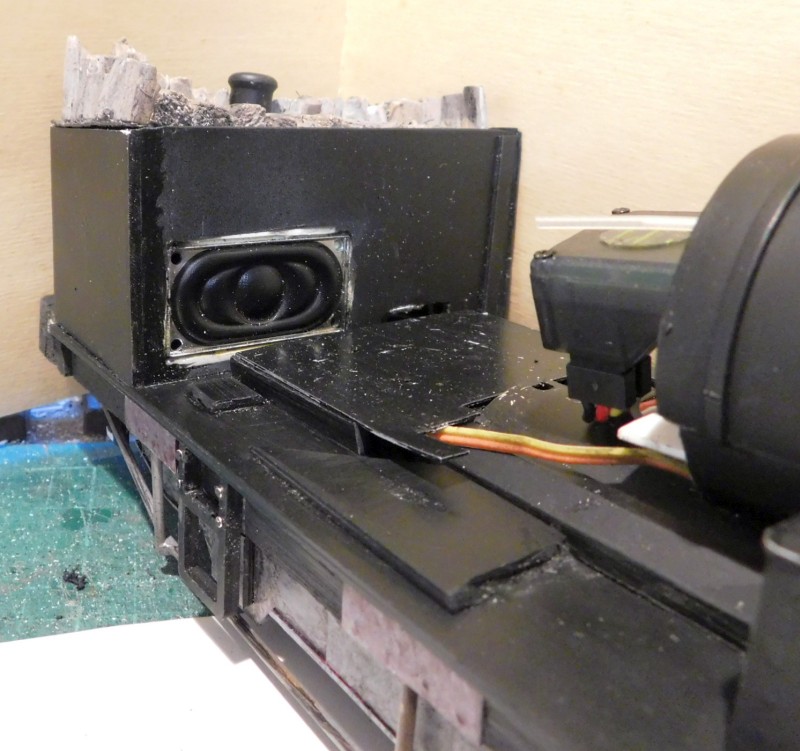 And the amazing thing is IT WORKED FIRST GO.

I just need to add a driver and fireman, and maybe a rear light, and the lettering/numbering and it will be done.
Greg from downunder.
The Sandstone & Termite's website: http://www.members.optusnet.com.au/satr/satr.htm
Top

All looking good now and congrats on getting it all to work first go. That is always satisfying!